Israel sweeps up in Kupiškis

This weekend saw an historical clean-sweep by Team Israel with their women taking all three medals and the men taking gold and bronze. 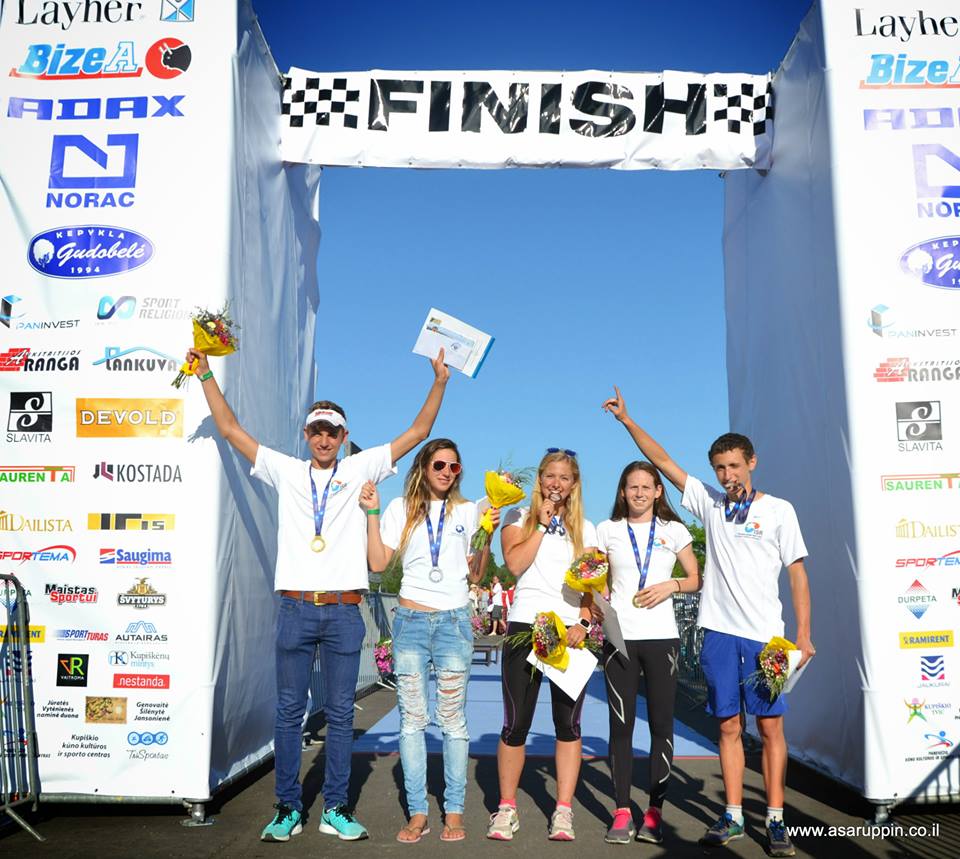 The athletes arrived at the venue to be told that the water was fresh, at 16.5C but that the air was a lovely 25C. The start was a clean one and the swim was a one-lap 750m course. 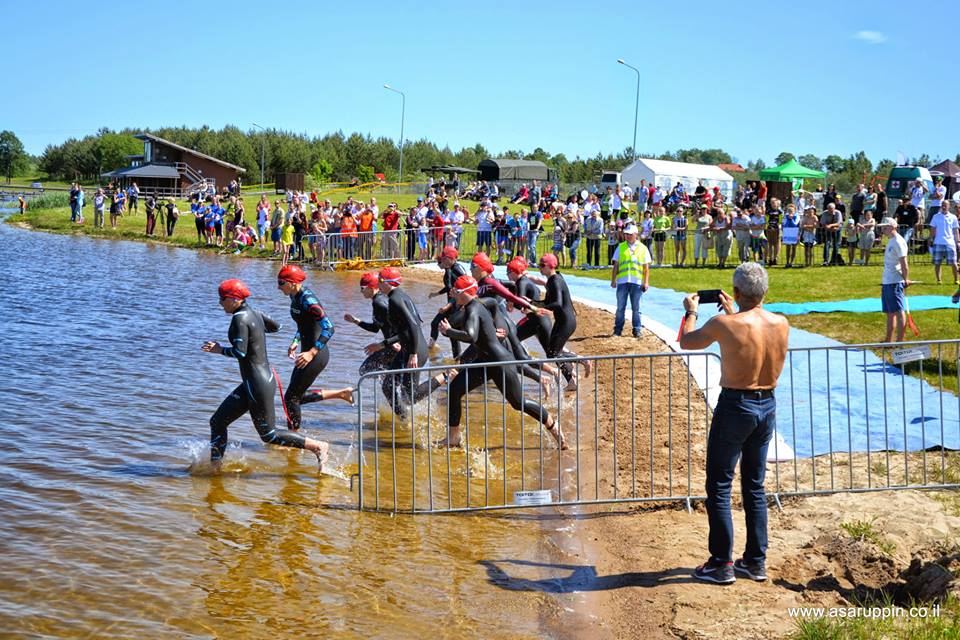 It was Noam Fishman ISR who stormed to the front in the swim and left the water 24 seconds ahead of the other athletes.  This great first leg put her into a dominant position on the bike. The Israeli athletes have all been training hard and their coach, Uri Zilberman, has certainly showed them how to get more speed in transition. They flew through transition and with both Lianne Witkin and Yuval Gome both showing great pace on the bike it was not so long before they caught up with Fishman. 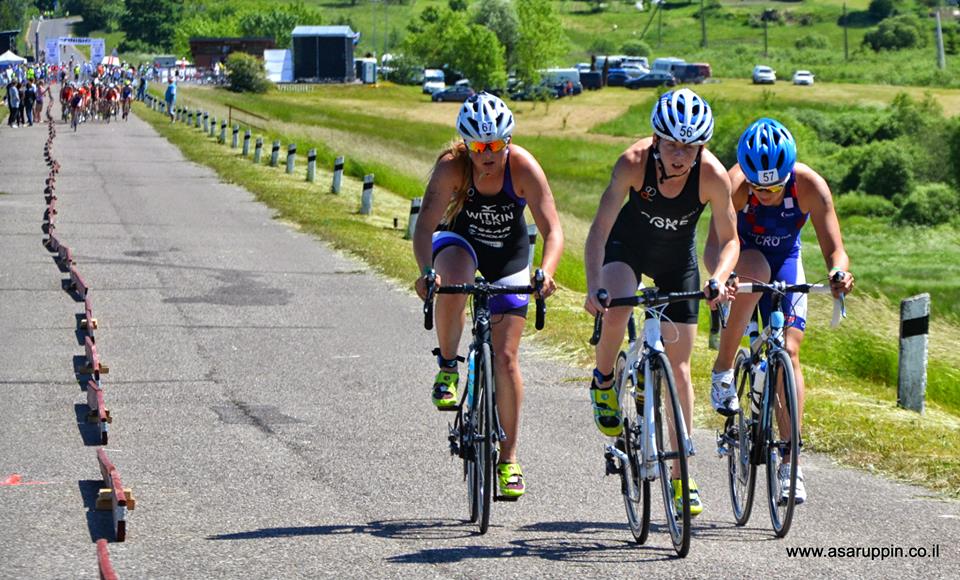 Working hard together they pulled away from the chase pack and for them it was a strong start to the run. Gome, having worked hard on the bike must have welcomed the fact that all three of them could chain-gang together after her swim but the concern was that she could she have used up too much energy and would her run fall apart ? Another blisteringly fast transition saw her take off and post a 19:47 5k. 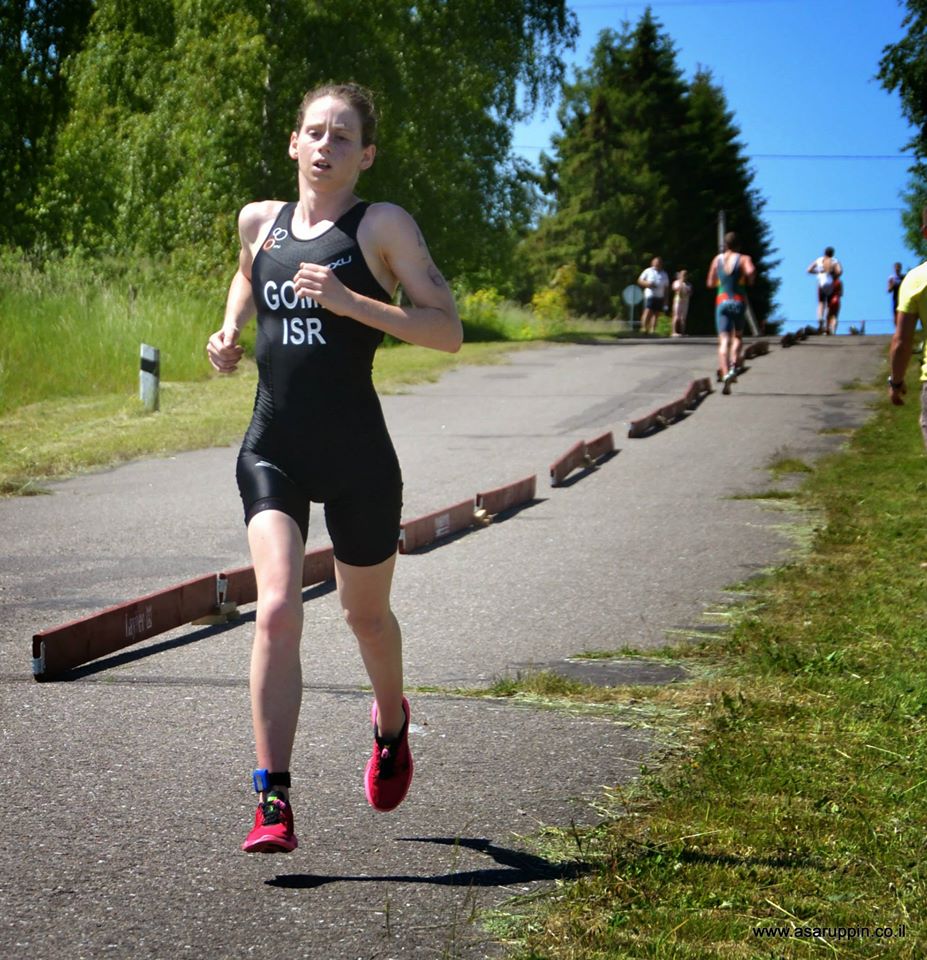 This was more than enough to take her to victory. Her winning time was over a minute ahead of Fishman who had the best birthday present ever by taking a solid silver. Third place went to Witkin. For her it was the first time on the circuit for a podium and well-deserved bronze.

After the race Yuval was jubilant, “after two years I was really pleased to be able to come back and race in Kupiškis. The Organization was perfect and the bike course was very technical. Elisabetta Vitasovic from Croatia, Lianne, Noam and I worked together on the bike but the real race started out on the run. I was very happy to win the race but imagine how delighted I was that I could share the podium with my friends from Israel.” 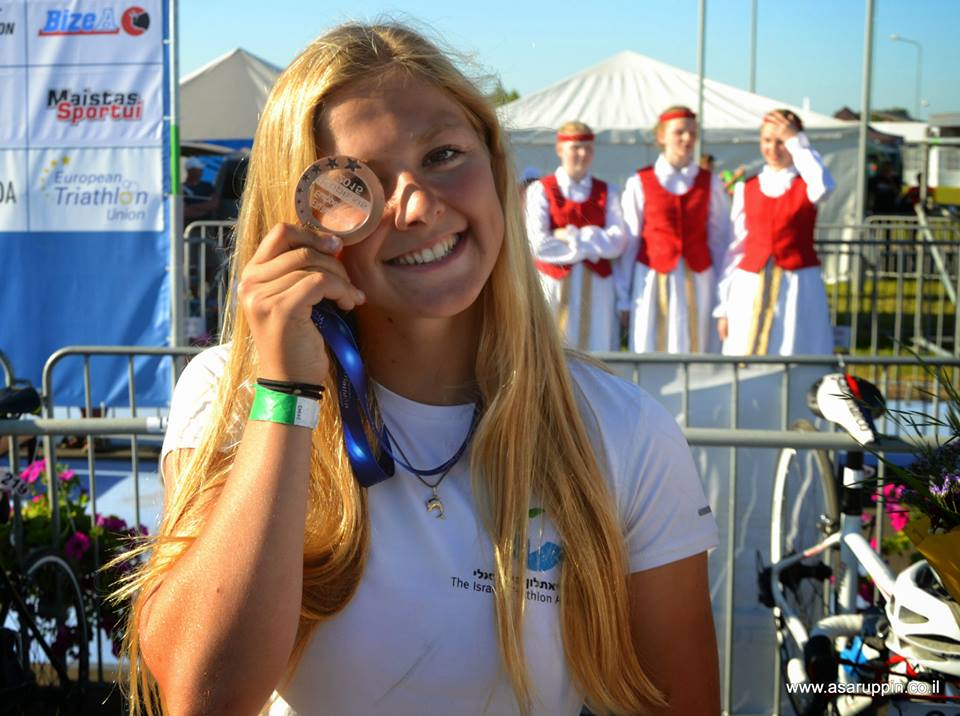 For Witkin, the thing she remembers most if the uphill sections on the bike, “uphills on the bike ride and on the run as well. We went up that hill overall 7 times; 5 on the bike and 2 on the run. It gave something interesting to the race, because usually there is a flat course but here in Kupiškis it was Technical and interesting! I loved the great welcoming ceremonies; the opening and ending of the event. The race was good for me. I started the bike before Yuval and somewhere in the first lap she caught me and then we worked together until we caught Noam who, after her swim, had a one minute advantage on us in the beginning of the bike. Then we all went out off the bikes together and the competition was between us at the run…” Anyone watching the race would have been entertained to a great battle and then a well-deserved set of medals.

The men’s race was a great battle from the moment the athletes hit the water. Michał Oliwa POL led the swim with Omri Bahat just on his toes. 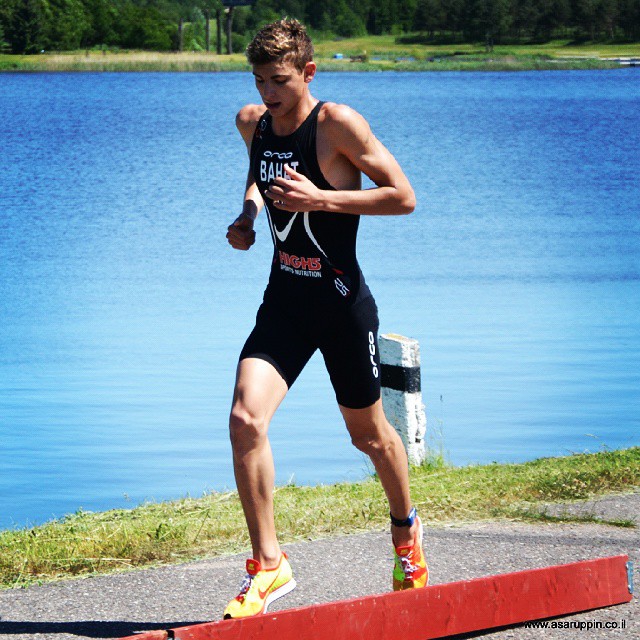 They had a comfortable run into T1 but were followed by Turkish athlete, Gültigin Er whose swim pace has taken him to the front of the pack on many races. He had Jeffrey Reijnders with him and then followed a steady stream of athletes leaving the water. It was once more the Israeli team that gave a masterclass in transition speed as Bahat sped through to the mount line. Behind them came Ran Sagiv and Mikita Katsianeu and it was Sagiv who tried to push the pace, “I swam very well and right from the start I was with the leaders. On the bike I tried to create a group that will push hard to close on Omri but it didn’t work and we just waited for the run.” 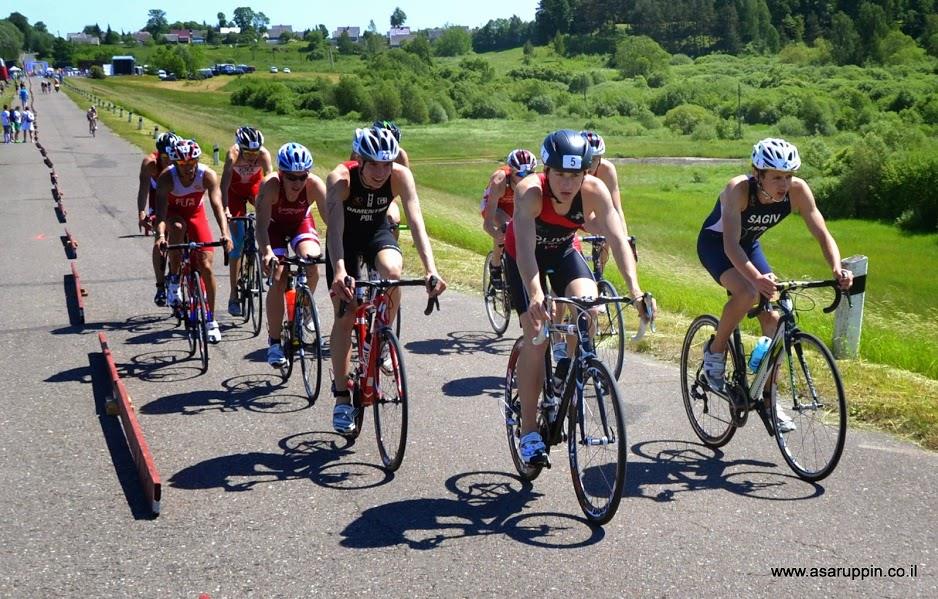 For Katsianeu, “There was a strong fight during the race, I tried to keep with Omri Bahat but I could not and that let him pull away during the bike.” 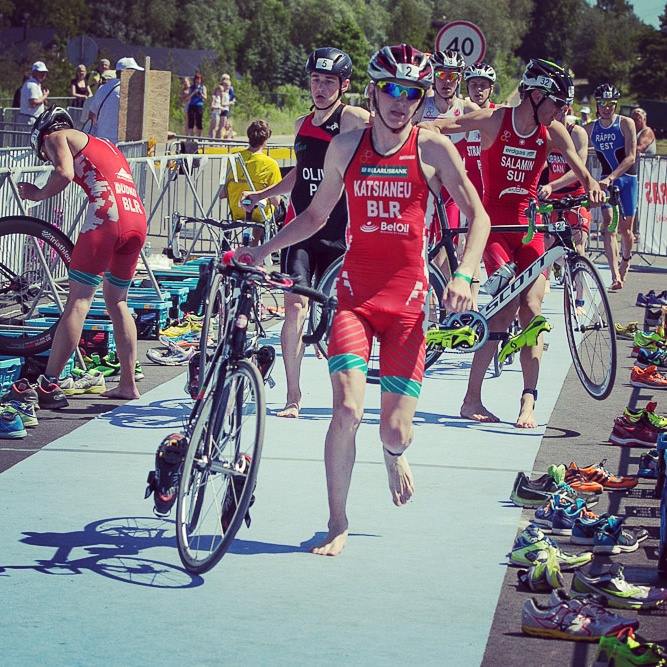 T2 came and went swiftly. Bahat came and went quicker than anyone else, possibly sensing a victory. He almost cruised to the gold and afterwards said, “Actually the course was very difficult and exiting.  I felt very good from the beginning so had a good swim and a perfect transition to break away from the rest of the field and managed to keep the lead until the end of the day. And of course all the team had a great day out there, so we did so great. Thanks for the support from everyone this week. Thanks for my family and coaches and all my sponsors!!!! And of course to my best team road runner” 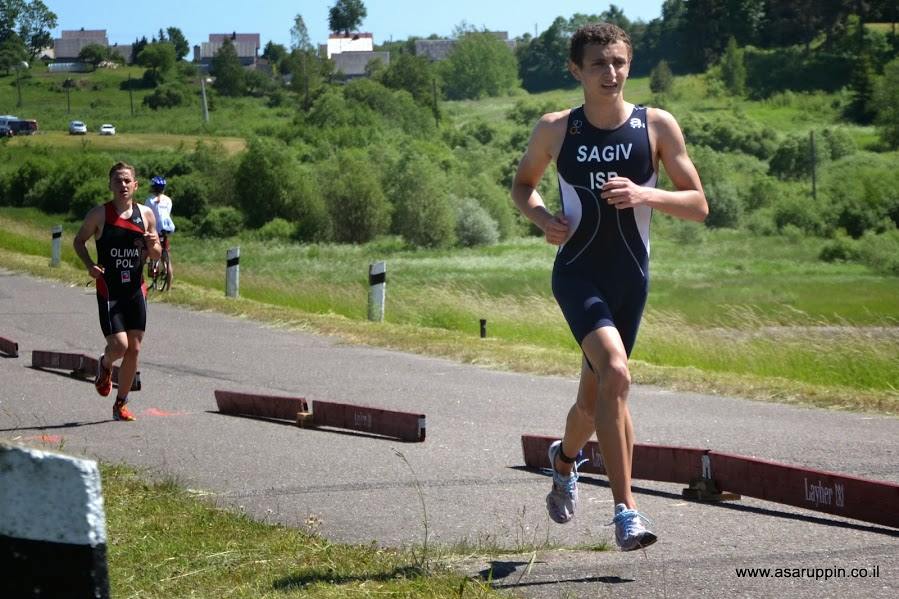 The silver medal battle was won by Katsianeu.  “During the race, my opponents have worked very hard, so I was happy to work with them and it allowed me to take second place!” The bronze went to Ran Sagiv, “in the run I pushed the pace with Mikita on the first lap but eventually it wasn’t my best day and the best I could do was the third place. I was so happy with the performance of all of the Israeli team, the boys and the girls; it was so exciting to hear our national anthem twice and to see the Israeli flag raised 5 times. Huge pride. The Israeli team is just getting better and I hope we will show it in Geneva!”

For President, Yuval Hets, “The Israeli NF decided to have Vienna and Kupiškis ETU Junior cups as the Israeli criteria to ETU's European championship for the juniors. Kupiškis as a favourite destination also in 2014. As a former Natiopnal Federation in category 3, we found that we may still contribute to other National Federations by being involved in developing-countries events. The competition between the Israelis triathletes themselves was in order to achieve the criteria, while winning was a task as well. We understand that in order to achieve a medal, you have to work hard and feel the hunger to another one. In Kupiškis we succeeded. Now our team is hungry for more. I wish our young athletes will learn this lesson and it will motivate them to work harder.” 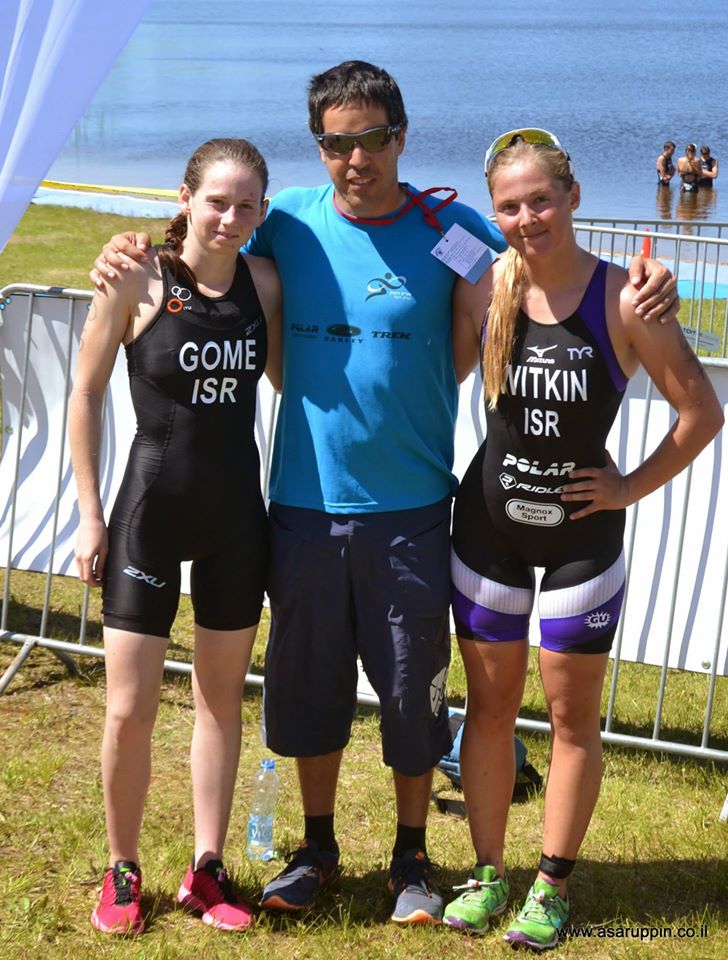 Big thanks to Uri and Harel Zilberman from the Israeli Triathlon Federation for the photos of his women’s team.