Derron and Coninx with superb gold at European Championships in Valencia 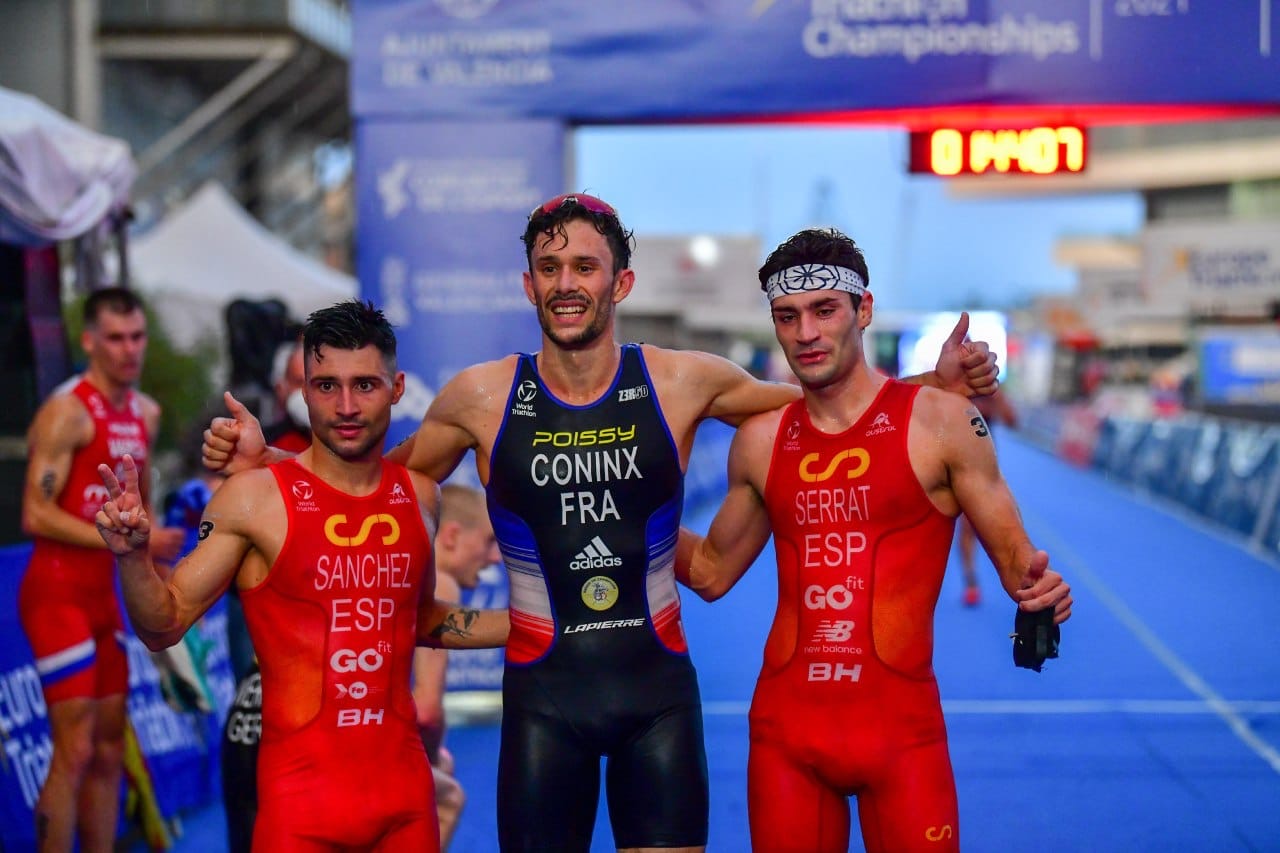 A marvelous day of Triathlon at the European Championships in Valencia. Indeed beautifully organised and orchestrated by the Spanish Federation and the Loc at the Marina area that was the perfect spot for such a great event. 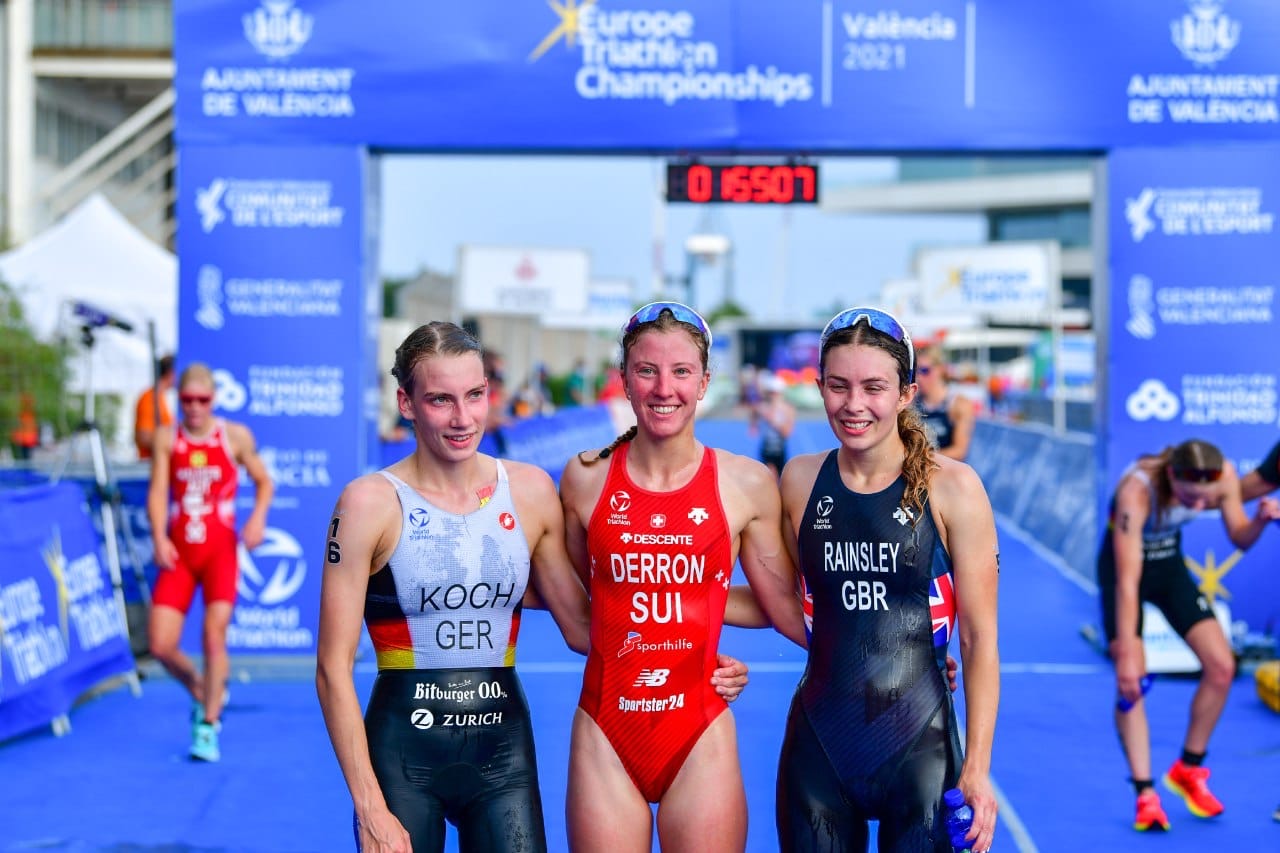 After the para triathlon and the AG sprint of the morning, everyone focused their attention on the élite races. First was the one of the Élite Women at 3:15 pm and then at 6 pm local time the Élite Men. 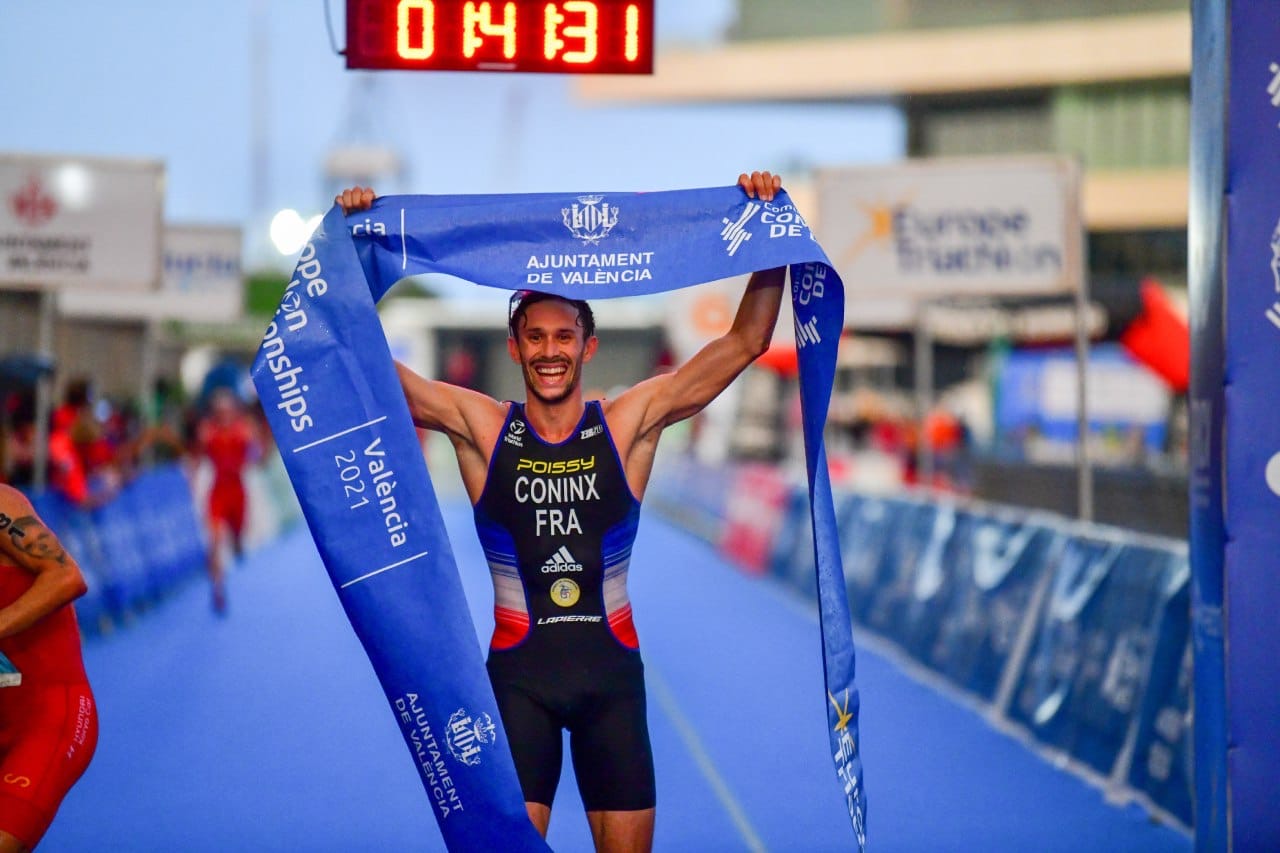 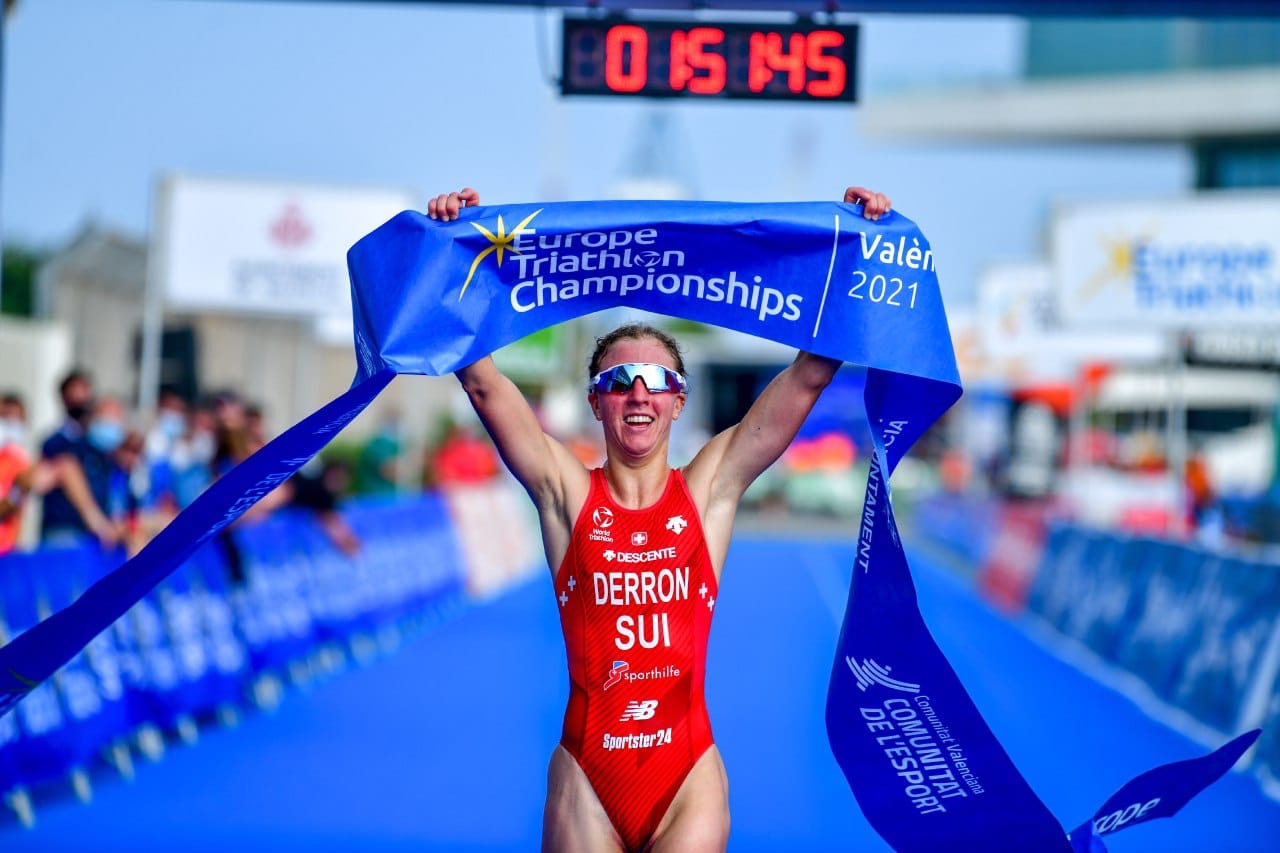 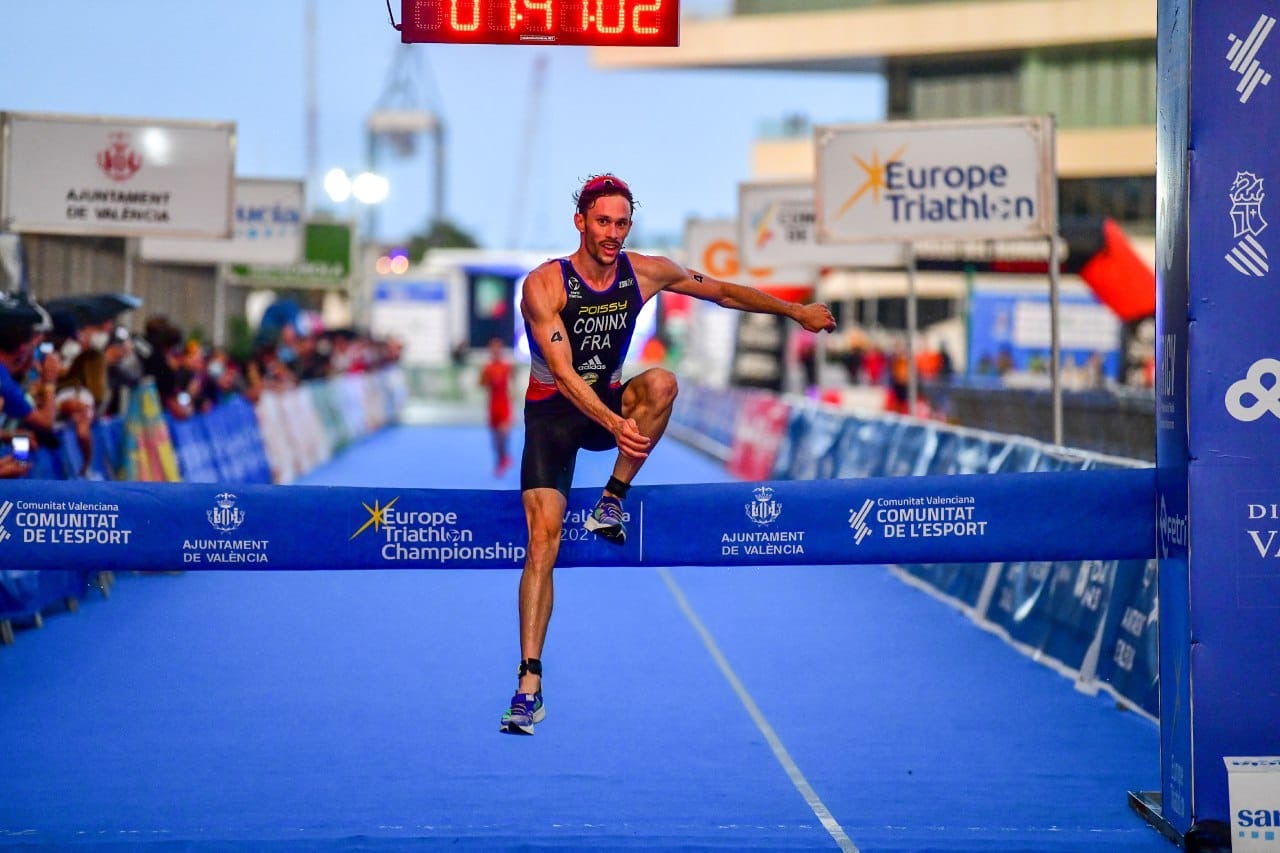 In the Élite Women an incredible swim of Bianca Seregni (ITA), as we know from previous competitions, she performances amazingly. Her swim brought her immediately in the lead. She did an easily transition and took the lead on the bike. After the first lap the chasing group of about 15 athletes caught her up. In the group: 4 Brits, 3 Germans, two Italians Spimi and Seregni, then  Audrey Merle (FRA), Melanie Santos (POR), Roksana Slupek and Paulina Klimas (POL), Julie Derron (SUI), Lena Meißner (GER), Lotte Miller (NOR) who really pushed hard in the front of the pack most of the bike, and  Rani Skrabanja (NED). The chasing group for the flat course could only try stay not too far but couldn’t do anything better than follow since the leaders were significantly ahead. After T2 Julie Derron Koch and Rainsley took the lead  but didn’t broke the group following immediately. Behind fighting Merle, Seregni, Klimas on her shoulders with also Waugh and Meißner. 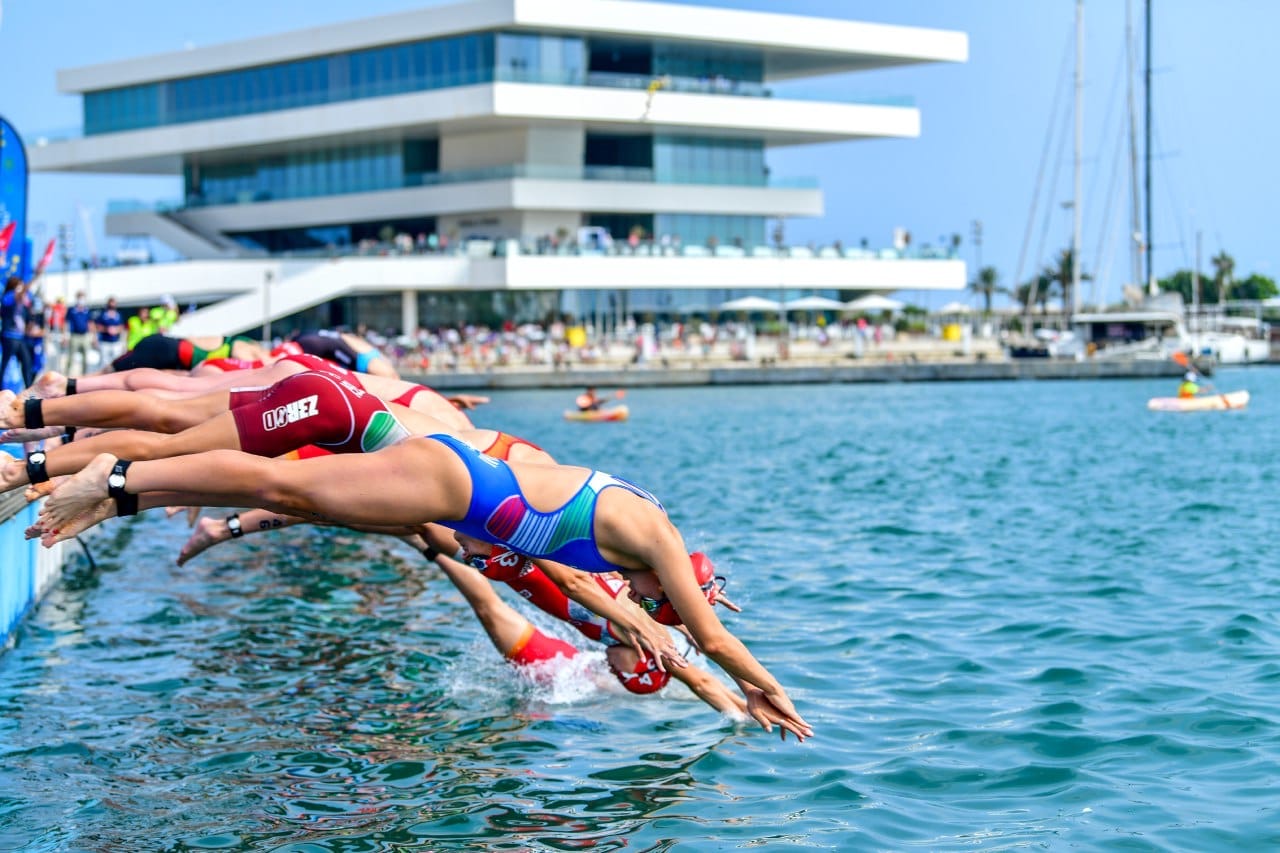 The fight was anyway between Derron and Koch then Rainsley. Seregni and Meißner were back. Then Klimas and Merle. Derron then pulled away and Koch was chasing while Klimas moved rapidly in third trying to leave Rainsley behind after 5k. Julie Derron was unstoppable today and imposed such a strong pace that behind Koch could only to defend her silver from the coming chasers Klimas and Rainsley. Julie Derron with an immense running performance crossed the blue carpet and was crowned European Champion in Valencia in 1:51:44. Silver for Annika Koch (GER) and in a tough sprint finish the British Sian Rainsley took bronze leaving behind Paulina Klimas who missed for a few seconds a European medal which could have represented her best result ever. 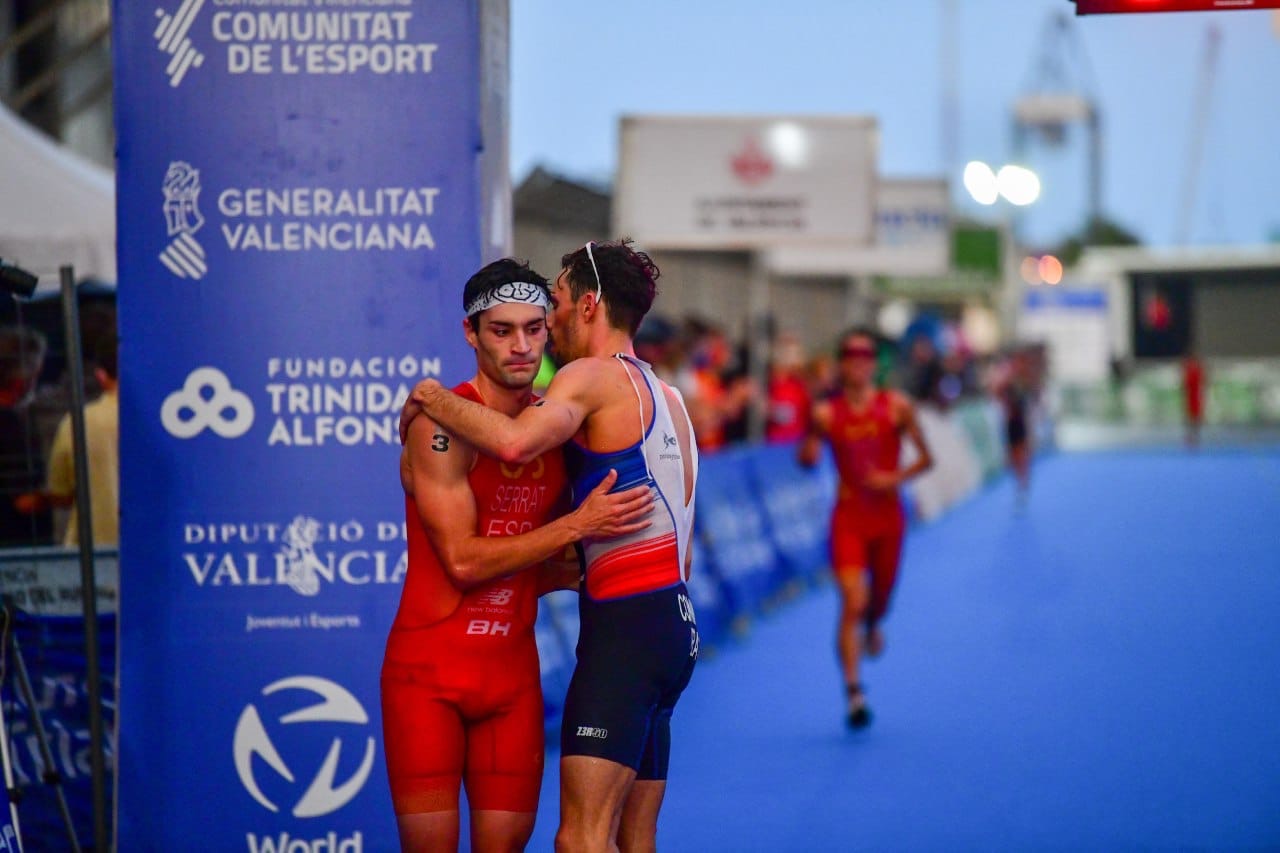 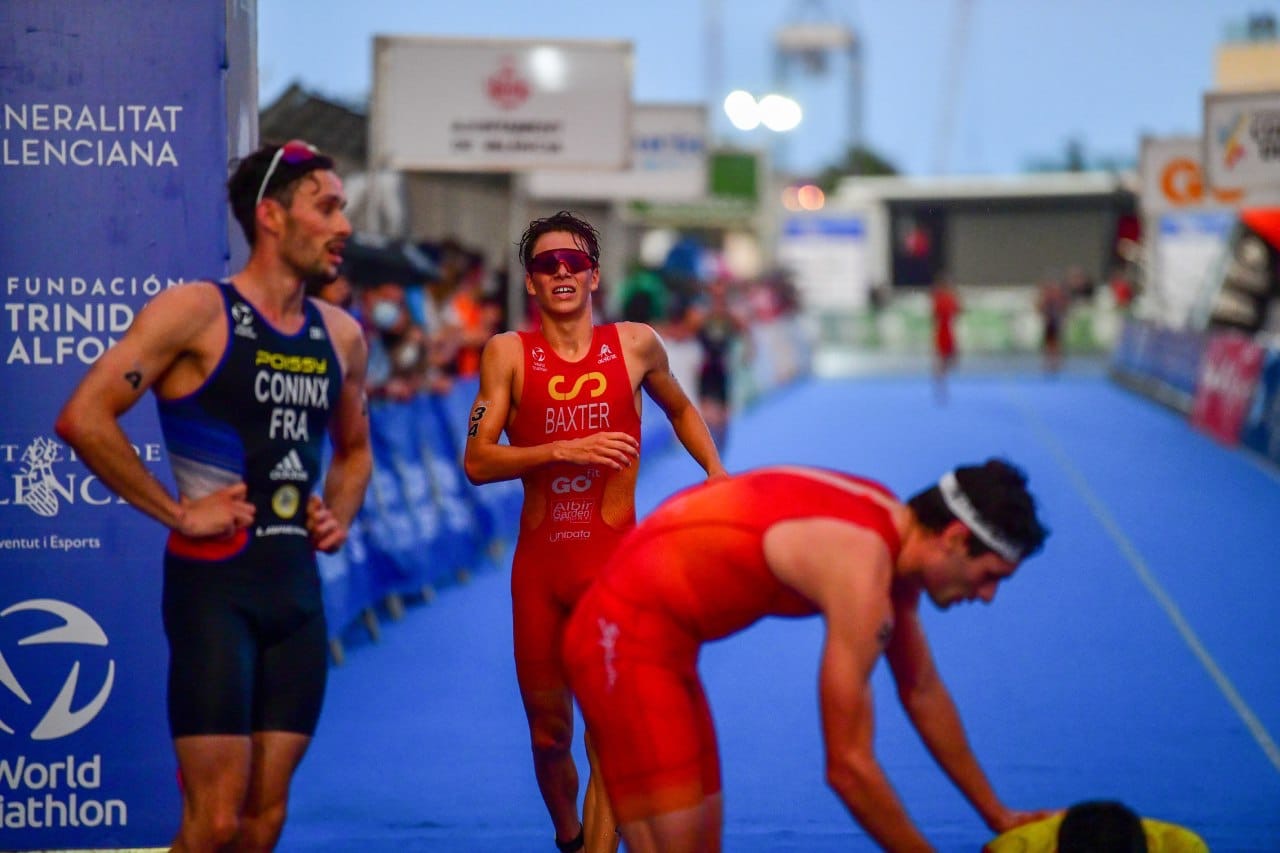 In the Élite Men what an epic performance for Team Spain who managed to get silver, bronze and the 4th position! 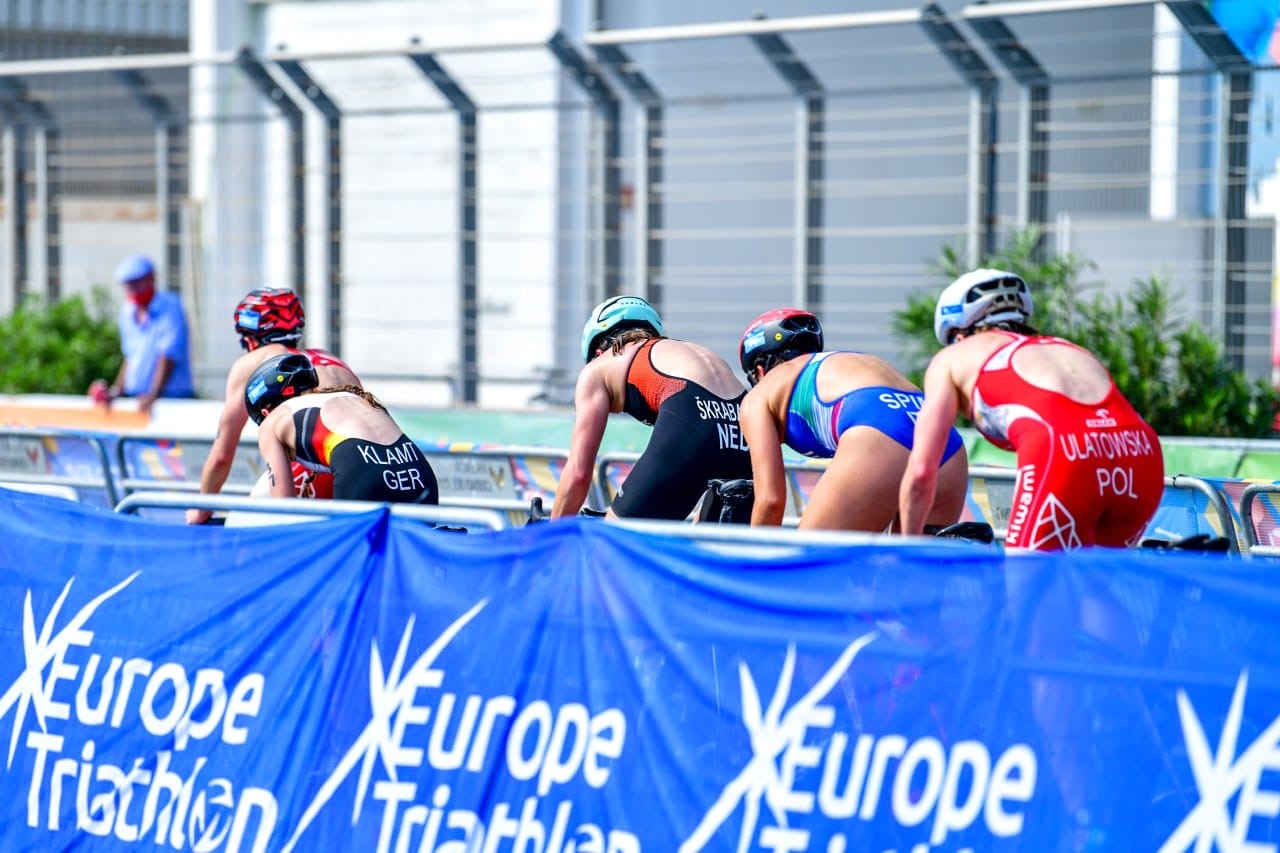 An impressive line up of athletes racing for the Continental title. After the swim the leading athlete is Richard Varga (SVK) followed by Miguel Tiago Silva (POR) and Alberto González (ESP). Everything was on full gas and after T1 a huge group of about 25 athletes formed. The Norwegian athletes were trying to break away. While the weather was rapidly getting worse as it started to rain and the roads became more slippery. The many dead turns and the technical sections became more dangerous as in fact some crahes unfortunately happened. Some good attacks came from the chasing group to try to catch the leaders however, the huge pack reached T2 and the final run started. This was the moment where to show who was going to take the lead of the competition and hope for the best. Brifford (SUI) and behind on his shoulders Coninx (FRA) and Azzano (ITA) just had a very fast transition. Then a group of 7 leaders formed with Swiss Brifford, Fridelance, 3 Spanish Roberto Sanchez Mantecon, Sergio Baxter Cabrera, Antonio Serrat Seoane and 2 French Dorian Coninx and Tom Richard who were pushing incredibly hard. After 4k the leaders were still the two Spanish Sanchez and Serrat and the French Coninx. And just behind Richard and Baxter Cabrera. The third chasing group was not able to get them. The final and decisive fight was among Coninx, Serrat and Baxter. None was leaving any space to the other. Then when arriving at the turn around area, 2k and a half to go, Dorian Coninx decided it was time to push more hard and leave Spaniards behind. Roberto Sanchez Mantecón tried everything, and managed to go for silver, leaving behind team companion Antonio Serrat Seoane who came in third. The 2021 European Champion crowned in Valencia is French Dorian Coninx, second place for Spanish Roberto Sanchez Mantecón and bronze medal for Antonio Serrat Seoane. 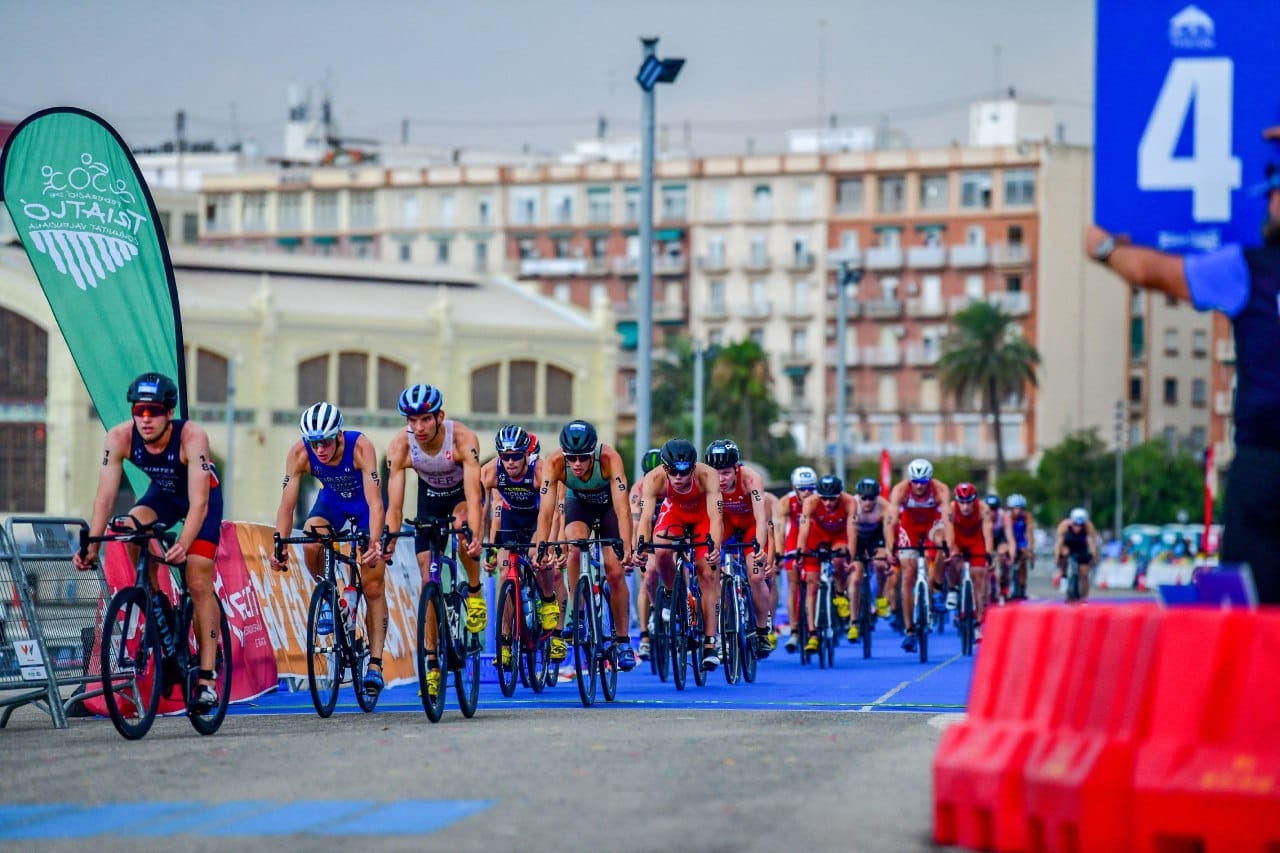 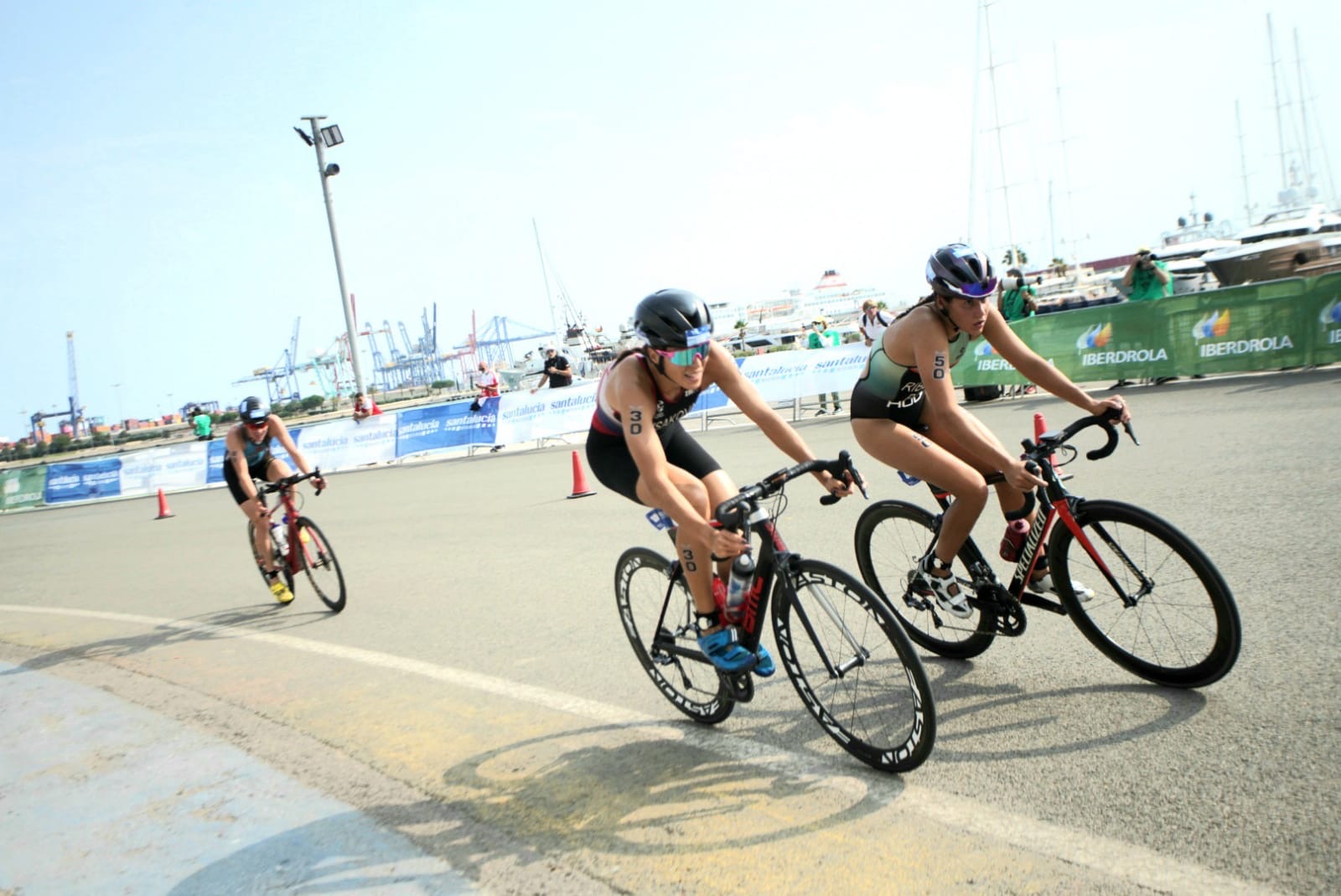