Briffod back on form snatches gold on the run.

It has been an amazingly intense day, with the ETU races following each other so quickly. The LOC and the Technical Officials, led by Italy’s Aldo Basola, had worked so hard to deliver the event and now we were at the last race of the day.

67 Elite Men lined up and were soon off on the 750m swim. The sun was making its way down and the shadows were getting longer. As the wind dropped, it would be an easier swim for the men but a little cooler.

We are used to seeing Kevin Tarek Viñuela Gonzalez leading the swim at Spanish events but this time he was joined and in fact led out and into T1 by teammate, Ander Noain Lacamara ESP. Noain was fast in transition and in no time at all, out onto the road, looking back over his shoulder for support. He was soon engulfed by what looked like the entire start list as they snaked along the streets.

As the riders settled into a rhythm, it was a leading group of 24 that took control.

An attempted breakaway led by Austria’s Tjebbe Kaindl, dragged Adrien Briffod SUI, Brits, Morgan Davies and Iestyn Harrett was soon extinguished and the 24 were all back together. In that group was Alexander Bryukhankov alongside the very much younger Andrey Alypov from the Russian team.

The dead turns gave the chance to some to push hard and try and break the pack but also gave the chance of the chasing pack to try and catch but the lead was held, with two extras being added.

It was Henry Räppo EST led them into the main arena, with Davies and Briffod on his wheel and the whole group. Back out onto the seafront and Kaindl, with Demuth had time to share the lead and smile for the TV cameras. Did they have a cunning plan?

The 28-strong peloton made a huge impression on the crowds and the cheers, led by the speaker, as the athletes came into the main arena, drew more and more spectators.

As the bell sounded in the ears of the leaders, the fast runners were poised at the front of the pack, seeking the lead to avoid any crashes further back in the pack.

One athlete dropped, the pack was down to 27. It was an open race.

Entering T2 and the scene was amazing.

27 athletes rushing to their racks, stow their bike helmets and get their shoes on and then to get out on the course ahead of their rivals. It was electric.

First out onto the run course was Kaindl, followed by Genis Grau ESP, Briffod, Nicola Azzano ITA and Bryukhankov.

Bryukhankov with Briffod and Grau had the pace to break away. The tall Russian always looking in pain, the Swiss athlete, light on his toes and the Spaniard, cheered along by the crowds, tucked in behind them and suddenly Alberto González García ESP was there with them to add to the crowd’s delight.

No Italian this time but enough interest for the local crowds to really spark the cheering and shouting.

As the Southern-most turn was approaching Briffod attacked and created a gap that held for a while at 5 metres. Had he gone too soon?

Bryukhankov looked as if he was falling apart but then, he always does and still delivers great results. He was pulling along the Spaniards but kept the Swiss athlete in his sights, measuring every move, gauging every step. Onto the back of this small group was Davies, who had kicked clear of the chasers.

Just 3 seconds as the bell sounded. That was all that Briffod had to play with. Bryukhankov, Grau and González locked together. Davies in their shadow.

Back out onto the sea front and the pace was beginning to hurt. First casualty was Grau and then González. The race was on as Briffod was caught by Bryukhankov and then Davies joined in the fight.

Briffod kicked again just before the small bridge that led the athletes to a sweeping turn. Running so high on his toes, he flew and once again created a gap but this was in the same place and at the same pace as before. Bryukhankov watched. Davies tucked in behind the tall Russian. On the rise over the river Briffod’s pace proved to be holding. He had now only about 1500m to go but with the two athletes almost breathing down his neck, it would be the longest 1500m of the year. Suddenly it was the last big turn. Now it would be a long straight to the right hand turn and the cheers of the crowds. Bryukhankov attacked. Davies faded. Briffod looked once behind him and saw the tall threat, the blue uniform and the Russian.

Now entering the arena and it was a flat out sprint, with Briffod just having that advantage. A small check to see how much space he had and Briffod, the light fading, took the hardest earned title of the year. Bryukhankov claimed a well-earned silver and for Welshman, Davies, a magnificent bronze, which will be making its way back to Porthcawl in no time at all. 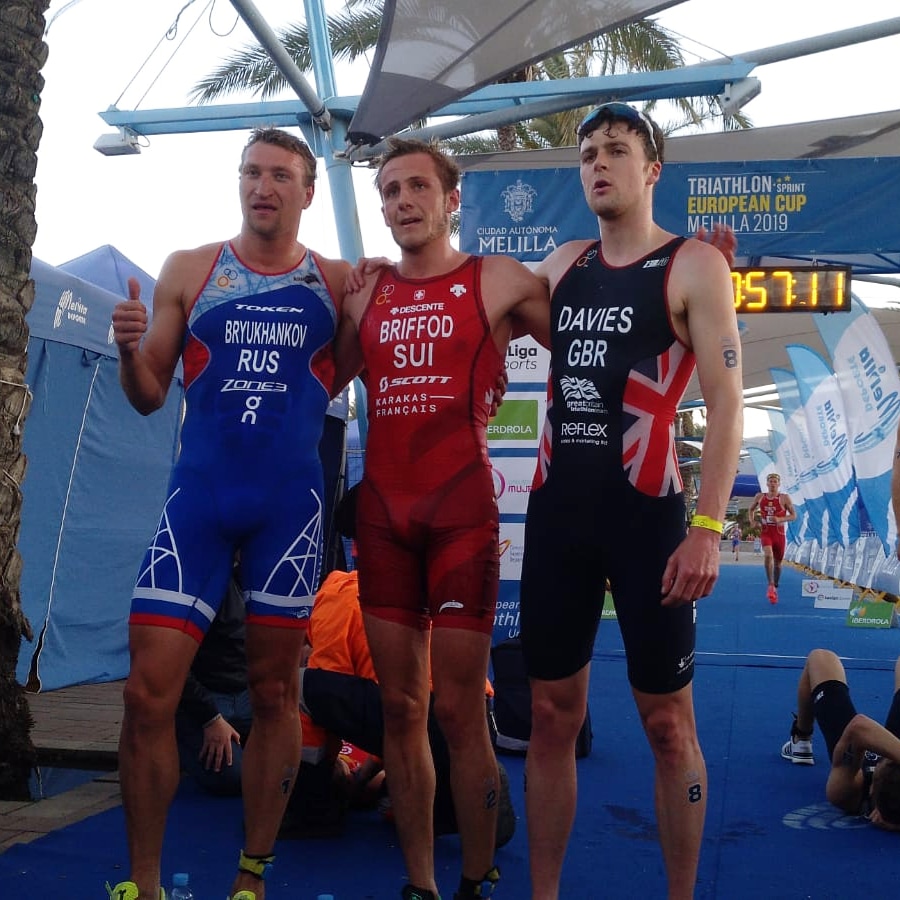 For the home crowds, González in 4th was a big cheer and Italy was rewarded with a 5th place from Matthias Steinwandter.

Melilla once again delighted the crowds, challenged the athletes and gave us a great event. With the added support now in Spain of LaLiga Sports TV, the Spanish races are at a new high in terms of delivery.

We are waiting on a set of photos that will be added to the reports. As soon as they come in, we will share with you the links and the images.