Van Riel and Razarenova win the end of season finale

The racing season has been a long one and over the past ten days there have been so many events taking place that it has been impossible to report on them all in any great detail. Towards the end of next week, ETU Media will be delivering a detailed report on the amazing Multisport Festival that took place in Ibiza, with Elite, U23, Junior, Para and Age Group medals being won. We will have a chance also to check out the medal tables as each day progressed and of course the final medal table for Age Group athletes.

This weekend, however, it was the chance for the top athletes from all over Europe to race at the ETU Cup Final. This year it was hosted by the Associação Regional de Triatlo da Madeira, who staged not only the 2018 Funchal ETU Sprint Triathlon European Cup Final but also the 2018 Madeira Paratriathlon World Cup Funchal.
Coming into the race, the top three ranked Elite Women were on the start list.

With Ukraine’s Yuliya Yelistratova no stranger to the top of the rankings, she has won this series more than any other female athlete, she would be facing stiff opposition from Alexandra Razarenova who returned to from in style this year with a solid victory in Weert.

Both became mums last year and both are back into top fitness. Yelistratova’s 1,044 points would be enough to keep her ahead of Razarenova, so long as she could either win or be very close to the top of the podium. French athlete, Margot Garabedian has had a good season and could potentially influence the results.

Amongst the Elite Men, it was Belgium’s Marten Van Riel who would battle against Justus Nieschlag to generate some real pace at the front end. Both athletes have been racing the WTS and World Cup series. Van Riel’s victory in Wuustwezel and bronze in Glasgow has taken him ahead of Nieschlag in the rankings but we expected the battle to be from them and were not denied a great and thrilling final.

What makes this end of season race so important is that ETU has provided a bumper prize-purse of €40,000, which will be shared amongst the athletes who have raced the series and who race here this weekend. The top ten athletes in the ETU Rankings Series will be rewarded for their hard work and dedication to our ETU Race Calendar.

It is no secret that the gold medals went to Razarenova and to Van Riel but what happened during the races remains as yet untold.

A changed swim course, as a result of adverse rains in the days leading up to the event, was created by the LOC in conjunction with the Technical Team. Clearly marked, the athletes had a non-wetsuit swim of 750m.

It was no surprise at all that Theresa Feuersinger AUT and Garabedian were in the lead group as they exited the water. They were accompanied by Lena Meißner GER and by the two strong swimmers from Portugal, Vera Vilaça and Gabriela Ribeiro. This not only gave the crowds something to cheer about but also additional power in the lead group. Razarenova had done well to stay in touch and they had more than 15 seconds advantage over Yelistratova.

The bike course here is flat, then very hilly with a long, dig deep climb, followed by some technical sections, a fast descent through a tunnel back onto the sea front. Feuersinger and Vilaça worked the peloton hard but soon they had been joined by some of the stronger cyclists and had dropped those who could not maintain the pace or who had mechanical problems. Razarenova was still in the lead group. Yelistratova in the chase group.

Into T2 and the two groups were still apart. Razarenova stormed out onto the run, which is largely flat and was now lined with spectators. Meißner could do nothing to catch the Russian but on the dead turns could see the fast-paced Ukrainian who was running on and on and on and catching up with every pace. 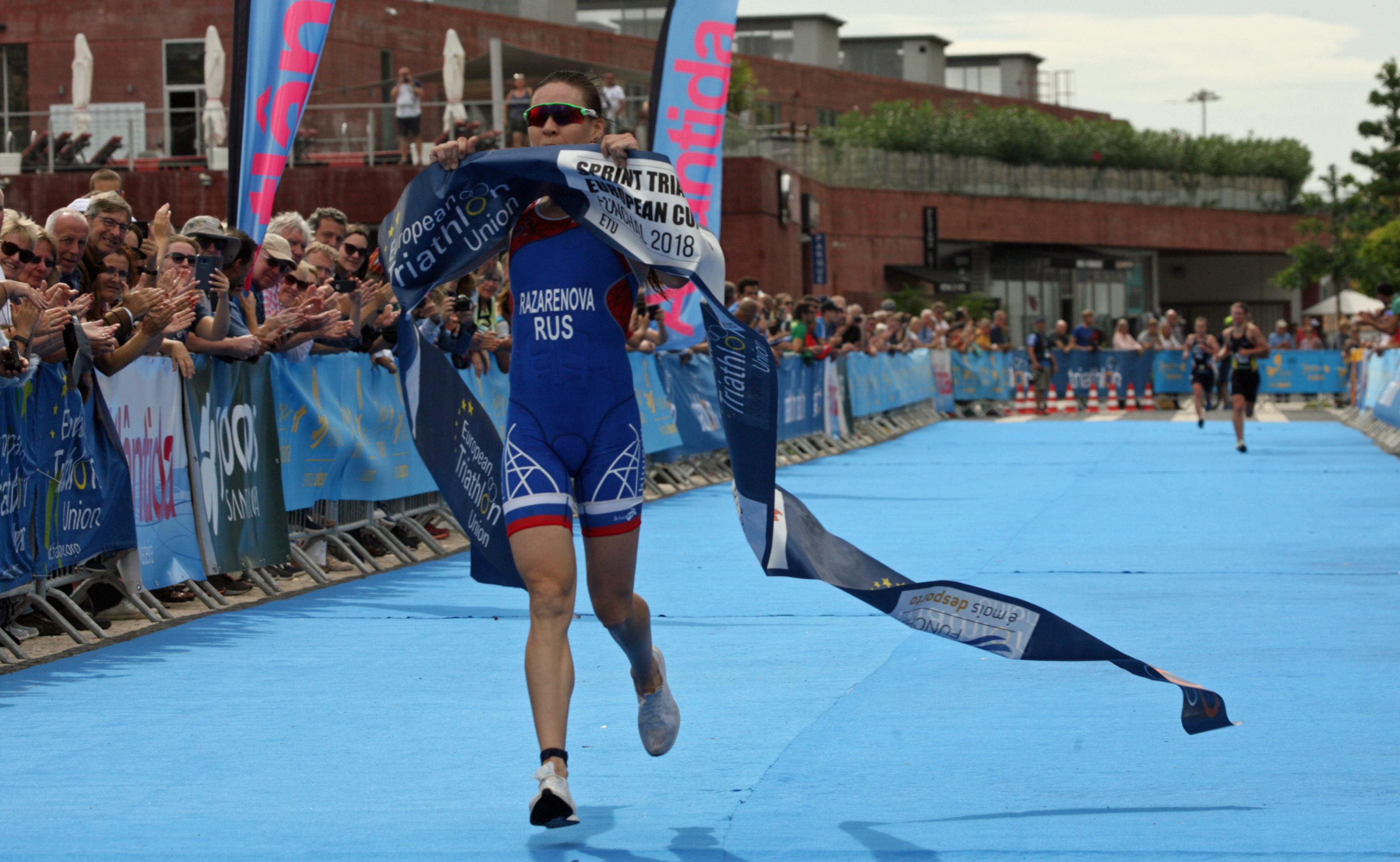 Razarenova was clear. Yelistratova had caught Meißner and as they entered the finish chute were neck and neck. Incredible scenes followed as Meißner found an extra gear and managed to pull one stride ahead of Yelistratova. 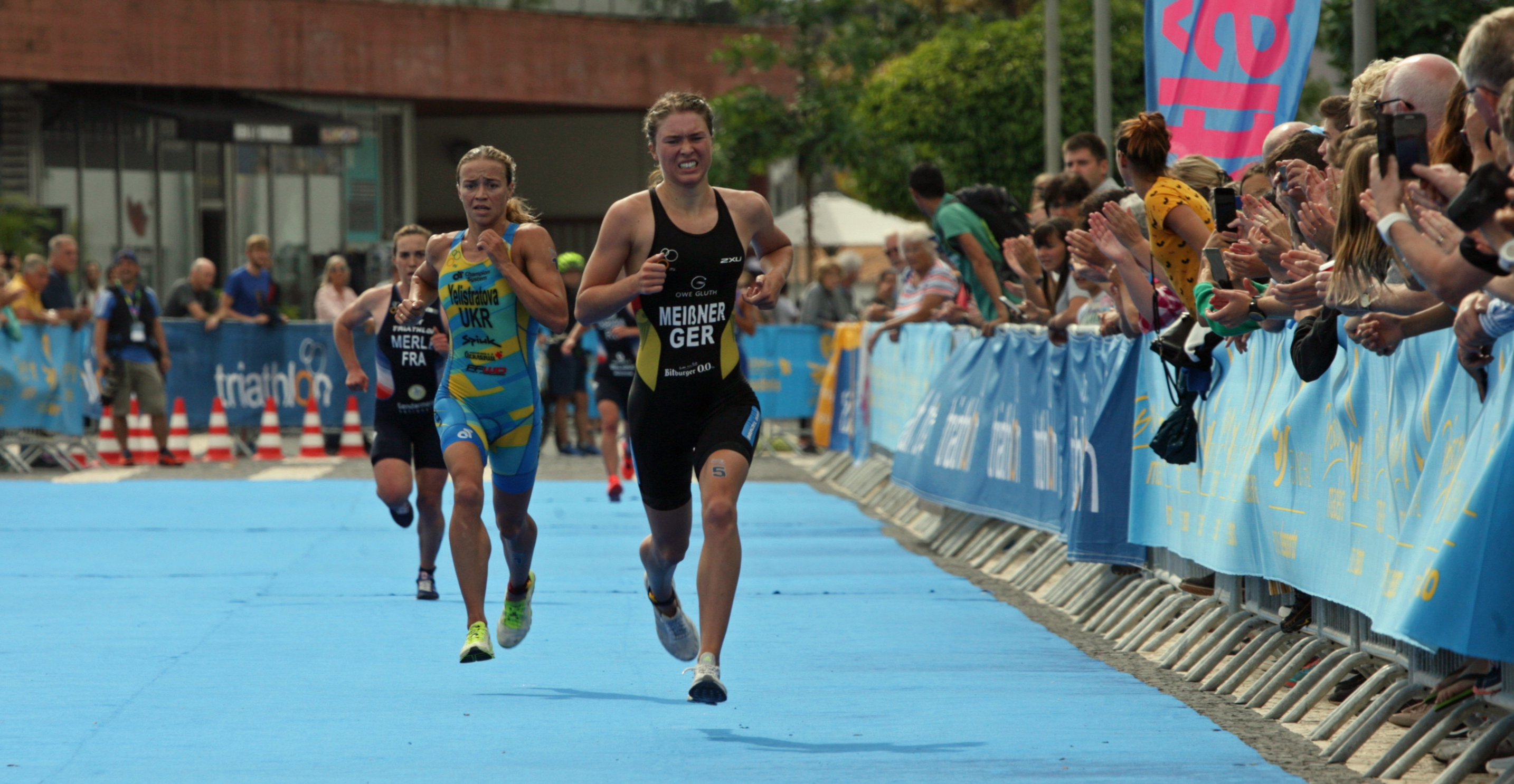 There are not many people who can do that but she timed her kick to perfection and snatched the silver from Yelistratova’s hands. A great run from Audrey Merle took her to the line ahead of Garabedian to give La Fédération Française de Triathlon something to cheer about. 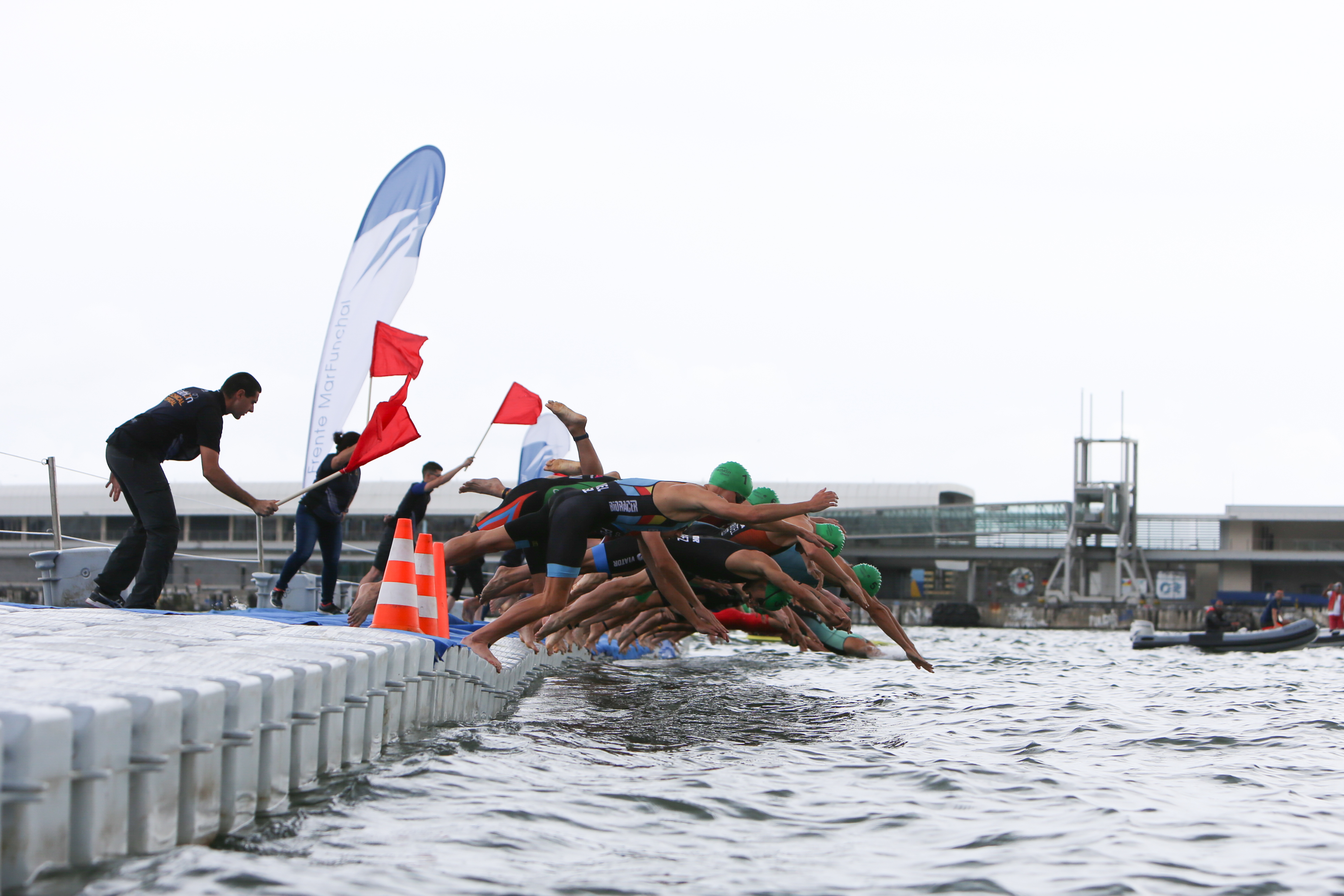 The Men’s race was led by no one other than Márk Dévay HUN. He has been so consistent this year and is working hard to show us all that he can ride and run too. He was followed out of the water by Anthony Pujades FRA and Van Riel who had lost his timing chip in the swim. Ricardo Batista POR gave the local crowds something to cheer about as he was just a few strides ahead of Nieschlag as the athletes raced into T1, secured their helmets, grabbed their bikes and ran towards the mount line.

The heavy clouds above us finally gave up, relaxed and dropped their load of rain and the roads became slippery but still, Van Riel pushed the pace and made sure it hurt for everyone who wanted to stay in that top group.

The Belgian led them into T2 but it was Dévay who led them out onto the run. He was followed by Pujades, Nieschlag and Van Riel and so it came down to the final 5k. Soon enough the Hungarian was caught and the Belgian, French, German leading group pulled away. Just by the aid station before the final turn, Pujades kicked but neither Nieschlag nor Van Riel needed water and they went with him.

By the time they had reached the last dead turn, Pujades was spent and it was Nieschlag and Van Riel neck and neck, pace for pace onto the blue carpet. 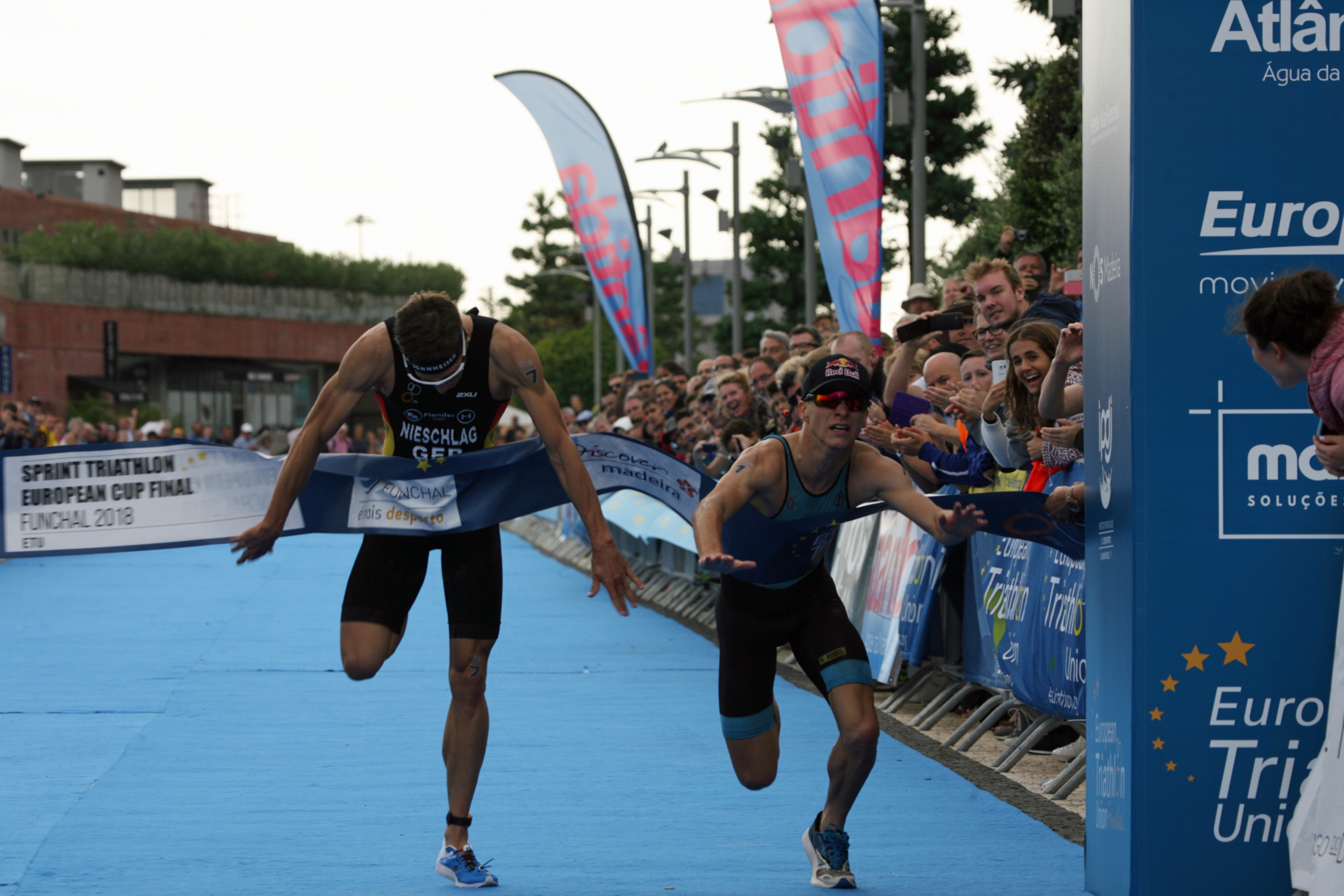 The crowds screamed and shouted, the commentator went wild, the athletes surged forwards, arms and legs wild and then, just on the line, Van Riel found just that little bit more and, with both athletes diving at the line, it was the torso of the Belgian that crossed the line just a fraction ahead of the German. 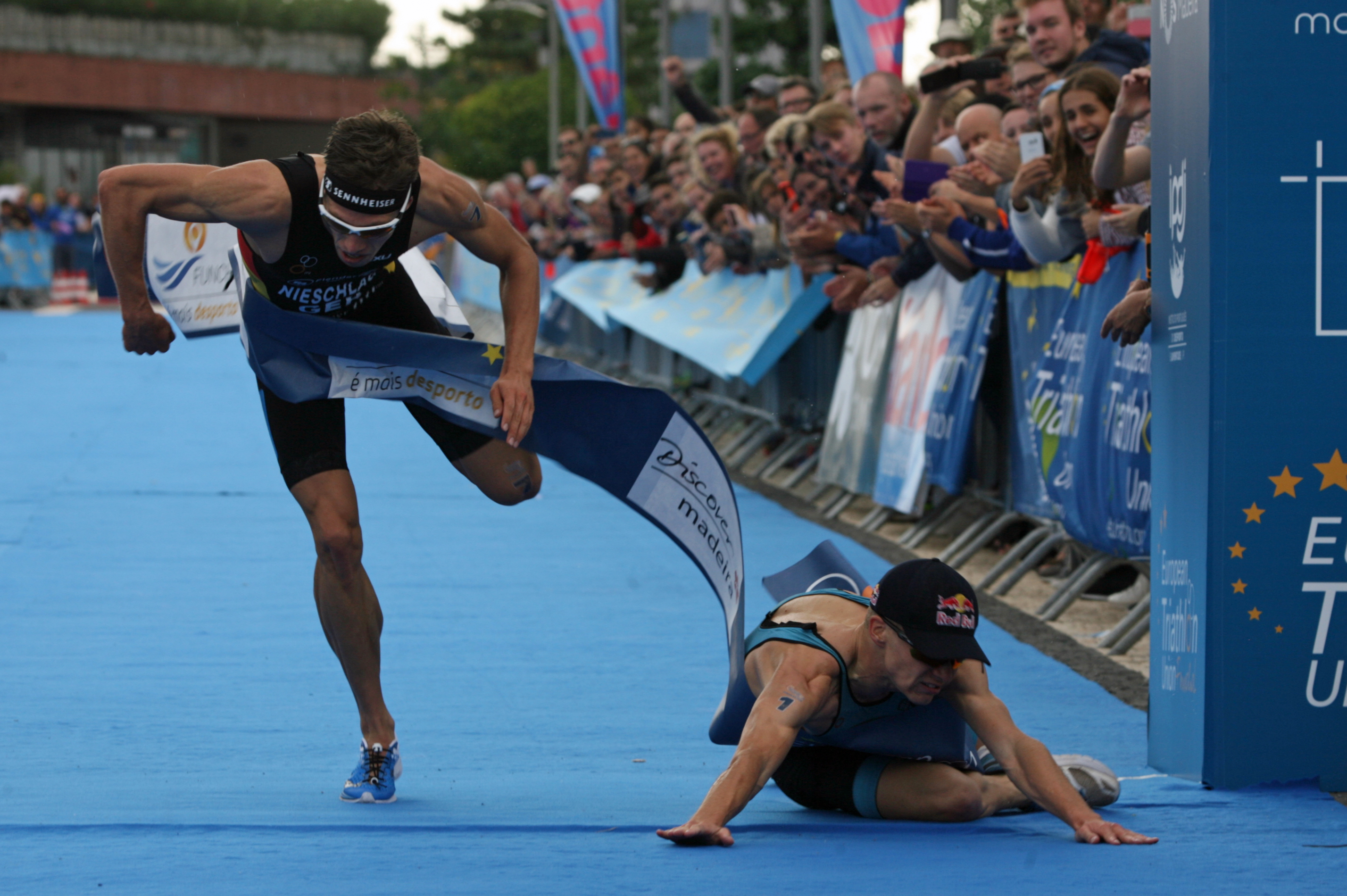 The Head Referee took her time, consulted with the timing team and as many of the photographers as possible and she declared the winner. 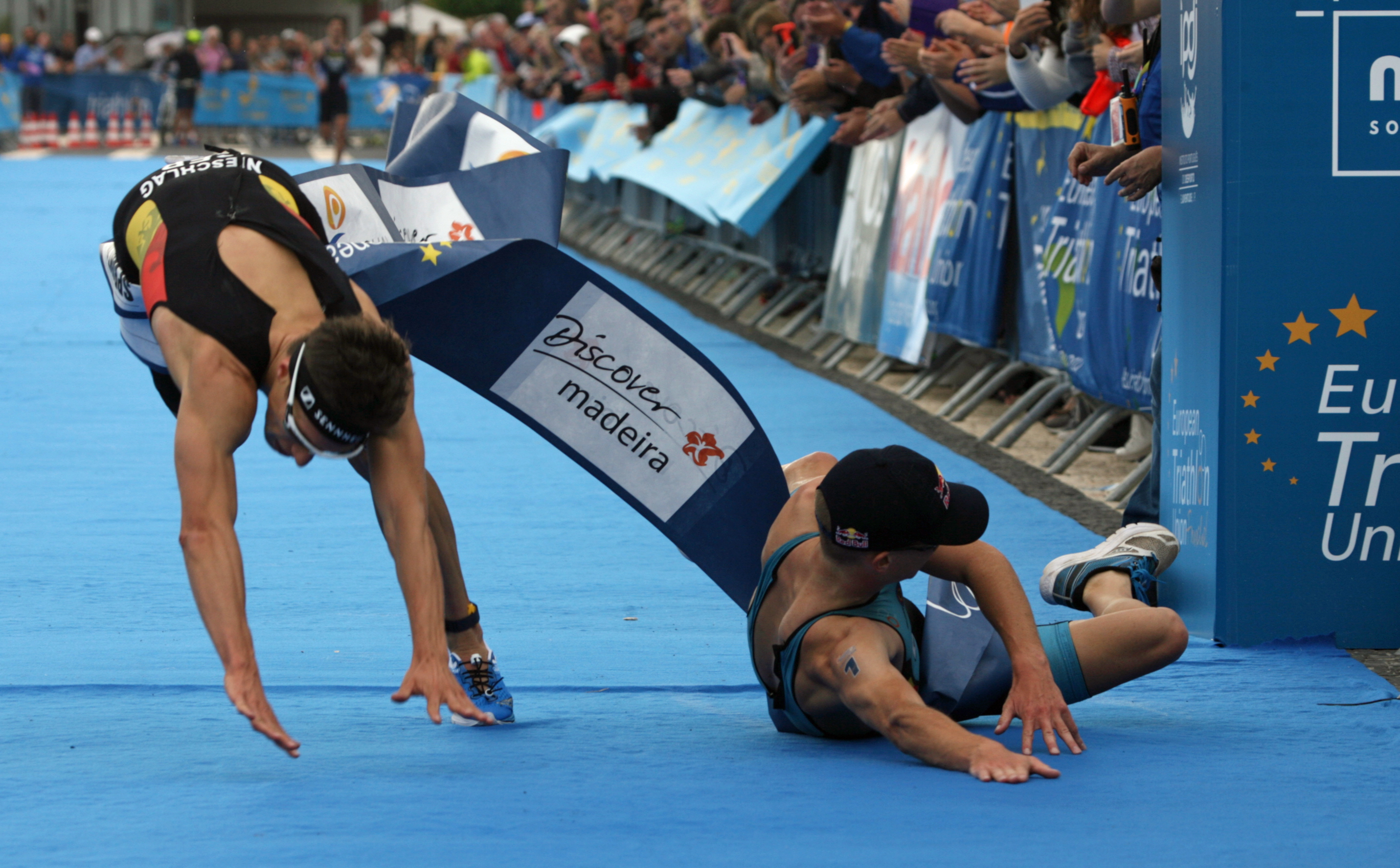 We thought that the finish in Eilat was exciting. This was every bit as exciting and, coming at the end of the season as it does, was even more impressive. 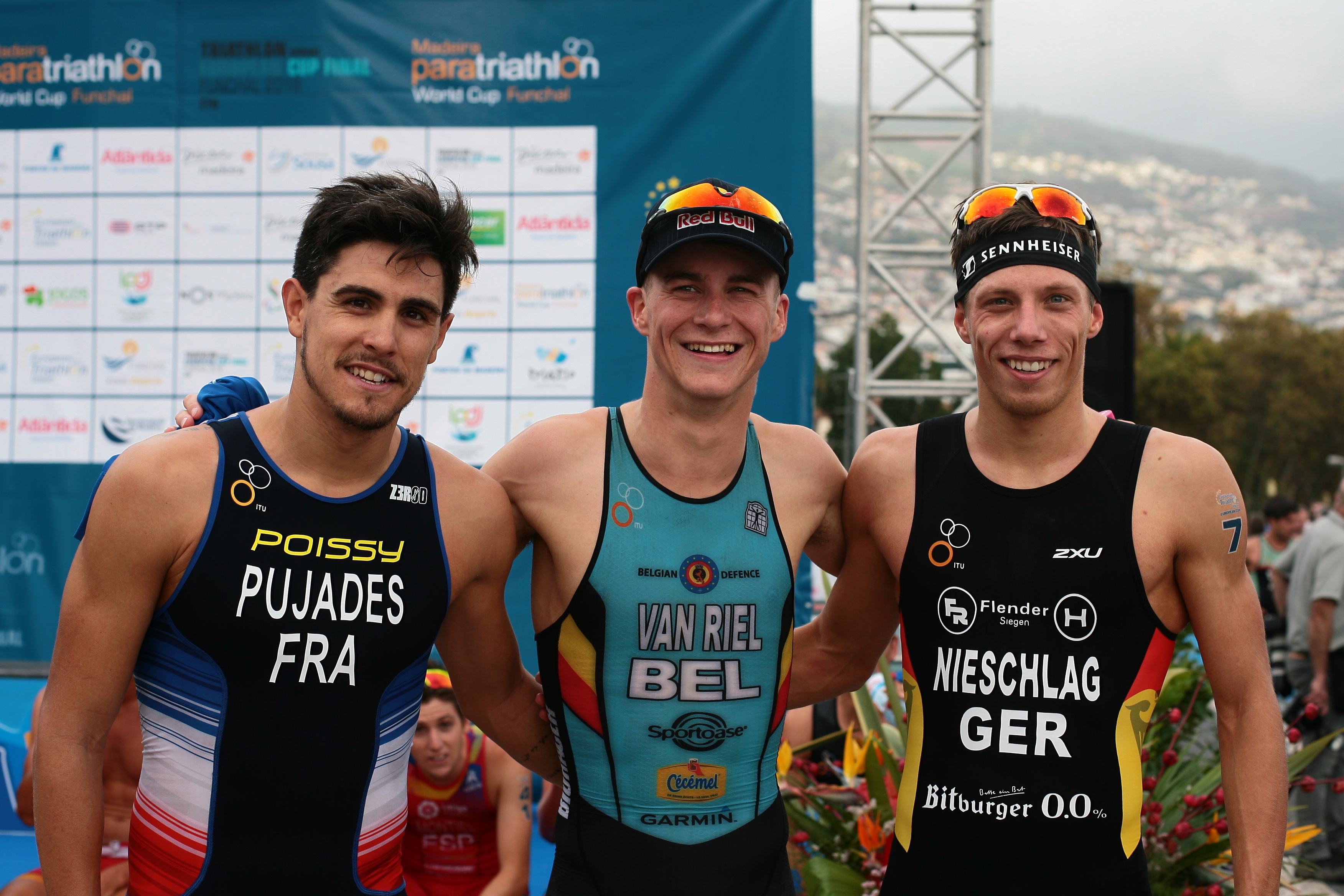 The money for the Rankings Series goes down ten places. We will provide the list as soon as we get it from the results guru, Enrique Quesada and qualifying athletes will be notified by ETU HQ ahead of the bank transfer.

An amazing year of races.

Thank you to all athletes who have made the season so exciting.

Thanks too, to Filipe Pereira and Unspotdesign Branding Desportivo for the additional photos and support here this weekend.