New European Champions; both from Russia

With raging storms last night and more snow than we really wanted, it looked like the race might have to be seriously changed. Contingency plans were set in motion and it was all hands on deck at 07:00, with the wind still whipping at the icy particles. A small team of dedicated officials working in temperatures that dropped to minus 25, struggled with cable ties that snapped in the cold and with branding dragging barriers over as soon as they were set up.

As they worked to set up the course, the venue owners were out in the vehicles, finishing the snow to pack it down and make it as good as possible for the athletes. At this race, the men’s favourite was always going to be the 7 times World, 6 times European Champion, Pavel Andreev RUS but carrying a heavy cold and, we later found, with a high temperature, today was the day that the crown was passed to his teammate, Dmitriy Bregeda. A smile that lit up the bitterly old day took Bregeda to the finish line, the Russian flag flying high. European Champion once more, his last win was the U23 title in Lygna back in 2010. Bregeda had led from the very start, gradually pulling further and further away. A magnificent solo effort that saw in the final stages just one athlete chasing. Giuseppe Lamastra ITA, lost over a minute on the run but then put in a stunning ride on the bike, before powering his way around the ski course. He was beginning to eat into Bregeda’s lead but this shorter distance was just was the Russian needed to clinch victory. For Lamastra, this location has good memories, as it was his win in 2017, when the event first burst onto the Winter Tri scene but this silver medal must rank as one of his best results. Bronze medal went to Russia, with Pavel Yakimov matching his 3rd place last year in Etna. 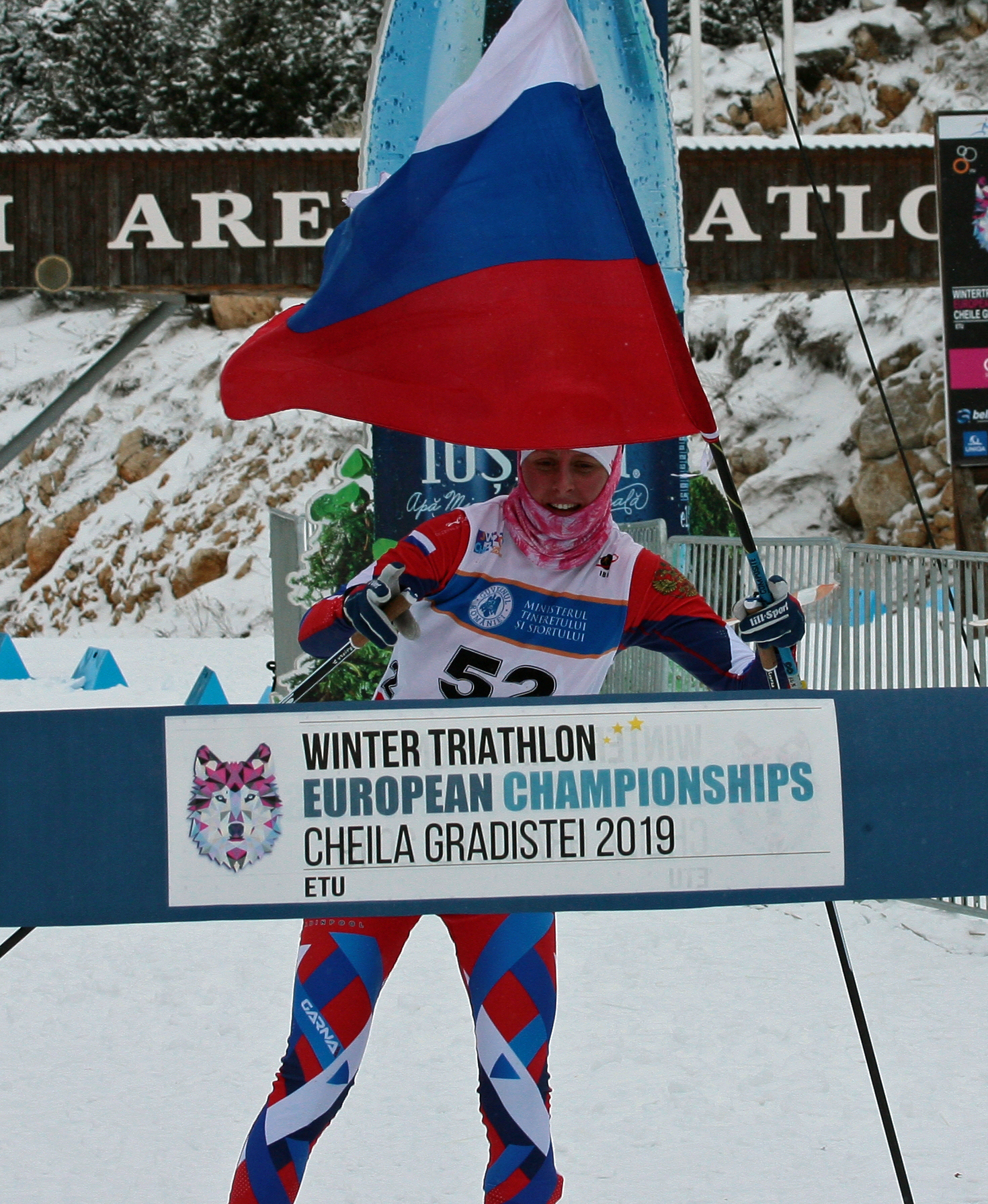 The Women’s race was pretty much a repeat of Asiago, with newly-crowned World Champion, Daria Rogozina once more proving to be too strong on the bike and ski segments, crossing the line comfortably ahead of Yulia Surikova, who claimed silver. It was the early race leader, Svetlana Sokolova who rounded off the podium to make it a Russian clean-sweep. For Rogozina, this was not only another title but makes her the reigning World and European Elite Champion as well as the reigning World and European U23 champion. Sokolova’s finish gives her the European U23 silver medal ahead of Nadezhda Belkina.

The U23 men saw the Italian team go wild with delight as Alessandro Saravalle put in a superb bike and ski combo to edge ahead of Evgenii Evgrafov RUS, who had a spectacular fall less than 100m after the start of the race. Tripping and rolling away to the side of the run course, he recovered well to say with the pack and to then ride well to secure silver. Bronze went to Ivan Zalavtsev RUS, giving him his first international podium.

Slovakia will be celebrating the victory of Slovakia’s Zuzana Michaličková who shared the podium with her teammate, Margareta Bicanová, who claimed silver ahead of Russia’s Ekaterina Karpova.

The reigning world champion, Simone Avondetto ITA made it look easy in the Junior Race, with a time that would have given him 8th in the Elite and silver in the U23 category. Adding the European title to his collection, he shared the podium with two Romanian athletes, Leonard Stefan Hincu and Botond Zoldi, in silver and bronze medal positions respectively.