Dijkstra and Fullagar make it gold in Lausanne 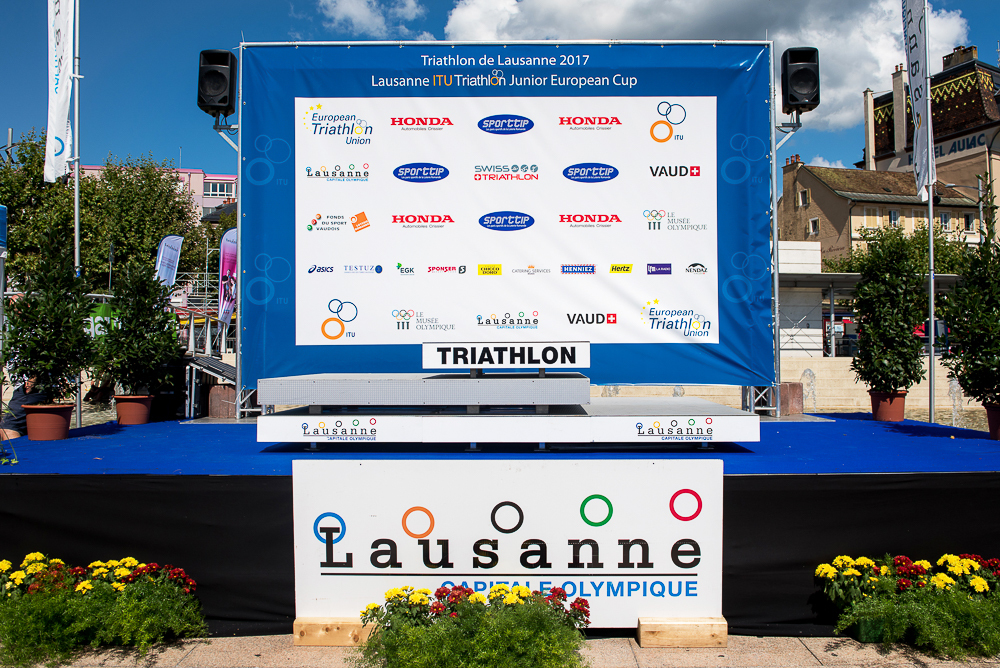 Lausanne is going to be the place to be in 2019 with the Grand Final. Having hosted the “World Championships” twice before and being home to the ultimate authority, we expected it would be good and my goodness it was good.

How good is the venue? Just click here to see.

With the sunshine bright; with the waters of the lake warm.; with the athletes on great form,. The thousands of fellow triathletes and spectators who lined the course were treated to a spectacle of swim/bike/run and thanks to Martin Breedijk, the ETU Executive Board member who attended, we were able to follow the race from afar. His live updates on Twitter really brought the race home to us all and a global response showed us that he did a great job.

How did the athletes do?

Well, sadly, ETU Junior Champion Kate Waugh GBR was sadly absent from the start line and that pretty much opened the race to Jessica Fullagar FRA. 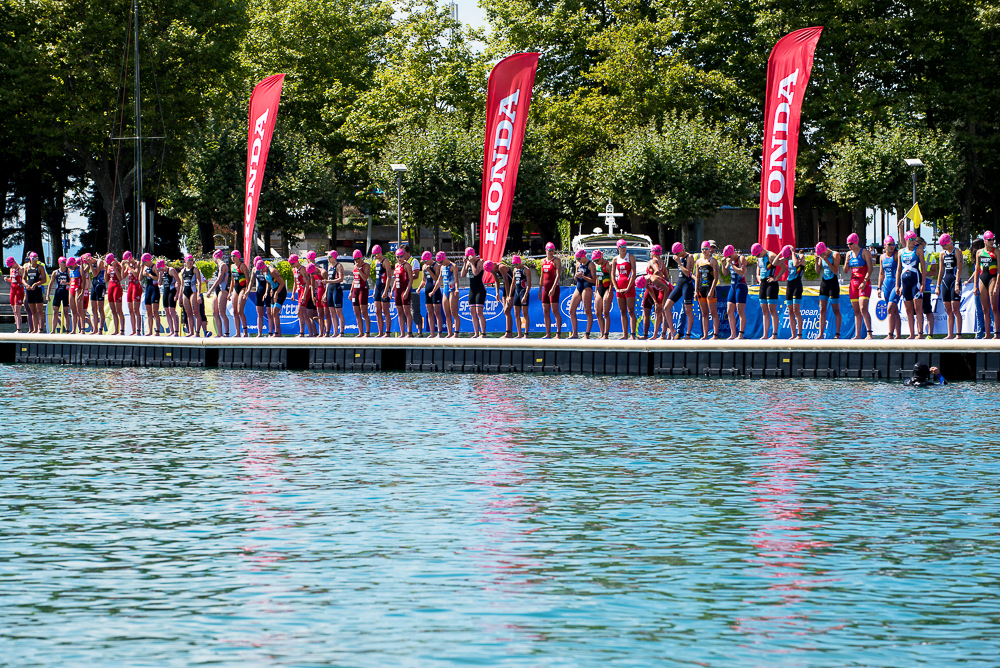 The British champ might have been absent from the race but right from the start, the swim was dominated by the Brits and it was Elisabeth Hood who, with Sophie Alden and then Issy Morris and Erin Wallace put four British athlete in the leading group of 12. 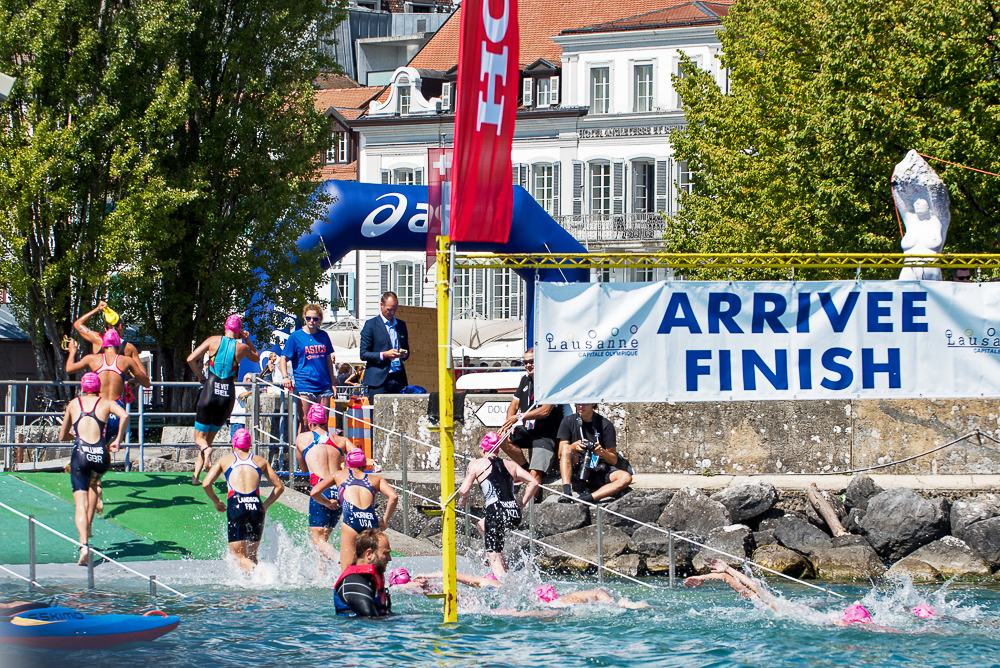 Fullagar was sensibly placed in that group and the women set about pushing the pace to escape the chasing athletes. 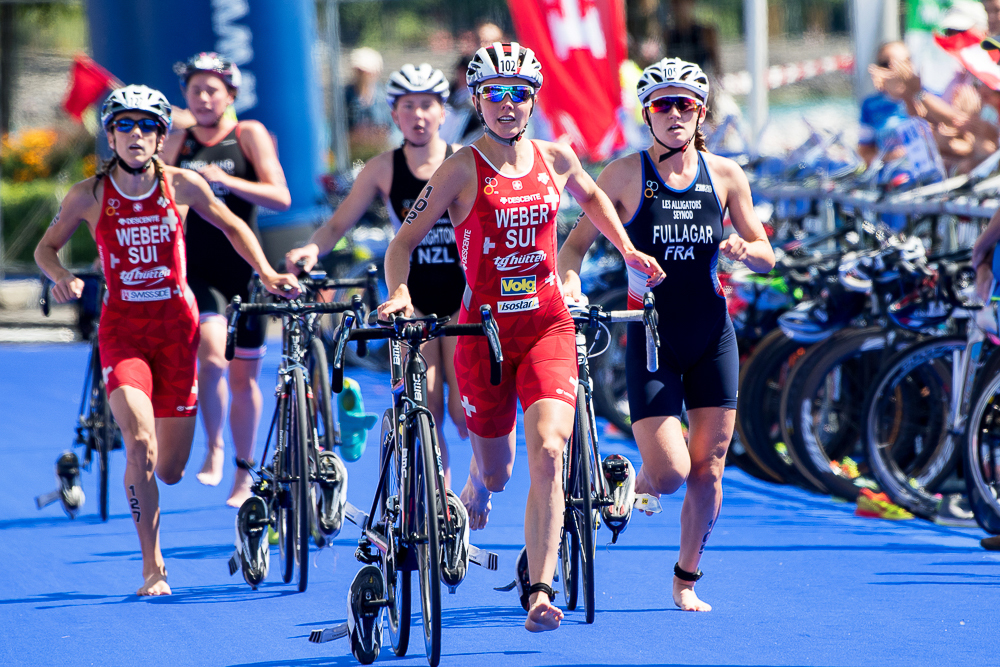 Having established a 20 second lead they attacked the climbs, dropping some of the group and by the time they were ready for the run, Fullagar had managed to grab the race lead but she would have to fight against the Swiss athlete, Jasmin Weber and the easy strides of Wallace.

Further back and looking like a real threat to the podium was fellow French athlete Audrey Ducornet who did not have the best bike but who was now running like the wind and closing down on the leaders. 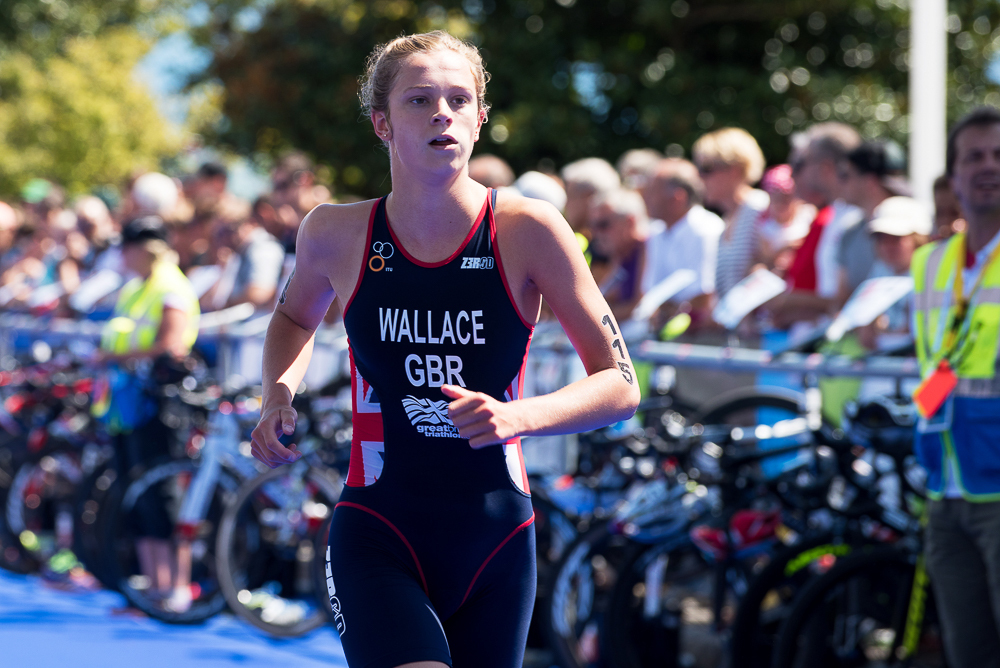 Weber lacked the final run pace but then came Alden, with Wallace in front. 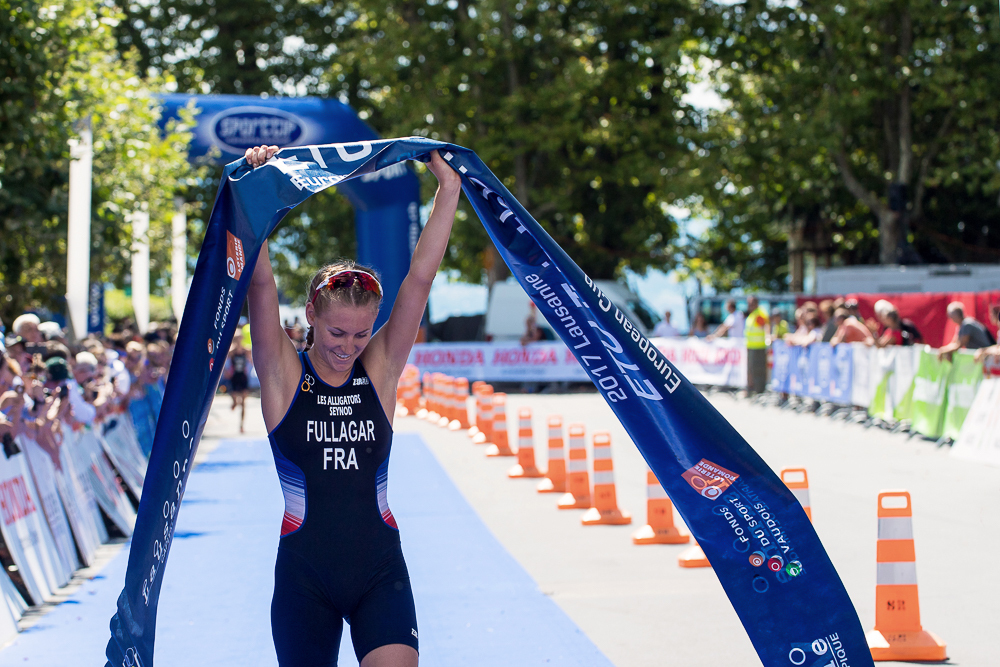 Fullagar was out in front and home for gold but behind there was a fantastic performance from both Wallace and Alden to secure two podium places for GB, with Scottish fans going wild with the silver for Wallace. 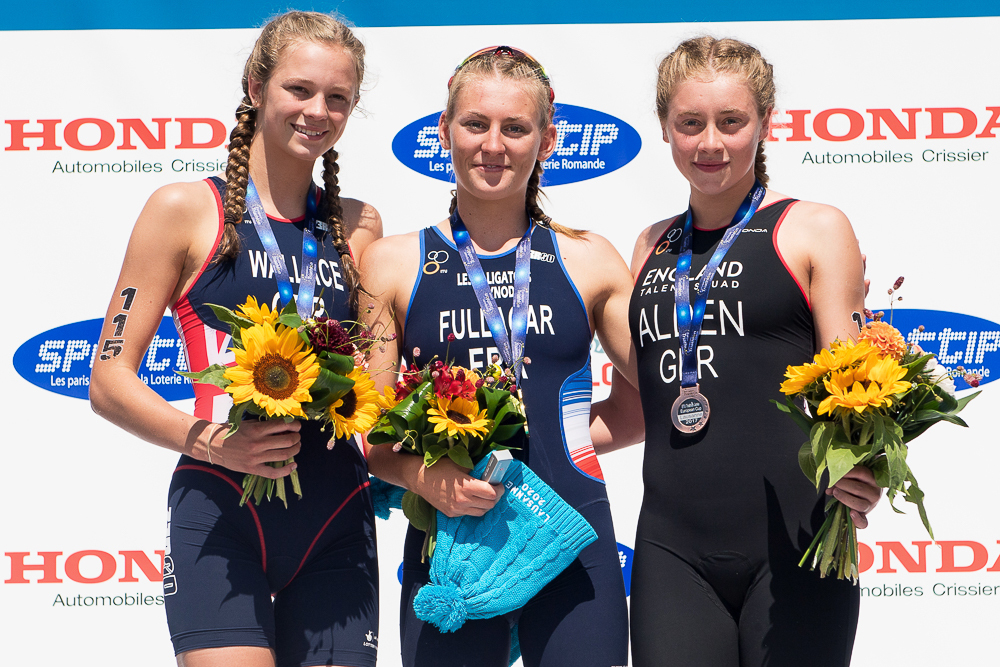 With the women’s race only just tied up, it was all down to the men and a massive line-up of athletes gave an added thrill to the race. 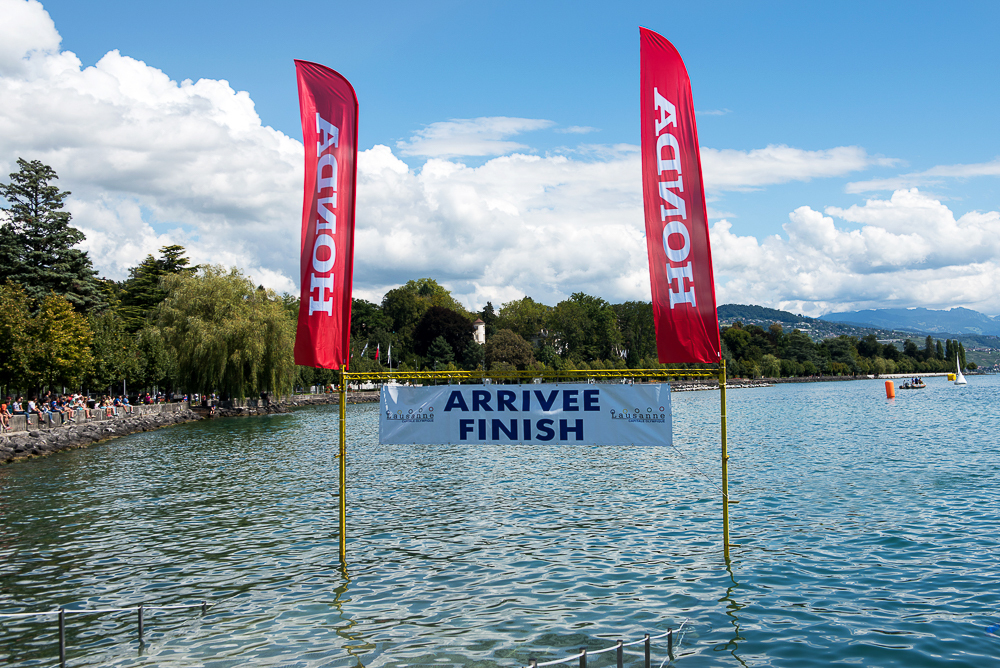 This would be a great opportunity to see GB’s Ben Dijkstra former Youth Olympic Champion, race against the current ETI Junior Champion from Portugal, Vasco Vilaça. Both fast but both facing the same risks of a very full start list and with the technical and challenging course of Lausanne, there would be no room for any errors.

The swim start was oh, so impressive and the athletes were led out of the water by France’s Max Stapley who had clear water behind him for the latter stages of the race. 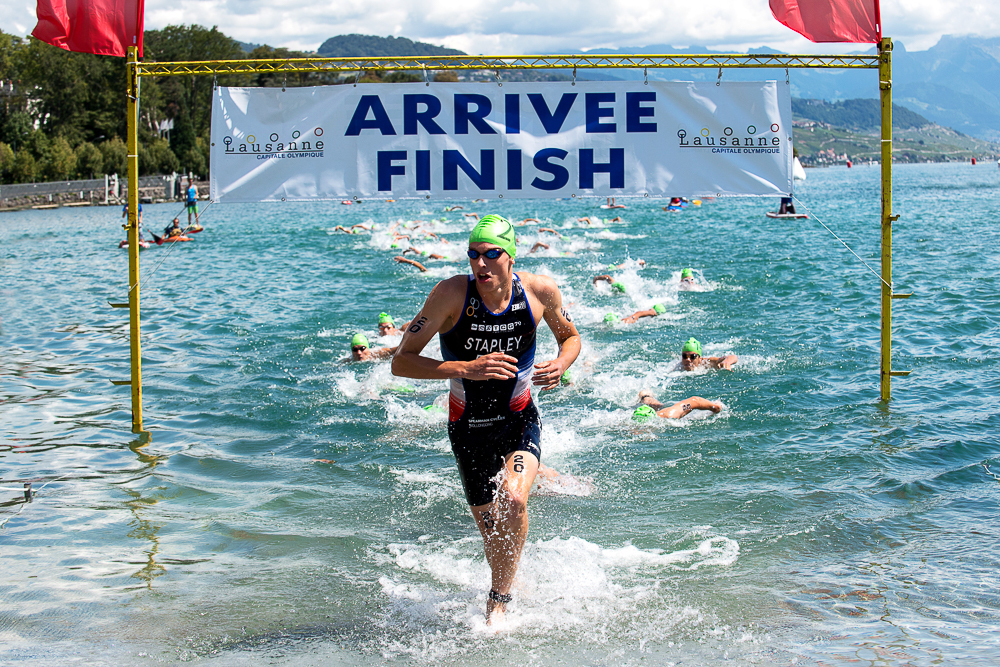 A steady stream of athletes made their way to T1 and some used their run power to gain valuable time to get to their bikes. 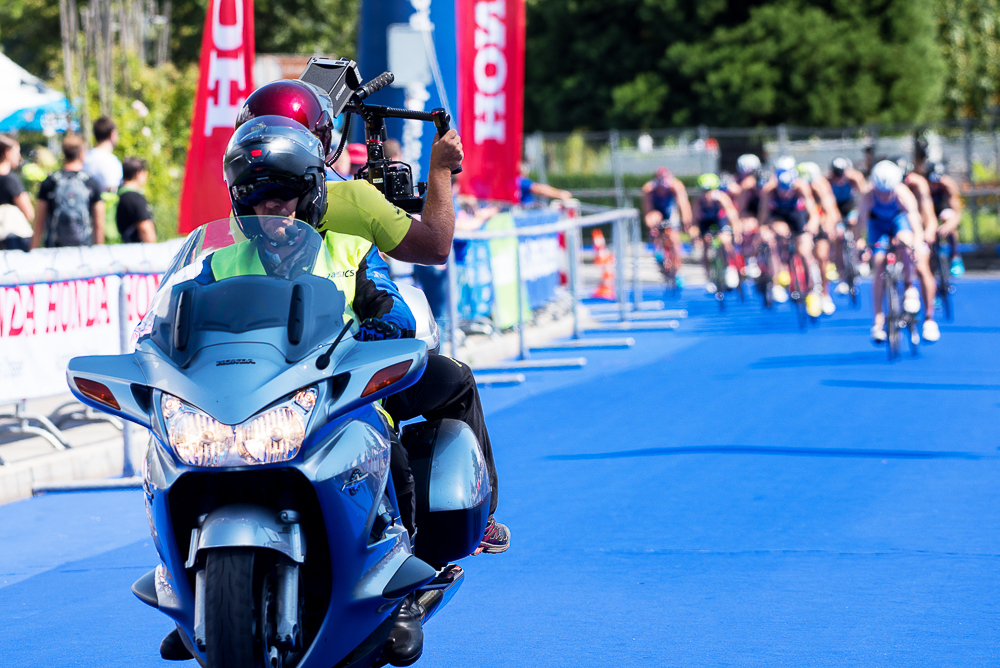 Over a dozen men powered their way around the bike course and each time they hit the climb they pushed harder and harder still. For the chase group this was true torture. 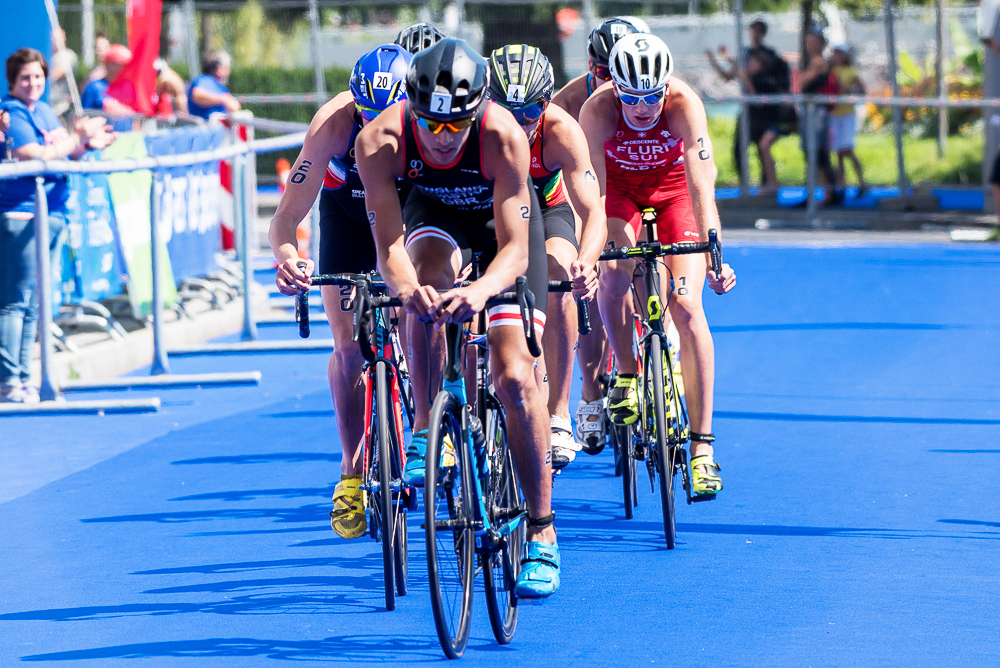 Amongst that leading group were some really powerful cyclists and they soon established a 20 second lead. Dijkstra kicked to try and break away. The pack went with him. The pace increased. 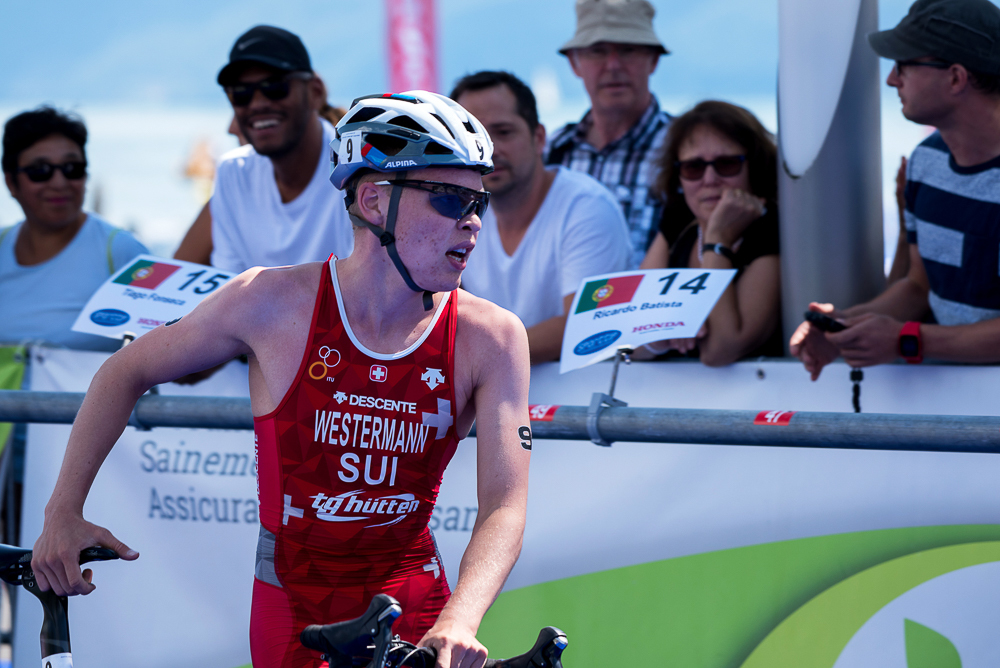 As the leaders came into T2, the Swiss crowds went wild as Simon Westermann had the transition of a lifetime and escaped out onto the run course first. 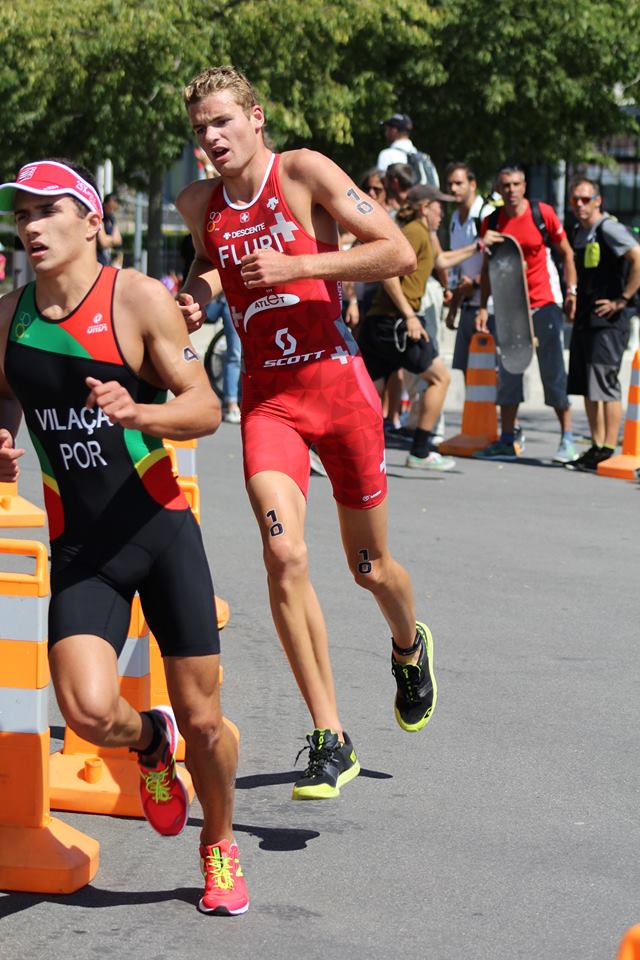 Behind him came Dijkstra looking relaxed and alongside another Swiss athlete, Maxime Fluri. A few paces back was the Portuguese duo of Vilaça and Ricardo Batista.

Once out onto the run course, Dijkstra set about giving us all a lesson in pace and with a stunning injection of speed, had dropped the pack, created a 7 second lead and was followed only by Vilaça and Fluri. It was Vilaça who looked more relaxed but he would have to dig deep and try to block out the cheers for the Swiss athlete by the local spectators.

By the bell, Dijkstra was clear. Vilaça had created a lead of some 30 seconds and Fluri had to hold on to bronze. 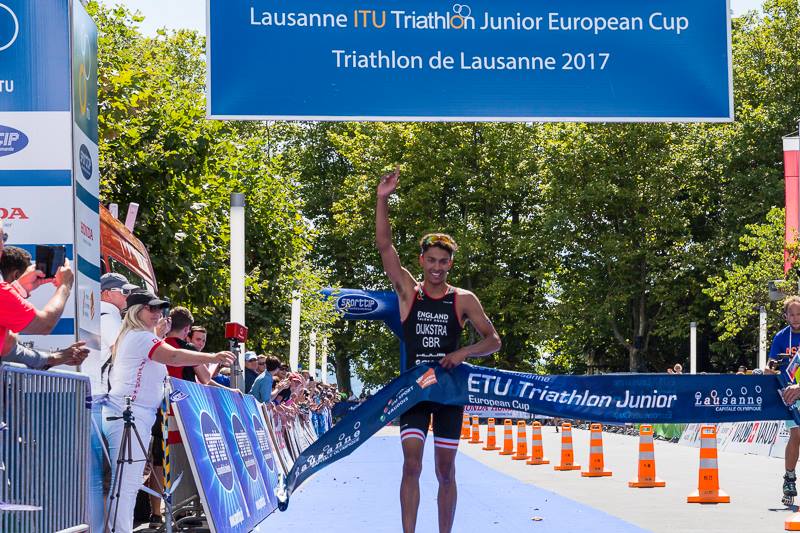 An easy run to the finish saw Dijkstra secure gold. Behind him Vilaça took the silver and if was indeed a medal for the Swiss as Fluri came home for bronze. 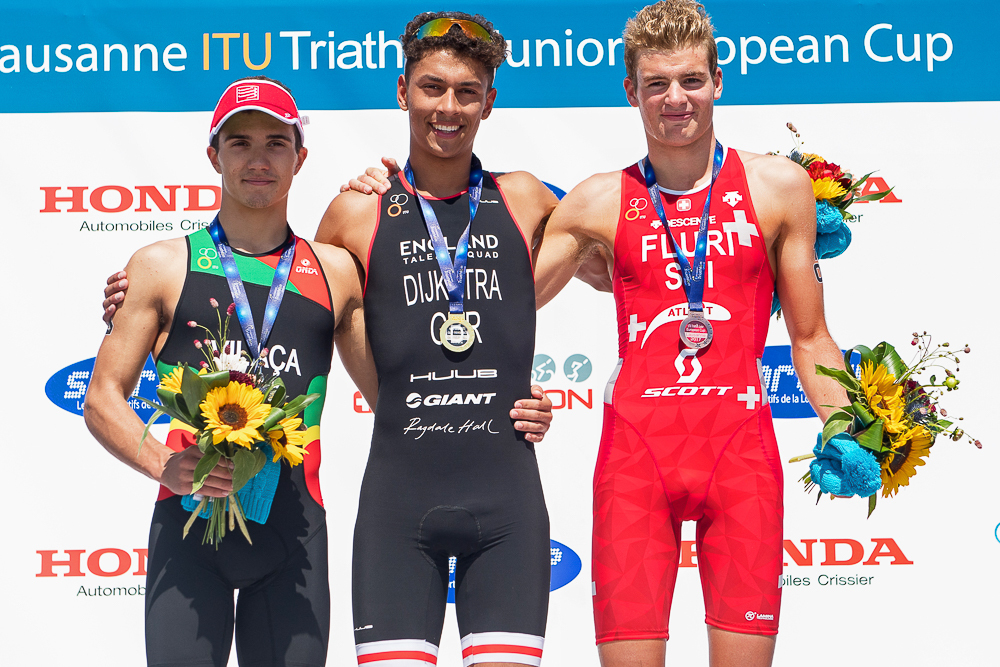 A look at the results showed 5 brits in the top ten – just goes to show; there really is a lot of talent on the way up. 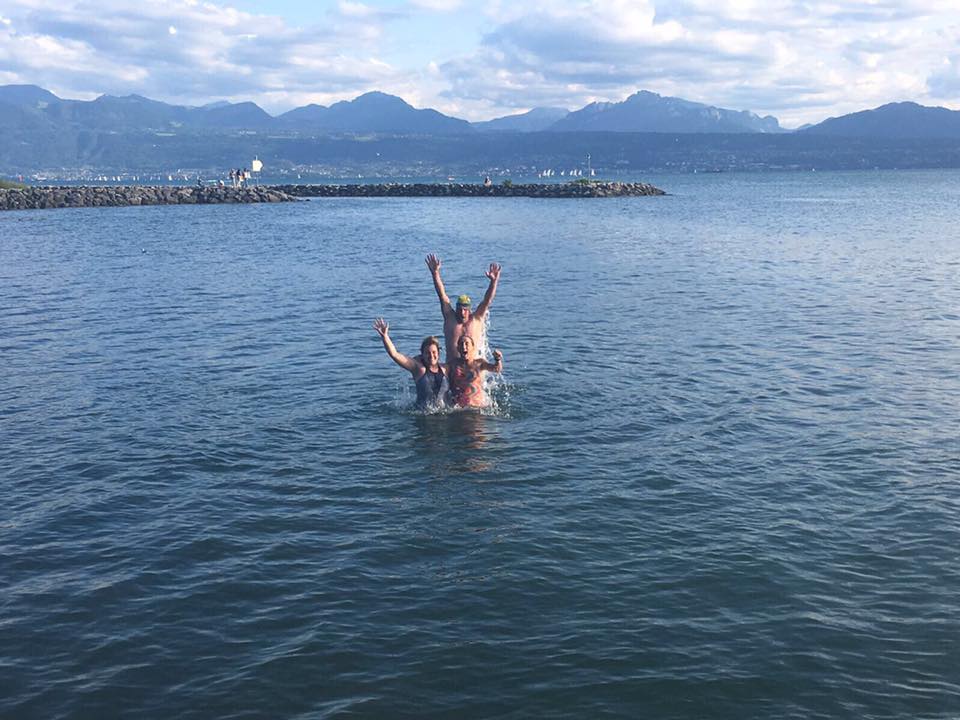 The GB coaches were delighted!

After the race, Vilaça was first to speak and still bussing with excitement said, “Just got my very first SILVER ETU medal minutes ago!  2nd place at Lausanne Junior European Cup.  Great job from @ben.dijkstra(1) who did an amazing run and @mimow0_0(2) that I had to fight hard with to get that silver medal! Thanks everyone for the support, and the crowds were amazing!” 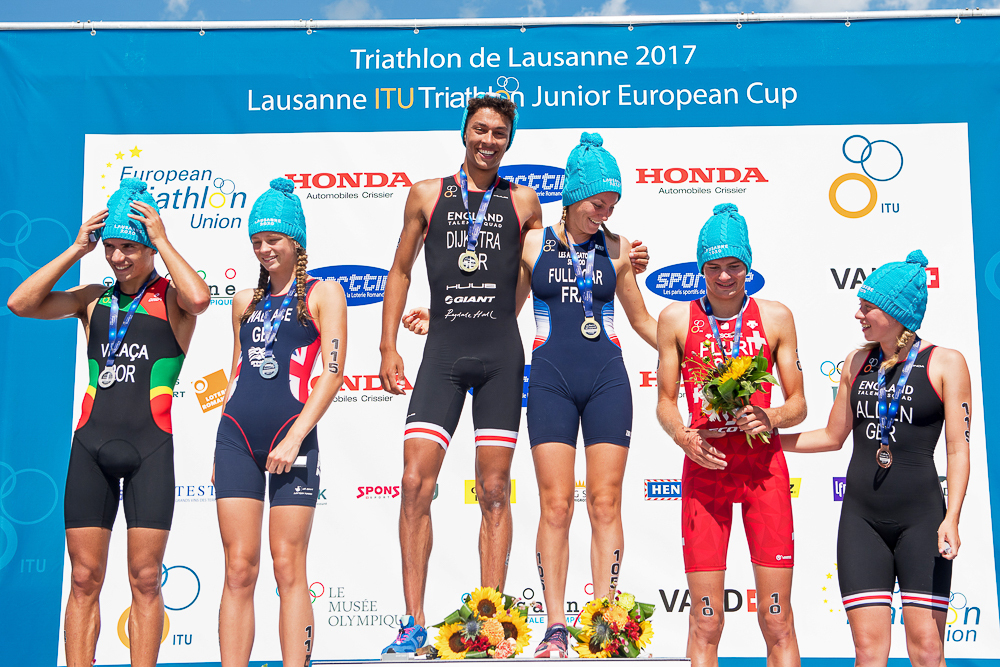 A truly awesome race and in such a stunning location. Watch out for race opportunities next year in Lausanne and start making your preparations for the 2019 Grand Final.

Great thanks to the LOC who provided us with the photos from Oreste Di Cristino and for the great video from Jon Viey (jonathanviey.com) 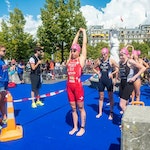 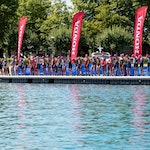 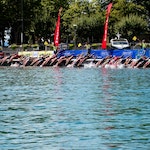 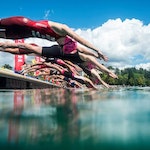 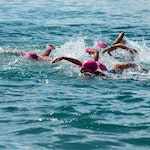 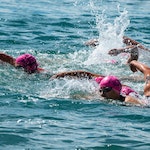 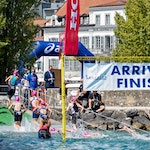 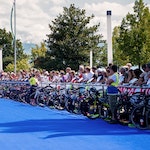 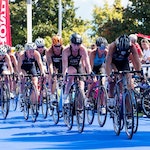 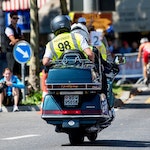 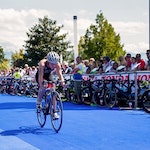 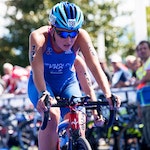