Coldwell supreme and Varga shows a clean pair of heels.

A really busy day in Tartu saw the two junior races in the morning, a quick break for the medal ceremony and back to the swim start for the Elite Women.

This was a race that was going to be tough for everyone. Quite simply, with Sophie Coldwell in her current form, she was going to be the one to try and catch. Her win in Tiszaújváros and her supreme swim / bike combo, added to her power on the run meant that she would either have to have a bad day at the office, a technical problem, or a crash to see her not on the top of the podium. 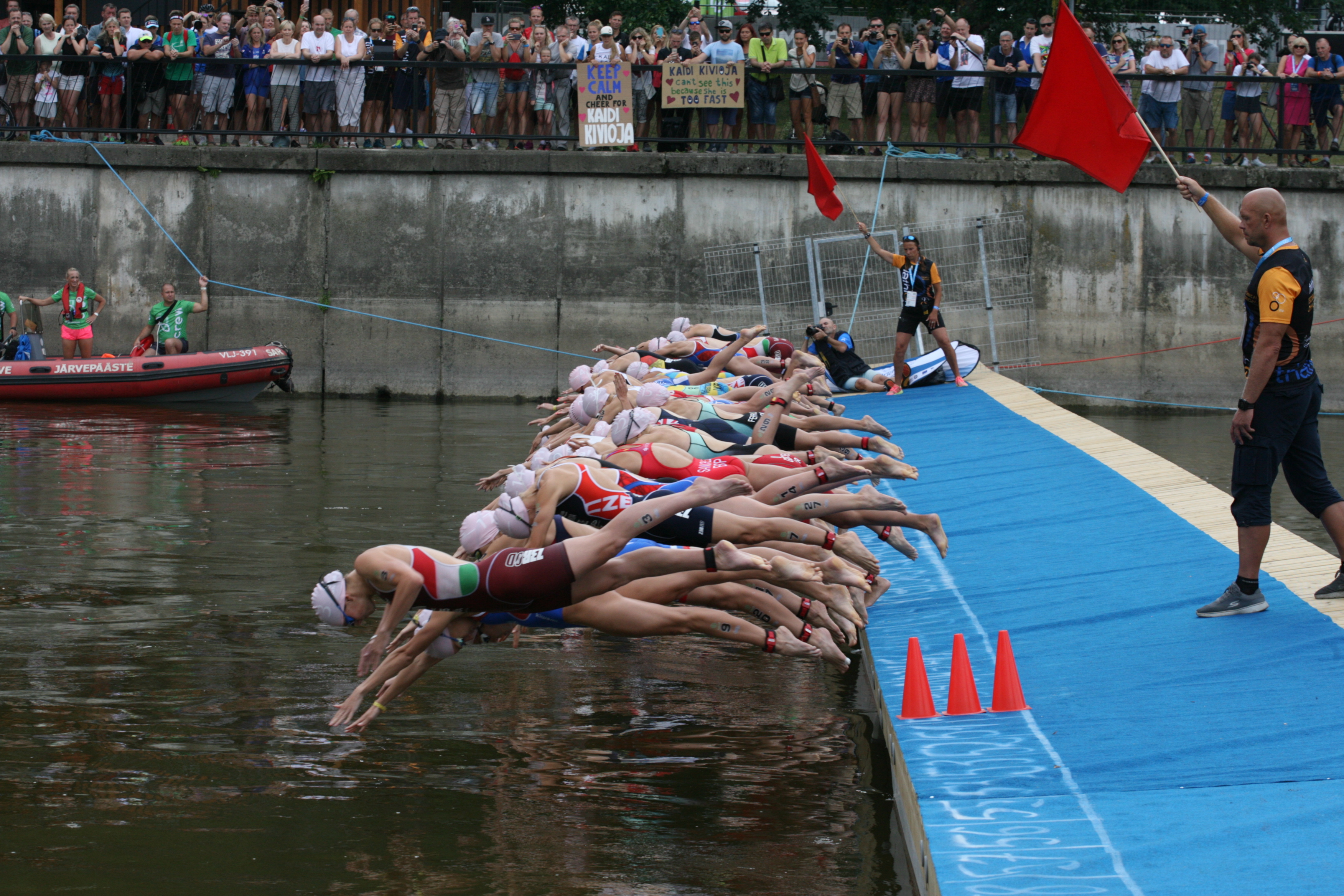 As they lined up and went out onto the pontoon to select their positions, she was alongside some strong swimmers and without her usual support from Jess Learmonth, she would rely upon the likes of Zsanett Bragmayer HUN, a returning to form Maya Kingma NED, Sophie Alden GBR and Helena Carvalho POR.

Kingma led these athletes out of the water and onto the long run to T1. With Alden and Carvalho dropped, the athletes were joined by Anastasia Gorbunova RUS and the four set about pushing the pace so as to create as big a gap as possible. They had all looked at the form-books and knew that the danger lay in the fast-running Russians. Alexandra Razarenova and Ekaterina Matiukh both raced in Weert. It was gold for the St Petersburg-based Razarenova but a crash put out any chance of a podium for Matiukh. Recovered and looking strong, she was well-placed in the chase group and Razarenova was in a smaller group behind. 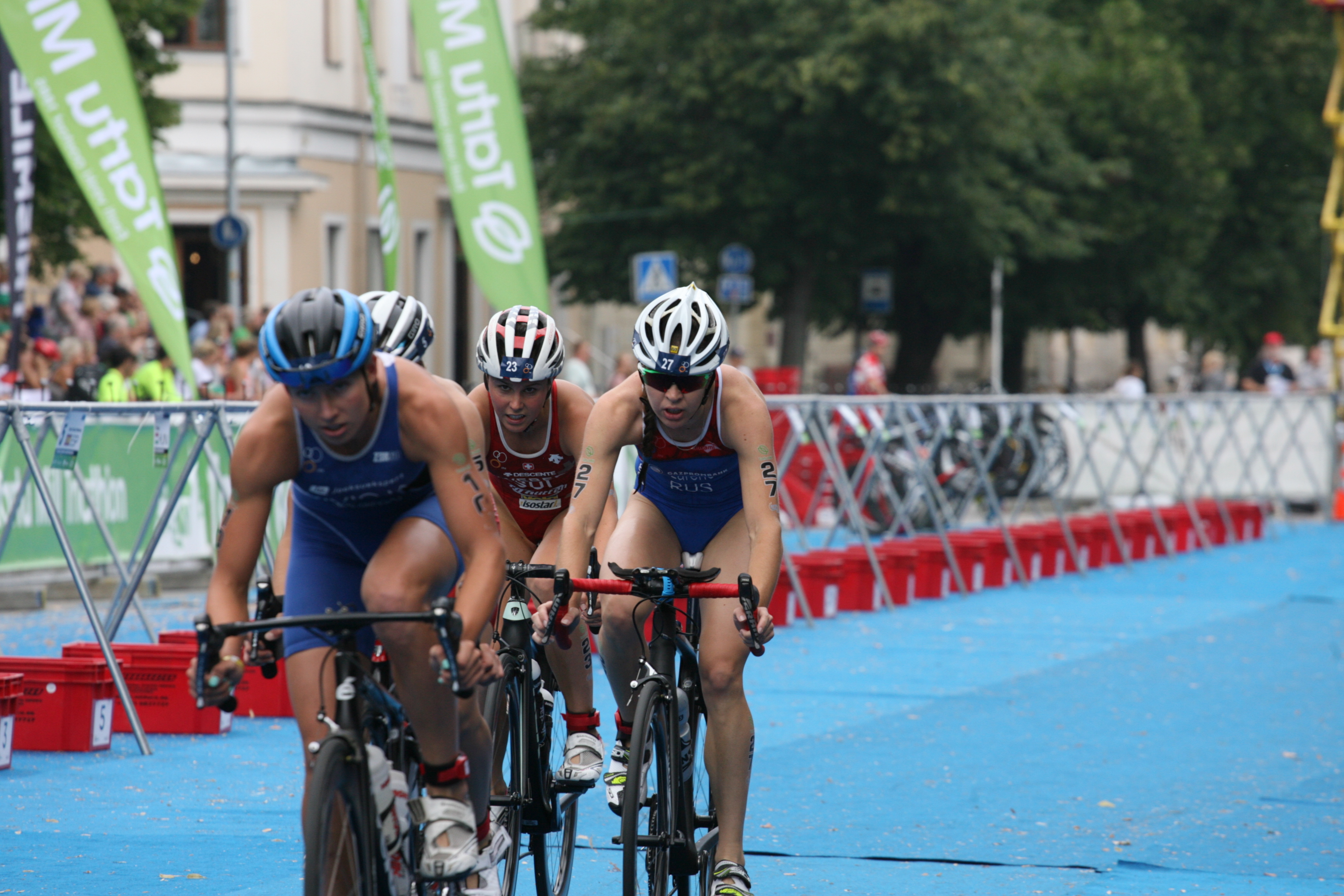 With local star and ITU Development Team athlete, Kaidi Kivioja putting gin the ride of her life, the crowds went wild with their cheers with each lap. 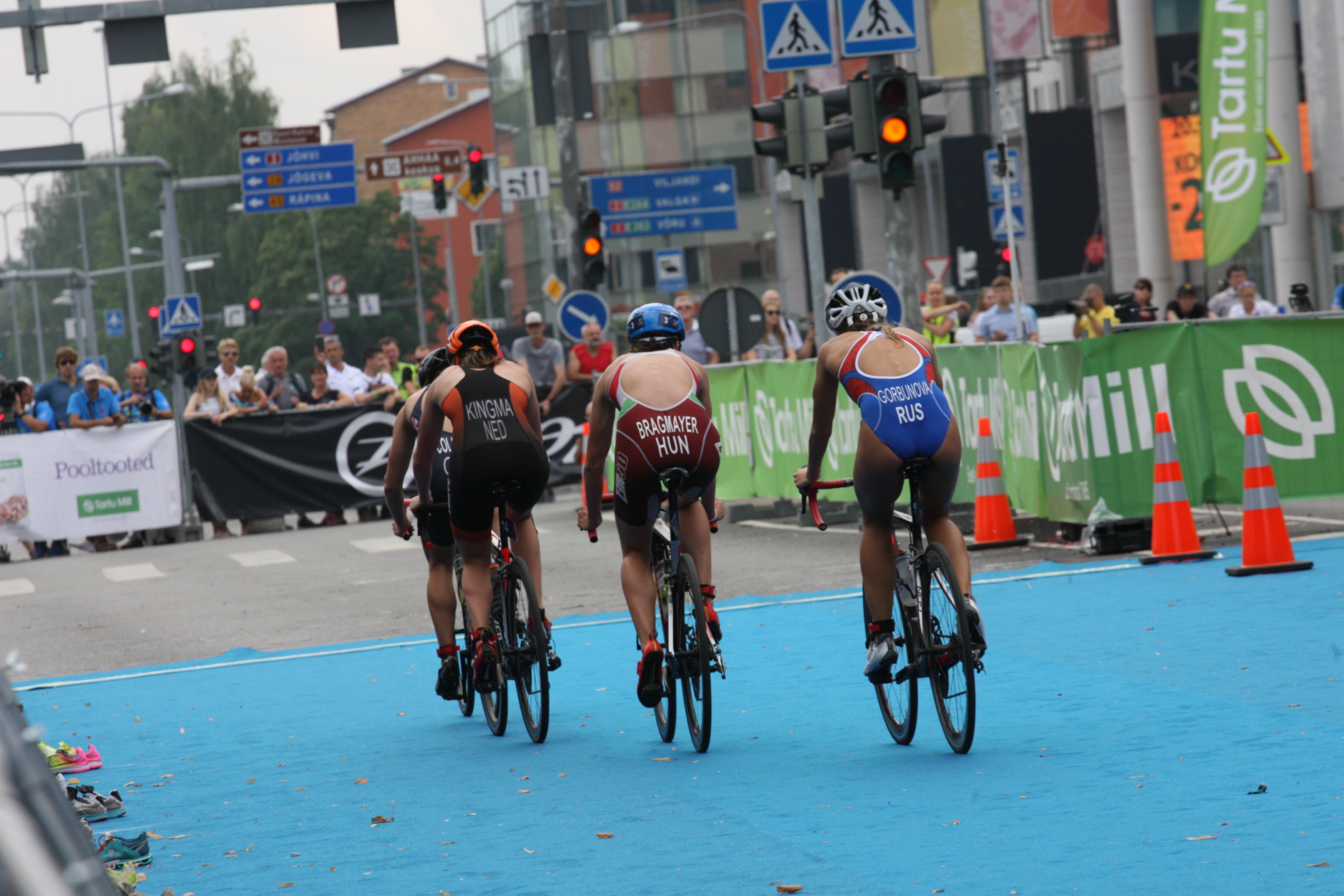 Matiukh broke away from the chasing pack and tried to bridge the gap. 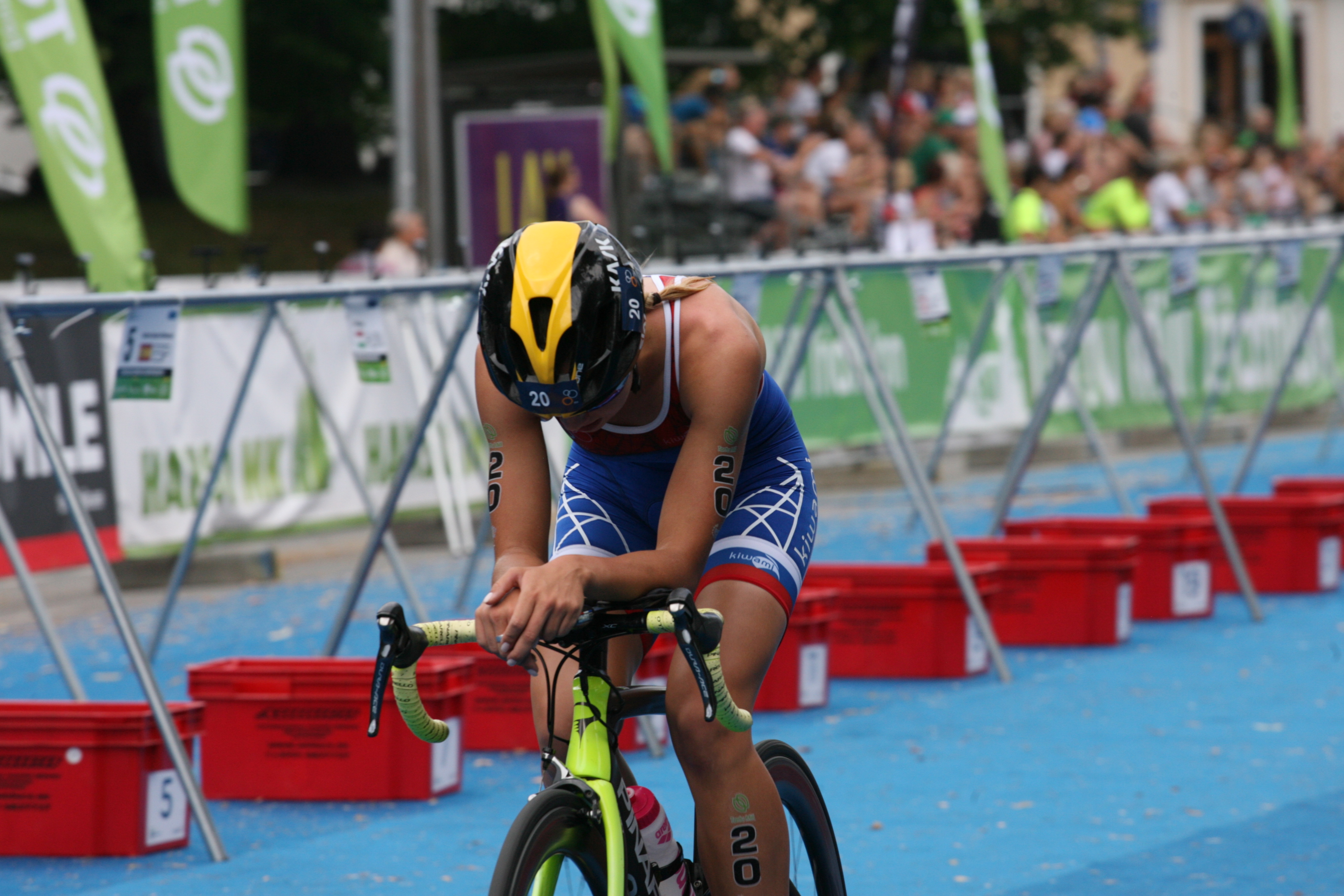 Head down and working hard she managed to hold the leaders in sight for almost a lap before deciding to save her energy for the run and slipping back to the peloton. 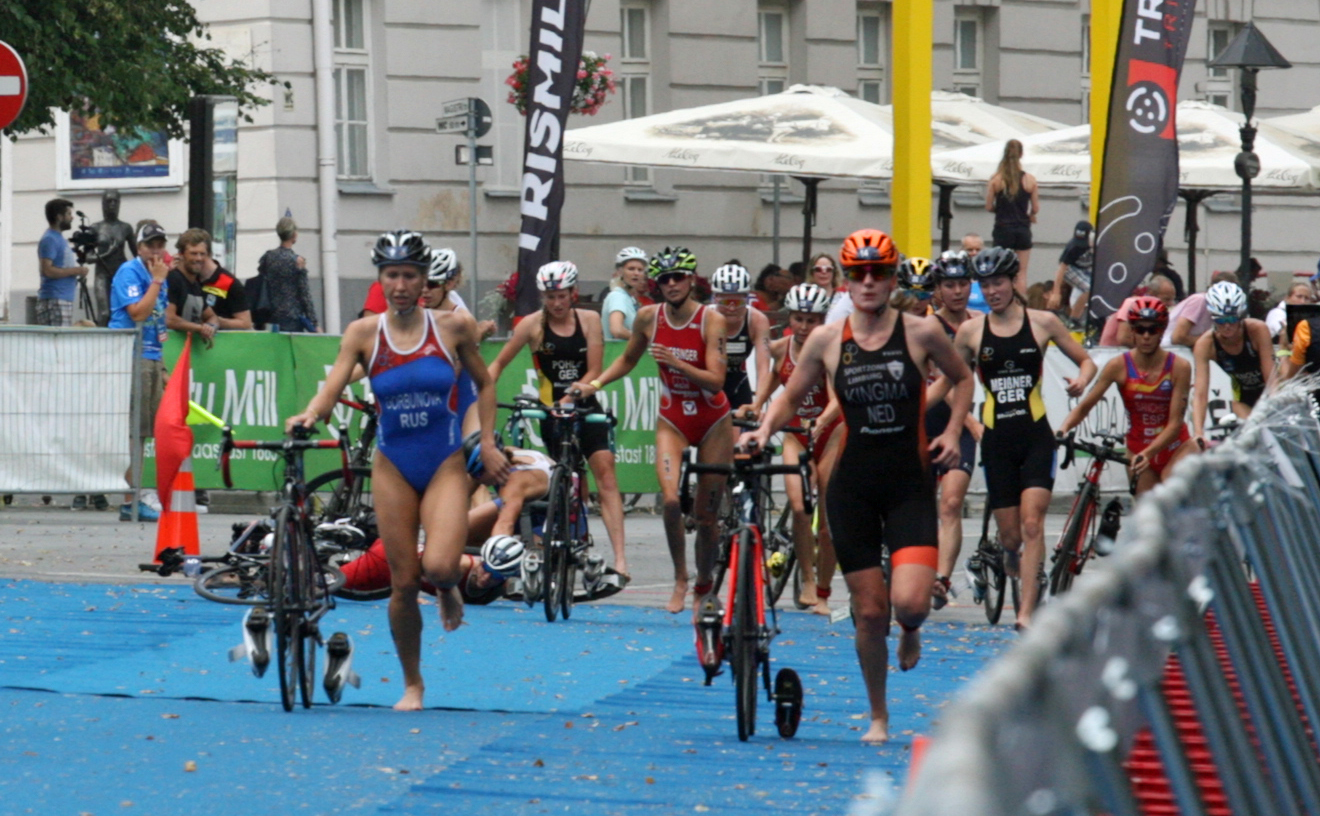 A clash of pedals sent two athletes crashing down at the dismount. There was a gasp from the crowds as they realised it was Kivioja. With shoes, bottles and bits of bike left behind them, both athletes got up, dragged what was left of their bikes through to their rack location and, shoes on, sped out to the run.

They had almost caught the leaders but with a swift change to the running shoes, Coldwell was in command and eating up the 5k. 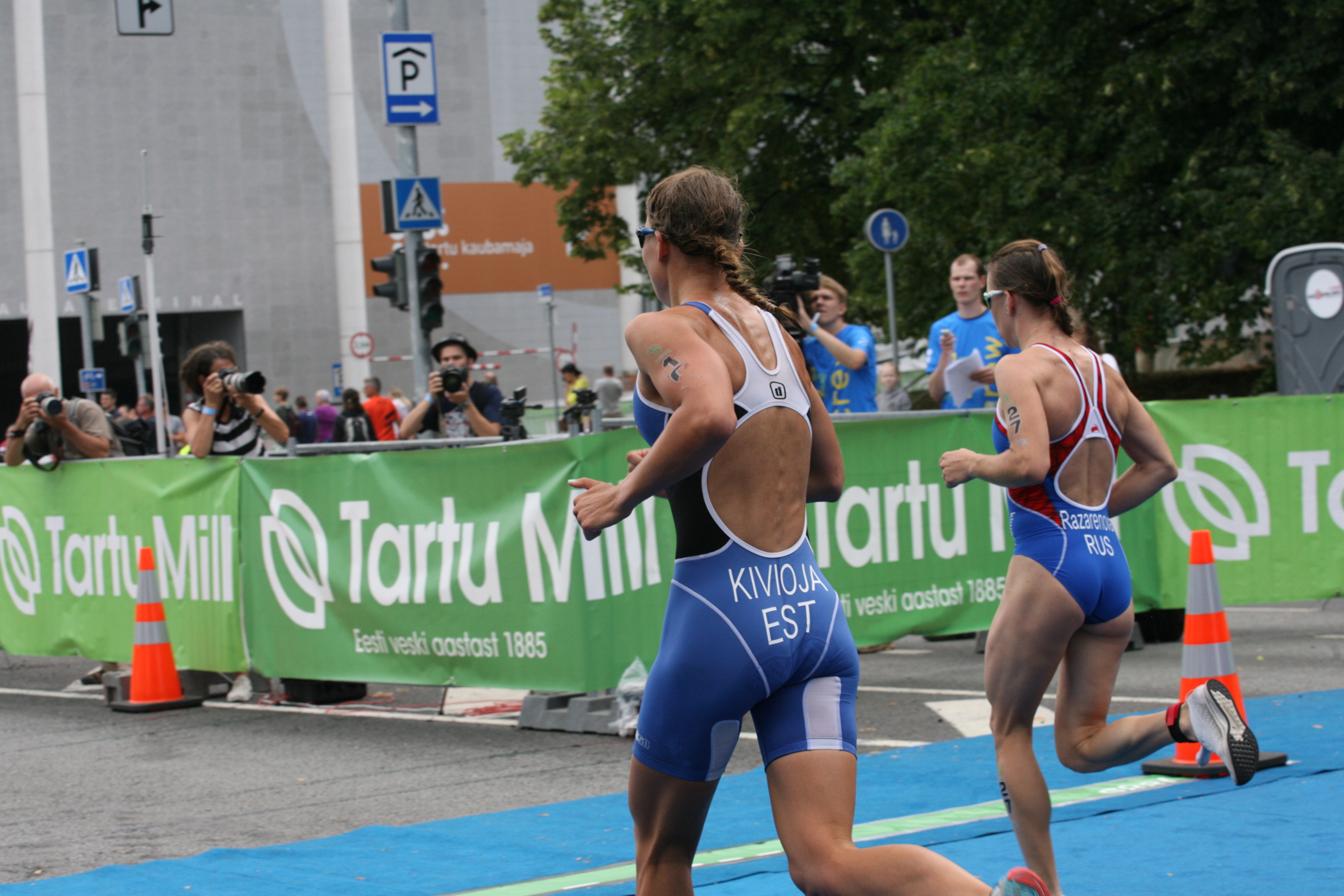 With Bragmayer and Gorbunova behind her, she was already making the pace. Kivioja and Razarenova left T2 side by side. There was no doubting it; Coldwell had missed out on gold last year in Kitzbühel over the standard distance but today, she was supreme and her run down the blue carpet was easy.
Behind here the battle had been fantastic and with four athletes on the blue carpet and the crowds going wild as they cheered on their local favourite, Razarenova had the race experience and pace to edge in front of Kivioja and snatch the silver. 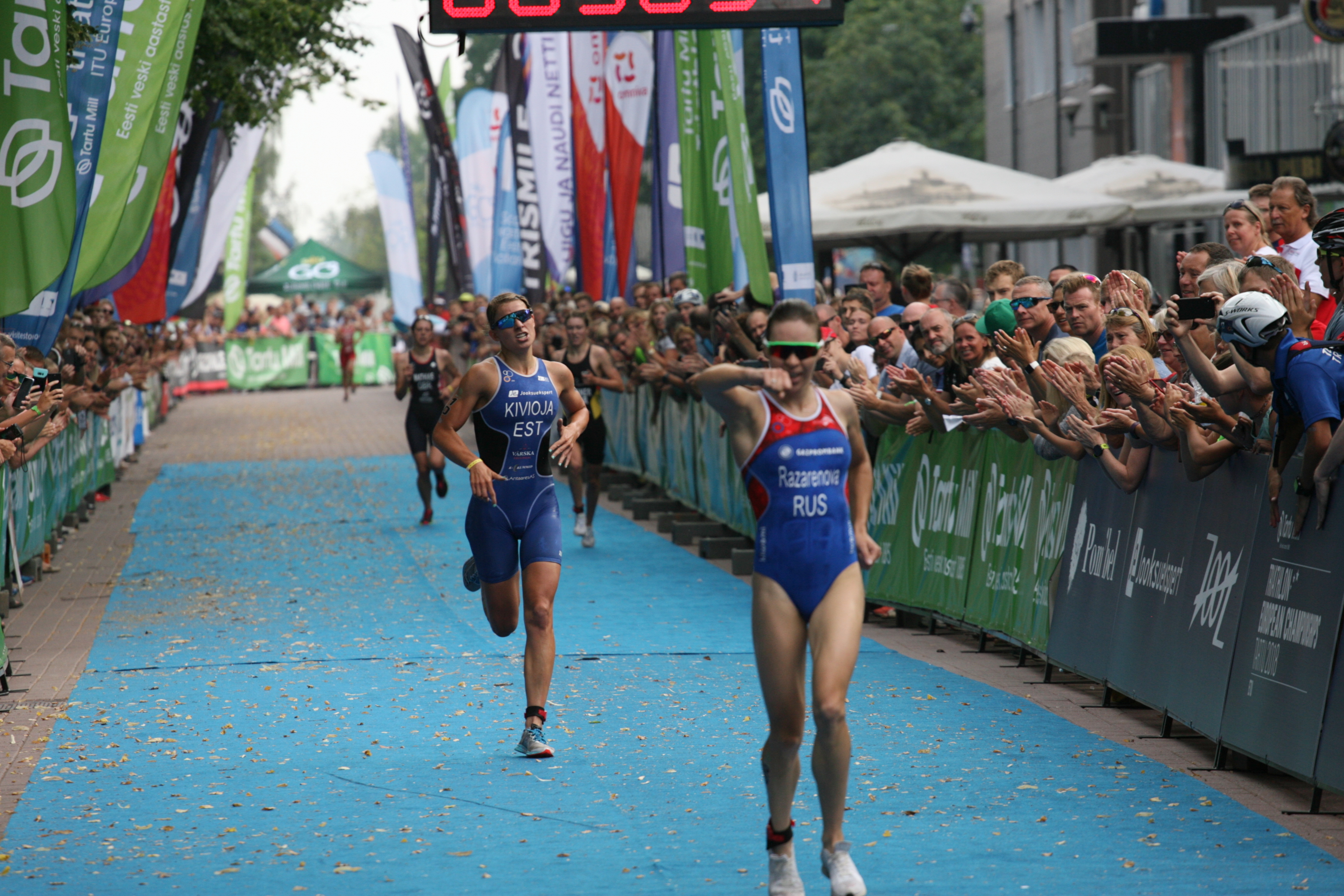 Could the men’s race be any more exciting?

Well, with Richard Varga SVK on the start list, we all had a pretty good idea who would lead on the swim. Uxío Abuín Ares ESP, was there too but has been having a pretty tough season with numerous technical problems denying him the results that we know he can deliver. 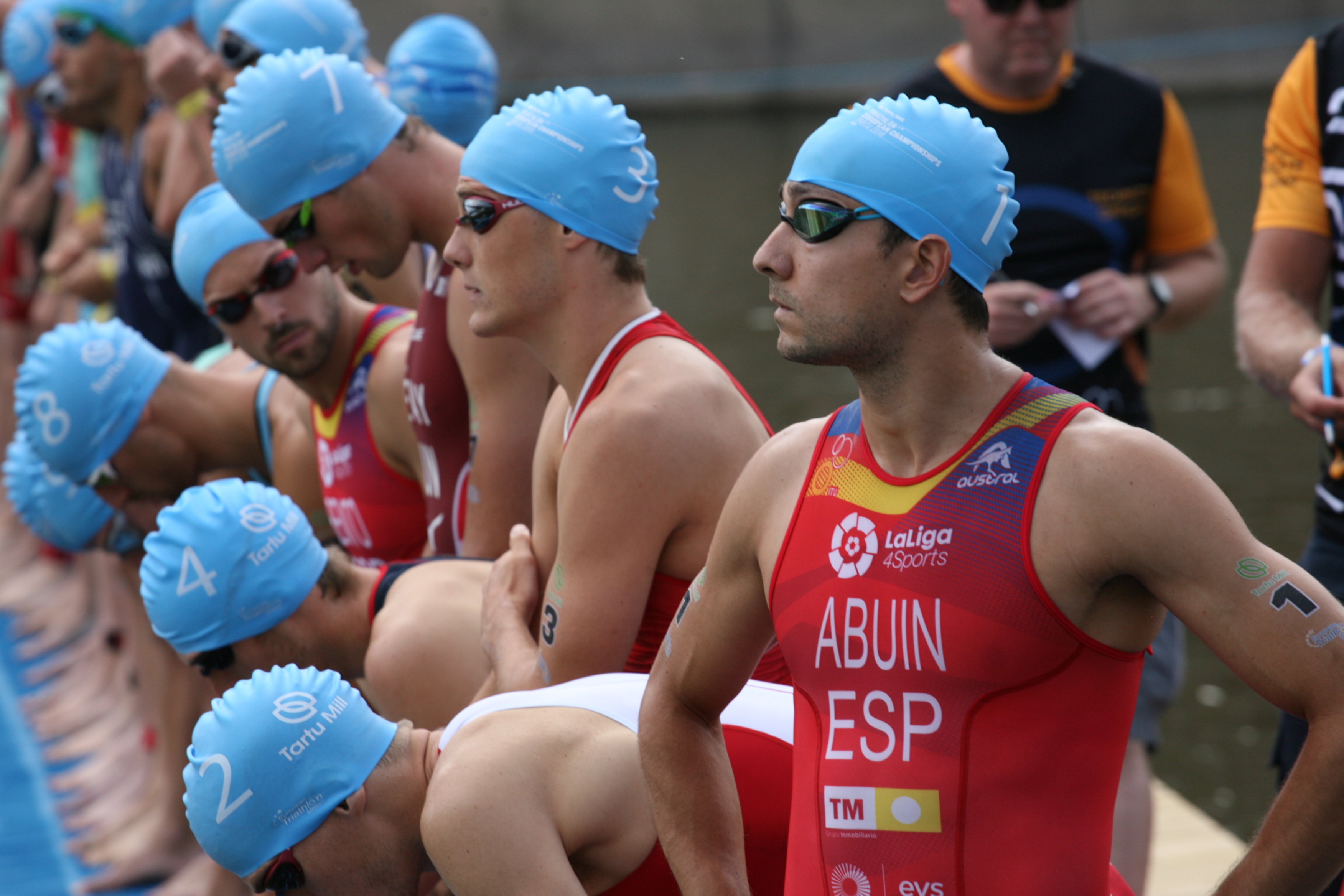 With three athletes anticipating the start signal there were penalties in T1 that might disrupt the race. To everyone’s surprise, it was not the tall figure of Varga who led them out of the water. Instead it was the slightly taller Márk Dévay HUN, who showed that whatever swimwear he chooses, he is now one of the fastest on the circuit. Pulling the Slovakian athlete along on the last section, he looked thrilled to lead the race.

As the bike developed, it was Varga at the front and working hard with Roberto Sanchez Mantecón ESP.
Y2648a
They just made it into T2 ahead of the others and Varga was instantly out and on the run course.

With Varga and Sanchez gone, it was up to the chase group to jostle for position. 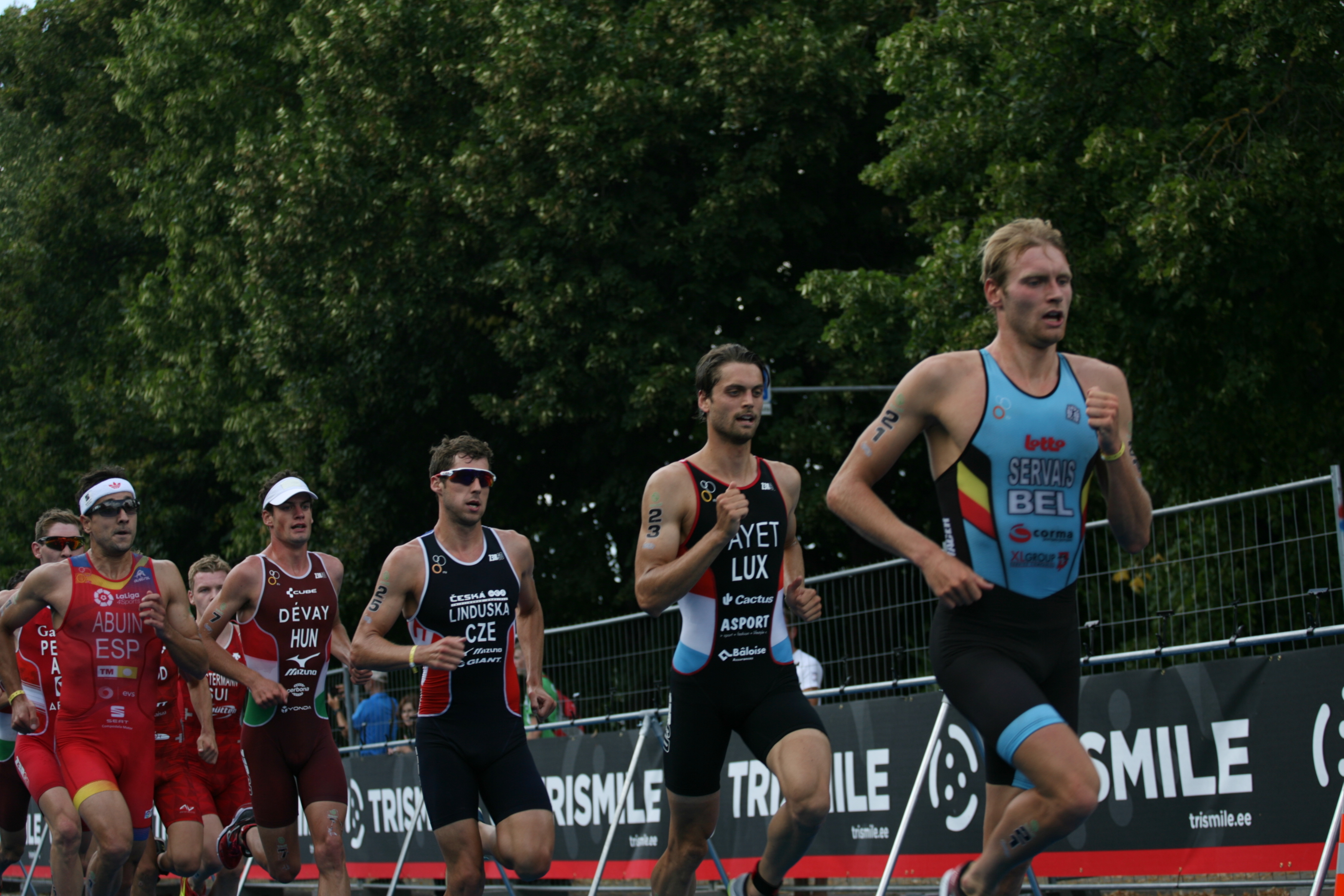 In that group were some very fast runners and with the reigning Irish Champion, Con Doherty tucked in, there was suddenly some hop amongst the many Irish fans who had made the journey that he could not only get a top ten position but perhaps even a top five or, perhaps snatch a medal.

Abuín worked hard but suddenly he was joined by František Linduška CZE. He looked strong and was running easily. Could this be a Czech / Slovak podium?

As Varga ran the last few paces to the line, there were four athletes, neck and neck, all determined to claim the remaining two medals.  It had been a cat and mouse battle out on the technical and hilly run course, with Doherty taking the lead and being caught, with Abuín making a break and being caught and with Sanchez testing the others.  Linduška looked as if he was hanging on but was still in with a chance. 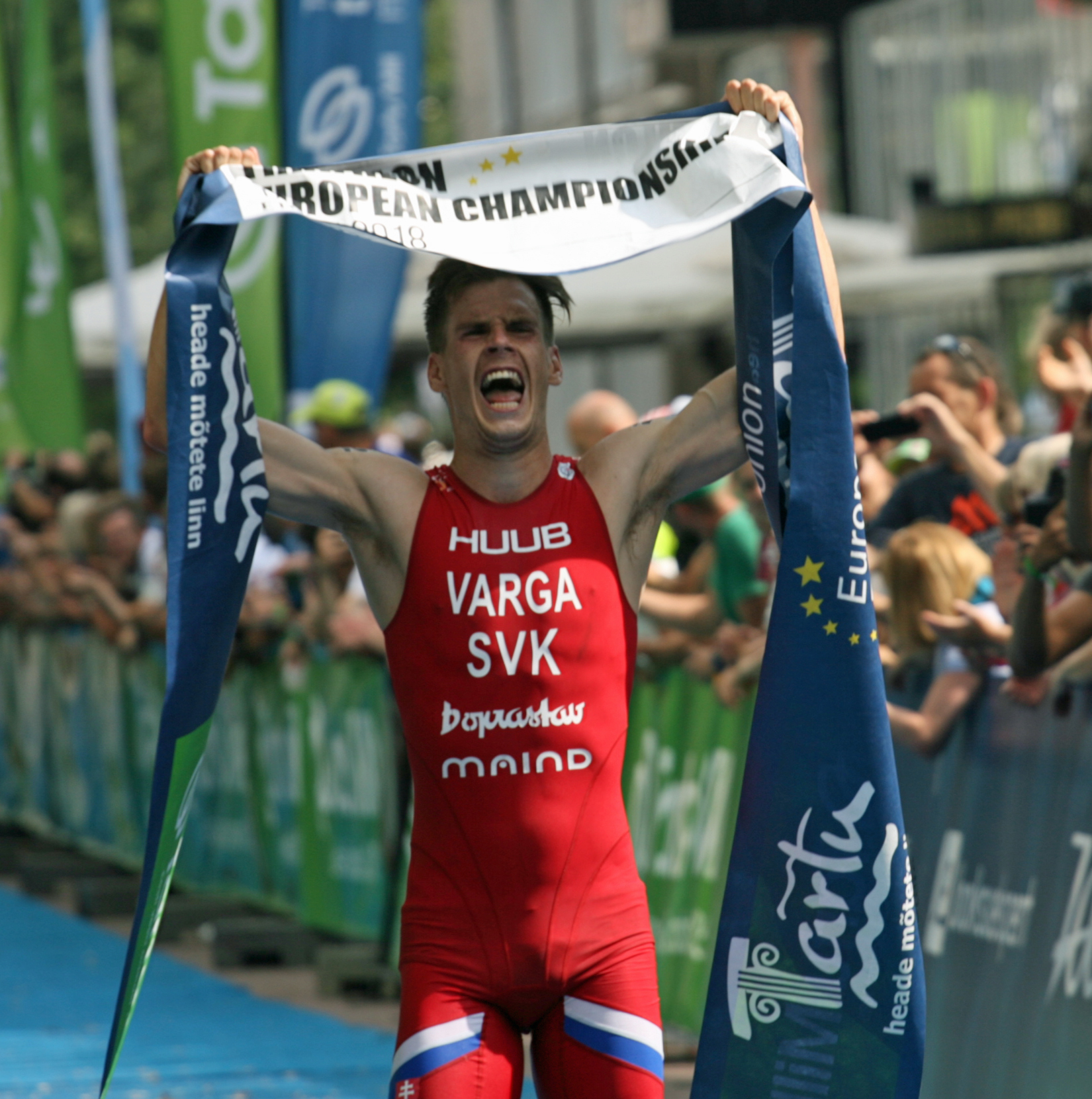 The finish tape in his hands and the title, “European Champion” ringing in his ears, Varga had done it. After waiting for so long he got the title he had so wanted. 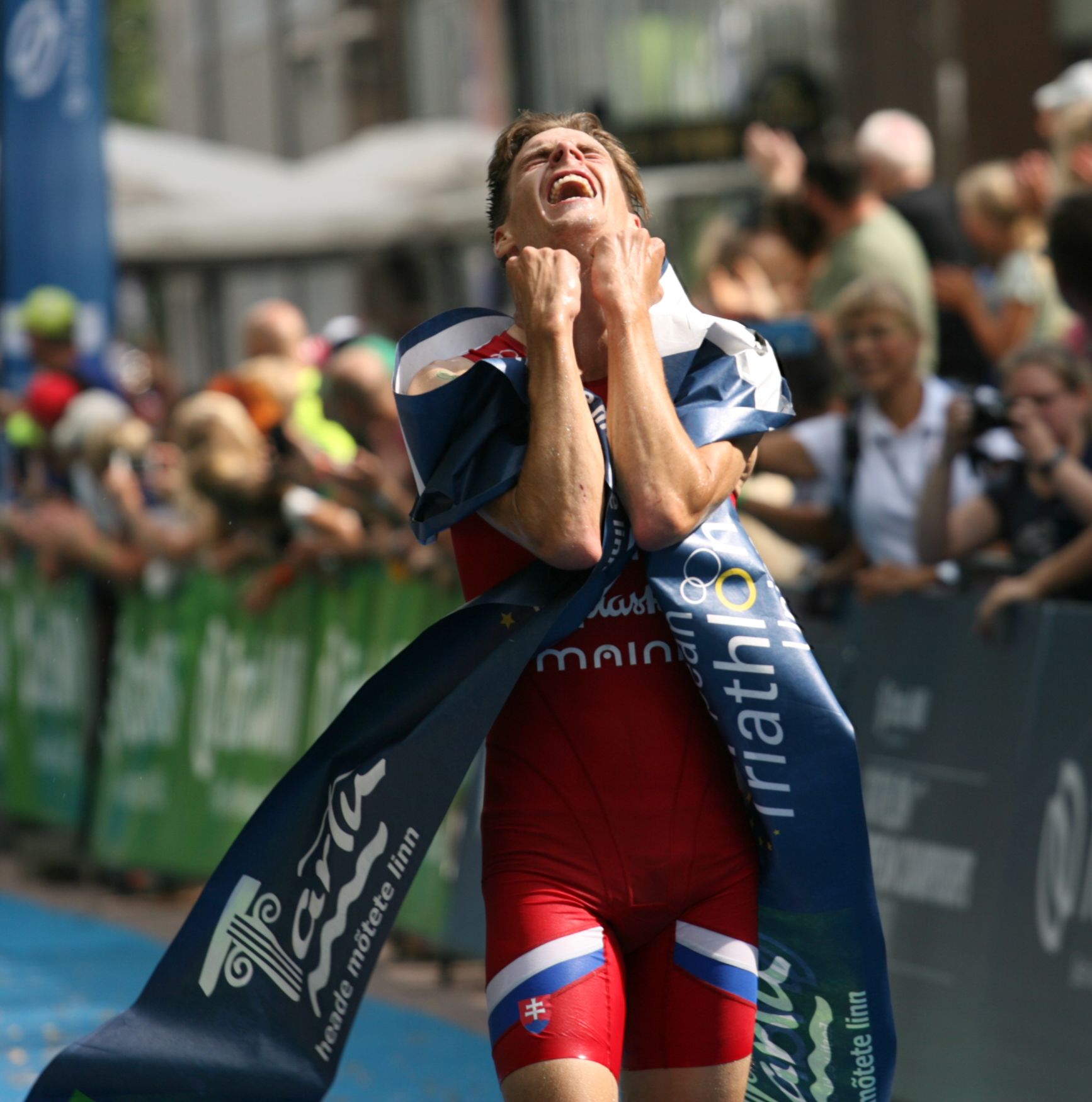 Then the noise from the crowds, already at ear-splitting level, went up as Abuín found that extra gear and dropped his teammate. After post-race interviews, selfies with the crowds who pressed hard against the fence to say their congratulations, the three athletes went to the finish gantry for a final photo, having delivered one of the most exciting men’s races we have seen in many a year. 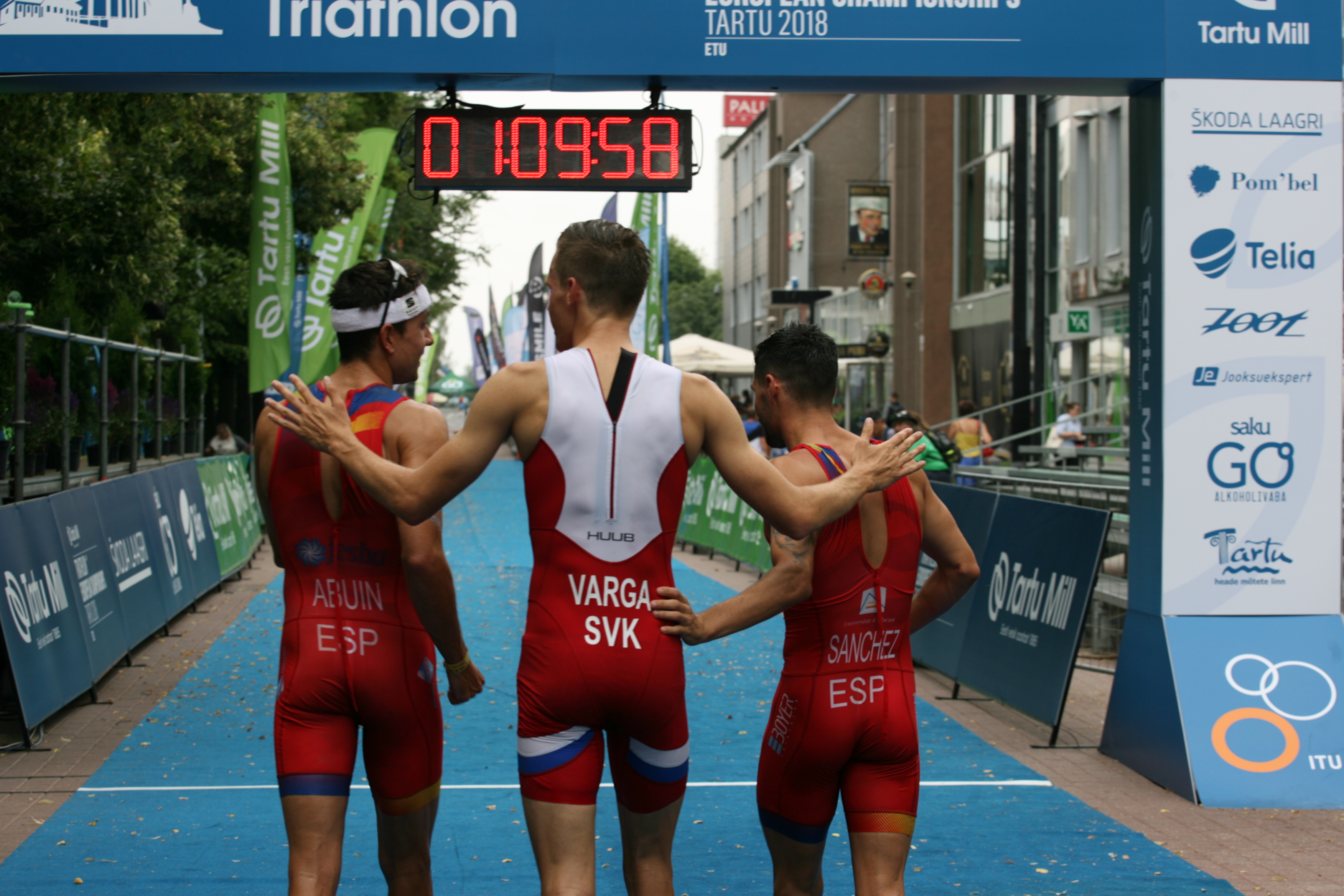 The crowds gathered for the medal presentation and cheered the elite athletes as they enjoyed their moment of glory. 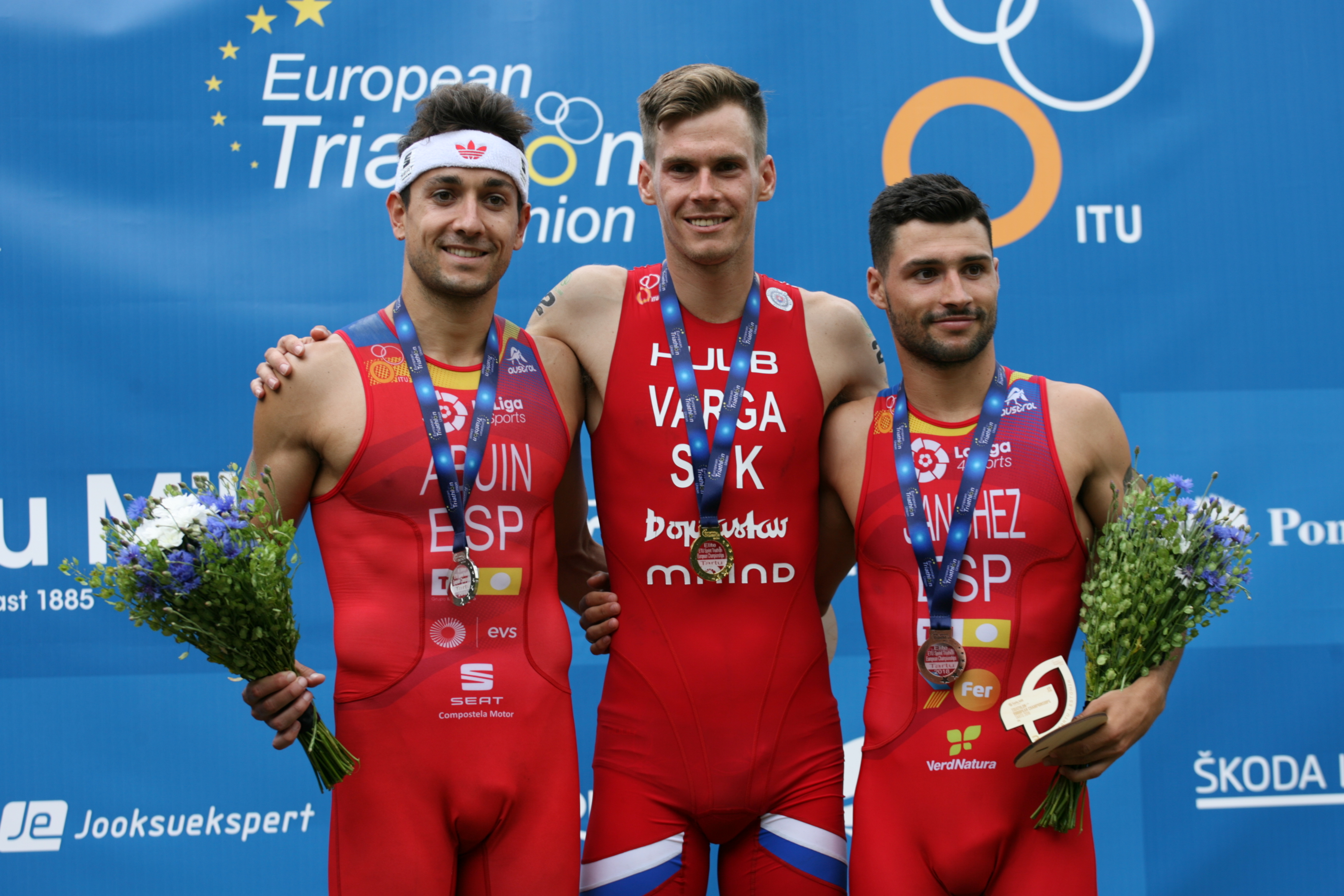 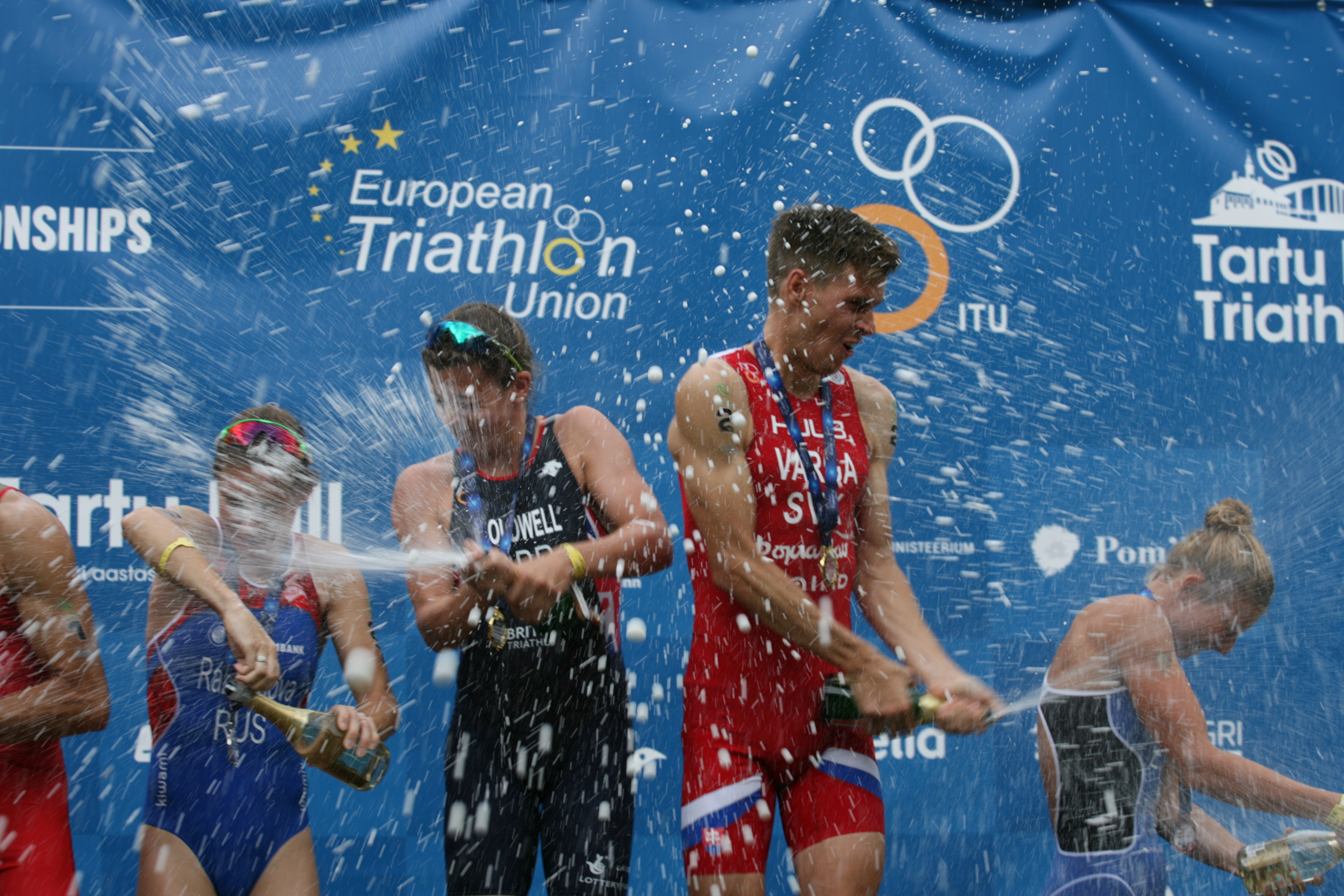