The teams of young athletes were introduced in exactly the same way as the Elite Teams in Hamburg, almost at the same time. A wonderful synchronicity across Europe where we all know the best events are to be found.

The relay format is the same as for the Elite, with four team members; two women, two men. The women started the race and with 24 Teams starting, the line-up looked impressive.

The short but fast swim took the athletes around the lake in front of Hotel Romantic and as the athletes made their way around the course it was impressive to see that the power of the athletes was pretty much the same, with no massive break away and with the athletes all exiting the water in the space of just a few seconds

Leading them out was Hungary’s Dóra Rojik with Magdalena Sudak POL and Daria Lushnikova RUS and Alžběta Hrušková CZE on her tail. 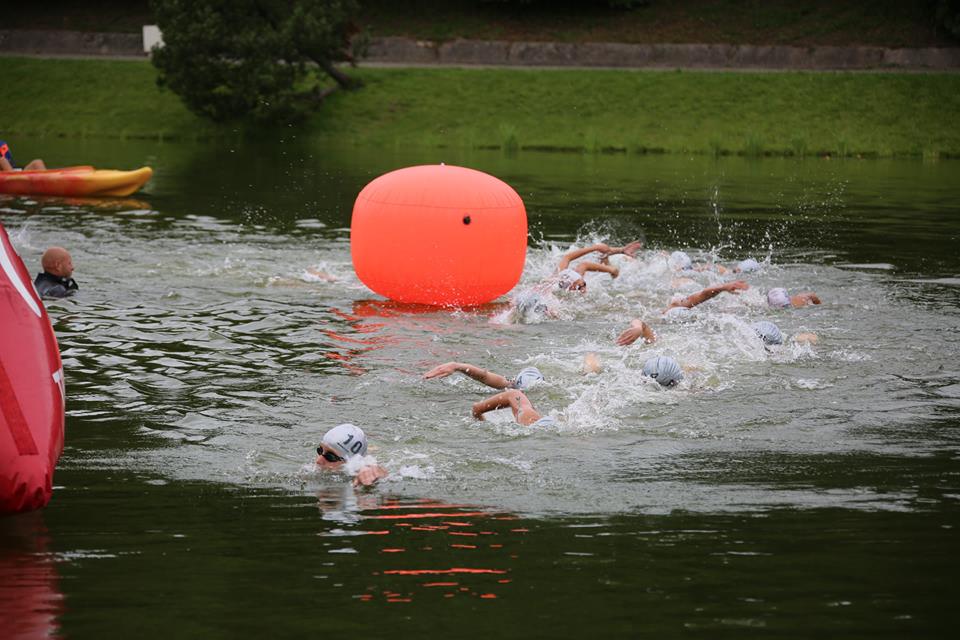 A tough run up from the water’s edge to T1 gave some of the stronger runners an advantage and Beatrice Mallozzi ITA, Freya Thompson GRB and Jessica Fullagar FRA made it look so easy.

For the first few minutes of the bike, the lead was held by Hungary, Russia, Poland, France and Great Britain.

With the athletes from the first leg out on the course, it was a chance for the remaining athletes to warm up and focus on their short but oh, so important race.

The bike course soon brought the majority of the women athletes together and they rushed past transition, in a safe parallel section (like the design here LOC – very good and very safe!), in a flash, led by Hagar Cohen Kalif ISR.

The leading group came into T2 with a swift dismount and an even quicker change from bike to running shoes. Honestly, to see the speed that these youth athletes mastered T2 was impressive and shows that all the hard work over recent years from the Development teams around Europe has really paid off.

The twisting sections of the run course at the start of the run gave once again the stronger runners the chance to accelerate out of the bends and take advantage. Soon it was Fullagar and Inês Rico POR who were leading the pack. Mallozzi soon caught them with her powerful striding run. Luxembourg’s Eva Daniëls bridged the gap. Thompson kept them in her sights and the athletes ran around the perimeter of the lake as spectators cheered them along. 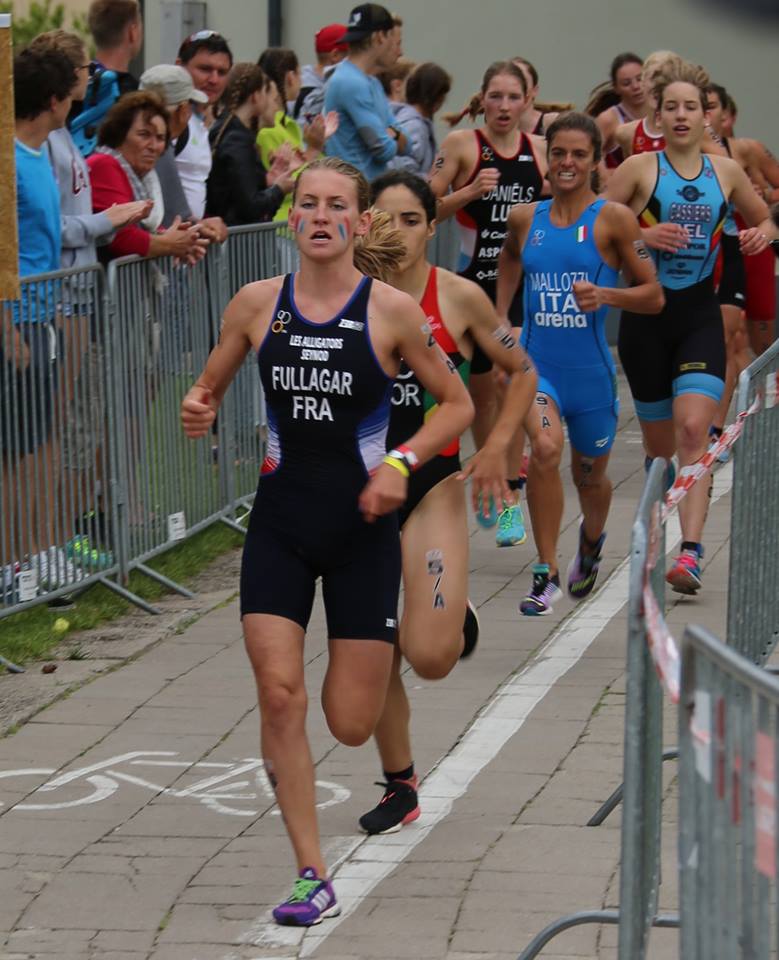 Fullagar, Rico and Mallozzi showed real strength and power as they pulled away from the other athletes in the back straight and they led into the handover, which was watched by hundreds of spectators. 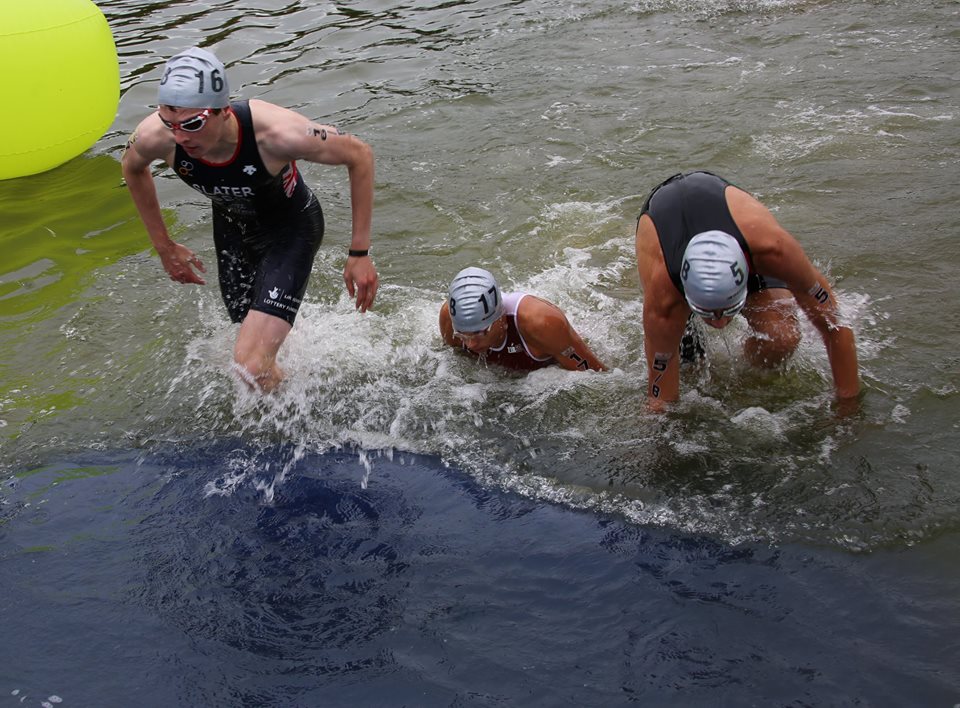 The handover went smoothly and then it was then Boris Pierre FRA, José Vieira POR and Nicolò Strada ITA who pulled hard in the water to ensure the lead created by their teammates but in the later stages of this short swim, they were joined by two more and it was Strada who led them out onto the climb to T1. Just behind him came Slater and then Vieira, with Pierre losing a few metres.

It was out on the bike that, pretty much, the medal positions were set with Italy, Portugal and Great Britain creating a massive lead with some determined and powerful chain-gang riding. Almost 20 seconds on the first lap. These three raced through T2 and it was Vieira who led Slater and Strada out onto the lap around the lake, with a lead of some 30 seconds over the chase. 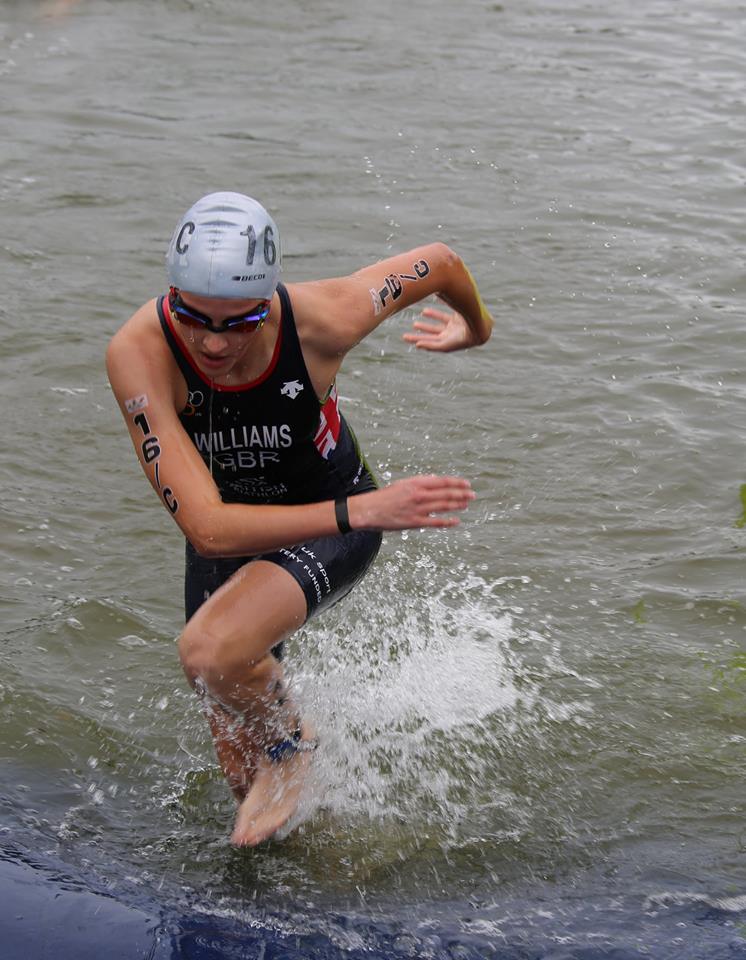 An amazing display of running saw Slater take command and with seemingly effortless ease, he handed over to Abbie Williams for the third leg. She had clear water in front and behind her but with Portugal and Italy determined to grab a medal, she had to dig deep to hold onto that lead. 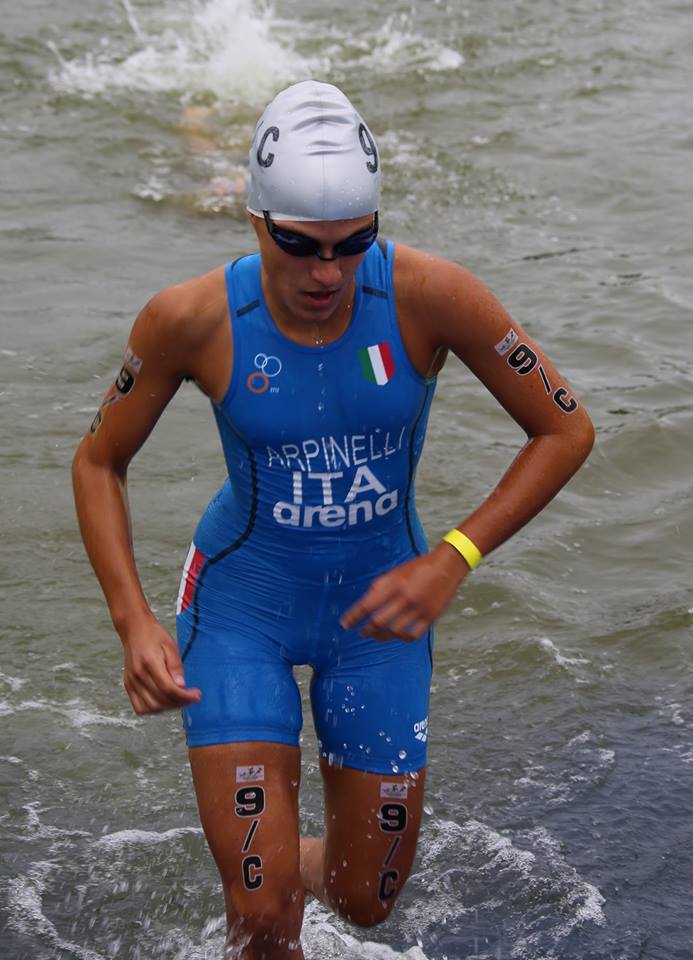 Gabriela Ribeiro POR and Costanza Arpinelli ITA came into T1 to see Williams disappear off the blue carpet and it was Portugal chasing, with Italy losing valuable seconds as the helmet would just not fasten quickly enough.

Williams, in true Team GB style, set the hammer down and with Ribeiro only a few seconds behind her on the bike they established a lead of almost 30 seconds by the end of the first lap. Arpinelli was joined by Anja Weber SUI and Audrey Ducornet FRA.

Coming into T2, Williams had the lead still, with Ribeiro just a fraction behind her. Ducornet led Weber out onto the run with Arpinelli now chasing to keep her team in with a medal chance. 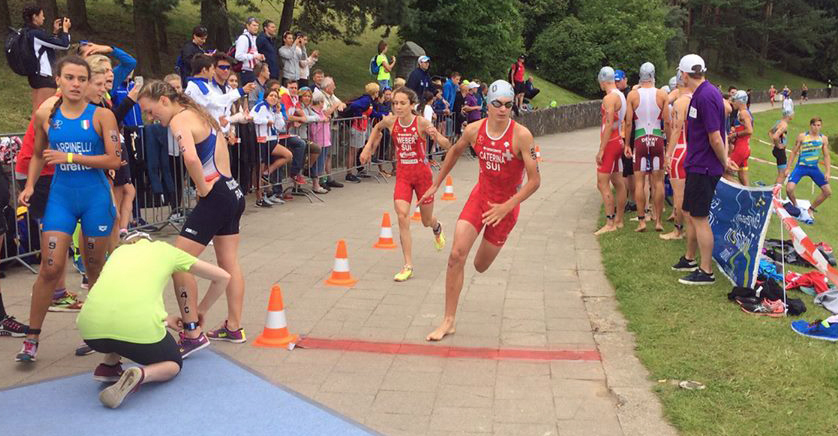 Williams ran well, held onto the lead and handed over to Matt Willis who was soon chased by Ricardo Batista POR with Florent Lefebvre FRA and Sasha Caterina SUI some 10m back. As they rounded the first buoy, it was neck and neck for Great Britain and Portugal and exiting the water, it was Willis just one stride behind Batista. 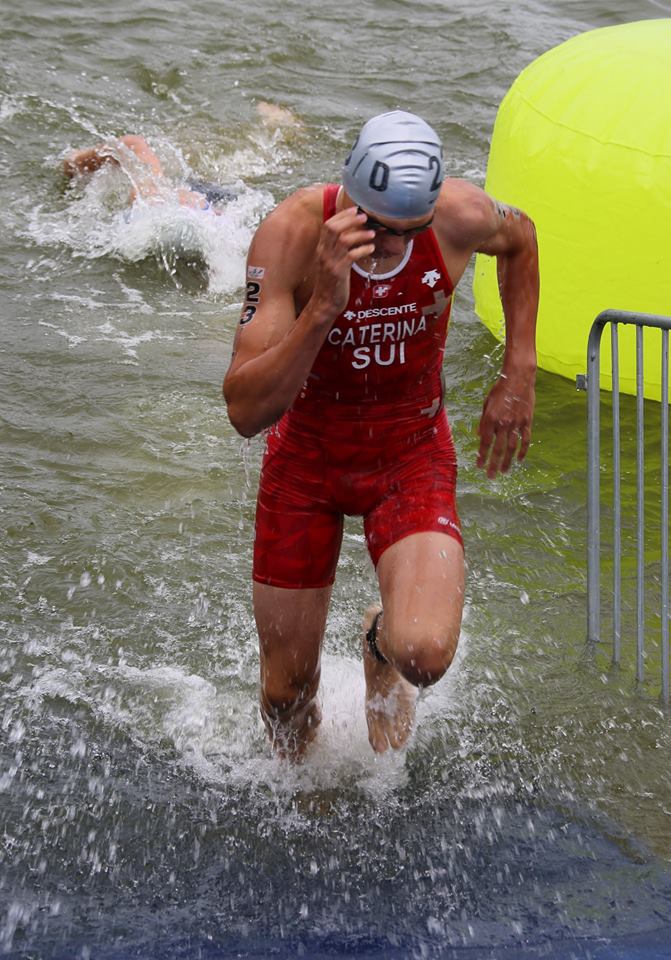 Having swum wide, Italy’s Davide Ingrilli led Caterina and Lefebvre onto the blue carpet and to the racked bikes.

Soon Batista and Willis had broken away and were tearing around the short bike course. As they sped past Transition, some of the slower athletes were just entering T1 and it was now that we could see the sensible design of the course, with the separated lane for the laps that enabled slower athletes to safely move through transition from the swim and to avoid the risk of being pulled out of the race.
The very last athlete entered T1 just a few seconds before Batista and Willis finished their bike. It was a tense moment for the officials there, because if the fast-moving Portuguese and British athletes had arrived a few seconds earlier, then the last athlete would had had to been recorded as “LAP” and his race would have been over. You see, the design of a relay course is much more complicated than for any individual event.

Batista and Willis were now racing for gold and silver. Willis wasted no time and led them out onto the 1.2k final run. Lefebvre and Ingrilli came into T2 just a few seconds later and for them and it looked like the battle would be for the last place on the podium between France and Italy but behind them came Caterina and his pace took him past Ingrilli in the early stages of the run.

Ahead of them Willis was stretching his legs and pulling away from Batista in another fine display of running. It was pretty much over by the first 500m with GB making a massive mark on the race. Looking over his shoulder, there was nobody there. Willis had done it for his team and was joined by his teammates for a very British, rather restrained moment of jubilation.

Batista was mobbed by his team as silver went to Portugal and Lefebvre did just enough to claim bronze for the French. 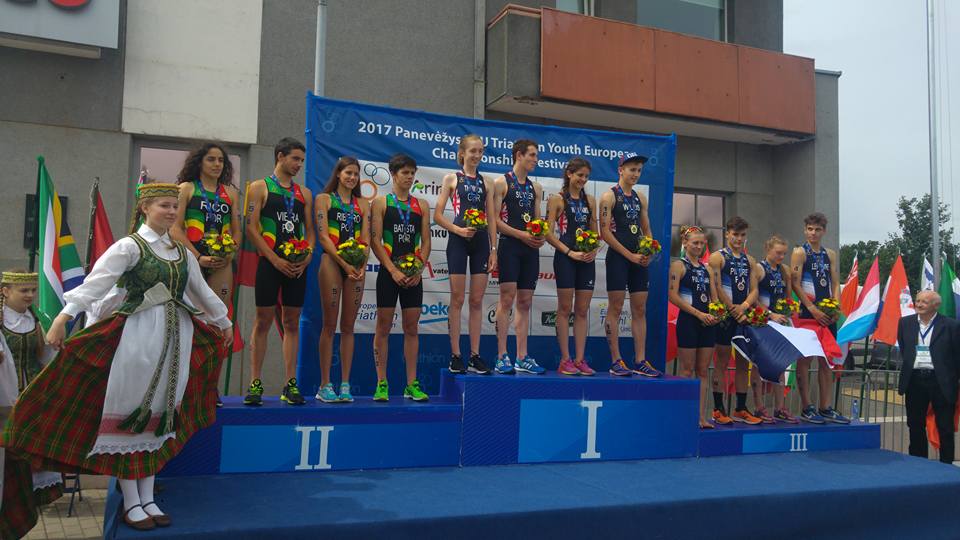 With a spectacular awards ceremony, featuring Lithuanian traditional dress, the medals were presented to the athletes by ETU Honorary Member, Krzysztof Piątkowski, flowers were presented by ETU Executive Board Member, Maria Cherkovskaya-Tarasevich. 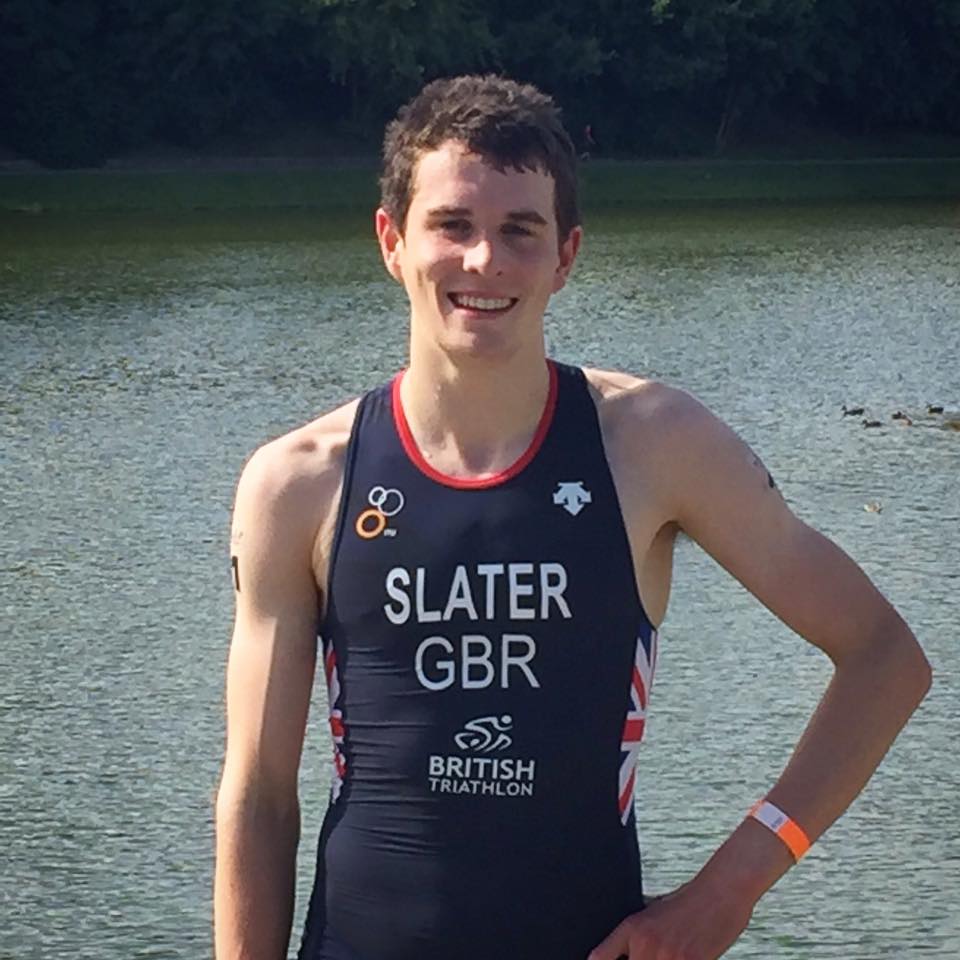 Great Britain’s Dan Slater said, “I’m really happy to take the win and improve on my 13th place from last year. It was great to share the podium with my relay team mates too.” 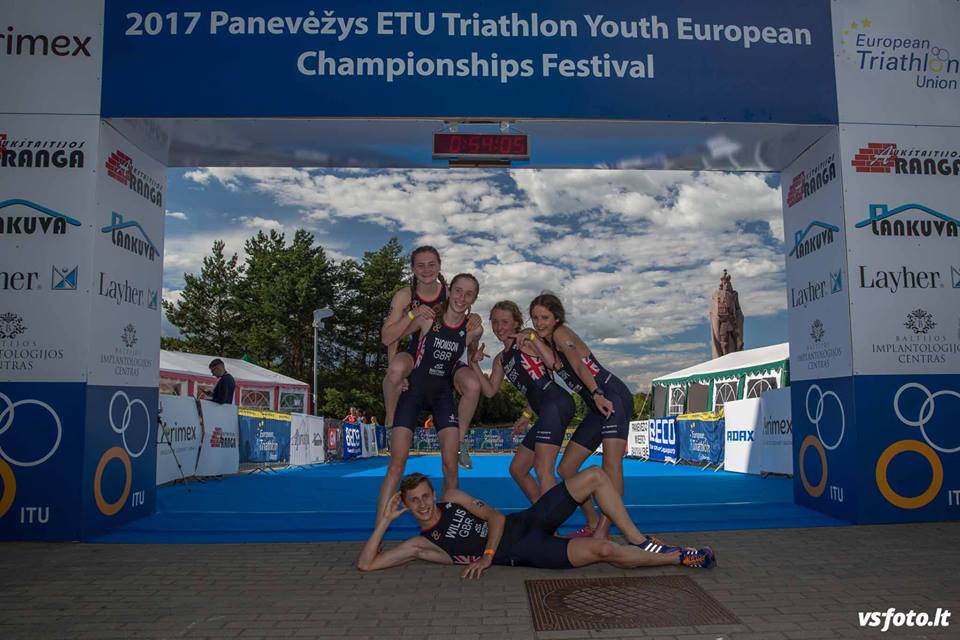 British Triathlon said, “It is hoped that these athletes will have been inspired, not just from the racing experiences, but also the educational support programme that has been an integral part of these European Championships. The success by the team is a strong reflection of excellent home support and coaching within clubs, regional academies and Home Nation programmes.” 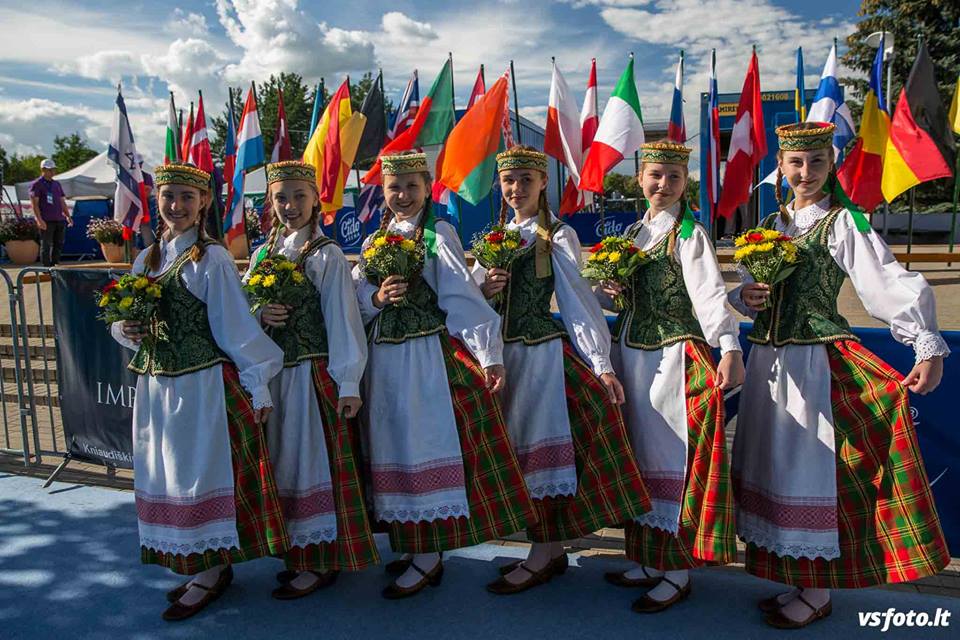 From the LOC and from ETU, “A very big THANK YOU for our photographer - Vygintas Sereika - VS-foto Sportas. All photos are spectacular! We are delighted to work with you.” You can see his photos by clicking this link.

Some of the photos in this report are once again from Christoph Totschnig. It must have been extra special for him to watch his daughter do so well in the race on Saturday.

We would also like to thank Delfi TV for their coverage of the races. Having TV companies following our athletes makes the event so much more exciting. If you want to see the raw footage of the race, please click this link (the action starts at about 18:00mins into the coverage). The action starts at about 18:00 mins with the Technical Officials leading out the athletes. Under the towering command of Race Referee, Siim Vollmer (EST) the final race was overseen by Technical Delegate Daniel Martin (AUT) who this weekend will be working in Tiszaújváros and the following weekend in Târgu Mureș. They were supported by a huge team of officials. All volunteers. All dedicated. 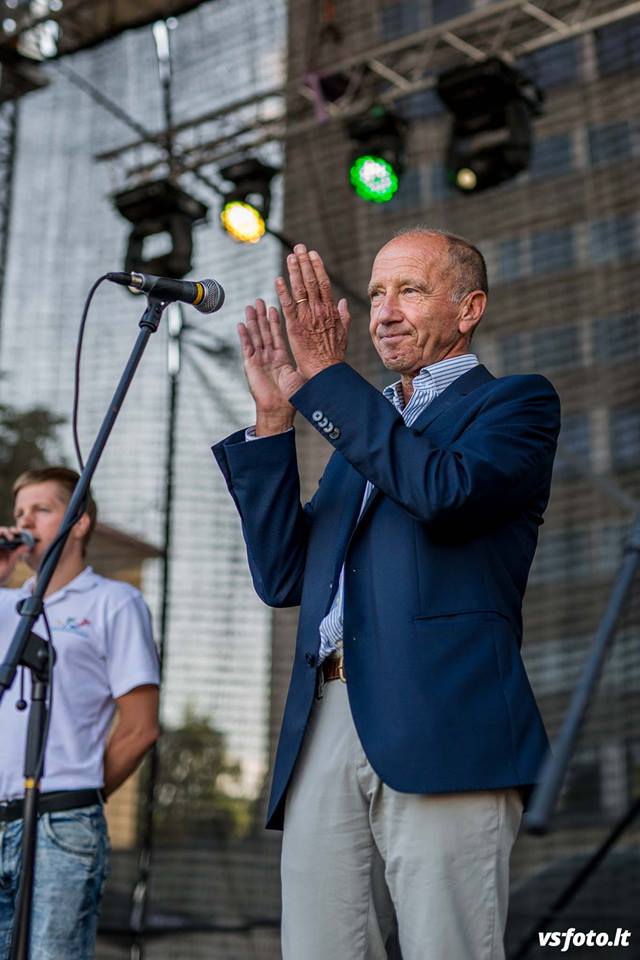 ETU President, Renato Bertrandi, who had been present for the 2016 and now for the 2017 Panevėžys ETU Triathlon Youth European Championships Festival gave his final comments, “We saw last year in Tiszaújváros what we thought was the best ever Triathlon Youth Championships Festival and everyone knew that expectations would be high for this year. I am delighted that the Lithuanian Triathlon Federation, led by Dainius Kopūstas and working closely with the Panevėžys LOC, as well as with the Technical Officials team led by Austria’s Daniel Martin have all managed together to deliver such an exciting and well-managed event.

It is not just about the racing. This Festival is an important stage in the development of our young athletes and what I saw over the four days here is most certainly strong evidence of our sport’s great and promising future.

When I look at the TV coverage from Hamburg where the Elite had their Mixed Relay World Championships, I see the same levels of determination, athleticism and team spirit as we all witnessed here in Panevėžys. The Mixed Relay is without any doubt the best finale to our Festival and I would like to thank all the athletes, coaches, federations, officials and of course the hundreds of spectators who cheered on our athletes. Lithuania – you were great!”