The excitement from last weekend’s race has hardly gone and here we are looking at the Düsseldorf ETU Sprint Triathlon European Championships. With titles already won in Kitzbühel, there are more titles up for grabs in Germany and we have seen that there are some athletes looking to collect good points from both races amongst the Elite and from the Age Group athletes even some who are in a position to win medals in both Sprint and Standard Distances. 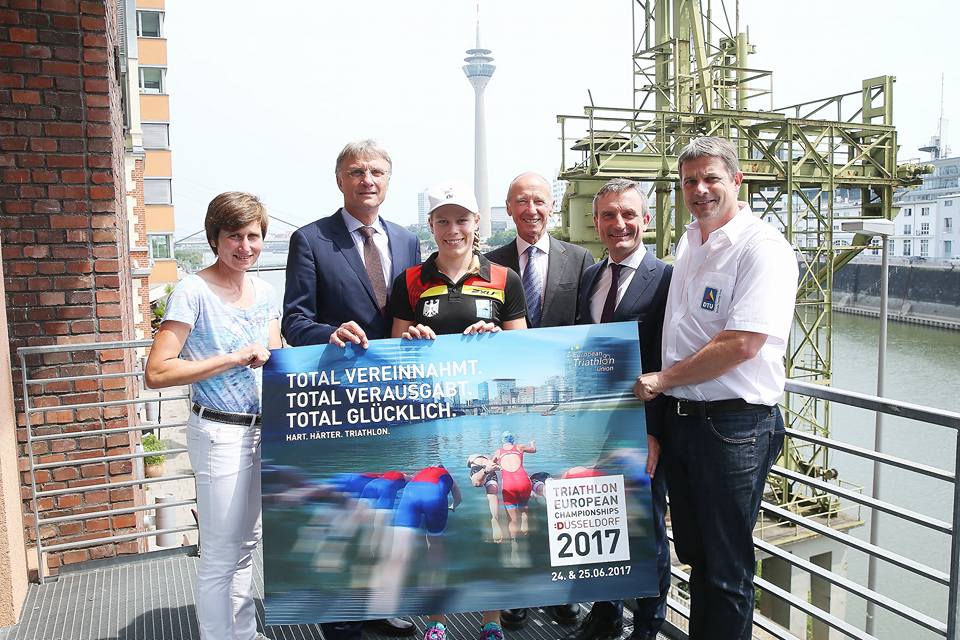 ETU President, Renato Bertrandi, “Triathlon is big and triathlon here in Europe is getting bigger. We have seen record numbers attending our championships over recent years and now, with the chance to separate the two distances that attract most participants, I am delighted that we will see the Standard Distance and Sprint Distance medals decided at different venues and in different countries.

This year, the Standard Distance Championships will be held in Kitzbühel and the Sprint Distance in Düsseldorf. The German Rhineland city will certainly be the focus of sporting activity this summer and we hope that the presence of hundreds of athletes (Elite and Age Group), wearing their national uniform and racing the 750m, 20k, 5k course will inspire those watching and set the stage for the Grand Départ of the Tour De France on 1st July, the very weekend after our races finish.

Triathlon is hugely popular in Germany and I hope that the chance for so many German athletes to race on home soil, with families and friends cheering them on, will inspire them to further and future participation on the international stage. For the hundreds of visiting athletes and their families and supporters I know that the welcome will be enthusiastic and that the hospitality will be warm. I know that with the backing of the Deutsche Triathlon Union (DTU) and under the watchful eye of our Technical Delegates, Dirk Bogaert (BEL) and Dag Oliver (NOR), the athletes will be assured a safe, fair and exciting race. It will be a busy weekend and the technical course will make it a true test for all those racing. I find the promotional material very striking and as the LOC have said, ‘The pain goes. The pride arrives. The enthusiasm stays.’ Have a great race everyone. Mach’s gut!”

Welcome to the ETU Sprint Triathlon European Championships 2017 in Düsseldorf. Ten  years  after  the  spectacular  world  championships  in  the  Hanseatic  city  of  Hamburg  2007 Germany is once again host of an international triathlon-championship. We are looking forward to welcome athletes from 20 different European countries who will take part in the competitions in Düsseldorf.

Not only are the exciting and top-class competitions of the elite and age group athletes an important part of the championship, the focus is also on the sport as a connecting tool for integration and peace building. The German Triathlon Federation alone will participate with more than 200 athletes with her 16 state associations. The sensational MedienHafen and the city of Düsseldorf will create together with the 60.000 expected visitors the perfect setting for each athlete, member of their families and supporters. We would like to thank the city of Düsseldorf and the Düsseldorf Congress Sport & Event GmbH for the organization!”

From the Mayor of the city of Düsseldorf, Martin Geisel, “Dear sports friends,

2017  is  going  to  be  an  extraordinary  year  for  sports  in  Düsseldorf  with  lots  of  high class  sports events. The “Top-3” events are the Liebherr World Table Tennis Championships, the ETU Sprint Triathlon European Championships and the Grand Départ of the Tour de France. These three events are going to bring Düsseldorf the “hottest summer” of the decade. The  2,000  elite and  age-group athletes  participating  in  the  ETU  Sprint  Triathlon  European Championships in the MedienHafen Düsseldorf on June 24th and 25th will face ideal conditions.

The MedienHafen is proven event venue of the T³ Triathlon, which has been continuously developed since 2011.  The continental and national federations have been impressed by the positive resonance of the athletes and spectators to the inner-city T³ Triathlon, which will be integrated in the European Championships as an “open race”. For this reason the federations have been convinced that Düsseldorf is the ultimate choice for the host city of the ETU Sprint Triathlon European Championships. I’m very proud about this decision and I’m quite sure that the 60.000 expected visitors of this top-event are pleased as well.

I was very happy to assume patronage of the ETU Sprint Triathlon European Championships. I  would  like to  welcome each  athlete  with  their  supporters,  each sports  official  and  as  well  the fantastic  audience  to the North-Rhine-Westphalian capital city Düsseldorf! Have a great race everyone!” 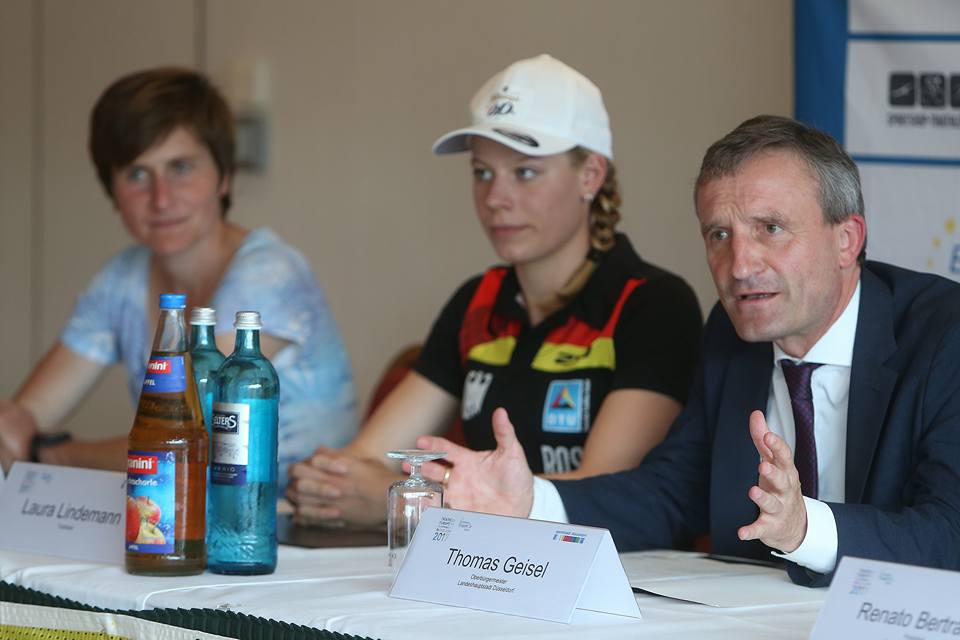 For the women, there is a really impressive line-up and over this shorter distance, the race favourites would be from the Netherlands, Rachel Klamer, Vendula Frintová CZE, Swiss winner of the ITU World Cup in Cagliari, Jolanda Annen, Belgium’s winner of the gold in Rotterdam last year, Claire Michel and perhaps, for the host nation, Laura Lindemann gold medal winner in the U23 in Cozumel.

For the Elite Men, it is a truly stellar line-up of athletes, with Portugal’s João Pereira racing and in with a chance to hold both titles after his superb win in Austria last weekend. He is joined by teammate João Silva but the threat from the Russians is there, with both Polyanskiy brothers racing. Igor did not race the relays and will be more rested than Dmitry who placed 10th in the individual race and whose lightning-quick T2 in the Mixed Team relay, to finish the run in David Hauss-style, wearing no shoes. With Vladimir Turbaevskiy also present, the Russians could make a big impact on this race.

Spain’s Uxío Abuín Ares had a great race to finish 5th and has shown that he is now really back in form. Azerbaijan’s Rostislav Pevtsov finished in the top ten and will surely be one to watch but keep an eye open for the young Brit, Samuel Dickinson. He might have had a DNF in Cagliari but with not just one but two punctures, this was no reflection of his race fitness. He is strong and will be hoping to make amends for Cagliari.

The Netherlands, with Klamer in the women’s race, might be crossing their fingers for two Dutch athletes on the podium, as Jorik van Egdom is racing and with the shorter swim, he may well be in a better position to attack on the bike. All had better watch out, though, because the defending champion, Vincent Luis FRA is racing.

For all the information you might need about the Elite race, check the Athlete Guide – Elite. 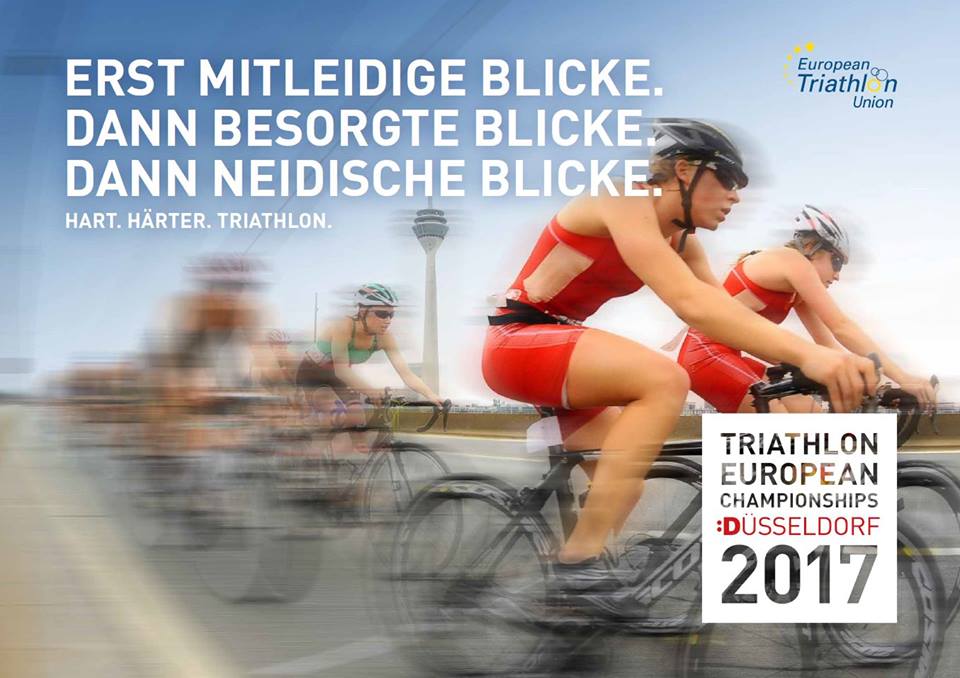 There is also a huge army of Age Group athletes. It has been immensely busy for them with frost Herning (Middle Distance) then Kitzbühel (Standard Distance) and now this weekend, the Sprint Distance.

We hope to draw together all three events to see just which nation is the strongest and to see how many athletes are racing all three distances. With athletes born in 2001 right up to those born in 1935, we have the biggest range of ages and athletes from all over Europe. The atmosphere in this Rheinland city must be truly impressive.

For the Athlete Guide – Age Group please click this link.

The ETU Sprint Triathlon European Championships will be broadcasted live on our Stream. Not only the elite races, but also the age group races will be shown. Please find the live-stream via this link.