Seregni defends her title; Stojanović adds yet another to his collection.

Today we returned to AQUAPARK “WEEKEND” MURESUL in Târgu Mureș, Romania, where the Cross Triathlon swim was also swum on the same swim course.  Age group athletes started the first wave at 09:00am, the Para athletes started at 11:30am and the Elites, Juniors and U23s raced to-gether, men at 13:00 and the women and hour later at 14:00.

All athletes had exactly the same course:


We were hoping for cooler weather after the heatwave we were experiencing at the beginning of this week in Romania, but today was hot! hot! hot!  At least the athletes got to cool down in the wa-ter and started their run wet, which would have been a luxury for the Duathletes who ran in 34 de-grees on Tuesday.

Set in a stunning recreational park and sports complex, all athletes swam in the man-made recreational lake; an out and back swim course which was great for family and friends to watch as they could follow their athlete along the banks or see them from the bridge that passed over them.

The park has pools, play areas, bars and restaurants, and as the day went on the atmosphere got livelier and livelier!  Locals, families, friends, volunteers, fishermen and workers were all cheering on the athletes.

The water temperatures meant the swim was a non-wetsuit race, which is always an advantage for stronger swimmers.

The water exit was near the start line.  On exiting the water, assisted by technical officials and vol-unteers, athletes made their way to transition where they put on their trainers and hats or sunglass-es and set off to run 4 laps of the 5km course.  The run section took the athletes on a mini tour of the park, around the pools and open grassy areas, with crowds cheering on the athletes on every part of the run. 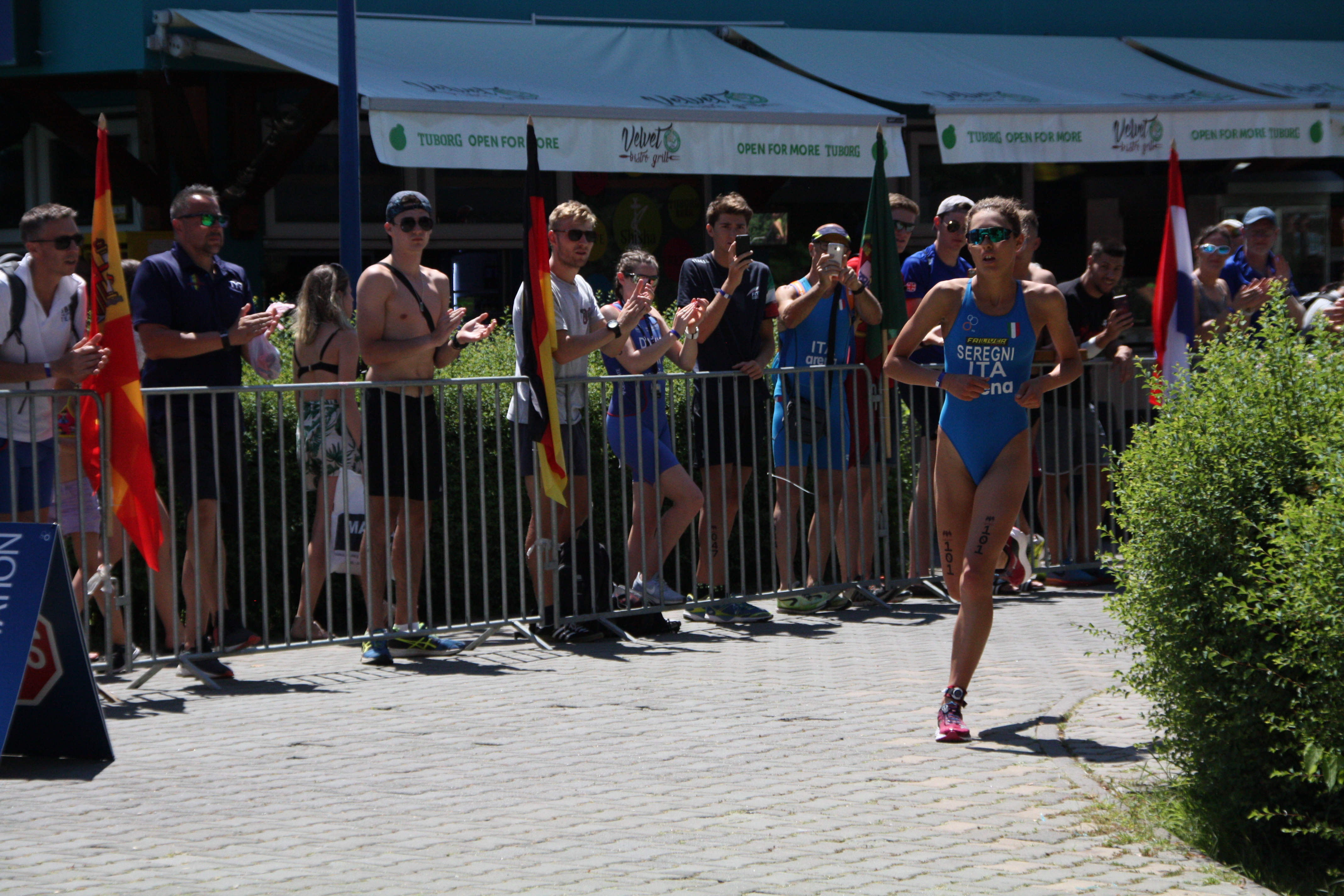 The absolute star of the women’s race, as predicted, was Bianca Seregni (ITA).  Racing as a Junior, she took gold for both the Junior and the Elite categories. Seregni came to the race as Junior World Cham-pion and reigning European Champion.  In Ibiza she also beat all the Elites, claiming both Elite and Junior European Champion titles. 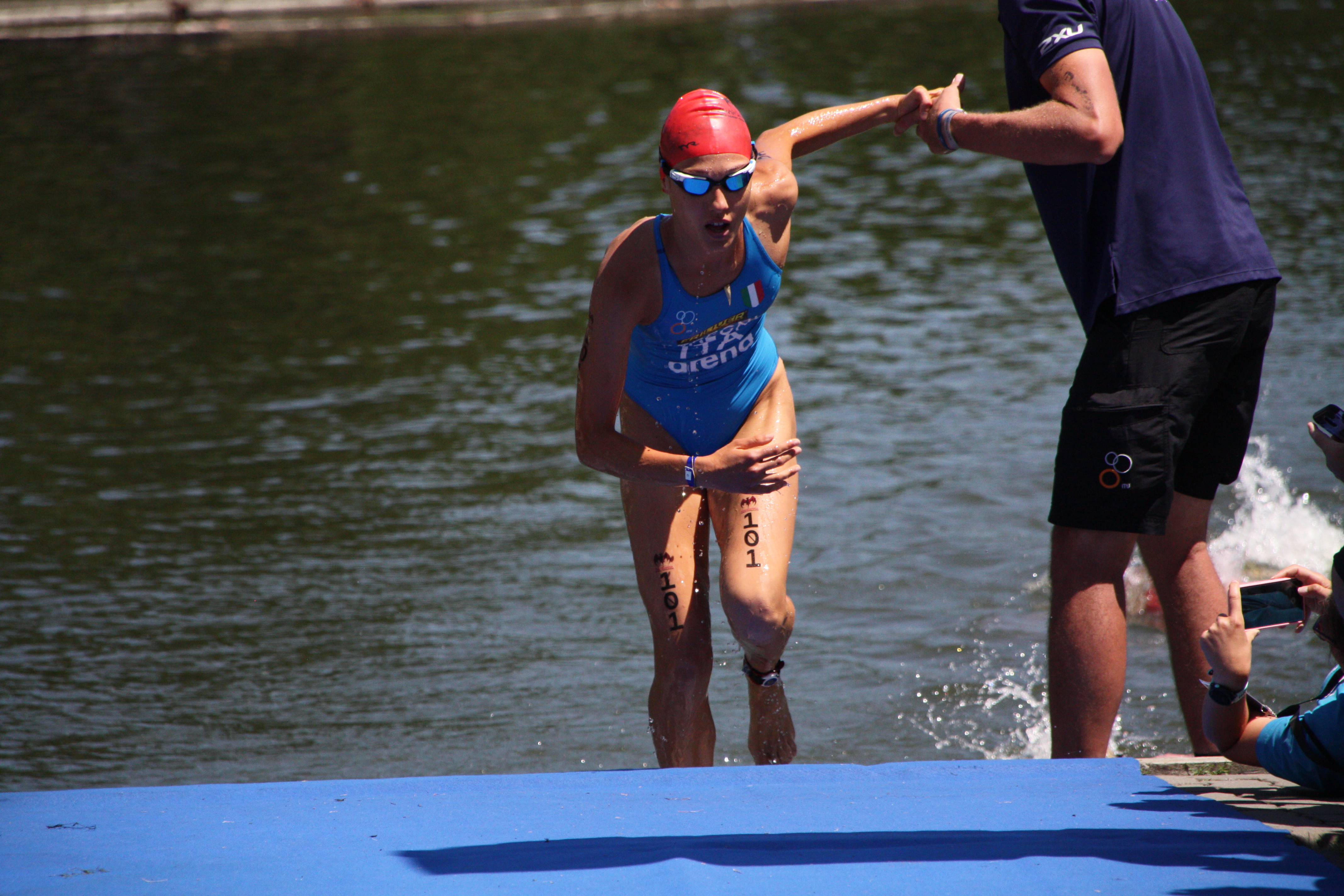 After what she described as a ‘bad’ swim, she came out of the water first in 12.09, in front of Chloe Pollard (GBR Elite), who, after such a fantastic swim, unfortunately did not finish the race.

When asked after the race about whether or not she expected to win the Elite category as well as the Junior, Seregni said:

¨In Ibiza last year I competed for the Elite podium and I was first, so today in Târgu Mureș I wanted to compete also for the Elite podium, and I did, finally. It was a very hard race, the swim was not so good but I came out of the water first and so I’m happy, the run was hard but finally I did it and I tried to run fast until the end.  I’m happy. 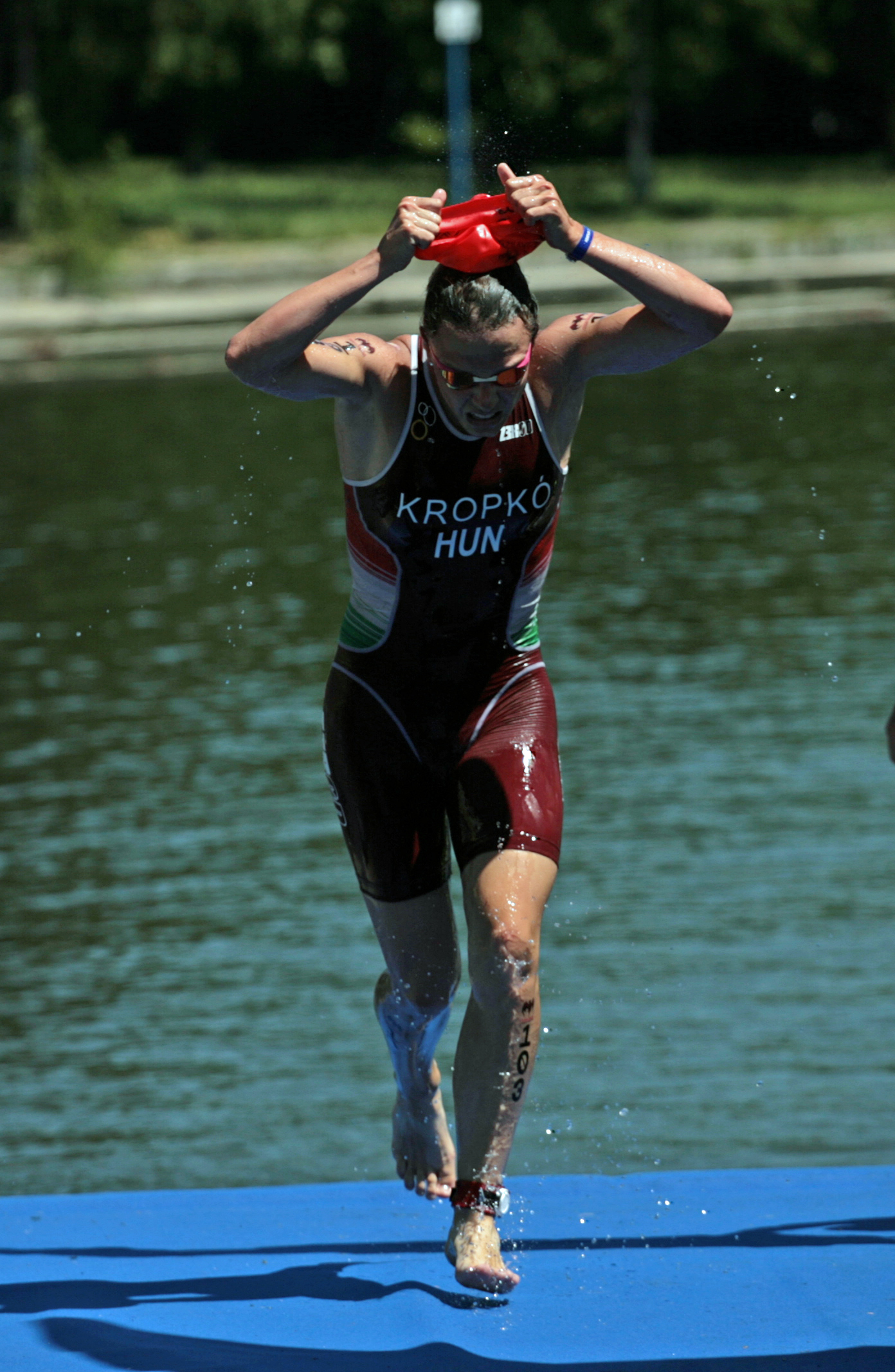 Next out the water, also competing as a Junior, was Márta Kropkó (HUN) and Hannah Kitchen (GBR Elite).  Kitchen was not at her best on the run today due to an ongoing foot issue but still managed to cross the line in 5th place.  Kropkó continued racing well, and crossed the line in 3rd place to take home bronze for the Elite category and silver for the Junior.

Seregni did not have the fastest runtime, but with the lead she had she did no need to push.  She crossed the line with an amazing finishing time of 31.12.

Second across the line, taking silver, was another favourite, local athlete Antoanela Manac (ROU).  Manac had the fastest runtime, completing the 4 laps and 5 kms in a very respectable 17.52, but with a slower swim time than the Juniors she could not take home gold today.  This will be her 5th podium since becoming an Elite this year.

3rd Junior (8th overall) was Dominika Peszleg (HUN), who had the fastest run time of all the Juniors and 2nd fastest overall. 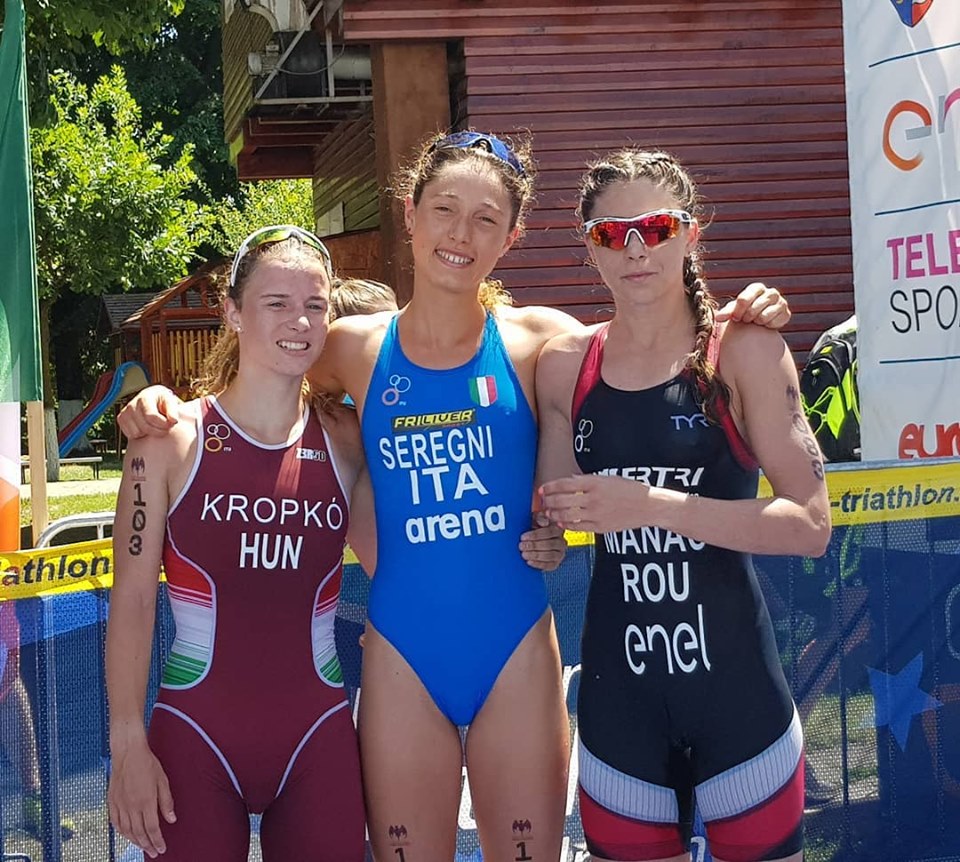 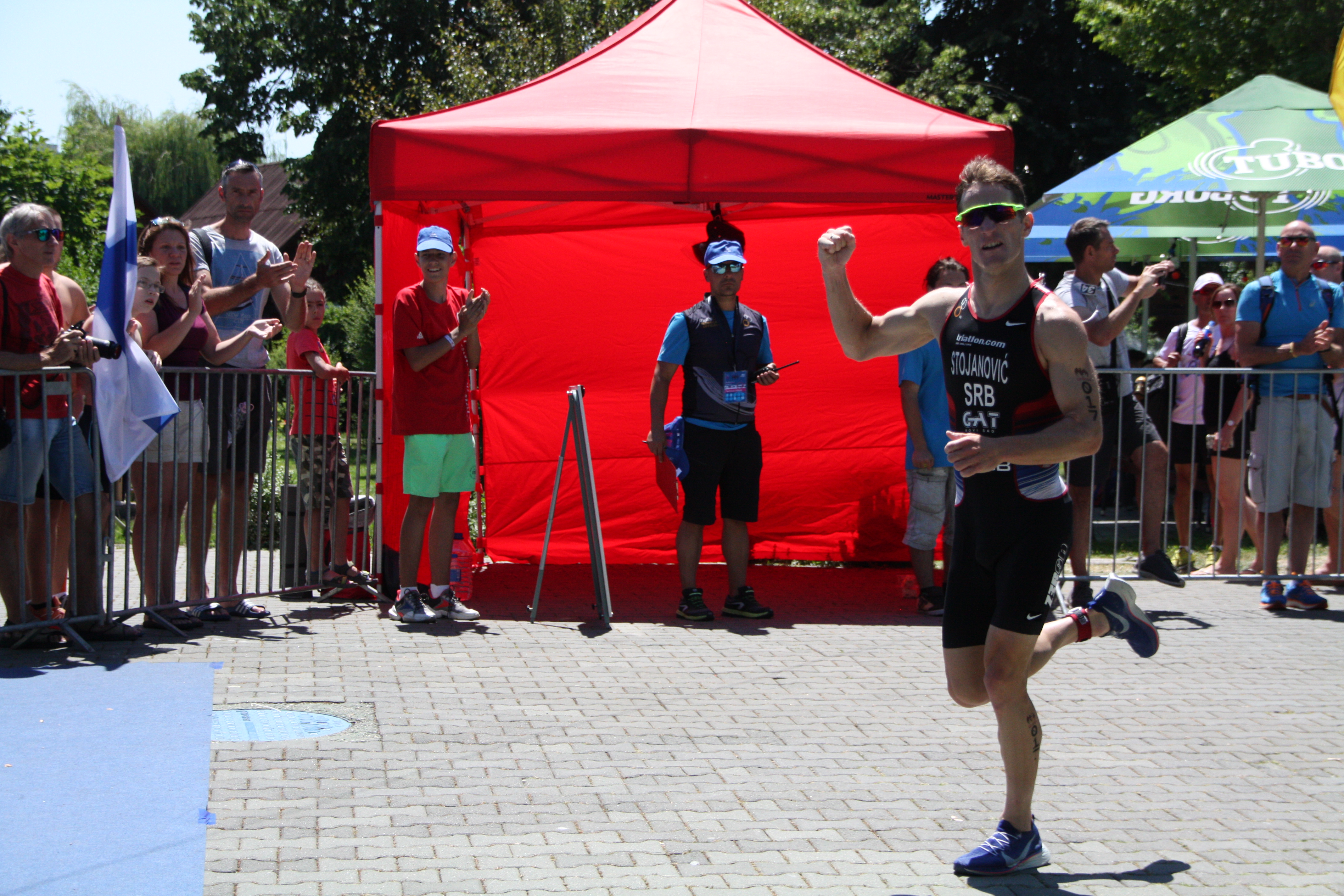 The absolute winner of the Elite, U23 and Junior race was Ognjen Stojanović (SRB).  We got a few words from him after the race:

¨The race in Târgu Mureș was pretty intense - the swim was in the narrow canal so good positioning at the start was crucial. I started well but after 600m there was a gap as the athlete in front of me lost the connection so I needed to overtake him and to almost sprint to close the gap from the leaders (not counting über-swimmer from Slovenia at the front) which I managed so that was pretty big effort. 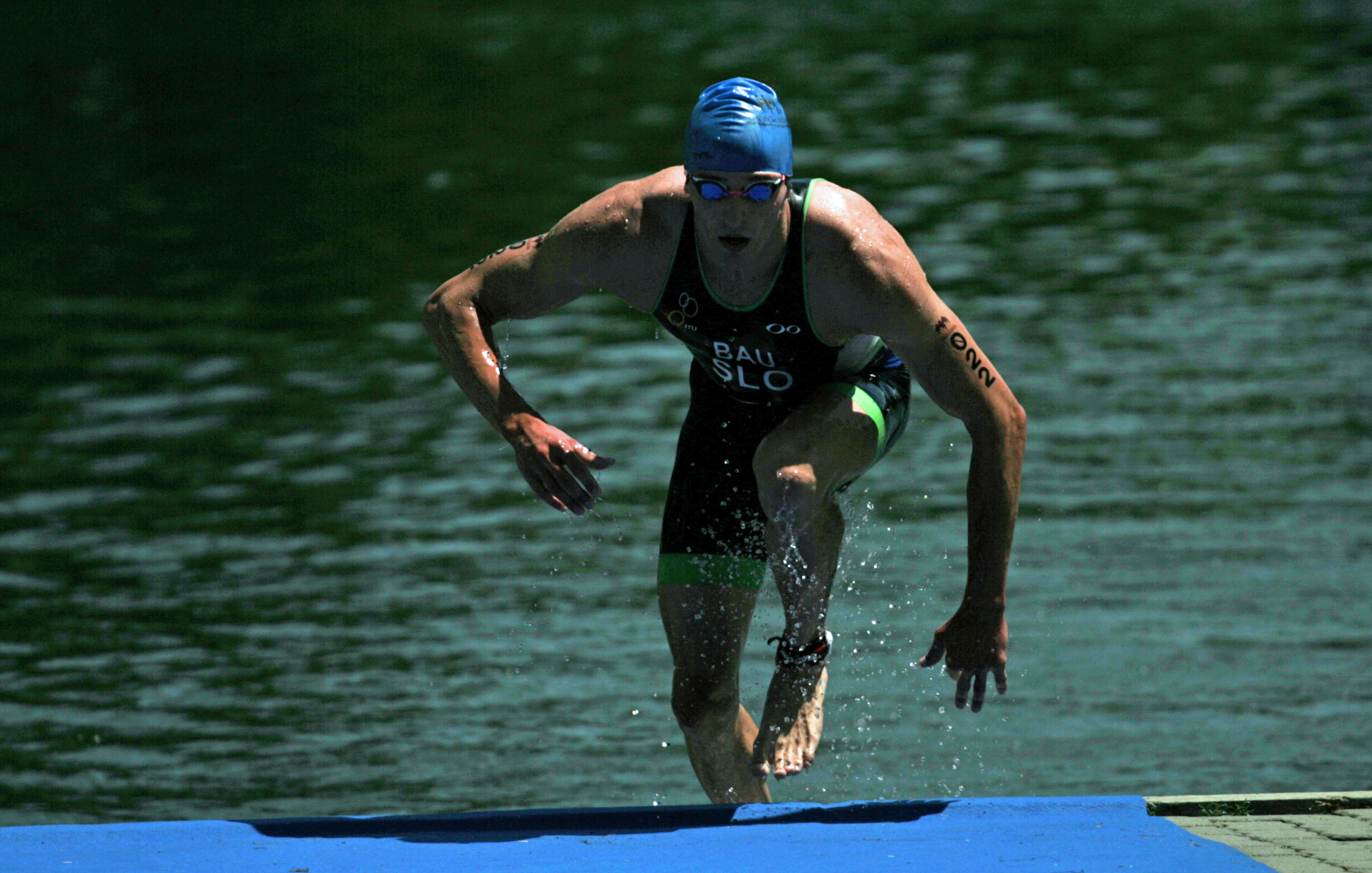 The run is pretty technical and “punchy” with a lot of turns and eight 180 degree turns so a lot of power and tempo changes were required. I felt fine from the beginning and I think I ran smart as I didn’t start the first lap going all out. I was in 4/5th position then after 2-3km I managed to bridge the gap to the two leaders - Bryukhankov and Secchiero and I ran with them for a lap and a half and I still felt good so decided to wait for the last 180 degree turn, 300 meters before the finish, to accelerate.

I kicked hard and went all or nothing and this time I was lucky to get away and to get my first win and podium at European Aquathlon Championships.¨

Stojanović was the predicted favourite, having had two great triathlon races in the last 2 months, taking gold in both the 2019 Cholpon-Ata ASTC Sprint Triathlon Asian Cup and Central Asian Championships and the 2019 Shymkent ASTC Triathlon Asian Cup.  He ran 5 kms today in a fan-tastic 15.06.

Andrea Secchiero (ITA) was like-ly to podium - and he did just that - taking the silver medal today.  He came 5th at the 2019 Ponte-vedra ITU Aquathlon World Championships. 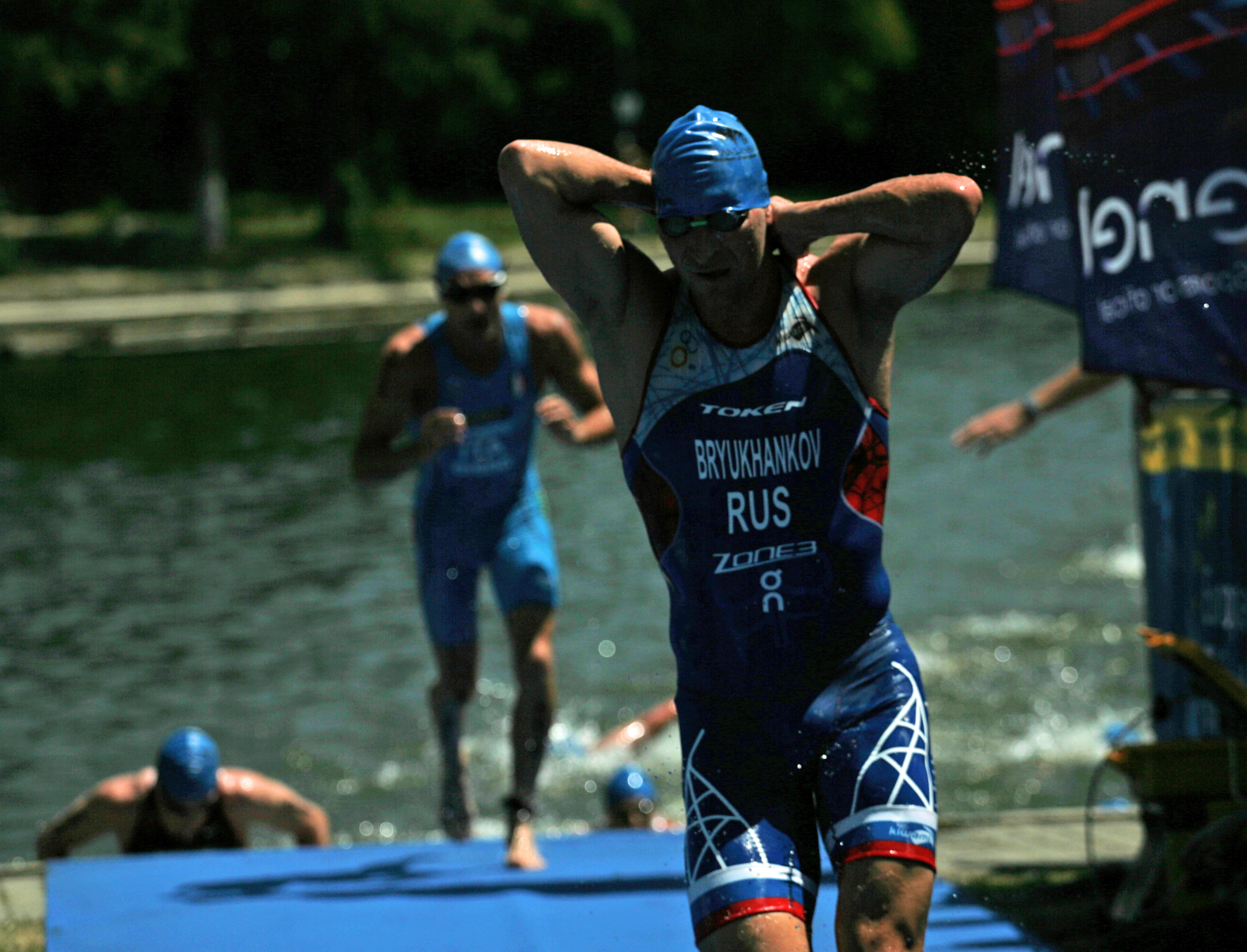 Alexander Bryukhankov (RUS) was also named as one to watch out for, as he has had some good results in triathlon. He took silver in the 2019 Melilla ETU Sprint Triathlon European Cup and the 2019 Sharm El Sheikh ATU Sprint Triathlon African Cup and Pan Arab Championships earlier this year.  Today he took the bronze. 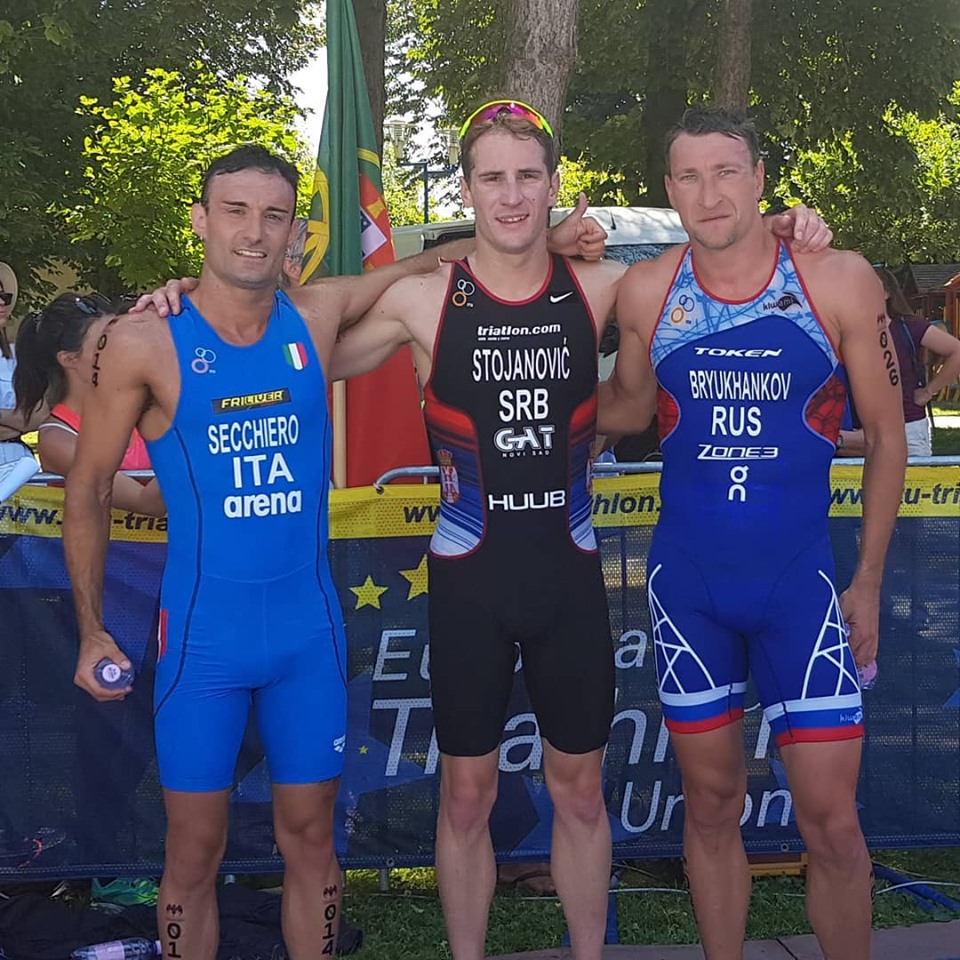 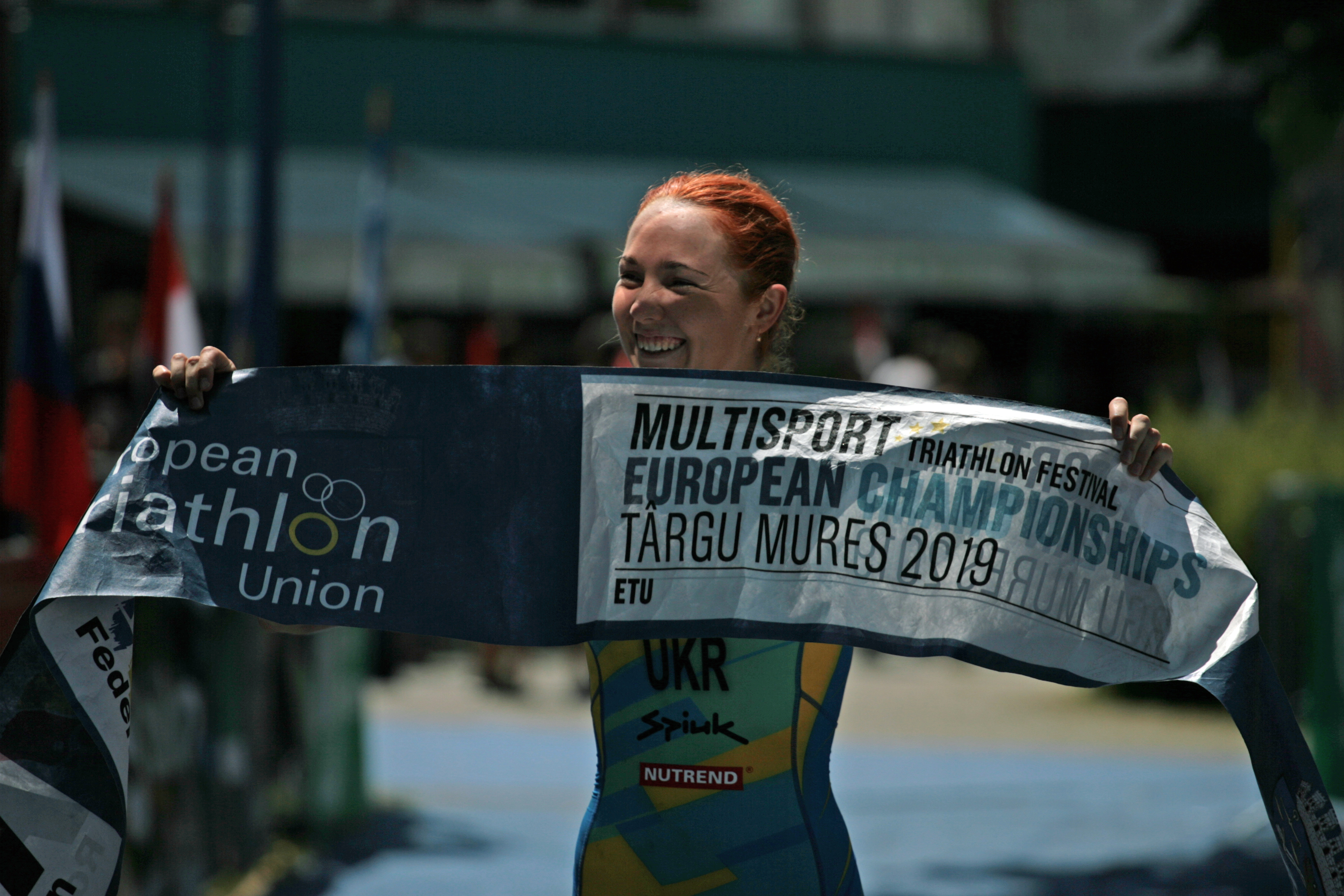 Chloe Pollard (GBR), despite an amazing swim leaving the water in second place, did not finish the race.

The U23 Men had some great run times today, many of them being faster than most Elites. 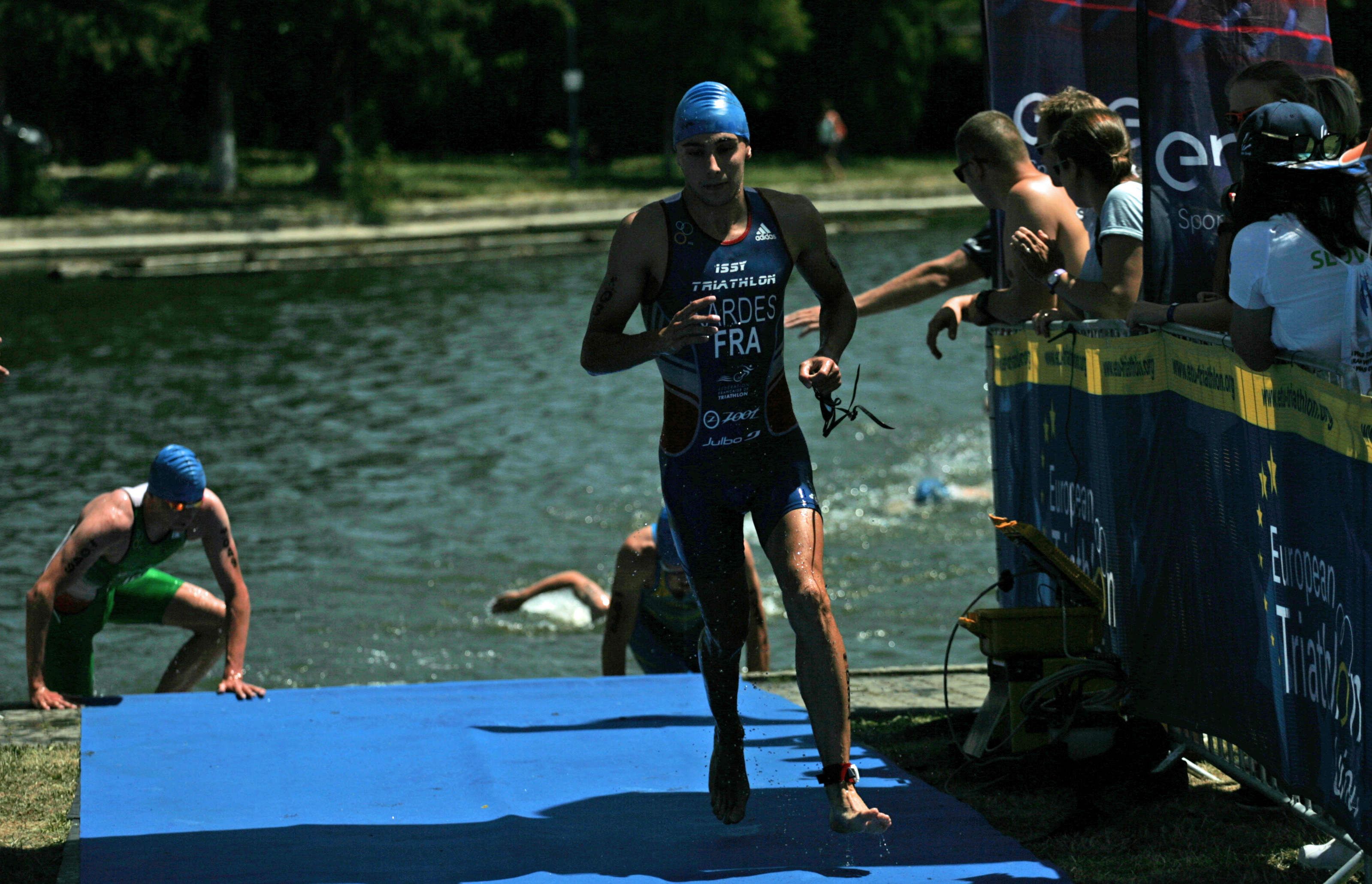 With a run time of 15.24 Alexis Kardes (FRA) won the U23 category.  He took silver in Fyn last year at the Aquathlon World Champs and 3rd overall.  Today he just missed the Elite podium, coming 4th in that category.

Silver went to Mikita Katsianeu (BLR), 5th overall, who had one of the fastest runtimes of the day, a phenomenal 15.13.

Olaf Jan Bosscher (NED) came 6th in the 2019 at the Pontevedra ITU Aquathlon World Championships so he was also a competitor for the podium.  Today he was runner-up and took away the silver medal. 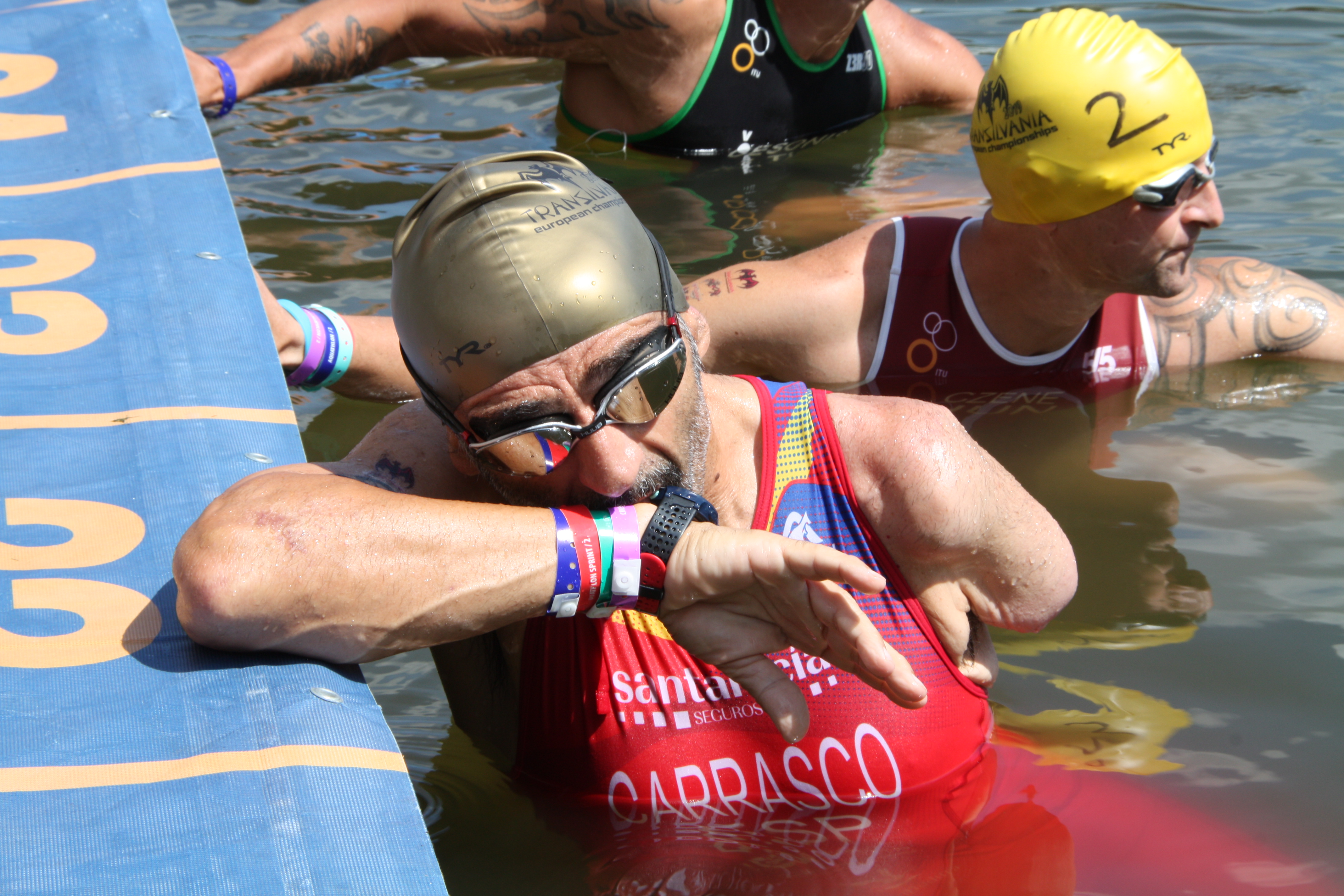 The Para wave, as always, was totally inspiring. 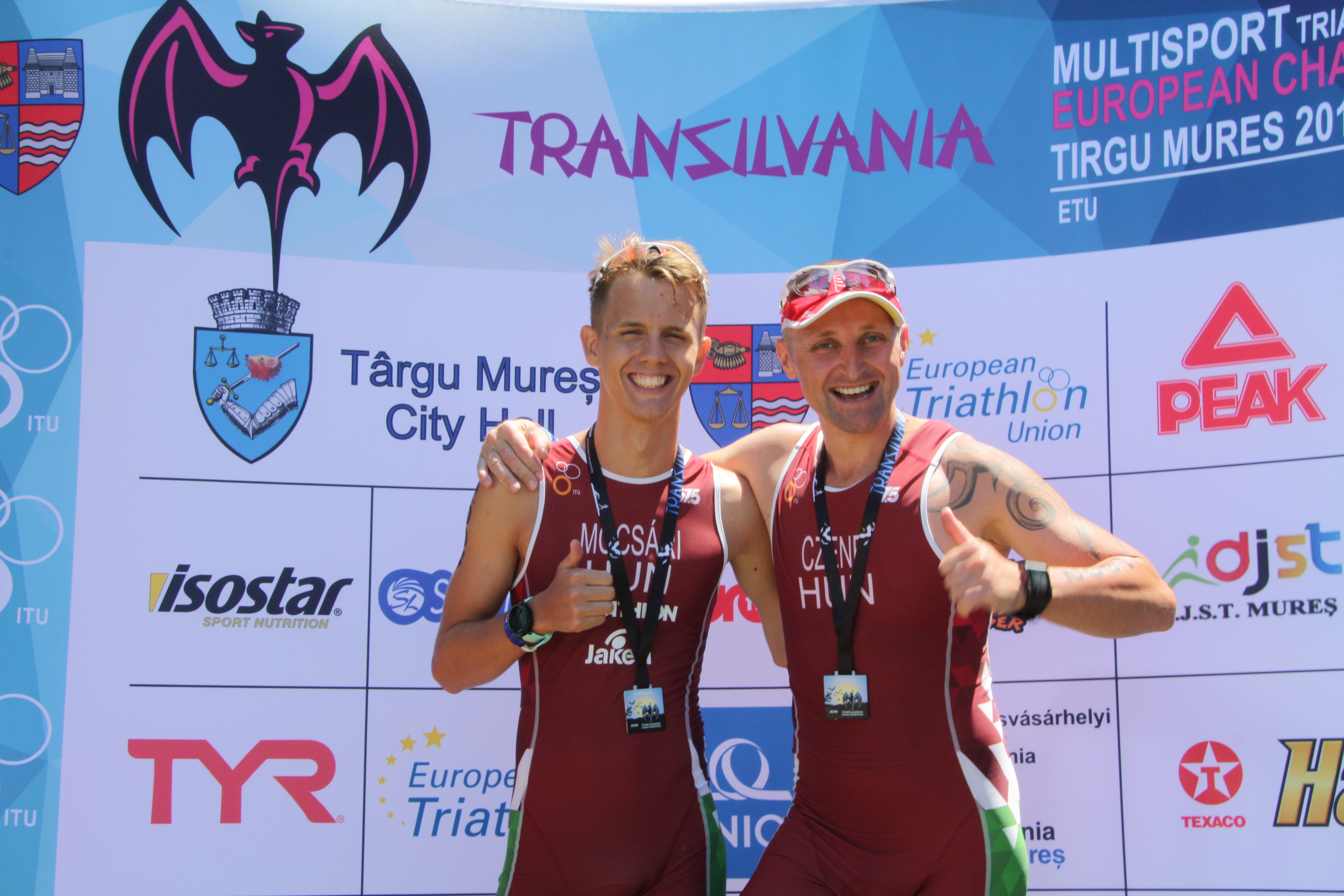 First out of the water was Hungarian PTS5 Bence Mocsari, who went on to be the first of the Para athletes over the finish line. 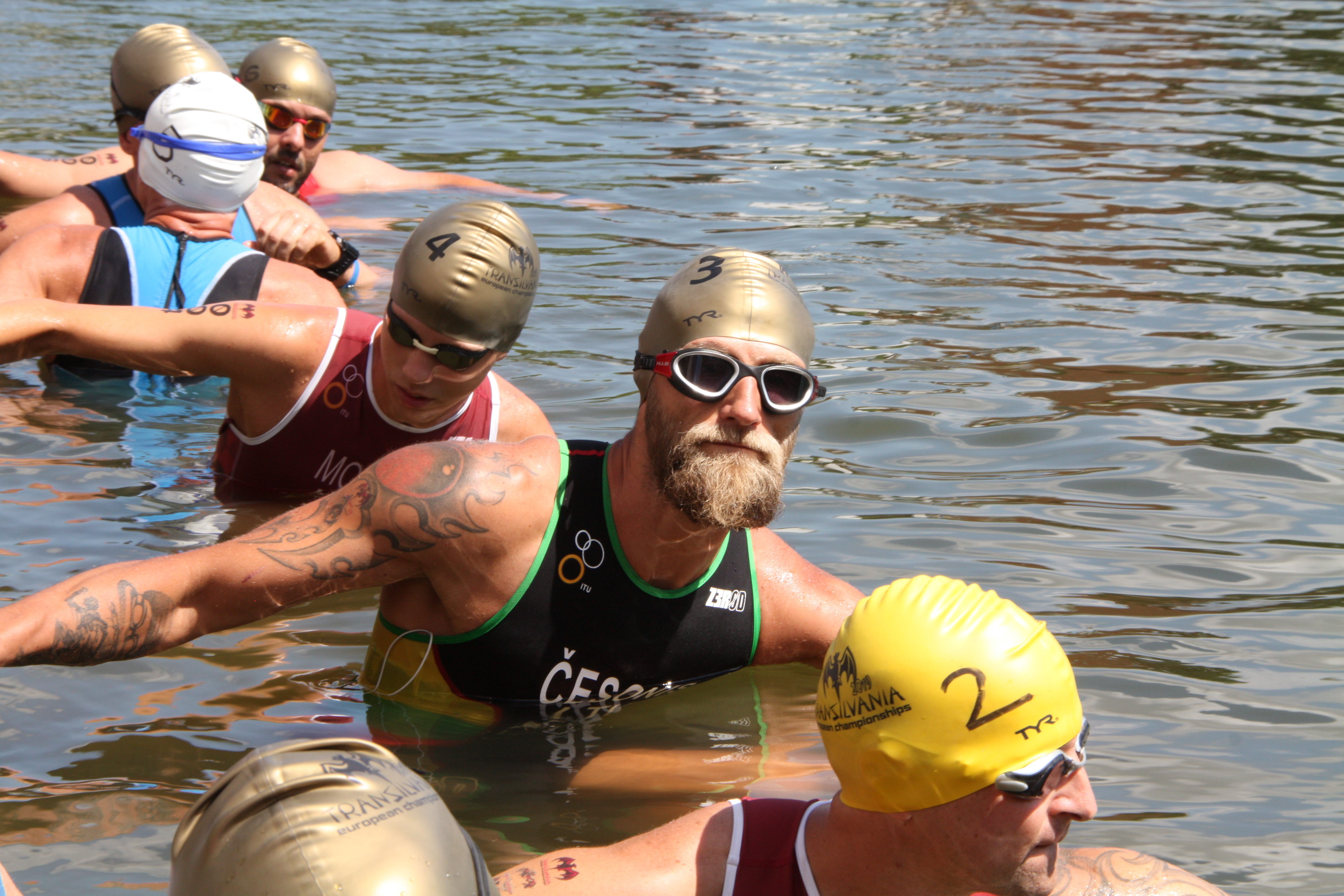 Next athlete, from the same category, was Ernestas Cesonis (LTU) who took the silver medal.

Romanian athlete Daniel Nisoroiu, PTS2, had a great swim and was next out of the water, he takes home a gold medal today. 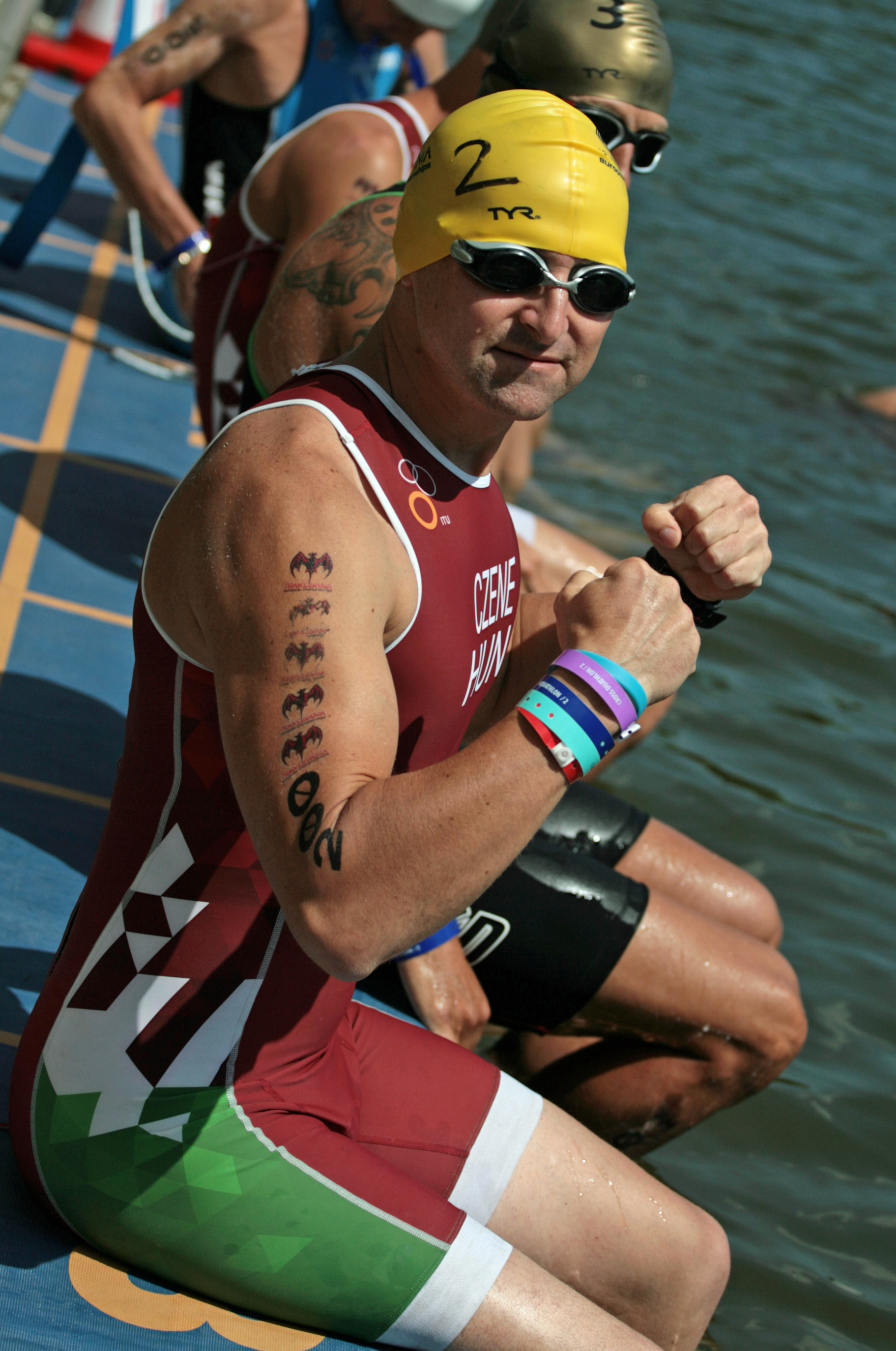 After that, Gábor Czene (HUN), who has raced every race so far this week. He takes home yet another gold medal. 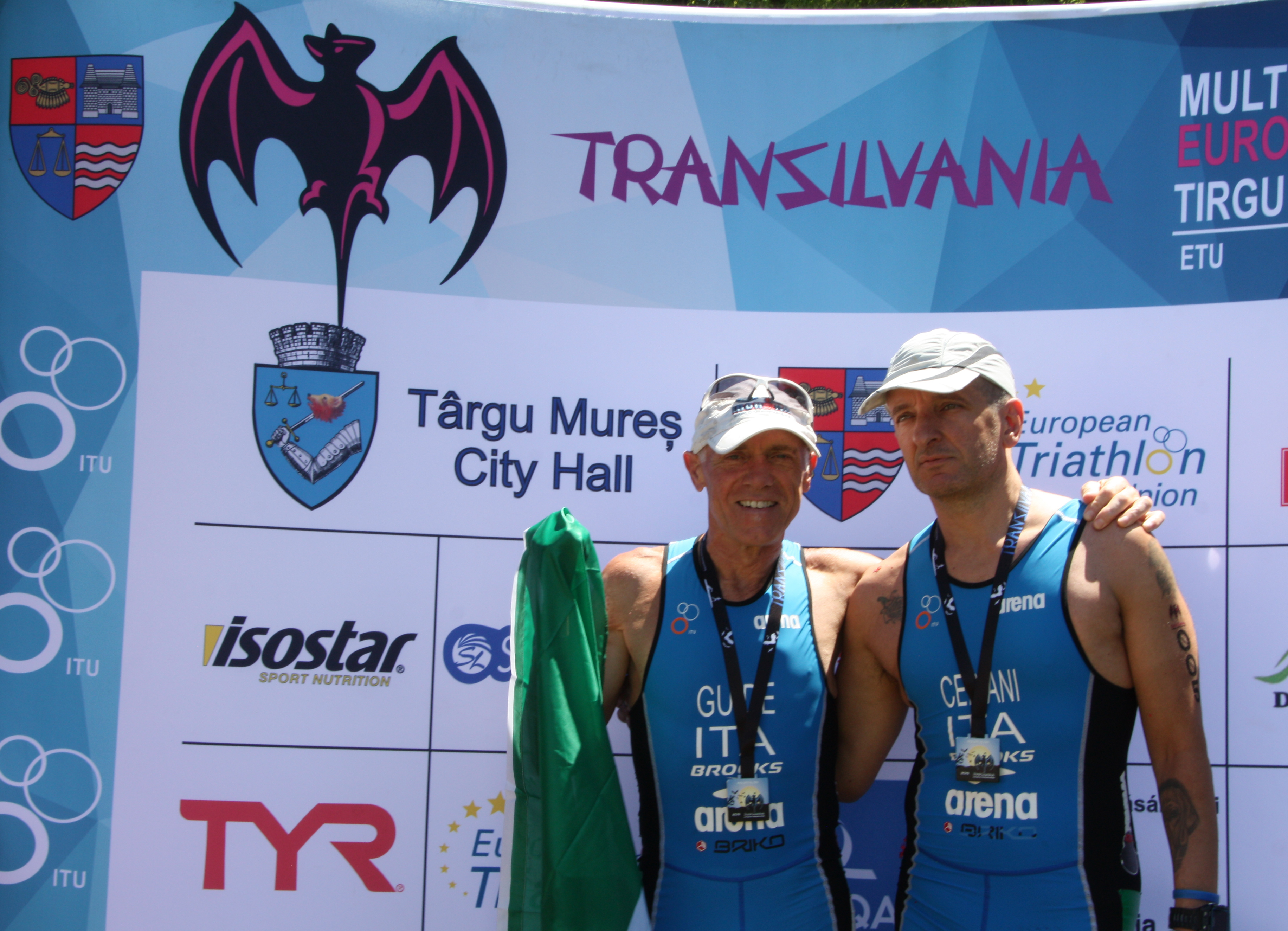 Italian athlete Alberto Ceriani in the PTVI (B1) category and his guide were next and also take gold. 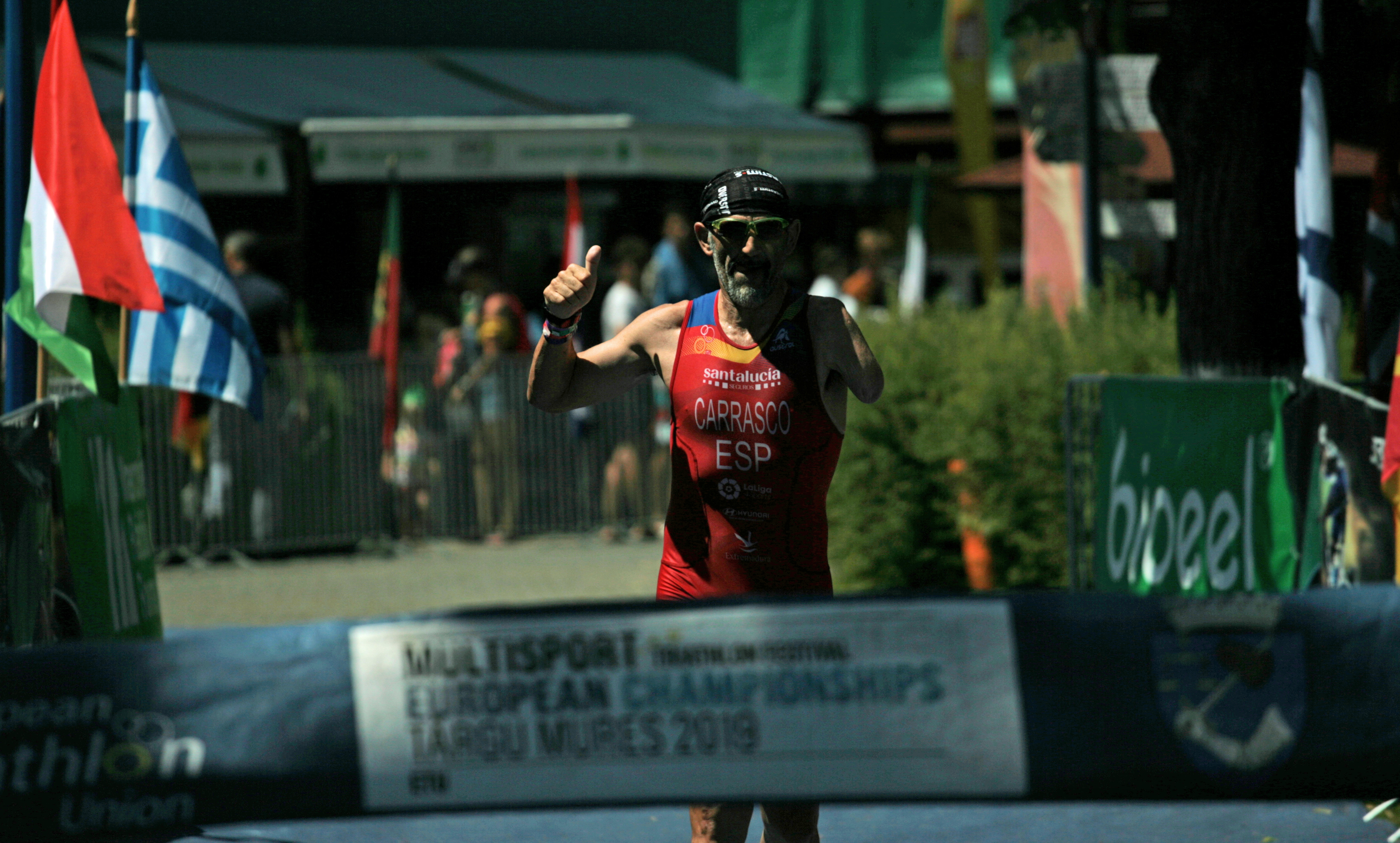 Last but by no means least, the Spanish hero, Joaquin Carrasco exited the water.  With only one arm to swim with, he puts many to shame with his fantastic swim time of 27.13 and takes another gold home today.

For all races, for the most current information, please follow the event page.