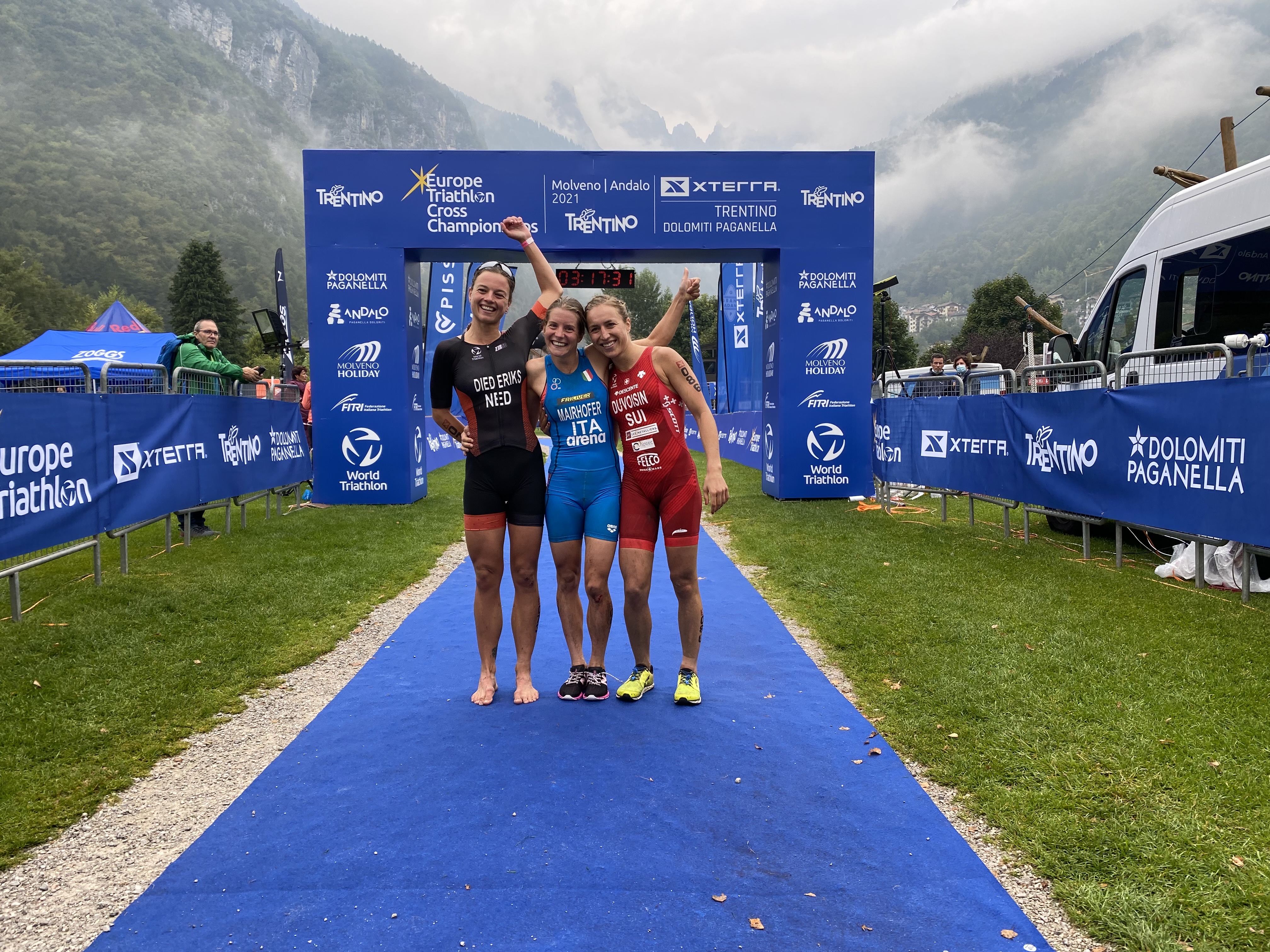 A day to remember at Dolomiti Paganella XTERRA  European Cross Championships in Italy because of the incredible feelings coming from such a hard event from all the participants. 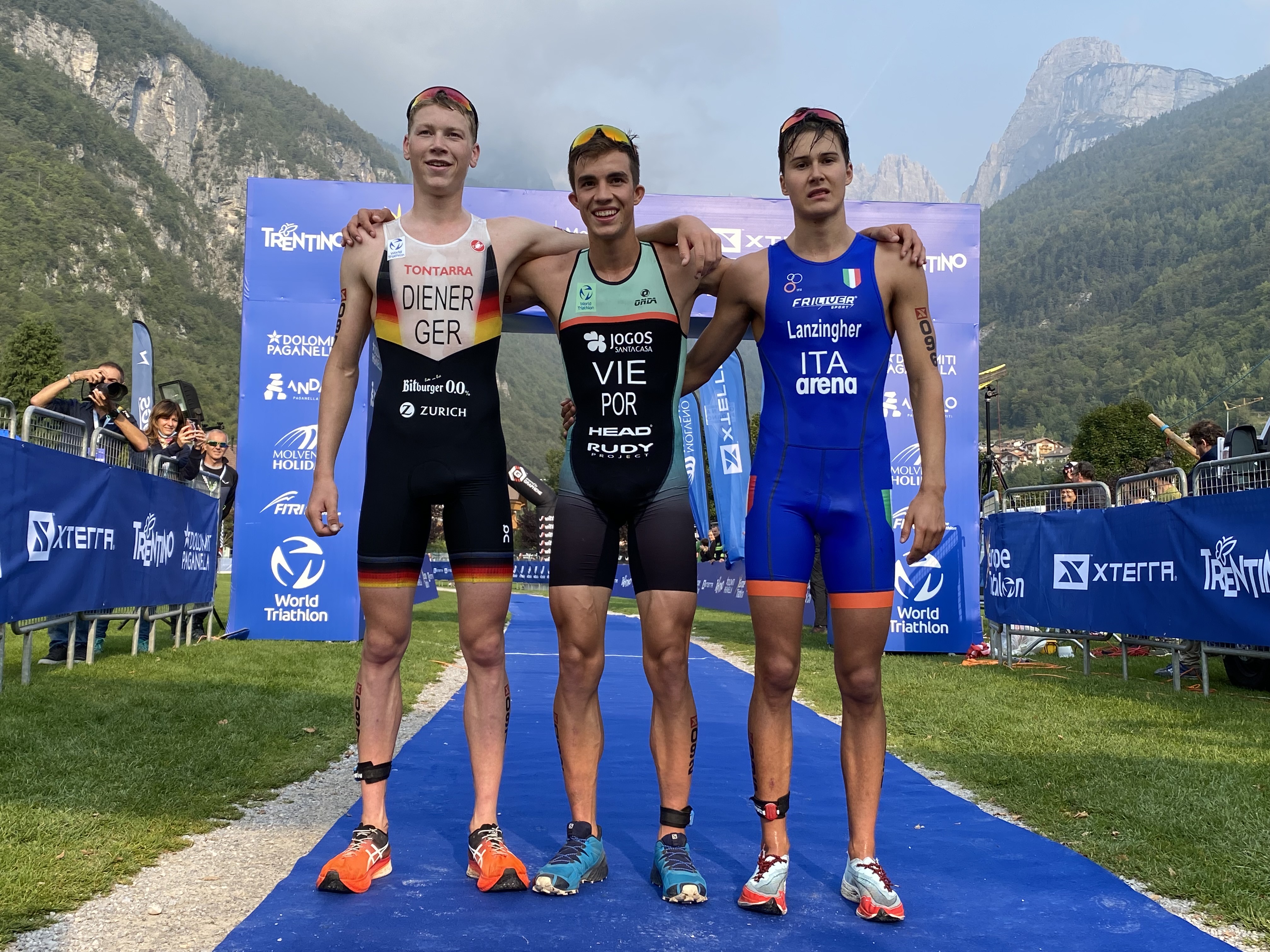 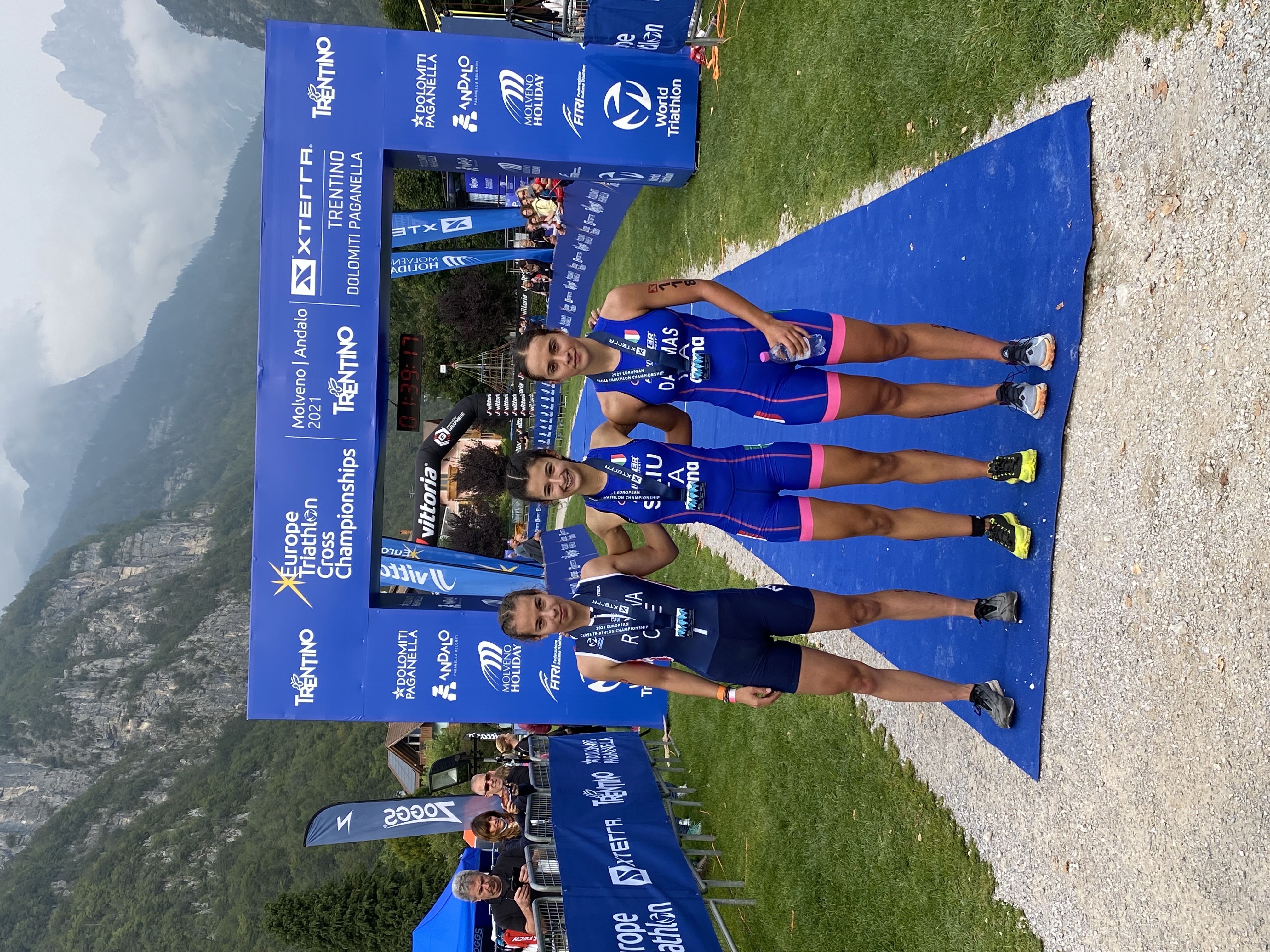 The weather fortunately was quite benevolent with the athletes since heavy expected rain wasn’t at the end not so and after some rain showers it stayed cloudy but stable. This permitted not to create to many problems on the technical bike course to all. 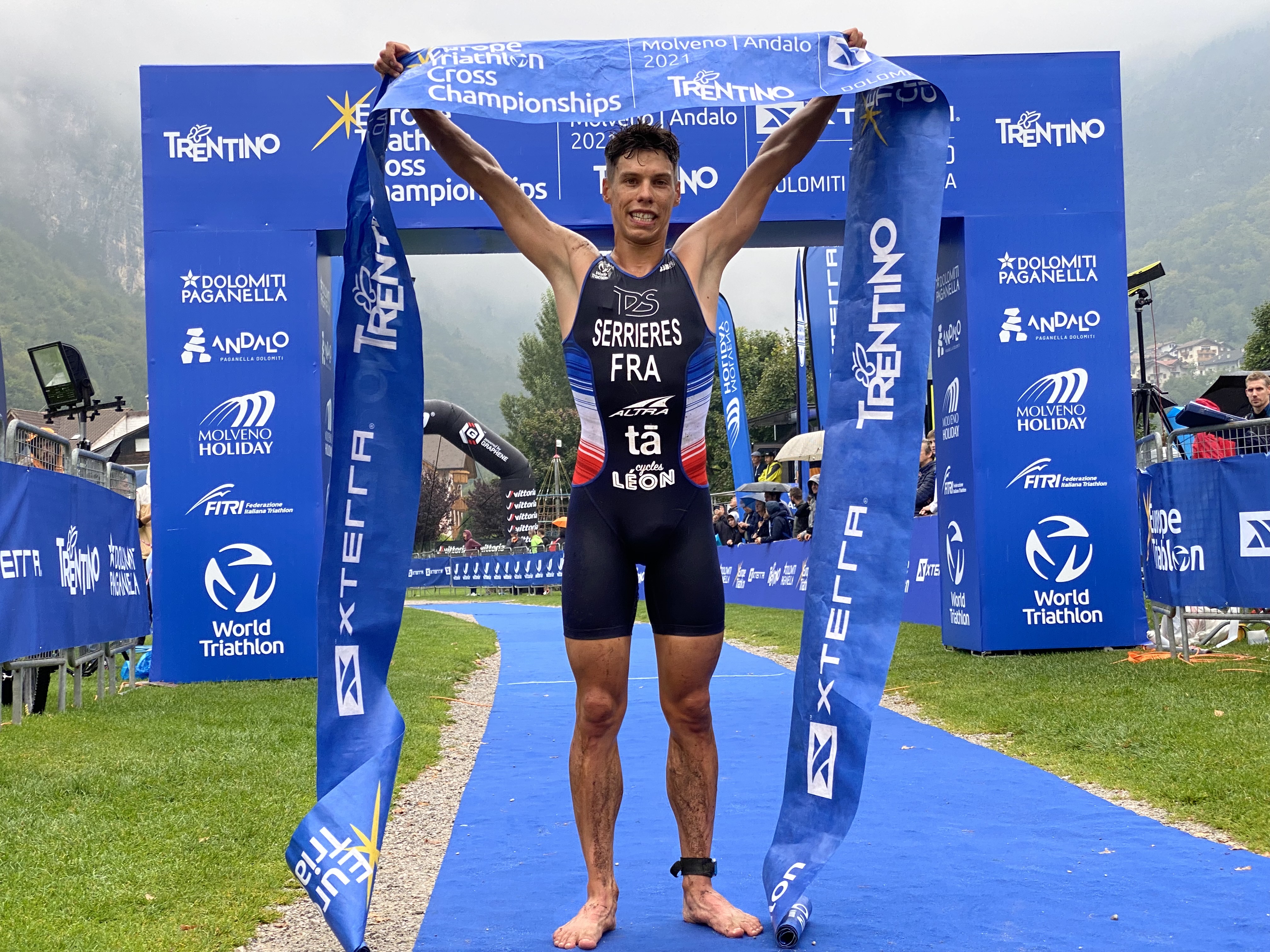 What a fantastic result from the Élite Men. The French athletes took all the podium with Arthur Serrieres, Félix Forissier and Maxim Chane, and Lukas Kocar (CZE) who was leading the race with a stunning bike had to bow to the amazing running performance of all the French Team. 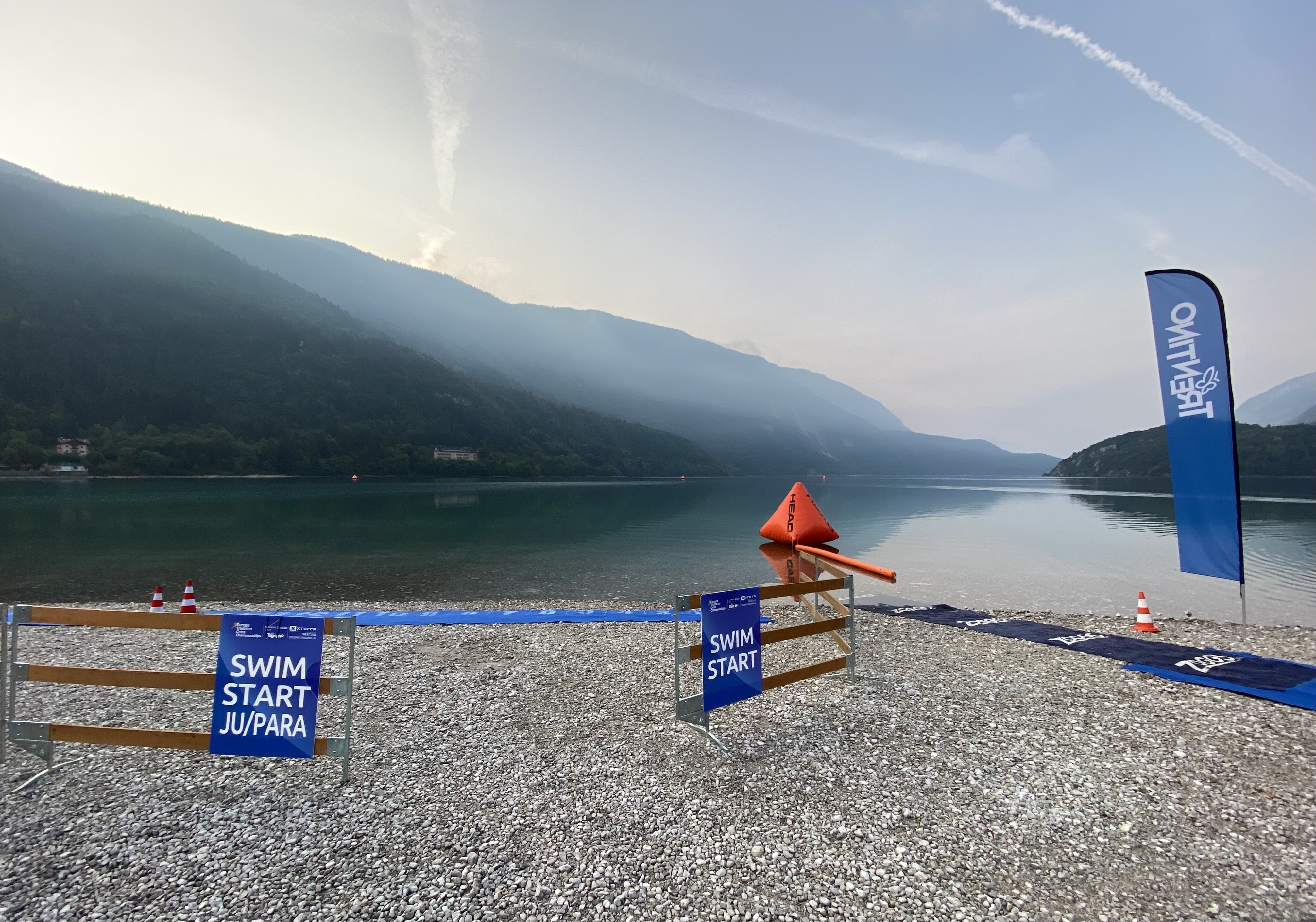 In the swim the first to exit Hugo Jan Bosscher (NED) Michele Bonacina (ITA), Lukas Kocar (CZE) and Karel Dusek (CZE). The Czech Kocar took immediately the lead of the race trying to push as hard as he could knowing the stunning French running skills. However from behind French Forissier was going fast and furious and didn’t want to give any possibilities to the other athletes. The Spanish Ruzafa was also in the chasing small group. At the end of lap one Maxim Chane was already ahead of Lukas Kocar 8 seconds and in third still Felix Forissier followed by Bonacina and Ruzafa. At lap 2 the French started to take the lead with Chane then Forissier and Serrieres and in forth Ruzafa who for a flat tyre had to finish his bike with great difficulty. In T2 the first to leave was Chane and on his shoulders Forissier who almost immediately took the lead. However behind Serrieres was catching up with such an impressive pace and the other French could only manage to maintain their positions. Arthur Serrieres crossed the finish and is crowned European XTERRA Cross Champion in 2:22:52. Silver medal Félix Forissier and bronze for Maxim Chane. 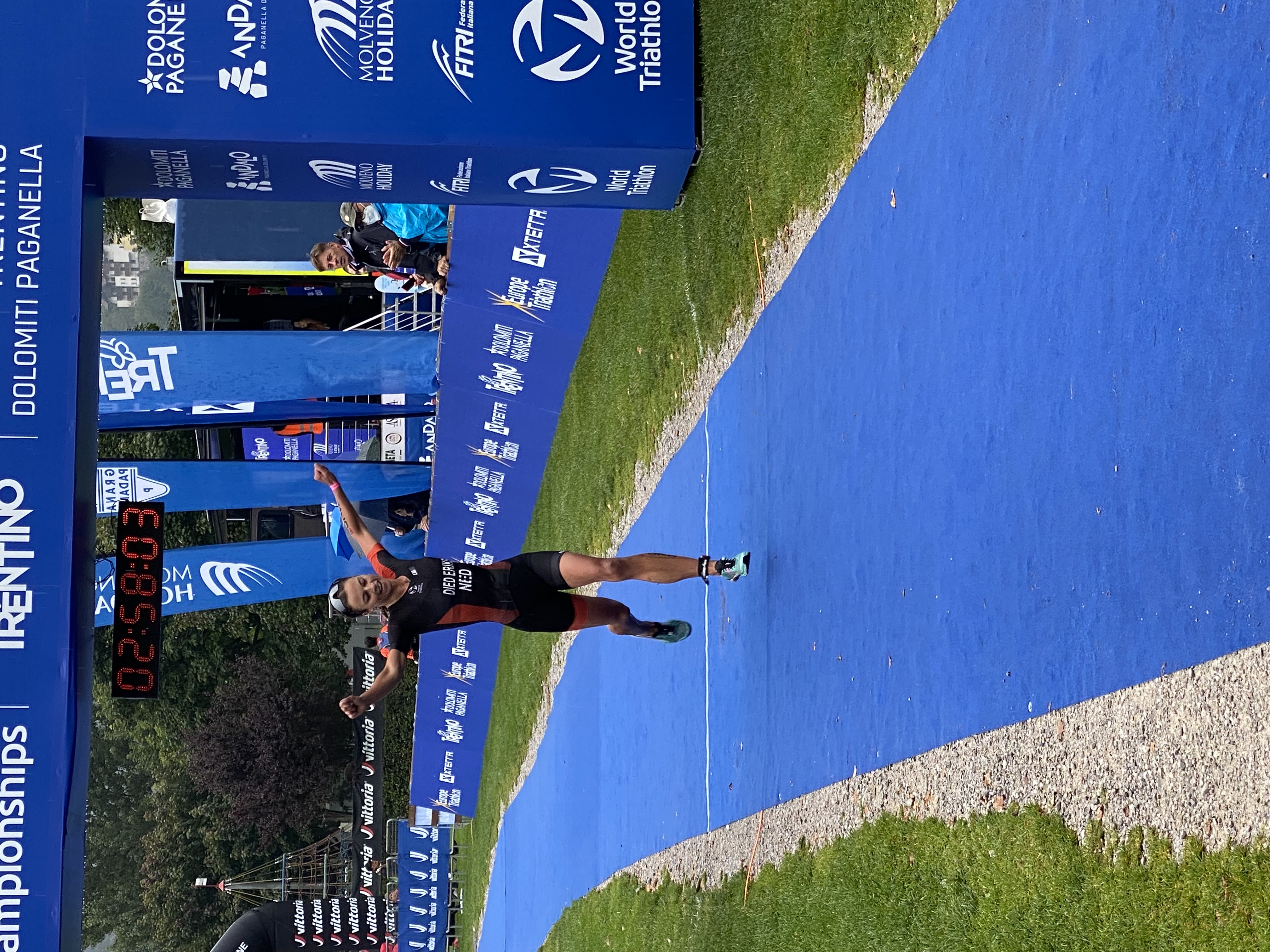 In the Élite Women Aneta Grabmullerova (CZE) is the fastest swimmer, followed by Sofiya Pryyma (UKR), Lydia Drahovska (SVK), Sandra Mairhofer (ITA),  Loanne Duvoisin (SUI) and Aneta Castro (ESP). After bike lap one Sandra Mairhofer was leading two minutes ahead of Loanne Duvoisin, Isabelle Klein (LUX), Alizee Paties (FRA) and Eleonora Peroncini (ITA). In T2 Mairhofer was furious and did an excellent solo run leaving 4 minutes Michelle Flipo from Mexico behind who could not participate to the European Championship so silver went to Diede Diederiks from the Netherlands and bronze to Swiss Loanne Duvoisin. The Italian incredibly strong Sandra Mairhofer is European XTERRA Cross Champion in 2:49:00. 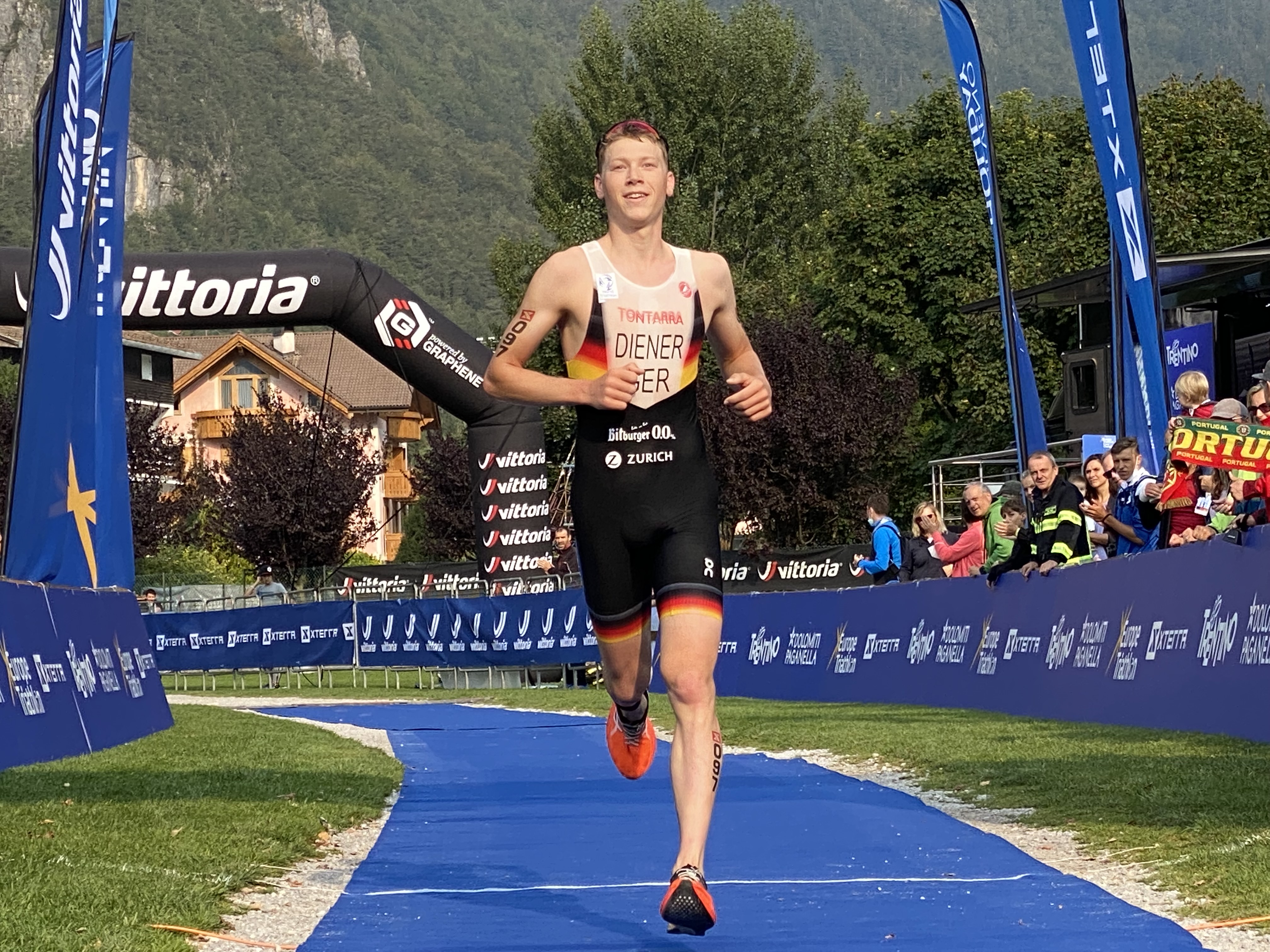 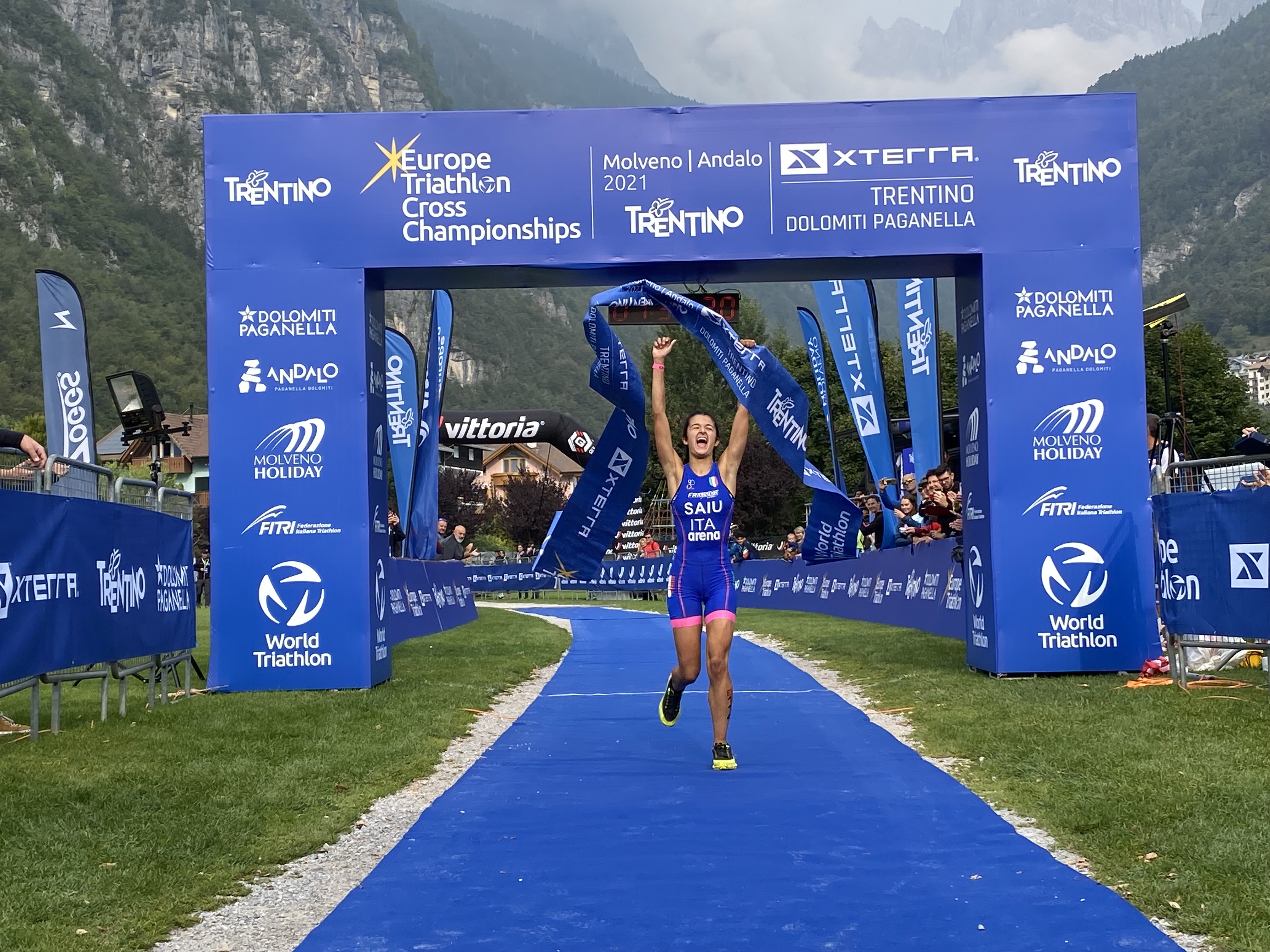 In the Juniors after the Cross European Title the Portuguese François Vie is also European Triathlon gold medal. He imposed himself on the German Jan Diener and the Italian Lukas Lanzingher in a superb solo race finishing in 1:15:16.
In the Junior Women the young Italian Giulia Saiu, at her first international event, manages to grab such an impressive Junior European Title in 1:34:18 more than 3 minutes ahead of the Czech Vendula Rysava and in bronze the other Italian Matilde Dal Mas completed the podium. 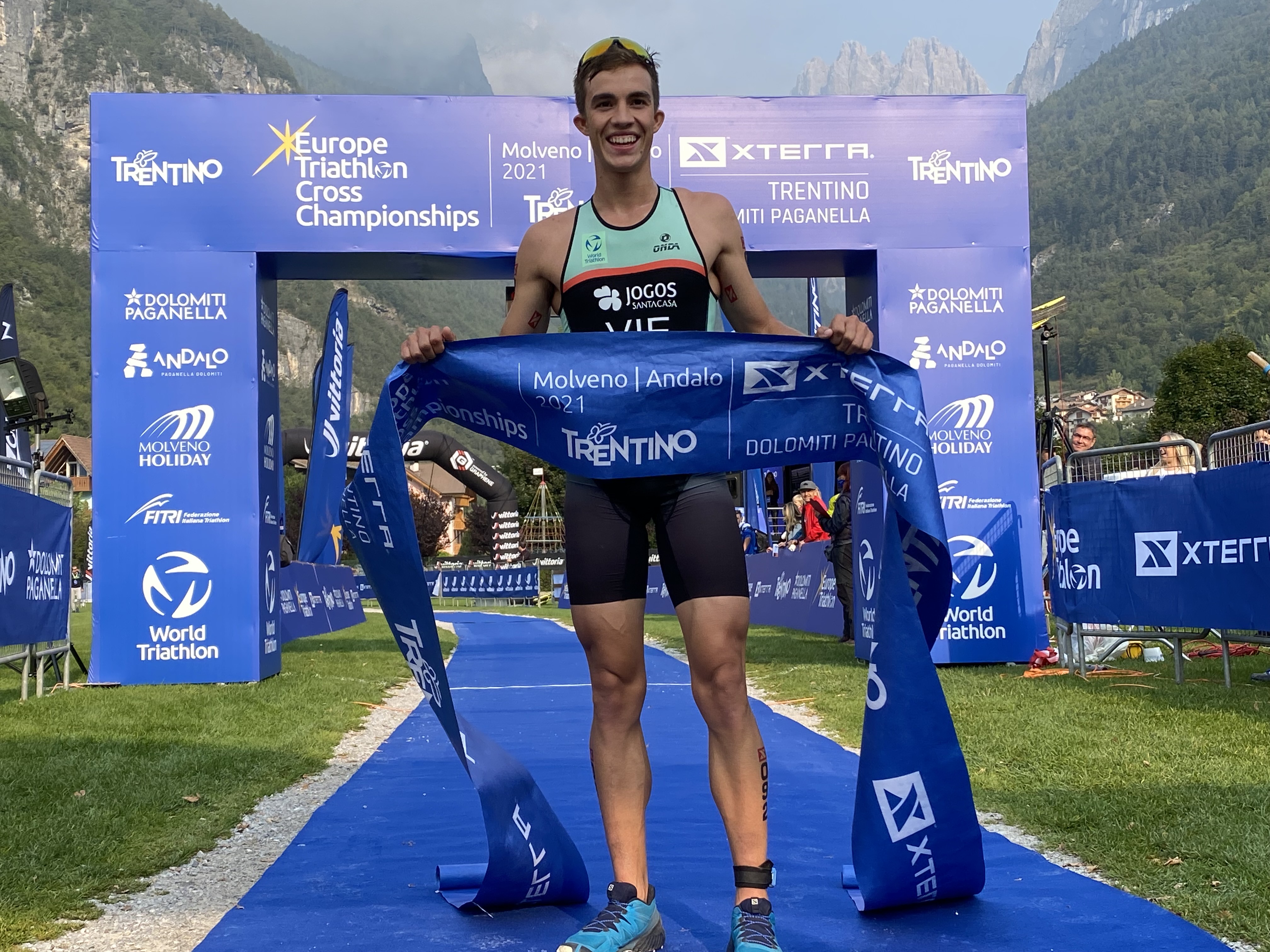 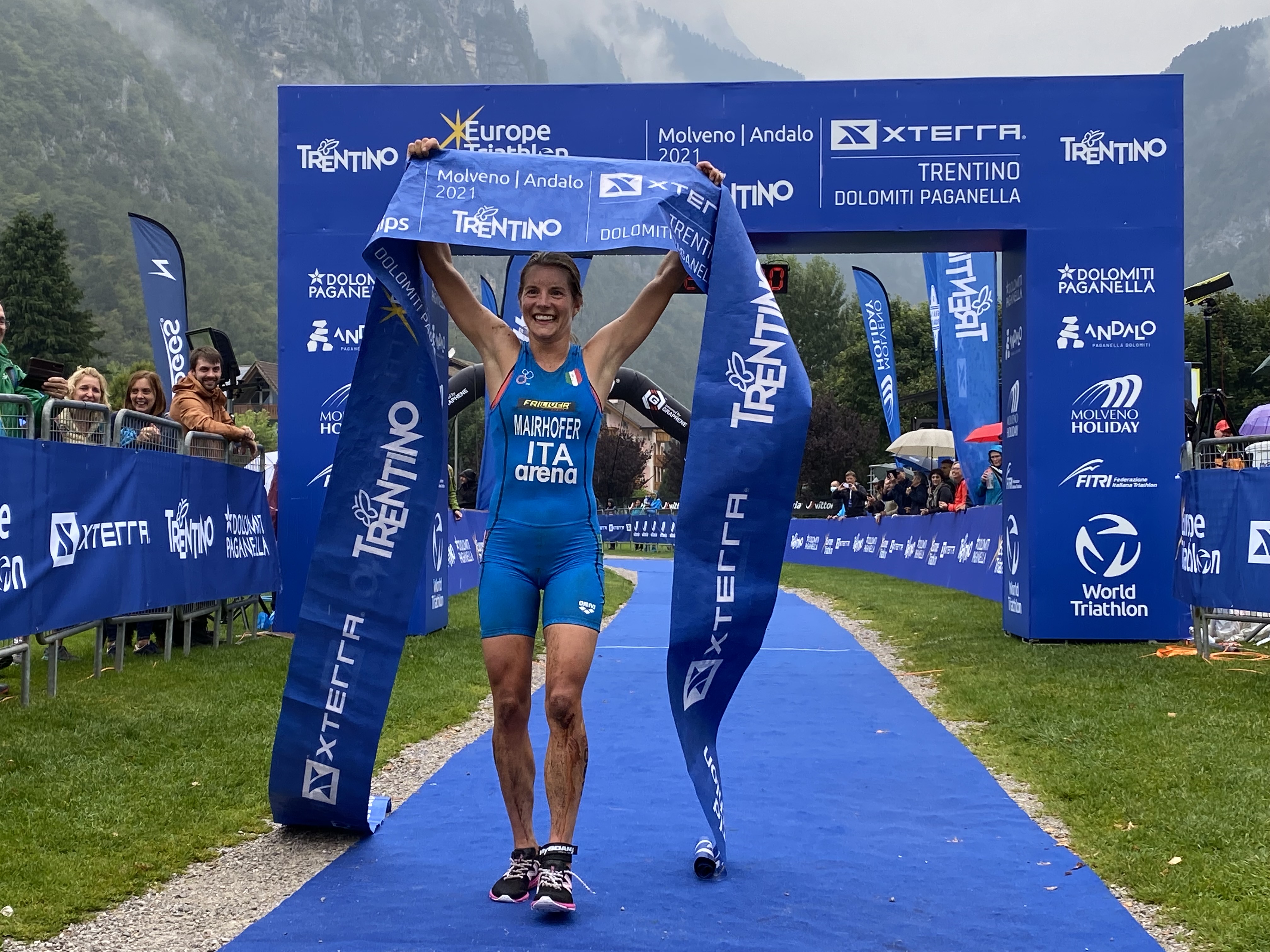