Riga delivers; thrilling finishes for both Men and Women 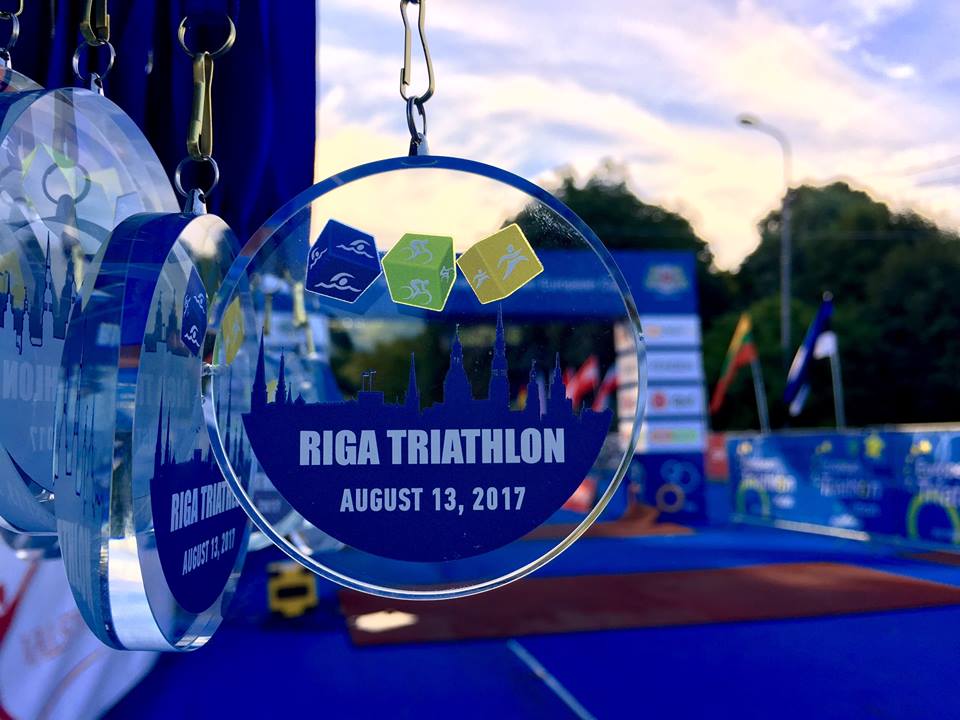 At one point last weekend it looked like Riga would be a wash out as heavy rains swept through the venue on Saturday night. As race day dawned, the weather had settled and with a drop in air temperature the conditions were perfect.
Rain, Rain, go away. 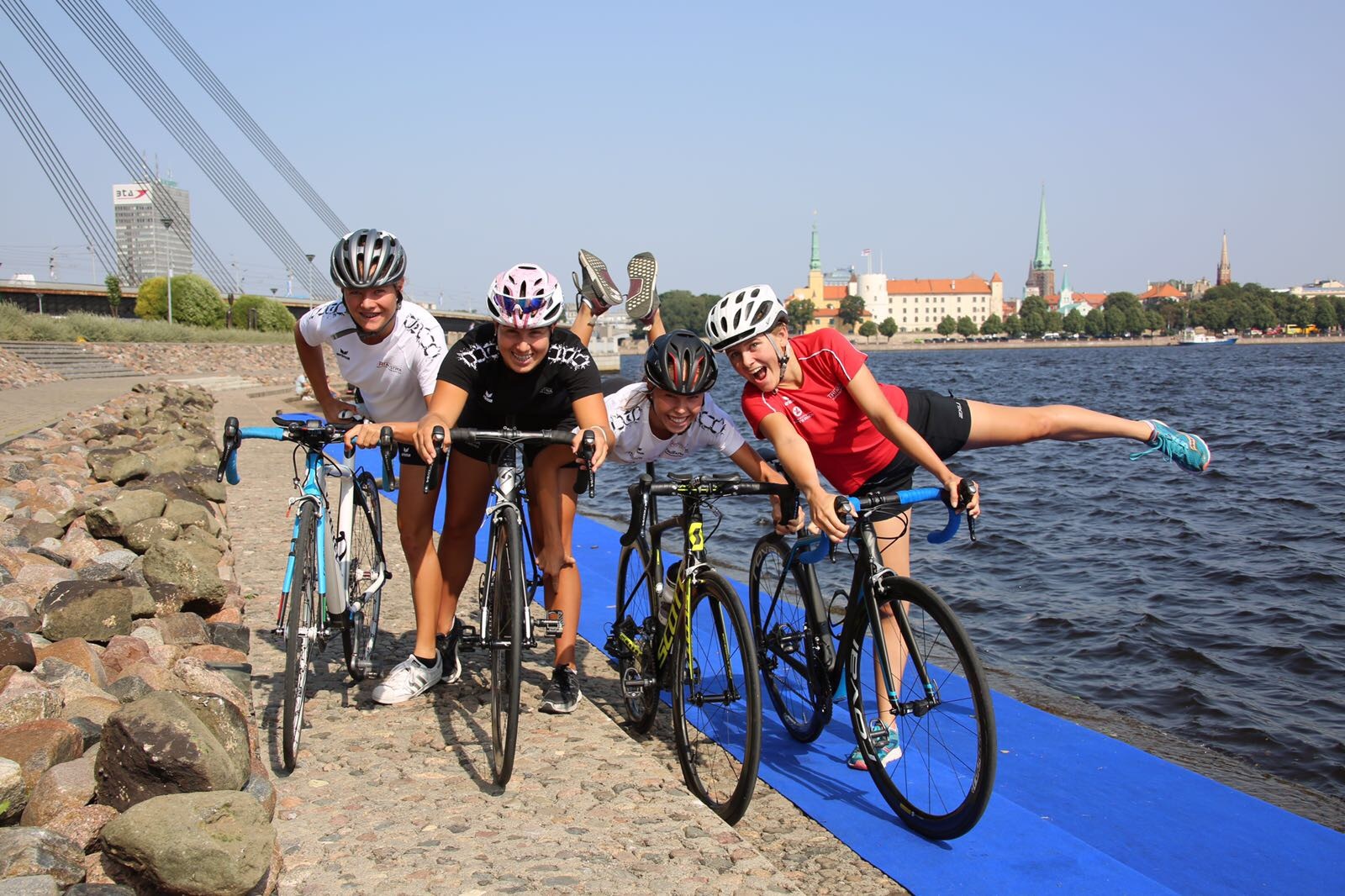 Having looked at the Junior Rankings (Nation Standings) it was clear that Austria had come to the event in a very strong position and our predictions of strength and depth in the Austrian Junior Women’s team proved correct with strong performances and with the Austrian flag very much in evidence.

The Junior Men raced to the max and provided a nail-biting finish that topped the weekend off nicely. No Austrian flags amongst the men though. 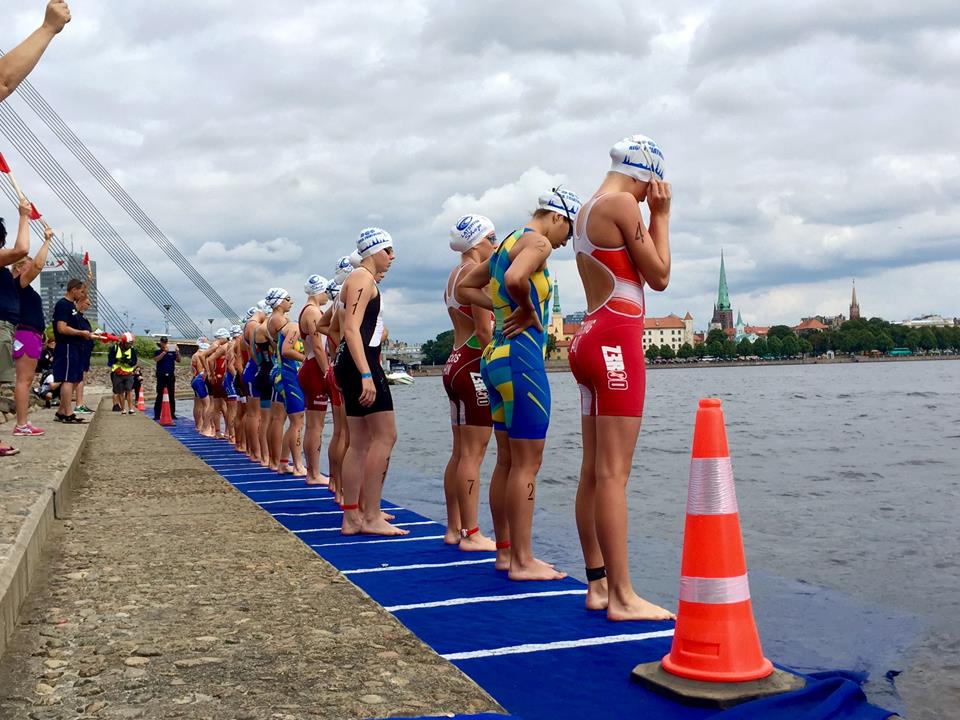 Well, the power we have seen from Ukraine’s Sofiya Pryyma in recent weeks was once again evident as she led them out of the water, with Belgium’s Kiara Lenaertz arriving in T1 a stride ahead. 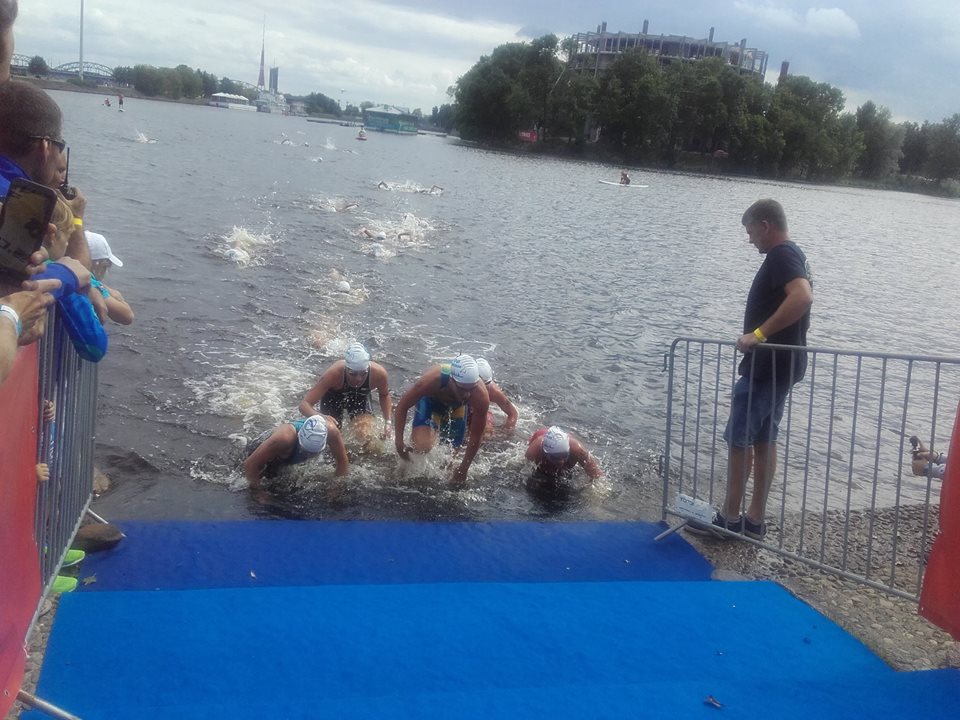 With them came race favourite, Pia Totschnig AUT who was joined by teammate, Magdalena Früh and Hungary’s Fani Soós. Hanne Peeters was part of this leading group as was Israel’s Raz Poradosu who was about to have the best race of her season.

The seven athletes sped out onto the bike course and held together tactically to assure a clear run from T2. 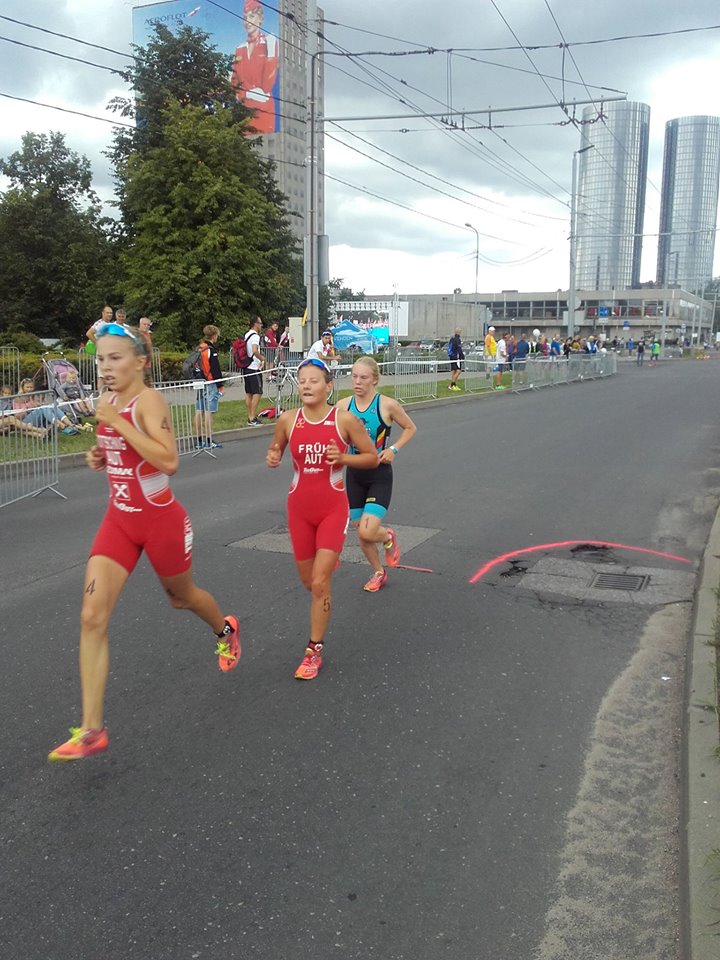 It would always be the faster runners that would benefit from this scenario and with Totschnig, Früh and Lenaertz having the pace, the three of them broke away from the others to create a lead that would deliver Austria and Belgium to the podium. 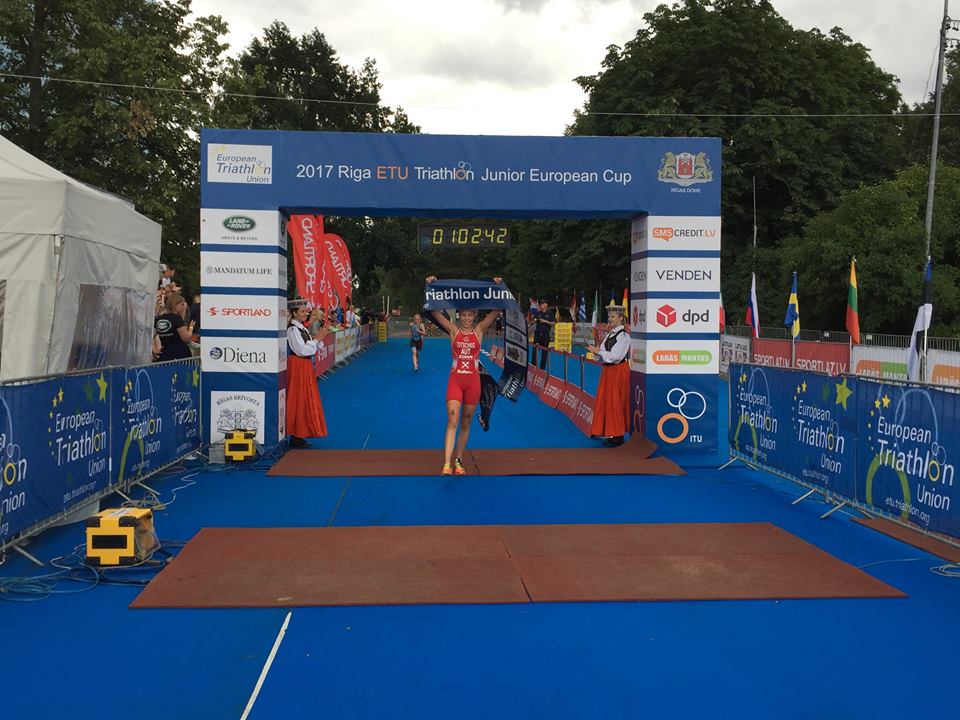 In the final stages of the run, Totschnig injected added pace to the run and that was it. She had just the advantage that she needed and with only a few paces separating them, she took gold, with Lenaertz coming between the two Austrians to take silver.

Soós and Pryyma battled it out and the ETU Cross Triathlon champion from Ukraine had to settle for a pretty good fifth behind the Hungarian. 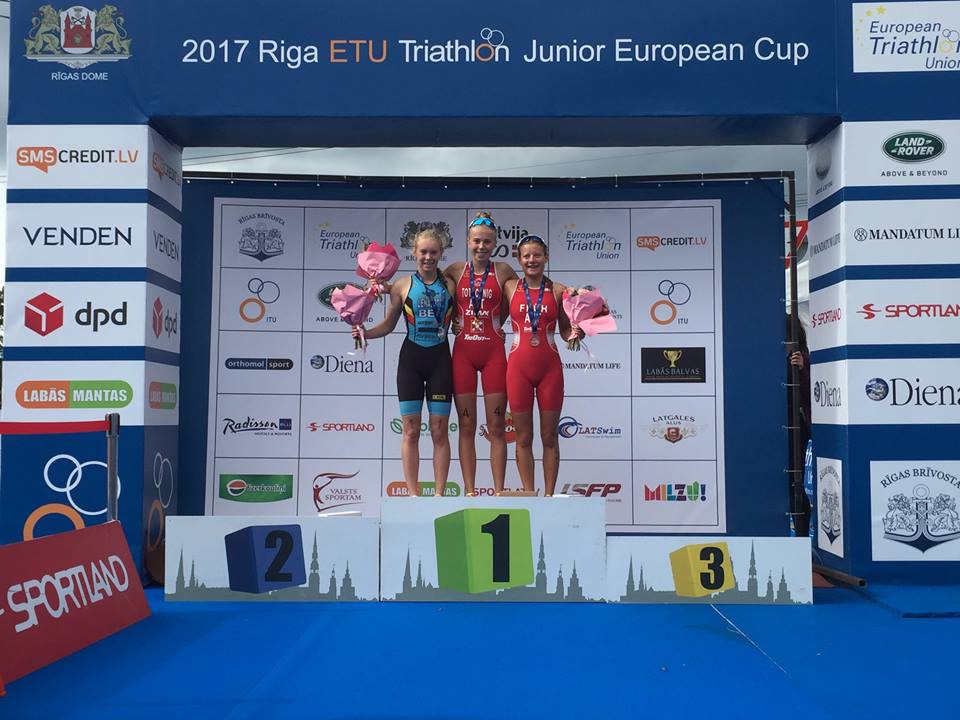 A well-run race from Totschnig that shows she has the ability to read the race as well as to kick the pace when needed. For Austria a really great result that will give them valuable points in the Nation Standings and increase their lead over Hungary and France.

After the race, Totschnig said, “Junioren Europacup Riga. Nach super schwimmen, wurde beim Radfahren extremst taktiert. Durch eine Tempoverschärfung auf der letzten halben Laufrunde konnte ich mir dann den Sieg sichern!  Junior European Cup in Riga. After a great swim the bike was ridden very tactically and then with an increase in pace on the last half of the run I was able to get the victory!” 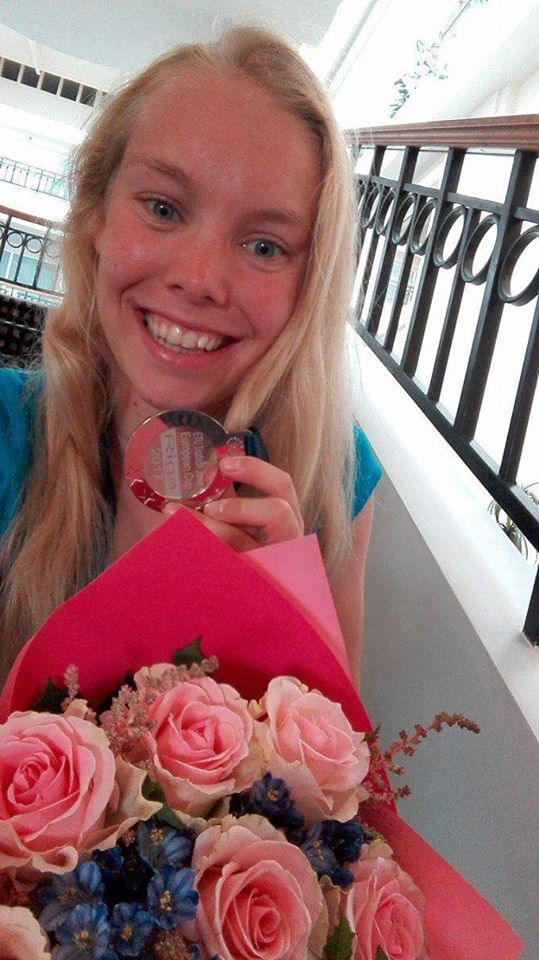 For Lenaertz, this was an important result, “My adventure started last month in Banyoles. After a good training camp we took third place in the European Championships Mixed Relay for clubs (juniors). This was my first European medal and I wanted an individual as well! Yesterday I was able to achieve that wish. After a solid swim I got out of the water in first/second place. Sadly the group on the bike (which was quite big) did not want to work. So tempo got really slow sometimes. The plan was to break away, but this could not work. After a good transition I ran 2nd, trying to catch up with Pia. Magdalena joined us, and we formed a small group of three. On the last running lap, Pia took off, I tried to follow but she was too fast. I got a little gap on Magdalena, but she managed to come back. This resulted in a sprint, with photo-finish. Happy took take 2nd on my very first individual European podium.”

Magdalena Früh said, “3rd place today in Riga! Super blessed to have done my second podium finish in a Junior European Cup. Good swim again and an amazing run with a good fight in the end. Congrats to Pia Totschnig & Kiara Lenaertz.”

For the Junior Men, race favourite was Henry Räppo EST. 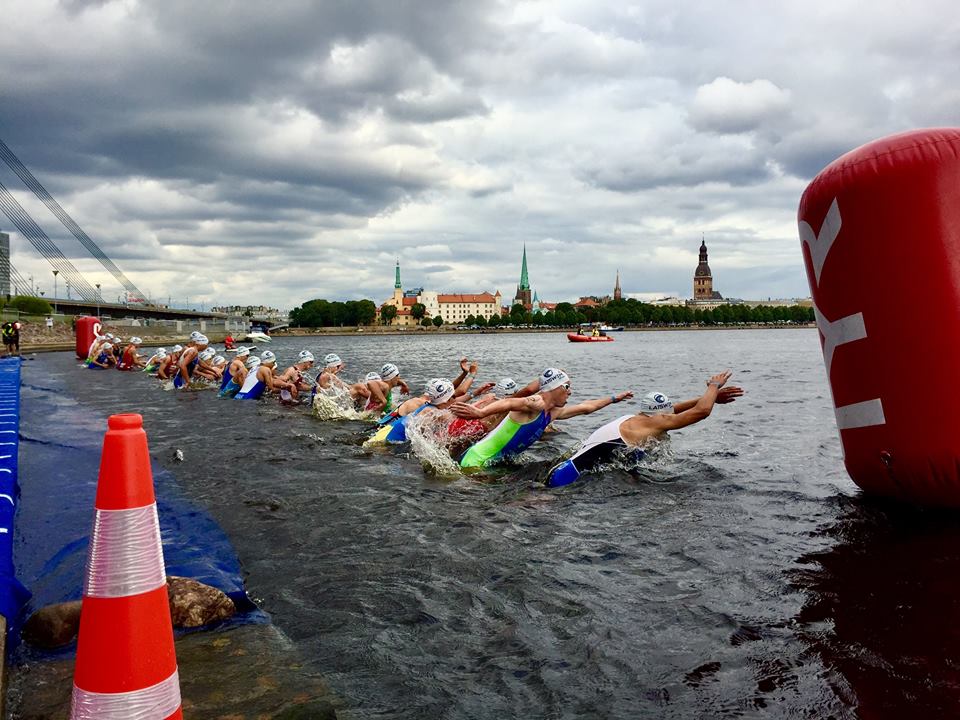 The race favourite was not able to lead them out of the water. 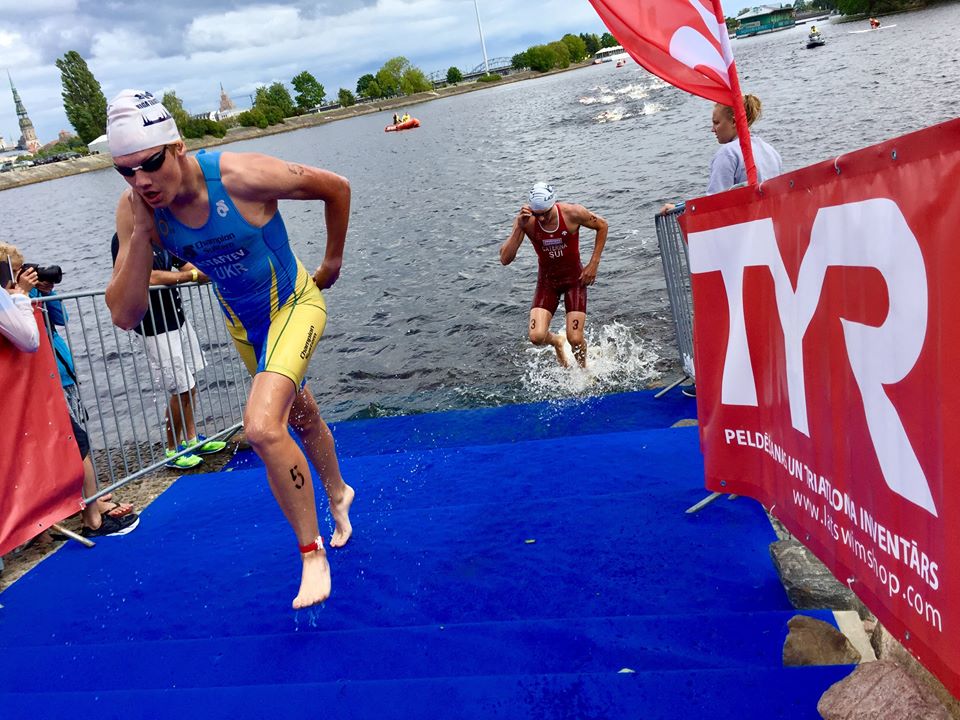 That honour went to Ukrainian athlete Oleksiy Astafyev with Sasha Caterina SUI on his toes. The pair of them worked hard initially but were soon caught by Germany’s Wilhelm Hirsch, Räppo’s  teammate, Kevin Vabaorg and Latvia’s Savelijs Suharževskis. 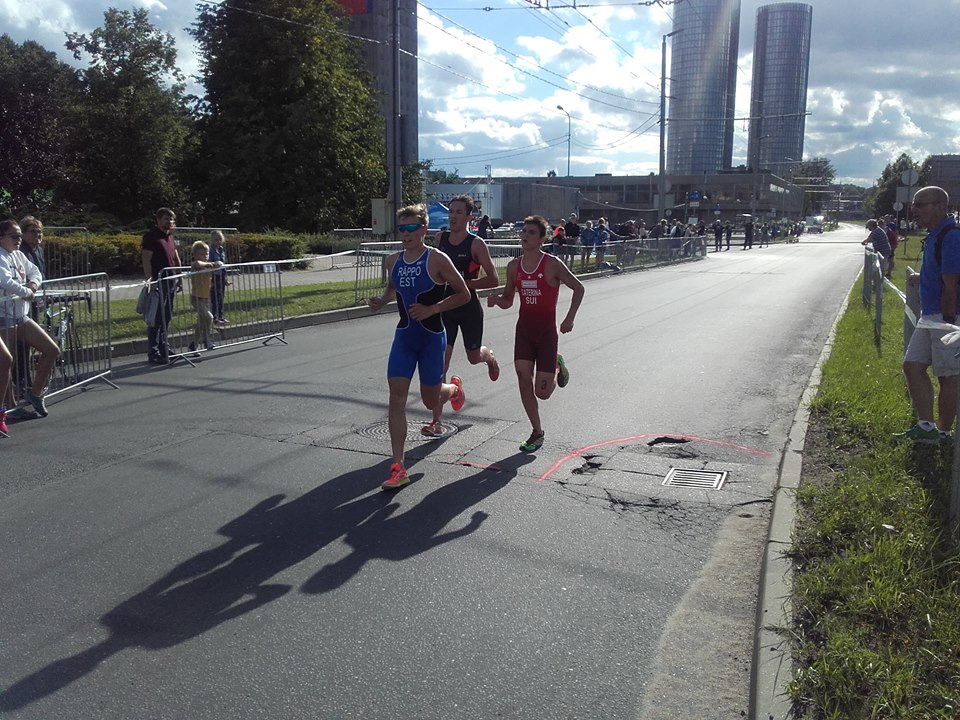 Good cooperation out on the bike course kept this group ahead of the main peloton and by the time they came into T2 it was once more going to be a race to the line with the faster runners having now the advantage. 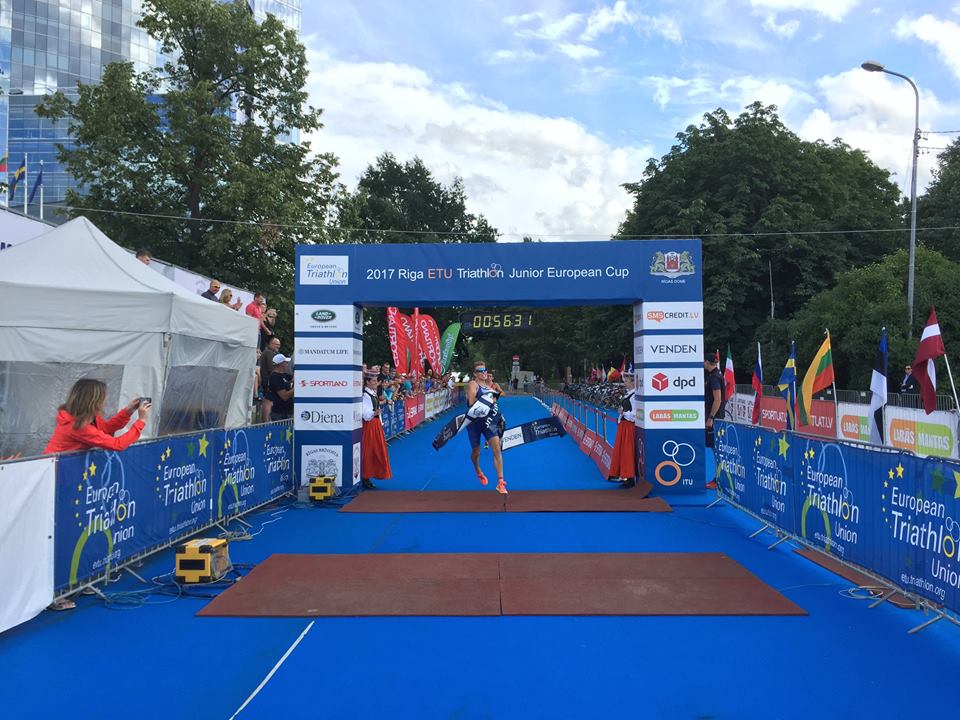 The run course had a dead turn about 300m from the finish and it was here that Estonia’s Räppo made his attack. Caterina could not respond to the kick from the dead turn and it was Räppo who stole the win in a nail-biting finish. 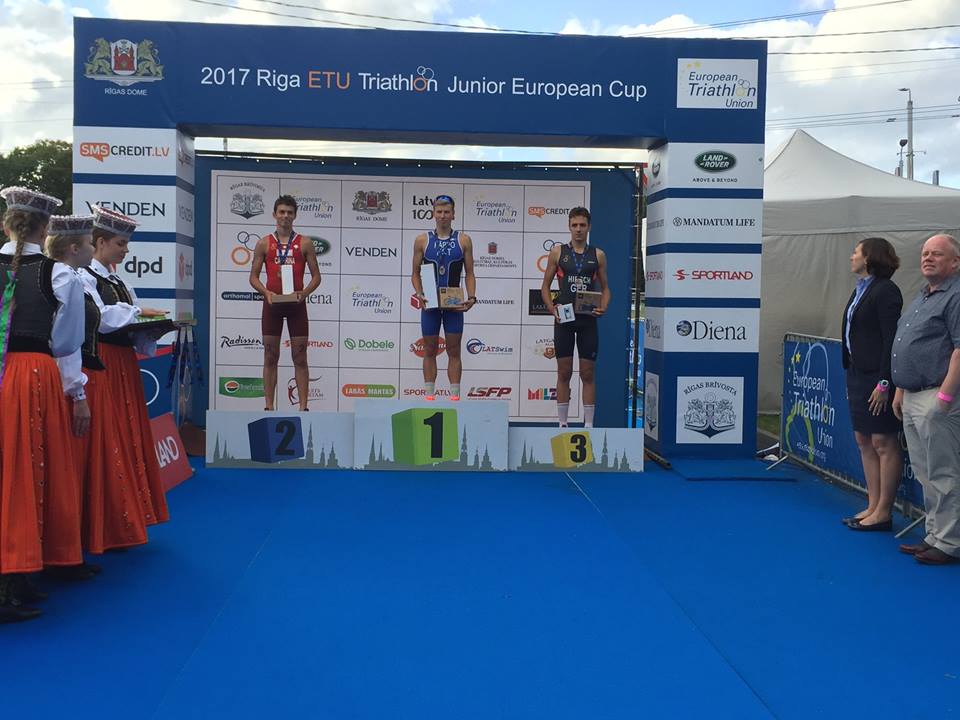 Gold to Estonia, Silver to Switzerland and in bronze medal position it was Hirsch, who gets his first ever podium. 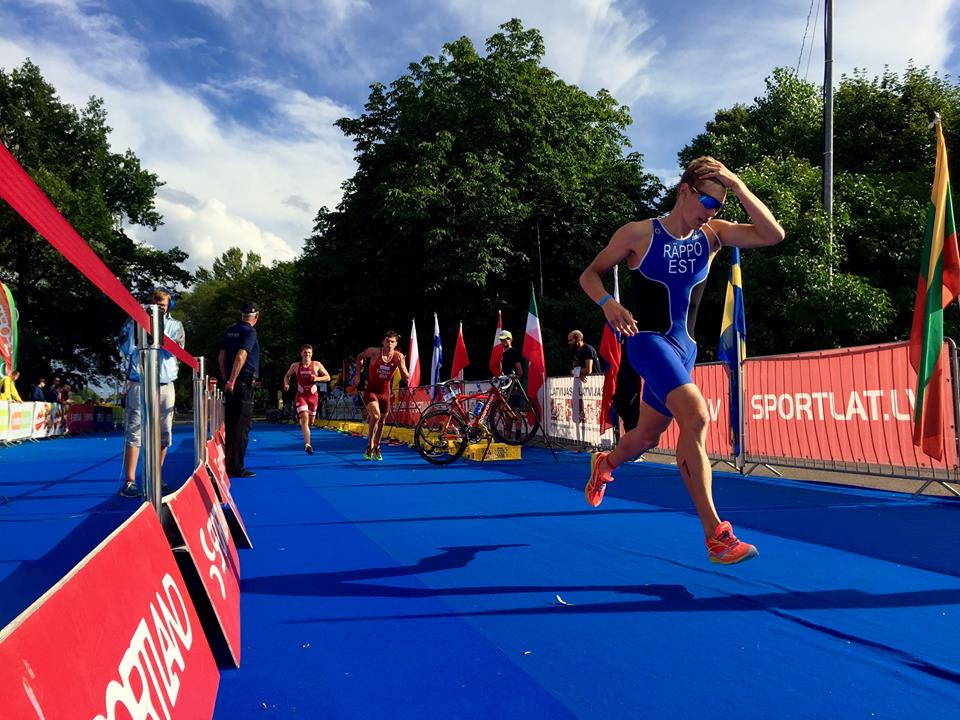 VICTORY!!! Fourth place in the Riga ETU Junior Cup last year was exchanged for gold this year. Despite the fact that I started with the race number 1 with more racing nerves, I felt OK and confident. With the swim, I came out in 3rd or 4th place and we soon got to be a group on the bike, which included also Kevin Vabaorg. During the bike, the cooperation worked most of the time pretty well, but we still made Kevin to do more work. Out on the run, we pushed the pace with the German and Swiss athletes and the medal was pretty sure. We ran fairly easily, because there was a decent passage. During the second round, I tried to break away from my rivals several times, but it did not work out so well. It came to just me and the Swiss athlete and with a final battle I managed to win. After a strong bike I was able to run out at a good pace. It gave me a lot of confidence in the upcoming competitions. My next start is on the 10th of September in Zagreb, the ETU Junior Cup and a week later in the Junior Championships in Rotterdam. Thank you all the sponsors and supporters!”

Riga has been growing in popularity. With the Radisson offering spectacularly-priced accommodation this year for athletes, coaches, spectators and officials and with the TV coverage that was so good, this event has grown into a festival of triathlon in the Baltic. The volunteers and technical officials joined together with the LOC to say thank you to the athletes. 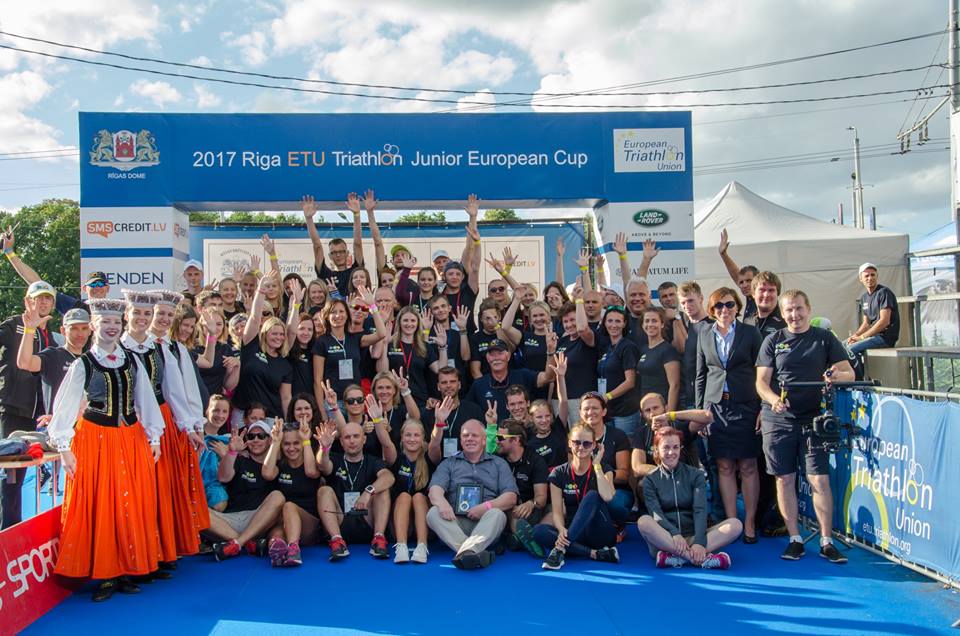 With the country celebrating 100 years in 2018, it can only get better.

The weekend also hosted the Baltic Championships and a number of other smaller events to make this a mass-participation weekend of triathlon for all ages. 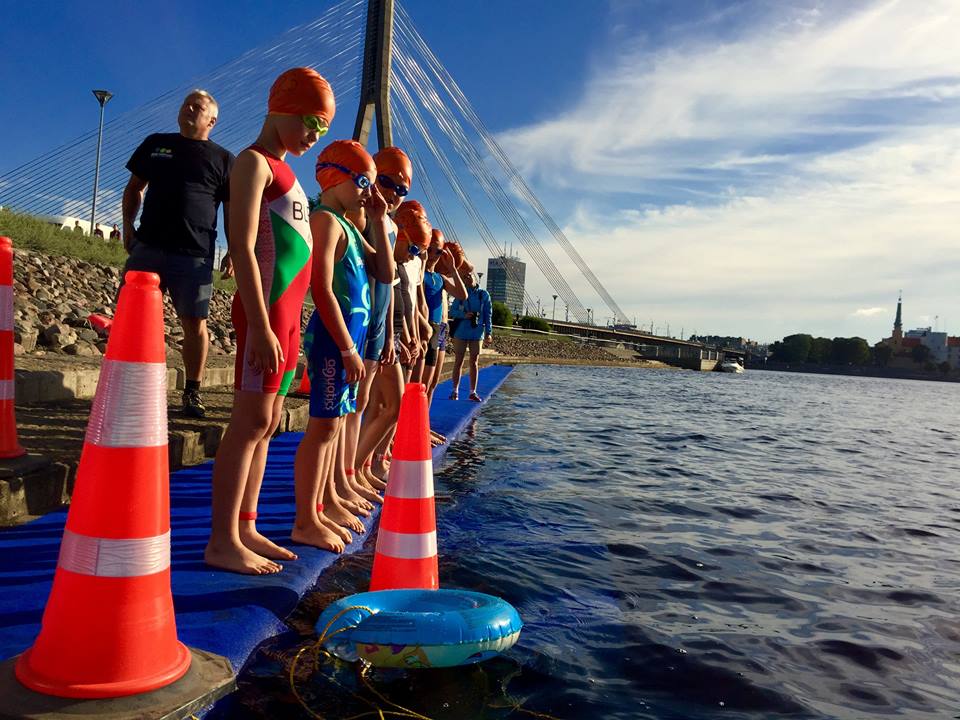 The Baltic Championships Women’s race was dominated by Ukrainian athletes, with Vira Sosnova taking the win. She was just ahead of teammate Margaryta Krylova. From Belarus, Tatsiana Luksha took bronze. 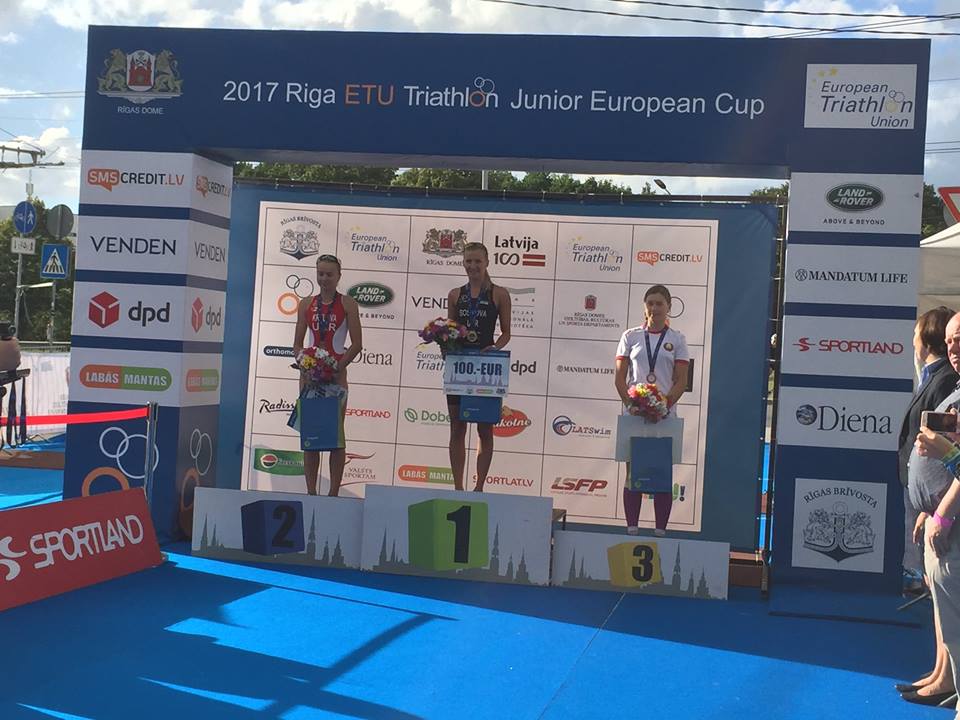 In similar vein, it was a great day at the races for the Belarus men, who took gold and silver. Gold went to Mika Katsianeu, with silver going to Mikita Bely and bronze to Ukraine’s Ivan Menshykov.