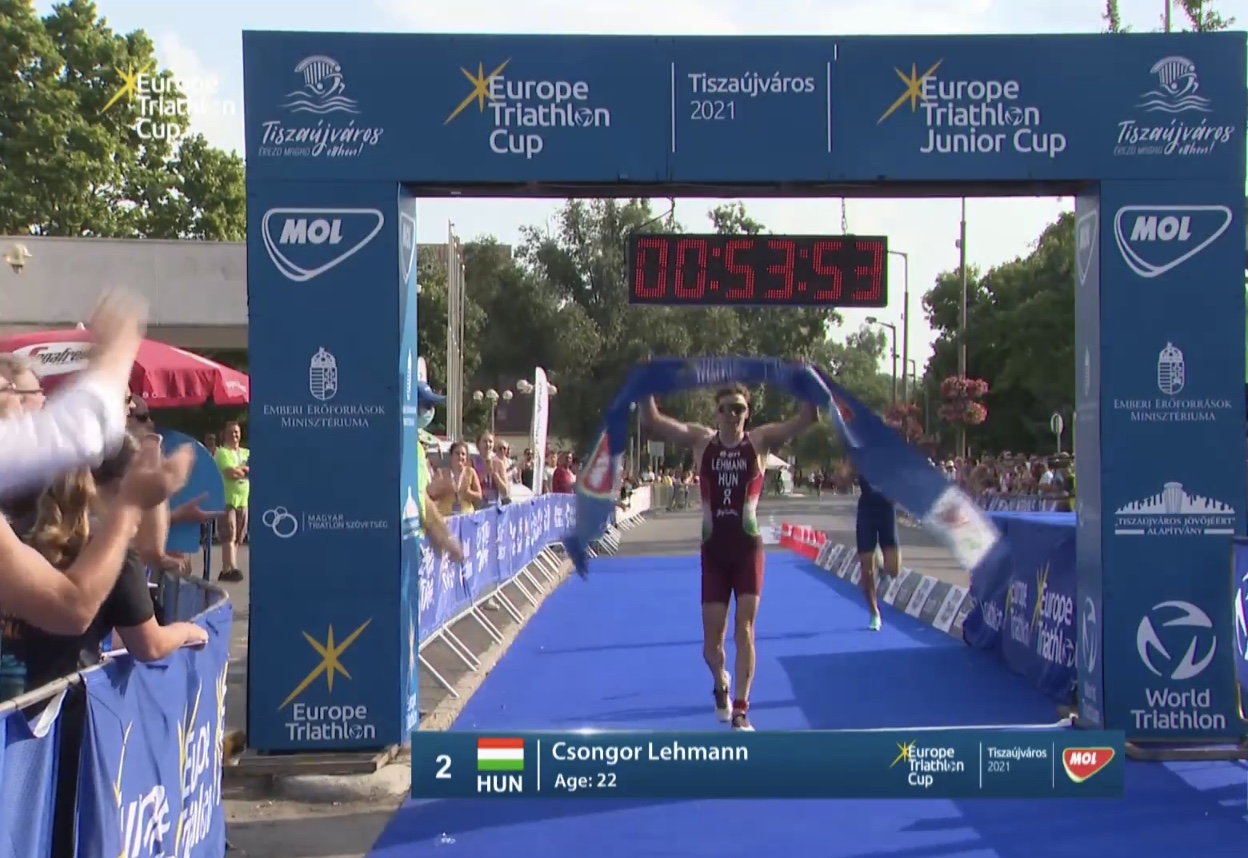 A marvelous weekend with plenty of action in Hungary for the European Cup and Junior Cup Tiszaújváros. On Saturday all the semifinals took place that gave access to the qualified athletes for a spot to the Sunday’s Finals. 31 Elite men and 33 Elite women while in the Junior Finals 31 Men an Women were qualified in the following race distances. In the Junior Finals: Swim 500m (2 laps), Bike 12,5k (5 laps), Run 3,6k (3 laps). In the Elite Finals Swim 750m (3 laps), Bike 20k (8 laps), Run 5k (4 laps).
In the Women Junior Final Laura Holánsky (HUN) did a superbe swim in 6:43 leaving behind Sophie Gronberg Christensen (DEN), Márta Kropkó (HUN), Aviv Levi (ISR), Dana Prikrylova (CZE) and Margareta Vrablova (SVK). In the bike soon after T1 a group formed with those  athletes that managed to keep their slowing decreasing advantage till the end from the other chasers. However Christensen (DEN) could not keep the pace and was taken by the chasers. In T2 Vrablova made an incredibly fast transition and immediately took the lead of the race and on her shoulders till the last lap was Kriprylova who had to surrender to the immense pace of the Slovakian. Only the Canadian Isla Britton with a solid run performance managed to take on the final lap second place and finish with a beautiful silver on her neck. The 16 years old Margareta Vrablova wins the European Junior Cup with the time of 41:28. In silver Isla Britton (CAN) in 41:33 and bronze for Dana Kriprylova (CZE) in 41:46.
In the Junior Men Final an incredibly solid performance of the Brit Daniel Dixon who after a brilliant swim in 6:16 was alone in T1 followed by Gergö Dobi (HUN) and with whom managed to make a stunning performance on the bike which was a flat course but because of the many twists and turns it required a lot of concentration to keep the pace high not to let the three chasers Márton Kropkó and Gyula Kovács (HUN) and Matthew Shipley to take them. The leaders managed to reach T2 and with a brilliant pace Dixon (GBR) immediately took the lead in complete control of the run and behind Dobi was struggling to keep second place with the chasers on his heels  trying to get a spot on the podium. The third medal was of the Israeli Chasky who did an incredible performance on the run and grabbed a precious bronze. Daniel Dixon (GBR) wins the European Junior Cup in Tiszy in 37:05, second place for the home athlete Gergö Dobi in 37:29 and third place for Elai Izhak Chasky (ISR) in 37:45.

In the Elite women with a phenomenal swim the 23 years old Sophie Alden (GBR) left everyone behind and only Team companion Olivia Mathias and Aussie Natalie Van Coevorden could keep the pace and reach T1 with the chasers more than 20 seconds behind. The thre athletes took the lead of the race with the chasing group behind which could not get them until the end. The Brit did an incredible T2 and immediately took the front with the chasing group battling behind. After one lap Audrey Merle (FRA) together with Costanza Arpinelli (ITA) working together managed to gain precious seconds to Mathias and on the last lap reached her. She then with a strong sprint managed to claim victory over Merle and Arpinelli who had to stop before the finish for a penalty but still managed to finish in third. The British Olivia Mathias is gold in 1:00:16, silver for Audrey Merle (FRA) in 1:00:36 and bronze for the Italian Costanza Arpinelli in 1:00:27. 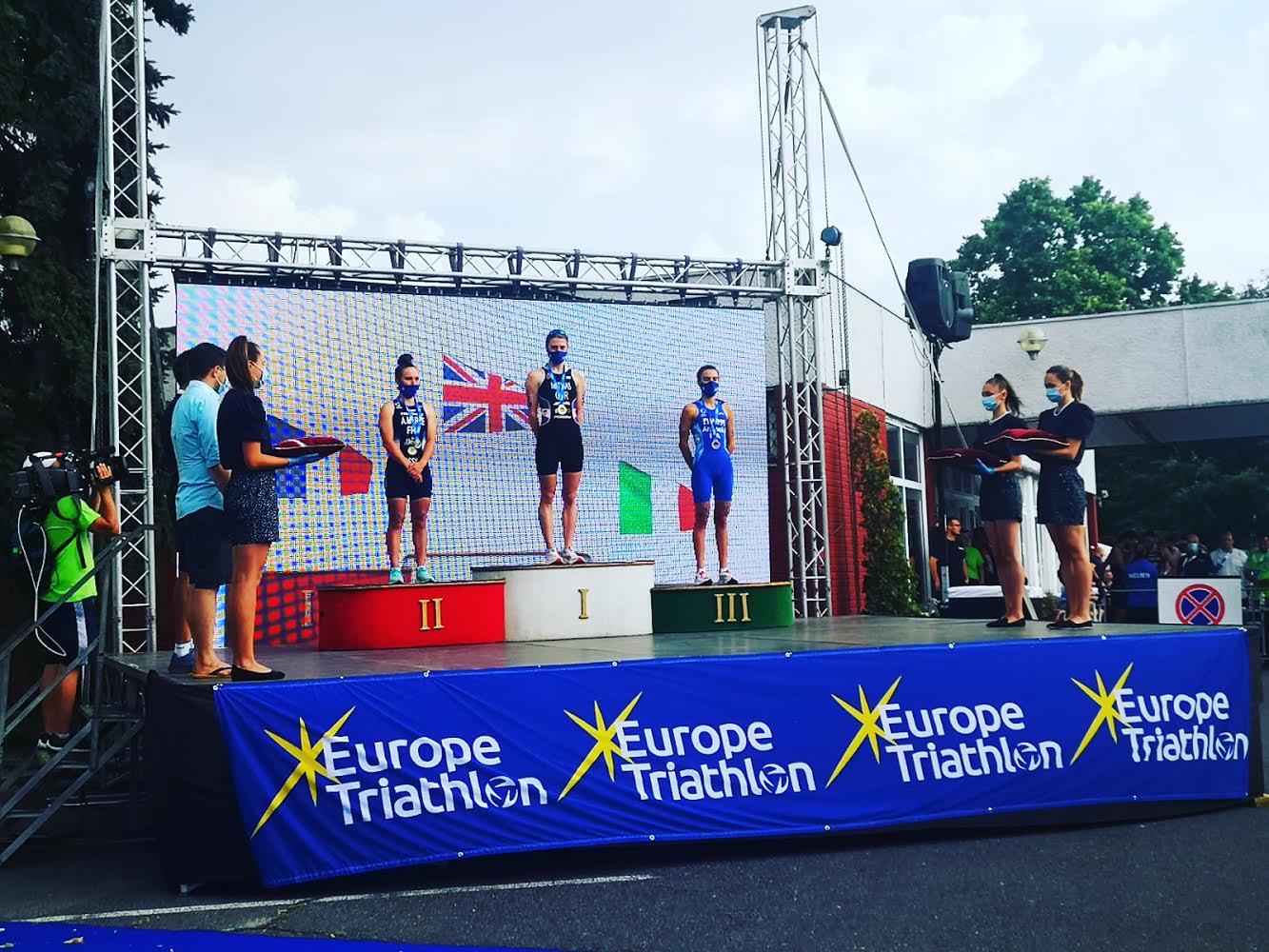 In the Elite Men a brilliant swim of Márk Dévay (HUN) created a breakaway with other three Team companions Csongor Lehmann and Bence Lehmann and the Italian Nicolo’ Strada. In T1 Dévay and Strada managed to take the lead on the bike till the last lap when they were reached by German Simon Henseleit. After T2 Henseleit tried to take the lead but home athlete Csongor Lehmann with his excellent running skills and for his home crowd caught him immediately and imposed a stunning run pace till the end. Behind him battling for the other spots on the podium Michele Sarzilla and Nicola Azzano (ITA), Radim Grebik (CZE) and Boris Pierre ( FRA). On the Blue carpet Csongor Lehmann easily grabbed his gold in home Tiszy in 53:54, silver medal for Nicola Azzano after a sprint finish with his team mate in 53:55 and bronze for Michele Sarzilla in 53:59.

The 2021 Europe Cross Triathlon and Cross Duathlon Championships are set…
This coming weekend in the superb Valencia, in particular La Marina, is…
At the European Junior Cup in Silver Lake that took place 28-29 of August,…
more news →