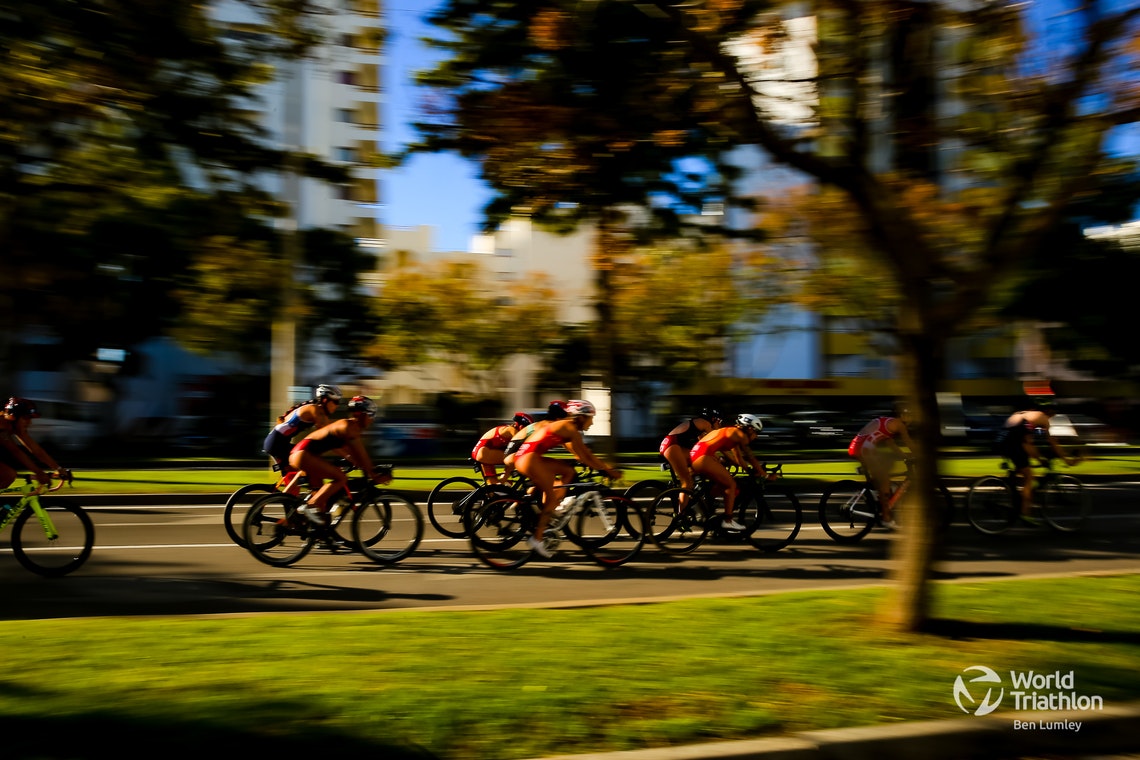 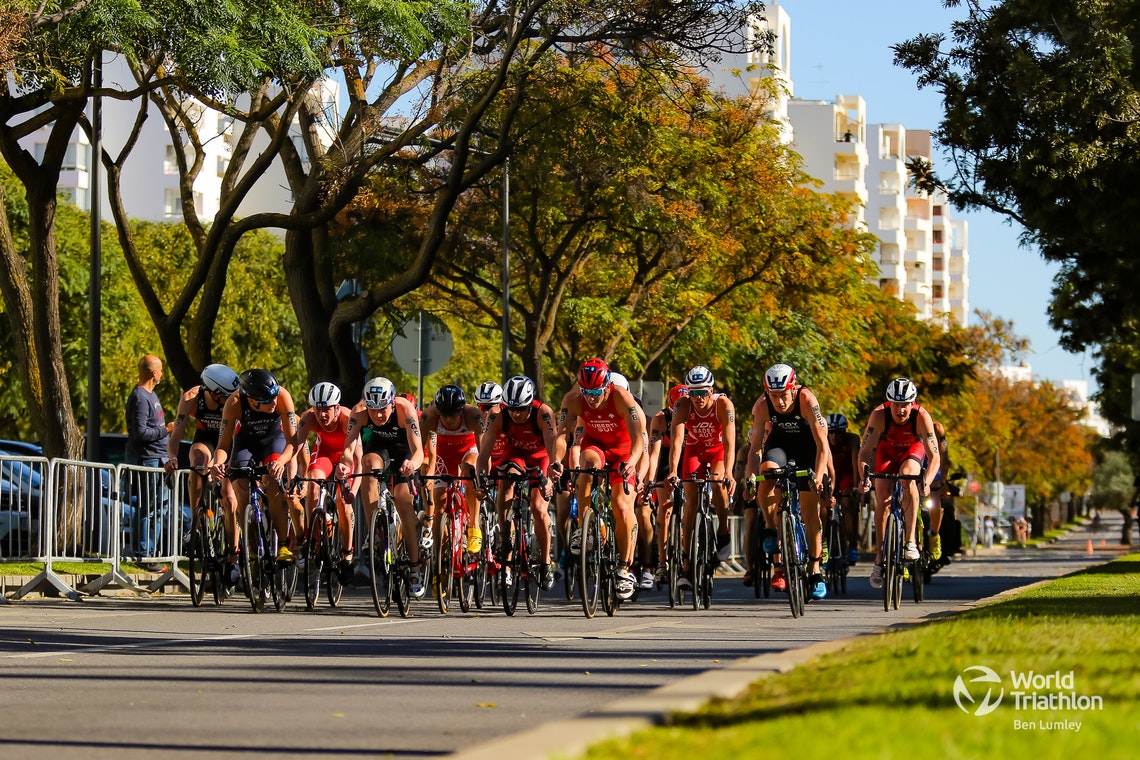 It was a weekend of fire, the weather was hot. The race of the Junior males who competed for the World Championships took place on Saturday 6. The podium was won by three European boys: Igor Bellido from Spain, Joao Nuno Batista from Portugal, and Dominic Coy from Great Britain. Congratulations! On Saturday afternoon the Elite men competed, 73 athletes started. Miguel Tiago Silva from Portugal comes out first from swimming and begins his escape by bike with Frenchman Anthony Pujades. For the first lap on the bike, they remained at the head of the race, chased by a huge group. The other 5 bike laps were done with various changes with different athletes but always in a big group.
Dutchman Ian Pennekamp sprinted in the last kilometers, taking the first position, and comes out from the T2 first. With a lead of 44 seconds.
During the run, he was joined by the Spanish guy David Castro and the French guy Anthony Pujades. The German Simon Henseleit also joins the leading group. This European Cup was won by David Castro Fajardo from Spain with a lead of 19 seconds with a total time of 1:46:58. The silver medal was won by Anthony Pujades from France and the bronze medal by the German Simon Henseleit. David Castro commented on his social profiles the happiness of winning this European Cup in Quarteira, as in 2017 he had not managed to finish the race, after 4 years he has got his revenge. This just means…never give up, always chase your dreams, sooner or later they will come true! 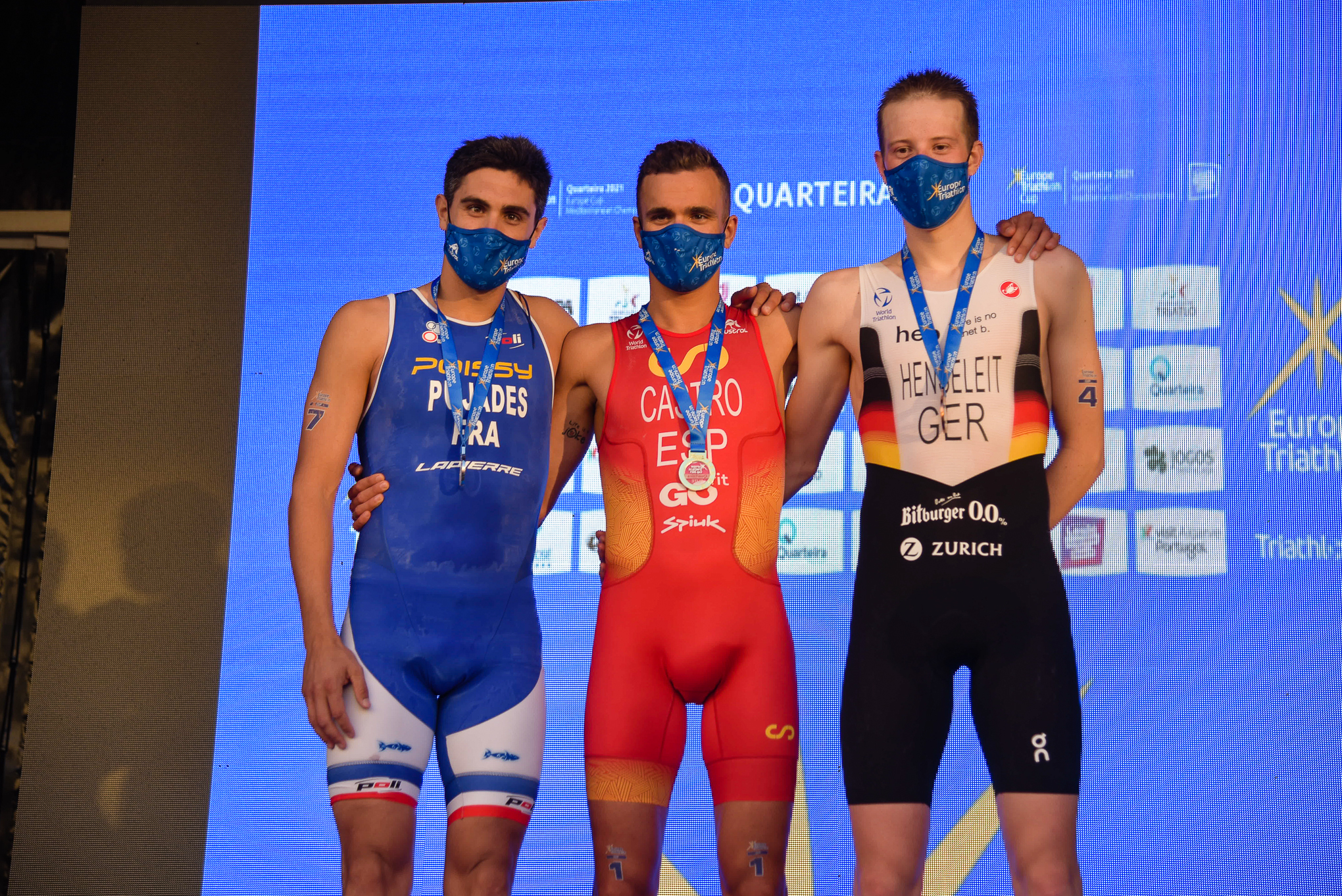 The podium of the Mediterranean Championships was composed of David Castro Fajardo, Anthony Pujades, and Ander Noain Lacamara! (see the image below) 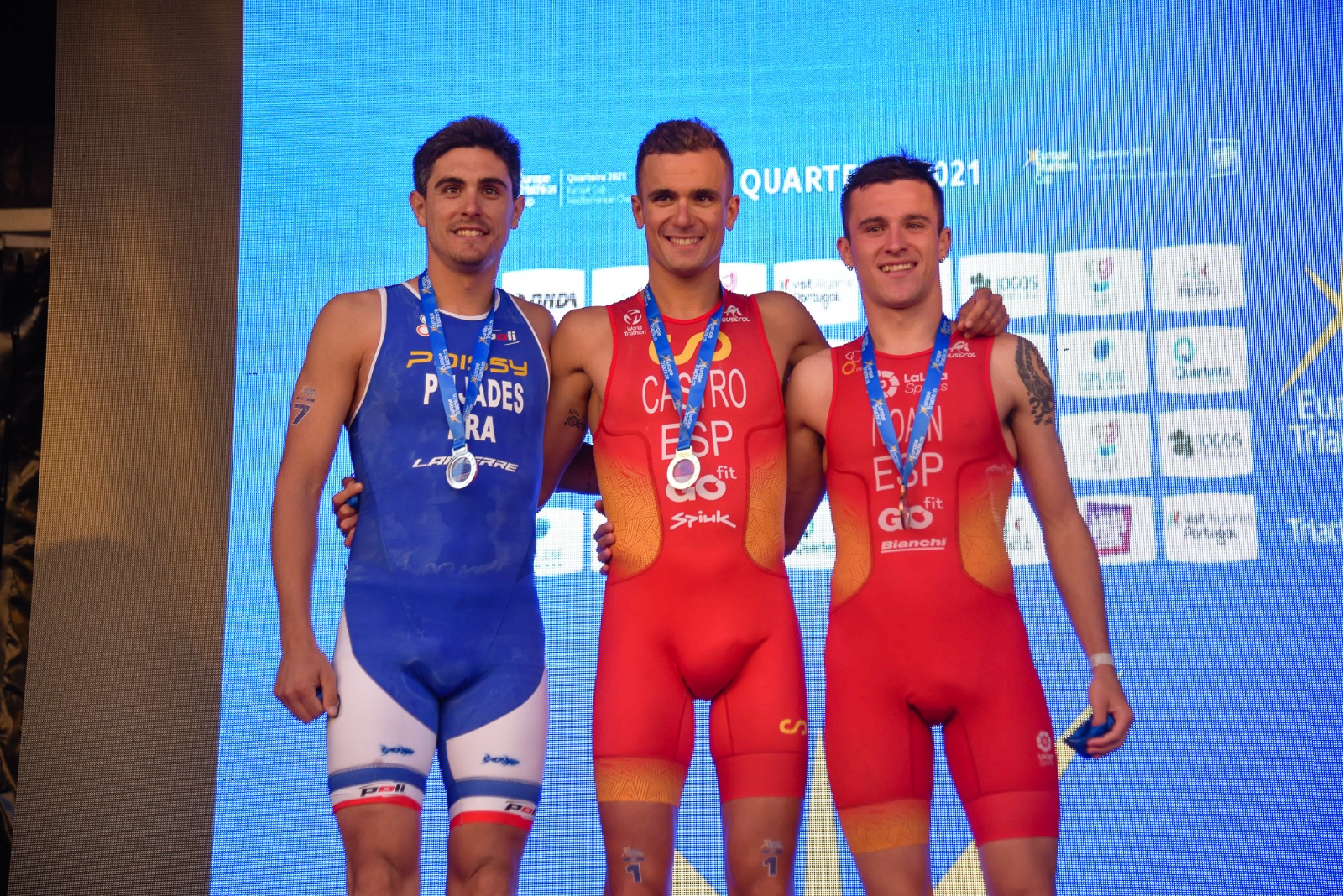 Early Sunday morning the Junior girls competed for the World Championships.The three European girls who conquered the podium are: Jule Behrens from Germany, Tilda Mansson from Sweden and Maria Casals Mojica from Spain. Great race! Around lunchtime, the Elite women left very fiercely. At the start the Elite women were 39.The first girl to get out of swimming and go cycling as a leader was the Italian Sharon Spimi. The Italian girl made 1 solo bike lap at the head of the race. She finished the other 5 laps together with Norwegian girl Lotte Miller, helping each other. The rest of the women were divided into groups to chase the two girls in the lead. The Norwegian enters in T2 first and comes out together with the Italian girl and the last 10km of running begins. Lotte Miller remains in the lead of the race, around 5km she begins to suffer from severe leg cramps that force her to stop and stretch. In third and fourth position ran Cecilia Santamaria from Spain and Maria Tomè from portugal, they were trying to help each other with a good race pace to go and catch Sharon Spimi. But they were joined from behind by the very young Swiss Nora Gmur. Sharon unfortunately is caught by the other girls and goes to fifth position. Unexpectedly from behind with an incredible race pace comes the Italian girl Ilaria Zane who at that moment was in 6th position.She caught all of them and places herself in the second position. With the last strength to cover the last kilometers, the girls cross the finish line. The European cup was won by Lotte Miller from Norway with a lead of 55 second with a total time of 2:02:52. The silver medal was won by Ilaria Zane from Italy and the third step of the podium went to Switzerland Nora Gmur. 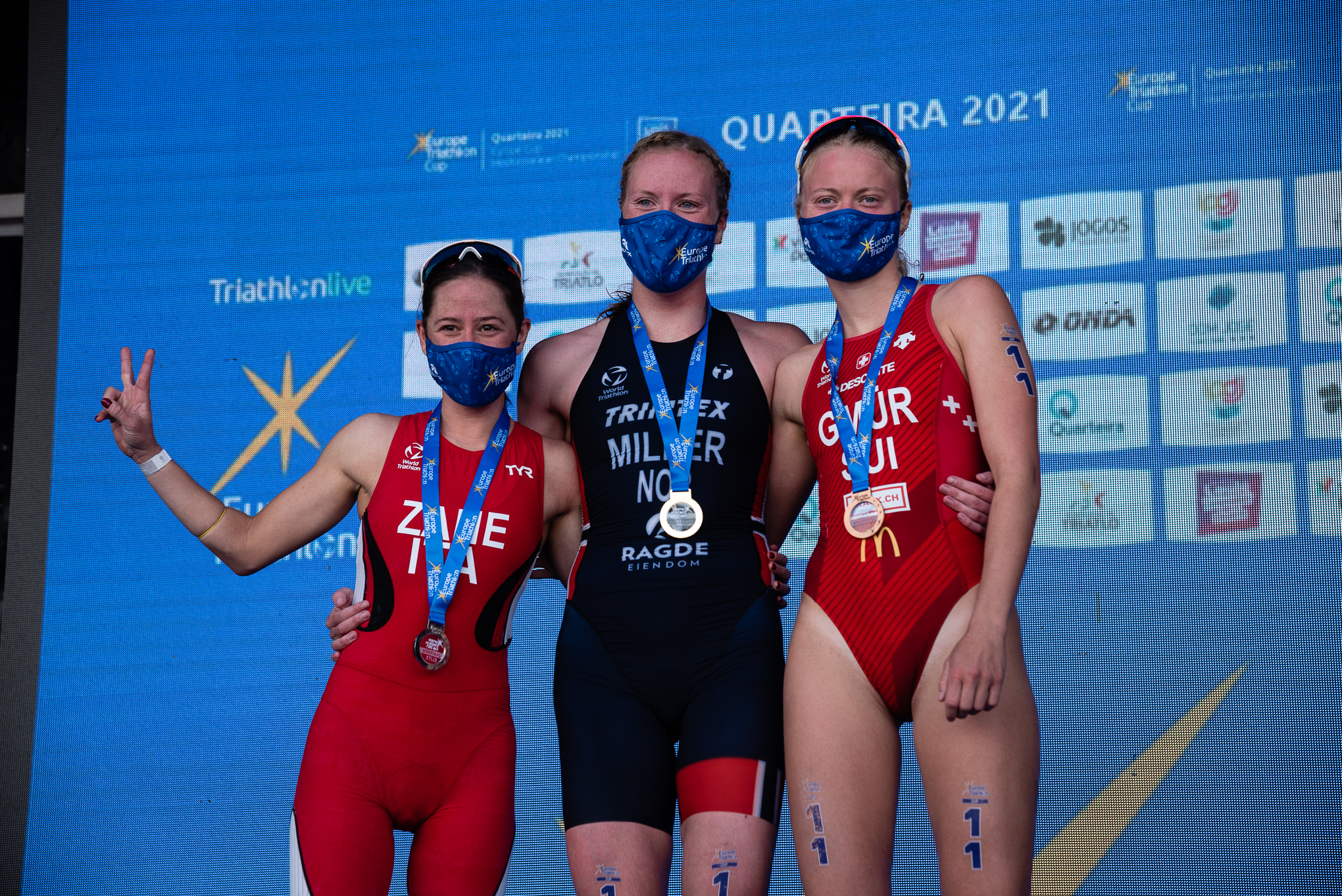 The podium of the Mediterranean Championships was composed of Ilaria Zane, Cecilia Santamaria Surroca and Maria Tomè. (see the image below) 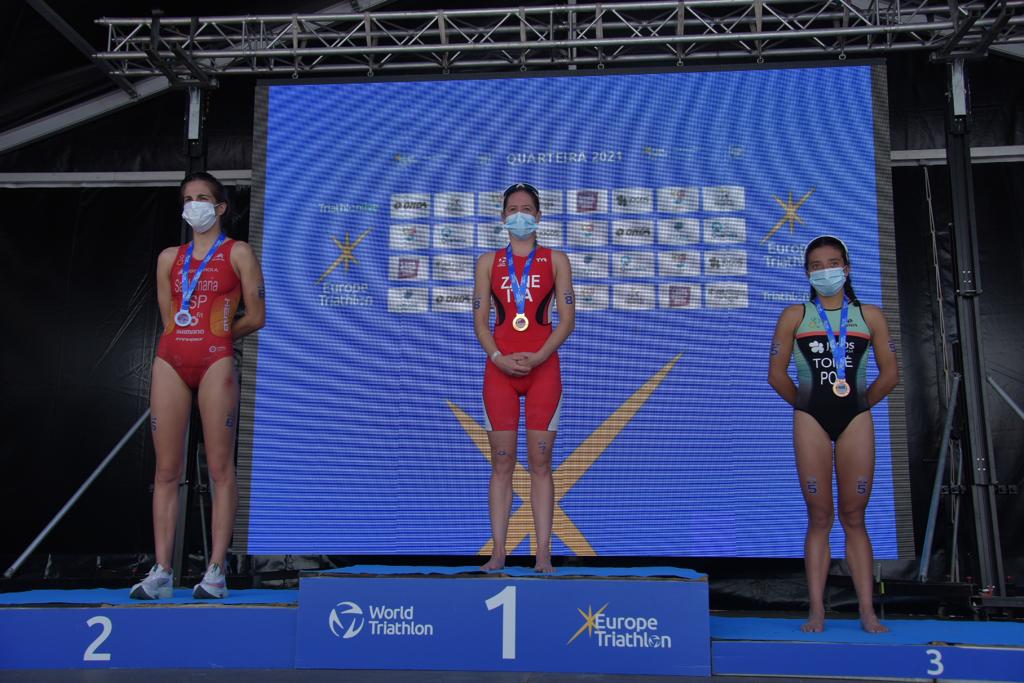 We wish all athletes a fantastic off season, recharge your batteries because a crazy calendar awaits us for the new year!