Athletes from Austria, Czech Republic, France, Germany, Great Britain, Romania, Russia, Spain and of course the host nation, Italy, had made their way to Sicily and then high up into the hills around Nicolosi, for the 2018 Etna ETU Winter Triathlon European Championships.

Despite early concerns about the lack of snow (ten days before the race the venue was dry, the snow was absent and the spring plants were beginning to show) a massive snowfall with high winds came and in fact shut off the venue for a couple of days. The German Team had found ideal accommodation at the very venue but found their vehicles under 90cm of snow.

The local municipality worked hard to free up the roads but on the day before the race, with athletes, coaches, officials and the LOC trying to get to the venue, it was the Romanian team that gave extra assistance to the cars on the slippery roads.

Winter Triathlon is pretty unique and you need a special team of people to make it all happen. The LOC, led by Mario Lombardo, had called upon the skills of Marco Zaffaroni as race director. Marco managed to deliver an excellent race in Carcoforo, when the sunshine on one side of the high valley was enough for the Russian Team to race in shorts while the shaded side was bitingly cold. 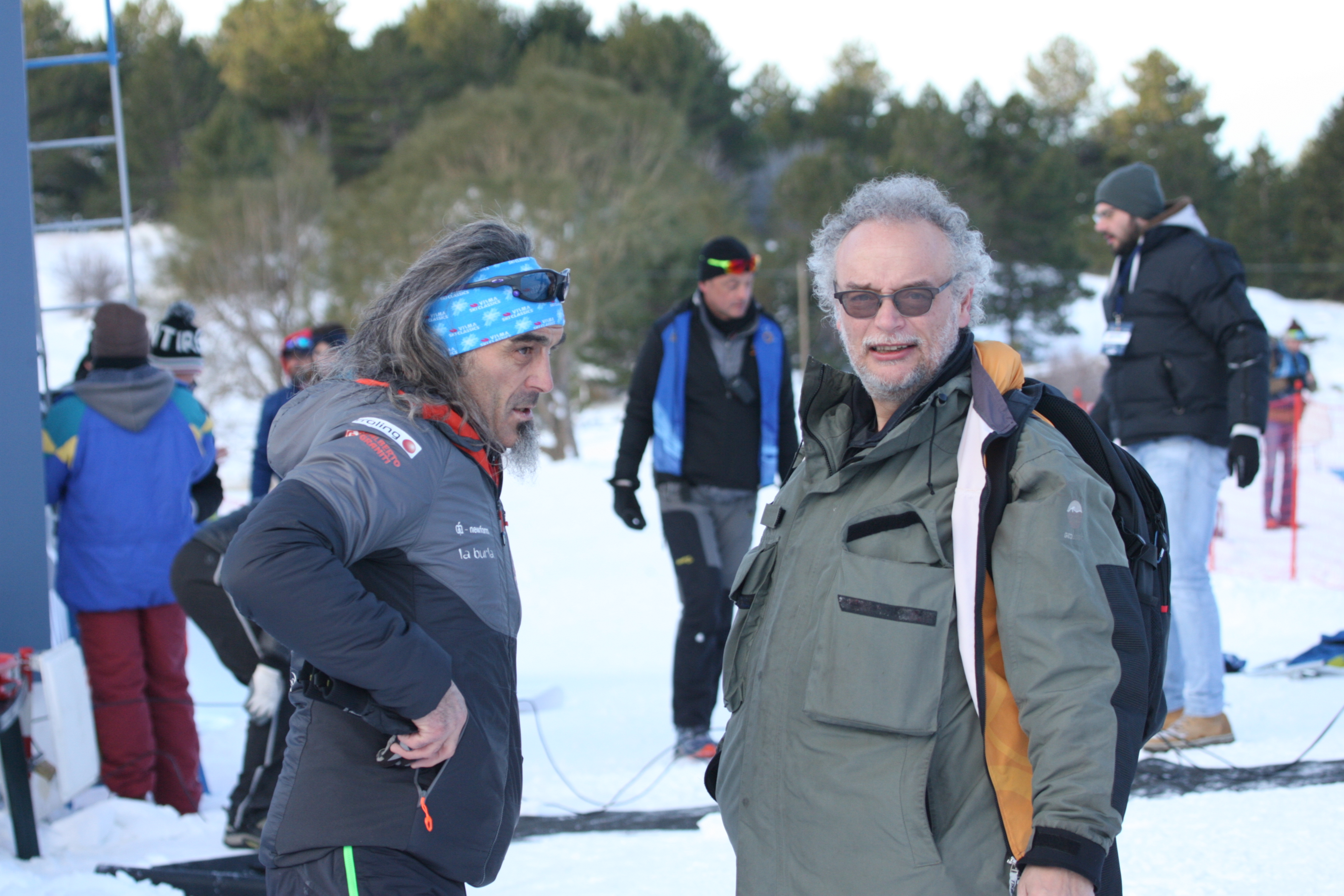 Working closely with Technical Delegate, Enrique Quesada and his assistant, Adina Dusa, both fresh from the highly successful 2018 Cheile Grădiștei ITU Winter Triathlon World Championships, the whole game play came together and although we lost the team relays, there was one spectacular day of racing.

With expected sunshine and a rise in temperatures, the Technical Delegate had set the timeline to see the Elite, U23 and Junior athletes race first and then, once the course and finish area was clear enough, to set off the Age Group wave. Obviously this was an imprecise science but with the sunshine now quite enjoyable and with the views, oh so stunning, the Age Group athletes enjoyed the moment, setting up their bikes and skis and then cheering on the athletes.

The time had come. All athletes were called back into Transition to stand next to their bikes. Then, one by one, starting with the two Para-athletes, they were called to the start line. A wonderful sight greeted us as high-fives were given by one and all, as Transition emptied and as the start area filled.

The heartbeats kicked in, silence followed and then Race Referee, Andrea Homberger, celebrating his birthday by volunteering to be at Etna, gave the start signal and the athletes set off. 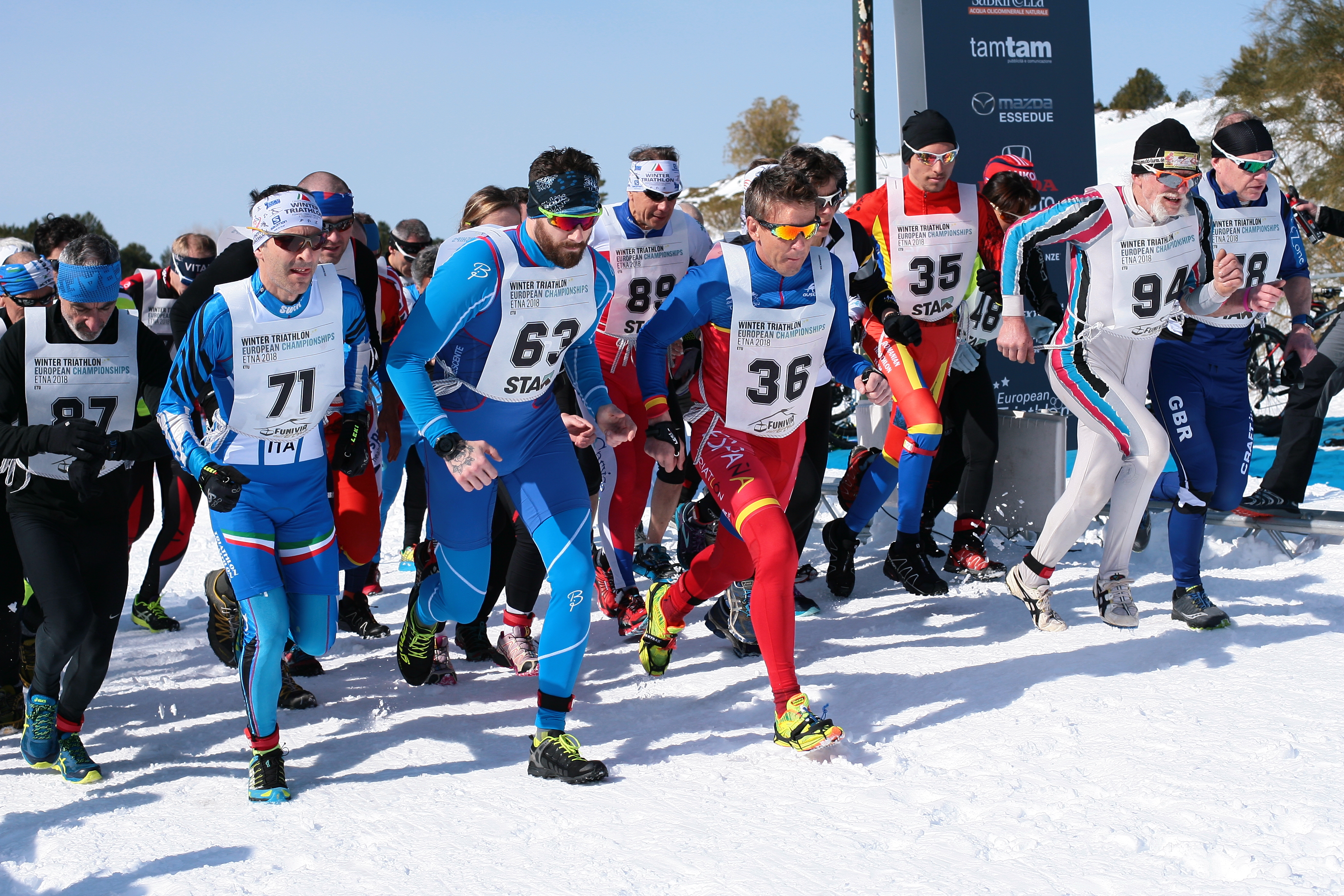 Christopher Gouldsmith GBR looked strong at the front; running with long, easy strides. His military background has given him the chance to show his skills on two skis and having placed 5th in Romania, he was here to improve not only on that result but to see how he could fare against Europe’s best. 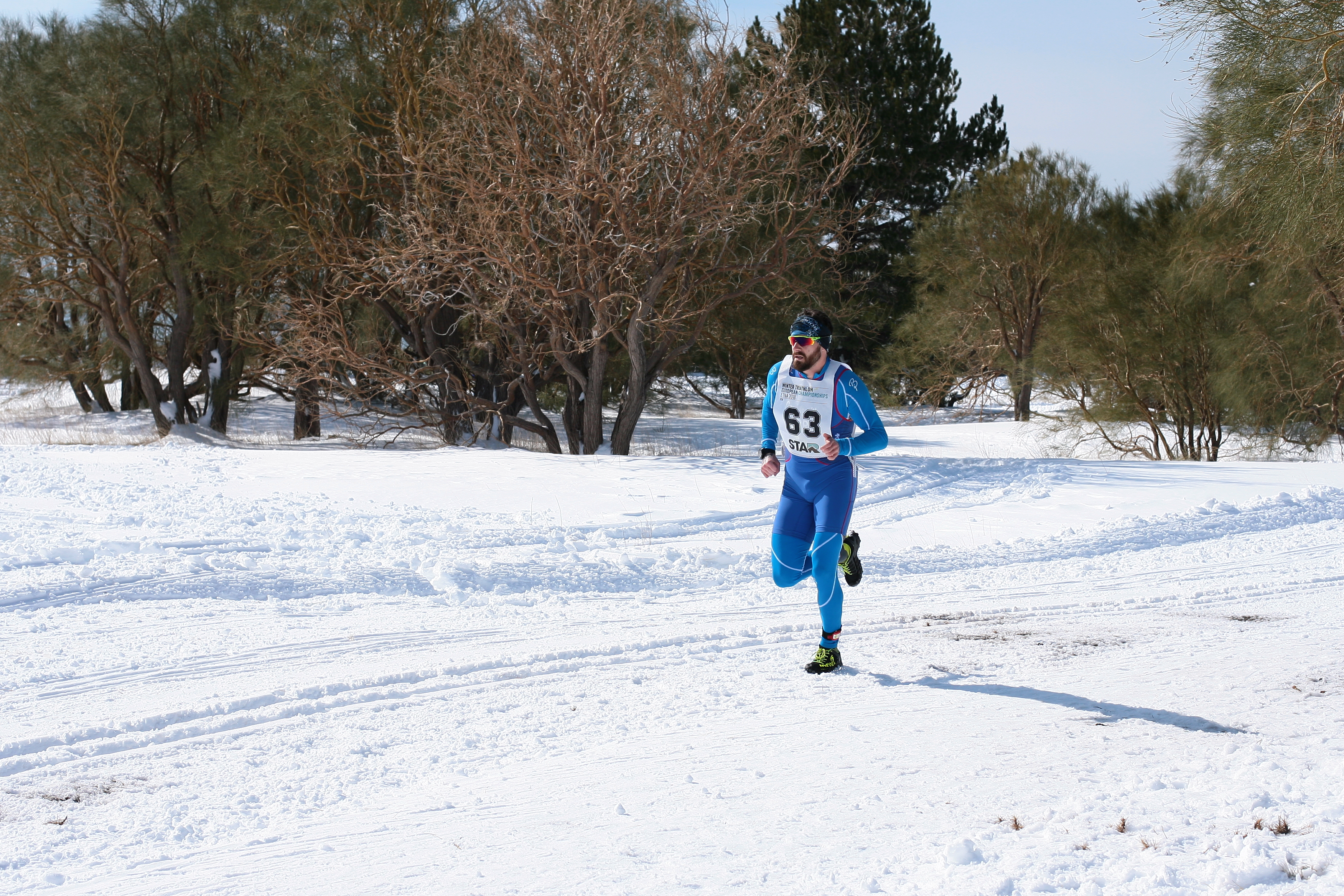 He came to the event in a positive frame of mind; Romania was, “… my first major event and I am very pleased with my 5th position. I’ve learnt a lot from this experience from what works and what doesn’t, meeting some amazing and interesting people along the way. Thank you. Bring on the future.” 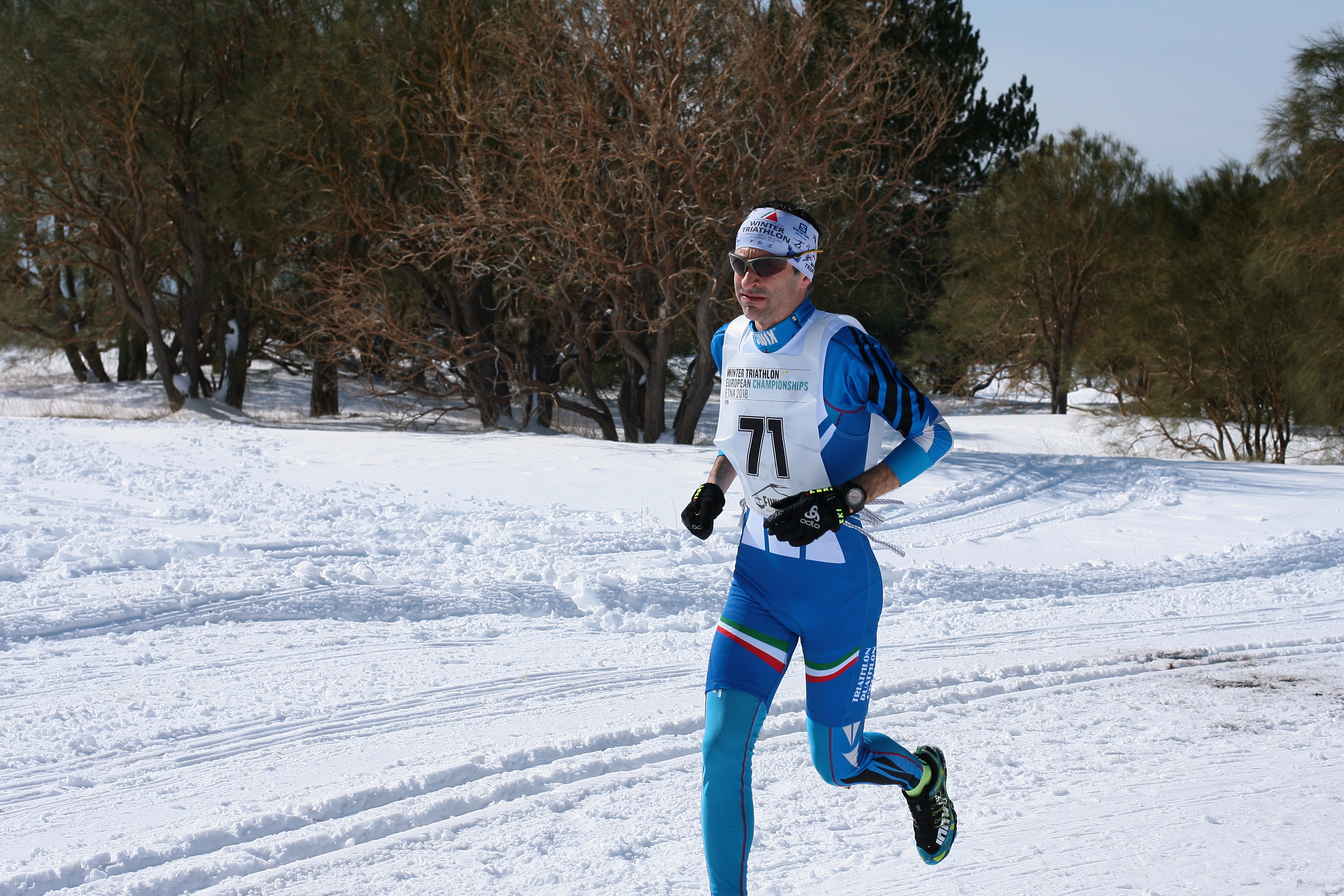 Just behind him came Guido Ricca ITA. With very vocal support from his family and with the 2006 European and 2013 World title behind him, it looked like a battle between three age-group categories.

On his heels came Max Zdouc AUT His daughter, a talented biathlete, was racing on the other side of the world at the Winter Olympics. Zdouc was the 2009, 2013, 2014 and 2016 World Champion and had last held the European title in 2012. Also racing on the off-road circuit, his biking skills would later play an important role in the race.

These three athletes built up a clear lead over the chasing group, led by another Italian athlete, Luca Alladio, the 2016 World Champion and organiser of the Worlds in Cogne in 2013 and 2014. He was having a real battle with Britain’s Ian Anderson also with a strong military background and with proven ski power.

Amongst the women, it was Italian athletes Elena Garagnani and Stefania Valsecchi, both racing in the same category, who led the race. Sadly, Valsecchi had to pull out of the race, leaving Garagnani, 2014 World Champion, to battle with Germany’s Claudia Bregulla-Linke who, with two World Titles and the reigning European Champion, knew exactly how to pace the race. 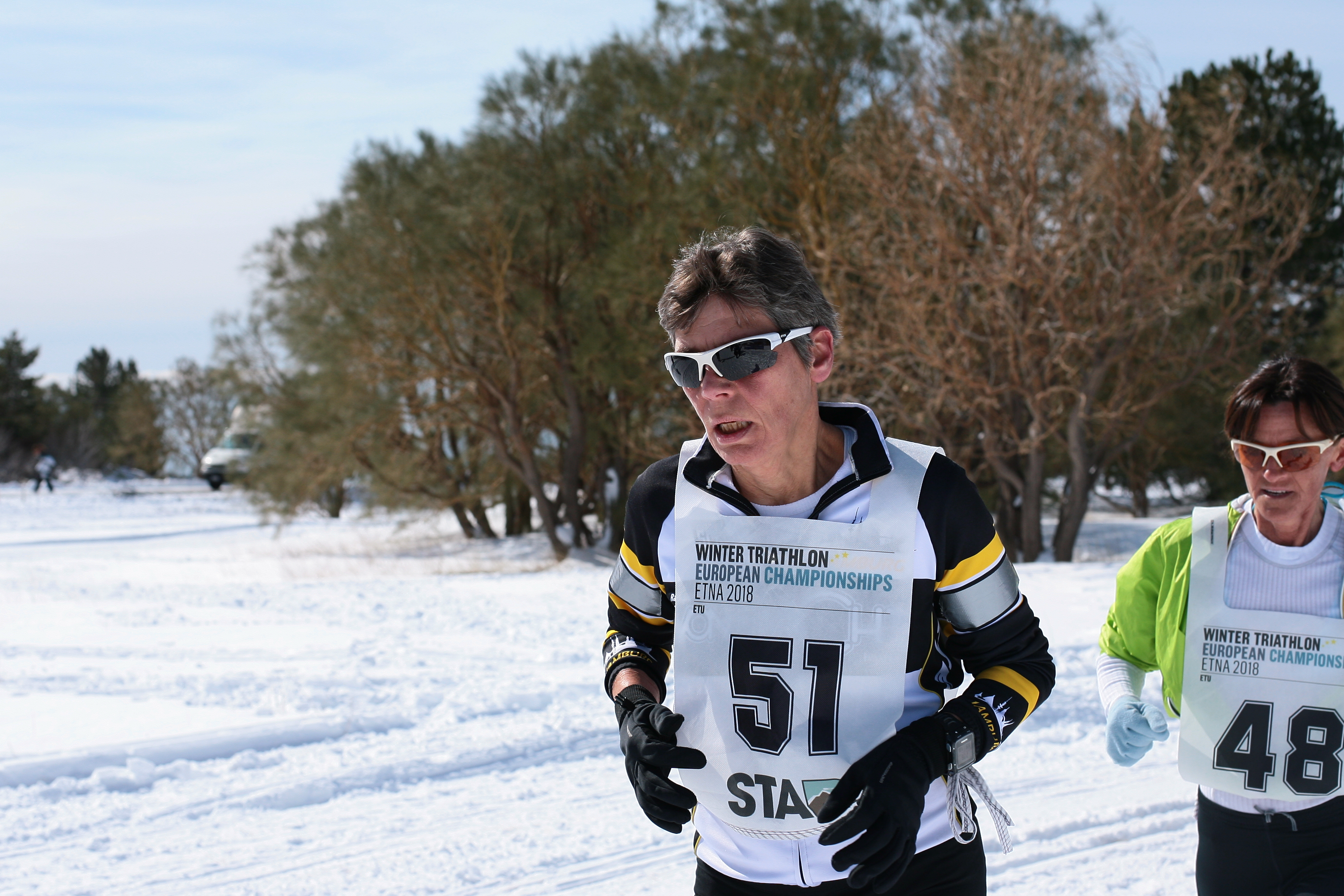 For the men, it was Ricca who sped through T1 and was soon out on the very tough bike course. With some sections on the road, there was a chance to speed up, or get your breath back but the off road sections, with the icy crust breaking up, ensured it was a maximum heart-rate experience for most.

The athletes were now well spread out around the course and, with ETU Age Group racing being such an intense competition, there were challenges all around the course between athletes in the same category. Those European Titles are wonderful thing to own but you can only get one if you are good; if you are amongst the best in Europe. Our oldest competitor, Reinhold Wolter was making Italy’s younger athlete Giovanni Pardini work hard out on the course and they were showing everyone that, born in 1936 and 1947 respectively, that age is no barrier to racing.

It was on the bike course that Ricca took full command of the race. He pulled away from both Gouldsmith and Zdouc and with his powerful skiing to come in the final segment, Italy looked strong to win not only the category but also the overall men’s race.

Alladio moved up through the field but could not catch Zdouc. Further back, Spain’s Miguel Espina Vázquez racing in the youngest category, was having a nightmare. His bike and skis had not arrived and were stuck in a plane somewhere and so, with a borrowed bike and unsuitable skis, he knew that it would be a tough day at the office. His struggle was noted by everyone and the encouragement for this determined athlete was heart-felt and supported him right to the end of the race. 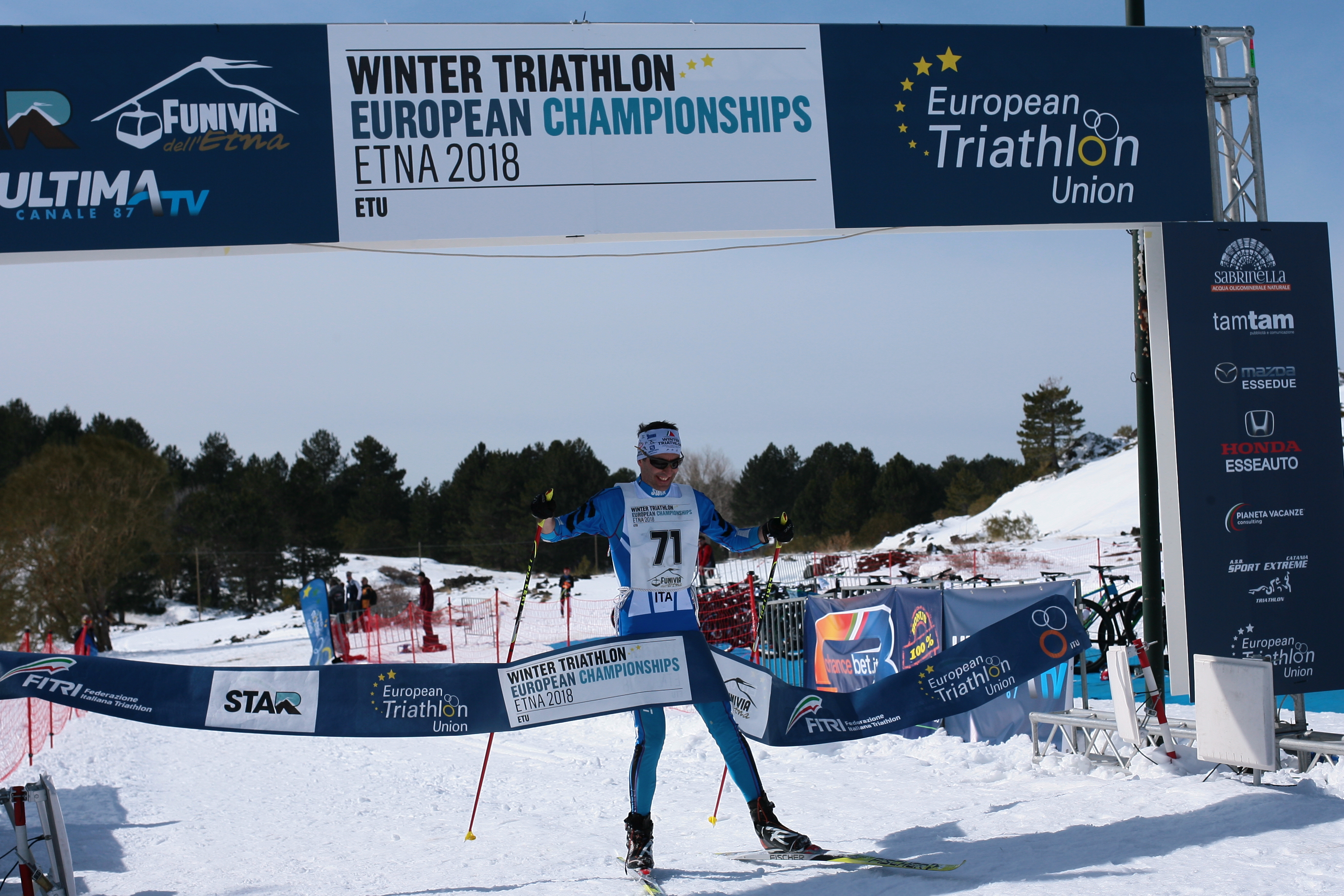 Ricca had done enough on the bike to ensure he claimed the title and the race victory. 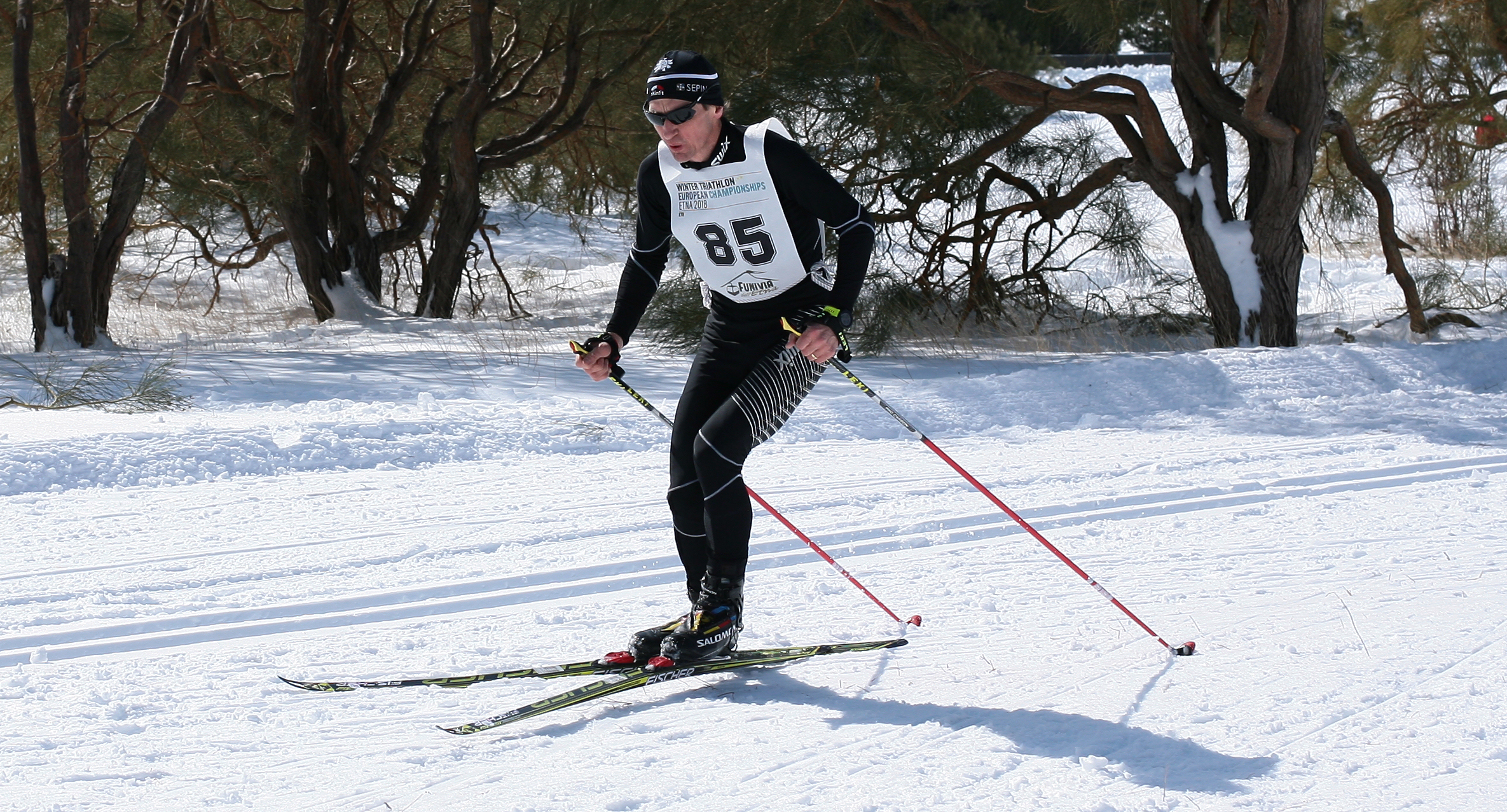 Behind him an impressive performance from Russia’s Andrey Sharygin took him through the field and although he could not match the overall pace of the slightly younger Italian, he was rewarded once again with a silver medal in his age-group. Since 2012 he has been on the podium in 8 of his 9 races. The Russian supporters, including their newly-crowned European Champions, cheered him all the way to the finish.

So Italy took the overall honours for the men, but in the women’s race, the early powerful run from Garagnani had been smashed by Bregulla whose bike split had sent her way out in to the lead. Boczek too was strong on the bike and had made up time. 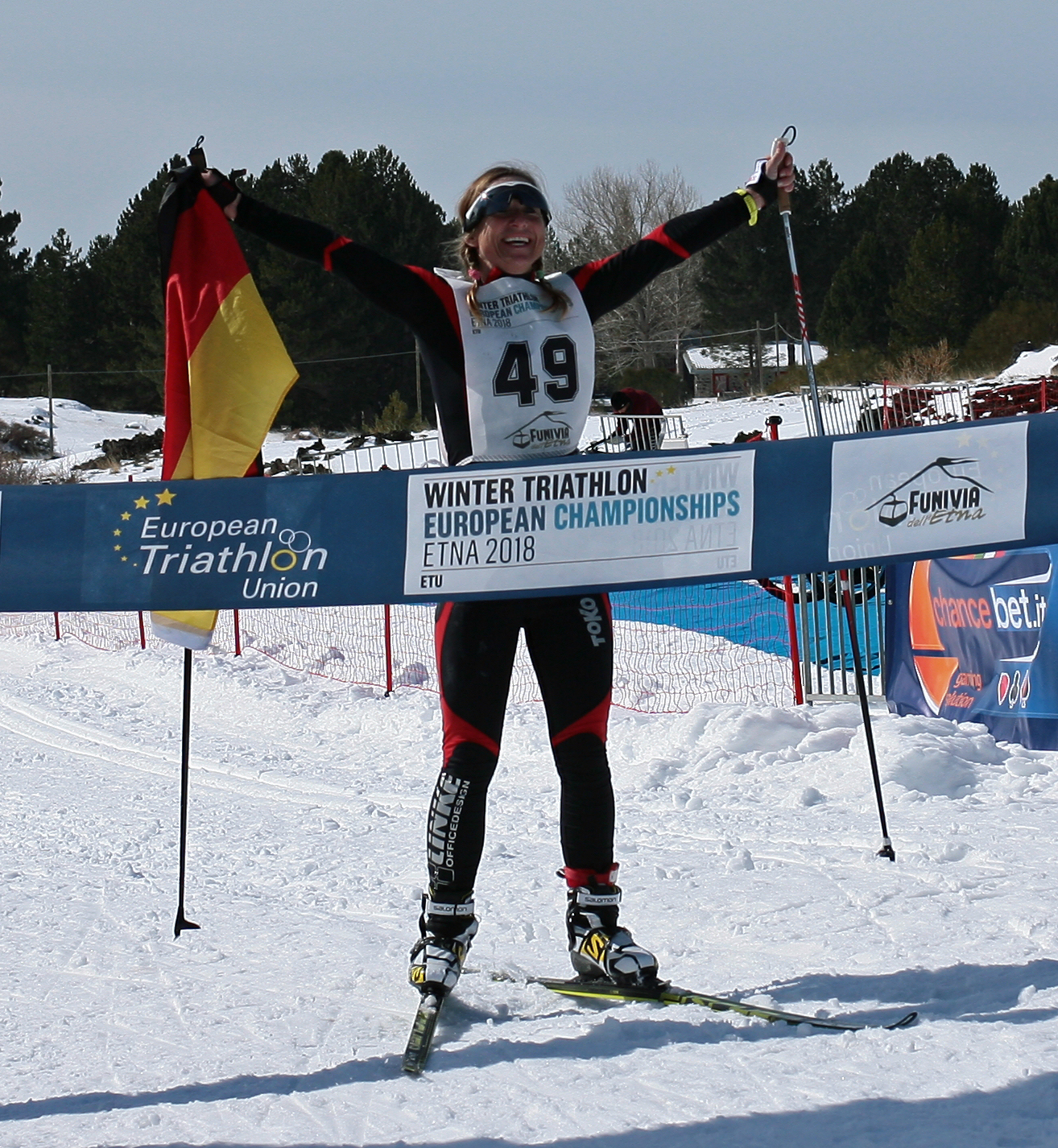 With the final leg on the skis, it was Bregulla who posted the best time and had time to enjoy that moment of glory and the finish tape was hers to hold with the biggest smile of the day.

The men’s categories 45-60 proved to be the most competitive and strongest. The first 8 medals were shared between Italy, Austria, Russia, Czech Republic and Romania

Next over the line, claiming Gold, came Simon Hedley GBR, whose biking power had been seen before in Transylvania.

His ITU bronze medal prepared him well and for him, “A cracking weekend had in Sicily for the ETU Winter Triathlon Champs, Mt Etna. It’s been a long time coming, but I’ve finally got a Gold medal, and now I can say I am European Age Group Champion.”

Ian Anderson came home in 10th place overall to take silver in his age group, losing out to Gianni Sartori ITA. The Italian’s power on the bike had taken him to gold but the 7th fastest ski split of the day for Anderson was the fastest of the day for the Brits. 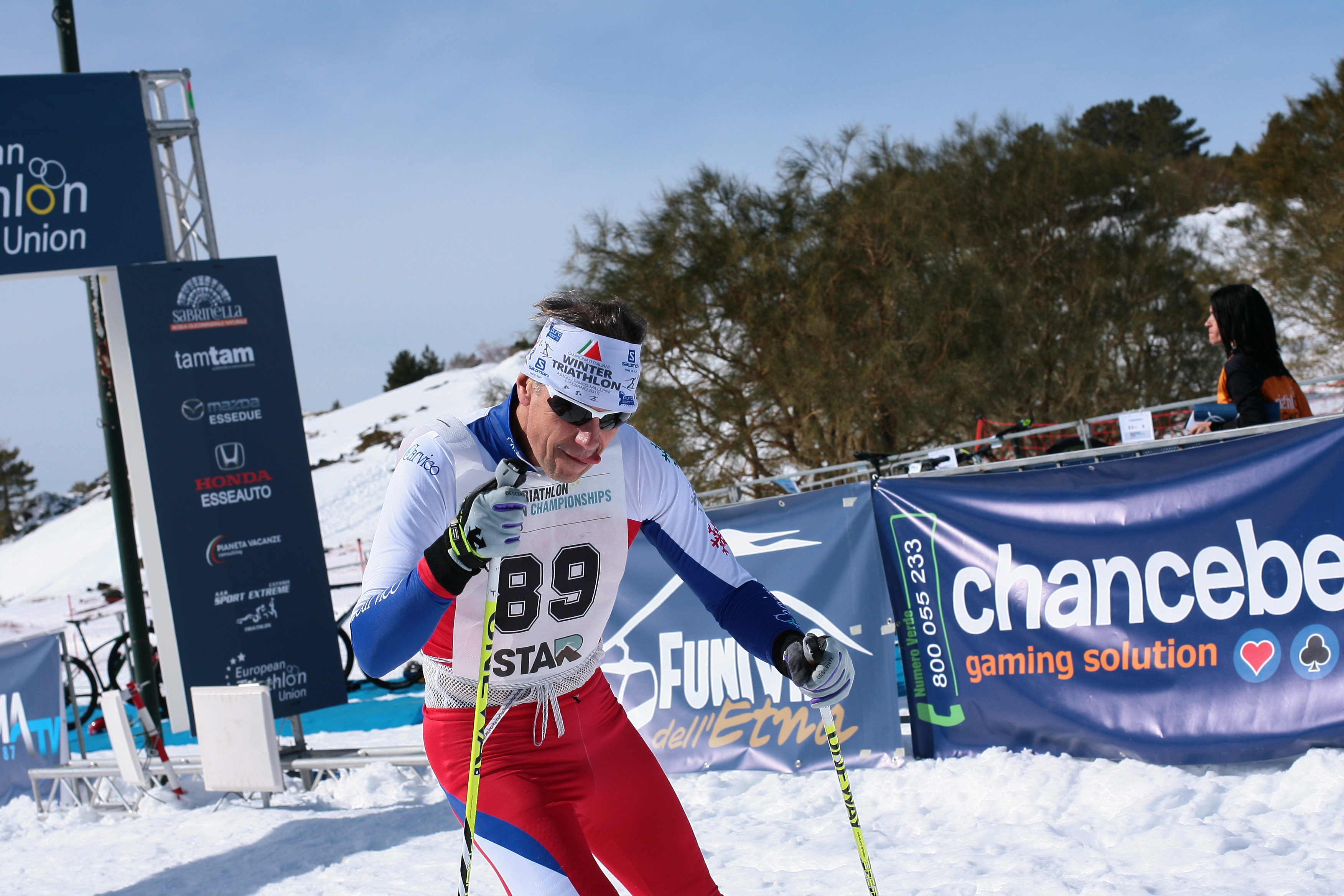 Aldo Nobili ITA was first home in the Men’s 60-64 category. Outpaced on the run and bike by Team GB’s Nicholas Farnell, his power on the skis was too much and Farnell had to settle for silver but with his winter triathlon podium, he can go home proud, having improved significantly over his 7th place in Otepää last year.

The final finisher welcomed over the line and it was a chance for the Technical Officials, who had a really busy day making sure each and every athlete ran, biked and skied the correct number of laps. Not something that is done at every race, but under the guidance of Enrique Quesada, the TO Team manually checked each lap. Their proactive work in Transition also helped avoid any penalties for athletes trying to start the ski segment with their bike helmet on. 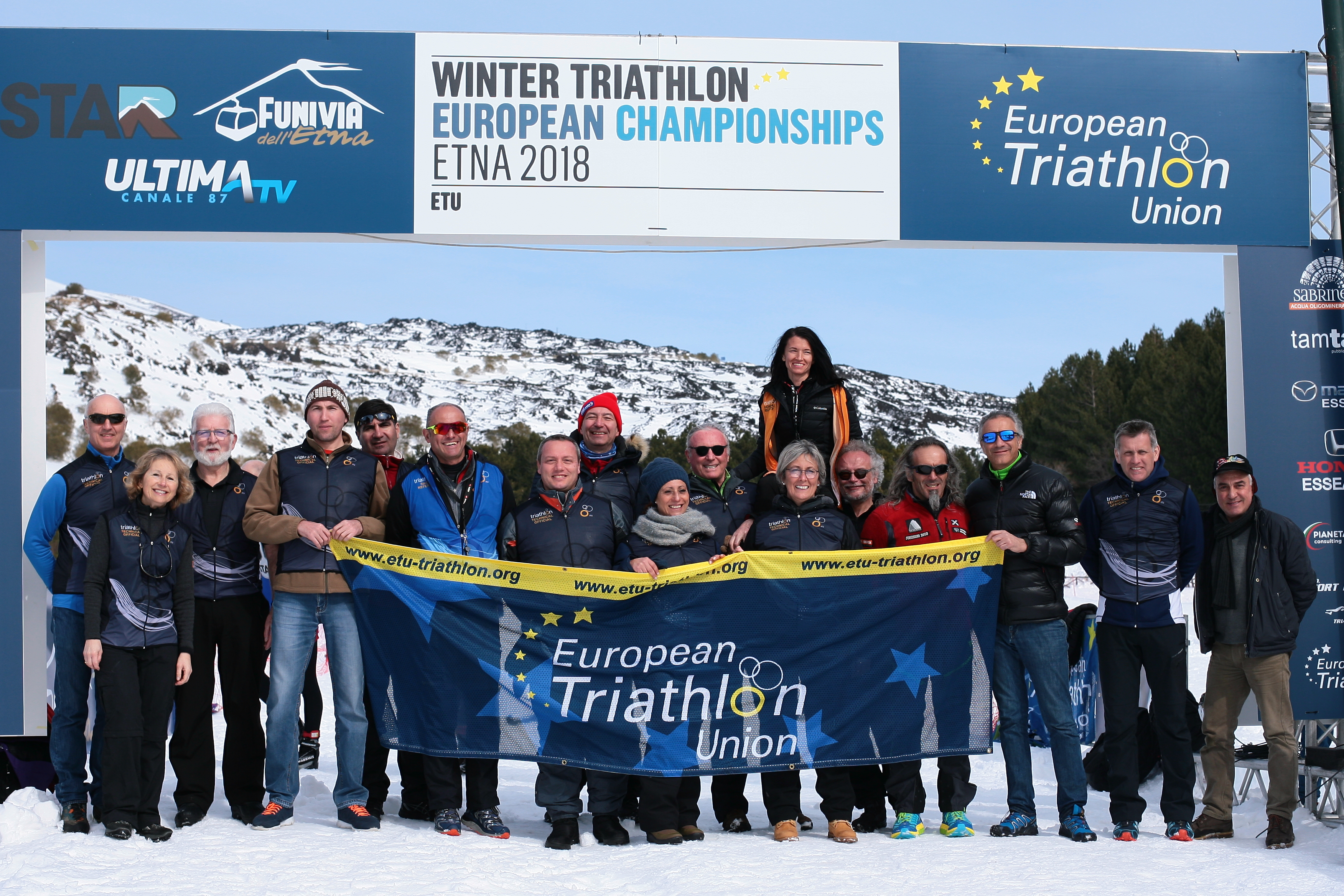 A great team, made up of officials from Russia, Romania, Netherlands, Ireland, Great Britain and Italy, their moment of delight at the end of the race was one to enjoy.

So the final medal tally was a surprise for many, with Great Britain doubling their medal haul from 2017. In fact all six of the Brits went home with a medal, including Ian Howard, BTF President and ITU Executive Board member. Despite breaking a ski pole and watching so many pass him, he dug deep to claim a bronze. Credit goes to Keith Jenns as the GB Team manager. He has pretty much single-handedly motivated a small but dedicated team of Brits and the rewards are now being seen.

The German Team has one couple to thank. Between them, Marianne and Hans Peter Grünebach have created a team of off-road and winter enthusiasts that have enthusiastically supported ETU events over the years. Topping the medal table with their golden haul, they were unable to win as many medals as our hosts, whose 9 medals represents the biggest collection.

Check out all the results here.