After a busy and exciting Saturday in Dnipro, it was the turn of the Juniors to race on the Sunday. This race had been selected by ETU for a development opportunity for junior athletes and, with the course design, it offered a complete package. The bike and run courses do not cross over and so there is no danger of the “first runner, last biker” scenario; really important as this design allows athletes who are not so strong on the bike but who might be strong runners, to finish the race and for their race data to be analysed.

A look at the start list and you might be forgiven for thinking it was the Israeli National Championships. A massive team of athletes made their way here and it was to prove a good move for the National federation, who have targetted this race as a qualifier for the European Championships.

In the women’s race, it was race favourite, Slovenia’s Tjaša Vrtačič who claimed the win. Behind her and all the way to 12th place (apart from one Russian athlete) it was an Israeli athlete who scored the points. Silver went to Raz Poradosu and bronze to Shira Katz.

For the men, it was also an opportunity for the Israeli team to show their strength and claiming the top 4 places, it was a clean medal sweep for them. Gold went to Itamar Eshed, silver to Itamar Shevach Levanon and bronze to Raz Haim.

Let’s have a look at how the races went. 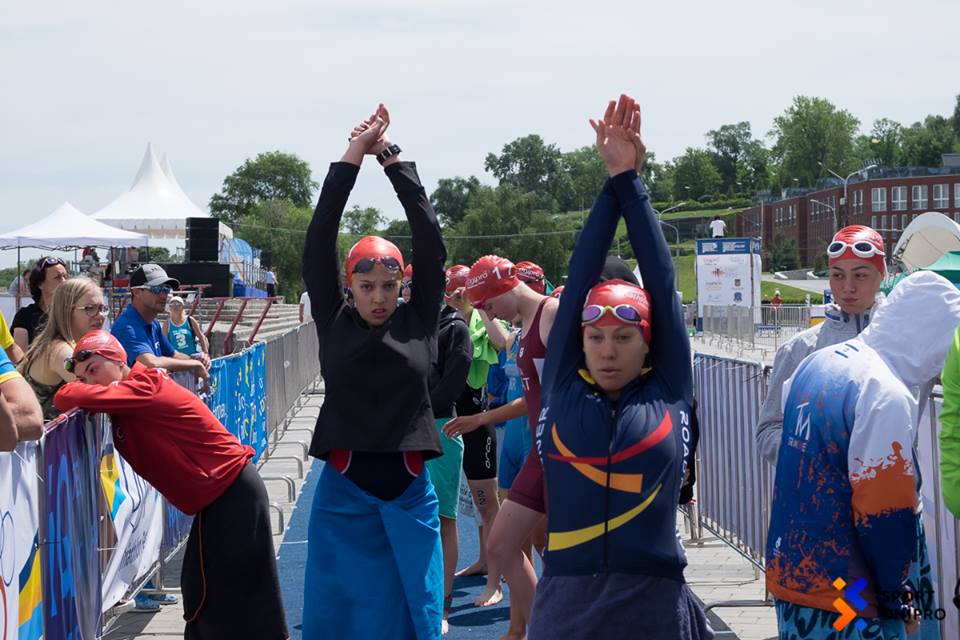 The conditions for racing were similar to those on Saturday. Sunny and clear skies, a little more wind than for the Elite and clearly the coaches had been explaining to the young athletes how to take advantage of the river’s currents. 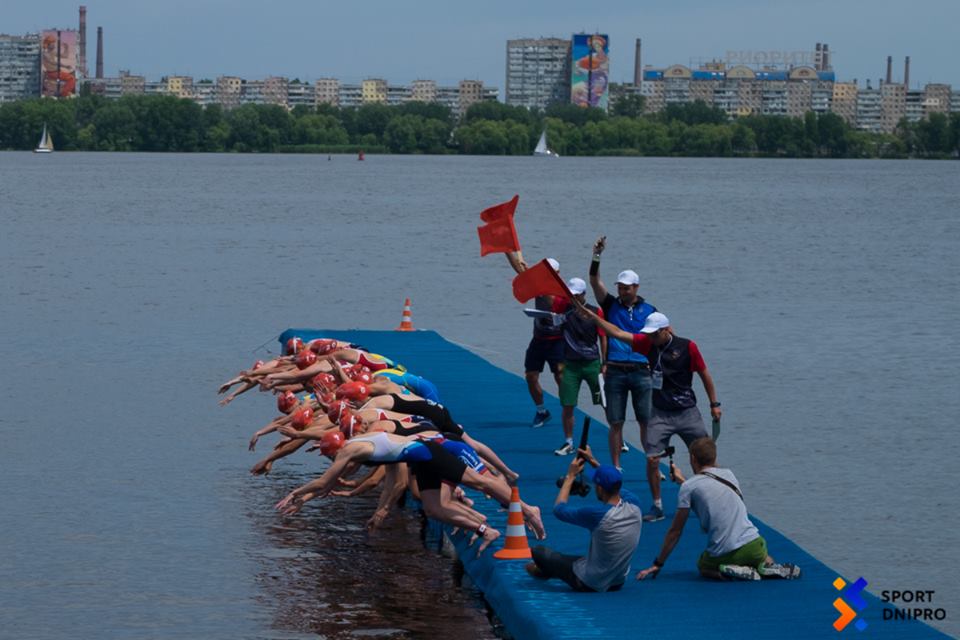 A clean start saw the athletes hit the dark waters of the Dnipro and it was not those swimmers nearest the bank who took the initial lead but those in the centre. Soon enough the lead was established and at the first turn, it was Poradosu, with long, deep strokes, who led the pack.

Vrtačič soon found the leader and latched on to her feet, taking the draft advantage. Katz, Gorkem Sila Korkmaz TUR and Alevtina Stetsenko RUS, were close by.

These five had established a breakaway by the time they turned into the fast current bringing them back to the pontoon and they took full advantage of the acceleration. For the Russian, this pace was just a little too much and she dropped off the back of the group before the final turn to the swim exit. 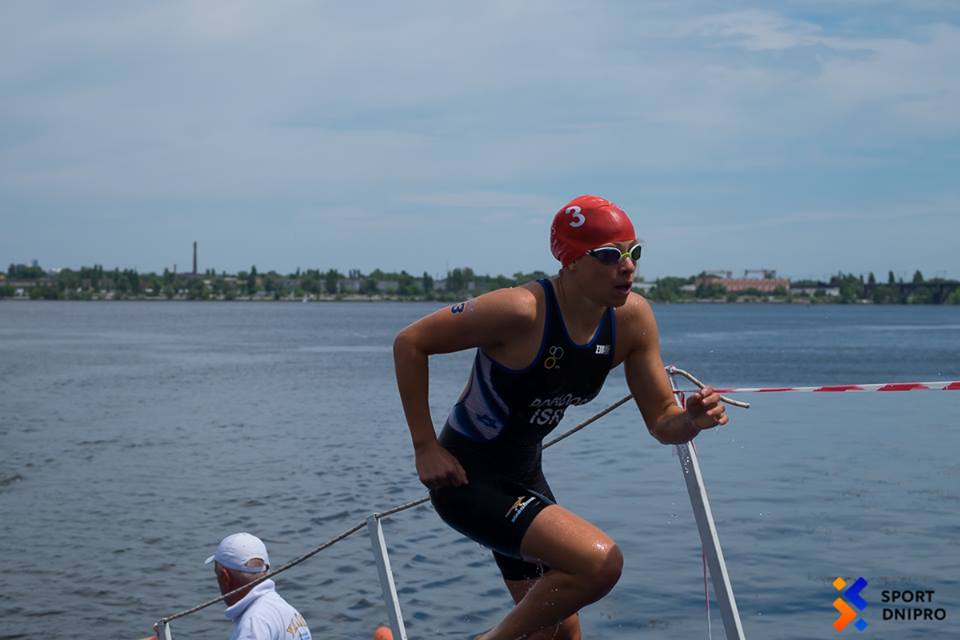 It was Poradosu and Katz who grabbed the exit first but Vrtačič had the pace to join them in T1 and was first out on the bike, leaving the Turkish athlete to play catch-up.

The leading three athletes stayed close to each other and as the first of the three big climbs arrived, they took full advantage of the lead they had created by powering up the hill and then forcing the pace on the descent. 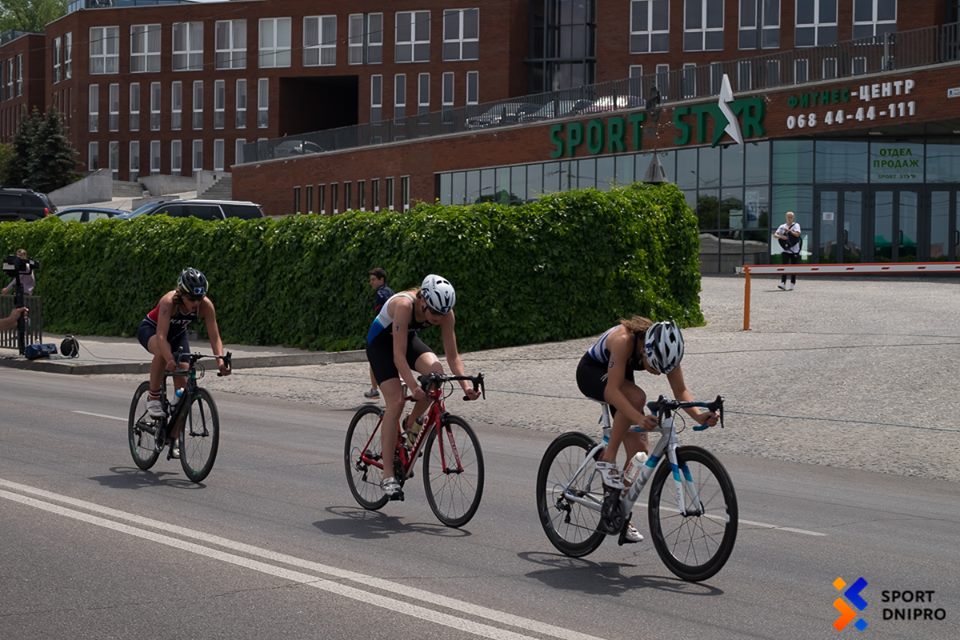 Behind them, there was little the chasing athletes could do as the Israeli / Slovenian machine ate into the three-lap bike course.

A 40 second lead over Stetsenko and Hagar Cohen Kalif at the end of the first lap made it look pretty likely that the medals would be shared between Slovenia and Israel. 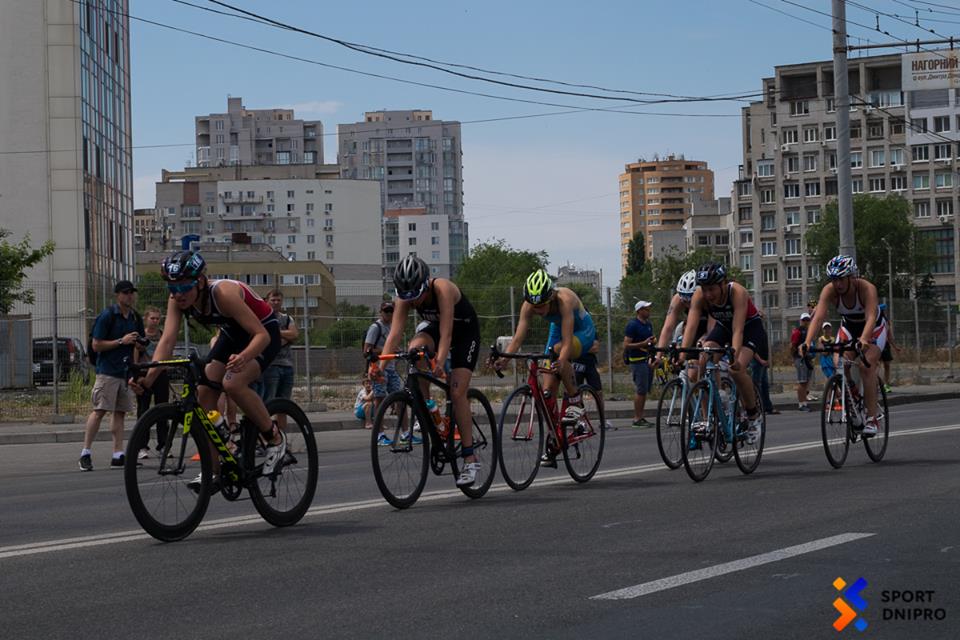 The chasing pair were still ahead of a small peloton of six. As they were over 80 seconds behind the leaders, Poradosu, Katz and Vrtačič looked pretty safe. 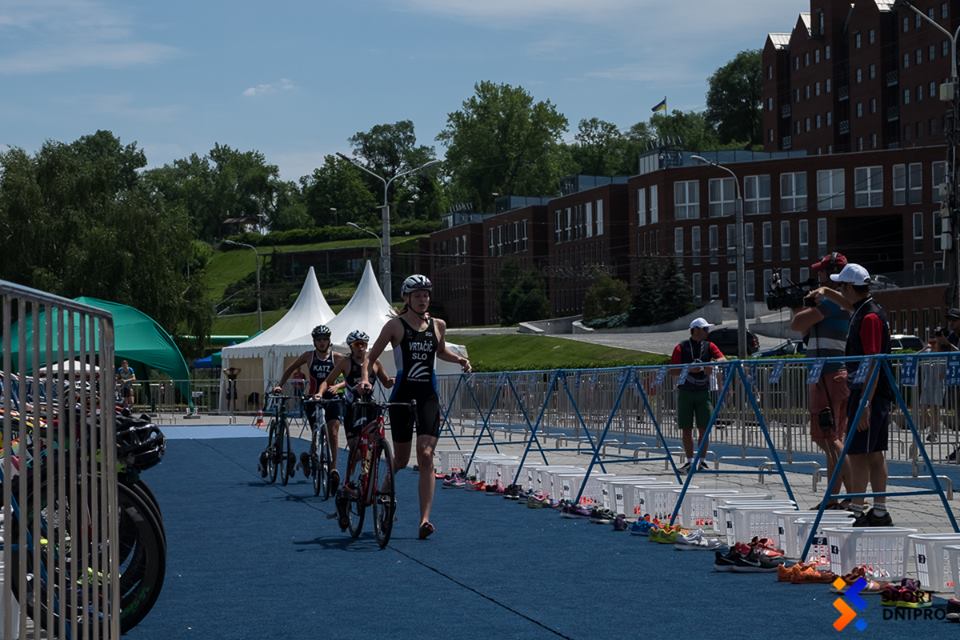 They raced into T2 and it was Slovenia who led out with a lead of a couple of metres that gradually extended. Behind them Stetsenko arrived with the group and sped out onto the run, with the leaders in sight but a long way ahead.

Vrtačič began to suffer and it was Poradosu who took immediate advantage, leading them back towards the finish area at the end of the first lap. The Slovenian athlete was able to gauge how hard she would have to work to stay on the podium as they passed the chasing athletes and she would see the easy running style of Stetsenko as the main threat.

Having fought through a bad patch, Vrtačič found fresh legs and joined Poradosu, dropping Katz. The tables were turned now and with one lap left, it was Slovenia and Israel neck and neck and Stetsenko some distant way back but running fast.

It became a cat and mouse battle at the front, with the smaller Poradosu edging ahead and Vrtačič on her shoulder, poised and ready to pounce.

With 400m to go it was impossible to say who would win. The athletes were side by side but then Vrtačič kicked and in just a few strides had dropped Poradosu. 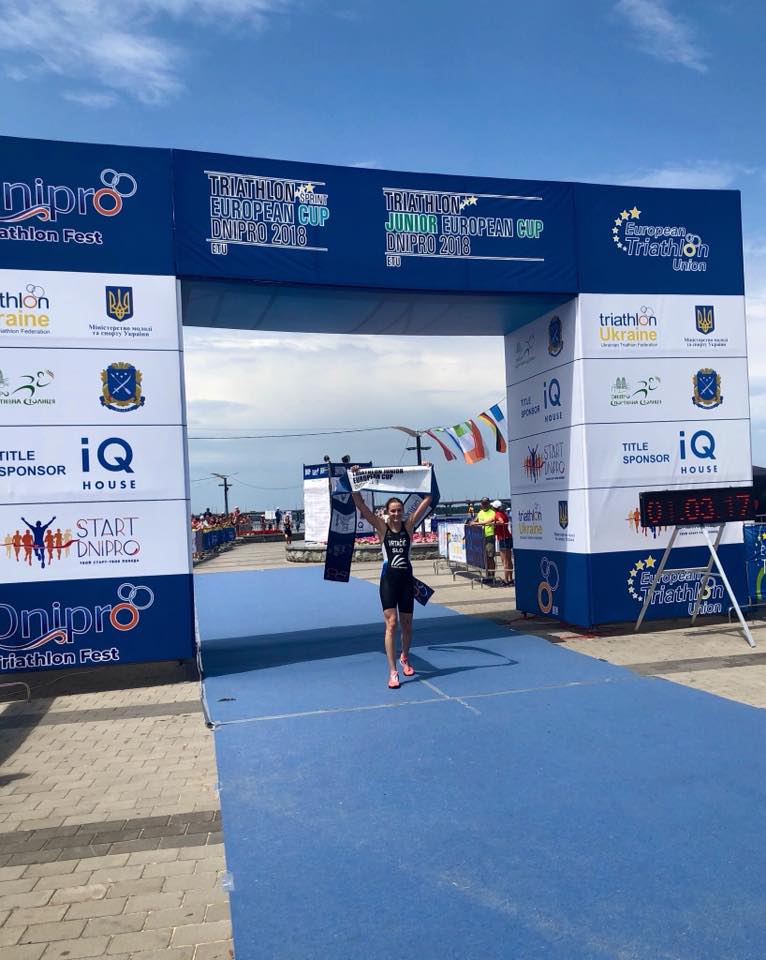 Taking the finish tape and holding it high, her delight was obvious. Her first podium and her first gold. Katz came home for bronze, making the podium and Stetsenko, with the fastest run of the day, just ran out of run course to take 4th. 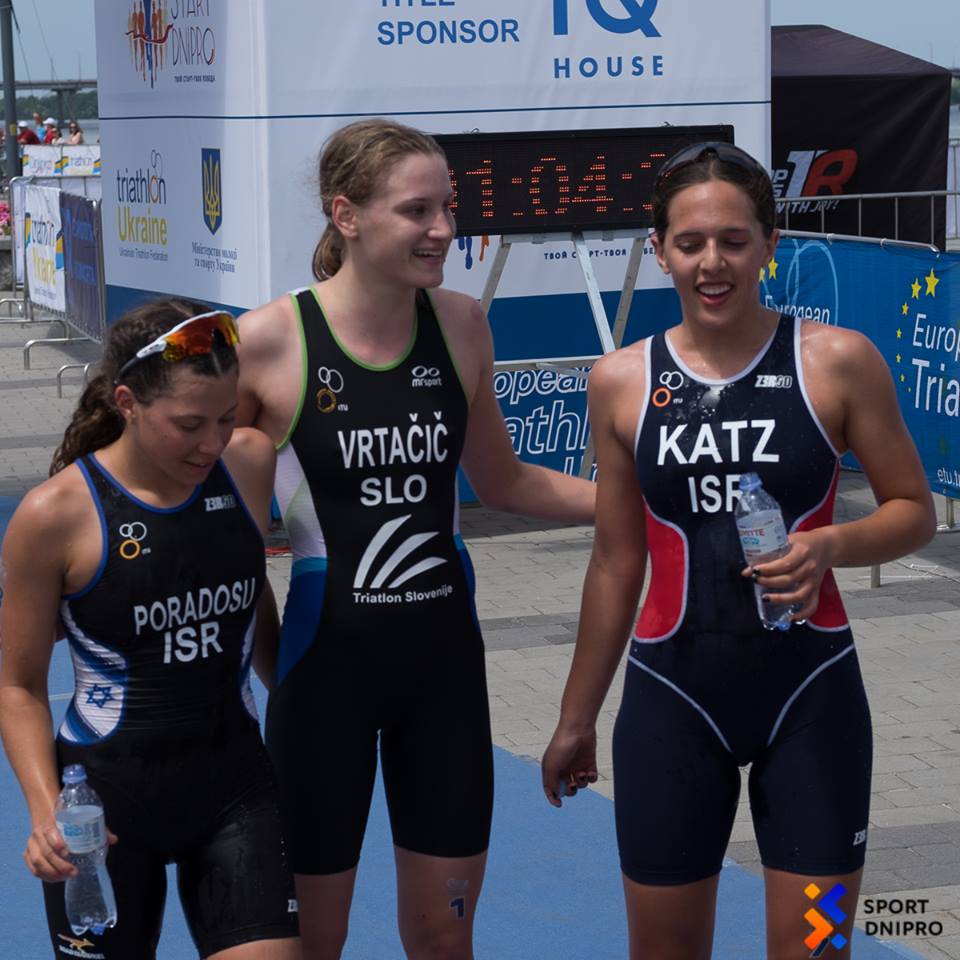 Still buzzing with delight after the race, she said, “I am extremely happy for my first victory at the European cup in Dnipro in Ukraine. Despite our journey, when we actually caught a plane in the last minute and I had a cold, I was able to concentrate on my performance today and I managed to beat everyone. We were swimming in the river and I was on my bike in the leading group together with two girls from Israel. The bike course was quite demanding, as it had a long slope. We went out on a run together, but at first I lost a little ground but then I was able to catch up with them. I am happy to win and show good form, especially because I have been chosen by my federation to race at the Mediterranean Games in Spain. Thank you all for believing in me and supporting me one way or another.” 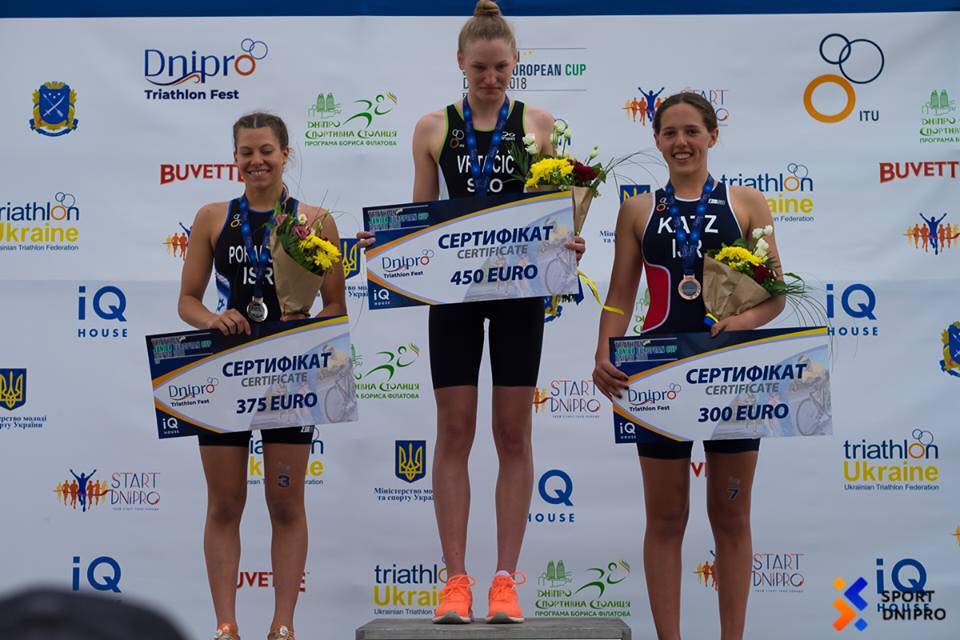 For the Junior Men, over 60 athletes weighed down the pontoon and gave the crowds watching the event an extra moment of tension as the pontoon heaved backwards after the start signal. 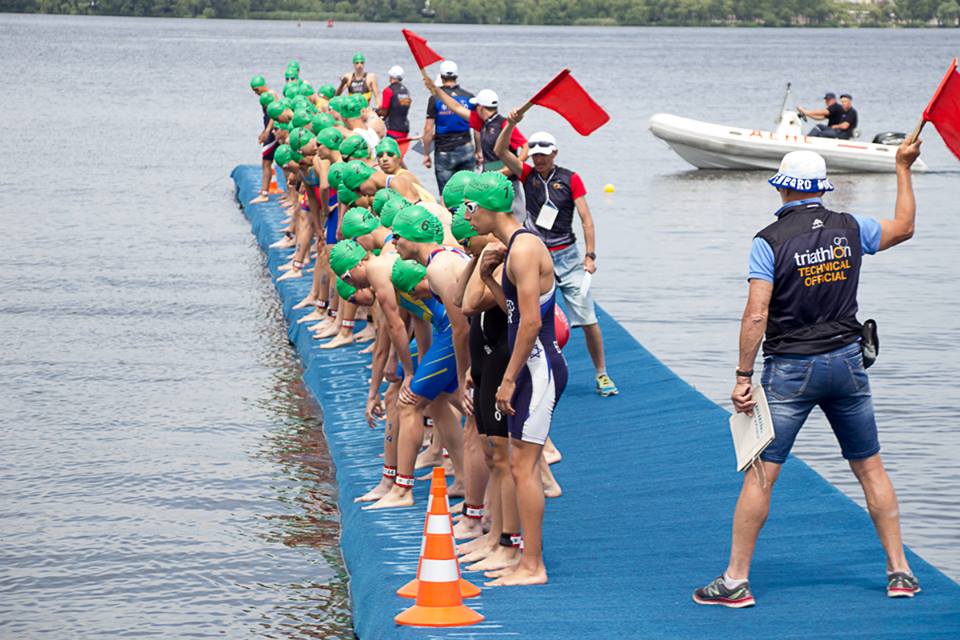 A very strong team from Israel filled the positions from the river bank outwards and once again, there were athletes choosing the very far end of the pontoon; more current but perhaps a clear run to the first buoy. 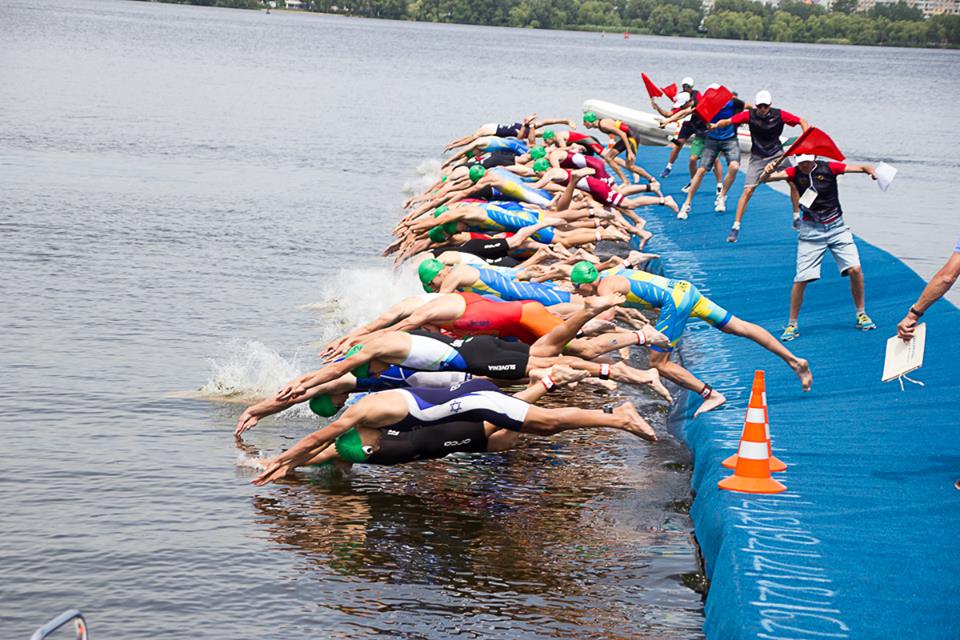 Despite the immense power that kicked back to the pontoon, all Technical Officials remained standing and none had an early bath. A clean start and the waters of the Dnipro turned white as the arms, legs and feet created spectacular turbulence. 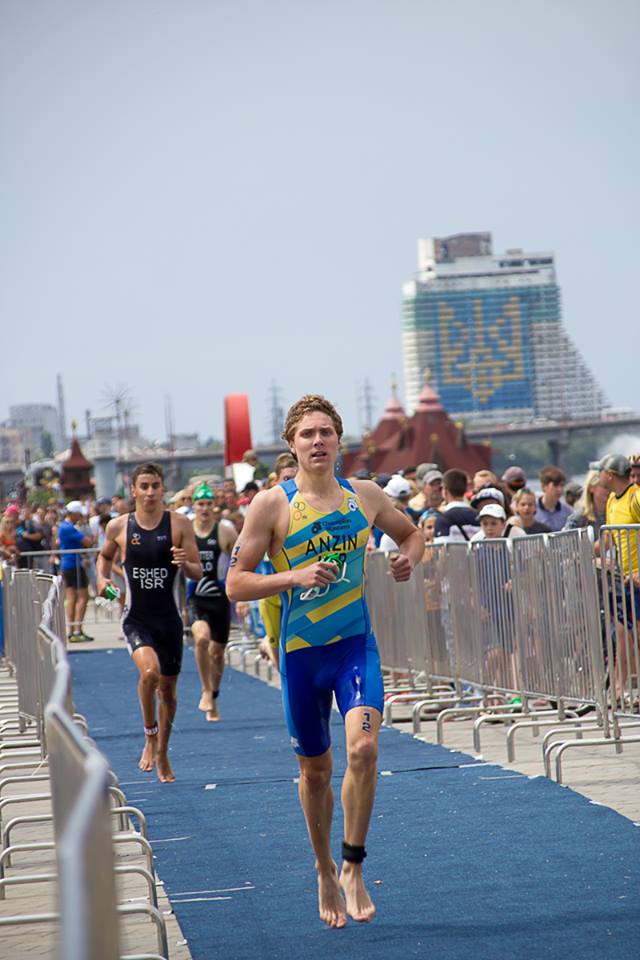 A clear lead was created and as the first turn was negotiated it was Hennadii Anzin who looked strongest, Eshad was close by and a leading group of 5 rounded the second buoy to start the fast return leg, taking full advantage of the current. Anzin’s long and powerful strokes gave him the advantage and rounding the final turn buoy, he had a clear swim to the exit. 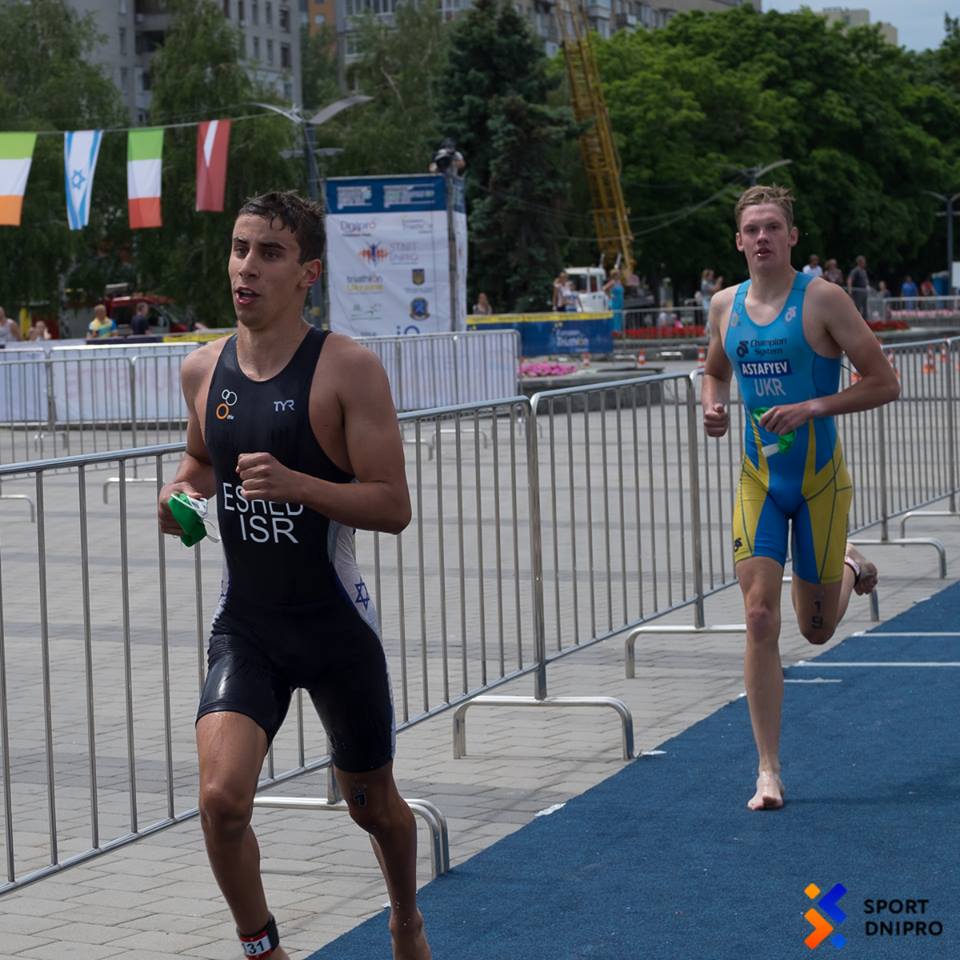 Eshad kept him in sight, with Oleksiy Astafyev UKR, Žiga Hutter and his teammate, Jan Škrjanc putting the Slovenian team in the lead group.

With five athletes working together, we might see a repeat of the Junior Women’s race. It was the two Ukrainian athletes who led them out onto the road. Eshad in the middle and then the two from Slovenia. 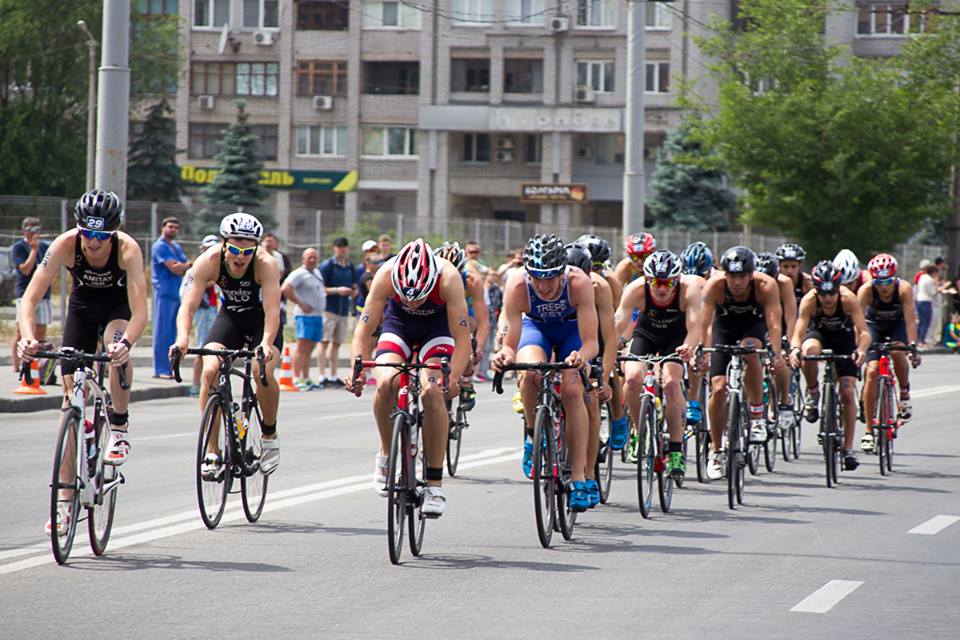 The five worked well together and hit the hill hard, closing up tight for the fast descent. One lap down, they were holding that lead. Behind them a massive peloton had formed. On the out and back sections of the bike course, down by the river, the leaders could see how much of an advantage they had and what they had to do to keep the advantage. 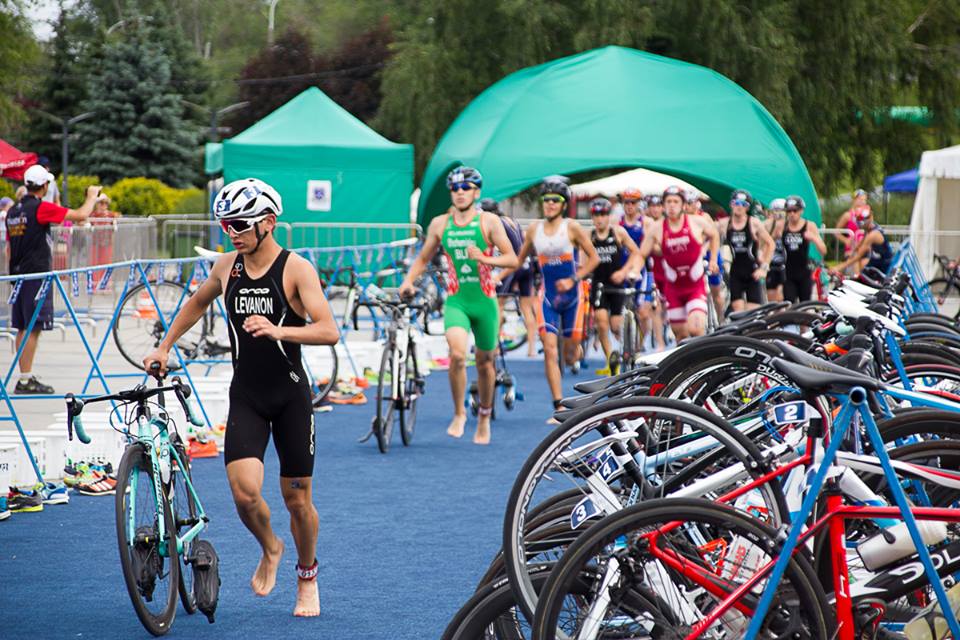 The five worked well and kept that lead to T2. 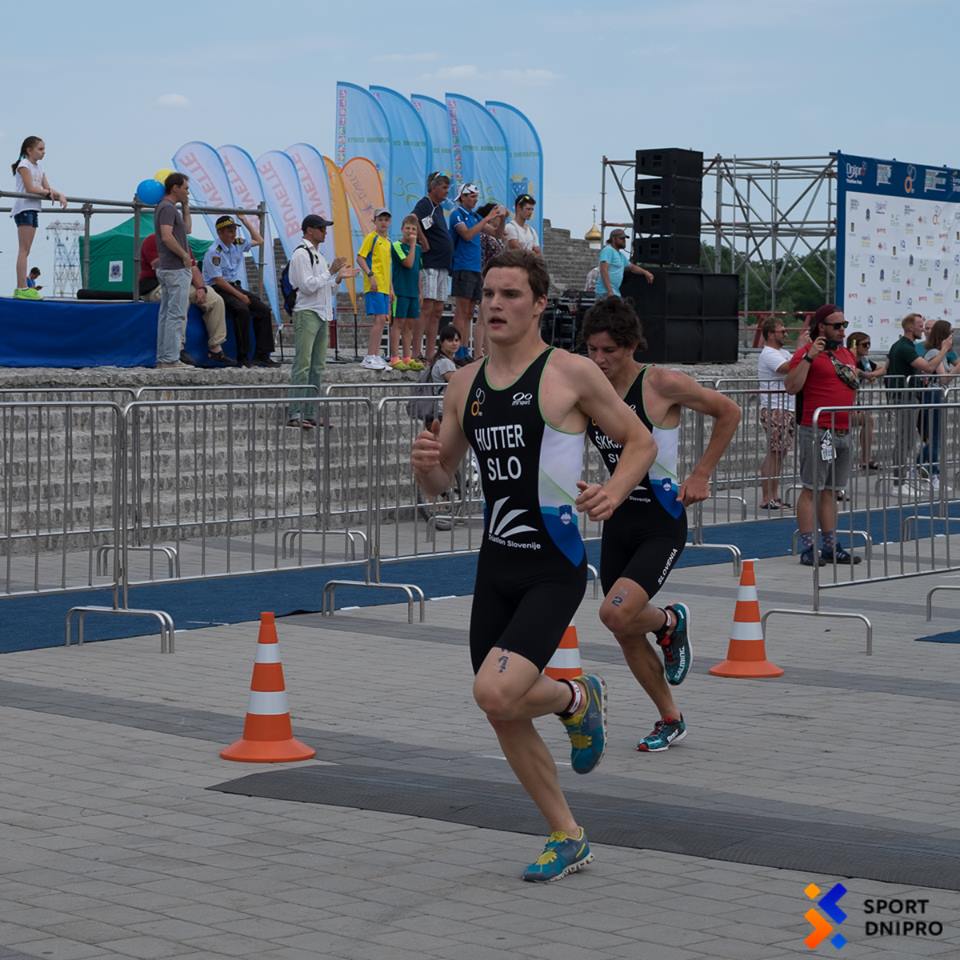 Hutter led them out and within a few strides, Škrjanc was alongside and then ahead but out on the three lap run course, dead flat and with nowhere to hide, it was the stronger runners who picked off the opposition one by one and as the lactate from the biking failed to leave the legs of the Ukrainian athletes they dropped further away from the leader. Eshad looked strong and within 400m had overtaken Hutter. 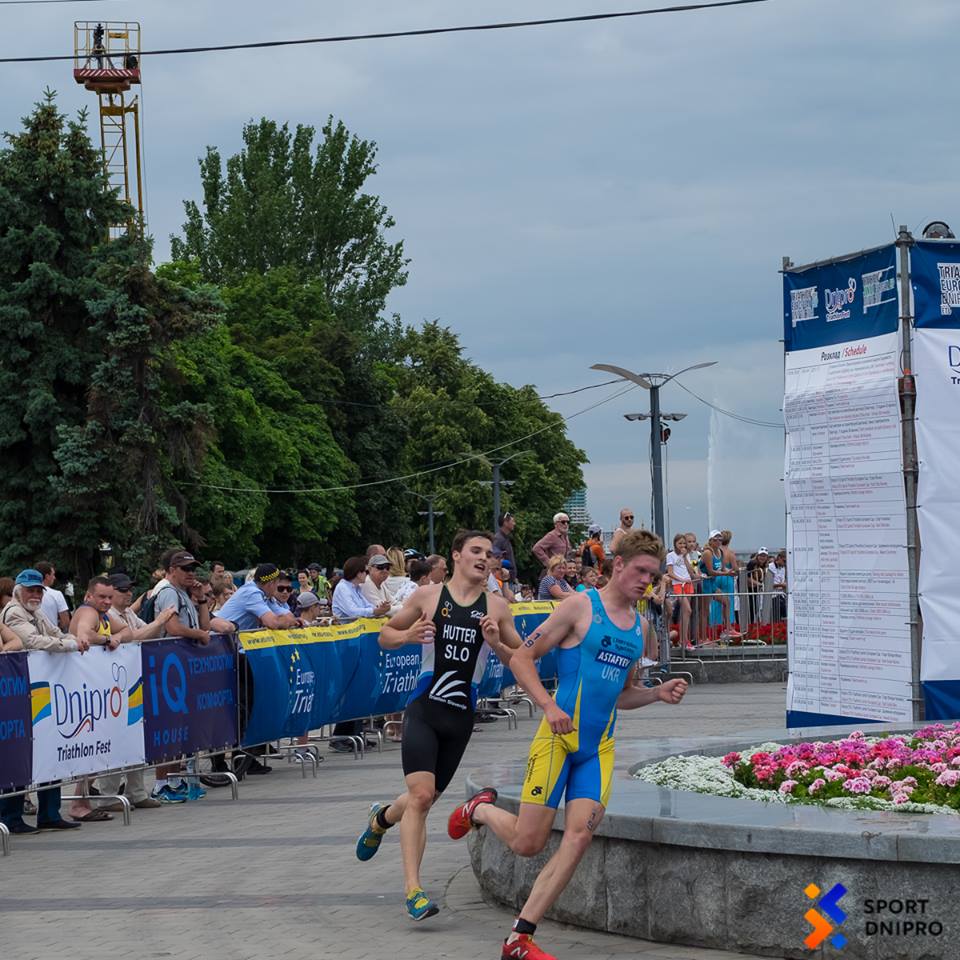 It looked like the battle would be between Hutter and Eshad all the way to the line but nearing the end of the first lap, Eshad went up a gear and closed upon Škrjanc to take the lead. The two Ukrainian athletes were under threat from the chase pack that contained the fast-running Haim and during that second lap the whole race changed for Slovenia.

Eshad flew around the far turn with half the run course completed. He was dropping Škrjanc and pulling away. Behind, Škrjanc was in the sights of the chasing athletes who hunted him down and caught him by the beginning of the bell lap.

Levanon, Elai Izhak Chaski and Haim were now making it look very possible for three Israeli athletes to be on the podium.

Eshad made his final turn, glanced down the promenade, saw where everyone was and knew what he had to do to win. Behind him, three athletes but only two medals now left to collect. 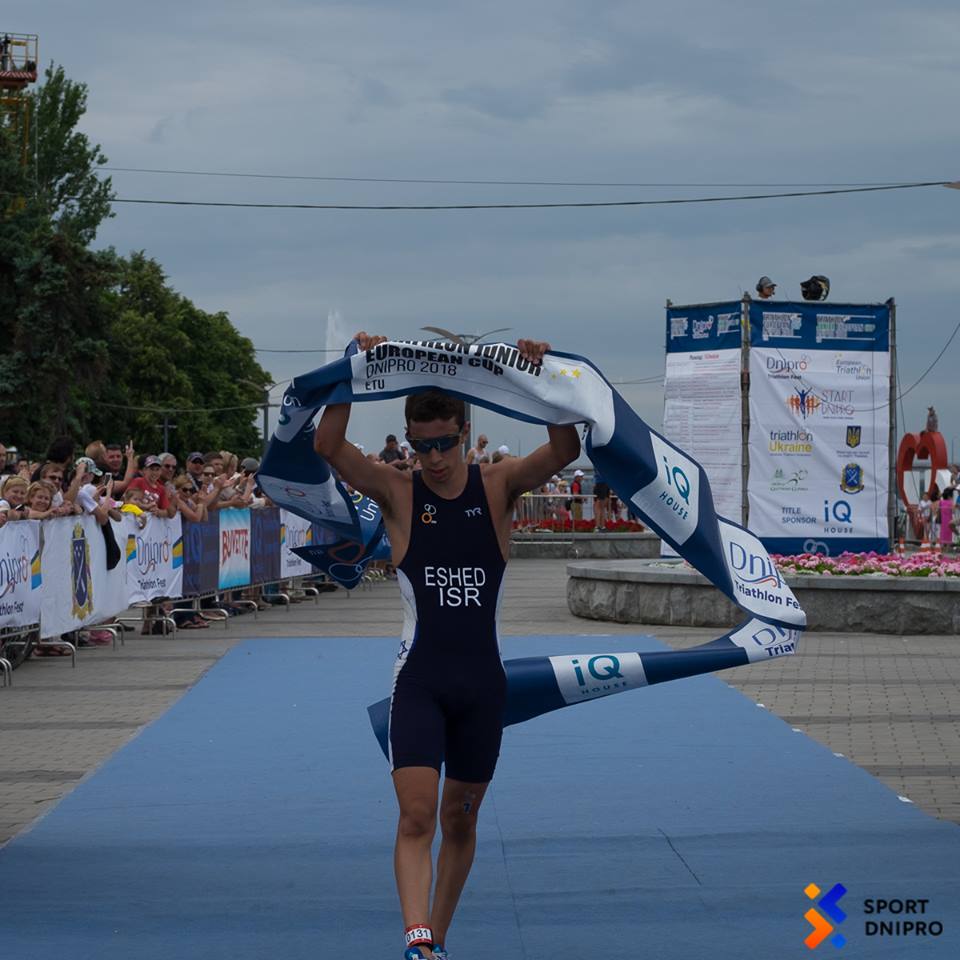 Eshad showed no signs of slowing own to enjoy the moment. 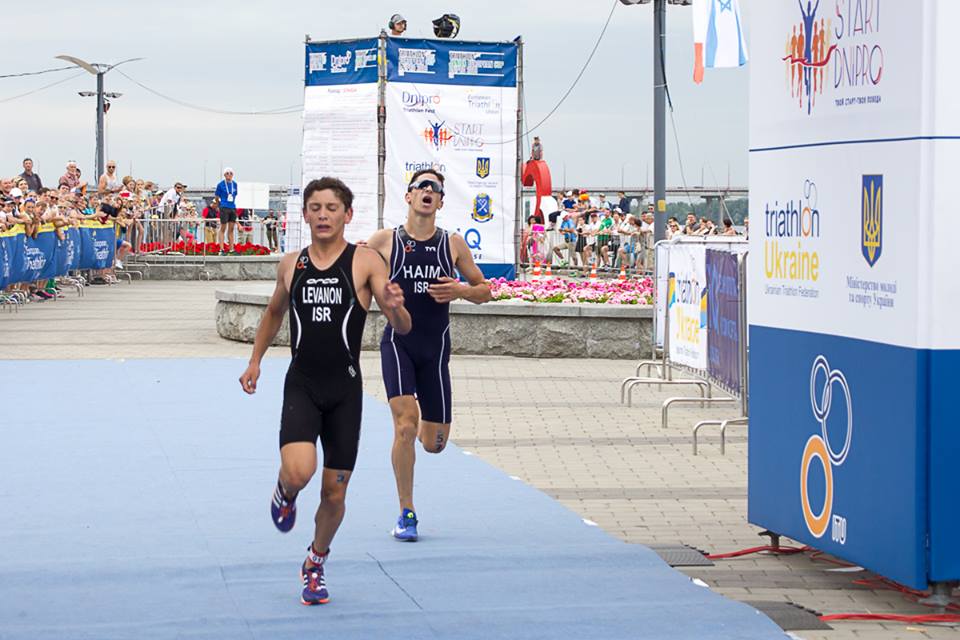 Grabbing the finish tape, he glanced behind to see the sprint for silver that was won by Levanon. Along with Haim in bronze, the Israeli team had done it; a clean sweep of the medals. 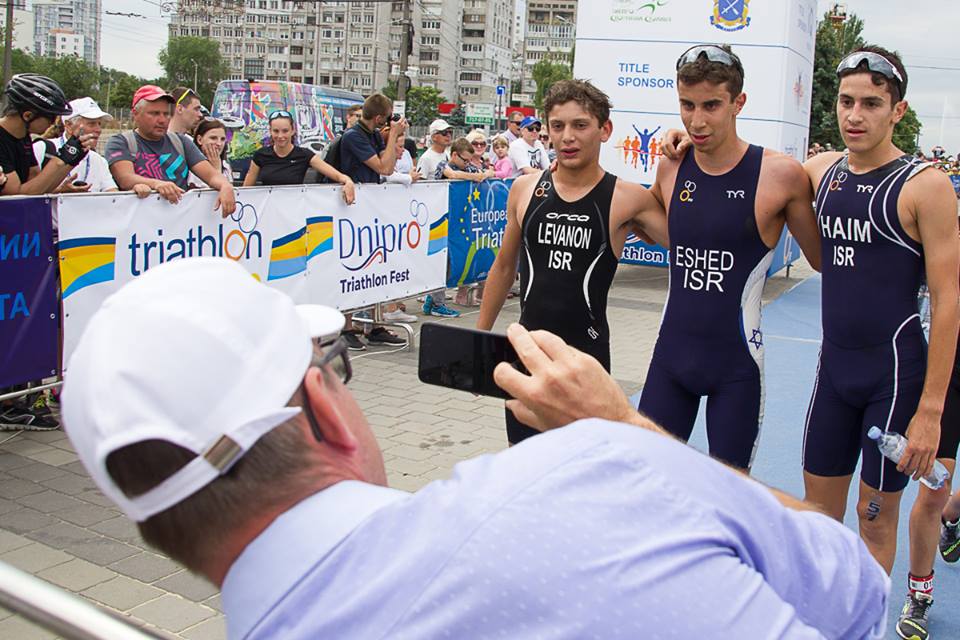 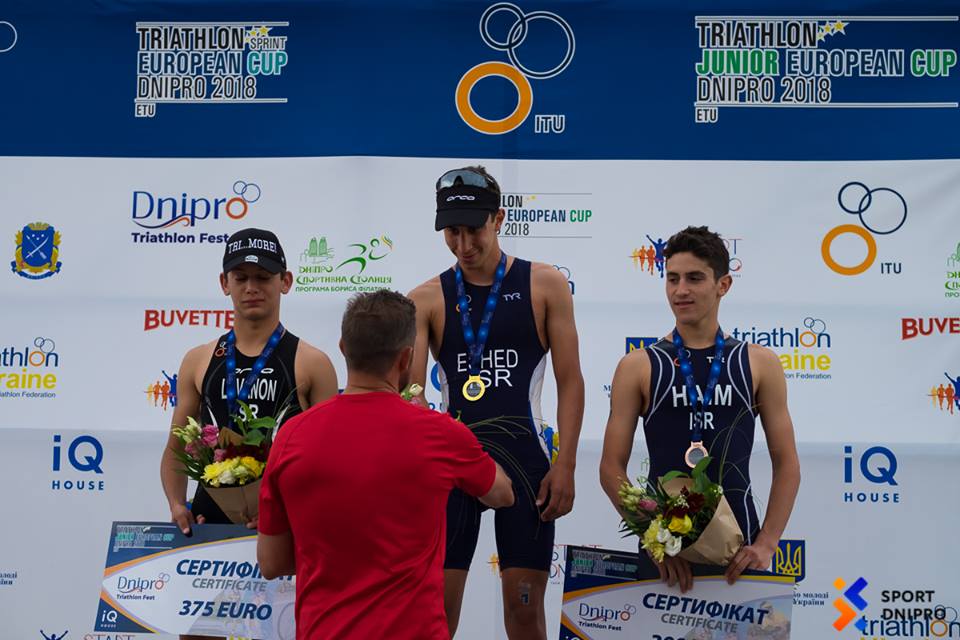