The double Olympic Champion came back with a blast in Cagliari only a couple of weeks ago. Having focussed more on middle distance events, he dropped down to Sprint Distance in Sardegna and, making a stunning return, romped home with gold. Having spoken to him after his victory, he declared that he would be coming to Weert. With start number 2, he would be up against a strong group of athletes, including Marten van Riel, the double European Champion João Pereira PRT, Vicente Hernandez and teammate, Antonia Serrat Seoane ESP. 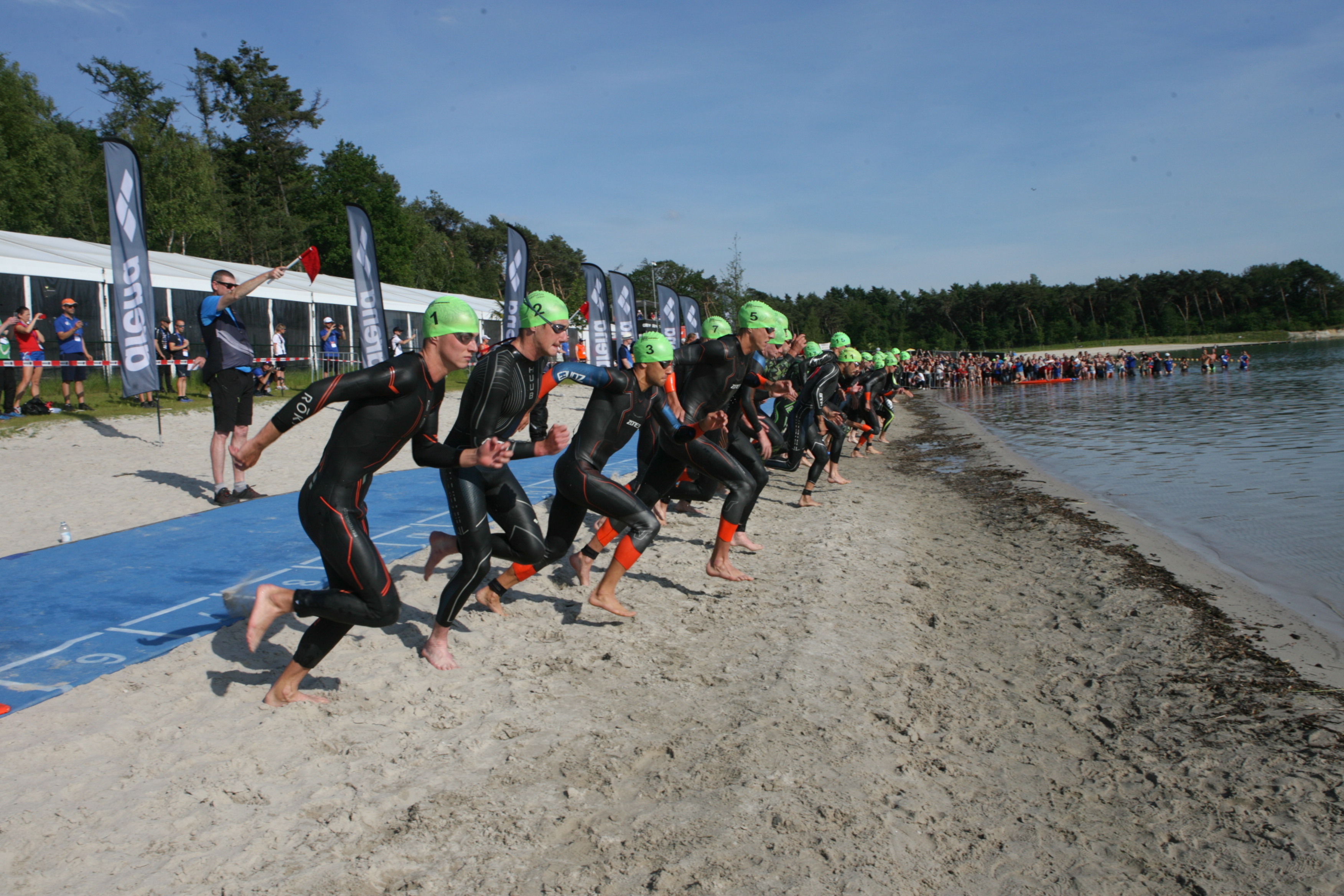 With the water still cold enough for wetsuits, the air temperature was pushing the mercury higher and higher and as it neared 30C, the final run would be punishing. As expected, the front end of the swim was a feast for Brownlee as the first lap was led by Igor Polyanskiy and Márk Dévay. The Brit was tucked in the draft as the first 6 athletes made their way back into the water.

The swim delivered Polyanskiy, Dévay, Brownlee, Serrat and Van Riel onto the blue transition carpet and in a flash they were out on the bike course, with a long trail of athletes behind them. The acceleration was immediate and suddenly the group was split as the powerful leaders, joined by another five, started to push the watts. The journey to Weert had the wind behind them and this was used to the full advantage and soon enough this group had established a lead of 22 seconds.

As the laps passed, the lead was extended to 30 seconds and then 40 and with the crowds now lining the course around the “Bassin”, T2 was a flash of athletes.

Out now onto the run course and soon enough it was the Yorkshireman kicking up the pace and leaving Van Riel, Serrat and Maximillian Schwetz GER. At the end of the first lap, his lead was 14 seconds but in less than 200m he had added another 3 to this. 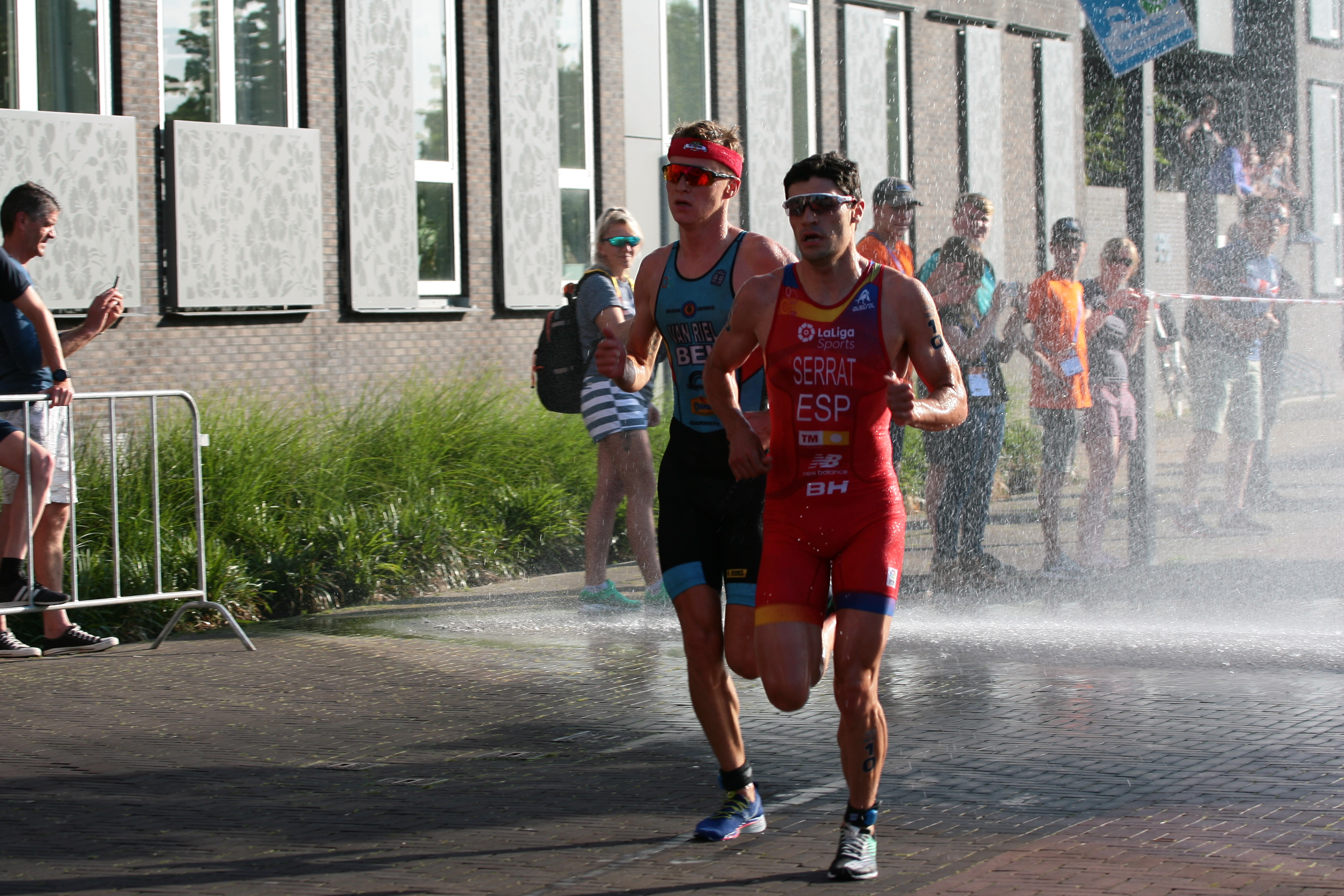 Van Riel and Serrat were locked together.

Lap after lap his power was taking him further and further away from the chasing athletes. Van Riel looked desperate and was soon struggling but behind him, Pereira was having the run of his life and had moved up through the pack to challenge.

The final metres saw Brownlee grab the Union flag from a group of children who went wild with excitement as their flag was carried all the way to the finish tape by their Olympic Hero. 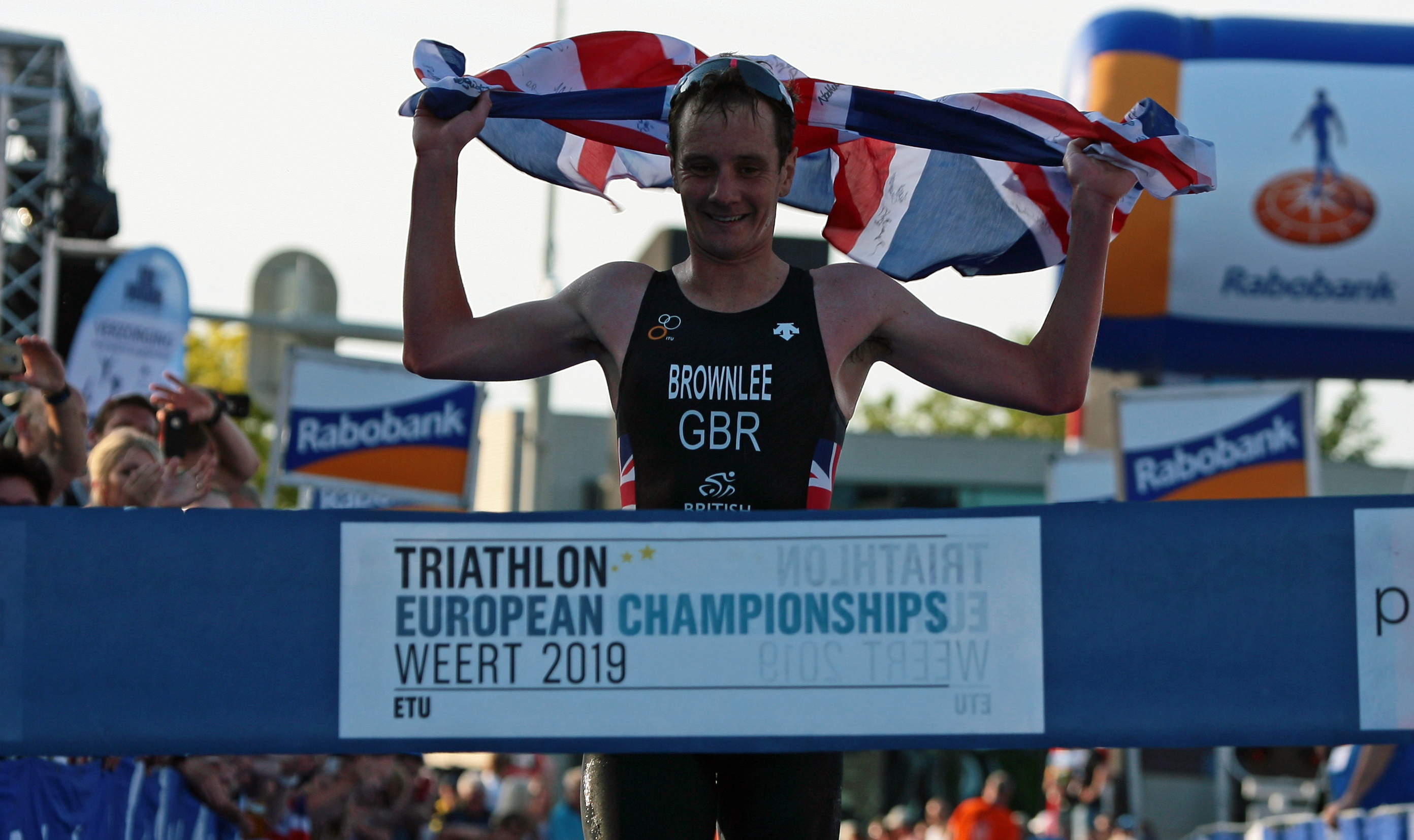 Claiming is 4th European title, after his last victory in Kitzbühel in 2014, he had time to enjoy the glory of the moment as the crowds simply erupted with cheers. The silver medal, that had looked certain to go to Van Riel, was snatched by Pereira, whose 10k was the fastest of the day. It was as if the Belgian athlete had kicked into reverse gear; his suffering was immense as compatriot Jelle Geens did just enough to keep the fast-finishing Rostislav Pevtsov. 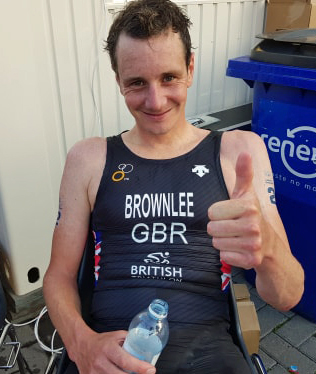 What an incredible return to the circuit for Alistair Brownlee. A victory on 18th May in Cagliari over the sprint distance and now, the European Title. Thumbs up from the Champ. For the Junior Athletes, the racing was just as intense and with the World Junior Runner-up, Paul Georgenthum as race favourite, the French supporters were out and about along the course to cheer him along. With the air beginning to warm up, the wetsuits must have felt hot. The swim saw no real breakaway and soon enough, led by Hungary’s Levente Karai, with Ricardo Batista just a stride behind, a long line of athletes made their way from swim to bike.

A huge peloton made its way from the Blauwe Meertje towards the city and a couple of athletes found themselves out of the race and on the side of the road. No serious damage but it was pretty intense out there. T2 was a frantic moment and it was the skills of the Frenchman that saw him survive the crush and set about the 5k. In Gold Coast, the silver medal went to Georgenthum but teammate Boris Pierre had missed out on a podium place by seconds.

It was with Batista that the two French athletes were now putting the pressure on the rest of the pack and slowly they began to edge away. It was a killer kick from Georgenthum that set in motion the final attack and he pulled away from Pierre and Batista. 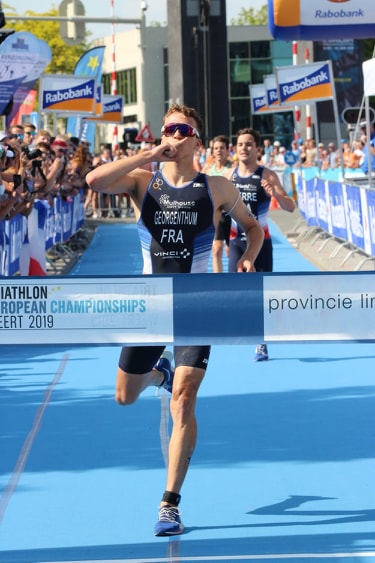 With less than 100m to go, the Frenchman had the win but behind him the battle was on. The crowds were screaming at the athletes as first Batista, then Pierre seemed to have the advantage. Urged on toward the finish, the lead changed again and again and as they hit the line together, exhausted, it was Batista who just lost out.

Easily one of the most thrilling finishes of the weekend so far. True delight for the French team.

The Age Group athletes had raced in the morning. For all the Women and for the men in the 55+ categories, there were medal-winning performances from 11 different nationalities. Whilst the majority of medals went to Germany and Great Britain, the host nation, with its relatively small Age Group Team, will be happy with the results so far.

The table below shows the medals so far, including the Elite and Juniors.


Thanks to Dani Marquez for the Junior finish photo.