The rain could not put them off.  West coast France treated hundreds of athletes to a typical mix of Atlantic weather with a mix of early rain and later sunshine as l’Aiguillon-sur-Mer burst into life as “Triathlon Central” for the weekend. Many eyes were focussed on the far North and the razzmatazz of the Grand Prix in Dunkerque but here it was the chance for the Juniors to show their skills and for a massive entry in the open waves. Please click the links below to see video action from the race. 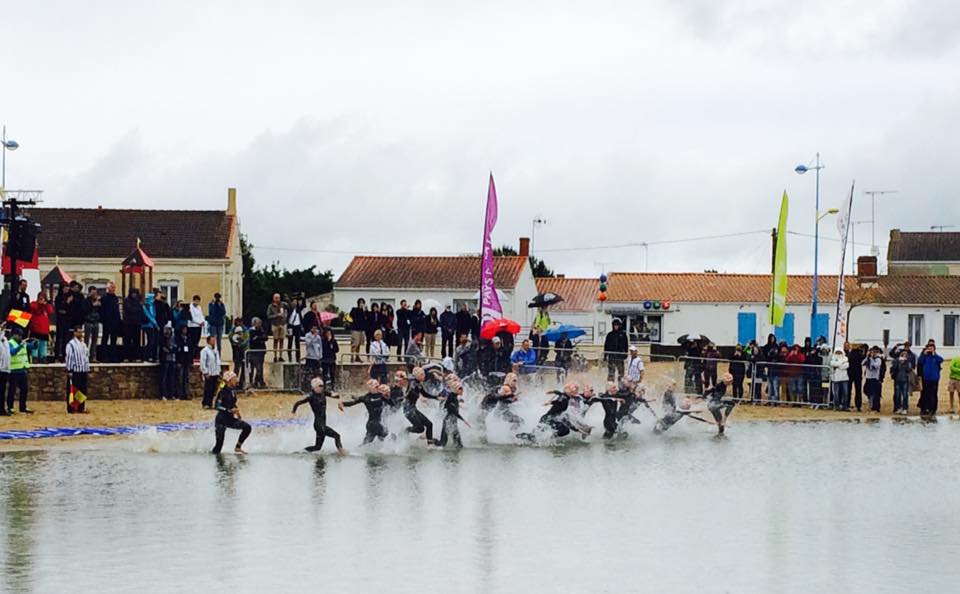 The action started in a salt lake that is protected and sees the athletes start from one end of the lake, then swim a long straight before their first turn. This enables them to sort out their positions and avoids any potential crush at the turn buoys. A sharp turn and then they head back and then turn to their right to exit the water and run to T1. Just one lap but it would prove to be a tough race out there in the water. After the swim came a 4-lap 20k bike course around the city before the two laps around the lake to end with the 5k run.

The Junior women were first to race and an early lead was established by Jessica Fullagar FRA. On her toes was Lena Berthelot-Moritz FRA and Belgian, Hanne de Vet.

They had a small advantage over the chasing athletes. Amongst those chasing were more Belgians who were determined to get up amongst the medals but the conditions were challenging and the fact that so many athletes did not know each other or indeed know each other’s strengths and weaknesses opened up the race.

Once out onto the bike Fullagar established a lead. Behind her, De Vet did her best to keep ahead of the chasing pack. Fullagar led to T2   A large group followed. 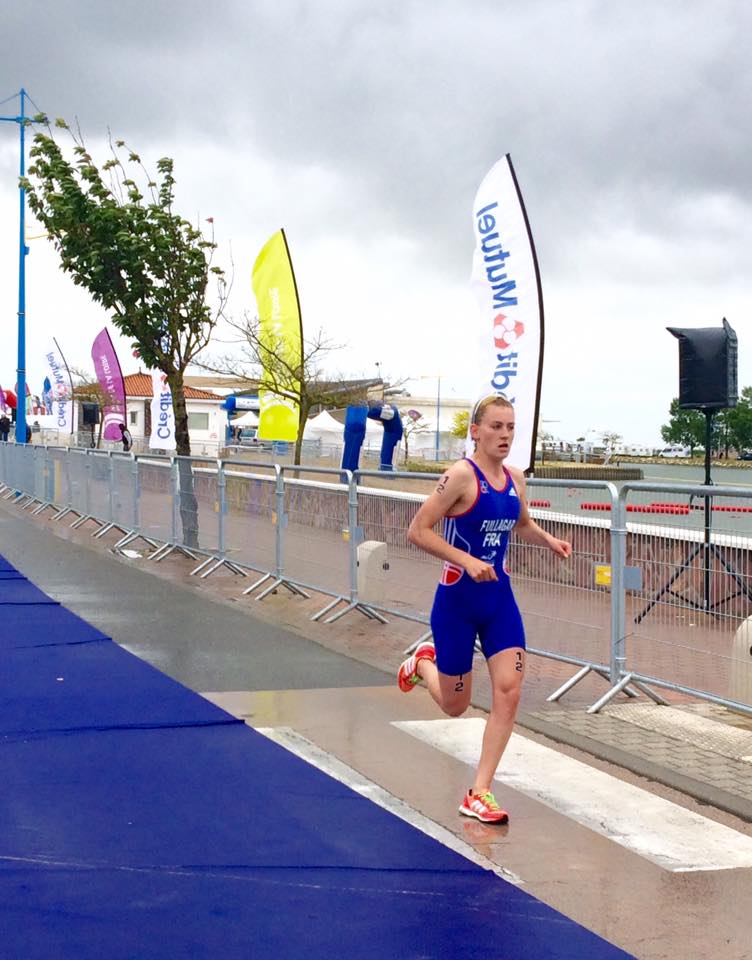 As the run unfolded, Fullagar did her best to keep her lead but behind her two French athletes, Audrey Ducornet, Pauline Landron and Belgian Laura Swannet were pounding the pathways and eating into that lead.

With one lap down and a lead of 18 seconds Fullagar looked back and that was it – the run pace of Swannet and Ducornet was too much for her and they caught her. She dug deep and found just enough and her determination was sufficient to keep her on the podium and to deny Landron a medal. It was Swannet who led to the finish tape, with Ducornet taking silver.

After the race Swannet was lost for words but from all over Belgium and further afield there was praise for this young athlete who ran so well to take the title. To have raced with only one bike shoe makes this even more of an impressive performance. When the sheer delight of winning had settled, she found time to say, “I had a bit of luck during the swim and did not lose too much time. That enabled me to catch up with the peloton on the bike. There was a lot of work going on in the pack and towards the end of the bike I tried to get to the front to be first of the pack into T2. First in, second out then along with one of the French girls we had a gap of about 30m to the second-placed athlete. The run was tough, really rough and it took me the whole first lap to catch the second athlete. Once there I could see we were near to the leader and we got closer and closer. All of a sudden it was over. I cannot believe it, unbelievable. A tough run and well done to everyone who raced.”

Ducornet told us “the race was a good one for a first experience. The run was great and cycling as a peloton too. I found the fact that we did not know the others quite interesting. As a first race – very positive!” 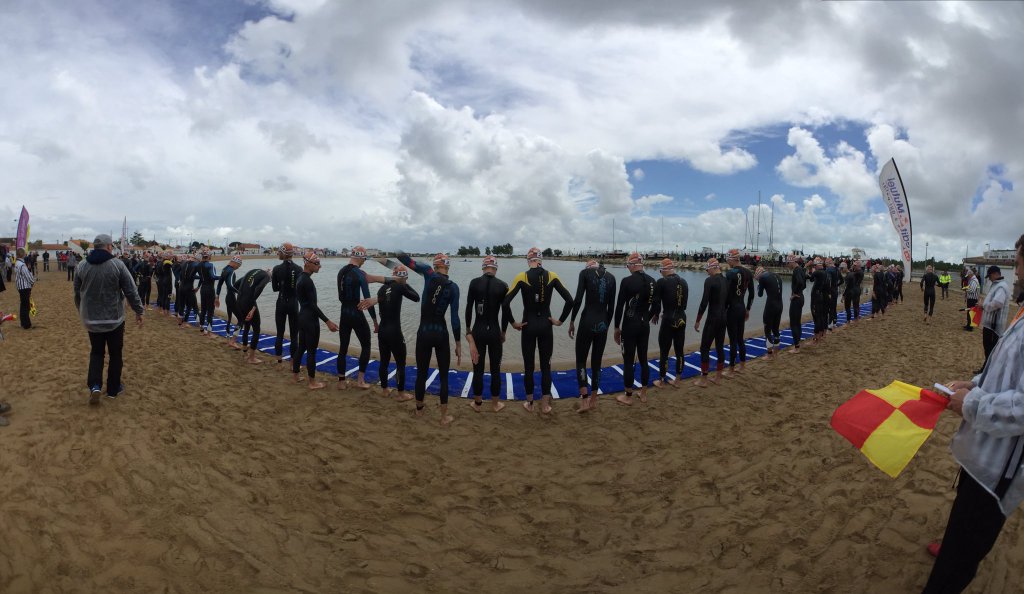 The men raced in the afternoon. The gusting winds of the morning had not gone away and there were still pools of water out on the course to make it a challenge for the over-enthusiastic.

Lined up and ready to go, the swim start went well and the athletes raced down the beach to the water.

The swim did not break up the athletes too much and at the front end five athletes came out more or less together who would finish the race. Paul Georgenthum FRA worked hard to keep control but behind him and a few seconds adrift from the leaders, was Sam Laidlow FRA. This young man, fluent in French and English would work hard to bridge the gap and take with him several strong cyclists. He had shown his bike strength last year at the Châteauroux ETU Triathlon Junior European Cup, where his run pace was not as good as it could have been due to injury. What could he do now? Was he race-fit?

The bike saw a breakaway with 6 athletes taking control. France had four there working away and Swiss and Belgian hopes were rising as they had two athletes tucked into the group. Further into the bike and four escaped, having dropped Simon Westermann SUI and one of the French athletes.

Coming into T2 it was the four, still ahead. Then it would be down to them to battle for the three medals. Can you imagine the determination? 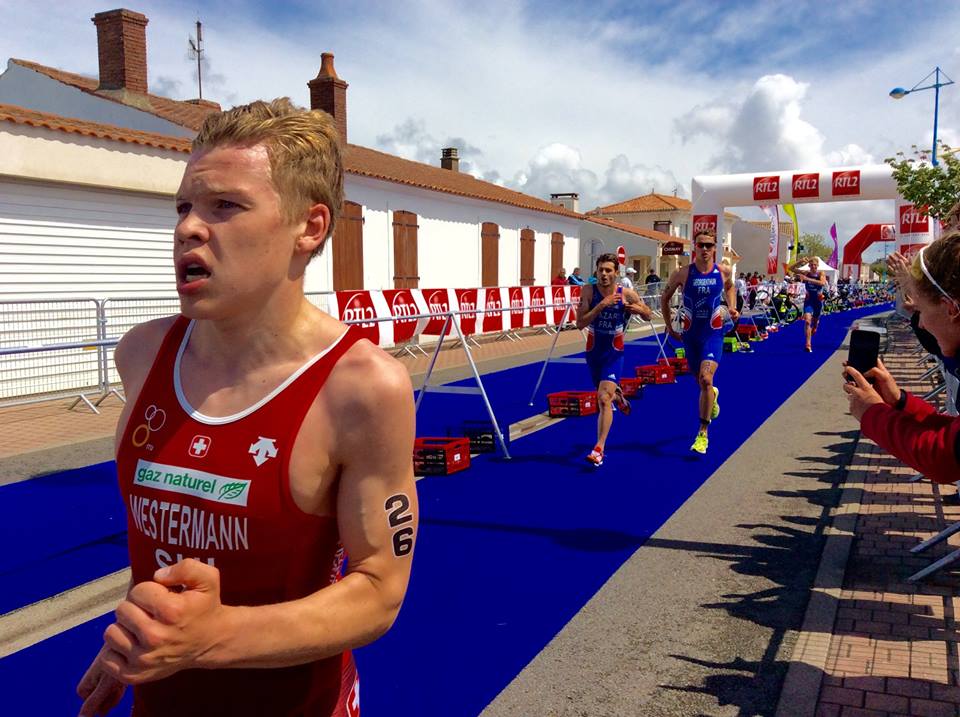 Westermann had been dropped on the bike but setting off for the run he could see the leaders in front of him. Behind him and tucked deep in the chase pack was Frenchman Mathis Margirier. He was one of the strongest runners and soon started moving up towards the podium places.

In front of him and hoping it would all hold together were Georgenthum and Laidlow. The linguist was the one with the kick and he just had enough to edge out Georgenthum.  Margirier had ripped the field apart and left the Swiss athlete behind to take the last medal. 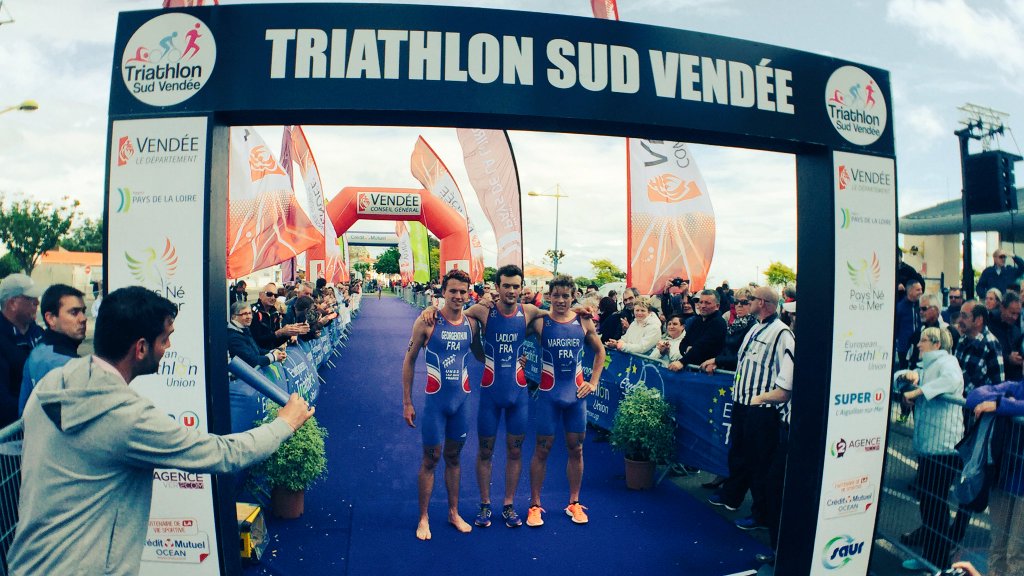 After the race, Laidlow explained, “I am over the moon. I rarely find that much confidence in myself during a race. I was far from being the best athlete on the start line but I just focused on one thing at a time all the way to the finish line. I got drowned in the first 50m of the swim. It took me a while to swim back up to 8th ... Beforehand I was planning on attacking on the bike but I wanted to test my running (my weakness) and so I set out fast and didn’t look back ... It paid off and for my 2nd ever ETU cup, I couldn’t be happier. I’ve worked very hard all winter and had ankle ligament problems stopping me from running. It’s slowly but surely coming back and this victory is after all just another step to my dream. I am very lucky to train with incredible athletes in Montpellier and to have an incredibly supportive club (Poissy). I also want to thank more than anyone else my parents. They and my little brother are an inspiration to me. Time to head back to training now and hopefully be on a few more ETU start lines in the future.” 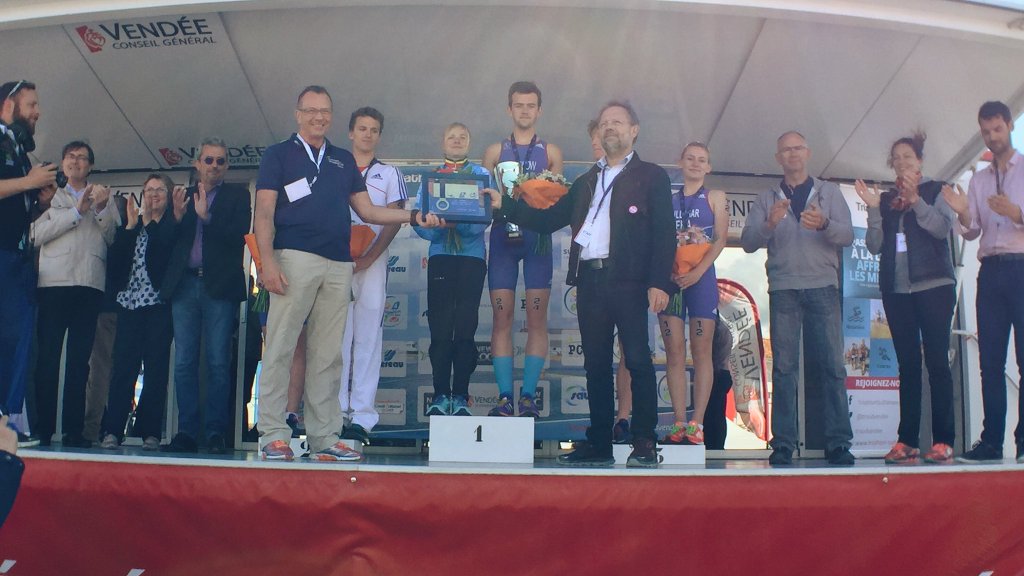 The awards ceremony was used by ETU Executive Board member and CEO of Triathlon Ireland, Chris Kitchen to thank the organisers. This weekend was not just an ETU Junior Cup event but in fact a celebration of triathlon for young and old. Great location. The legacy has begun. Thanks to Triathlon Sud Vendée for the videos.