Dnipro victories for juniors from Latvia and Hungary.

The first races of the day saw the Juniors dive into the warm waters of the Dnipro. Racing the same distance as the Elite, later in the day, no doubt the results will be closely studied to see how the performances compare.

With the live TV feed giving us excellent images from high above the water, showing this side of the city off to perfection and with the weather offering near-perfect conditions, the anticipation was indeed there.

It was indeed Latvia’s Daniela Leitāne who won the race but she had to do so from a massive deficit in the swim. First out of the water, to the delight of the spectators, was Sofiia Tkach. She had a 20 second lead over Latvia’s Kristiāna Maskava who was just a stride ahead of Monika Dobrovolska.

From the pontoon, the swim is against the current and so the easiest swim line was along the river bank, before heading out deep, where the current would rush the athletes back towards the final turn to the exit. 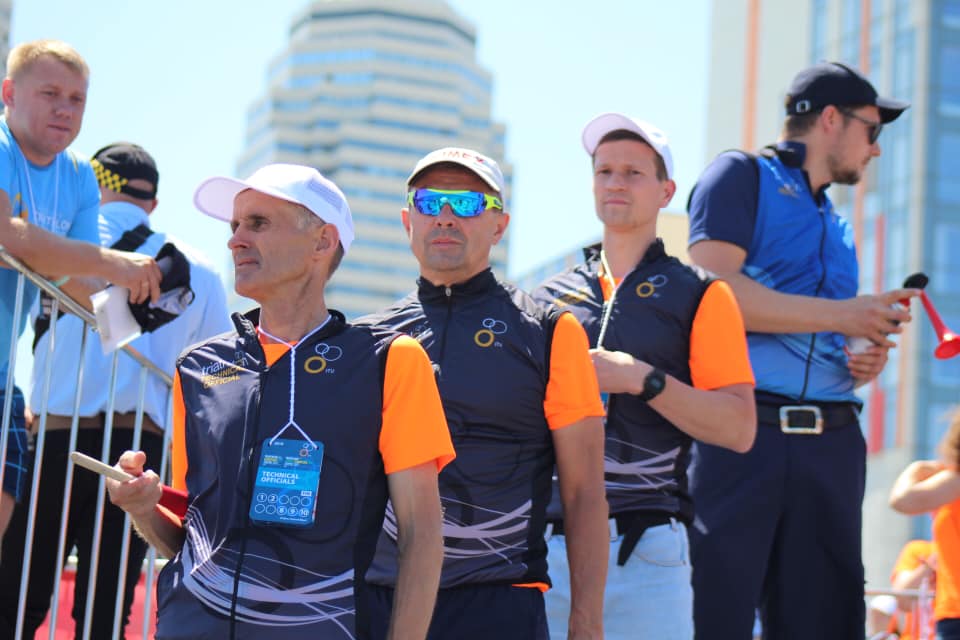 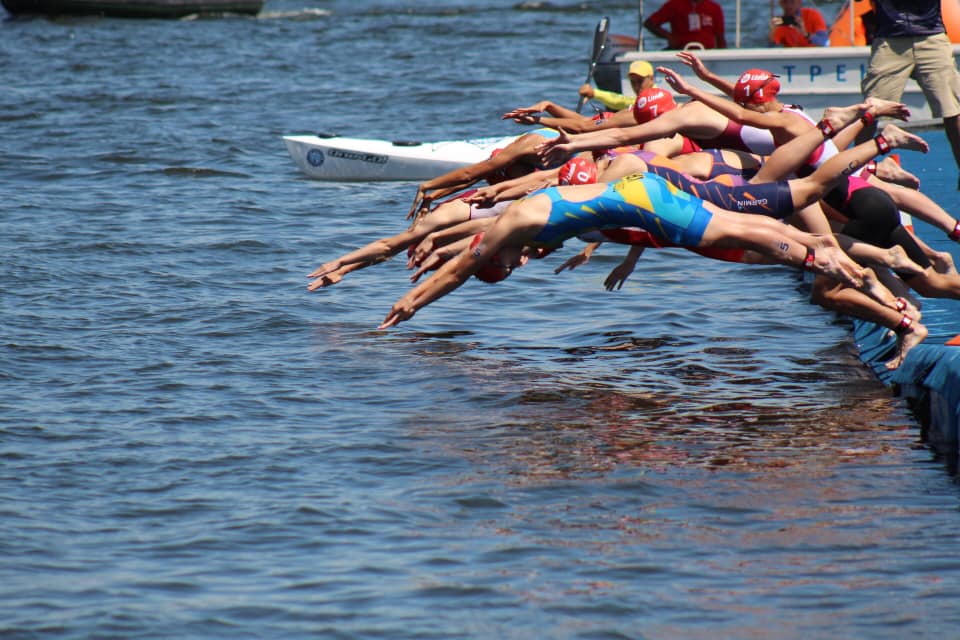 A clean start. A non-wetsuit swim made the spectacle even better and soon enough the field was split as the stronger swimmers got into their rhythm. It was Tkach, swimming powerfully, who made the first buoy and then turned out towards the other bank of the river, which here is some 2km wide.

Her lead established, she was able to catch a quick look behind her to see where the other athletes were. The kayaks out on the swim course did a magnificent job to ensure the safety of the athletes and were clearly experienced in these fast-running waters. Always there but never in the way. Text-book stuff.

Tkach took full advantage of the current on the return and with long, reaching strokes. The gap grew. Maskava was the only one close, with Dobrovolska tucked in tight behind in the draft. They tried going a bit deeper but even with the added speed of the current out there, they could not catch Tkach. 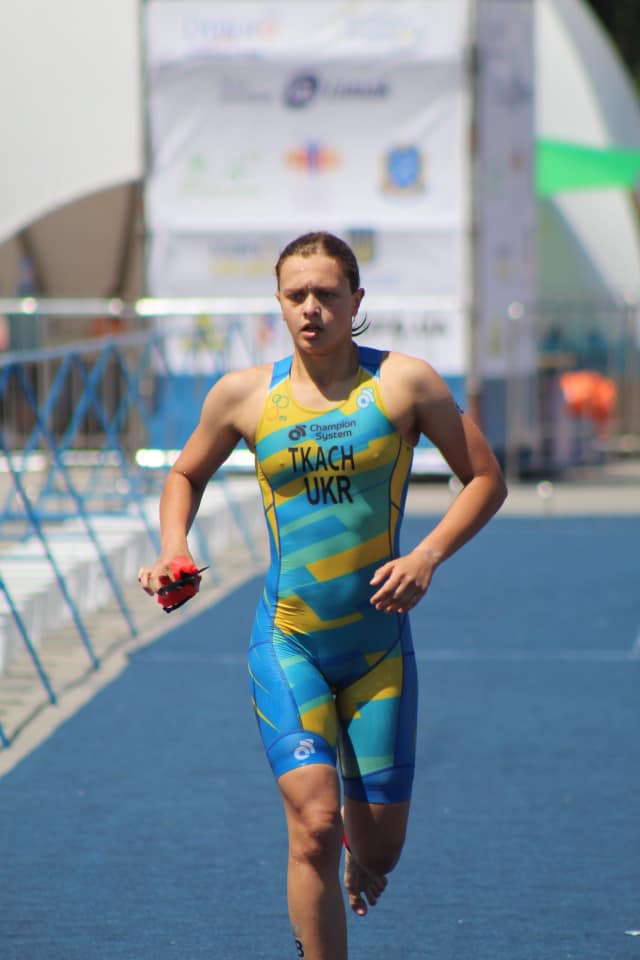 The run from swim exit, up the steps that line the river bank and then along the carpet to T1, is a long one and allowed the crowds to see the big lead that had been created by the young Ukrainian. Cheers rang out to urge her through the transition from swim to bike. 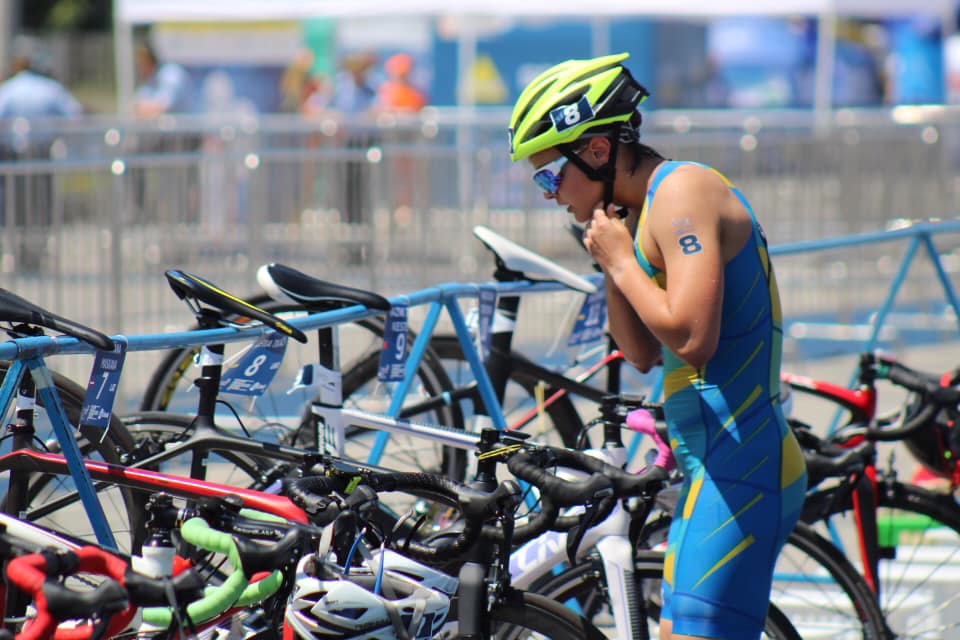 A great swim but on her own, all that effort could be lost. The three would need to work hard to escape the more powerful riders and runners. Leitāne was still in the water and it seemed an impossible task for her.

Tkach led, on her own but was being chased by Dobrovolska. Benefitting from the fast downhill, Tkach kept her lead but as she neared the end of the first lap, could see where the threat was coming from. Joined by her teammate, the pair knew what they had to do. One lap down, two laps to go.

The bike course is a challenging mix of fast, flat and good-quality roads, with a snappy climb and a fast descent, before it returns to the riverside and it was out on the bike that Leitāne attacked, using the power and skill she had built up racing the UCI circuit.

With incredible power, she was able to catch the leaders at the base of the climb. Game on. 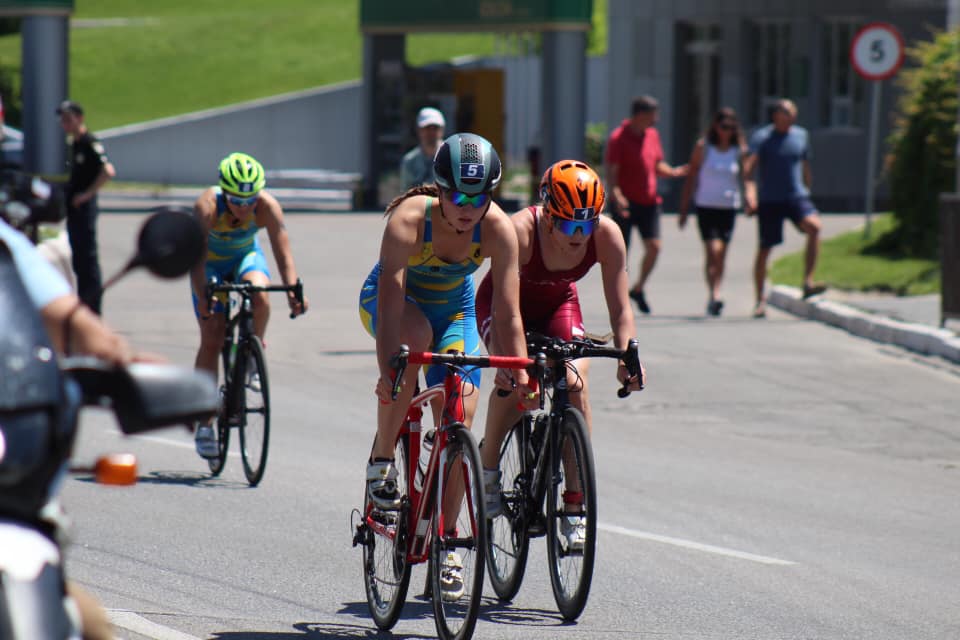 Having bridged the gap, it would now be up to the trio at the front to work together and increase the pace.

She attacked when the speed was not to her liking and, on the long, sweeping descent, broke free. Taking the racing line showed Tkach where to follow and then, for Dobrovolska, it was time to work hard, or lose all the benefit of her hard riding on the first lap.

The Latvian attacked again. This time on the flat and there was simply no response. Latvia leading, Ukraine, now two athletes, chasing.

Out on her own, Leitāne continued to push hard and her lead grew. Behind her, with silver and bronze in mind, it was Ukraine’s Tkach and Dobrovolska.

As the Latvian took the last dead turn, she was able to calculate her lead and set out on the run knowing how to pace herself. 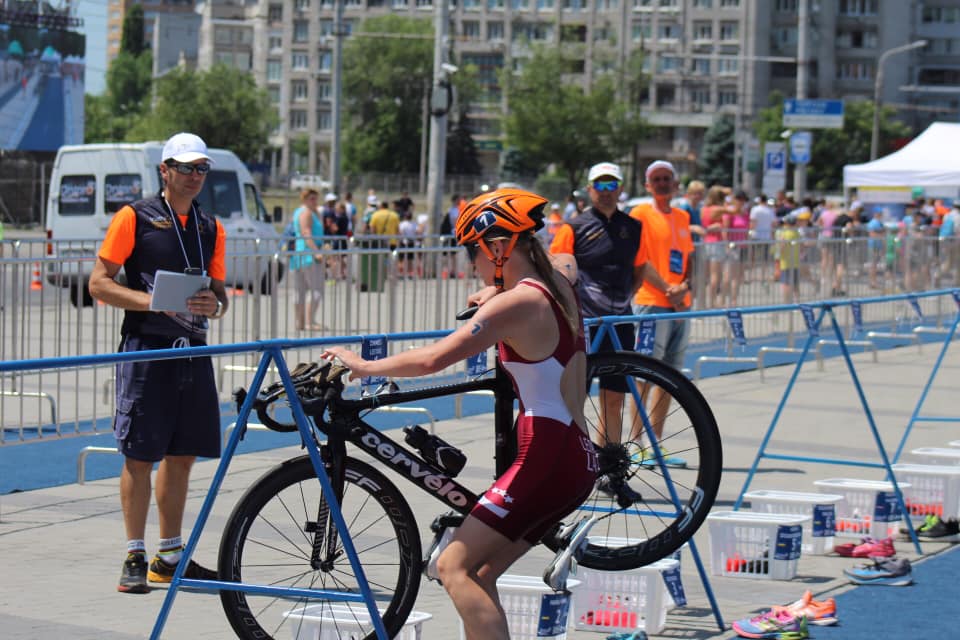 The run course is along the river promenade, dead flat and lined with spectators. 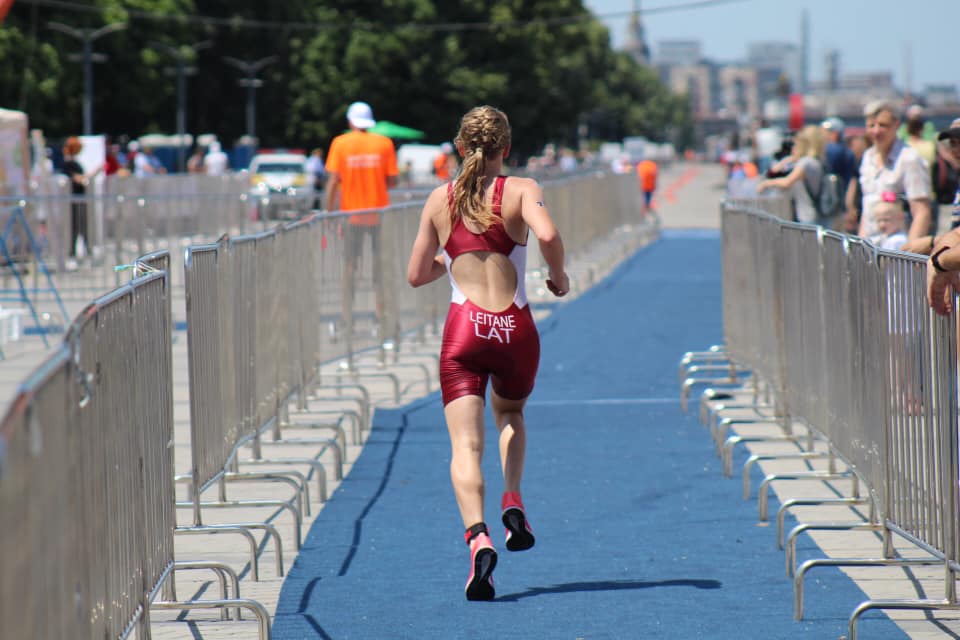 A dead turn at the far end and a sweeping turn around a large ornamental flowerbed close to the finish area and the main throng of spectators. With news of the race fast-spreading around the city, more and more spectators, their curiosity sparked, came to watch.

As with the swim, the run from dismount was a long one. Leitāne was out of T2 and onto the run before the Ukrainian pair came off their bikes. A complete reversal of the earlier stages of the race.

Running easily, she needed now to keep hydrated in the heat and to pace herself well to collect her second gold medal, having won in Kupiškis in 2016. The gold was hers and in style. 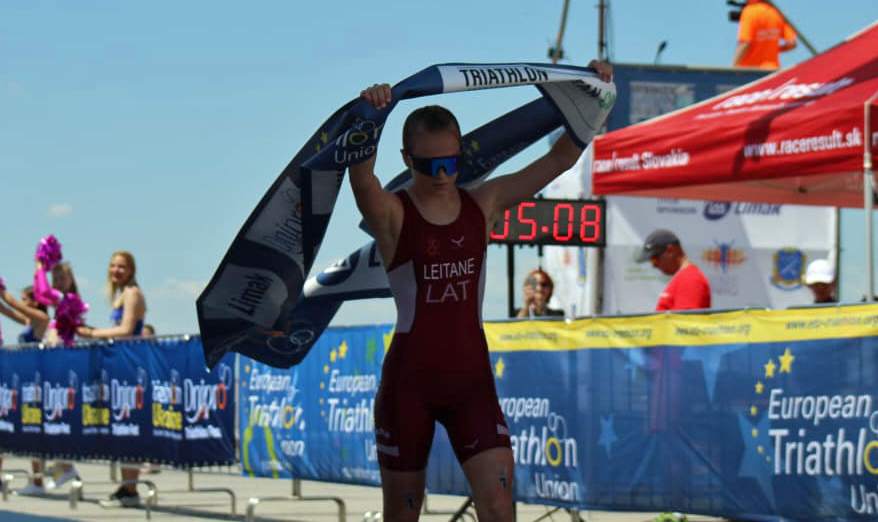 This was one of the most impressive performances on the bike that we have seen this year and one that will give her great confidence for the race in Riga on 11th August. 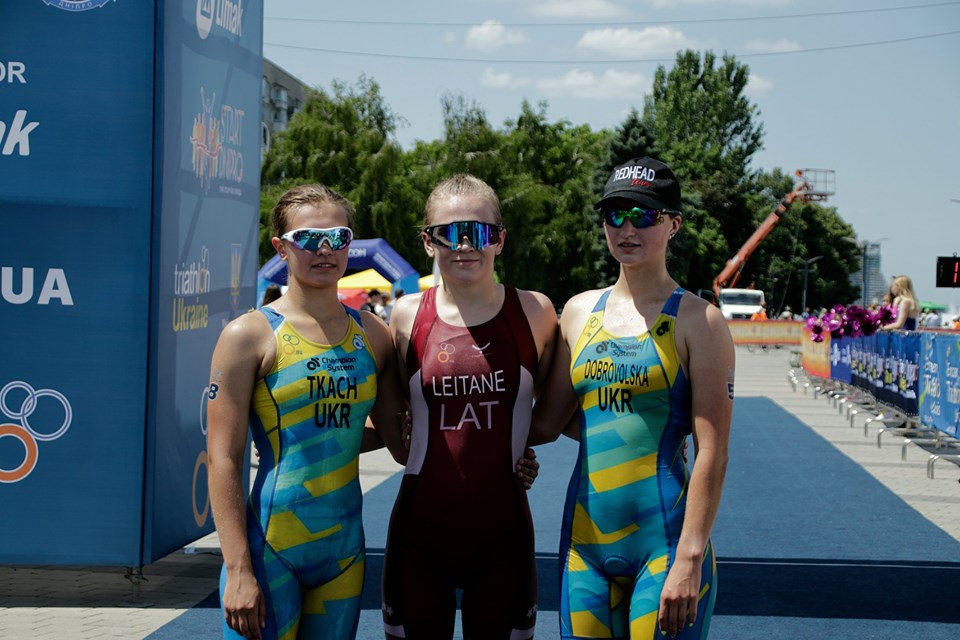 Silver and bronze to the host nation.

The scene was set now for the Junior men. 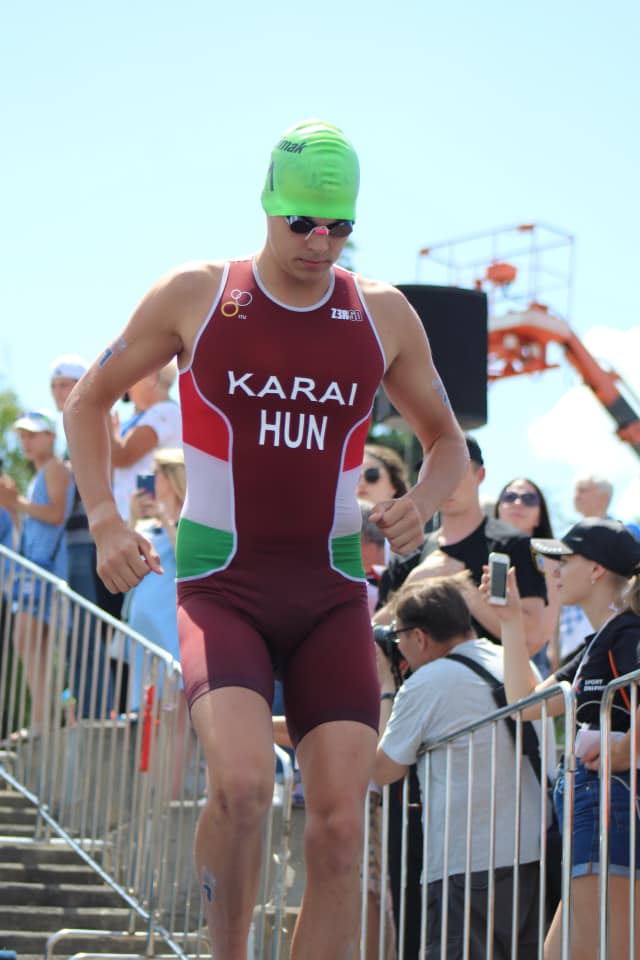 A bigger field. More nations but with one man who comes to this race fired up after an incredible performance in the relays in Weert. Hungary’s Levente Karai was about to stamp his mark. 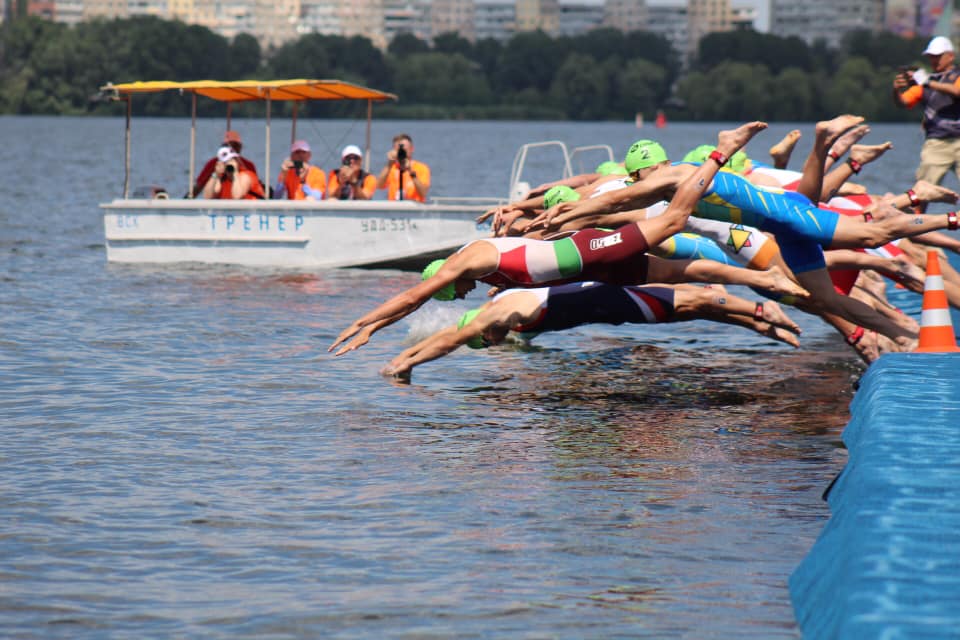 From the very moment the Junior Men set off from the pontoon, he attacked. Swimming into the current and managing to escape from the pack, the Hungarian led them to the first buoy and with only Žiga Hutter SLO for company, the pair established a solid lead by the time the 750m swim was over. 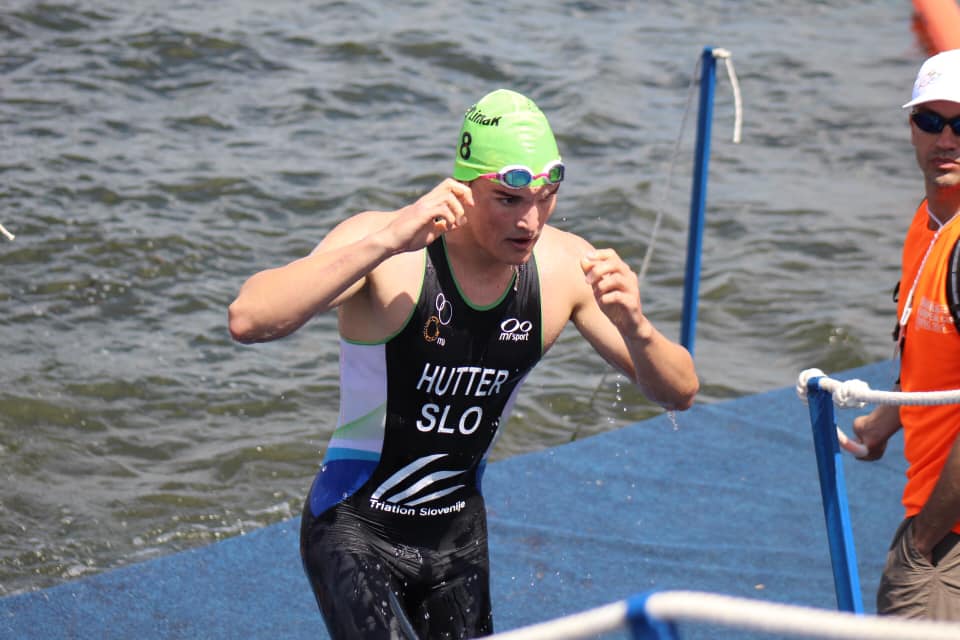 Hungary leading - Slovenia one step behind.

Into T1, a faultless transition to the bike and they set off for the 3-lap, 20k ride. Could they possibly keep ahead of the chasing athletes? 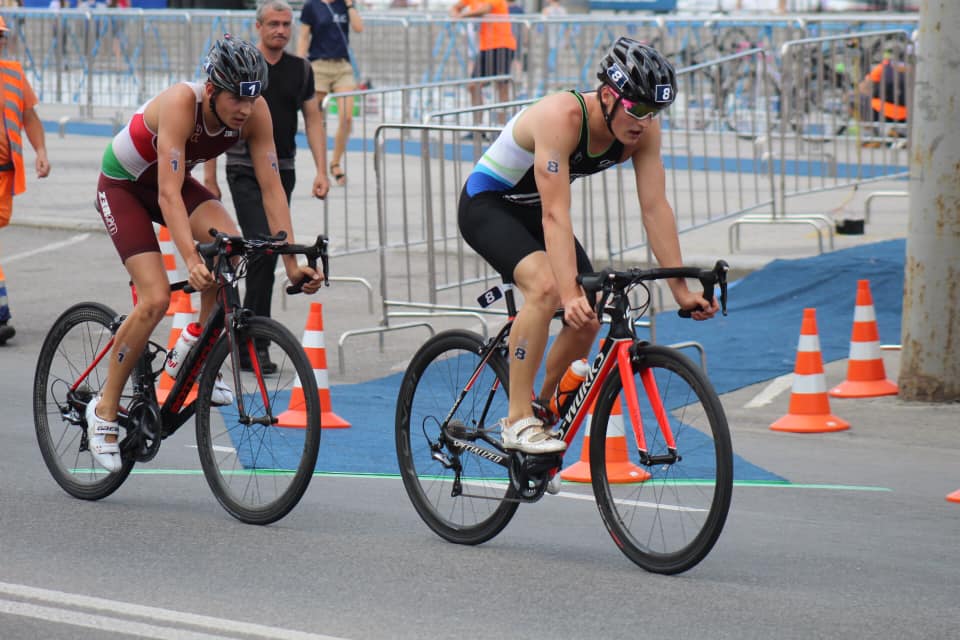 Well, with the flat sections, the climbing and descending sections and the dead turns, there was something for everyone and the odds were stacked against the leading pair. Initially managing to get the chain-gang working well, the roads were clear behind them.

Regular checks over their shoulders indicated that their lead was solid but as they turned off the flat and headed towards the climb, the first of the challengers was just coming into view.

A 12-second lead was held as they neared the dead turn back on the riverbank. One lap down and they had held the lead and it was along this flat and wide section of the course that they could see the other athletes and, within that group, one who was powering along. 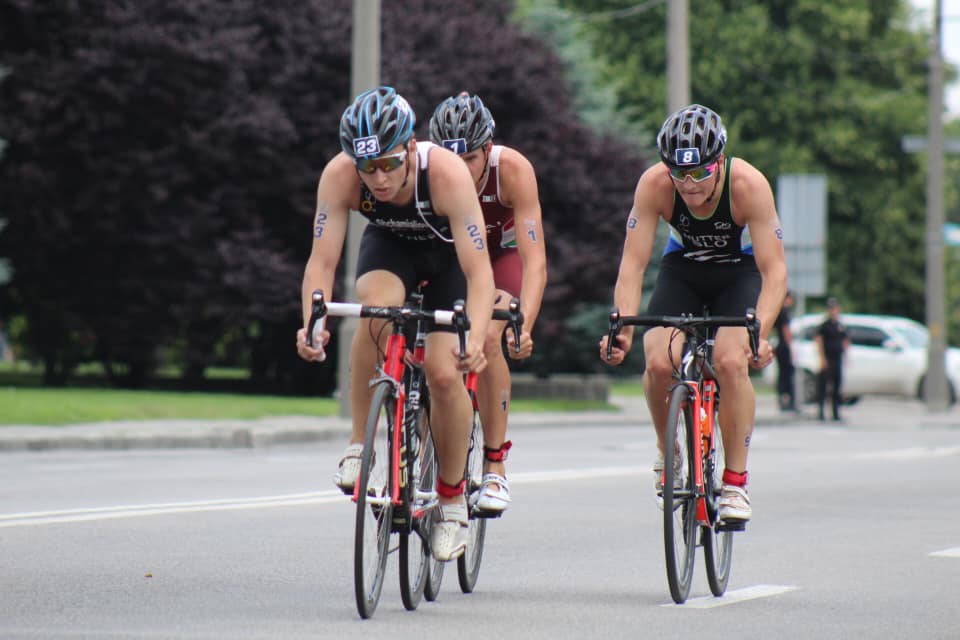 From Belarus, Tsikhan Shchamialiou had kept his head down and was pushing incredibly hard.

And then they were three.

Shchamialiou not only caught the leaders but he then started to attack as they climbed the hill. This added fuel to the fire and suddenly the three were moving faster than before.

Tight riding, with more coordination took them into a very comfortable position and now, with just three medals available it would be the final 5k that would decide the order.

Karai had shown greater run pace than Shchamialiou in Tartu and was coming to the race in a very positive mood. His sprint finish in the relays in Weert that gave his team a bronze medal would serve him well. Hutter lost out in Pontevedra in the World Aquathlon Championships to a faster running Vitalii Vorontsov UKR but he was back in the chase pack. Could he possibly hold on to bronze here in Dnipro? 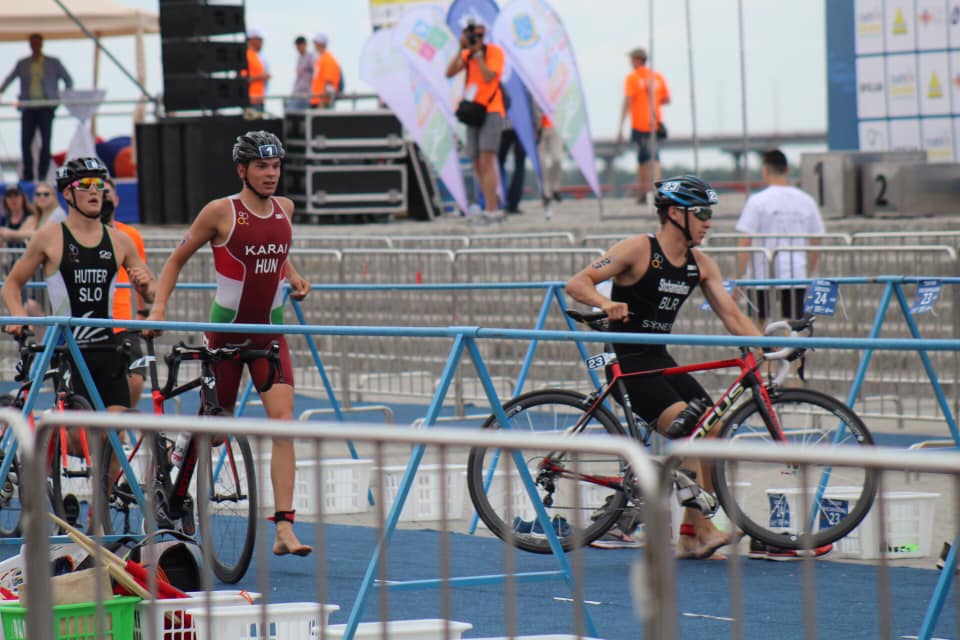 It was Belarus leading them into T2.

It was Belarus leading them onto the run course.

It was Karai who looked more relaxed and in no time at all it was the Hungarian who took to the front and began to open up a lead that would, could never be matched.

Dangerously, Vorontsov was only some 20 seconds behind and, with local cheers urging him along, he exploded out of T2, with the leading athletes dead ahead. 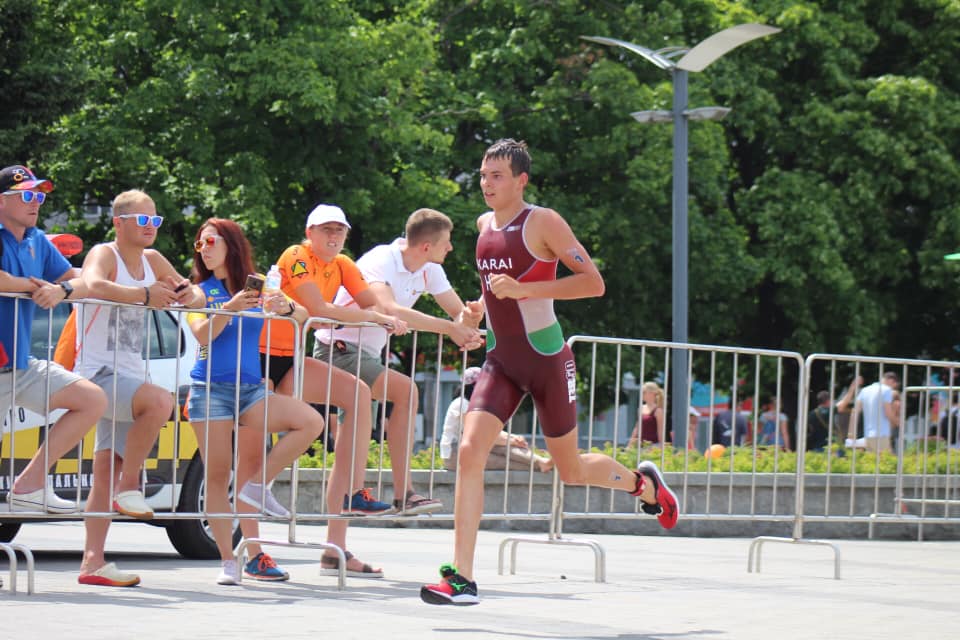 At the first dead turn, Karai must have known that the race was his. The lead he had created in the first half lap was massive. Behind, Hutter looked as if he was suffering. Shchamialiou was doing his best to hang on to a medal but Vorontsov was getting closer and closer. No real threat to gold but silver and bronze were locked onto by the Ukrainian athlete.
20 seconds up. Shchamialiou having the race of his life. Hutter aware of the yellow and blue uniform behind him. Vorontsov determined to claim a place on the podium.

The crowds were delighted to have such a great race to watch.

40 seconds now and the battle for silver and bronze was on between Belarus and Ukraine.

Vorontsov edged past Shchamialiou at the far end of the run course and had to admit that Karai’s running was superior. No way could he catch the Hungarian now but a silver, on home soil would be a good result for him.

With one lap of the run left, the supporters for Vorontsov were now lining the course and they applauded the fine running of Karai and the determined efforts of Shchamialiou all the way to the line. 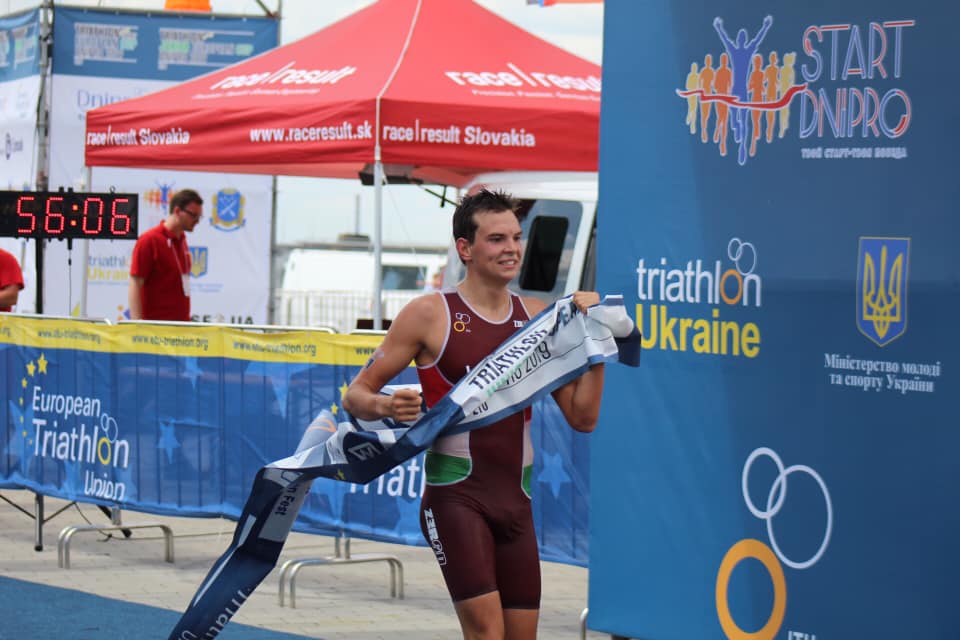 Job done. Gold to Karai and a well-deserved victory for an athlete who led from the start. Silver went to a delighted Vorontsov and for Shchamialiou, his run was god enough to hold onto the bronze. 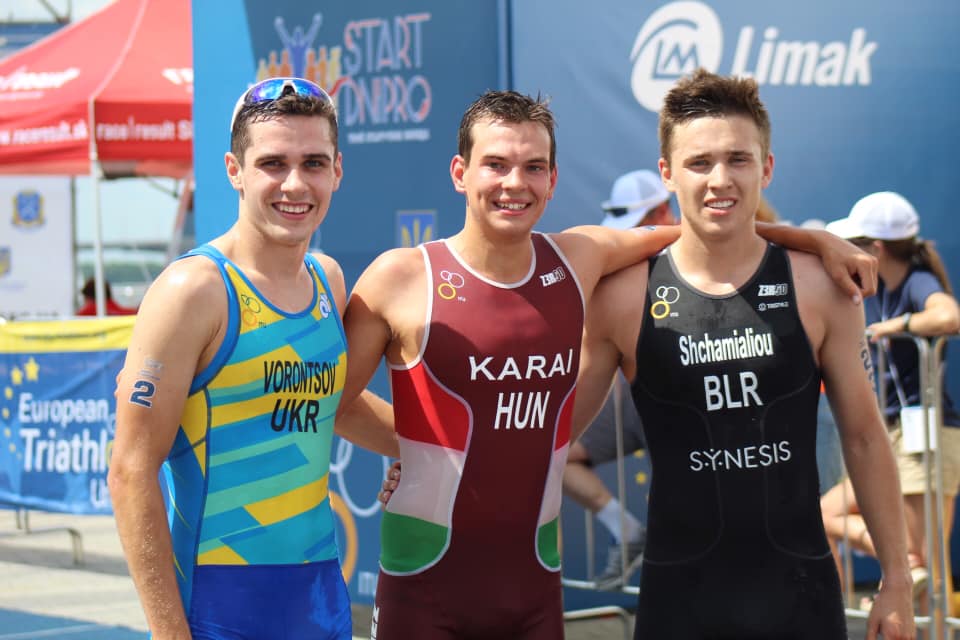 A very big thank you to Bachuki Darsaniia for his photos. Check out the album here.