For the Elite Women, the gamble was the same as for the men. Places for Rio were already pretty much decided and so long as nothing dreadful happened, this race was ideally timed for a test of readiness. Of course, there was also the small matter of points and prize-money and perhaps the chance of another European title. But who of these top-class women would be in with a chance?

The line-up was impressive. With the 2015 ETU Rankings champion, Ukraine’s Yuliya Yelistratova there was Vendula Frintová CZE who on current form was the strongest athlete, with a steady collection of points around the circuit. GBR’s Lucy Hall and Jessica Learmonth, the top medal winners from Quarteira, who put on a masterclass of biking and absolutely destroyed the rest of the field were there. Hall hit the bike hard again in Madrid and left the rest behind to take gold there, an improvement on her silver in Portugal. Would these two be able once again to break up the pack and establish a lead strong enough to keep the faster runners off the gold position? Rachel Klamer NED was also here. Her 5th at the Gold Coast WTS event showed her to be in good form. Agnieszka Jerzyk POL with a strong silver in Huatulco is also in good form. It is nice also to see Ece Bakıcı TUR back inform after her fracture of the femur in Baku. A long road to recovery but here she is, racing once again and joined by team-mate Ipek Öztosun who has moved up from the juniors and is now finding her way around Elite racing.

There were a few drops of rain but the clouds were fast-moving and the streets were lined with spectators as the sun came out. The swim was hardly a surprise.

But it was as rough for the women as it was for the men. 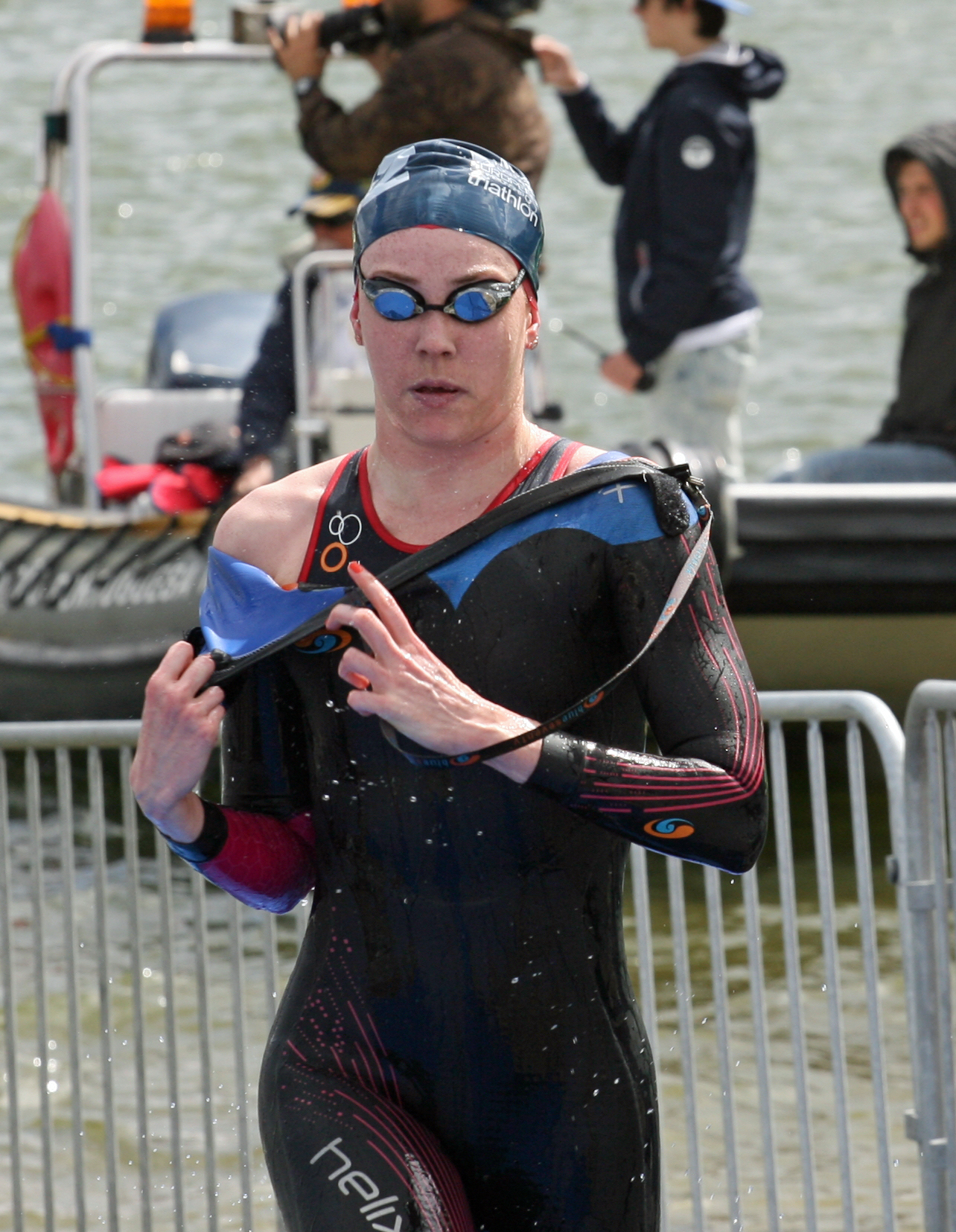 With Lucy Hall on the start line it was pretty much inevitable that she would lead but would Learmonth be able to find her in the water and then skip through T1 and out onto the bike as they had done before? Hall smashed the swim with a 17:55 and followed it with one for the fastest runs up the blue carpet and then along the paths and down into the stadium where the Elite had their transition area. The music was booming out, the commentators’ voices were echoing around the MEO Stadium as Hall sped into T1 and disappeared out on to the bike. She was alone. Behind her, Hungary’s strong swimmer, Margit Vanek, winner in Melilla earlier this year, was close behind but soon dropped as Hall pushed the pedals. 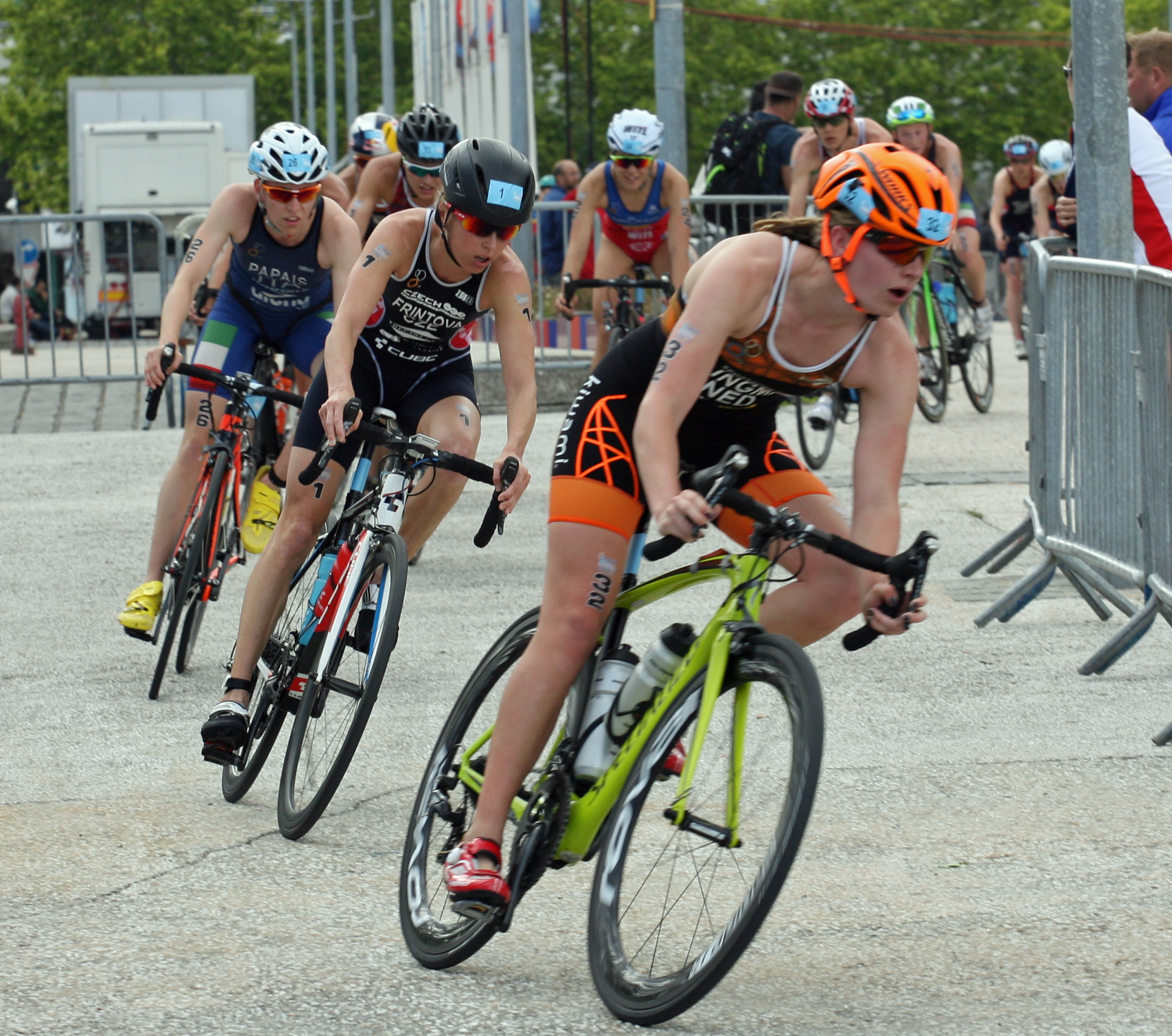 Anastasia Abrosimova RUS tried to catch Hall but also failed. Hall was in a class of her own on the bike but desperately needed someone to work with her around the technical 40k bike course. 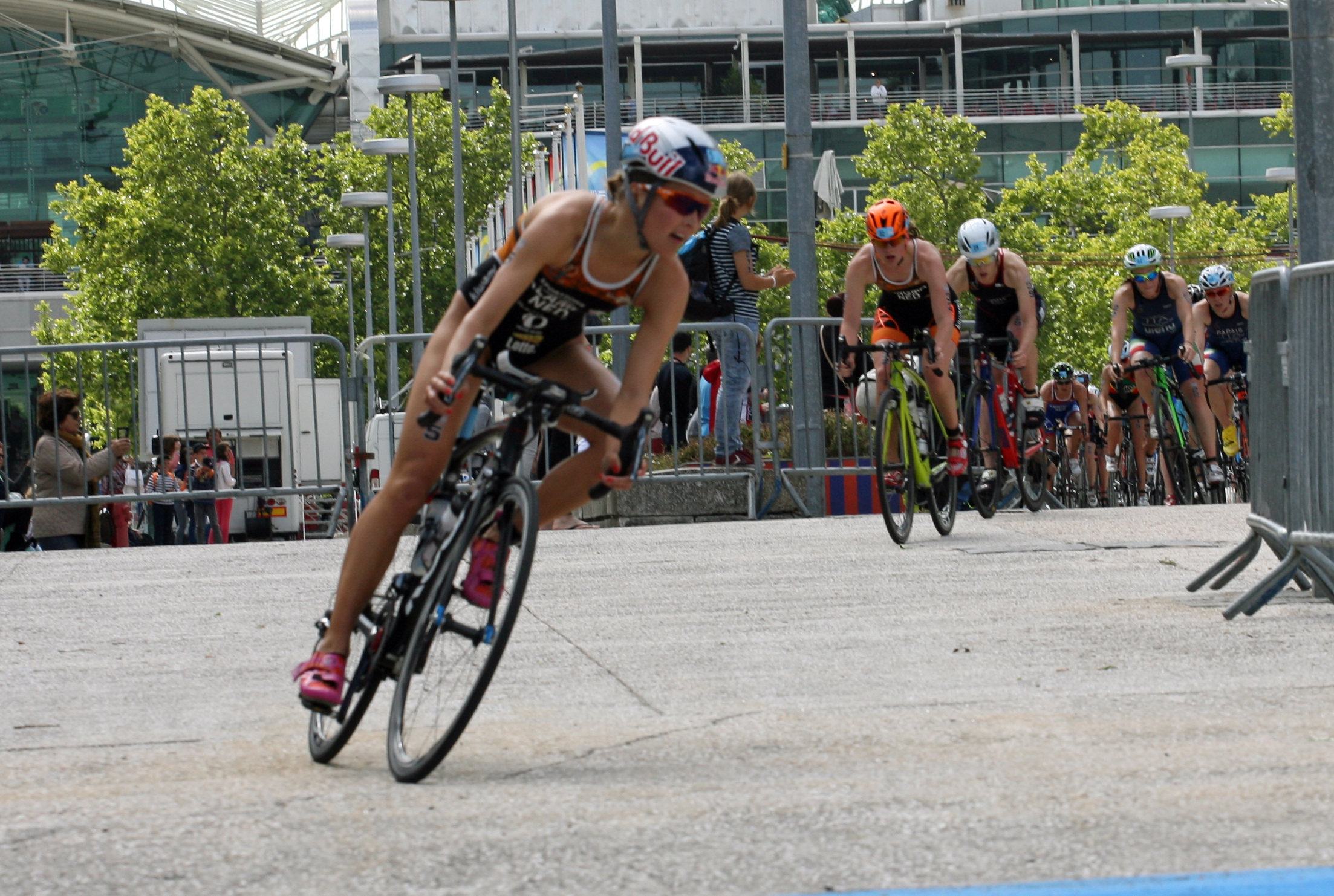 Eventually it was Klamer who found the strength to escape the chase pack and get alongside Hall but a puncture forced an early retirement for her, despite using the Wheel Station. She had lost too much time and saved her energy for another day.

After a lot of attempts of breakaways in the pack it was GB’s India Lee who managed to bridge the gap up to Hall. Lee, winner of the incredibly tough Cagliari World Cup event, easily one of the toughest bike course on the circuit with 100m of climbing each of the 4 laps, showed everyone that she could bike and run. But with Cagliari being a sprint distance event, just what was going to happen on this longer distance? The two worked hard and established a commanding lead as they entered T2. Lee had clocked the fastest bike of the day by bridging that gap between the chase pack and Hall and between them there was now only the 10k to secure the two top places on the podium. Could the Brits do it?

Lee was pushing the pace and slowly Hall seemed to flag. Her early hard work on the bike was taking its toll and then Lee was out on her own. Back down the field others were beginning to pull forwards and seemed to be catching the Brit. Frintová was looking fresh. Zofia Kovács HUN was running smoothly but Yelistratova, with an incredibly fast tempo, was making her way past athlete after athlete after having a tough swim. As the race neared its conclusion Lee’s lead looked under serious threat. The massive lead she had was reducing. One lap to go and it was just under 40 seconds. Could she hold on to win the most important race of her life? Would Yelistratova, with all her experience and power on the run have enough to catch her?

Entering the MEO Arena for the bell, she broke away from the others and left Kovács and Frintová for the final 1.25k. Click here for the bell lap.

The stadium was getting closer for Lee but behind her the Ukrainian was gaining.

As Lee entered the stadium she knew she had done enough. With tears streaming down her cheeks, she could enjoy that moment on the blue carpet, knowing that she had done enough. Lee is ETU European Champion. Yelistratova, with her husband, Vladimir Turbayevskiy’s advice of “just relax and enjoy it” in her mind had done just that and her run, the fastest of the day, had taken her to silver. Bronze went to Hungary’s Kovács as the crowds still screamed out to the athletes. The noise in the stadium was deafening and it is certainly a moment that every one of these medal-winners will remember. Lee was jubilant after the event, “It feels amazing to be European Champion although I am not sure it’s sunk in yet. I came out the swim behind the main group and worked really hard on the bike to get back to the lead group before pushing hard on the run for the win. On the third lap, I really began to feel the effort I had made on the bike! It was great racing here in Lisbon, there were so many British age-groupers around the course, the support was amazing. There is a great atmosphere around all the athletes and support staff here, a really strong team spirit.” 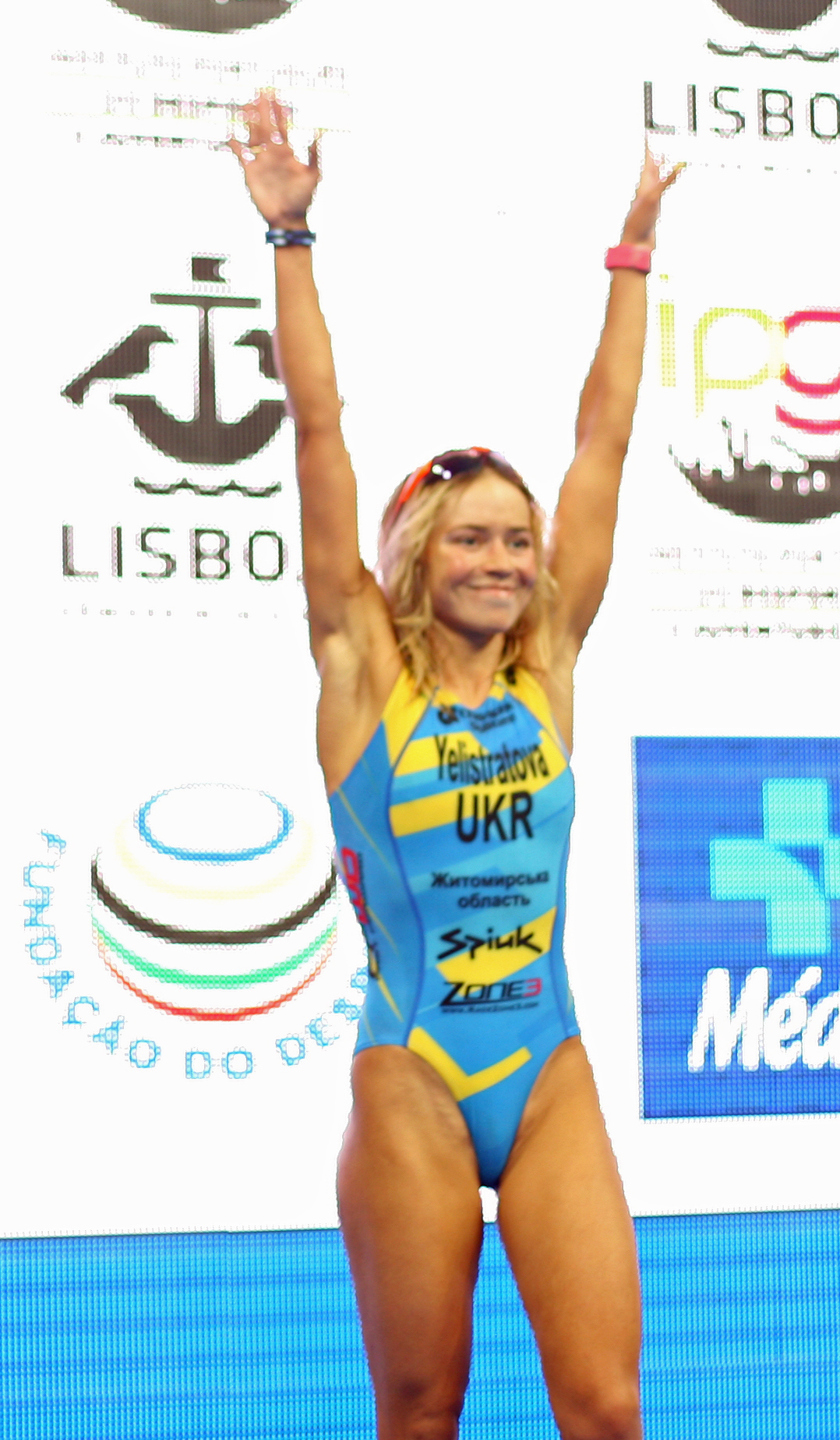 For Ukraine’s Yelistratova, “So excited with my first women’s Elite European Championships podium! Thankful to my husband and coach Vladimir Turbaevskiy for great preparation and right pre-race spirit! Grateful to my sponsors for their important and consistent support! Thanks Filipe Pereira and Cecilia Frascaroli for really nice photos! And to my friends and fans from all around the World for following Lisbon event and cheering! Dreams come true!”

An amazing race - words cannot replace the atmosphere that was at the Finish. 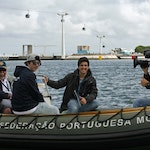 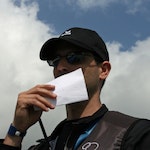 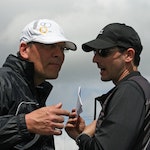 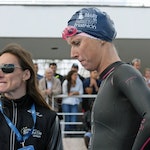 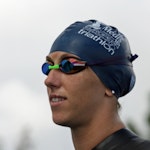 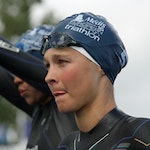 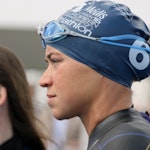 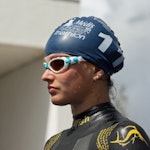 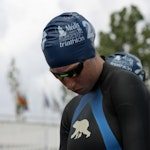 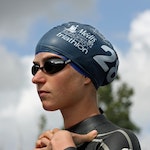 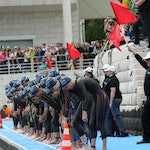 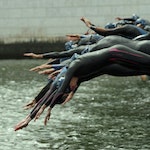