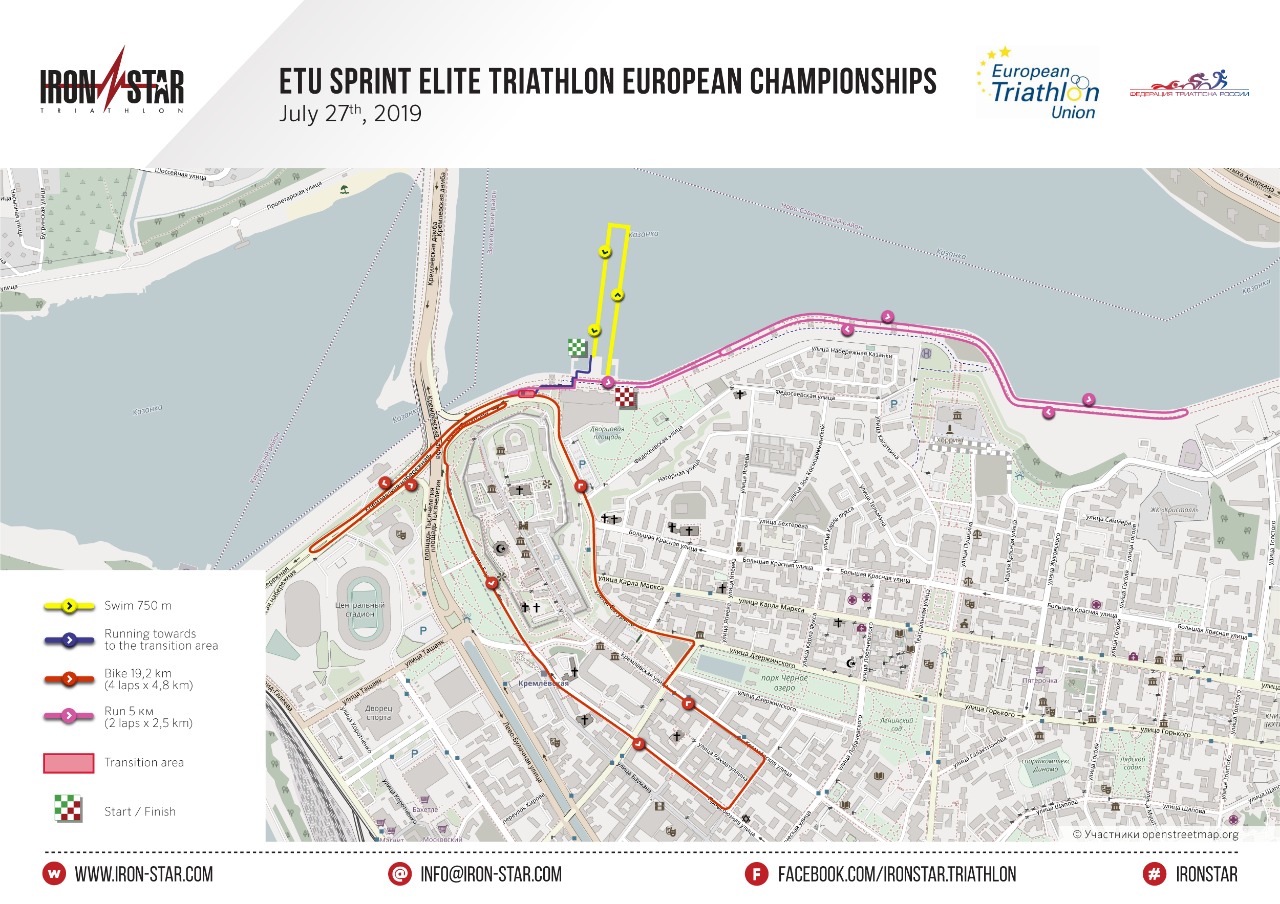 Kazan delivered a magnificent race today with excitement in both races. With the water and air temperature high enough to see the athletes race without wetsuits and with the stunning backdrop of Russia’s City of Sport, we were treated to a visual experience second to none as the athletes swam the 750m loop in the Kazanka, before lapping around the Kremlin four times, to finish with a two-lap pan-flat run. 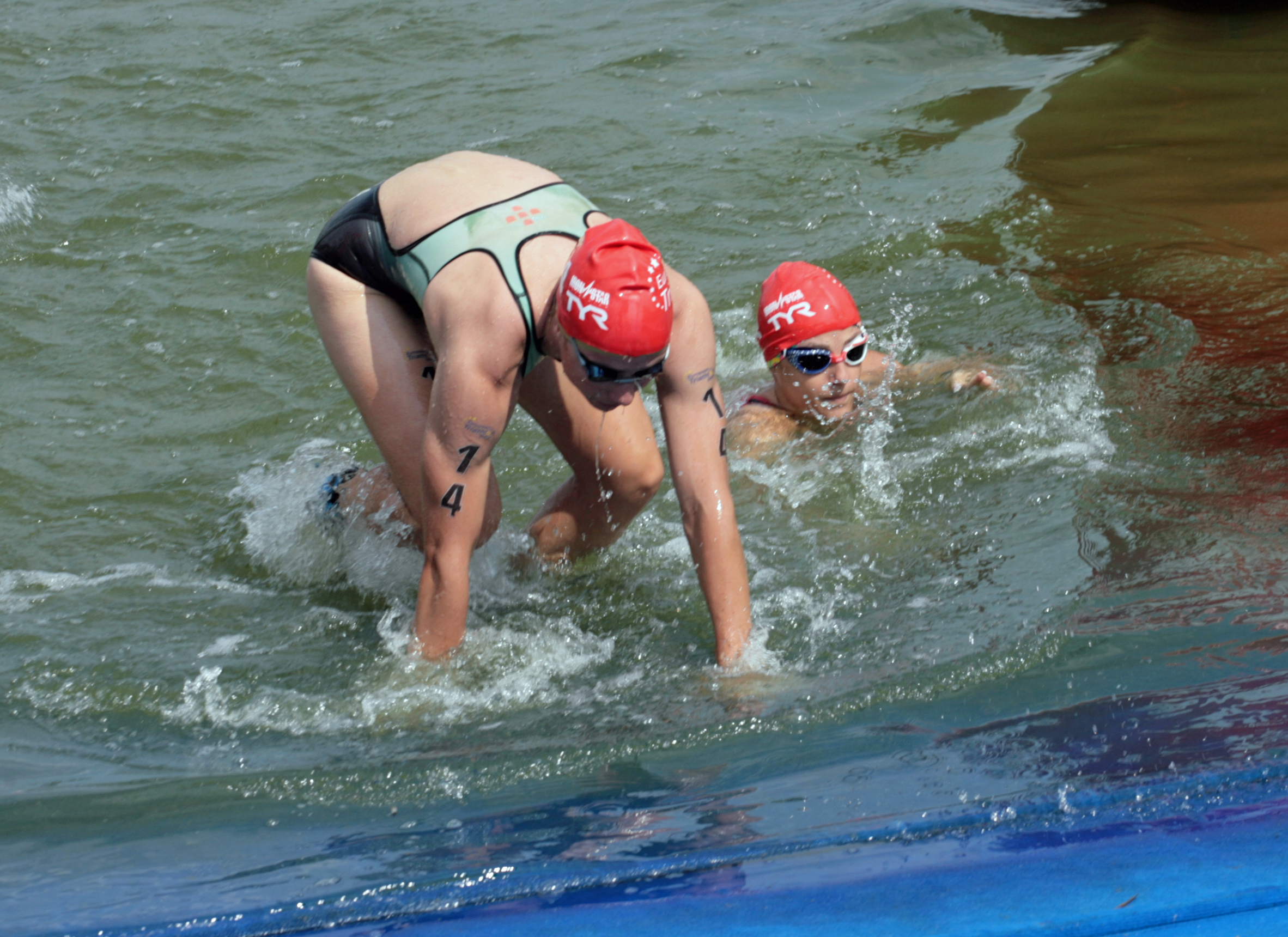 It was the women who raced first and as expected, it was Portugal’s Vera Vilaça who captured the attention of the TV crew as she led the swim with powerful strokes. Her power in the water is now well-known amongst the other elite women and it was no surprise to others fight for position in the swim so that they could find that draft position behind her feet. Anastasia Abrosimova RUS edged close and along with Petra Kuříková CZE and Ivana Kuriačková SVK, that early lead in the swim that is vital to getting a good position on the bike was taken.

Vilaça continued to apply the pressure by escaping from T1 and making good her escape. 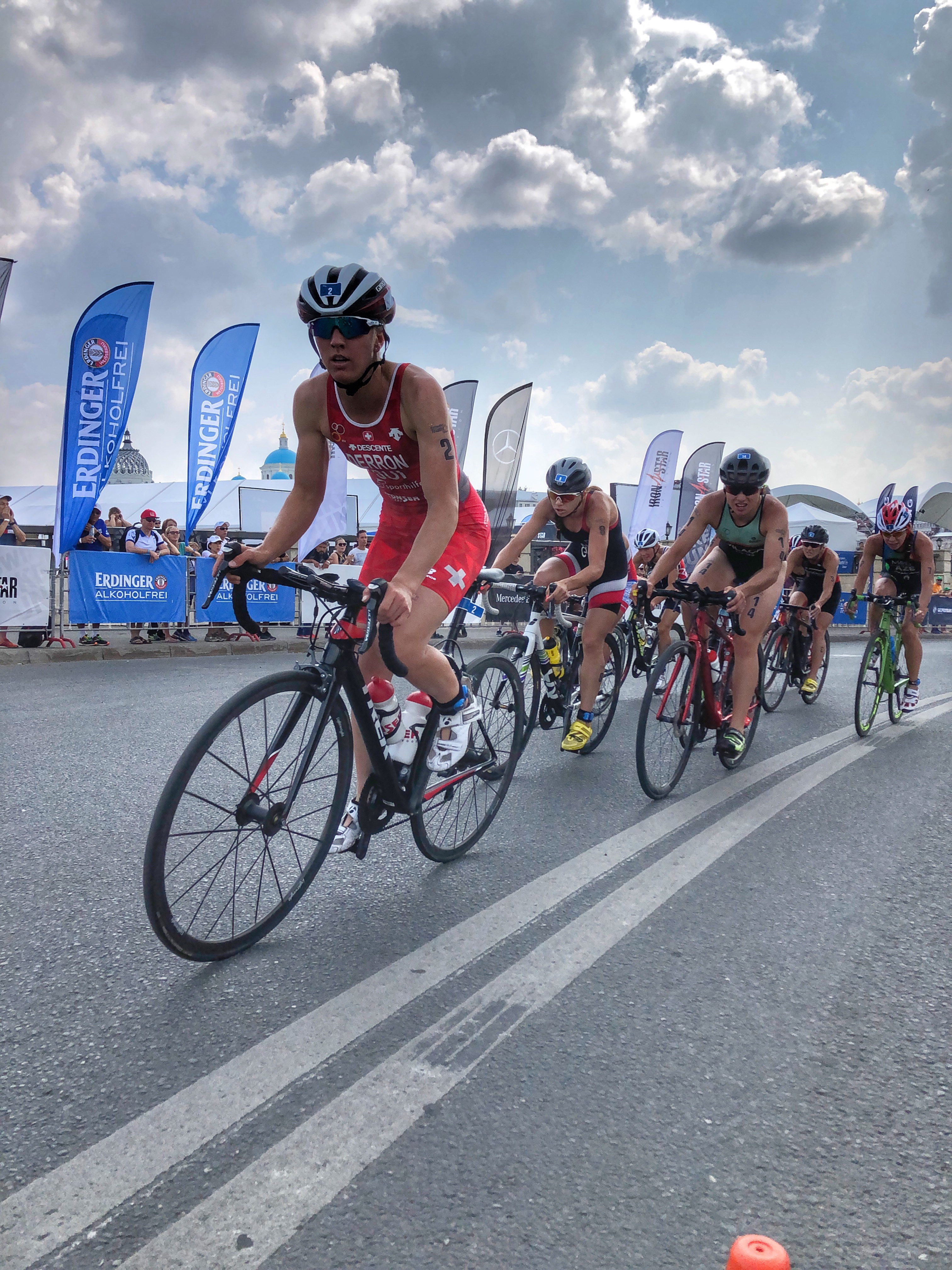 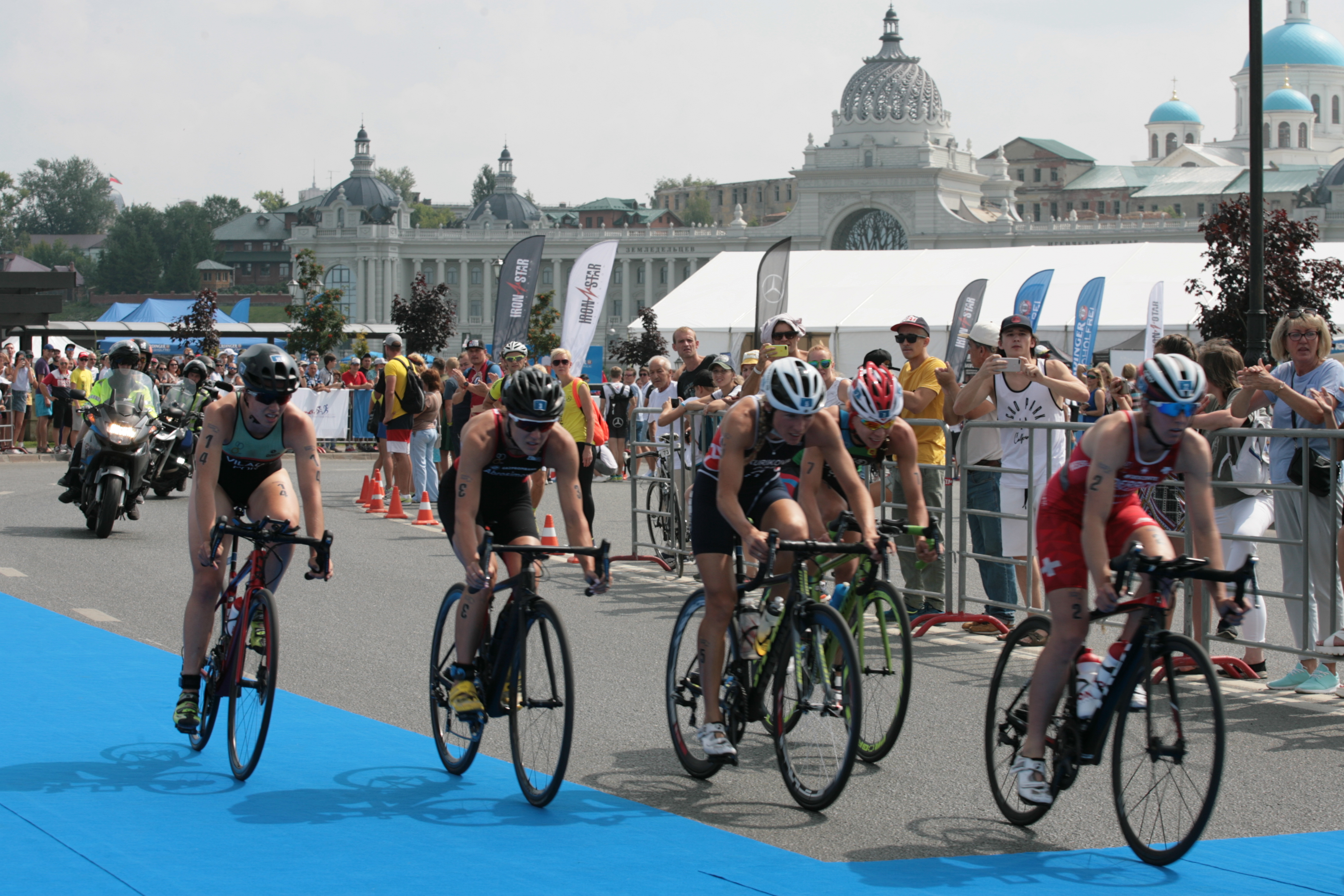 Once formed, this peloton worked well together to build the pace and to create the gap that was needed to keep the medal chances within away from the chase pack. 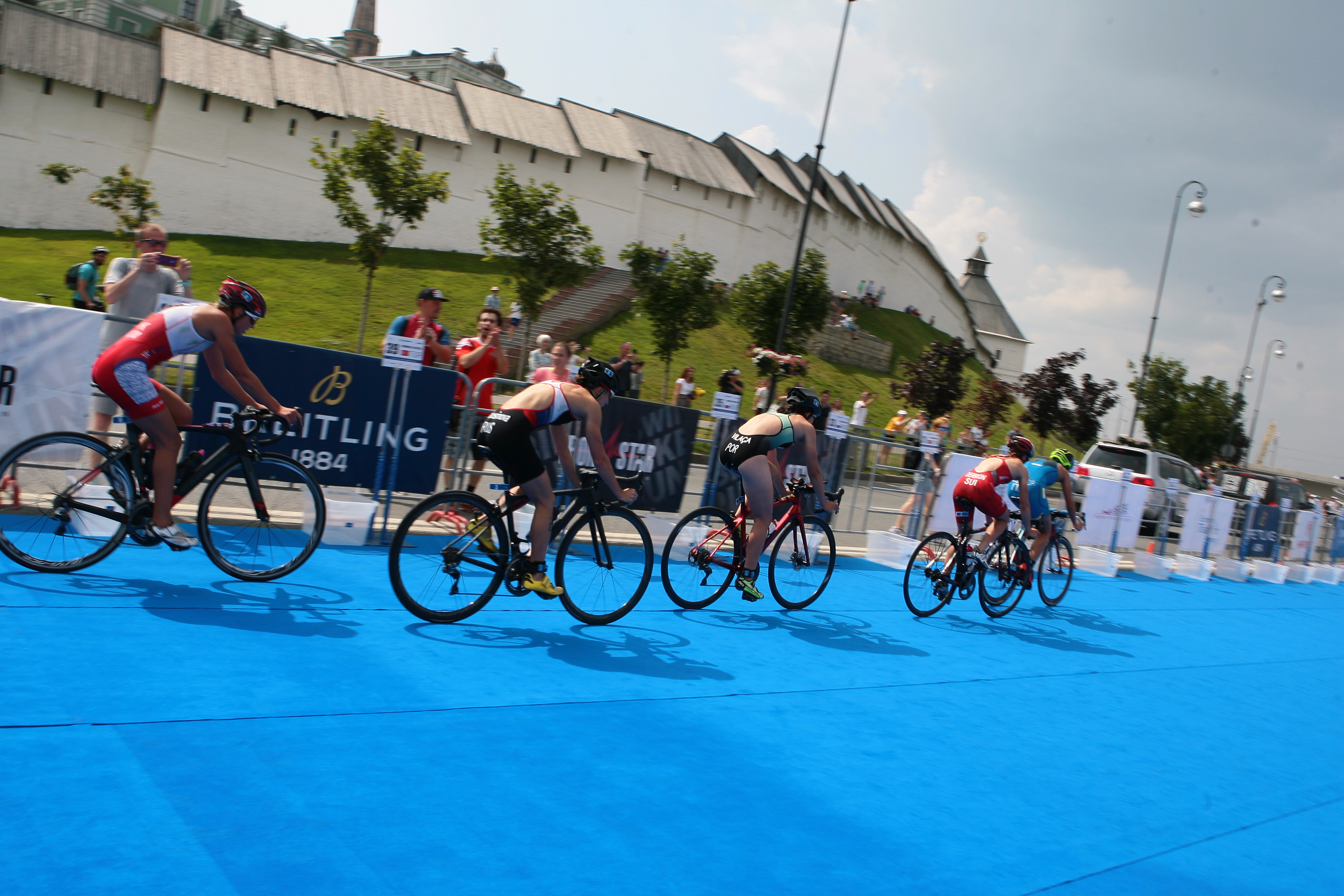 The four laps around the Kremlin seemed to fly past and soon enough it was all eyes on the dismount line. Derron was well-placed but it was Missaglia who escaped out onto the run course, with Derron and Kuříková breathing down her neck. 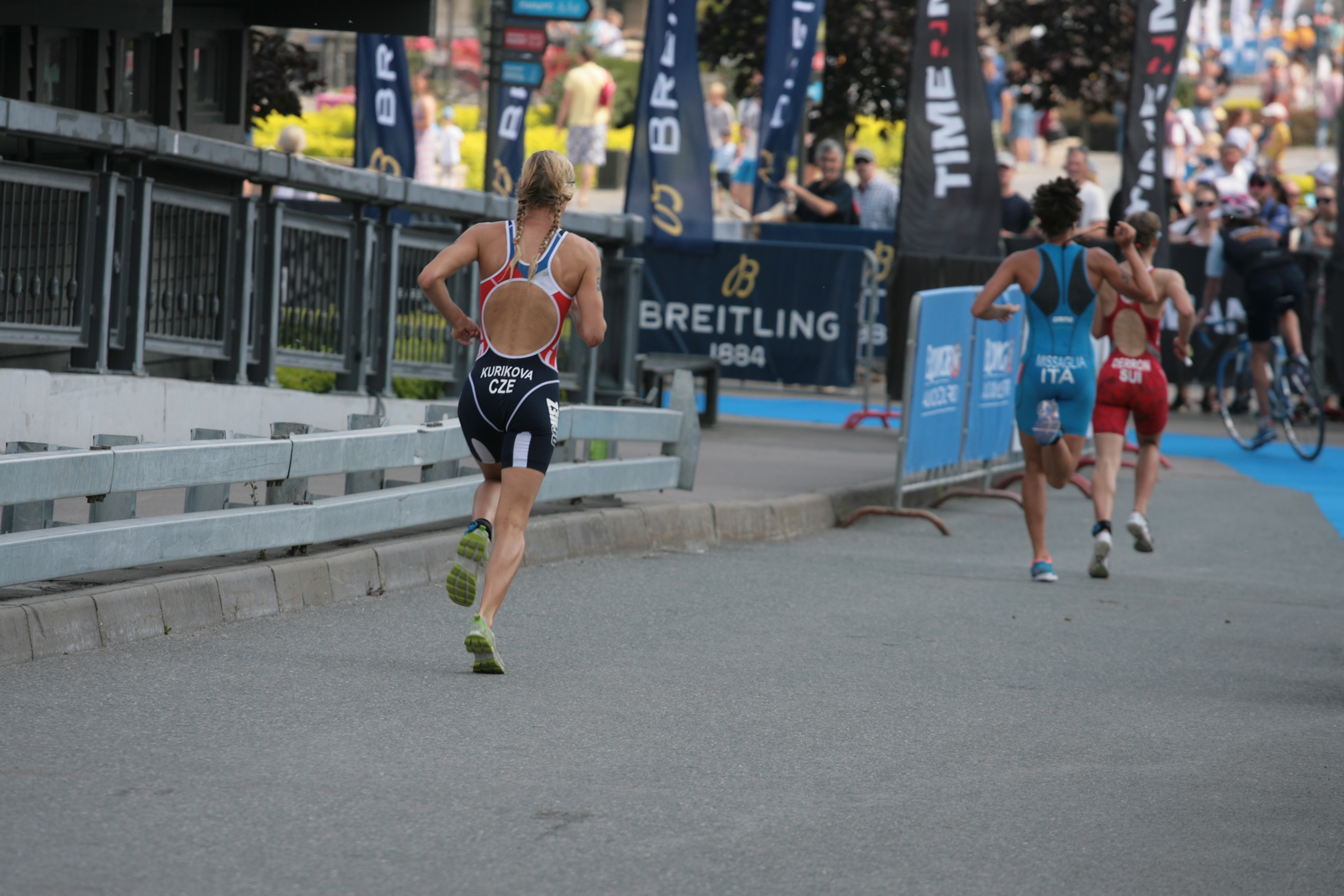 Derron moved ahead but Missaglia kept close. Kuříková watched and waited but not for long. 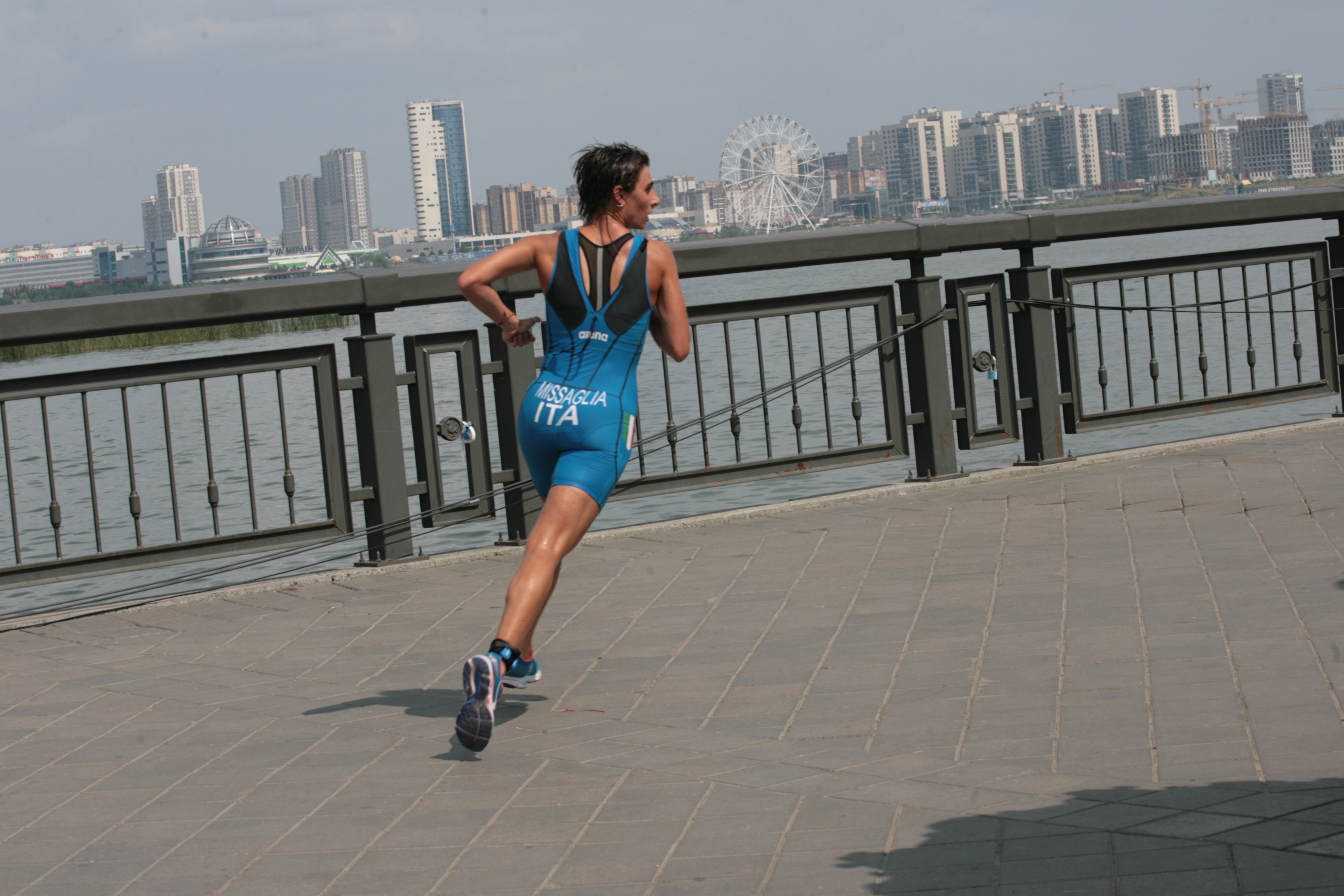 The Italian athlete did well to stay with Derron and Kuříková but their pace was taking them away from her. At the far end turn point, Derron applied just a little more pressure and was able to escape from Kuříková. It was now looking seriously possible that she would be claiming this title to add to her U23 win last year in Eilat.

Derron’s run power was impressive and half-way into the run it was obvious that she was going all the way to gold. Behind her Missaglia’s grip on the silver medal was lost and Kuříková was now looking good for the second place on the podium. Missaglia has had good results as a junior and has only just moved up to race against the senior athletes. One of the youngest athletes here today, she was having the race of her life and looking good for a medal.

With one lap down and one to go, Missaglia looked certain for bronze but then, having come out of the water over 30 seconds down and having worked hard in the chase pack on the bike, it was Spain’s Tamara Gómez Garrido who was storming past the athletes in front of her. 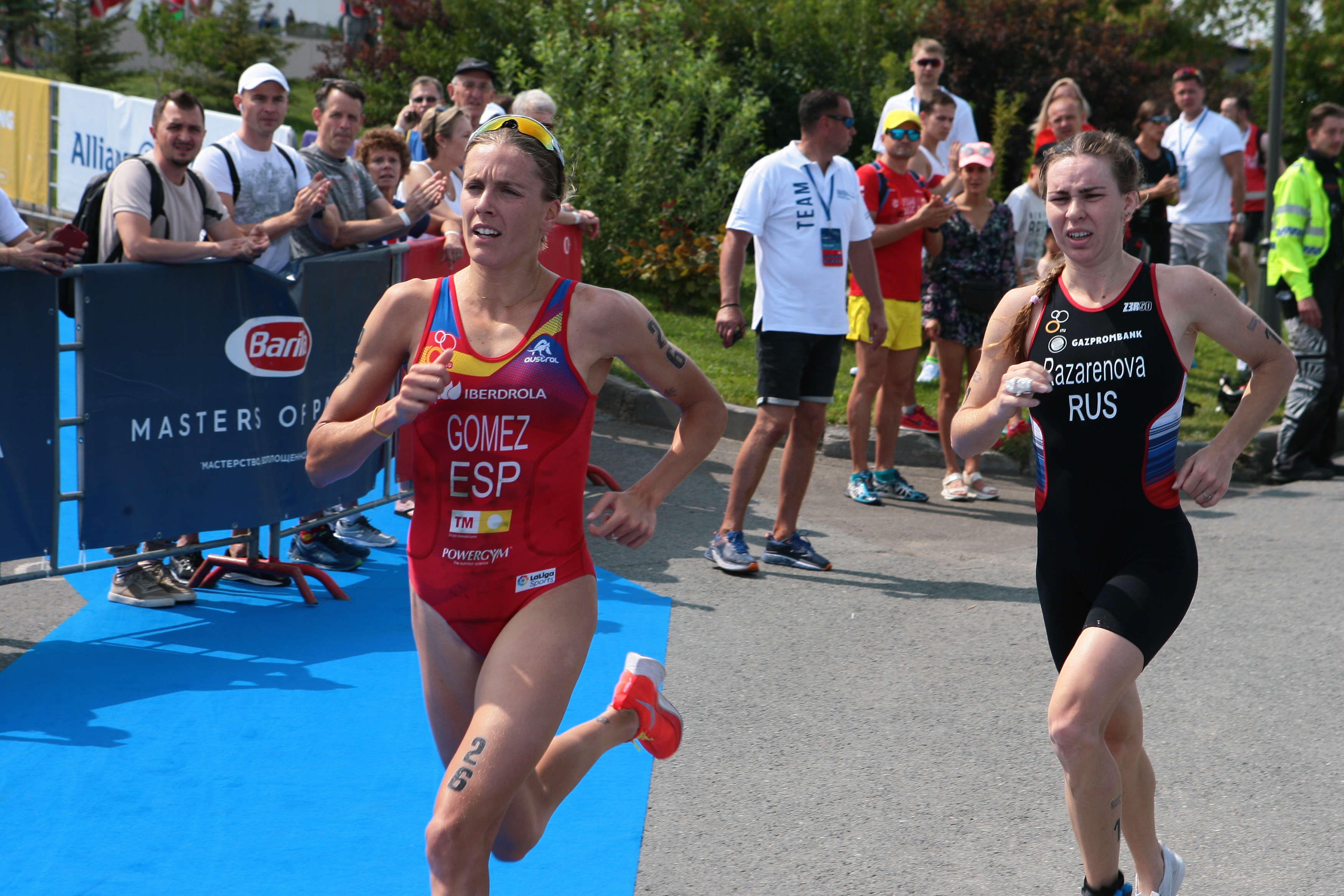 One by one, they were passed by the speeding Spaniard and suddenly she was on Missaglia’s shoulder and in a flash had gone by. A sideways glance from the Italian was enough to show that she could not answer this pace and her medal chances were snatched from her.

Back at the front and to the cheers of the hundreds of people along the finish area, Derron took the high-fives and with the biggest smile, grabbed the well-earned finish tape and the title, European Champion. 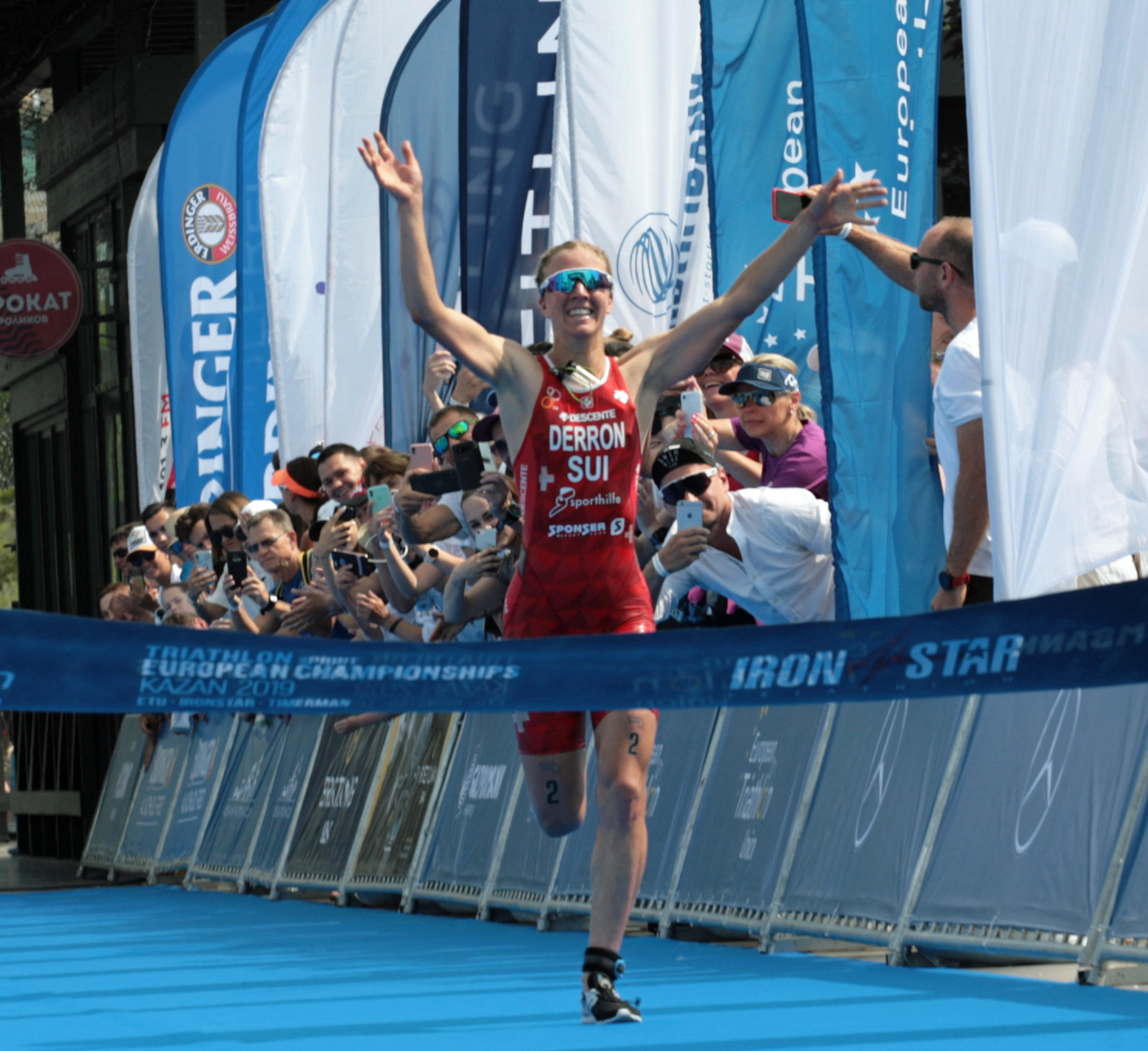 Behind her, Gómez was looking like a serious threat to Kuříková but the Czech athlete held onto silver, with bronze going to Spain.

For the host nations, Abrosimova came home in 5th but then Elena Danilova and Yuliya Golofeeva claimed the last top ten places with 9th and 10th respectively. 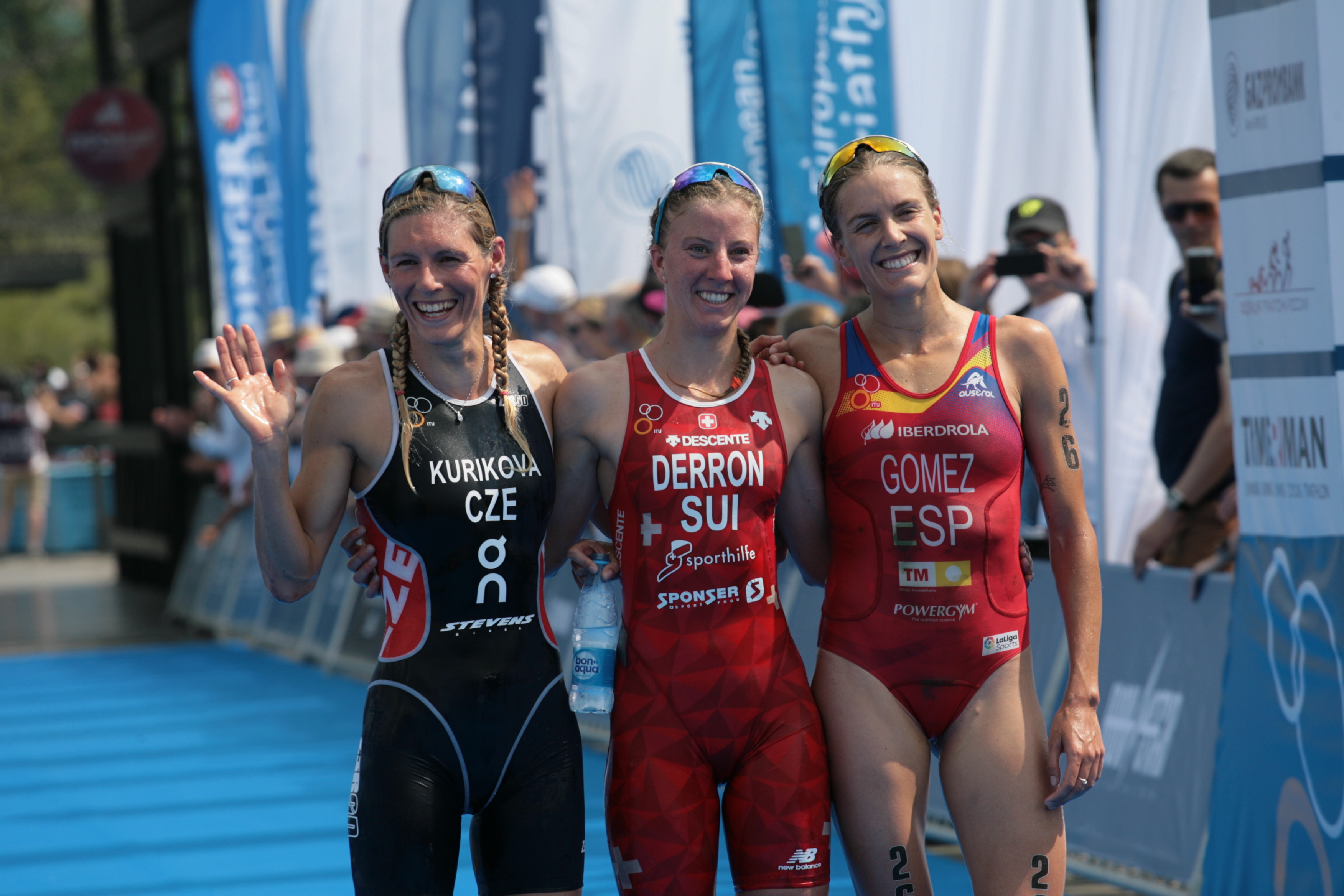 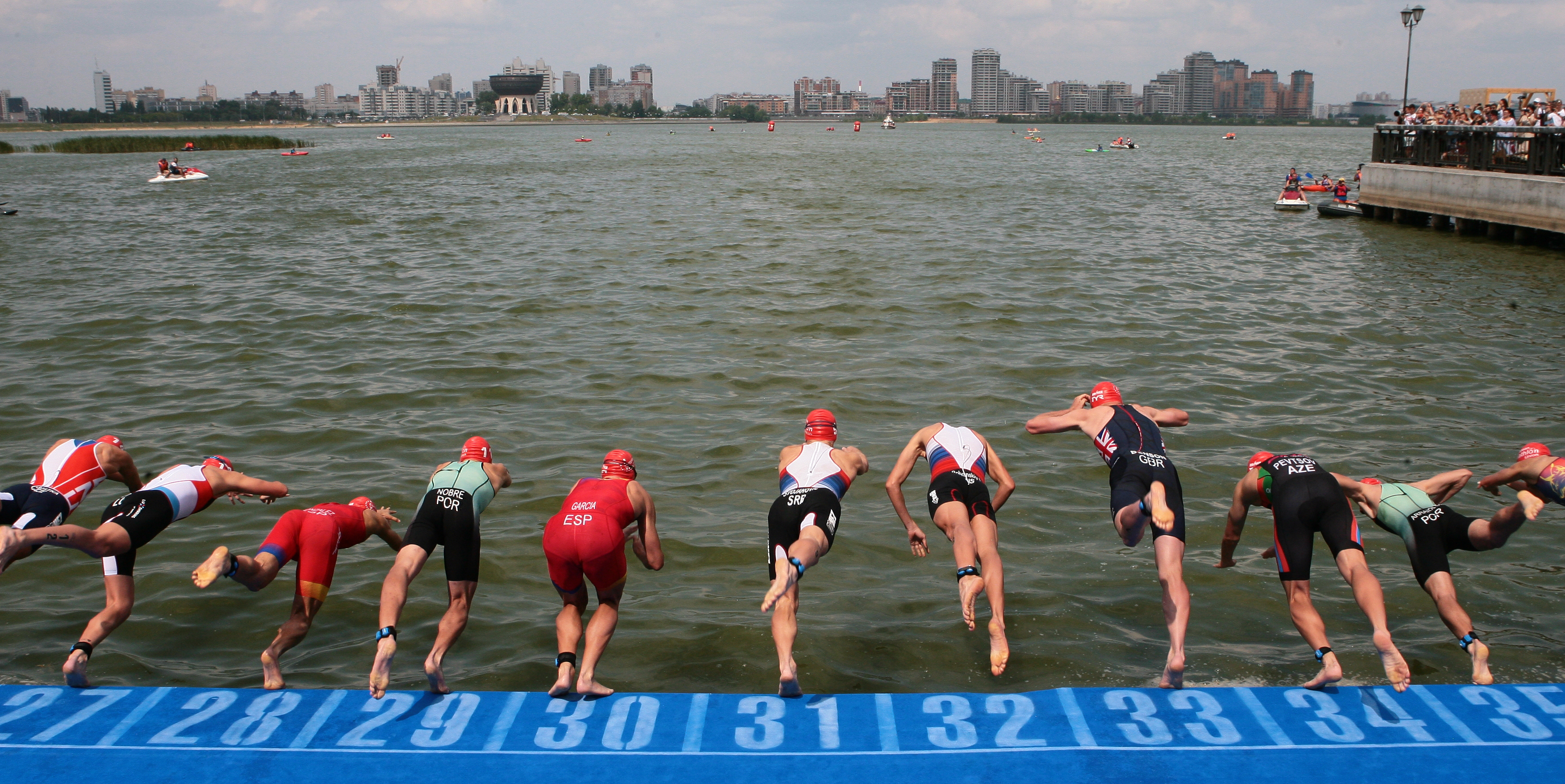 As expected, Igor Polyanskiy RUS, led the swim in quite choppy conditions, as the winds had now picked up to make it a real challenge out in the water. He was first onto the swim exit ramp but Lukáš Červenka CZE edged past him on the long run to T1. 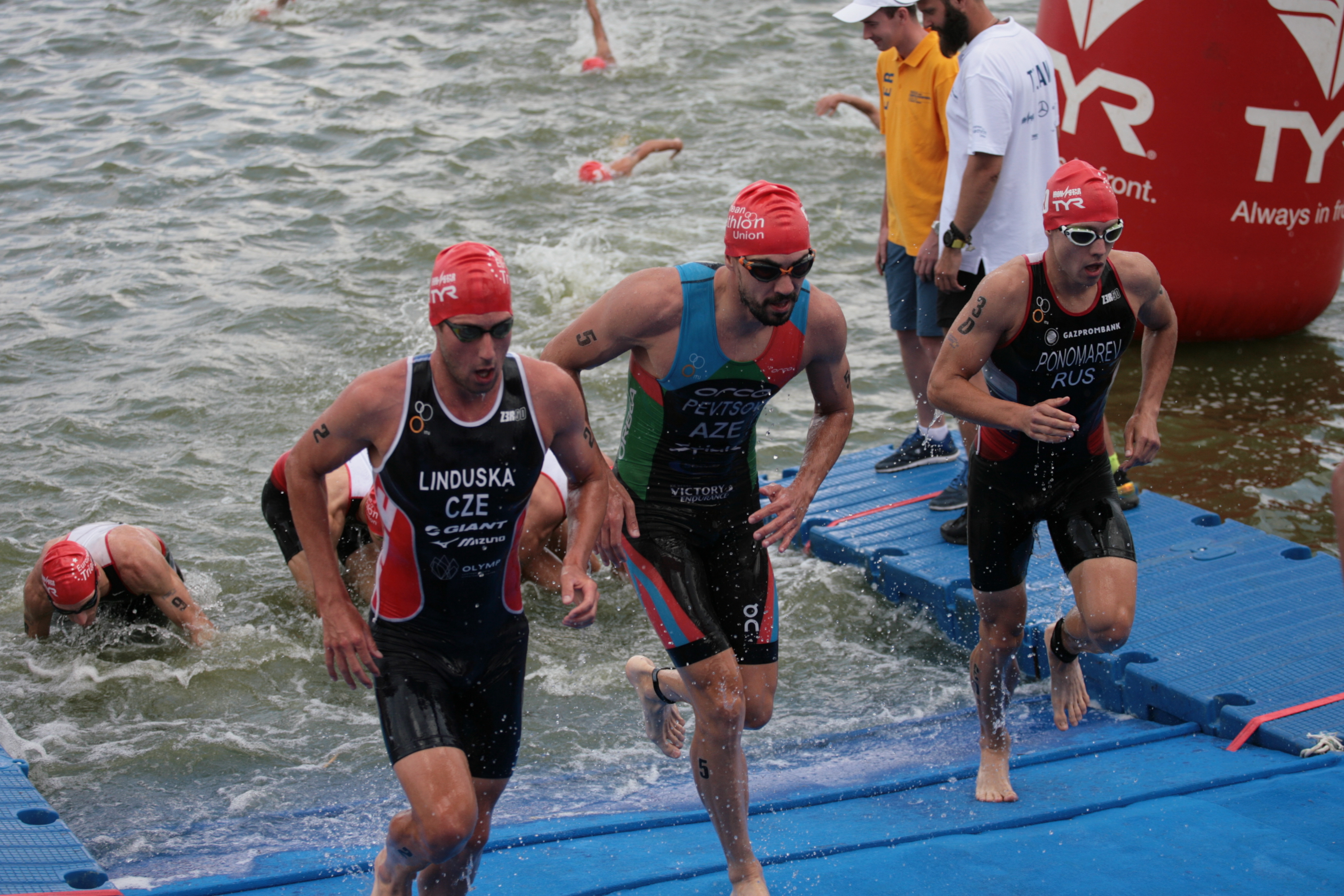 It was tight as the chasing athletes exited the water. Each and every one of them so very aware that they needed to be in that leading pack. 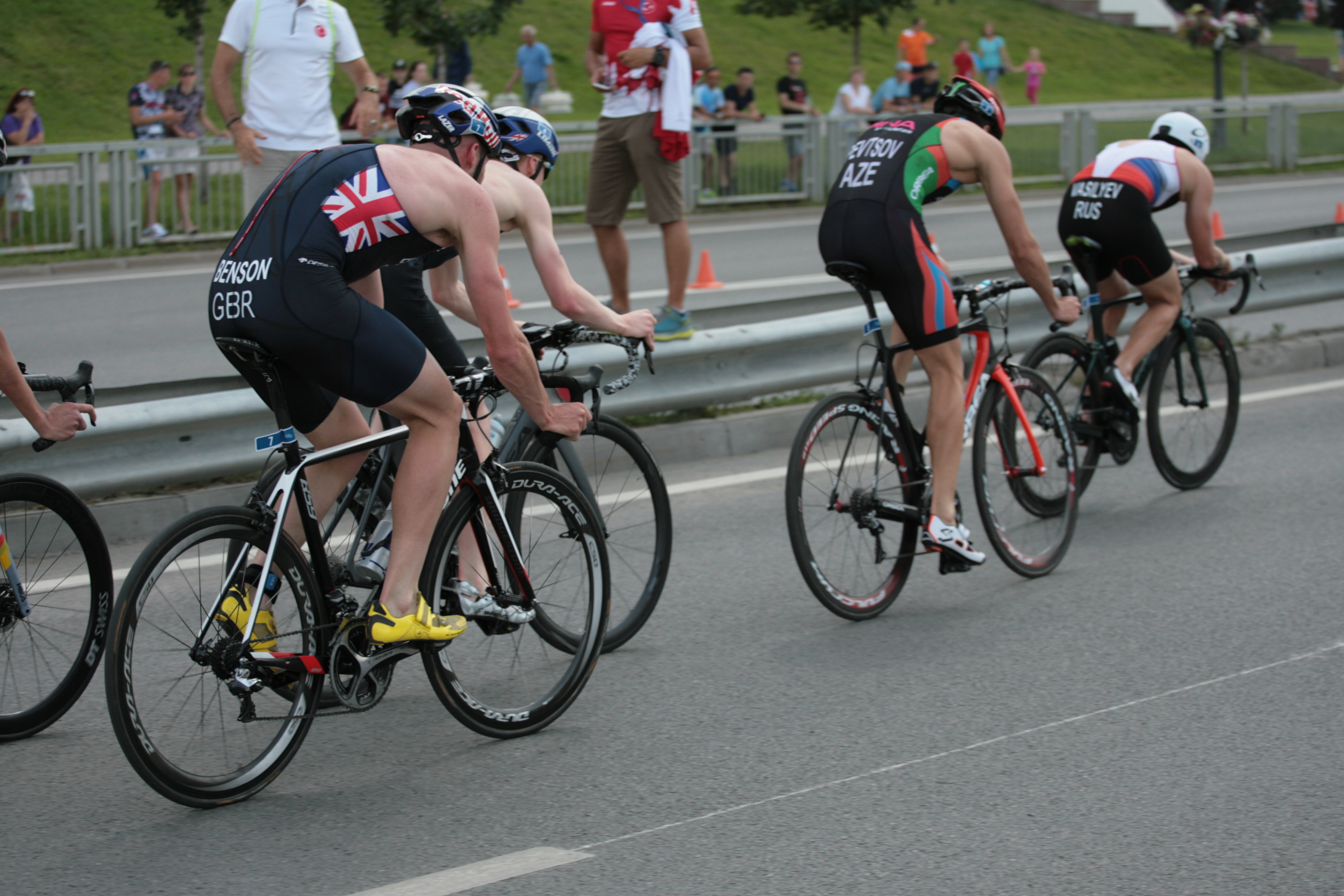 Out onto the bike and soon enough a leading group of athletes had established a pack that would move powerfully around the 4-lap course. Červenka was dropped. Both British athletes, Sam Dickinson and Gordon Benson were present and they tested the others early on, with breakaways that were responded to by the pack. 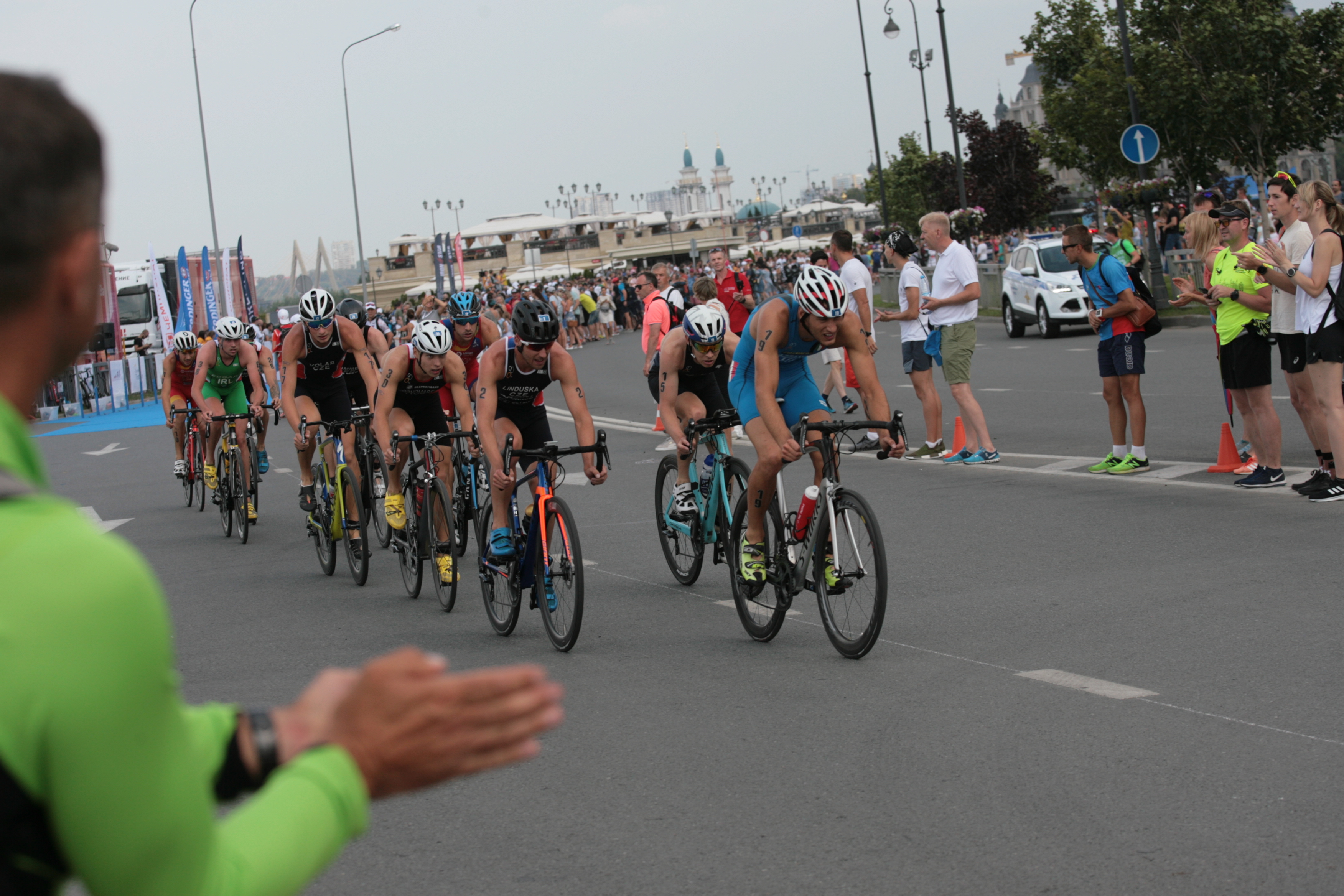 The chase pack could do no more than chase.

Having settled into a good pace, the pack of five started to work hard to keep their advantage. Lots of communication ensured that everyone took their turn at the front. Rostislav Pevtsov AZE and Denis Vasiliev RUS made up the leading group. Their pace was high. They attacked on each turn and soon enough had created a comfortable lead that suggested all the medals would come from within this leading group.

With their feet released from their shoes, it was time for T2. Dickinson led them onto the blue carpet and, with Benson, was first out onto the 2-lap run course. This was going to be an interesting battle between them. 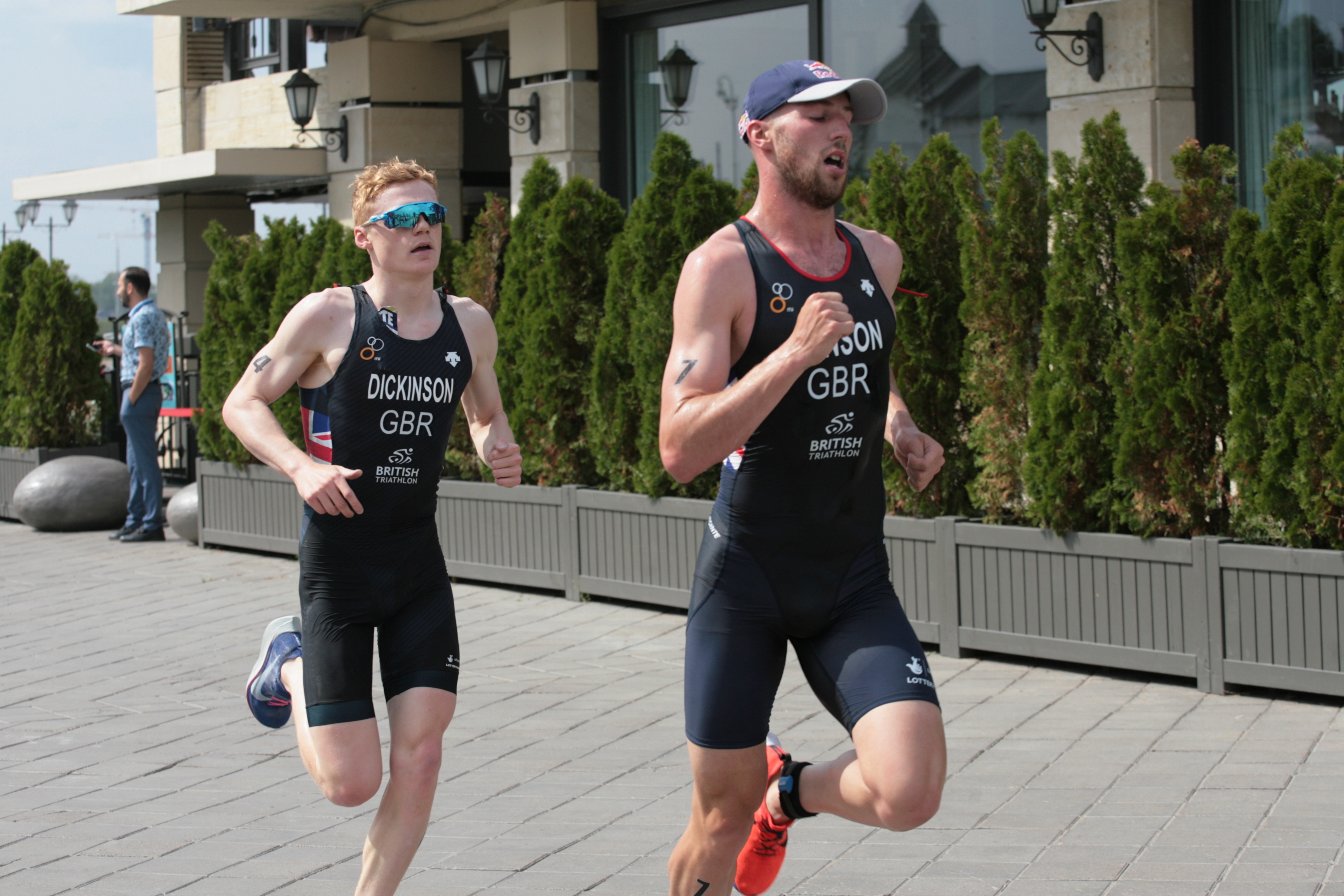 Benson was faster on paper but the younger Dickinson, with fewer races in him this year, is not one to give up that easily. 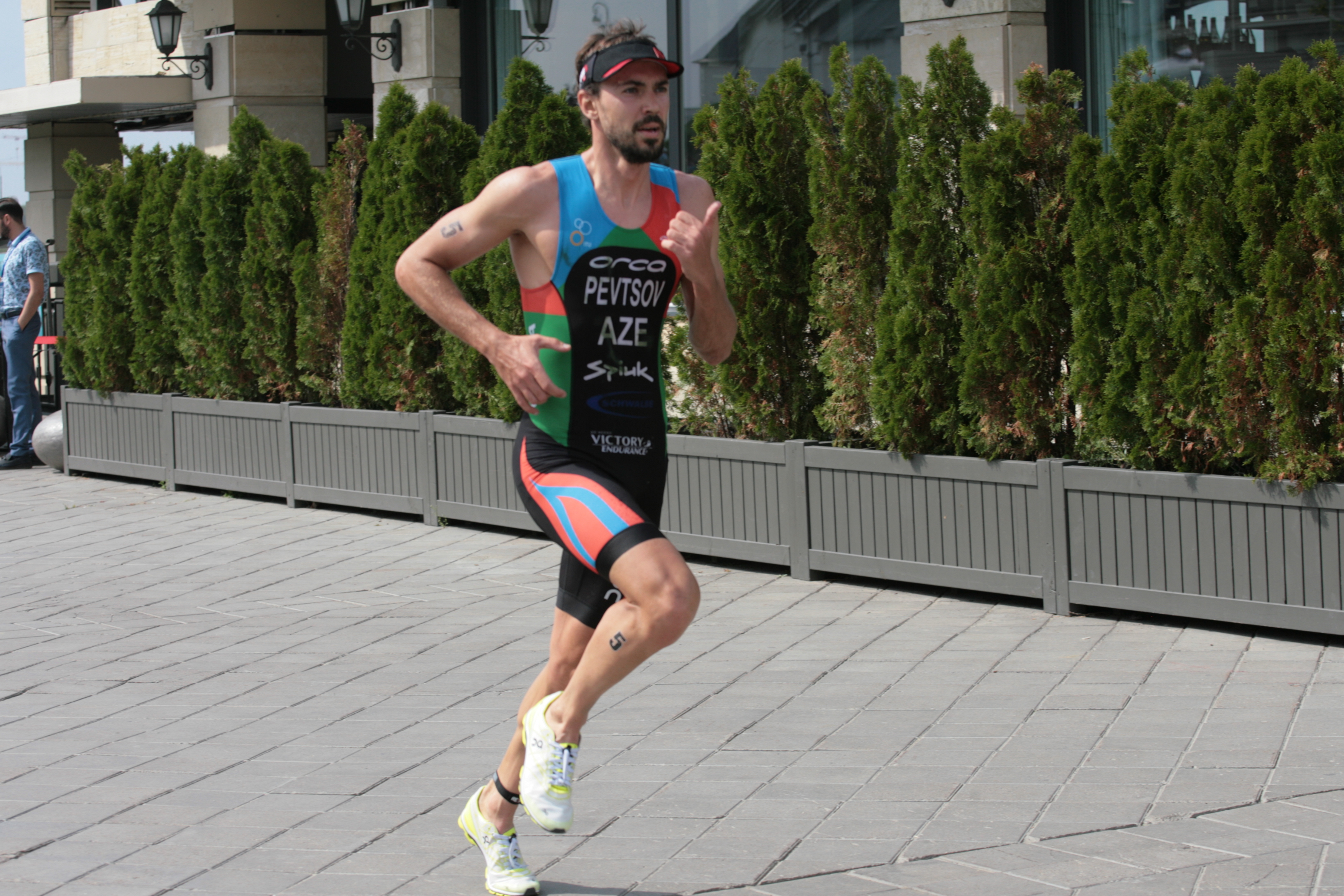 Behind them, the big threat was Pevtsov. He soon settled into position, watching the two British uniforms but seemed unable to respond to their early attack on the run course.

With the final turn complete and now a long, arcing run back to the finish line, the Brits were joined by an enthusiastic dog, who ran alongside but even he could not match the pace that really looked like to would take them under 15 minutes.

With 150m to go, it looked like Dickinson had accelerated but Benson, perhaps anticipating the kick had also upped the pace and the two athletes, shoulder to shoulder, pace for pace surged for the line. In the closing strides, Benson just got the advantage and grabbed the finish tape a split second ahead of Dickinson. 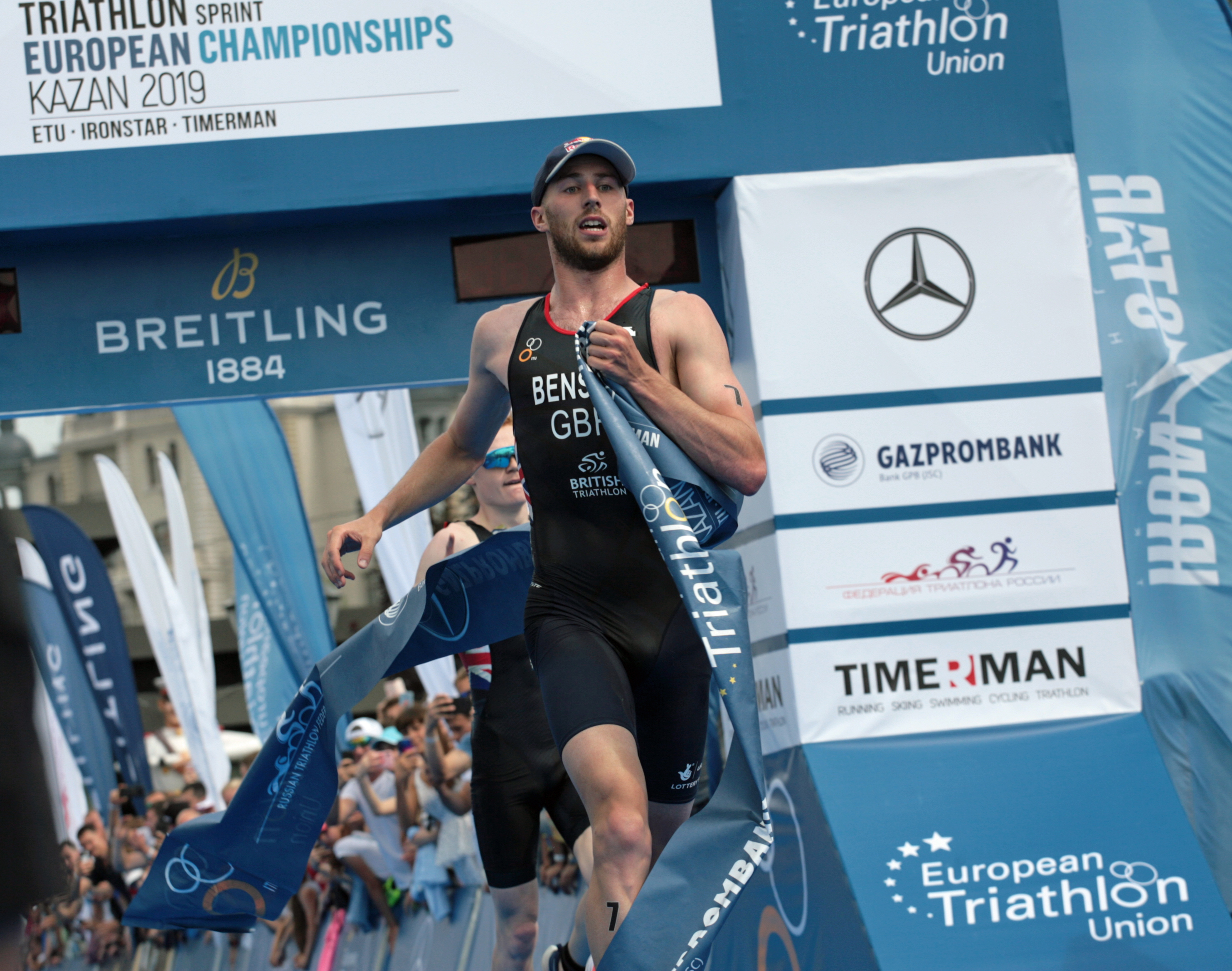 An amazing finish that delighted the crowds. It was indeed a bronze for Azerbaijan but the crowds had to wait for another 30 seconds until Pevtsov took the greeting from the two smiling British athletes.

For the Russian supporters, it was a top ten finish for Igor Polyanskiy, who placed 7th. 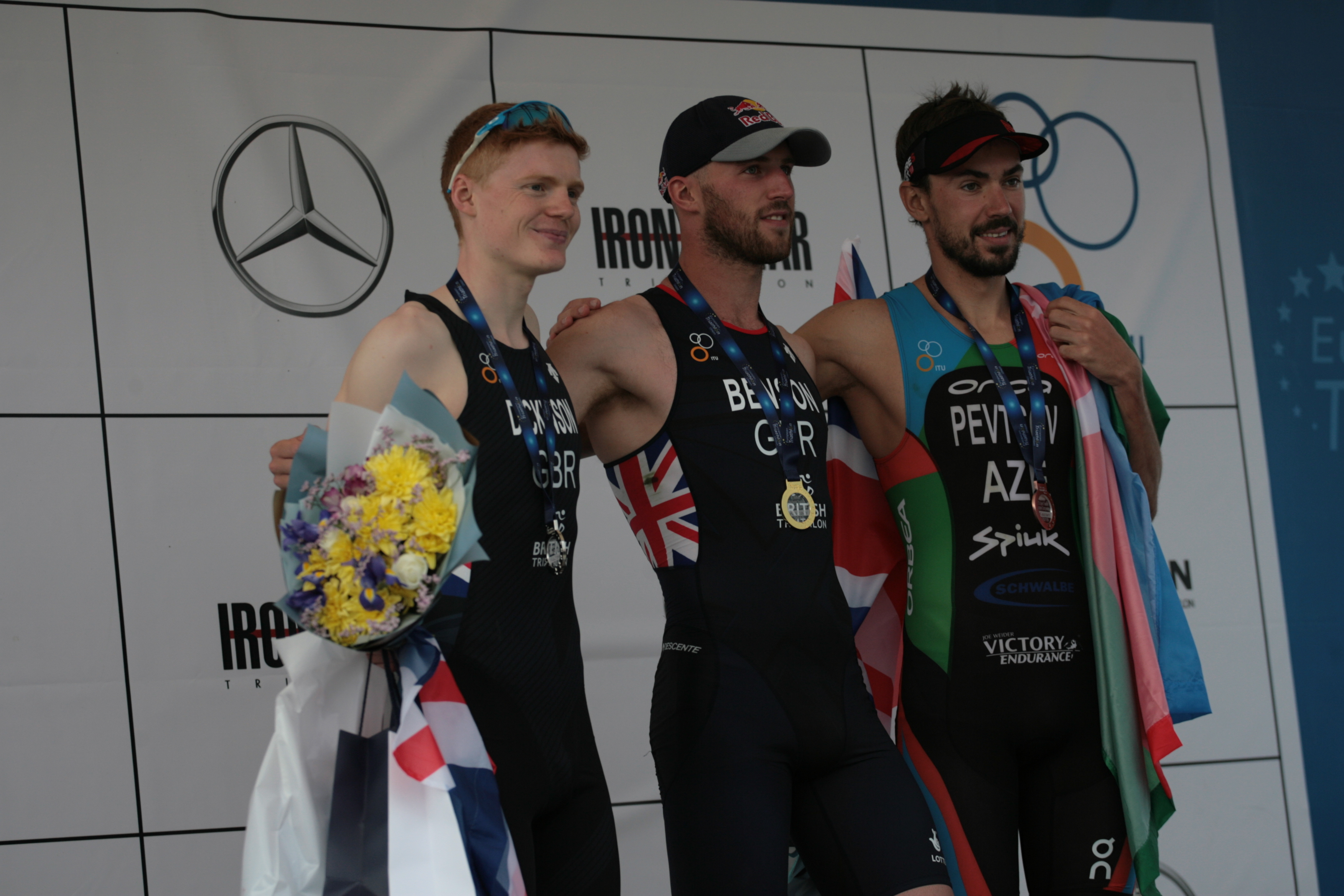 Two simply stunning races in a breath-taking location. Ironstar and the Russian Triathlon Federation have delivered one of the best championships. 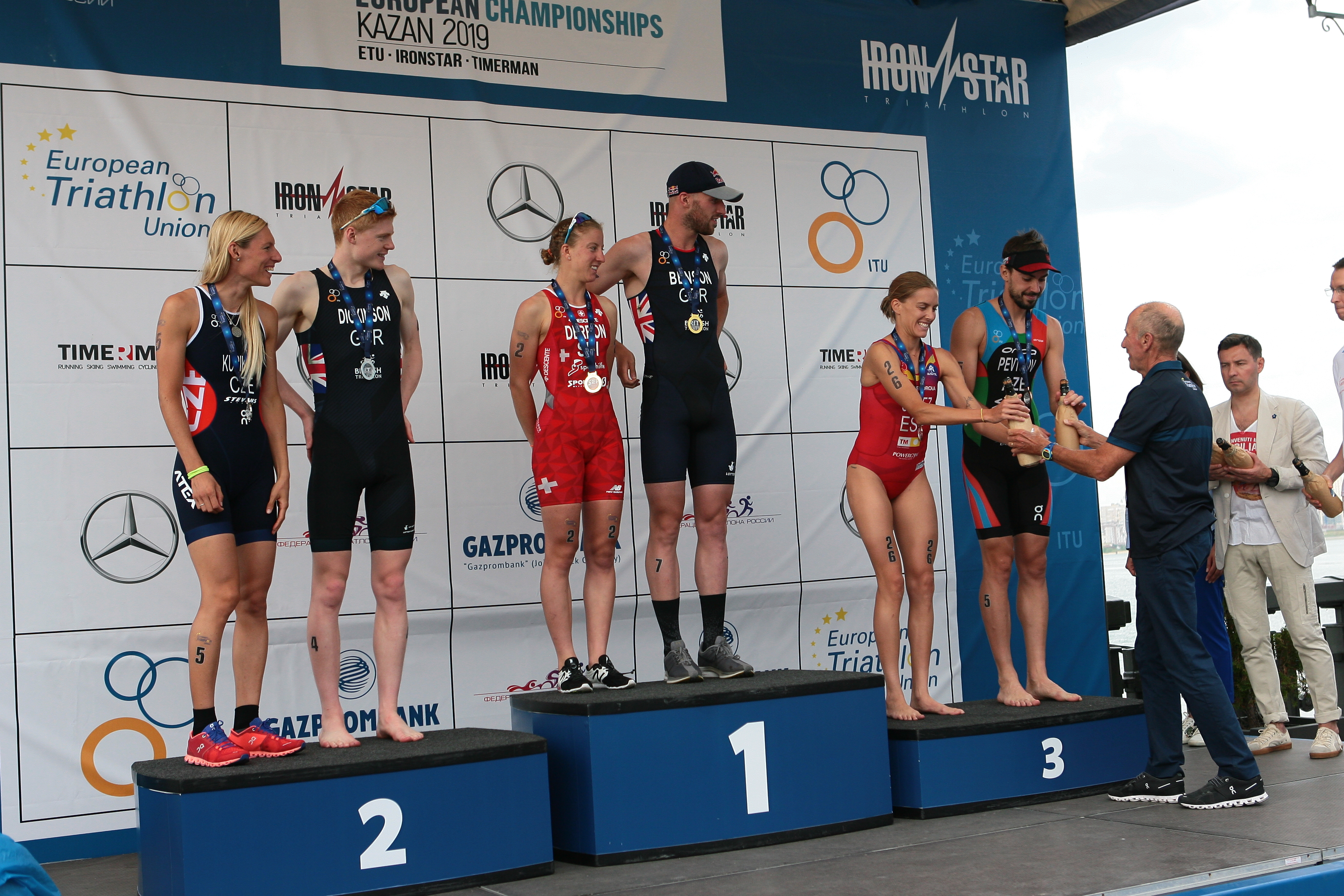 ETU President, Renato Bertrandi was full of praise after the event. Click here to see the video.

After the medals were presented and the champagne sprayed over the VIPs, it was time for the Age-Group athletes to check their bikes into the massive transition area that has been created for them. Those who were early missed the downpour that lasted for almost an hour. We are keeping an eye on the weather and crossing our fingers that any rain holds off until the Age Group races are over. An early start will see waves being set off in 2 minute intervals from 08:00hrs and we have just had it confirmed that the live TV coverage will be there for our races in the morning.