Austria and Australia get gold in Zagreb

Rain and wind was absent from the race in Zagreb and for the athletes and organisers, it was a wonderful day of racing.

For the Junior Women, the swim was led by Italy’s Bianca Seregni. 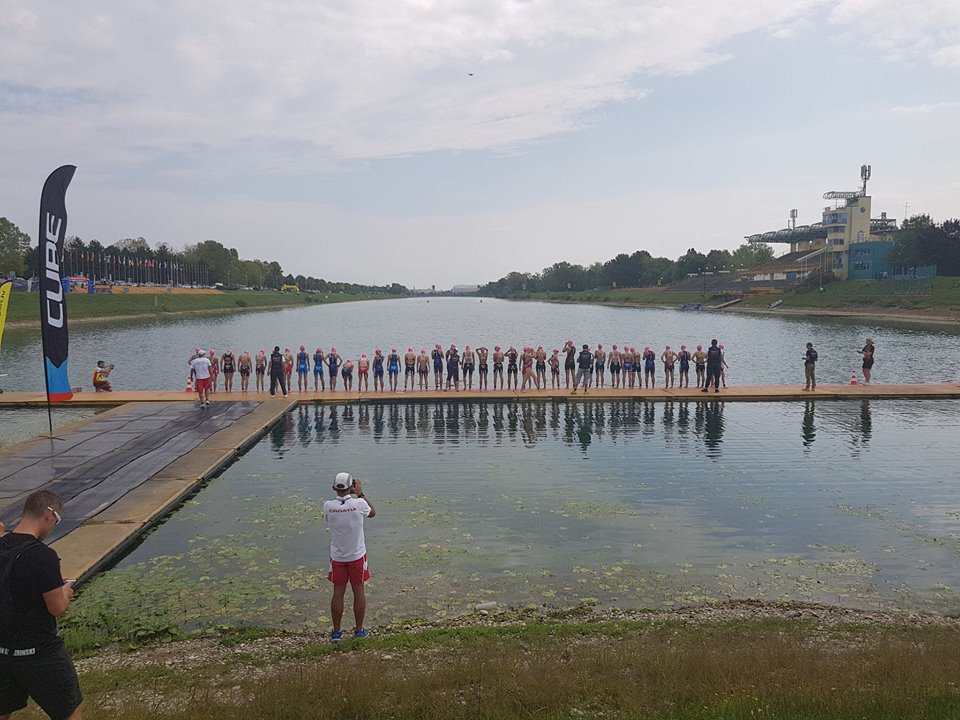 She created a massive lead over the chasing athletes and with the very short run into T1 from the swim exit, she was able to escape out onto the bike course over 30 seconds ahead of those chasing her. 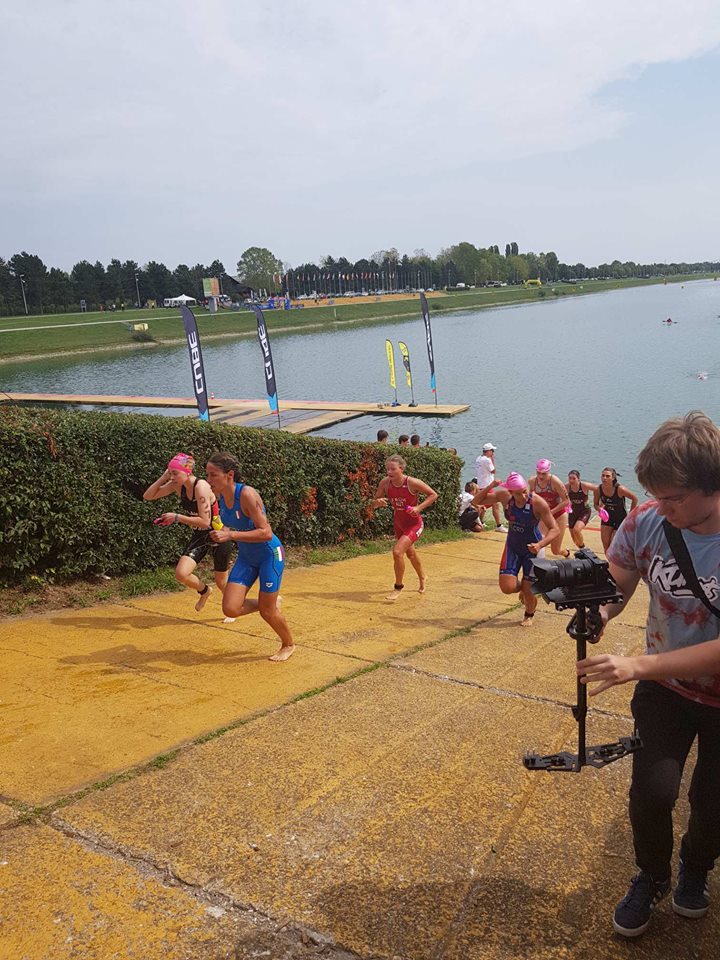 The Tabor winner, Russia’s Valentina Riasova has shown great finishing pace and, tucked in behind Poland’s Marta Sikora, looked to be in a good position. Race favourite, Dorka Petrov HUN was not so far back and the threat from the Austrian team was almost a minute off the lead as Magdalena Früh ran up to take her bike.

Soon, out on the bike course, a group of ten were pushing hard to maintain control over the race and a lead over the chasing athletes. In that group were Früh, Riasova and Petrov. 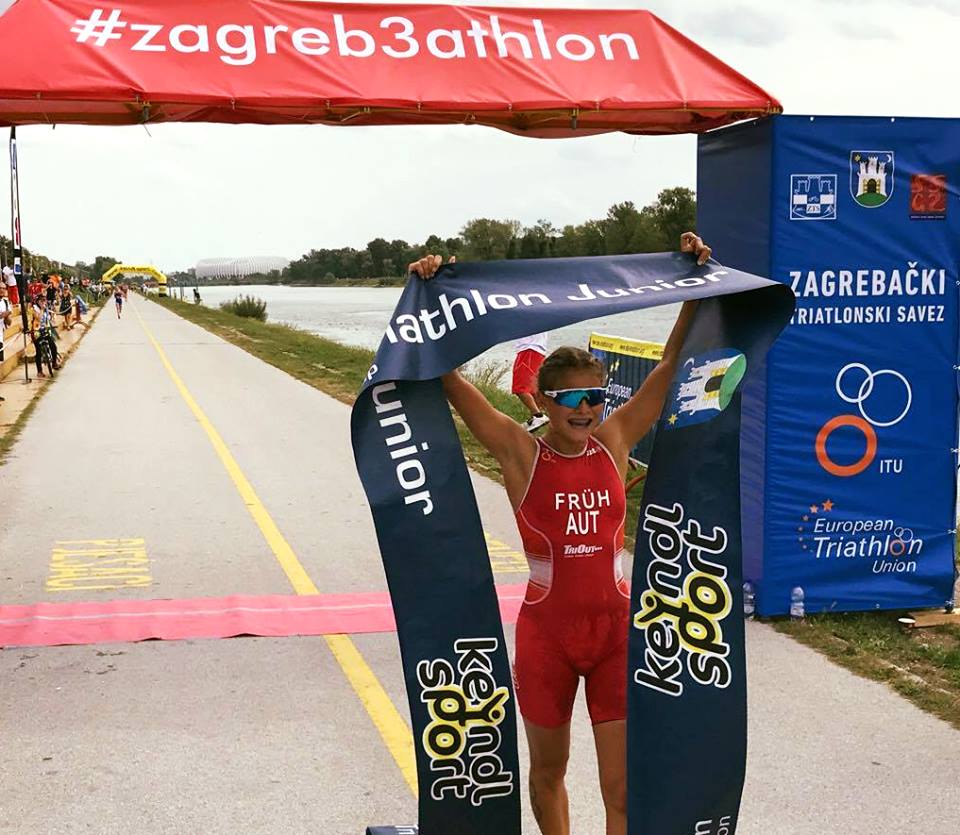 A swift T2 and Früh, the bronze medal winner last year, burst out and onto the flat run course, leaving the rest trailing behind her. On the out and back course it was easy to estimate just how much pressure she needed to keep up to hold her lead and with the fastest run of the day, she was able to claim the win with a comfortable winning margin.  Riasova held her silver medal position despite pressure from behind. The bronze was fought for by a determined block of Italian athletes and one sole Polish athlete and it was a great run from Julia Sanecka that gave Poland a well-deserved bronze and sealed her arrival in the medal ranks of ETU. 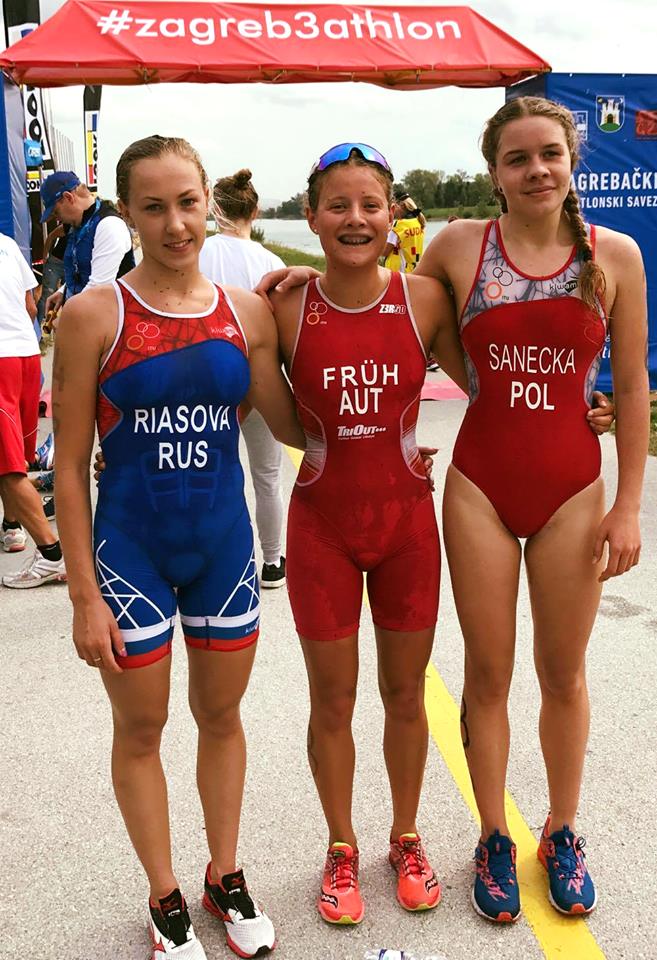 When the race was over, Früh said, simply, “Won my first Junior European Cup today. Short race summary: swim alright. Bike everything under control and an amazing run victory. Just a fantastic day, Zagreb I love you!”

Riasova’s silver here has shown her consistency in racing and with her, we see part of the new generation of younger Russian athletes. 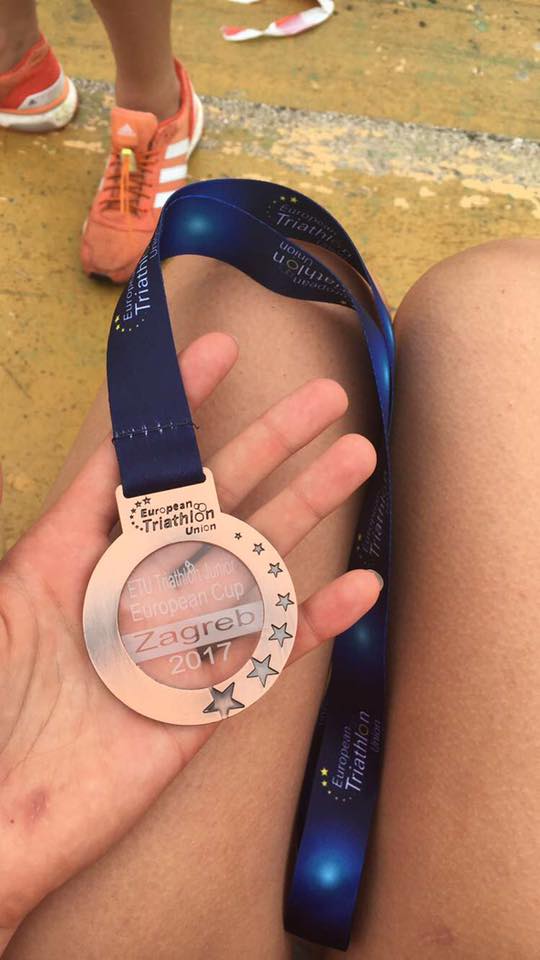 For Sanecka, “Dzisiejszy dzień był dla mnie wielkim zaskoczeniem… Lecąc na te zawody nie przeszło mi nawet przez myśl, ze mogę zdobić medal. Podczas przygotowań do startu nie wszystko szło po mojej myśli jednak w trakcie zawodów było znacznie lepiej. Cieszę się, że miałam szansę wystartować w Pucharze Europy Juniorów i reprezentować nasz kraj. Mam nadzieję, że to nie ostatni medal takiej rangi. Today was a great surprise to me… flying out to this competition I didn’t have any thought that I could win a medal. During the preparation for the start nothing like that went through my mind but during the competition it was much better. I’m glad I had a chance to start in the European Junior Cup and represent our country. Hope it’s not the last medal.” 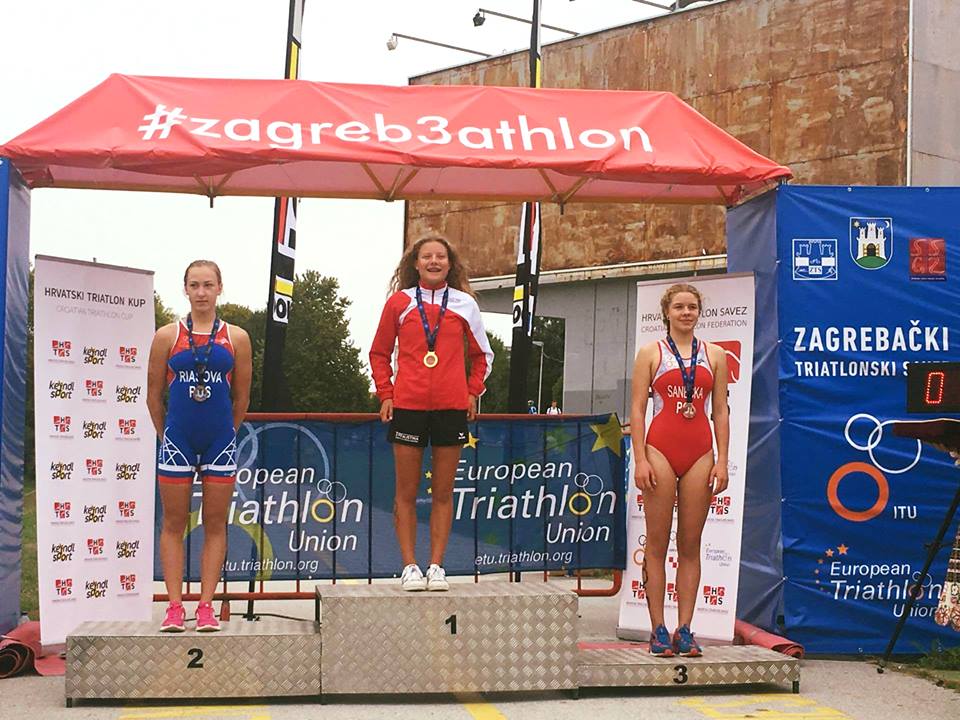 The victory here for Früh has certainly helped Austria in the ETU Nation Rankings and as we await the update, we can look forwards to the final race in Melilla, where the top three places will be decided. 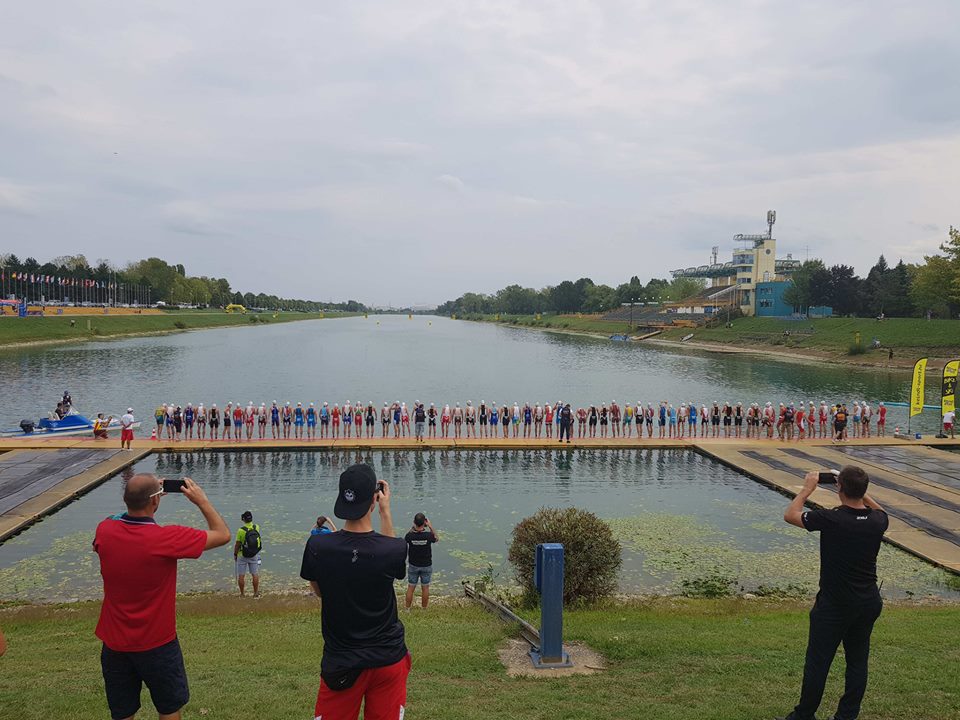 The Men’s race saw one of the biggest starts of the year and for the Technical Officials standing on the pontoon, it must have been a worrying few seconds as the 66 athletes pushed hard off the pontoon (worrying, certainly but thrilling beyond belief!).

With only one French athlete in the race and a whole army of Austrian and Hungarian athletes, the points battle would be an easier one to win for those nations behind the leading Fédération française de triathlon.

Hungary immediately set about disrupting any challenge by Austria’s Lukas Gstaltner and it was Gergely Kiss and Tamás Papp along with Estonia’s Kevin Vabaorg who led out of the water in superfast times.

A small breakaway ensured the race would be exciting but strong cycling led to the medals being decided on the run. 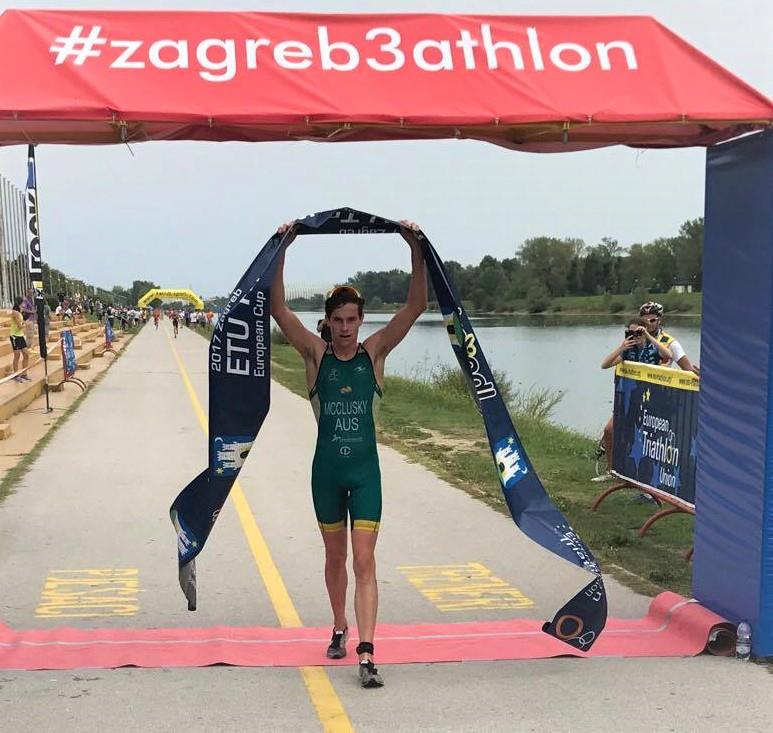 It was Aussie Callum McClusky who posted a blisteringly fast run split of 16:06 to dominate the final 5k and to take the gold. We have commented before on how delighted we are that athletes from other Confederations choose ETU events to race at and know that they go home with great memories. For McClusky a crash in Bled earlier on in the season must have been dreadful for his family to hear about. Winning gold, well, the celebrations are probably still going on down-under. 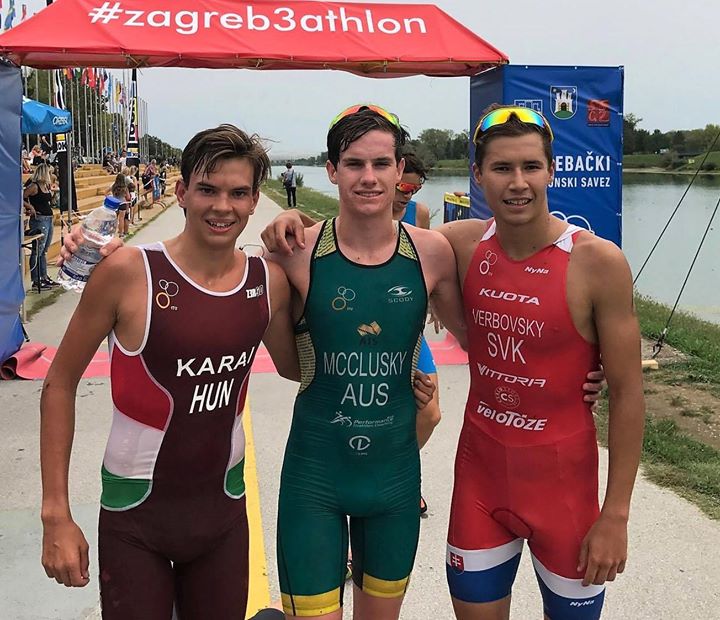 His pace took him ahead of Levente Karai who, born only in 2000, shows that Hungary has good athletes ready to step into the national team and gets his first taste of standing on the ETU podium. Slovakia’s Matúš Verbovský claimed bronze and his second ETU podium.

Zagreb was not just a race for the ETU Junior Athletes; it was a race open to all ages and the organisers included their National Paratriathlon Championships in the weekend of racing. 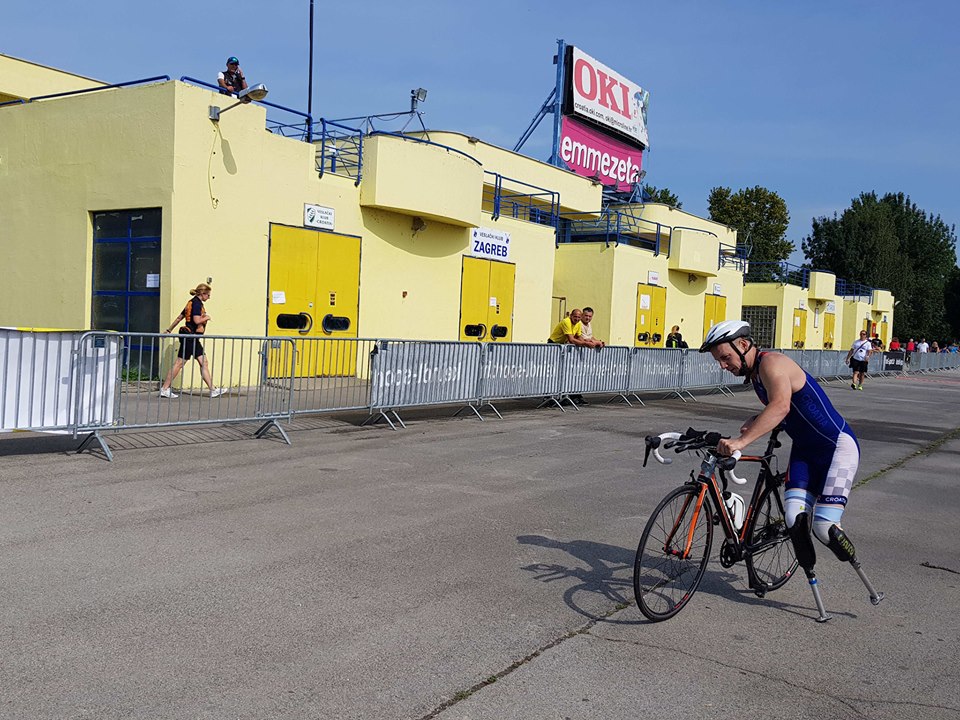 With the inclusion of open waves, youth waves, relay events and paratriathlon events, the Hrvatski triatlon savez - Croatian Triathlon Federation has embraced the sport and delivered to their public a great event. We were very fortunate that at this event Herwig Grabner (AUT) was present as representative of the ETU Executive Board. Along with the Technical Delegate, Dora Rozsa and the Race Referee, Alpar Nagy and with constant updates from Petra Kasović we were able to follow the event. 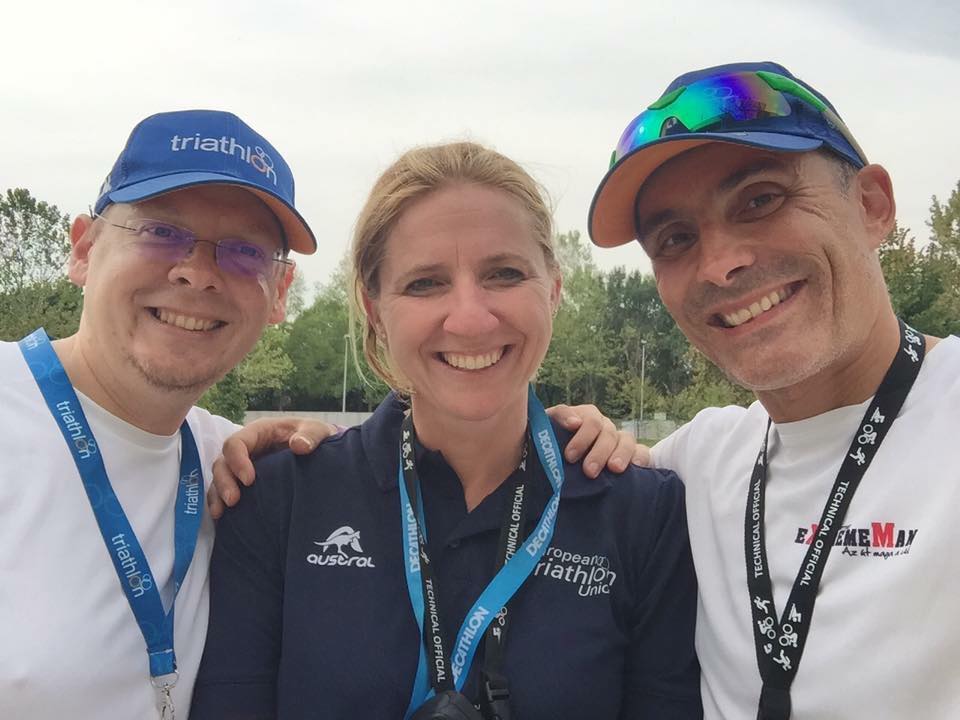 For the TD, Dora Rozsa, “I would like to say thank you for all Technical officials and the Croatian Triathlon Federation as a Local organization for their hard work on the weekend on the Zagreb Junior European Cup. Well done!”

So, Junior Points; it’s getting exciting now and all the focus moves to Melilla.