Amazing races in Caorle this past weekend!

120 junior males and 90 junior female triathletes competed on Friday the 13th of May to secure a place in the finals for the following day. At 15.00, the start of the first of the four men’s heats saw the victory of the Spanish Pelayo Gonzalez Turrez who covered the supersprint distance (300 meters swimming, 9.3 km cycling and 1.9 km race on foot) in 25’16 (for the Azzurri, third place for last year’s winner of the Europe Triathlon Cup in Caorle, Euan De Nigro and fourth for Miguel Espuna Larramona). In the second heat, Mexican Nicolas Probert Vargas took the top spot in 25’56. The Australian Bradley Course took the victory in the third heat in 25’57. To end the men’s qualifications (qualification for the first seven of each heat plus the best two times) the fourth battery saw the domination of Dutchman Niels Van Lanen in 26’03.

Among the women (qualification for the first nine of each heat plus the three best times), the winners were Tilda Mansson in 28’‘48, the Slovak Margareta Vrablova in 29’05 ‘’ and the Italian Myral Greco, who at a photo finish, in 28’48 got the better of the Spanish Jimenez - Orta.

Beyond the competitive aspects, there were many emotions for the young athletes who arrived in Italy, many of them at their first racing experience abroad. A unique opportunity to challenge peers and experience the beauty of triathlon. Among other things, Caorle hosted two Ukrainian athletes in the Junior category with their coach; thanks to the collaboration between the Lampo Agency, the Municipality of Caorle, the Caorle and Eastern Venice Tourism Promotion Consortium and Silca Ultralite Vittorio Veneto.

At 2.00pm the women jumped into the water, 30 under 20 who yesterday gained access to the round that is worth the medals by competing in the semi-final heats. The first to come out of the water, after swimming 300 meters, were the Italian Pia Fischer, closely followed by the Portuguese Carvalho, the Spanish Pena and the Slovakian Vrablova. In the 9.5km of cycling, divided into three laps, the group remained compact for the first part and also recorded the fall of three athletes. The return to the transition area for the second transition also saw the triathlete at a distance of one second from each other. The run leg of the race was decisive: in the last 1.9 kilometers the Swedish Mansson who, up to this point remained in the middle of the group, launched a very long sprint and meter after meter, overcame all the opponents and raised her arms to the sky at the finish. “I’m really happy with this victory - comments the 18-year-old Swedish, European and world triathlon vice-champion in 2021 - in the first part of the race I remained in the group, during the cycling there was also a fall of some athletes, but in the last stage I ran as hard as I could and I managed to win. Caorle is a beautiful city, I really enjoyed competing here”. 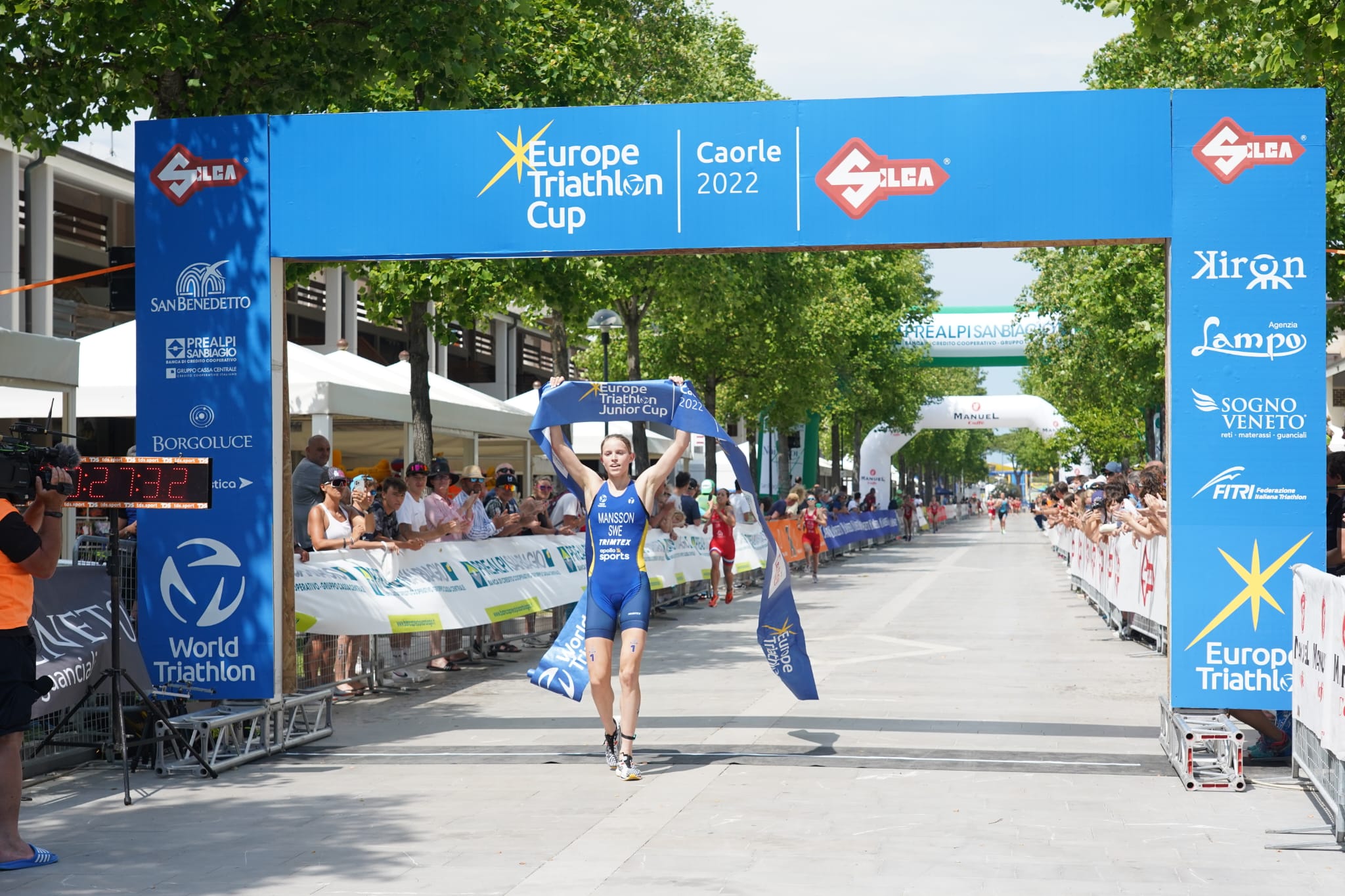 At 3:00pm was the turn of the Junior men. After the 300 meter swim, the Australian Crome was in the lead, followed, four seconds later, by the Italian, De Nigro. In the cycling stage some tried to split the group but didn’t succeed. Also in the transition area, for the second transition, the group was compact. De Nigro was there at the front, but behind the Australian Course who came out first for the last leg of the race. The 17-year-old “azzurro” from Bressanone believed, didn’t give up and, mindful of the 2021 success, launched an incredible sprint. On the final straight he came first and upon arrival, he not only crossed the finish line, he jumped the banner. He said: “After the victory in 2021 I also had a bit of pressure, I wanted to do well, also because I like everything about this race in Caorle, from swimming in the sea, to cycling to race - says De Nigro - I swam well, coming out of the water second, we tried to stretch on the bike, but the group regrouped. When we returned to T2 I accelerated, I wanted to change my shoes as soon as possible to start the race. I pushed and in the end I won. I thank Fitri and the federal doctor who helped me recover from a knee problem I had this winter”. 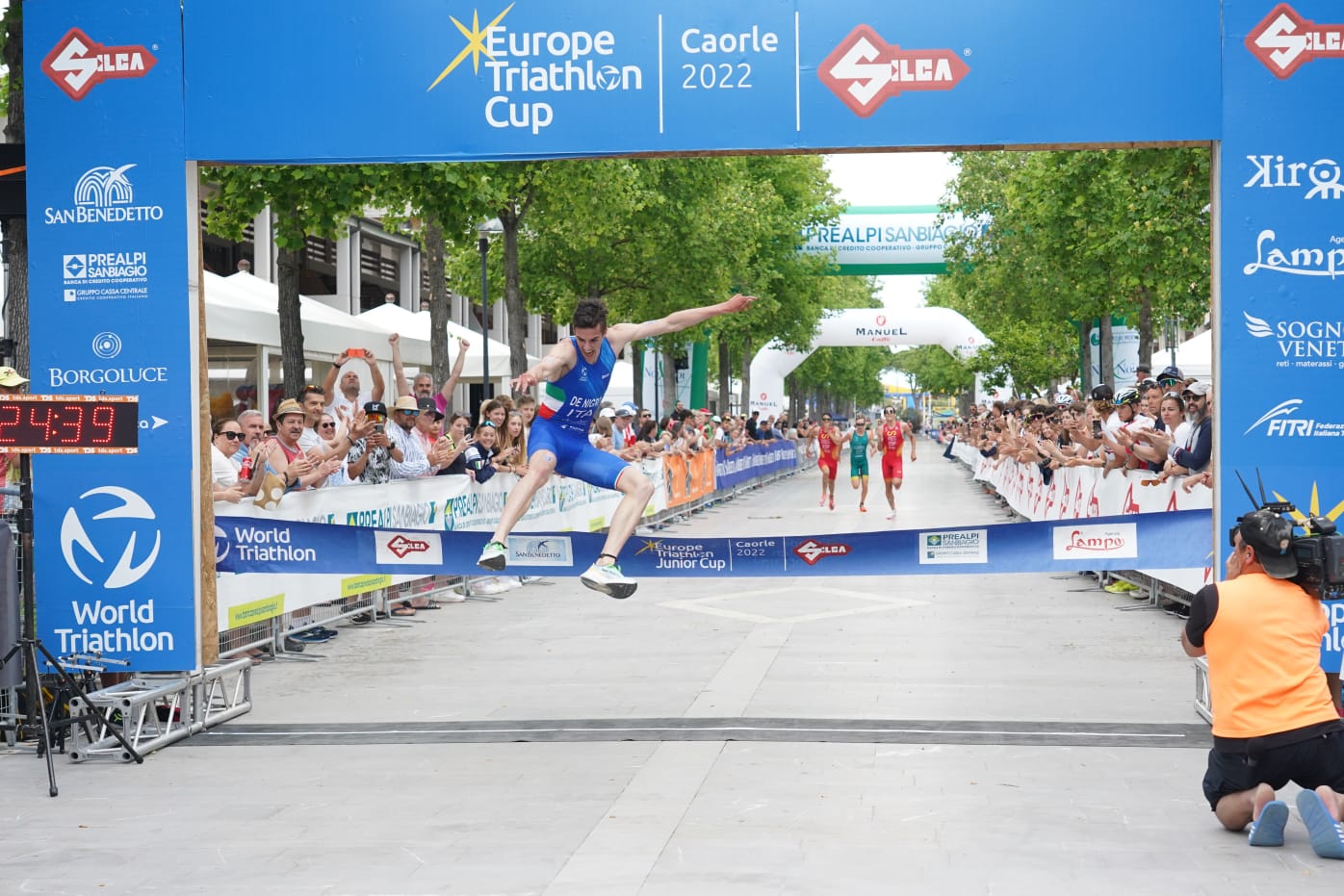 The Elite Europe Triathlon Cup of Caorle was won by the Italian girl Carlotta Missaglia and the Swiss Max Studer. They are the winners of the Elite race staged on Saturday the 14th of May. On the podium of the “greats” also another “azzurra”, Angelica Prestia and the German Selina Klamt and compatriot Lasse Luhrs and the Israeli Shachar Sagiv.

After swimming 750 meters, the first to come out of the water was the Bianca Seregni. Behind her was the British Sophie Alden. Once on their bicycles, the two tried to breakaway. Soon Seregni was left alone and seeked a solo break. On the fourth of the six laps planned for the 19.2 kilometers of the cycling section, the group regrouped. In the transition area, for the second transition, Carlotta Missaglia was leading the group. Then a squad formed of four athletes, Missaglia, Prestia, the Swiss Schar and the Austrian Perterer. On the final straight Missaglia goes on to win, ahead of her training partner Prestia and the German Selina Klamt. She said: “What an incredible race, so many emotions and then, on the final straight, the cheering of hundreds of people all cheering us, screaming, it was wonderful. Racing with Angelica Prestia in the last leg of the race helped me, especially on a motivational level. She believed in it a lot and gave me a hand. In swimming I started well, then I got a bit lost but I recovered in transition and in the first part of cycling. During the cycling stage, however, we weren’t able to “work” well. Everything was played in the leg of running on foot. In the end I did it and I’m really happy”.

At 18.30 was the turn of the 70 athletes of the men’s Elite race. Like last year, the fastest to swim the 750 meters was Alessio Crociani who once on his bike tried to stretch the group, and was then caught by the group after two of the six laps scheduled. The French Passemard and the English Dickinson were the first to leave the transition area for the last leg of the race on foot. Already at the end of the first of the two laps of the last leg, however, Studer managed to make up for the 7 seconds delay he had and started leading a small group launched towards the finish line. The Swiss won, ahead of the German Luhrs and the Israeli Sagiv. “It was my first time here in Caorle, I arrived by car from Saint Moritz where I was doing a training internship, I liked everything, the views I saw to get here and this charming town by the sea, I hope to return to the next year - says the Swiss, in the top ten at the Tokyo Olympics last year - for how long it’s about the race, I stayed in the group in both swimming and cycling, but I still had energy for the run, so I pushed and I’m happy that no one was able to keep up with my pace ”. 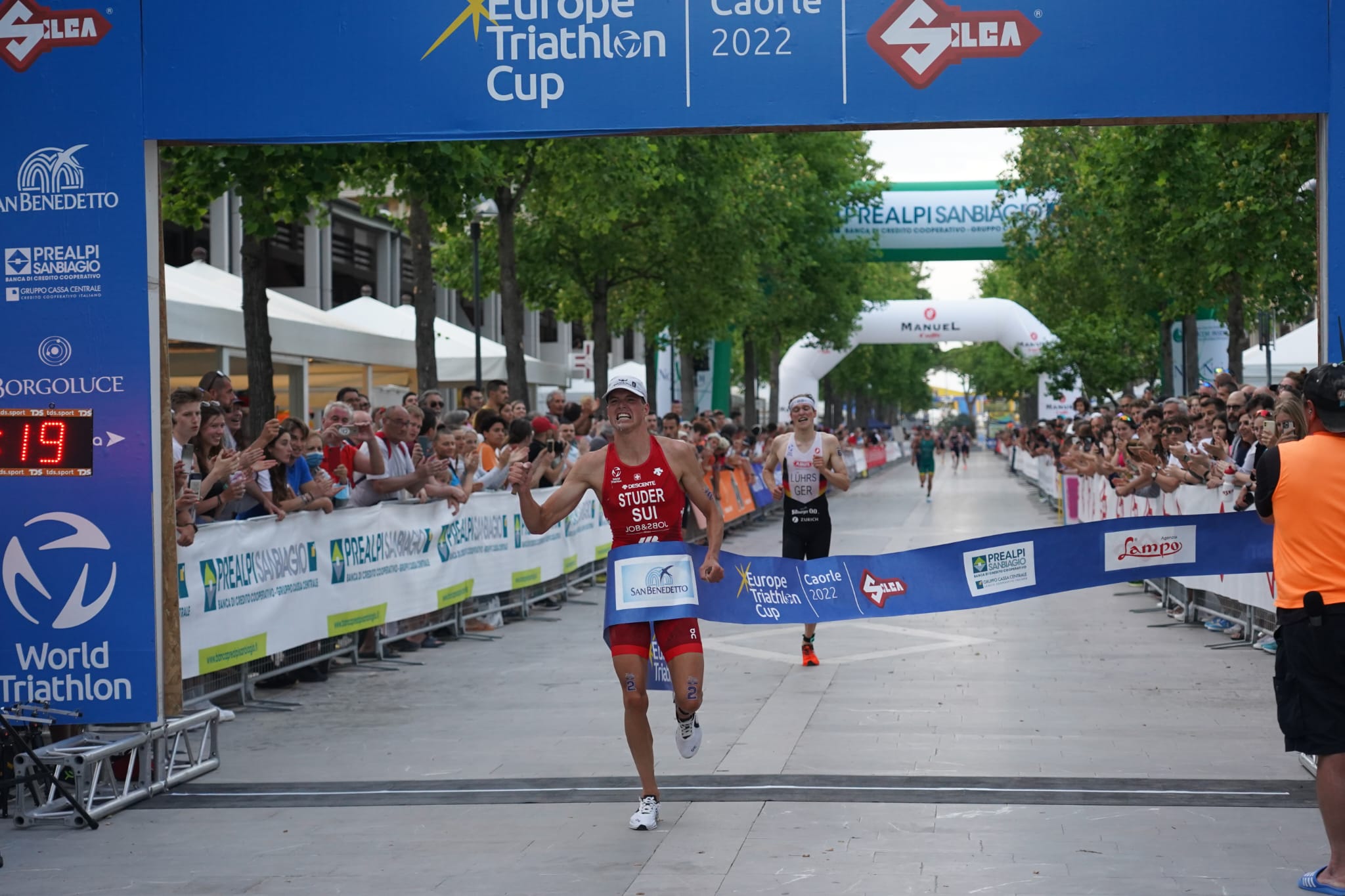 See you the next weekend for the European Championships in Olsztyn, Poland! We can’t wait.