Well, 2017 was a great season that provided us with variety, new locations, great races and a thrilling ETU Cup Final.

The ETU Executive Board held its Events Meeting late last week to finalise the appointments of the various races that will make up our 2018 calendar.

There are a couple of events (TBC) that have not yet been fully fixed in stone but for the rest, the dates are good.

Our Championship events are first up on the list with the first medals up for grabs in mid-February. 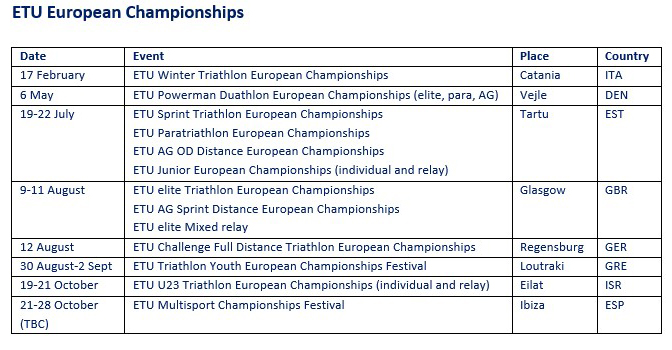 The Italian Federation will host the ETU Catania Winter Triathlon Championships, for all categories, in the shadow of Mount Etna, where the snow is good and where you might even consider extending your stay there to explore. Fans of Inspector Montalbano, this is your island too.

After the Winter Triathlon, the next set of Championship medals to be awarded will be for the Elite, Para and Age Group Long Distance Duathletes at Vejle, in Denmark. This event would be a good test for anyone considering the longer distance Powerman event at the end of the year in Zofingen, where in 2018, the event celebrates it 30 years birthday.

Our first big Age Group focus of the year will be in Tartu, Estonia, where they will race Standard Distance for the chance of the European titles. Alongside the Age Group races will be the Elite Sprint, the Paratriathlon and Junior Championships, including individual and relay.

The Elite will have a chance to show off their skills on the technically-challenging course in Glasgow that featured in the 2014 Commonwealth Games. They will race there for the Standard Distance titles and also for the Mixed Relays. Age Group athletes will be able to race there too, over the Sprint Distance.

For those who like to go long, you can head to Regensburg in Germany for the ETU Challenge Long Distance Triathlon Championships in August.

We are delighted that once more we can host the hugely popular developmental ETU Triathlon Youth European Championships in 2018. This year, the event moves to Loutraki in Greece. A fascinating location and a warm welcome from our Greek hosts awaits our very important youth athletes.

Eilat features once again in the calendar with the ETU U23 Championships taking place there in October. A bit of late-season sunshine in this very special beach resort, where the seas are crystal clear, is just what we need.

The event that has attracted huge interest is the one right at the end of the season and for all you party-goers out there who can still remember how to rave, Ibiza awaits you. The ETU Multisport Championships Festival takes place at the end of October, where the Cross Triathlon and Duathlon titles will be decided, along with the Standard and Sprint Duathlon titles (Standard Distance for Elite, U23 and AG and Sprint Distance for Juniors, Para and AG), Aquathlon and Middle Distance titles. There will also be a chance to play with the new format of Aquabike. No titles, just a demonstration event. A whole week of events and the best excuse ever to go to Ibiza in October (if you need to convince your boss).

We have of course a very important event for our Youth Athletes in their qualifier for the Youth Olympic Games that are due to be held in Buenos Aires in October 2018. The chance for selection will be in Banyoles, Spain in July.

We also have the Regional Championships; where titles will be decided for the Baltic and Balkan athletes. In previous years we have also seen the Mediterranean and Nordic Championships. Once these events are added to the schedule, we will update you. Please note, these events are open races and anyone, from anywhere in Europe and indeed anywhere in the world can race here. Please, if you are from outside Europe, check with your National Federation for clarification about points that might be won at these ETU Regional Championships.

The backbone of our annual racing calendar is the series of European Cup events that reach all corners of Europe. 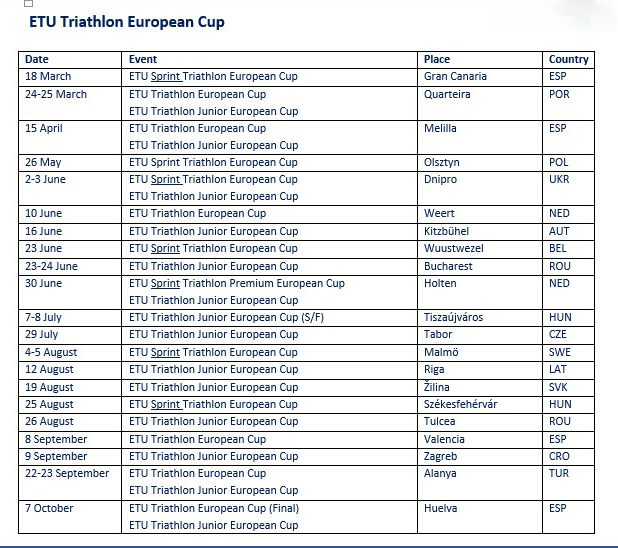 We welcome some new names; Olsztyn in Poland is up in the North-East of the country and we can expect a good contingent of athletes from Belarus, Russia and Ukraine to boost numbers and, over the Sprint Distance, provide exciting racing.

Bucharest will feature this year as the Romanian Federation goes from strength to strength with its race calendar.

Slovakia will host a Junior European Cup in Žilina, in the North-West and close to the Czech and Polish borders. Centrally-located, easy to drive to, this could be a very popular event for our junior athletes.

Not far from Budapest lies Székesfehérvár and this will be the venue for a Sprint European Cup. Again, easy to get to and like our other new arrivals, giving value for money in terms of transport, accommodation and food, this promises to be a popular event.

We welcome back the race from Ukraine. In May 2016, the name Dnipro was formally adopted for the city of Dnipropetrovsk (UKR) or Dnepropetrovsk (RUS). Here, the massive river Dnipro is 2k wide and offers a safe swim, in clean waters followed by a testing bike ride and a river-side run. Ever been to a former “closed city”? No? Well, this is your chance. Flights take you easily to the city airport and the accommodation is a short walk from the race venue.

Coming back to the race calendar too is the Alanya race, planned to be a European Cup and Junior European Cup.

The remainder of the calendar offers our athletes a variety of events where they can race for points and prize-money and where they can test themselves, racing against each other and against the clock to get the very best from their training. With the season starting once more in Gran Canaria, this time in early March, ETU can offer a full programme of events that will attract the best European athletes and, as we have seen in the past, athletes from all over the world who simply love racing in Europe.

The finale in 2018 will be hosted once more by the Spanish Federation and will head to Huelva. This year, Huelva was an ITU World Cup and for many, it was the most impressive race they had been to, with thousands of spectators coming out to cheer and celebrate with the athletes.

Get your diaries ready – start booking your annual leave.