With focus this last weekend upon the Long-Distance athletes, the Paras and the U23s, there was still a lot going on in Zagreb where the Junior European Cup had the added thrill of the Mixed Relay. 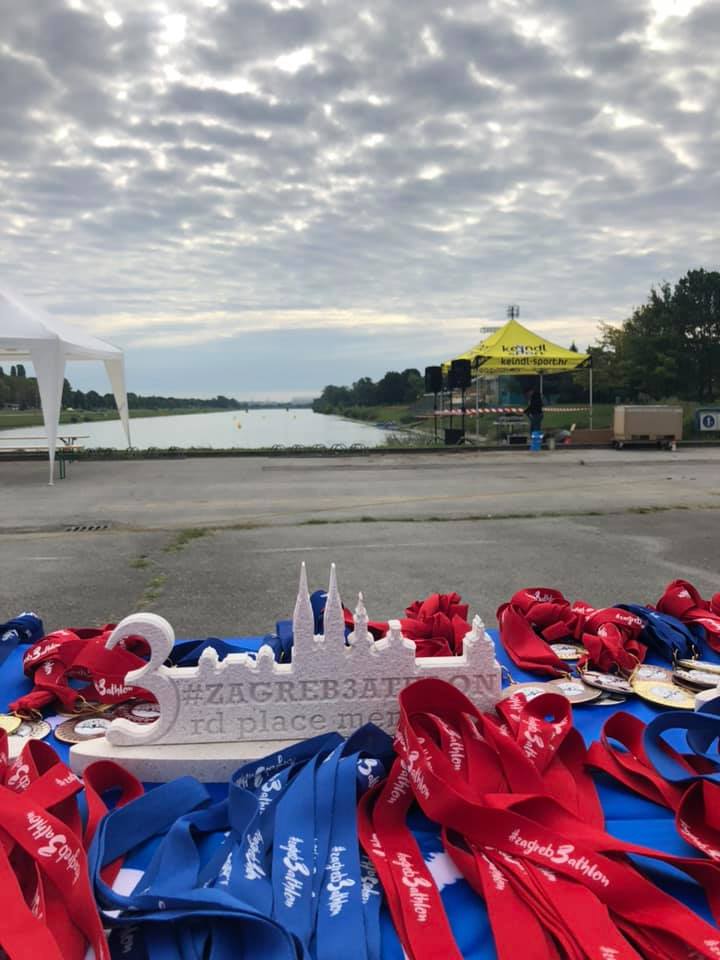 The event first came onto the ETU timeline in 2015, when the ETU Balkan Championships were held there. Many of the athletes who raced then are now household names. For 2016, 2017 and 2018, the event has been firmly set on the Junior Racing Calendar and, with its great location, reliable course and a strong team of local volunteers to make it all work, it has become a favourite for not only the athletes but also for the teams of volunteer technical officials. 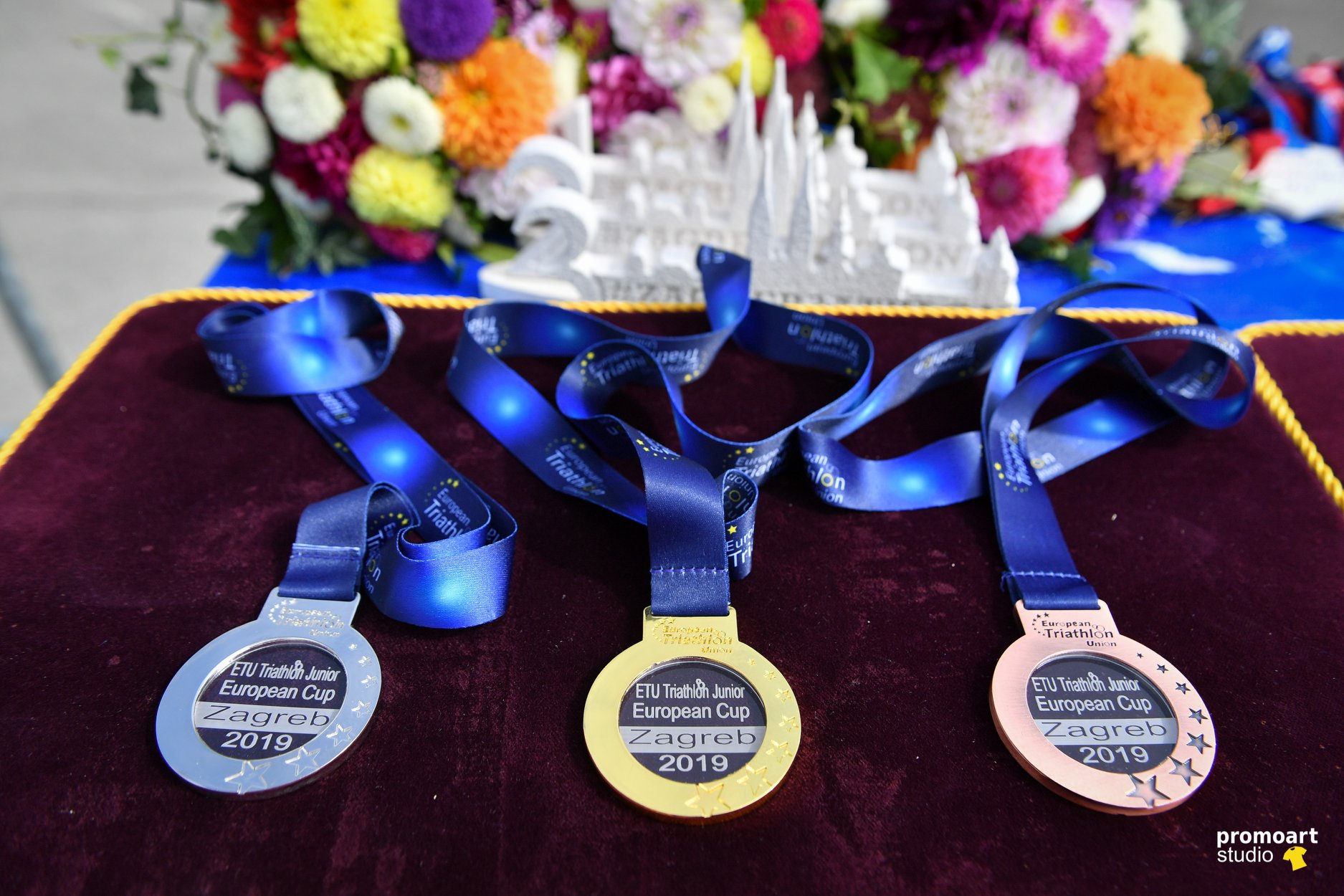 2019 was going to have something special too; a Mixed Relay to be held the day after the individual races. With the Tokyo focus on the relay format, ETU has stepped up tot he challenge and aims to hold more relay events in conjunction with Junior European Cups. Watch out for the Mixed Team Relay Championships, due to be held just outside Lisbon over the weekend, 5th & 6th October.

The points race was hotting up. Before Bled, it looked like this. 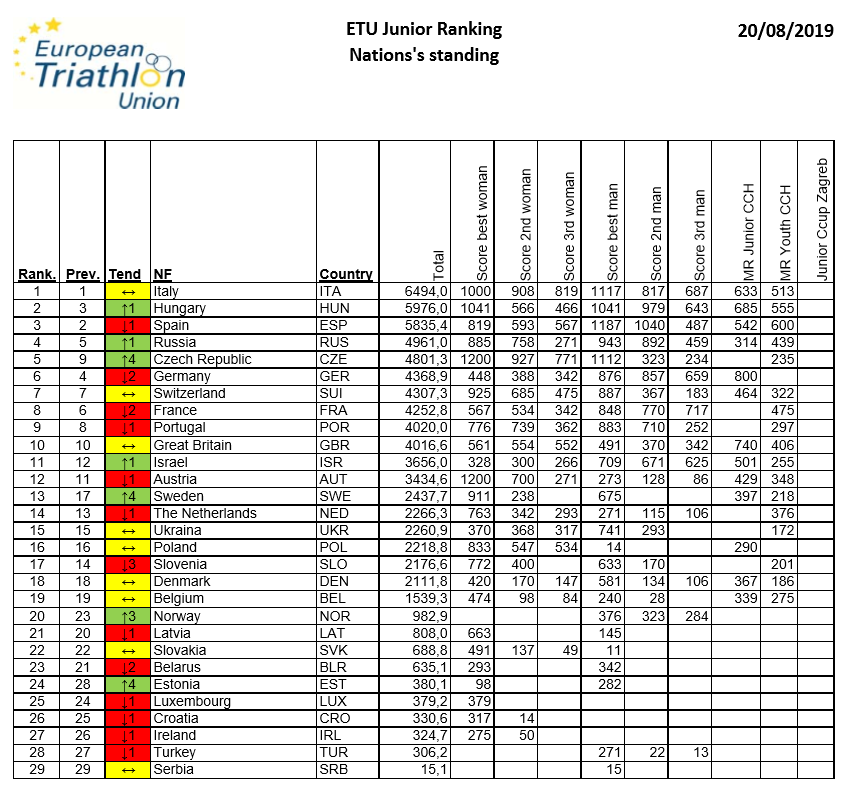 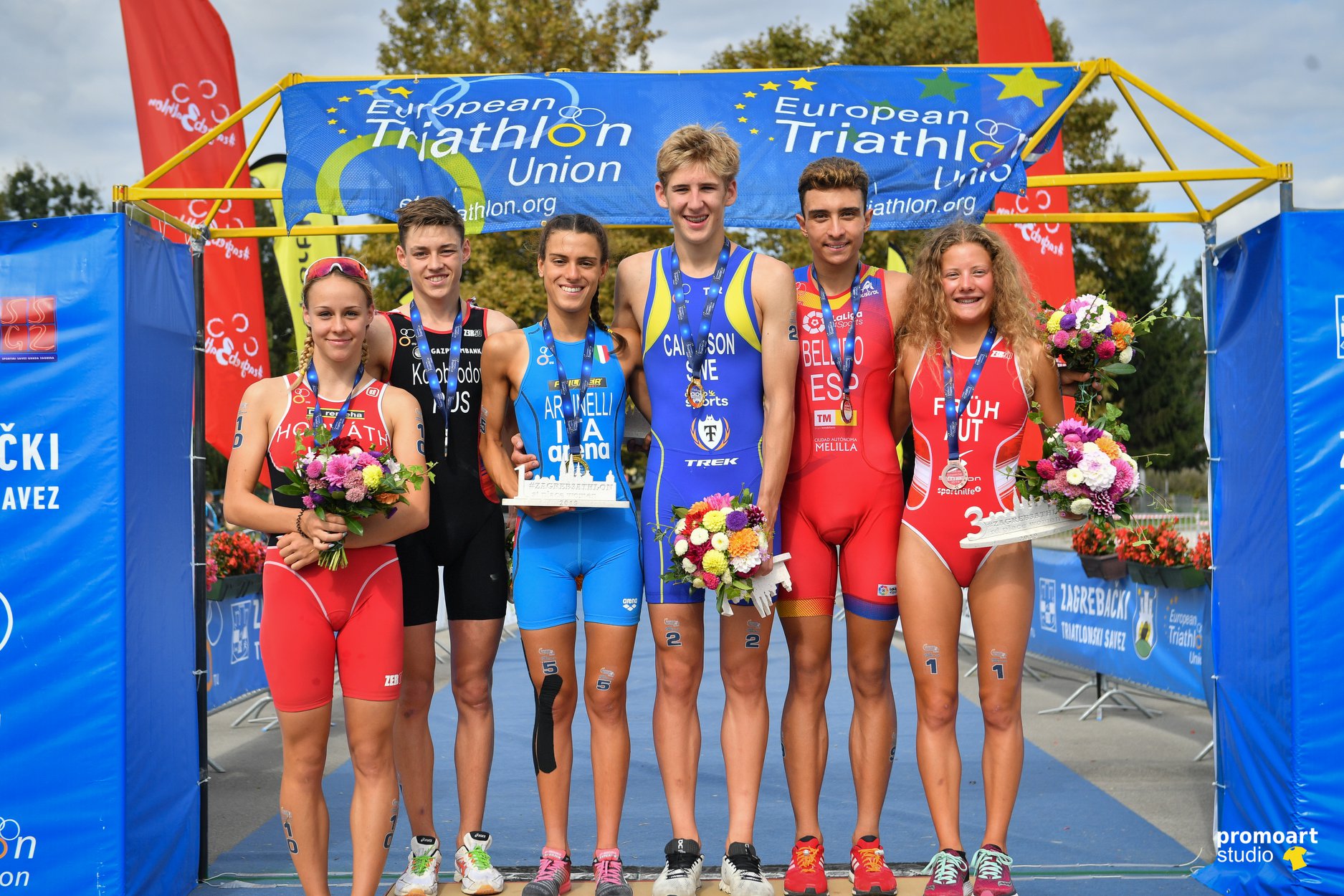 61 Junior Women lined up for the heartbeats. 17 nations, with visitors from South Africa. Austria once again sent a huge team but victory was to go to Italy’s Costanza Arpinelli, runner-up in the Worlds and 2018 World Junior Duathlon Champion.

Not the strongest of swimmers, she had  40 second deficit to make up behind her teammate, Bianca Seregni led them out of the water just as she did in 2018 and 2017. Tucked in tight was Hungary’s Karolina Helga Horváth.

Arpinelli knew that her main rivals were Magdalena Früh AUT and Horváth, who both came to the race strong and on form.

The Italian rode sensibly, knowing that her pace over the final 5k would assure her a podium at least and gold at best.

No errors in T2 and as she set off, there was nothing anyone could do to catch her. A 17:33 outshone  everyone and the only other athlete who went under 18 minutes was Horváth who did her best to keep the light blue uniform of Arpinelli in sight. This course can be a real test of your focus and that light blue uniform seemed to get smaller and smaller after each dead turn only to grow again as the two athletes neared. 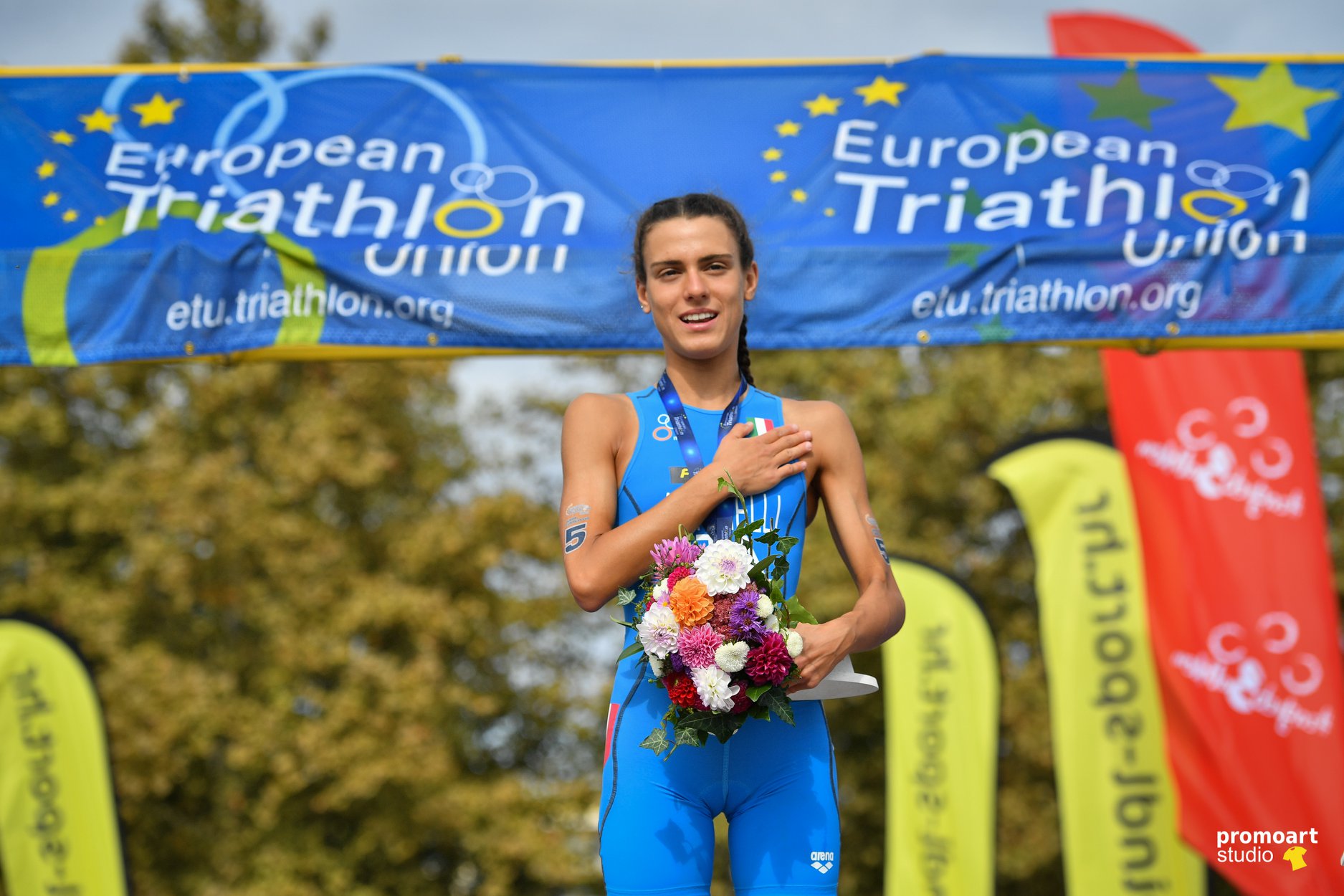 Arpinelli came home with a huge winning margin. Horváth was comfortably in silver and Austria, with Früh and Pia Totschnig in 3rd and 5th will have collected more points. 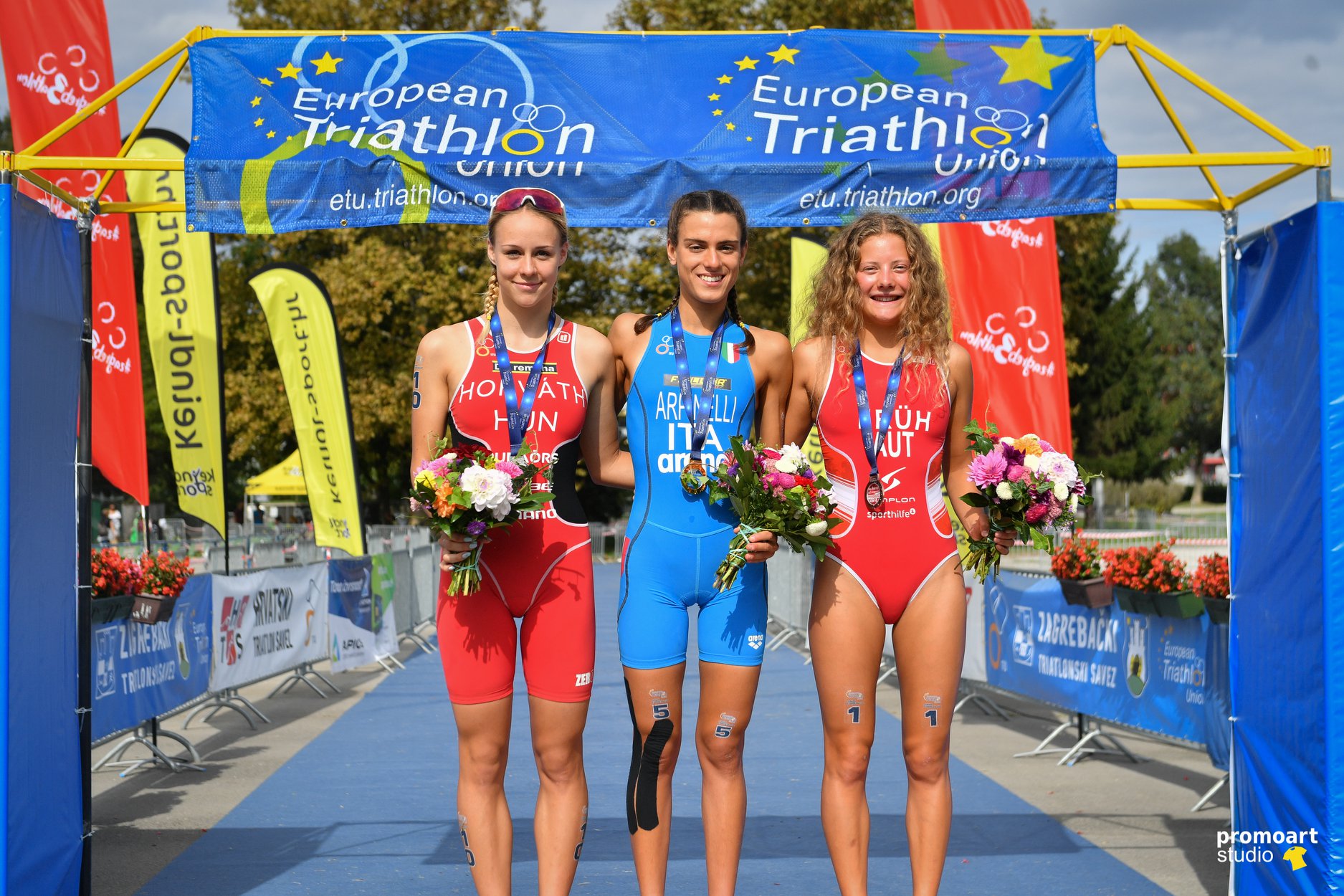 The Men’s race was 68-strong, with 18 nations represented, including South Africa. Italy had won this race in spectacular fashion last year but it was not to be a double for Riccardo Brighi this year. Instead, victory went to Sweden’s Andreas Carlsson, who upgrades his silver from Riga just a month ago, snatching the win from Russia’s Denis Kolobrodov. It was Kolobrodov who led the swim and then shot away on the bike to ensure that the pace was strong. No doubt a few words were exchanged between him and Spain’s Igor Bellido Mikhailova, who joined in the pace-work.

Carlsson had work to do after the swim but was strong on the bike and quick in transition. It was all going to be decided on the run and with Carlsson and Kolobrodov storming away, it was a question of who would collect the remaining medal.

Carlsson just had the edge over Kolobrodov, who had done so much work in the race and who is turning out to be a real asset for the Russian team. Third place went to Bellido, who seems to be improving with each race he enters. 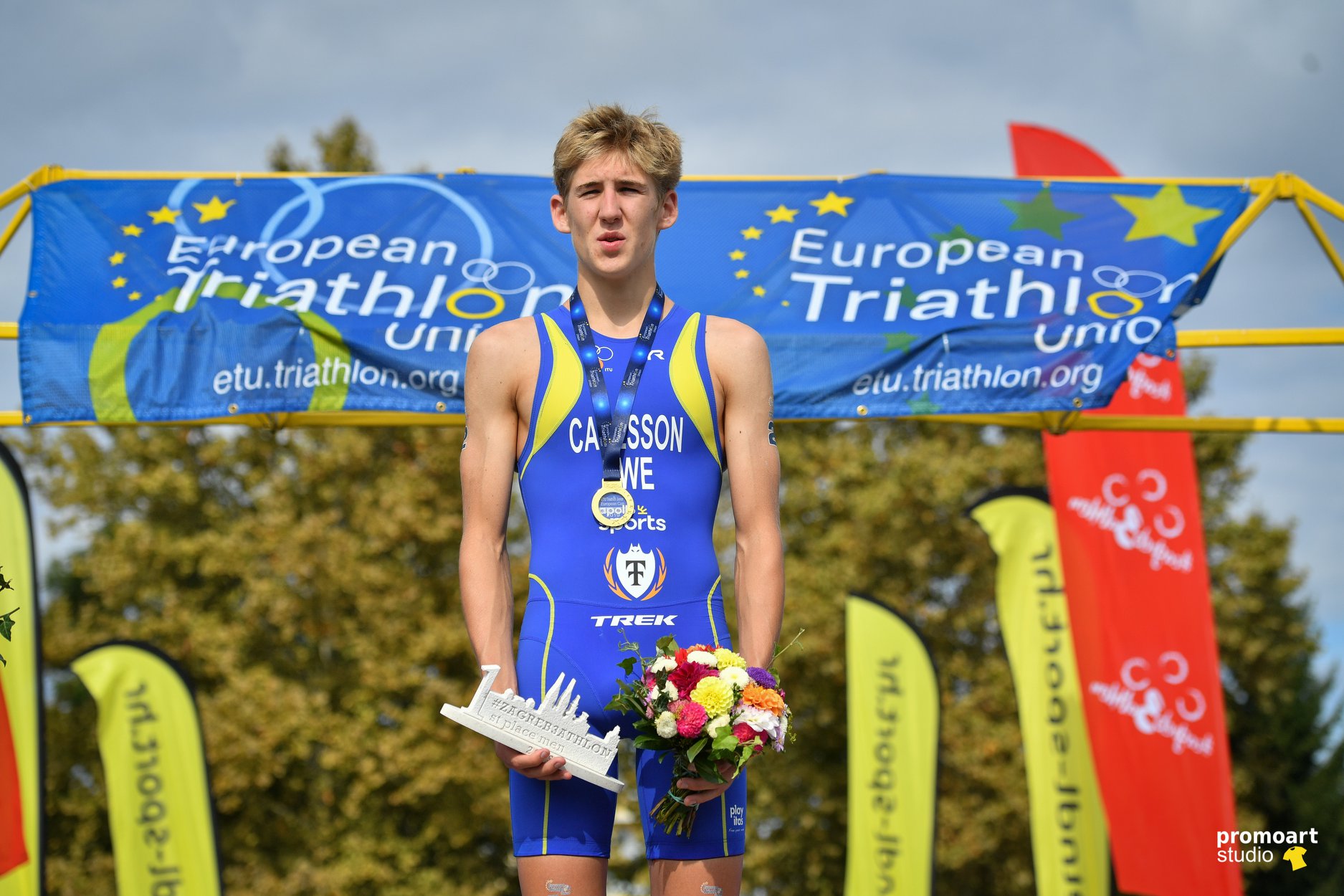 The long-awaited win for Carlsson is good news for the Swedish Federation, who celebrated with Gabriel Sandör’s silver in Valencia and will be looking at Malmö for the 2020 ETU Sprint Triathlon Championships with a smile on their face now. 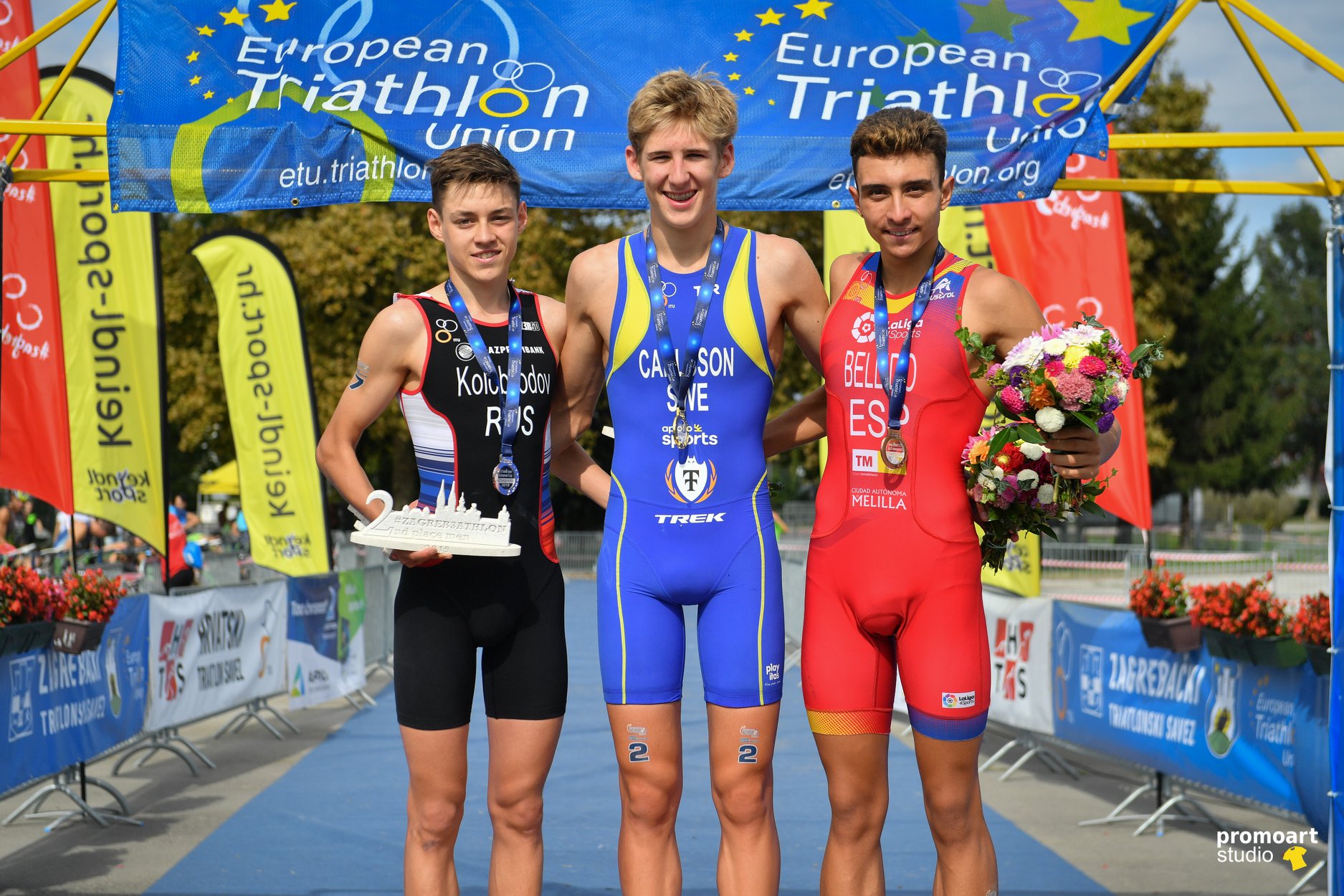 With the individual medals decided, it was time for the team managers and coaches to sort out who would race and in which order in the relays. 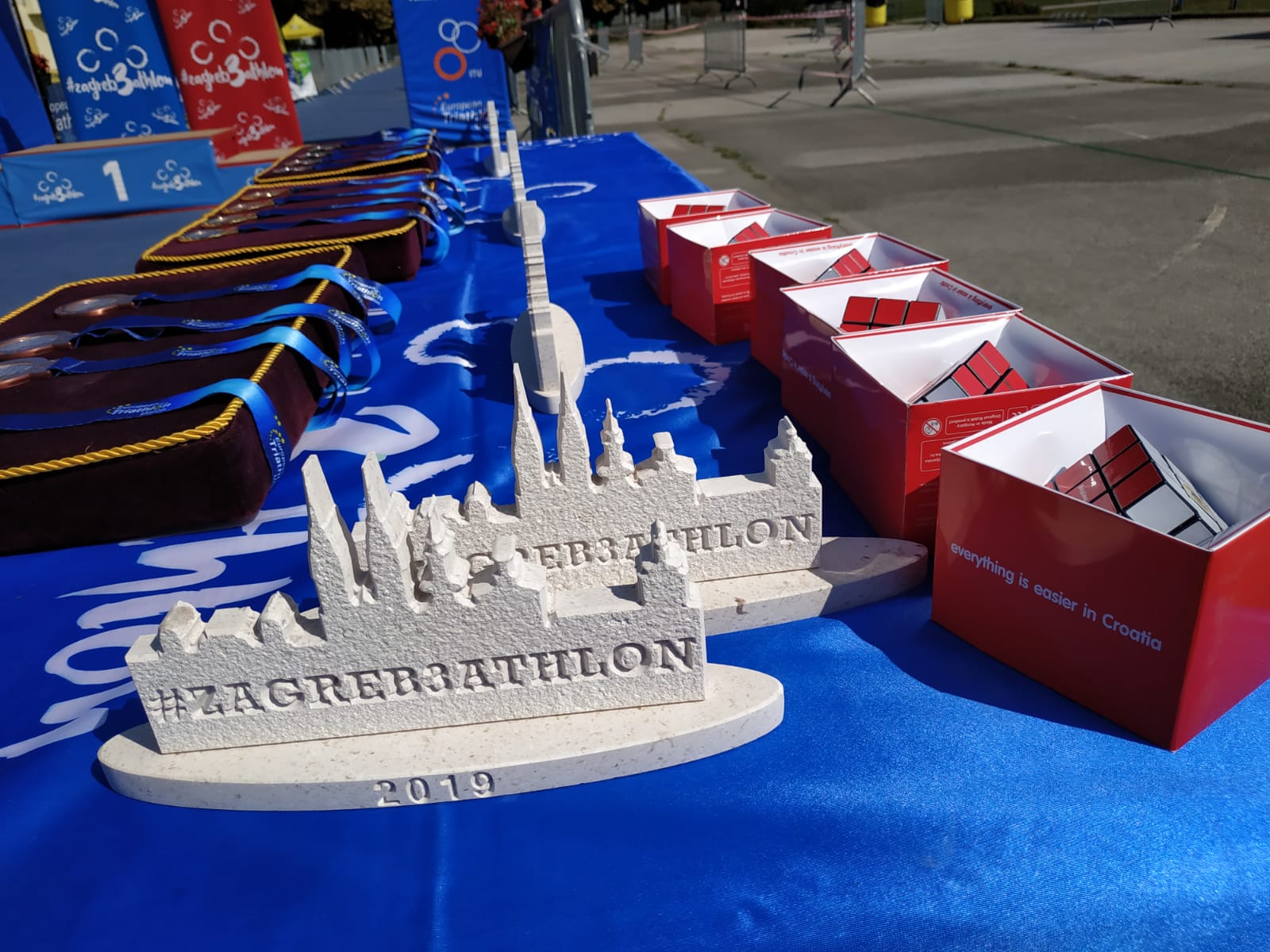 14 teams were on the start line, with Austria, Czech Republic, Hungary, Switzerland and the host nation fielding two teams.

Just 4 seconds separated the first three teams, as Costanza Arpinelli, showing no signs of fatigue after her victory, led the charge. Austria’s Magdalena Früh was the main threat, with a fantastic 5:27 run that threatened the Italian team all the way to the handover.

The initial power of the Italian team was matched in the second leg, to keep the lead by a narrow margin of just 5 seconds, with the Czech team holding off the Spanish. Austria had dropped back to the attack from Team Switzerland I.

A magnificent performance from Cathia Schär put the Swiss team into the lead. We had seen her race in Weert, where she just lost out in the final battle of the run to Früh but here, she attacked and took her team in to a commanding position. 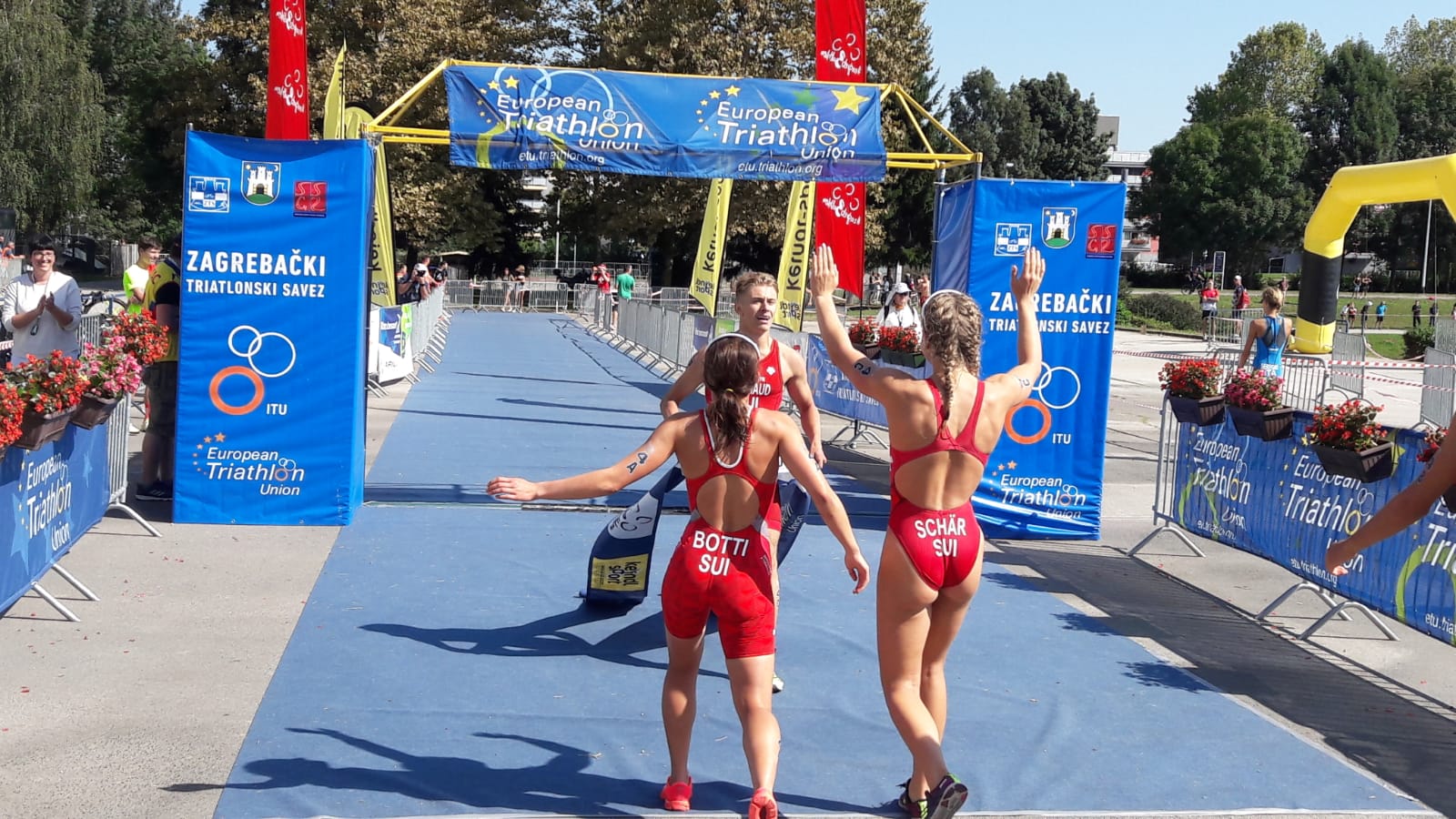 The final leg put Ludovic Séchaud into a position where he could ease up as he ran to the awaiting Swiss Team for the victory, with Spain edging past Italy to claim the silver. 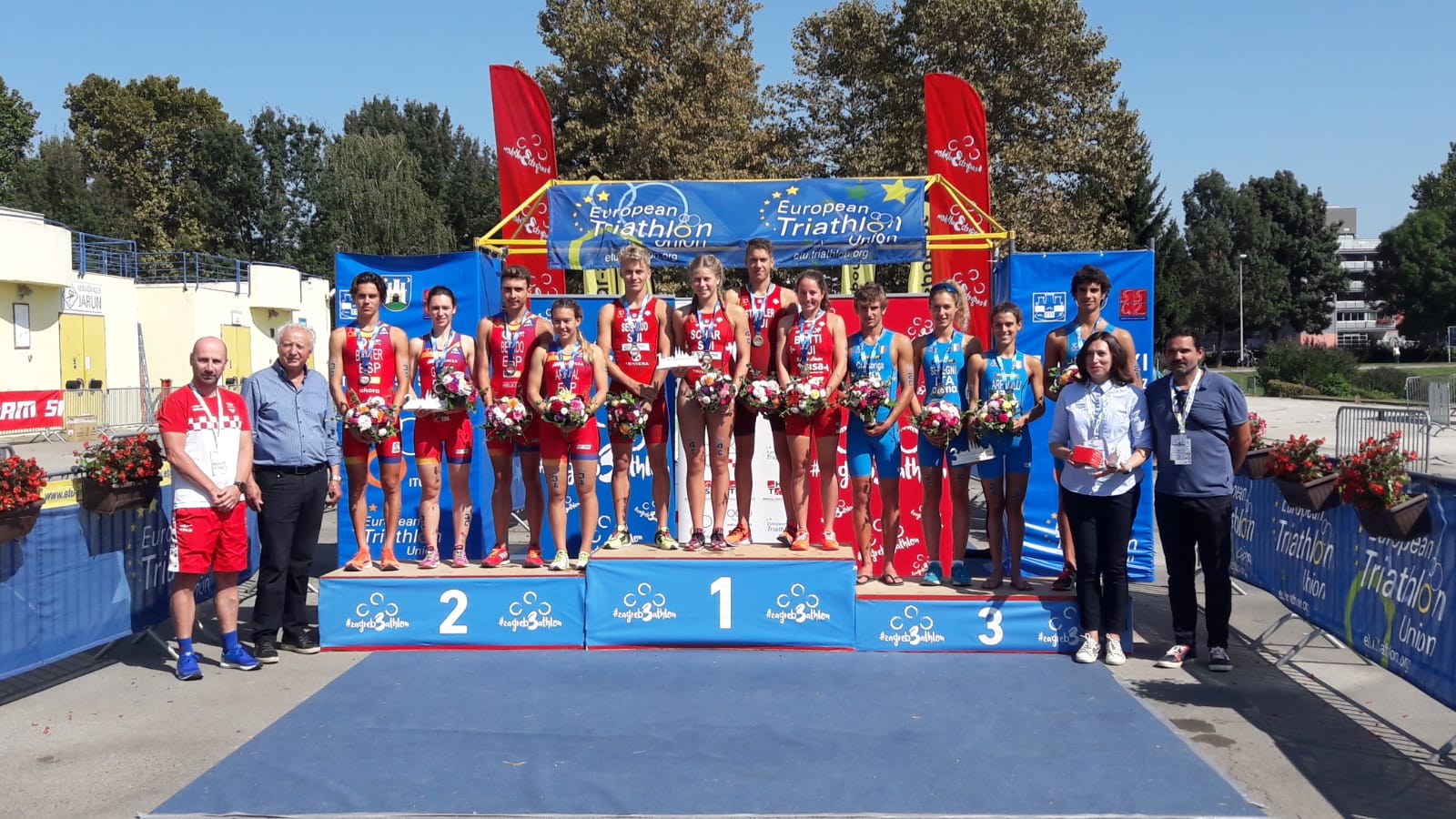 We are waiting for the official photos from the LOC and as soon as we have them a link will be provided here and on the ETU Facebook Page.

Zagreb once again delivered a great event, with athletes, coaches and spectators full of praise. 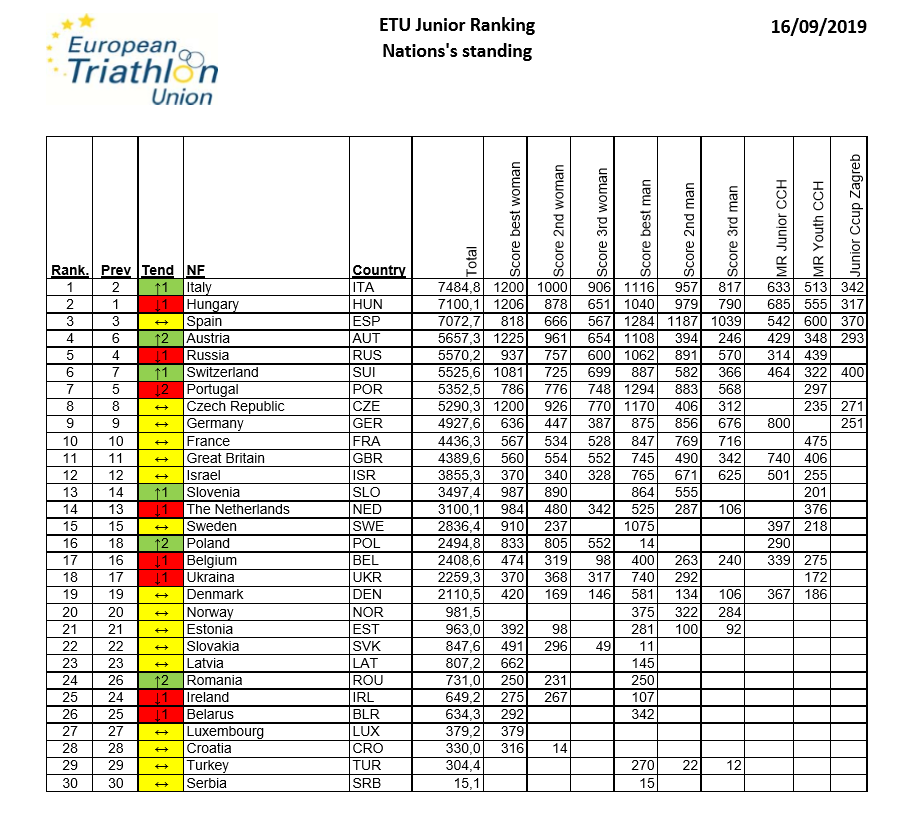 The updated Junior Rankings now show Italy leading, with Hungary and Spain following close behind. These three will have to maintain this high level of performance if they are to avoid the threat from Austria, Russia and Switzerland, who are still within reach.

The top three-placed nations will receive a bonus payout from ETU to use in the further development of their athletes at the Annual Gala Awards Night.