Juniors dodge the storms in Tiszy to deliver great races

This weekend was, for our junior athletes, an intense one of racing. For those who went to Tiszaújváros the competition was based upon the semi-final and final format, which meant the pressure was upon them on the first day to qualify and then on Sunday, to do their very best to get to the top ten.

With many more men racing than women, it would mean three semi-finals for them but for the women, it was only two.

Austria’s Pia Totschnig had a great race, keeping her cool as she exited the water some considerable way back to then use her bike and run power to storm to the front ahead of Dora Putnóczki and Fanni Soós. The local crowds were delighted that two of their favourite athletes had made it through to the final and the small but vocal supporters of Slovakia’s Kristína Jesenská cheered as she crossed the line in 4th.

Putnóczki was clearly the strongest swimmer once more and Totschnig, fast on the run, was a couple of seconds adrift from Adrien Hangya whose improved performance took her this year through to the final.

In the second semi-final, it was little surprise that Italy’s star athlete, Beatrice Mallozzi was the winner. Well-placed in the swim, she was in command throughout the race and eased up on the run to glide home in a faster time than Totschnig. Amber Schlebusch RSA came home in second, comfortably ahead of Australia’s Milan Agnew whose stronger run had taken her past Poland’s Magdalena Sudak.

For the men, the winner of the first semi was Germany’s Marcel Kunzelmann. He outpaced Austria’s Tjebbe Kaindl to take the win, with Hungary’s Levente Karai and Aurél Sinkó-Uribe a relatively new athlete to the Hungarian team easing into 3rd and 4th place.

Israel’s Itamar Eshed led the second semi-final, holding off the fast-finish of Márton Soma Kovács HUN, who posted a 10:16 for the final run, making a clear statement to all that he has the necessary pace to make a mark. Ábel Sinkó-Uribe, a Highgate Harrier, came home for the third place and it was Hong Kong’s Jason Tai Long NG in 4th to secure places in the final.

The last chance for qualification saw South Africa’s Jamie Riddle and Max Stapley ITU thrill the crowds with a cat and mouse race that gave them the same finish time but which saw Riddle just edge ahead of the soon to be Aussie. Just check out their times in the semi-final and see how close it was. Behind them, having lost time on the swim and bike but putting in a massive run was Yoav Avigdor ISR, who claimed 3rd and Zsombor Dévay who placed 4th.

With the preliminary races completed, the finals would be filled with the best athletes and the crowds would be guaranteed a great day of racing. As the day unfolded, it was in fact the Juniors who gave the full performance, as a massive storm wreaked chaos in the Elite men’s race, with wind blowing athletes off the course, wrecking barriers and then hailstones, rain and lightning making it simply too dangerous to continue. 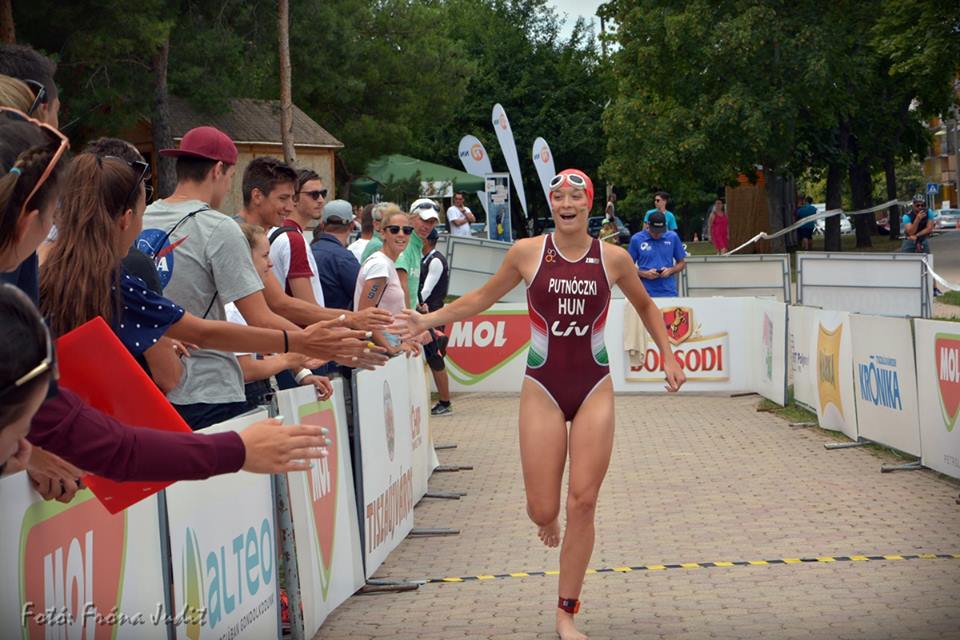 The crowds cheered as the Hungarian athletes made their way to the pontoon. 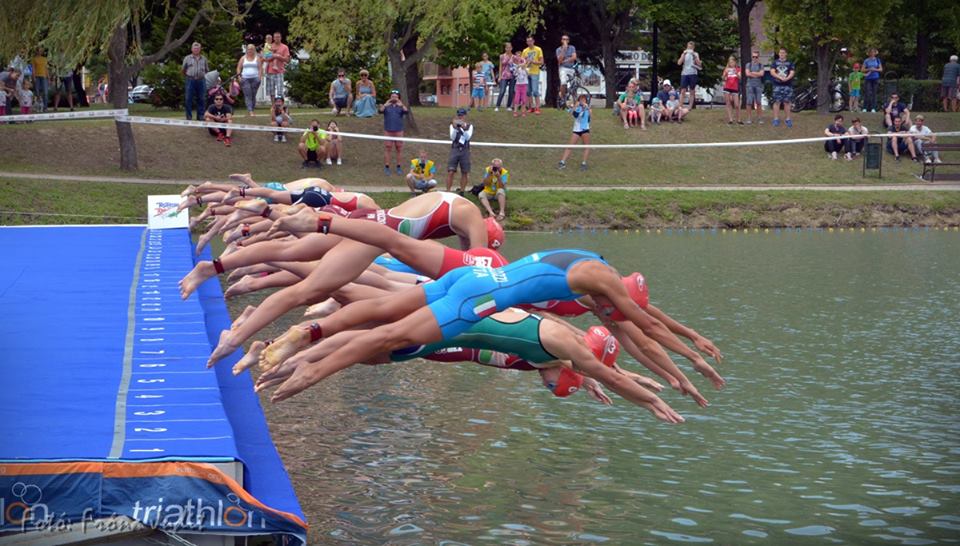 The swim was pretty intense but it was Dorka Putnóczki who exited first, almost 30 seconds ahead of the pack. 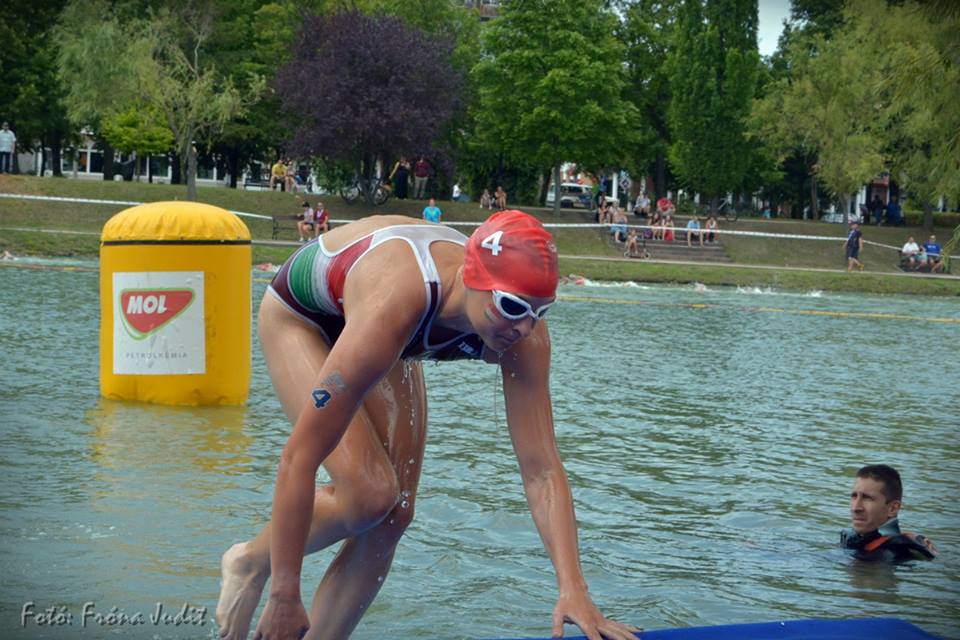 The run up to T1 did not see her pace drop and soon enough, she was out on the bike. 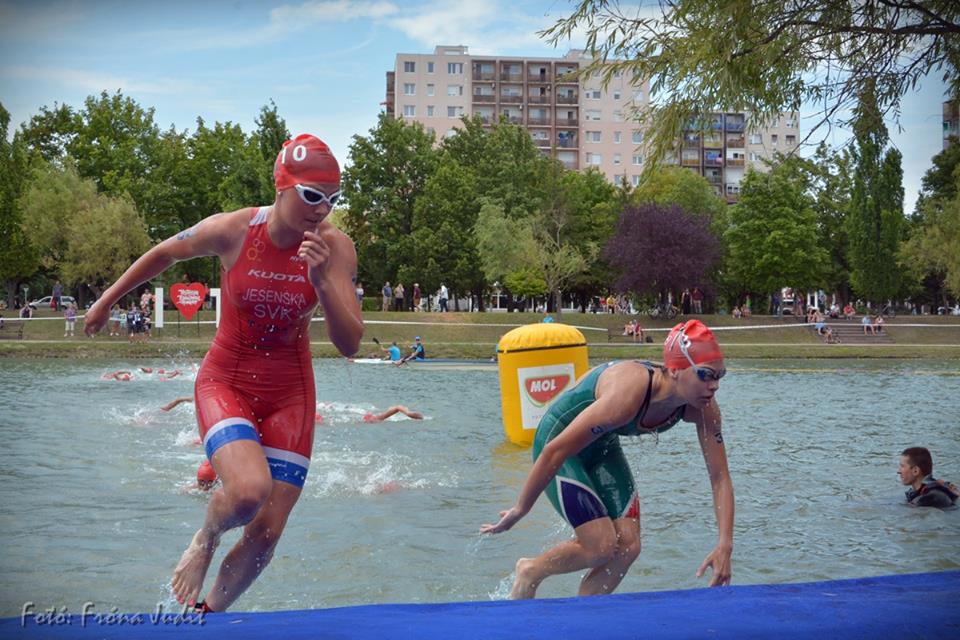 Further back, Amber Schlebusch and Kristína Jesenská emerged together with Beatrice Mallozzi some distance back. 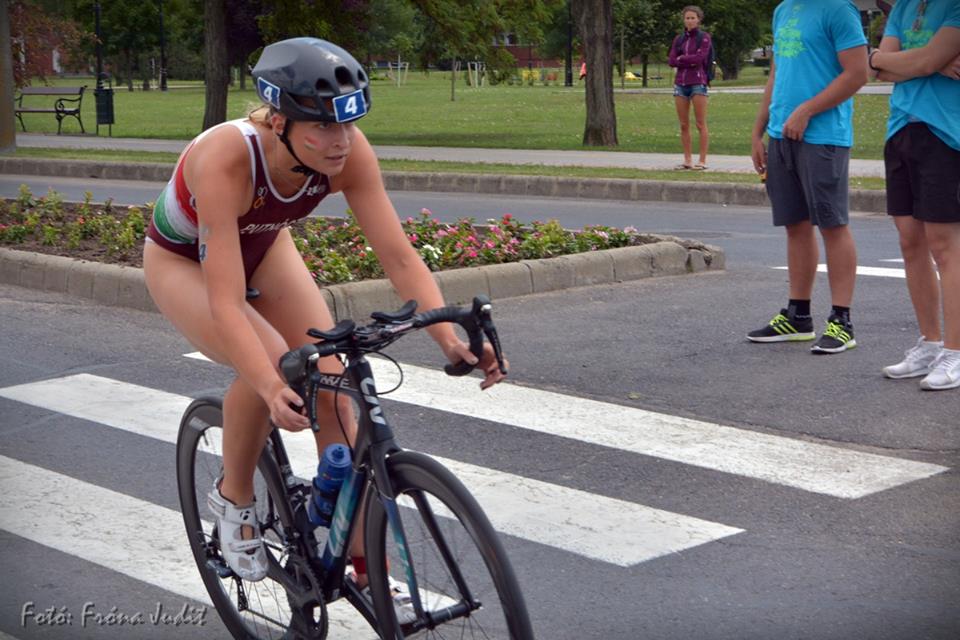 Putnóczki worked hard at the front but was alone. Behind her a large group of athletes would eat into her lead. 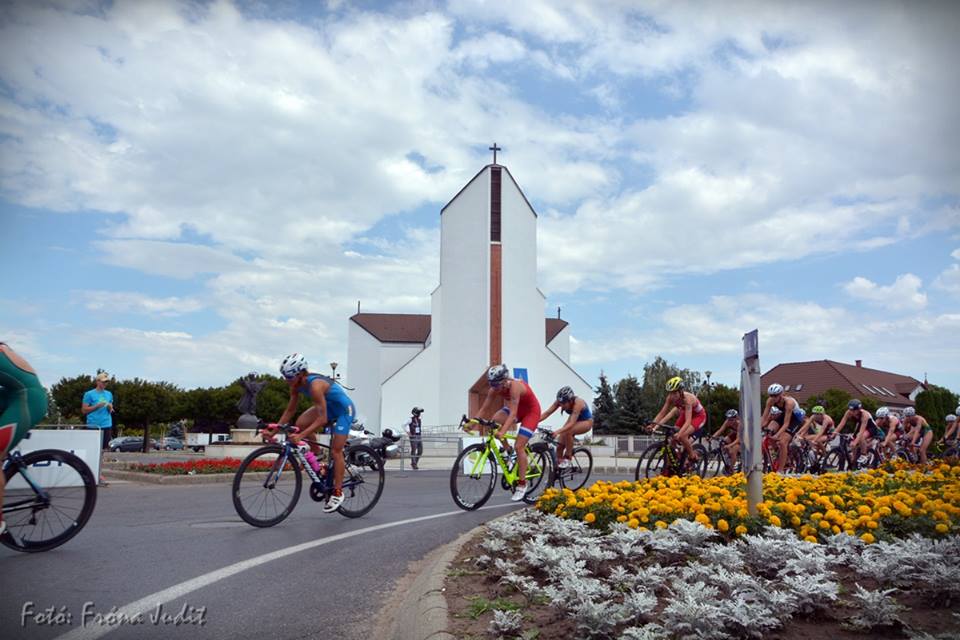 The Hungarian junior was having a tremendous ride. 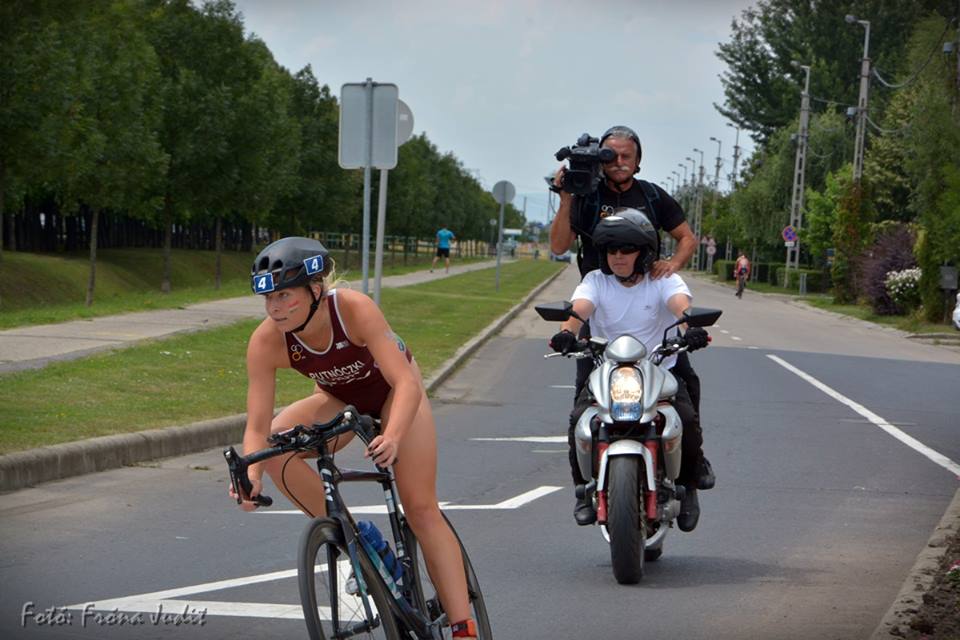 The ITU Camera Team were following her and knew that she was way out ahead of the others but that huge pack behind her was working well. 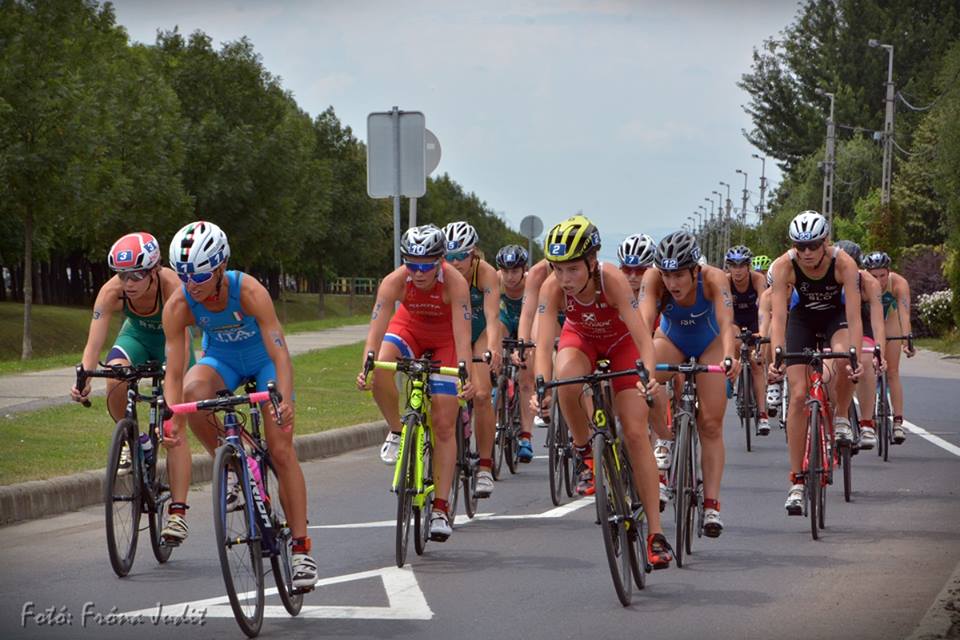 Putnóczki survived the bike and was able to rack in T2 but as she set off on the run, the chasing athletes landed on the blue carpet. 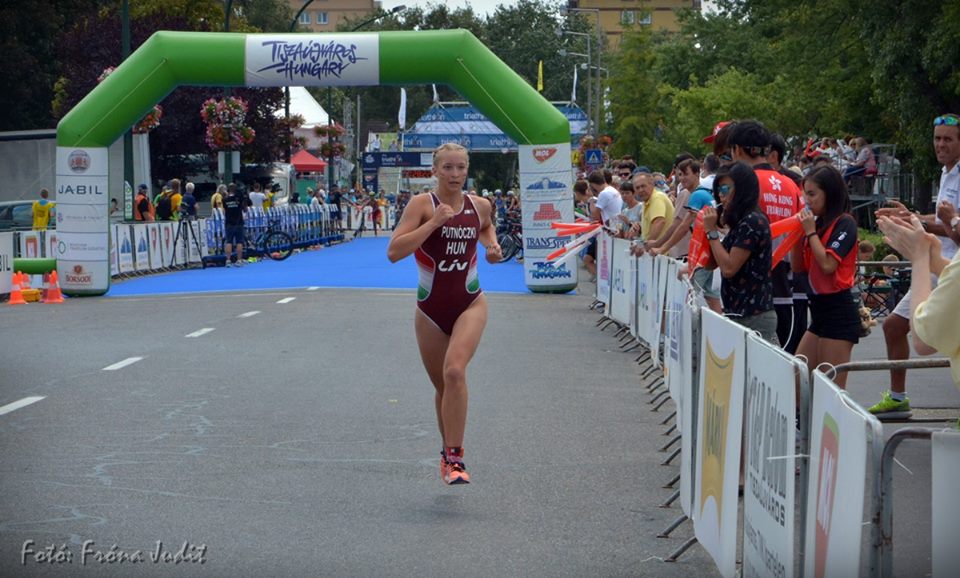 Setting off onto the run she knew that behind her would be the immense run power of her main rivals. 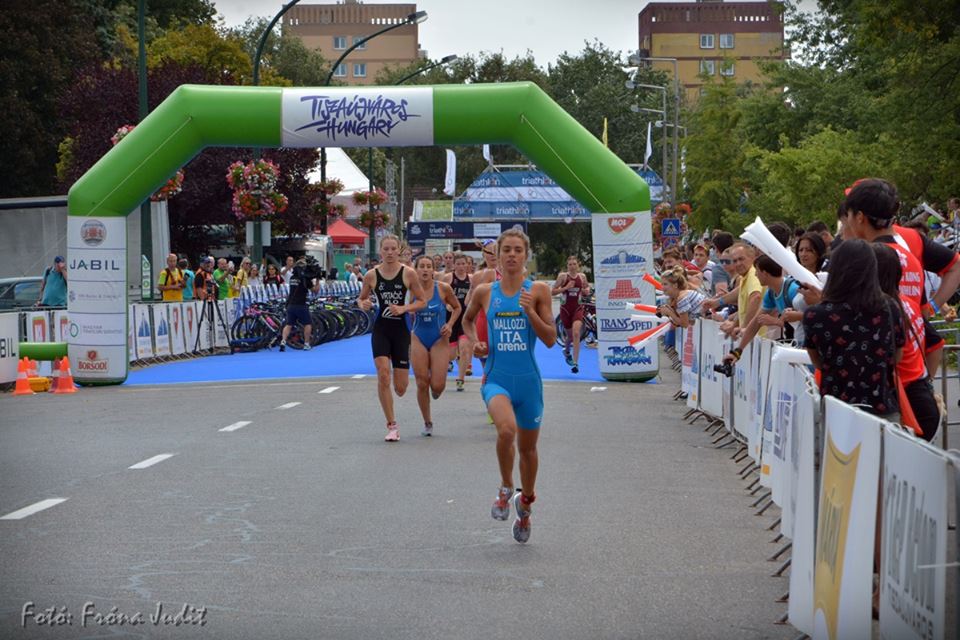 Mallozzi stormed out onto the road and behind her were Totschnig and Tjaša Vrtačič. They had the Hungarian in their sights and it was not long before she had been caught. 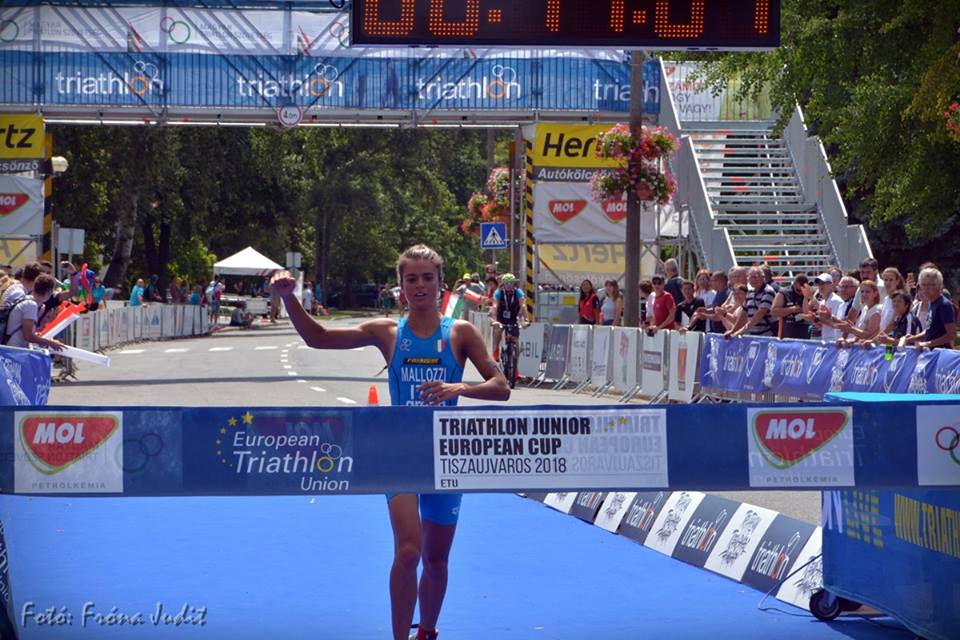 The Italian’s pace was simply too fast for anyone to match and with a masterly 12:19 to finish on the run, she crossed the line a full 30 seconds ahead of the jubilant Schlebusch. A delighted Jesenská gave Slovakia reason to celebrate and has consolidated her racing this year to show that she is a great emerging talent. South Africa will be delighted with Schlebusch’s performance. A bronze in Holten and then silver here in Tiszaújváros: we want to see her race more up here. But race of the day and performance of the day went to Mallozzi; five international starts this year. Five wins. Forza Italia !! 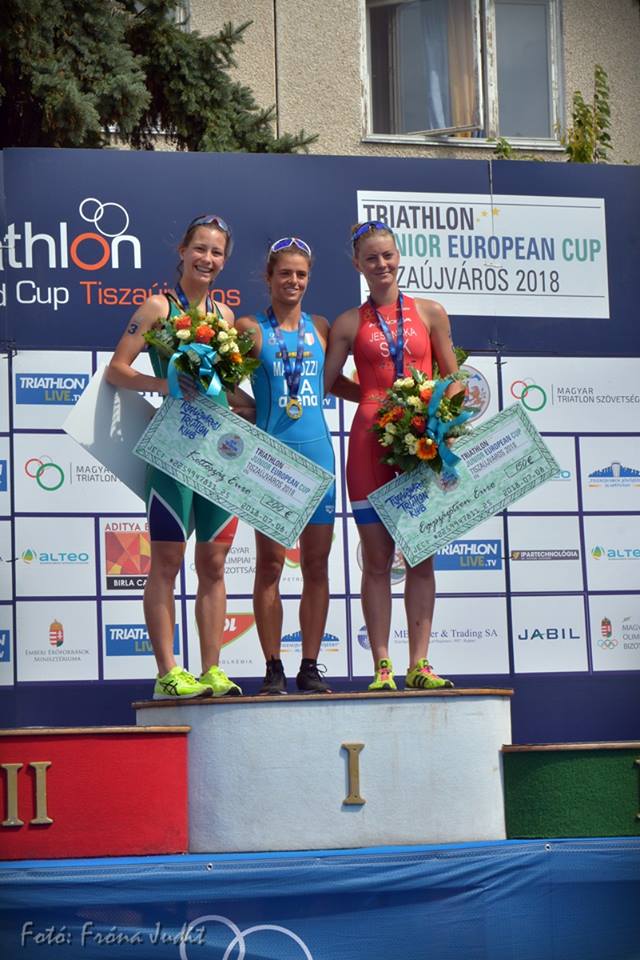 Could the men’s race be even more exciting? 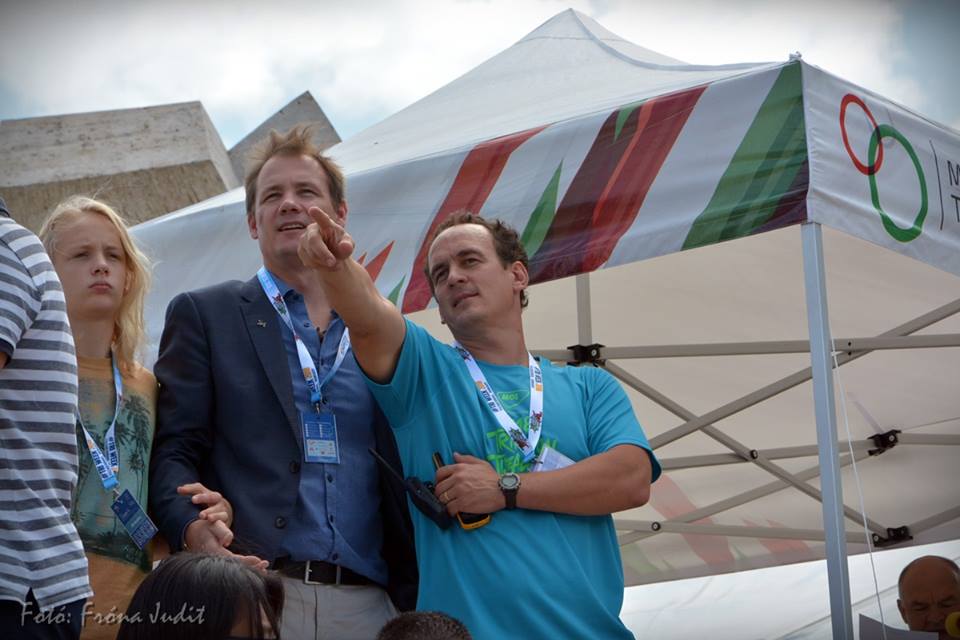 Under the watchful eye of ITU’s Gergely Markus who, with his father has invested so much time and effort into making this race the “must do” event for so many athletes, the men were introduced. 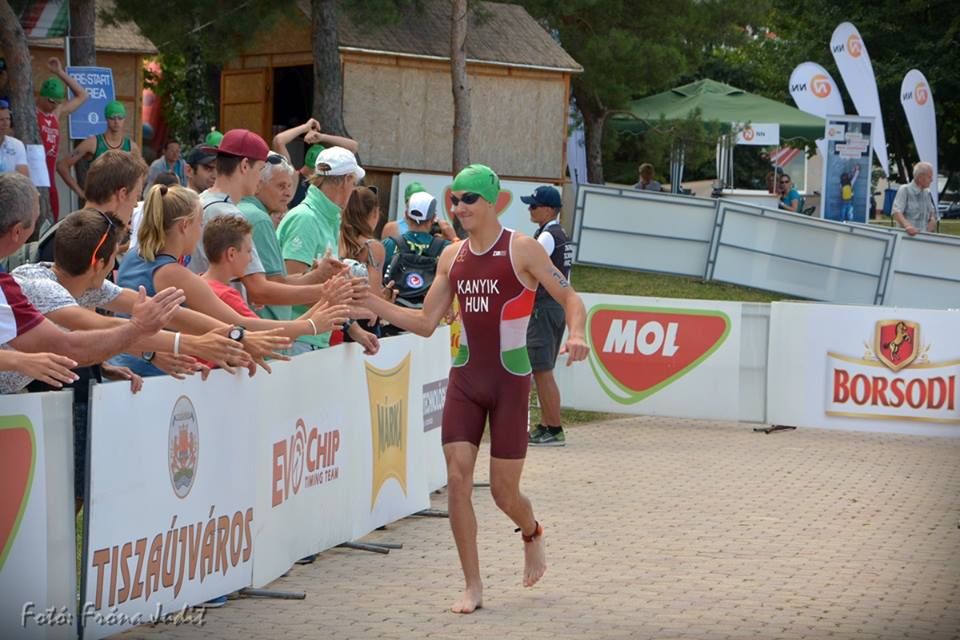 With the crowds so close, it was a real thrill for the athletes to get such adulation as they ran down to take their position on the pontoon. 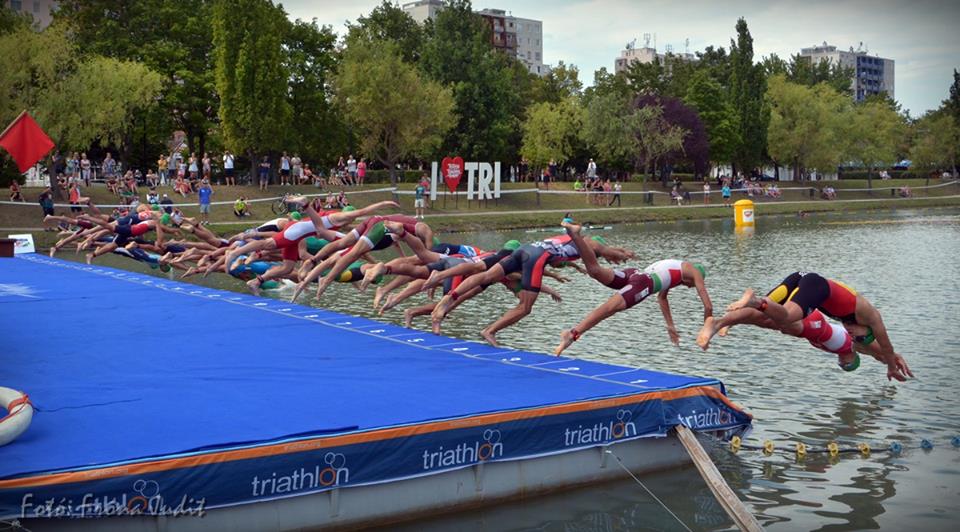 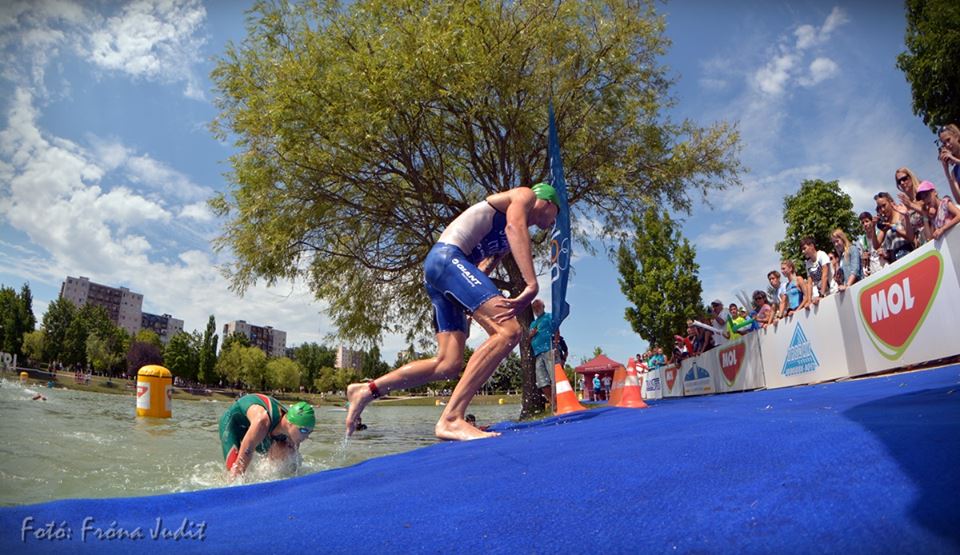 It was Max Stapley who led Riddle. Would we have a repeat of the semi-final and a photo finish? 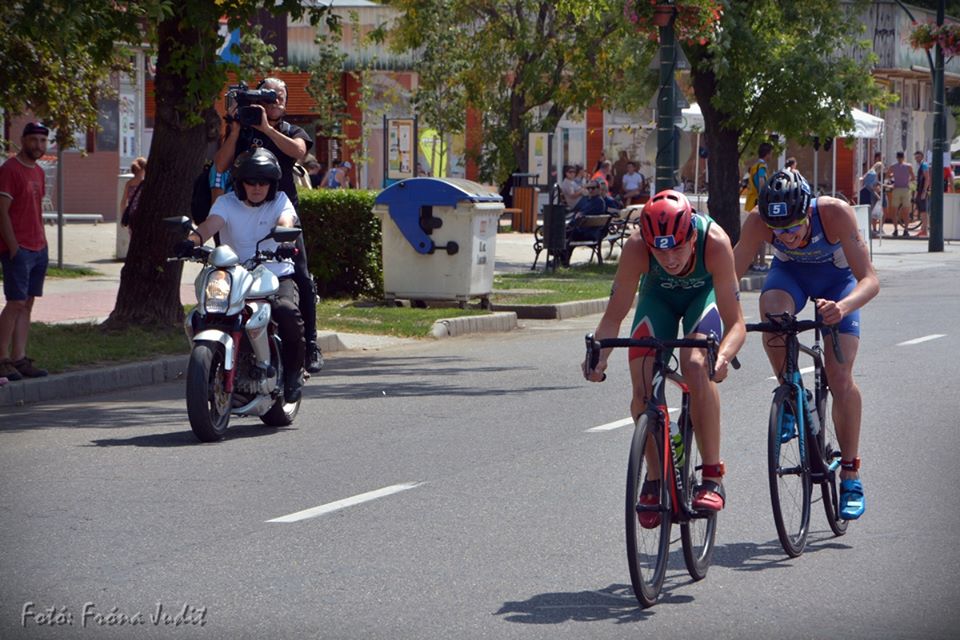 The pair worked hard together at the front, with their lead under threat from the chasing peloton. 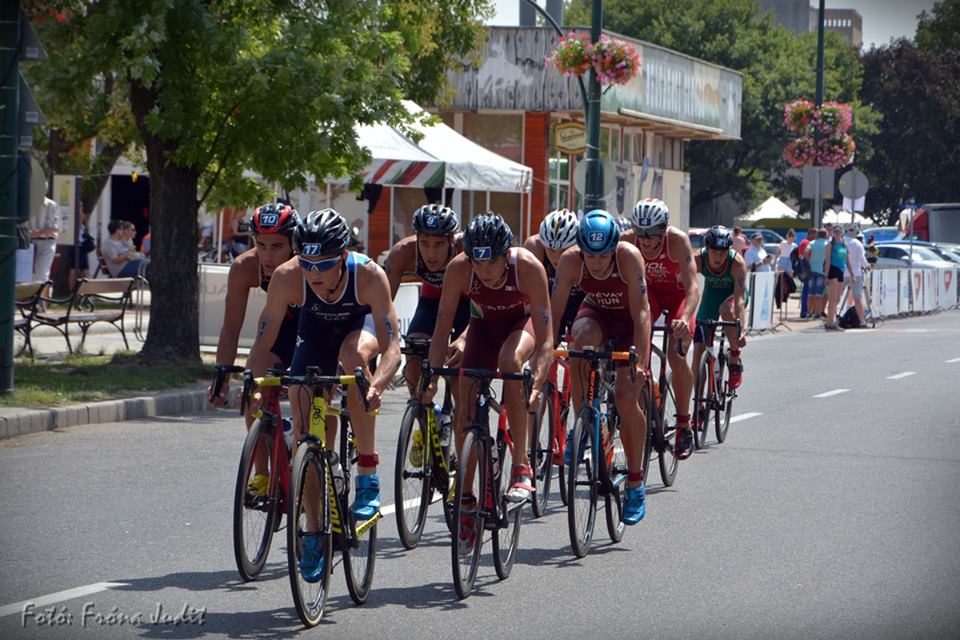 They worked well together and were able to hold off the pack. 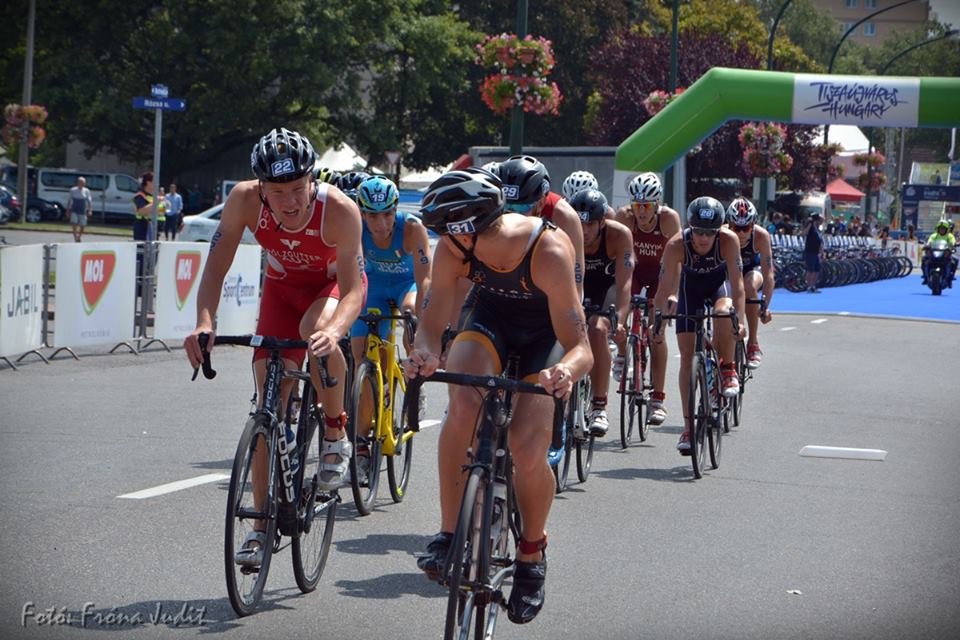 Now out on the run, had they worked too hard and used up too much energy? 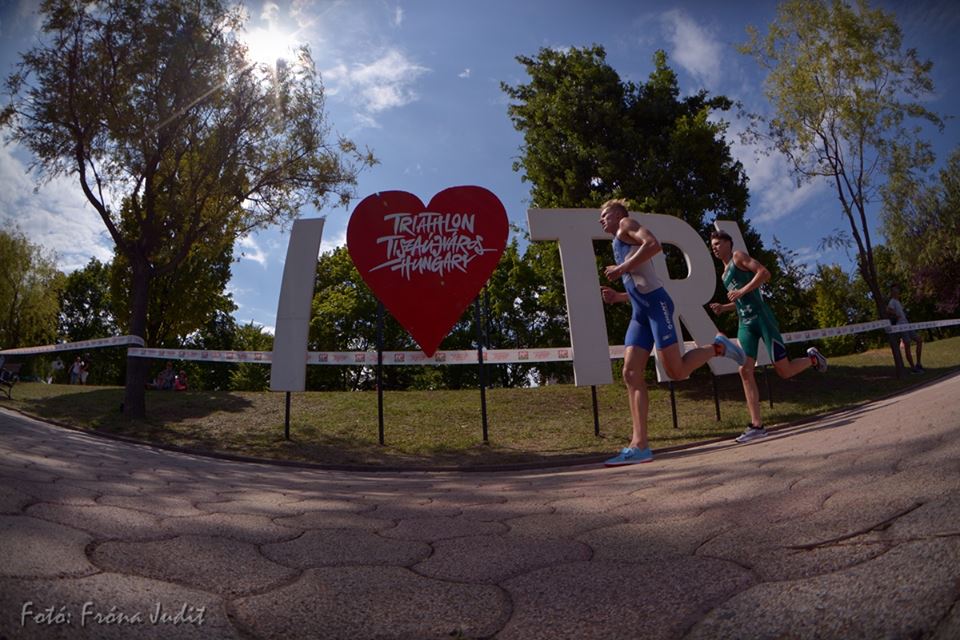 The bell lap begin and it was, to the sheer delight of the home crowds, a Hungarian in the lead. 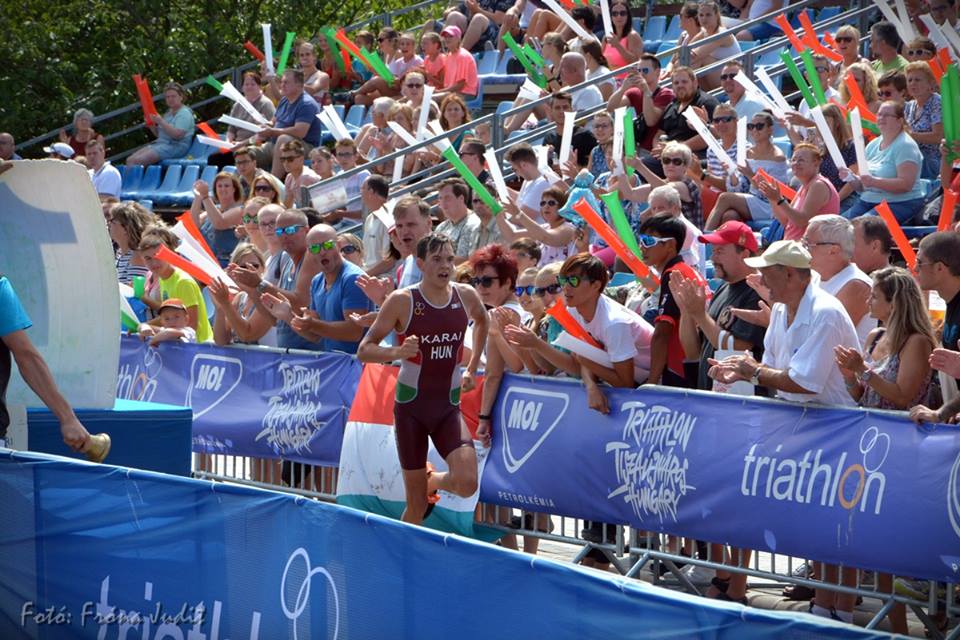 Karai had found an extra gear and was blasting through the field to take the lead. 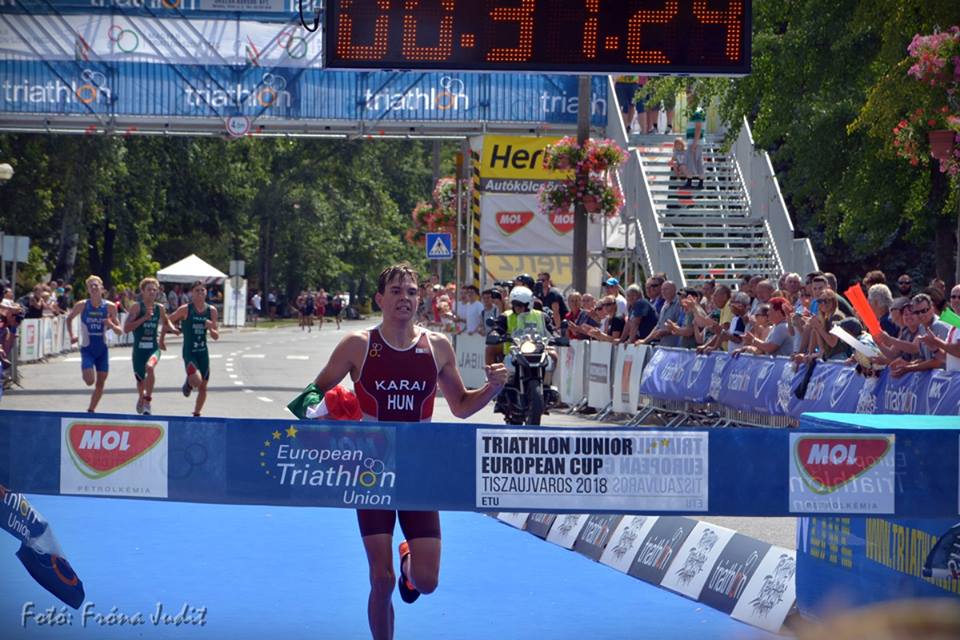 With the crowds urging him on and screaming for him to win, he took the finish tape as a drama unfolded behind him and three athletes charged towards the finish line to grab the remaining two medals. Stapley, who had done so much work, was drained and saw his hard work evaporate before his eyes as Riddle and his teammate, Ben De La Porte pipped him to the podium 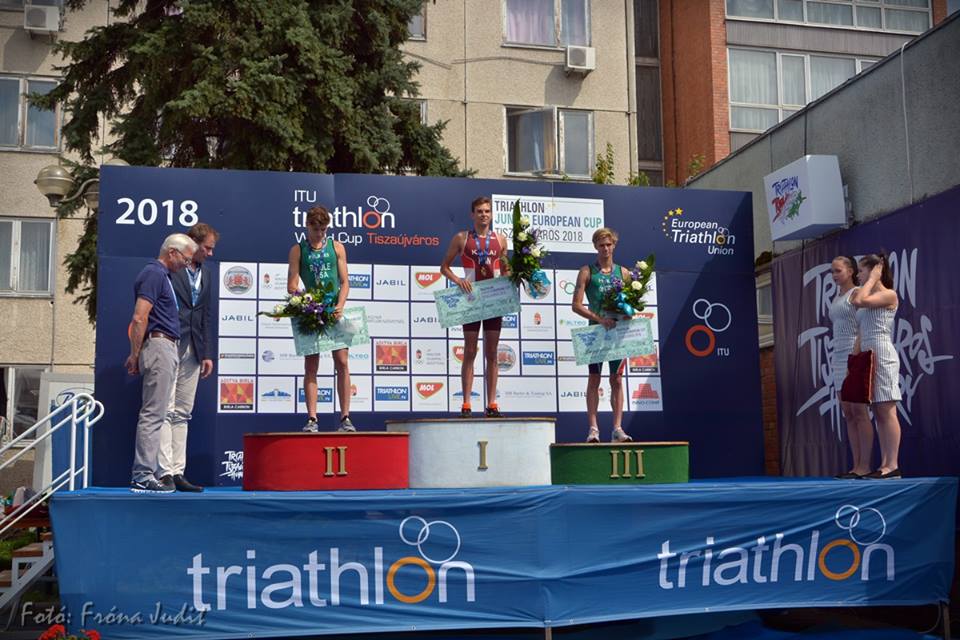 Fantastic performances from these Juniors; fantastic race once again. Tiszy may be fun, but it is not an easy course and for that reason the after party is even more of a reward. If you have never before been to this race, you really need to make a note in your diary for next year.

The ITU results computer has been working its magic and these results, added to those from Banyoles now show which nation is leading. 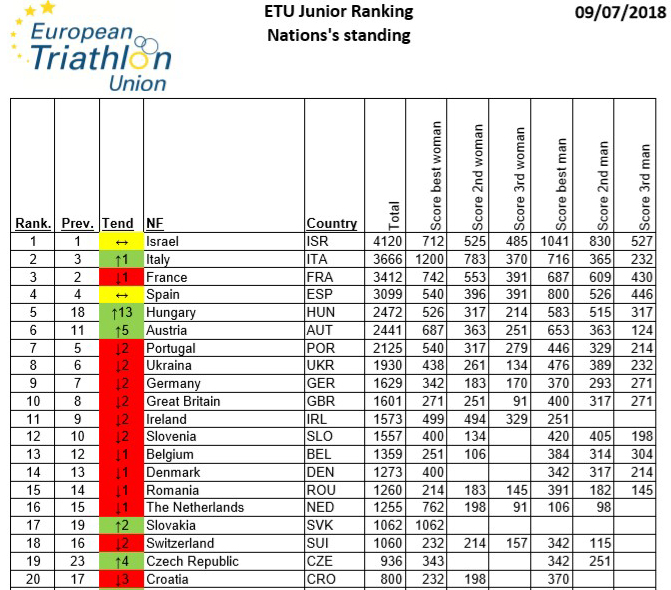 Big thanks go to Judit Fróna for allowing her photos to be used by ETU. You can see the albums on her page.