ICONIC WEEKEND OF RACING IN MUNICH

The races saw big crowds gather around the racecourse in the Olympiapark to watch the races, most athletes commented on how they had never experienced something like it. Leo Bergere who competes at world class level, winner of the Elite men’s race in Munich, said: “This is the first time I have competed with such a crowd. It felt like Alpe D’Huez during the Tour De France!”.

The president of Europe Triathlon, Renato Bertrandi, said: “Wow. It has been a fantastic week.

All our Triathlon family finally had the possibility to meet, after our President Conference, face to face in Munich. In the frame of the “European Championships” that includes Athletics, Cycling, Gymnastic, Rowing, Beach Volleyball, Climbing and Table Tennis, we had the possibility to have the Europe Triathlon Board, the yearly Congress and 3 great days of races.

The crowd that was attending our events has been much over our expectations: the official number of the first day at the women’s race was 100.000 spectators at the Park and the following days even more. On Sunday morning, before the MTR, we were also able to stage the AG event: 1.200 Age Groupers, coming from all over Europe crossed the finish line at the Olympic Park delivering a unique emotion to our amateur Athletes. We have been able to reach new people with our Sport and we will greatly benefit from this visibility. I am sure that the TV audience, as it was broadcast live in almost all Countries in Europe, will smash any previous number.

I want to thank all the NFs attending and in particular the ones that has sent the best Elite Athletes and Age Groupers. This is the support we need from you to keep Triathlon in the future into the European Championships”. The elite women’s race on Friday was far from predictable, with plenty of action to entertain all the amazing spectators scattered around the Olympia park and those watching from home.

The swim part of the race saw Sophie Alden from Great Britain come out first in 19 min and 20 sec, with a group of 5 closeby. A group managed to breakaway on the bike with most of the favorites in it, including home favorite Laura Lindemann. The chasers worked hard and tried to collaborate throughout all the bike sections of the race to close the gap. By the time they arrived in the second transition, the first group had a small gap on the second pack, with athletes putting their shoes on ready for the demanding run course. As expected, the 30m elevation gain at each lap proved decisive in determining who would end up at the front. Big crowds cheered as athletes pushed through in the heat as they climbed to then descend to the finish line. On the third lap of the run Non Stanford from Great Britain made a decisive move to breakaway from the front pack of 3 just as they neared the top of the hill, with German Lindemann and Lombardi from France struggling to keep up with the pace. The British athlete who recently competed for Wales at the Commonwealth Games, ended up reaching the finish line first to take the gold medal and become the new European Champion. The battle behind was fought all the way to the line, with Laura Lindemann using the home crowd’s support to her advantage and taking silver. Emma Lombardi from France finished in 3rd position.

Non Stanford after the race said: “I can’t believe how many people came out here to watch the race! I surprised myself out there today, I came here with no expectations after competing in the Commonwealth games recently. I’ve been pretty tired so I haven’t done much training, but I guess that means I was fresh! Delighted to come away with the gold”. 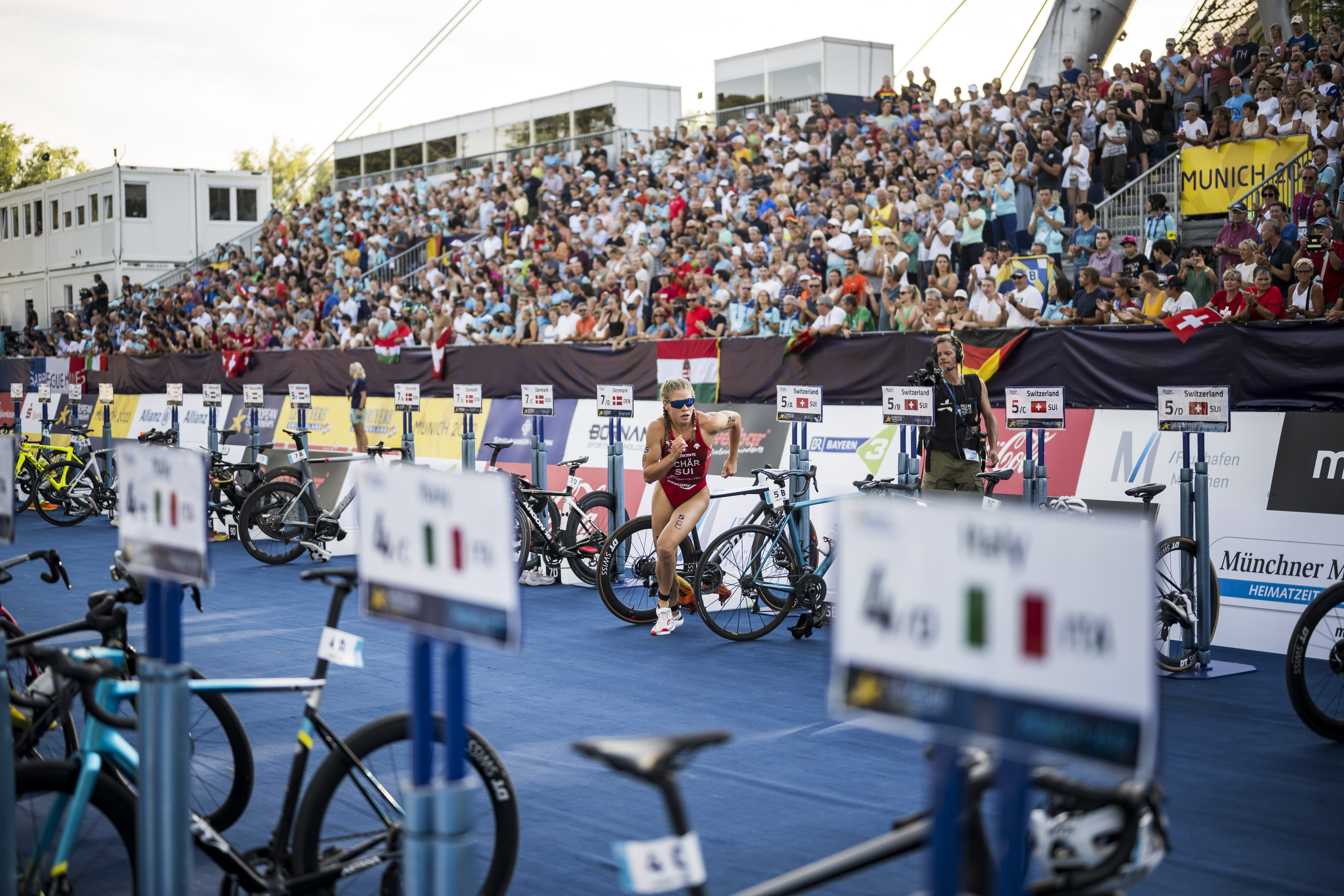 The men’s race on Saturday was action packed, with the athletes pushing each other until the last kilometers on the run.

The athletes dove off the pontoon in the water at 16:00, fighting to get in position in the first part of the swim to not get left behind at the first buoy. A group of triathletes managed to put in a small gap between them and the swim pack behind already at the end of the first lap. As they exited the water to get their bikes, the gap had grown to be bigger than that of the women’s race on Friday. Collaboration during the cycling part of the race meant that the leaders managed to grow and hold their gap to 55 seconds. The front group of roughly 10 athletes included pre race favorite athletes such as Leo Bergere, Dorian Conninx and Pierre Le Corre from France, together with Hungarian athlete Csongor Lehmann.

As they got off their bikes the leaders immediately set a high pace to narrow down the fight for the medals. The chasers, including Jelle Geens from Belgium and Braclay Izzard from Great Britain, also hungry for the front of the action, also set off at a blistering pace to try and make up as many positions as possible. Half way through the run, the French and Hungarian were left fighting for the top spots. Bergere made a decisive move to drop the others and only Pierre Le Corre could respond and accelerate. Behind, fighting for bronze, were left Conninx and Lehmann. The Hungarian managed to grow a gap but was then caught and passed by the third of the French athletes. The finish line saw a French 1-2-3, with the order not changing from the attack of Bergere. 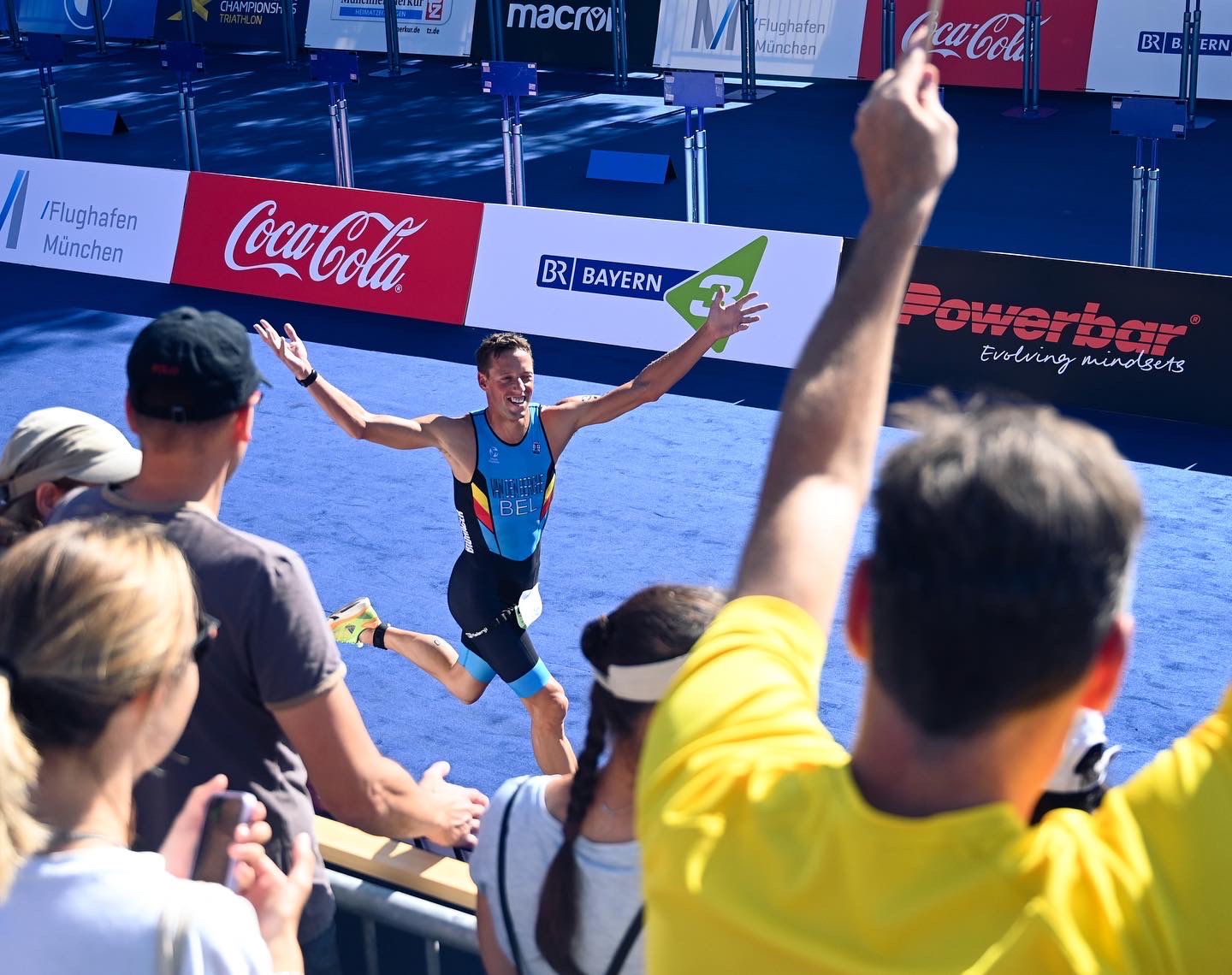 The Age Group race saw 1200 athletes from all over Europe meet in the Olympiapark to compete in the 2022 European Championships. After a welcome event and lunch on Friday, they set off early on Sunday morning in waves based on their Age Group. Although it was early, the crowds weren’t missing, with plenty of people cheering all over the racecourse. The sun rose as athletes raced to get to the finish line in their target time. 35 nations were represented and the first Kosovo Triathlete in history also got the chance to cross the finish line at these European Triathlon Championships: well done! 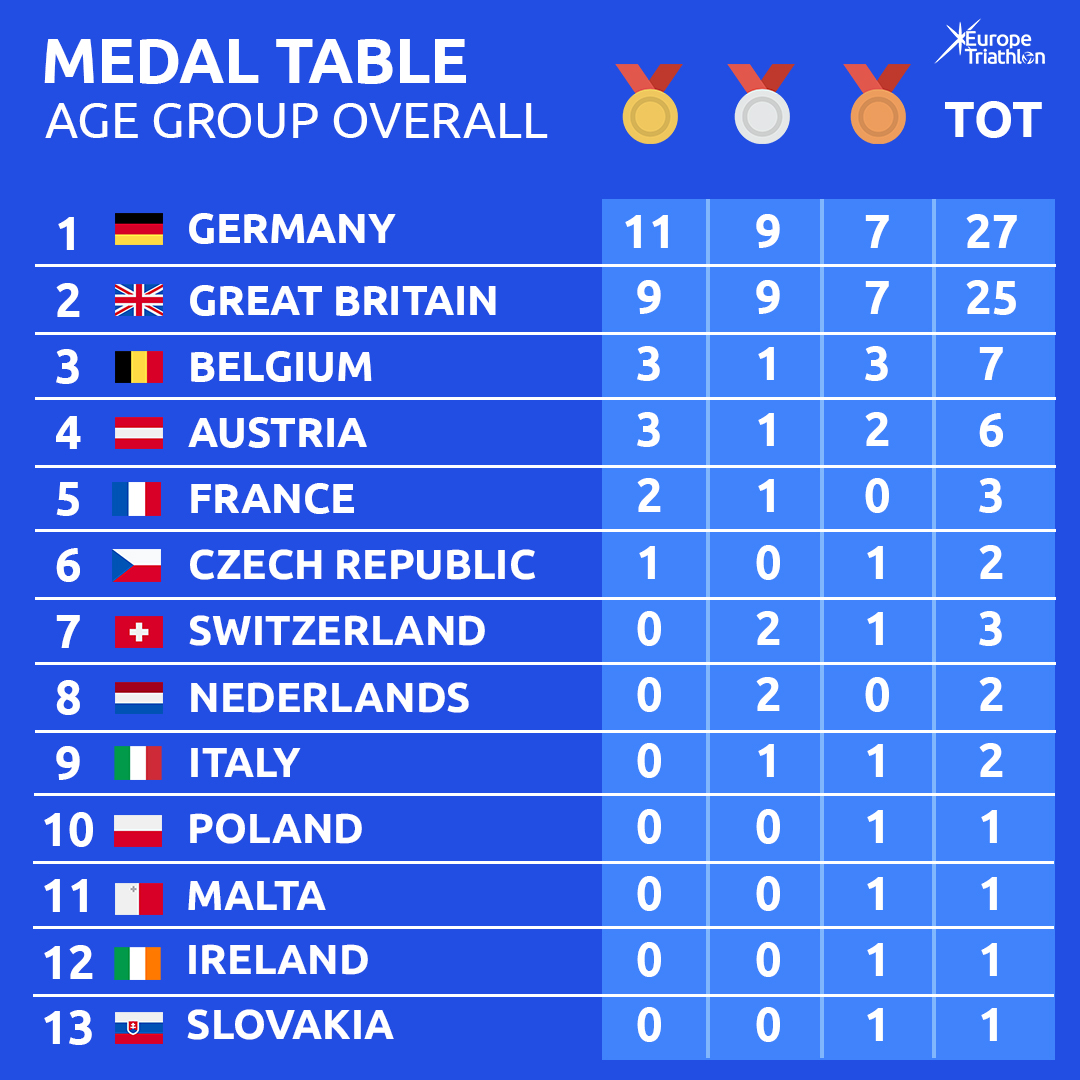 After the races, totalling all the medals won in the Age Group races, Germany emerged as the winning nation. Great Britain came second with an impressive 25 medals and Belgium third. The Mixed Team Relay on Sunday did not disappoint. After an initial leg that saw Portugal get a penalty but lead at the front alongside Switzerland and France, Emma Lombardi from the French team broke away to get a decisive lead over the chasers. The fast and furious course saw Germany use the home crowd advantage to battle ahead and join the battle for second and third place. They had the better of the Swiss team at the finish line, with Laura Lindemann running her way to second place. France took the win in commanding fashing and Switzerland came third.

We would like to thank everyone who watched online or had the opportunity to be at the venue to cheer for athletes of all ages from all over Europe. It was a weekend of racing we are sure won’t be forgotten for a long time