The Munich European Championships 2022 is the largest multisport event in Germany since the 1972 Olympic Games - and we’ll all celebrate together! Together we will bring life back to stadiums and arenas. World-class racing, breathtaking suspense and a unique atmosphere await you. Still excited?

The biggest sporting event since the 1972 Olympic Games is livening Munich up. 9 European championships in 11 days, with the Olympic Park at the heart of it. In the thick of it and all around: The Roofs – Cultural Festival of Munich 2022. A festival of variety and surprise, The Roofs is accompanying the European Championships Munich 2022 with a mix of music, culture, arts, food and many more. The park is turning into the hot spot of the summer – for young and old alike. Rather small-town charm than giantism. The Roofs is a special place of experience and adventure for both visitors and participants.The park will be turning into the summer’s place to be, with plenty on offer for young and old alike, for him, her, them, and us. Greatness in a cosy setting, The Roofs is not presenting itself as a festival of superlatives, but rather a special place of experience and adventure for both visitors and participants.The concept of pop-up experiences is creating a novelty setup and setting the stage – literally and figuratively – for the unexpected. The traditional event setup with the bundling of theme-specific contents in the same area is rearranged for The Roofs. Individually themed worlds will be created and spread across the entire Olympiapark, the Königsplatz and the Olympic Regatta Centre Munich – each with its own character in terms of content and design.The programme is a tribute to 50 years of Munich Olympiapark and symbolises the variety of this unique location, its history, present, and future. The individual roofs – differing in size – convey a small-town charm rather than giantism and focus on uniqueness rather than uniformity.

FOOD AND DRINKS: All culinary cravings are well catered for. The Roofs takes foodies on a culinary journey through Europe: whether it’s traditional, international or crossover cuisine, everyone will get their delicacies and their money’s worth.

ARTS: Art is the daughter of freedom, as Friedrich Schiller already acknowledged. The Roofs provides art with space to develop and reflects the range of creativity. Fine arts, rhetoric, crafts, and design present themselves in full grandeur.

CULTURE: The name says it all. The Festival of Munich 2022 is based on the diversity of culture. Dance or theatre, film or comedy, magic or musical - culture is colourful, creates a wow effect, reflects the local colour or presents itself with international flair. This is also the case in Munich.

MUSIC: Soft tunes and big sounds. Mellow melodies and groovy beats. Music is connecting. Music is moving. Music is inviting to dance and dream. And so it is more than just beautiful entertainment, it is an essential part of The Roofs. 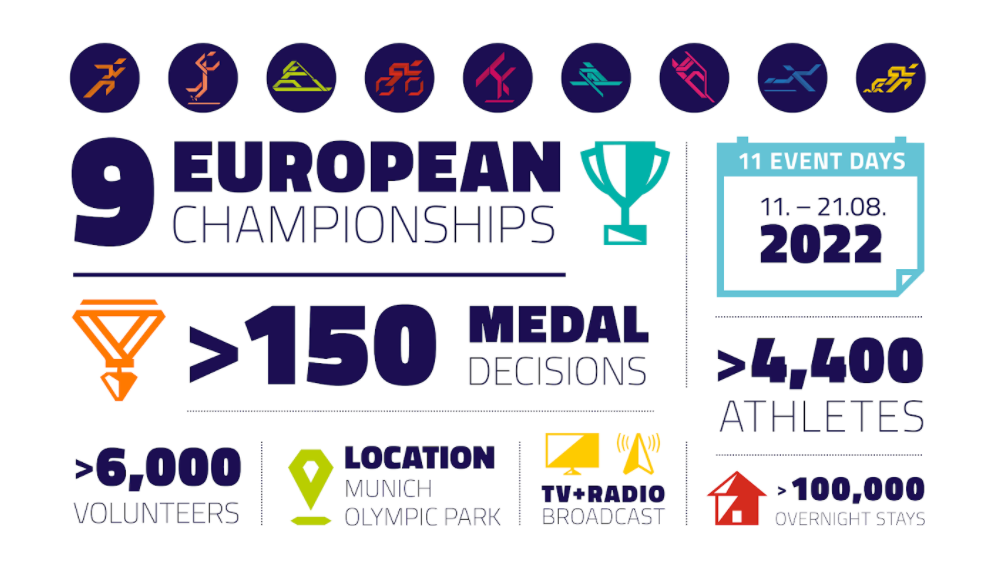 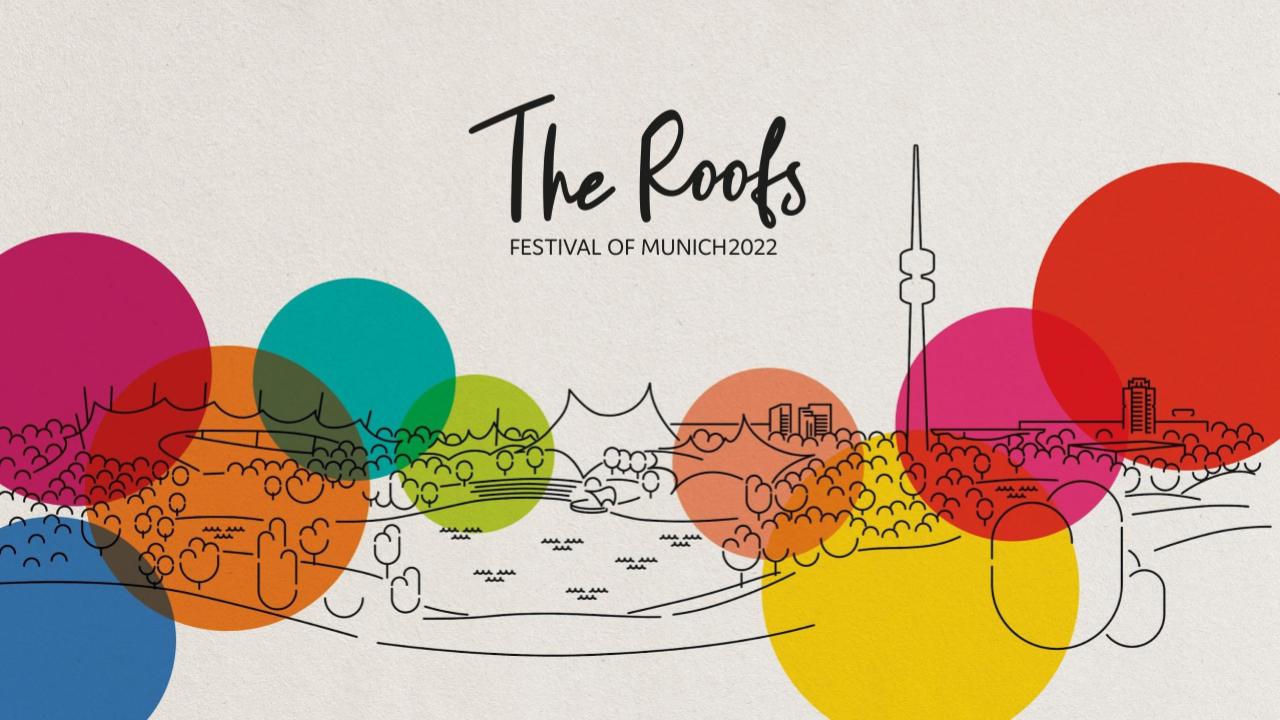 Tickets are now available for purchase and for more details, head to the Munich 2022 website: https://www.munich2022.com/en/tickets

You can buy tickets for any sport, check out the images below for more informations! 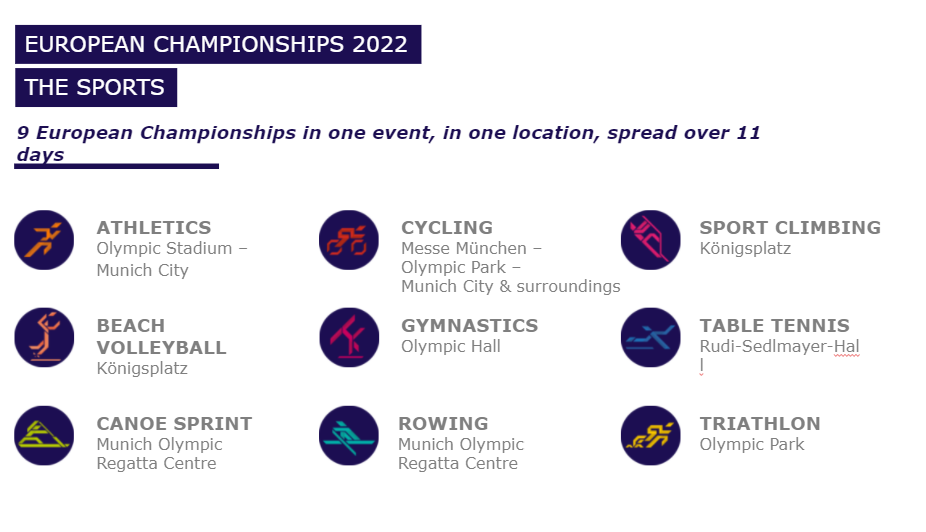 We recommend to check out this wonderful video about the event. Back to the Roofs #munich2022 https://www.youtube.com/watch?v=pnl4tkjBPMM&t=101s

We are delighted to announce that Triathlon will be present at the Munich 2022 European Championships once again for the 2nd edition of the event! True to the organisers’ motto of hosting the 2022 European Championships as centrally as possible, the triathlon will take place in the heart of Munich.The competitions start with swimming in the Olympiasee. The following cycling and running courses lead the triathletes through and around the Olympiapark.

As a bonus because we felt like it, the triathlon event will be free to access by the public and yes, even the 3000 to 4000 seats around the beautiful course going through the Olympiapark. 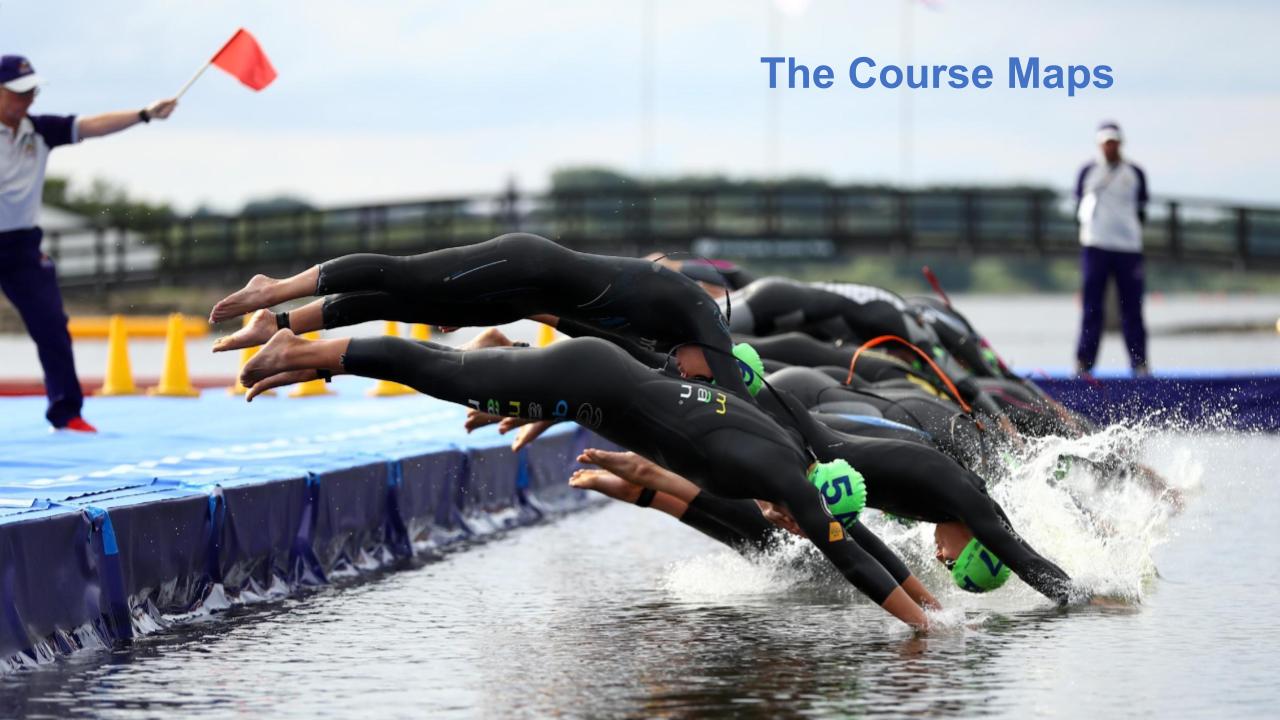 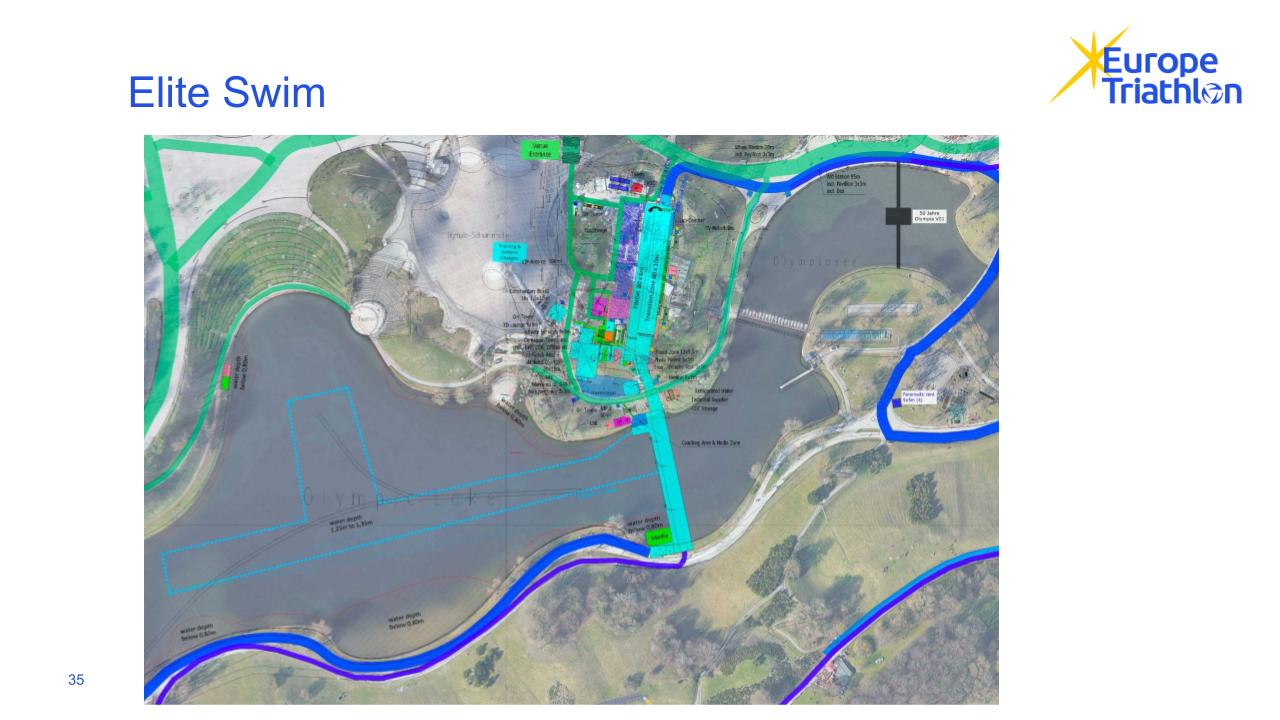 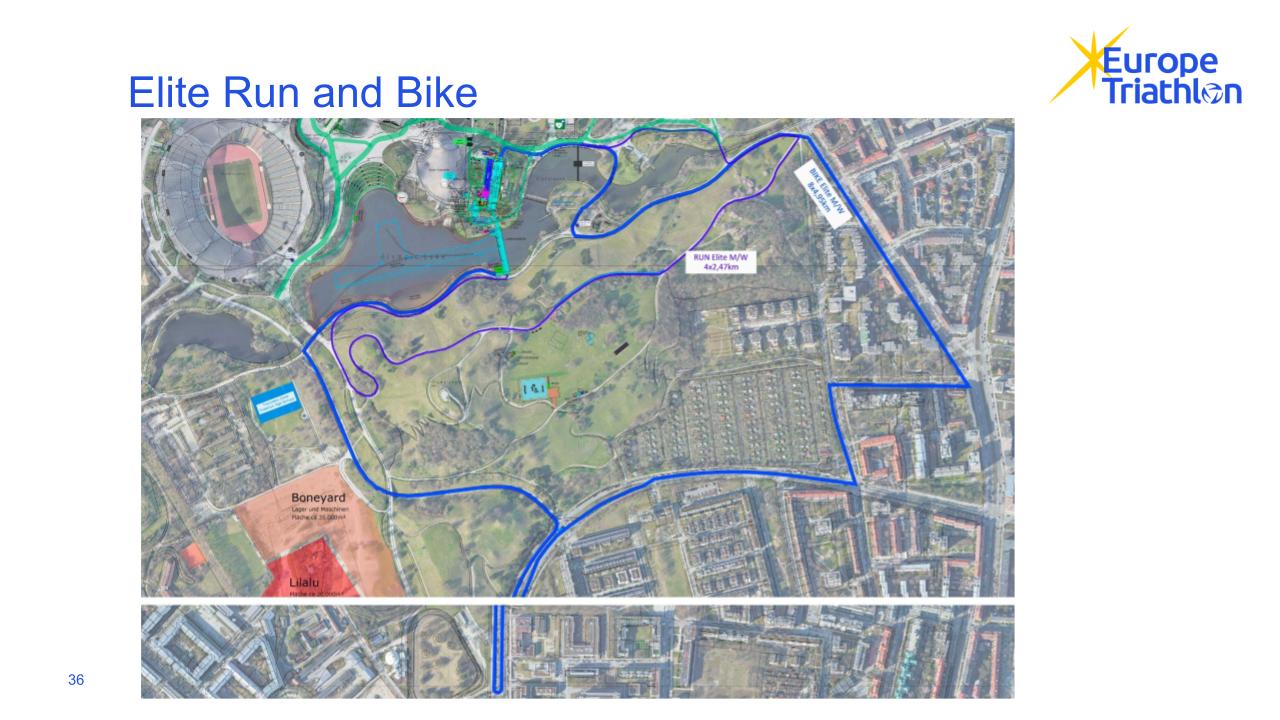 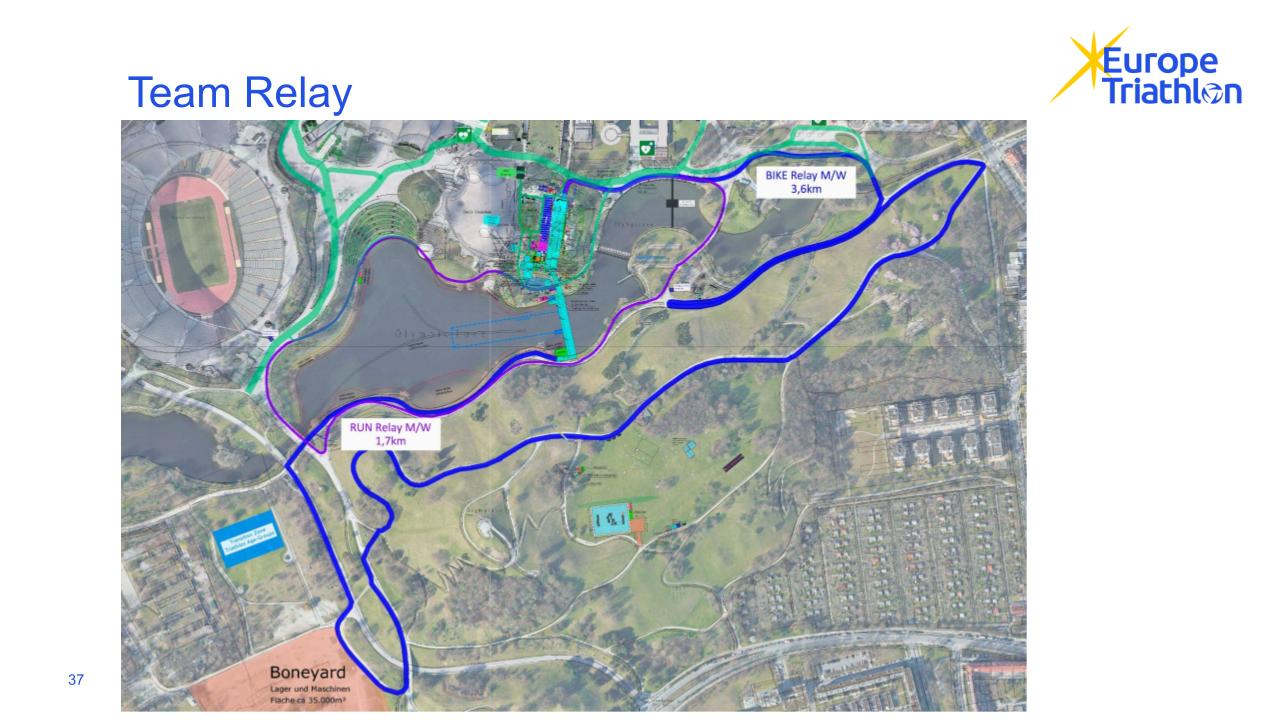 The standard distance triathlon as contested at the Olympics is the classic among the different distances and will be part of the European Championships Munich 2022. The format starts with a 1.5km swim, followed by a 40km bike ride. Whoever finishes the final 10km run first will be crowned European champion. All three disciplines will be held on fan-friendly circuits in and around the Olympiapark. In the Mixed Relay, consisting of two women and two men, the same sub-disciplines will be completed - but shortened. In the order of woman, man, woman and man, each team member has to swim 300m, cycle 6km and run 1,500m. The shorter race distances make for a varied, exciting and, above all, crowd-friendly competition.

AGE GROUP RACE
The Europe Triathlon Age Group Sprint Championships will be integrated into Munich 2022. An international championship is the highlight of any amateur’s triathlon career. The stage is set accordingly for a grand performance: The course will lead approximately 1,000 athletes from Karlsfelder See all the way to the iconic Olympiapark and the coveted medals.

- Sprint Distance
- Swimcourse and start of the race at Lake Karlsfeld
- bike route from the lake via the region of dachau to the olympiapark
- Running inside the Olympiapark with spectacular Points and a great atmosphere while crossing the “stadium” twice, which is also used at the elite race
- Same finish line as the Elite

The registration for the age group event is only possible via the respective national federations. Each nation has 20 slots per age group (Germany as host nation has 25) and might set up individual qualification criteria. After selection the federations register the athletes in the World Triathlon Entry System.The World Triathlon Entry System will be open for registration from December 1, 2021, until June 24, 2022. Check with your own National Federation for their qualification criteria and application deadlines.The entry fee is 170 €.

The team from the European Championships Munich 2022, the German Triathlon Federation and Europe Triathlon is looking forward to welcoming you in Munich next summer!