The last races of the 2018 season are complete.

The double-checking of all results has been done by the ITU Results Team.

So, ahead of the reports from Ibiza, let’s share the final ETU Rankings.

Topping the Elite, after an intense race in Funchal, it was Ukraine’s Yuliya Yelistratova, who wins the series for the 4th time. This is quite some record but when you think, her first international race was back in 2004 and since then she has won 26 of her races, been on the podium 57 times. Yelistratova was just 50 points ahead of Russia’s Alexandra Razarenova. She began her racing in 2005 and just like Yelistratova was ETU U23 Champion (2011). These two well-established athletes were comfortably ahead of Germany’s Lena Meißner, whose stunning second place in Funchal this weekend took her way up the rankings.

The Men’s ranking race was equally thrilling with Márk Dévay HUN, racing so consistently throughout the season coming to the Funchal Cup Final in a strong position. It looked as if it would be him and Spain’s Roberto Sánchez Mantecón who would share the top placings but a supreme effort from Marten Van Riel and lost time in transition, pushed the Belgian up the rankings and the Spaniard down to third. These three athletes were comfortably ahead of the remaining end of season cash-winners and it was great to see all the top ten athletes at the cup final.
This year the ETU Executive Board agreed that it would be a great idea to reward the U23 athletes as well as the Elite and so €15,000 was made available for the top ten best-performing athletes. 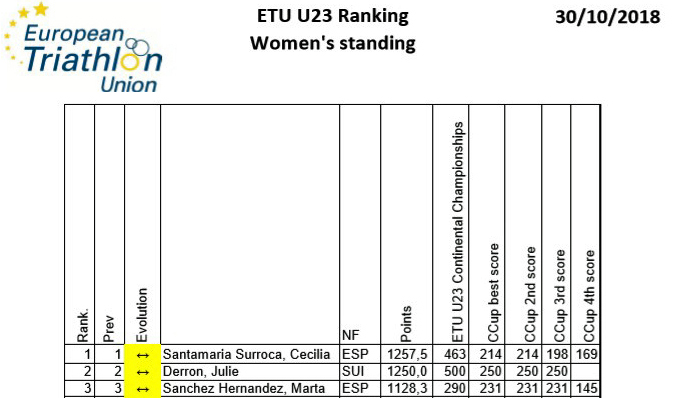 With double-points on offer at the ETU Eilat U23 Championships, the champion swept away the highest amount of points but that was not enough to topple Spain’s Cecilia Santamaría Surroca, who had been racing the ETU circuit and collecting valuable points on the way. Her rankings victory over the new U23 champion from Switzerland, Julie Derron, was by just 7.5 points. Spain claimed third place too with Marta Sánchez Hernández, who had been racing well all through the season but whose finish time in Eilat just edged her down. 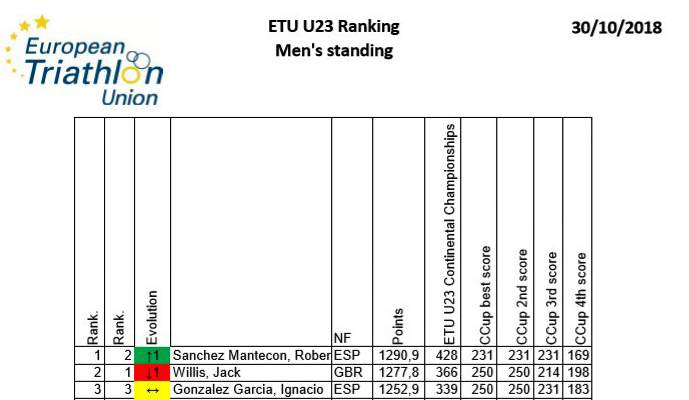 Amongst the men, it was not so close but still enough to get you onto the edge of your seat if you were watching on line. Roberto Sánchez Mantecón had a good performance in Eilat to add to his consistent racing and was 13 points ahead of Britain’s Jack Willis, who gave us that amazing finish in the relays in Eilat. The Spanish Federation has everything to celebrate about as the third place was filled by Ignacio González García.

The points were collected by athletes during the season and, in line with the published guidance, the prize-money will be paid out from ETU HQ.

Each year ETU has provided substantial funds to the Junior athletes at the end of the season and this year it was not just the major players but also the Category 2 & 3 nations who got to share the money that will be used to further develop the sport in their own countries. 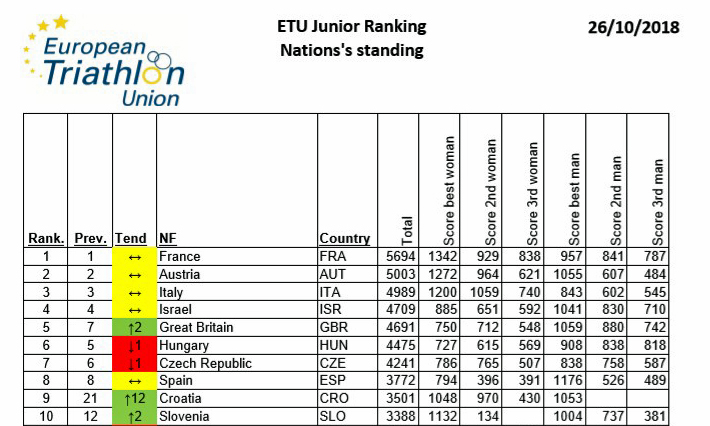 France, Austria and Italy topped the table to share the €10,000.

It was Croatia, Slovenia, Romania, Slovakia and Latvia who share the remaining €10,000,

To see the rankings, please click this link. This will take you to the Continental Rankings and all other ranking tables can be found there, providing an interactive record of races and results.

ETU would like to say a big thank you to all those athletes who supported the ETU Calendar and who gave us so many great memories throughout 2018.

Claim form can be downloaded here.