Coninx leads home for the Elite Men in Quarteira

A huge line-up of Elite men filled the beach. The winds were strong. 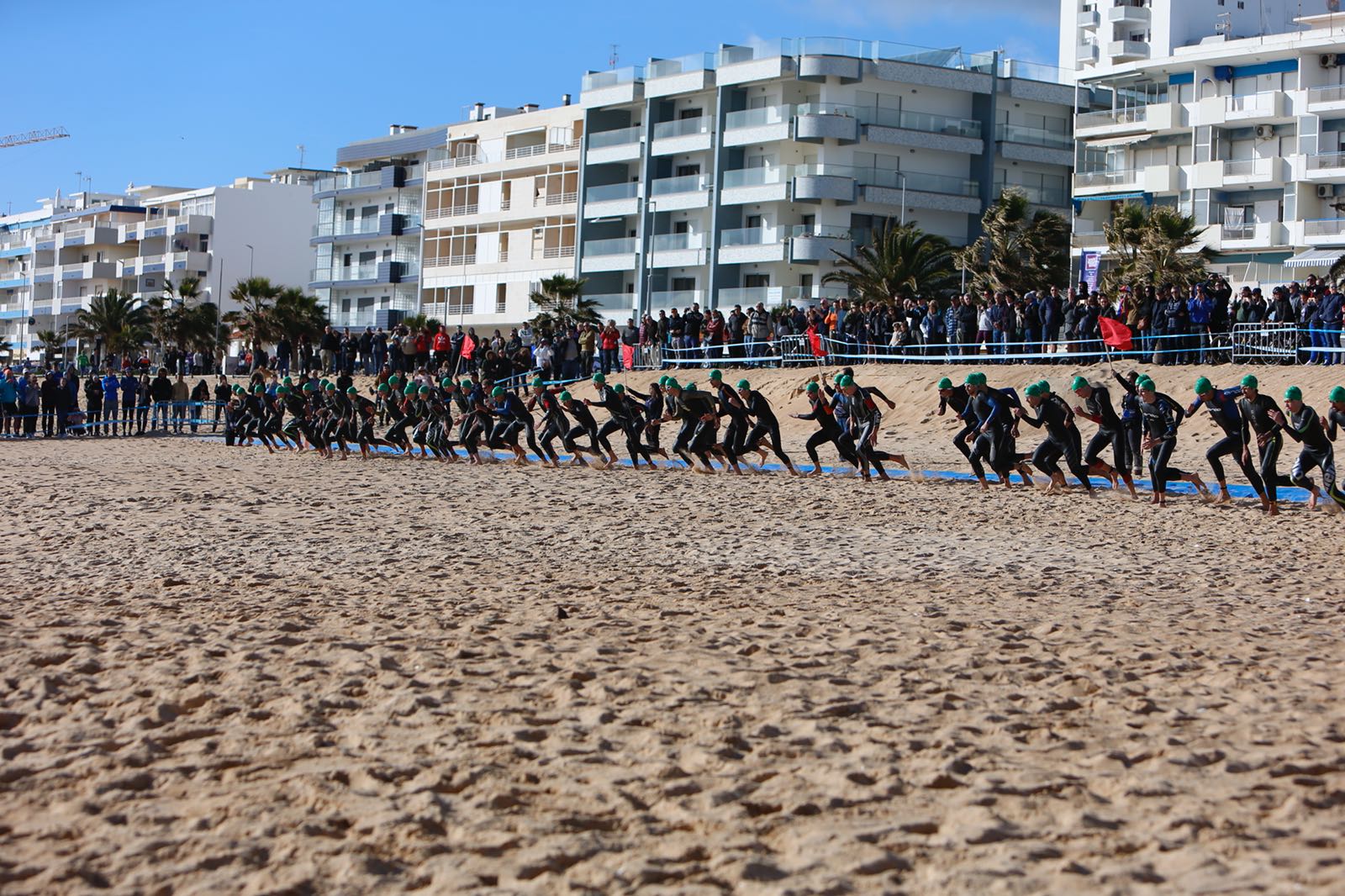 The water was big and the run down to the sea was spectacular. 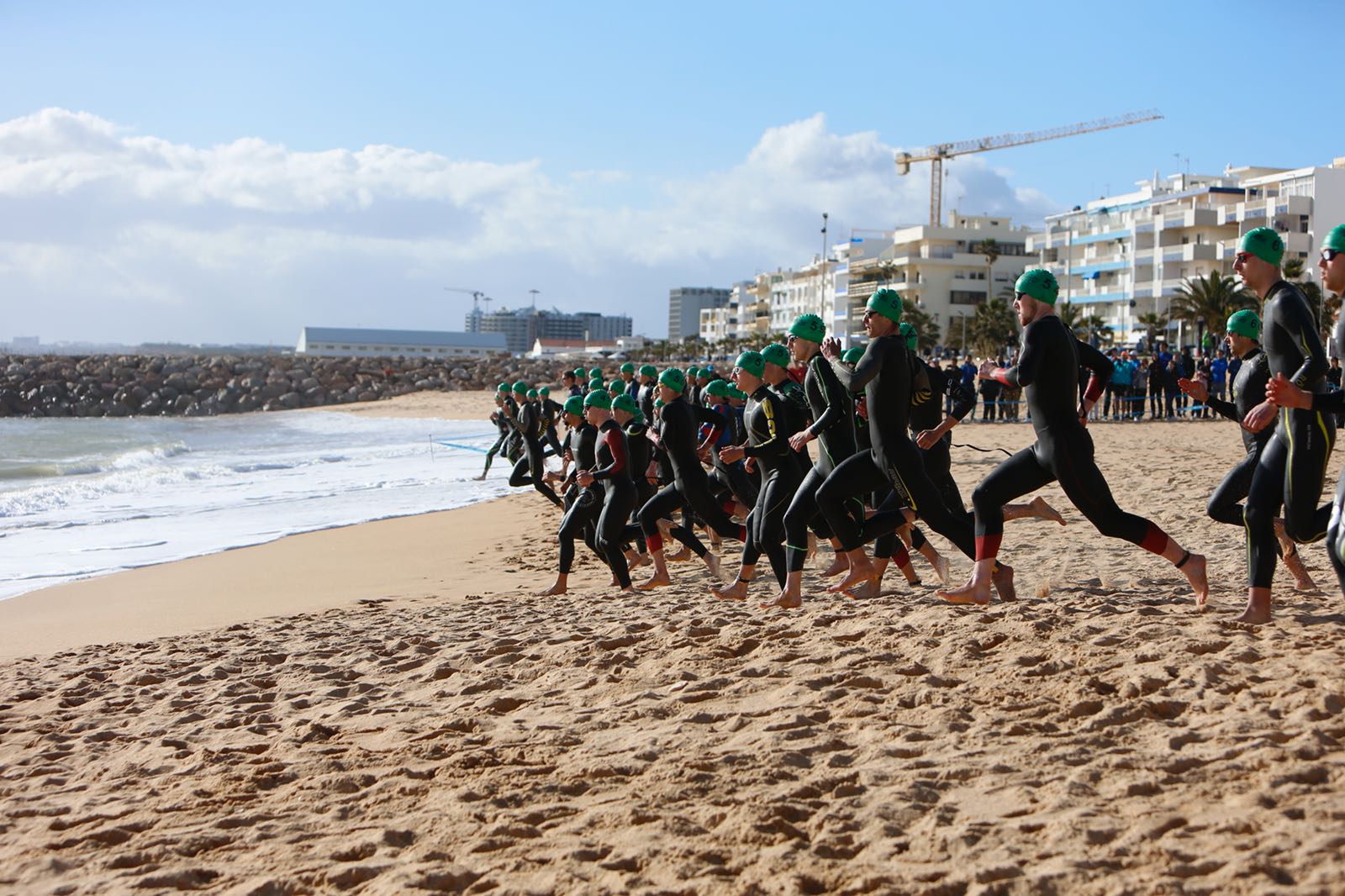 Click the picture below to see the start on video. 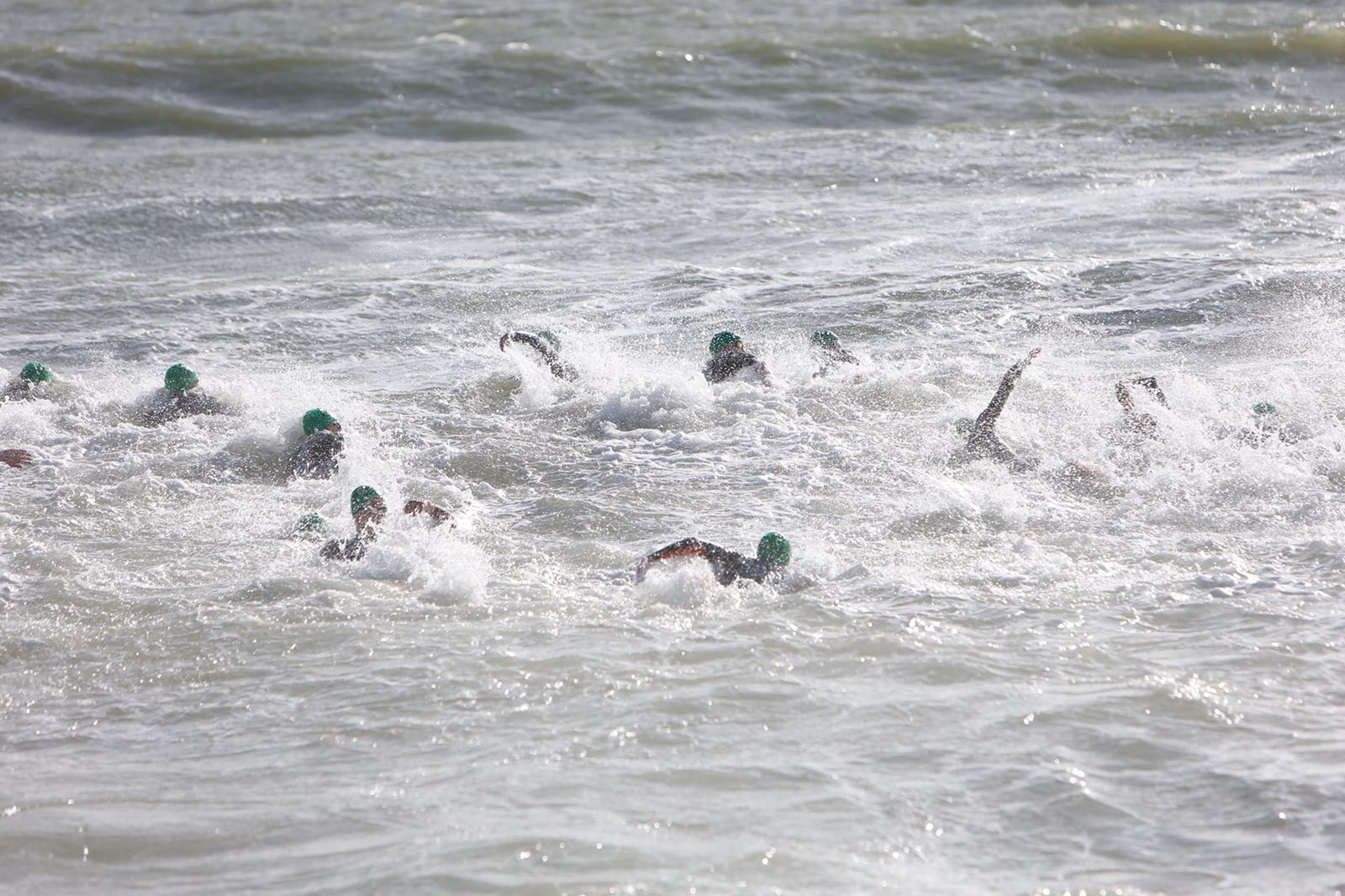 With the athletes fighting the waves there was a huge group trying to negotiate the turn buoys but slowly a lead was established as the turns were completed and as the first laps was over. 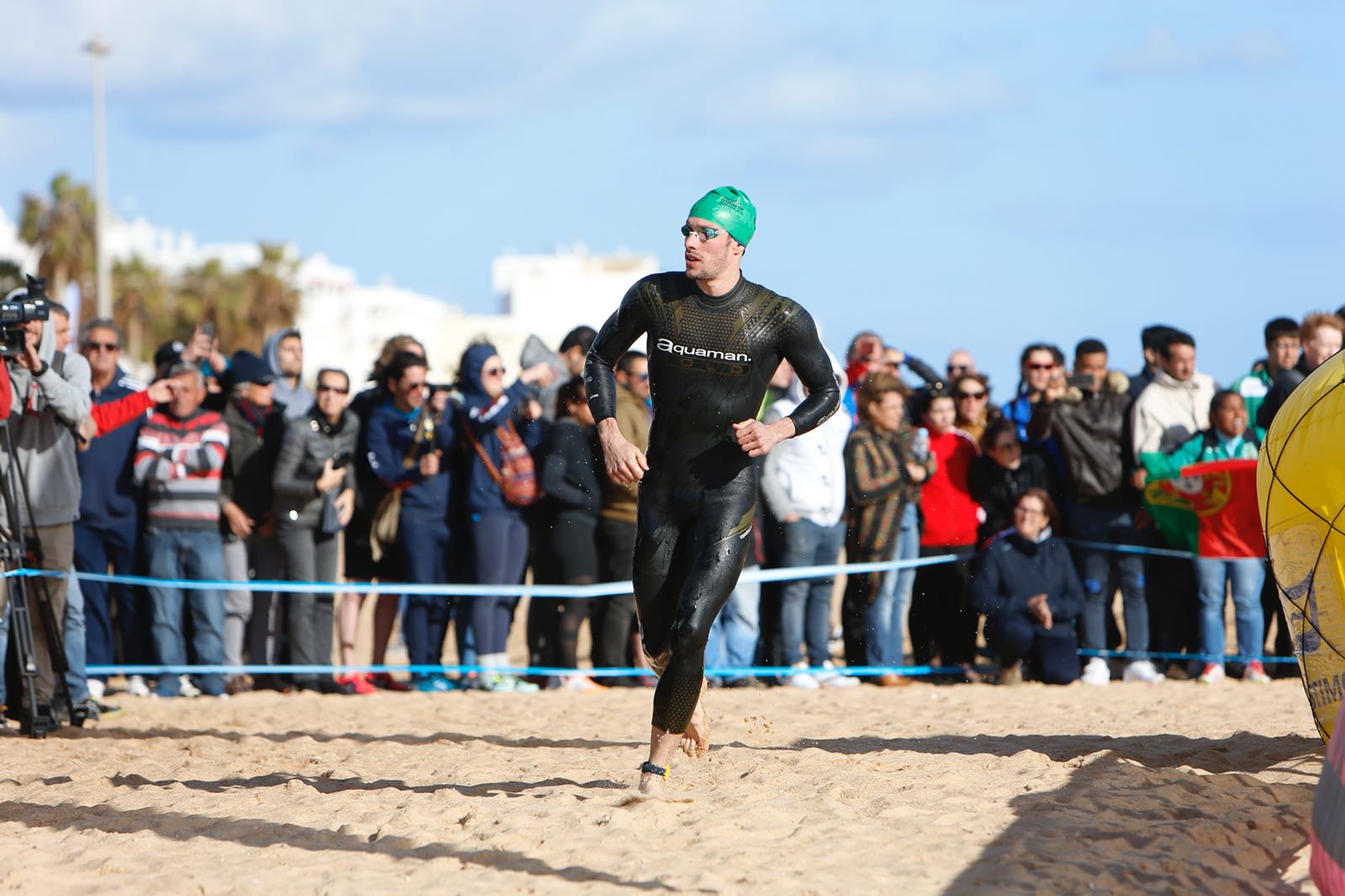 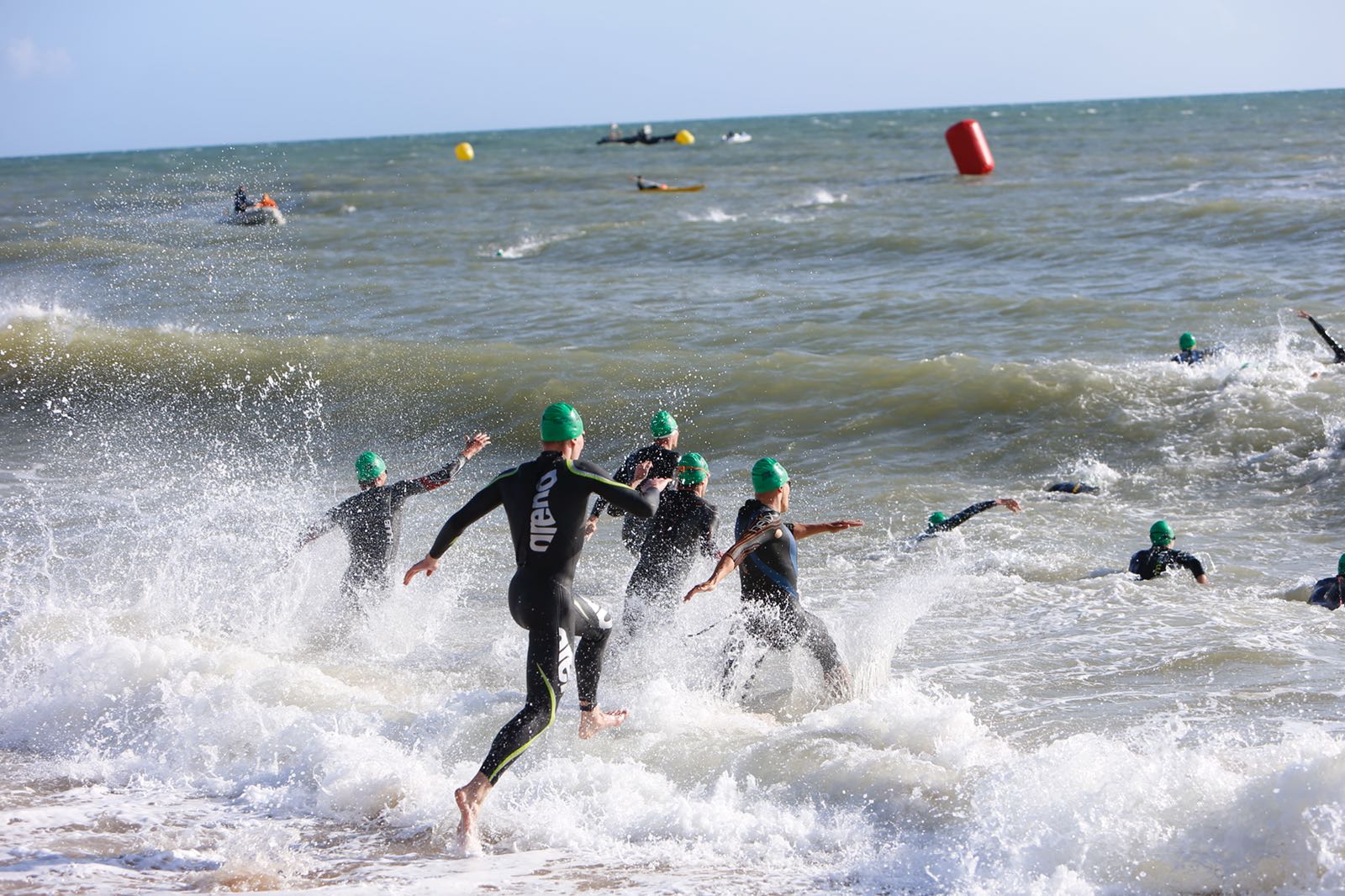 2nd was Kevin Tarek Viñuela ESP and Márk Dévay HUN was close by and then followed a huge group.

Leading out was Coninx, then Viñuela about 5m behind.  David Luis POR and then Dévay took off onto the bike. Uxío Abuín Ares was back in about 6th place but the bike had only just started.

Time to get the pack together and time to get the bike legs working after being tossed around in the Atlantic for some 20 minutes. 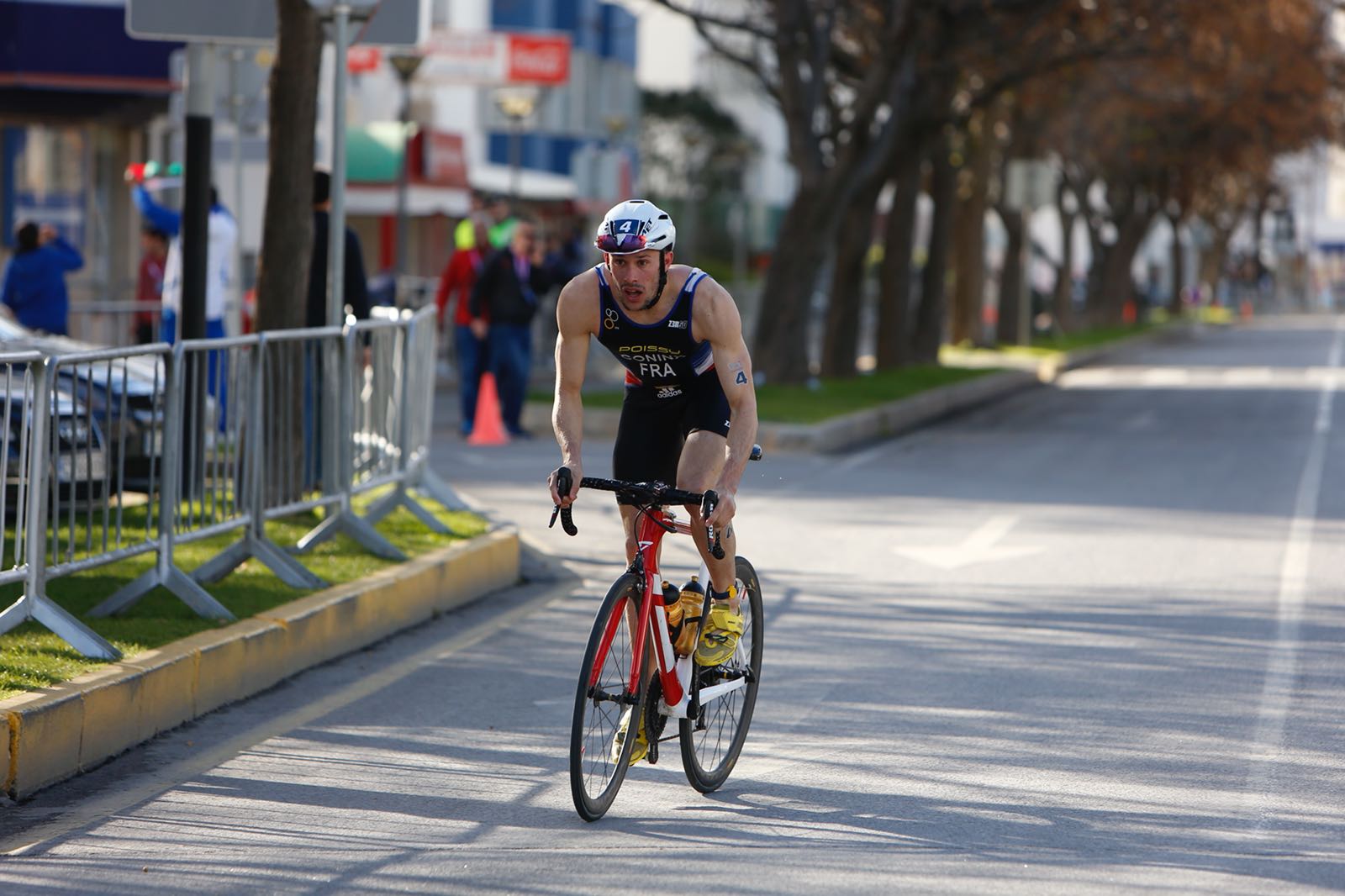 Coninx showed no signs of wanting company in the initial stages of the bike but behind him Abuín was riding like a man possessed. His second place here last year behind a Frenchman will be even more incentive to get gold but he was now well out of contact with that leading group and it was Viñuela who was there instead. 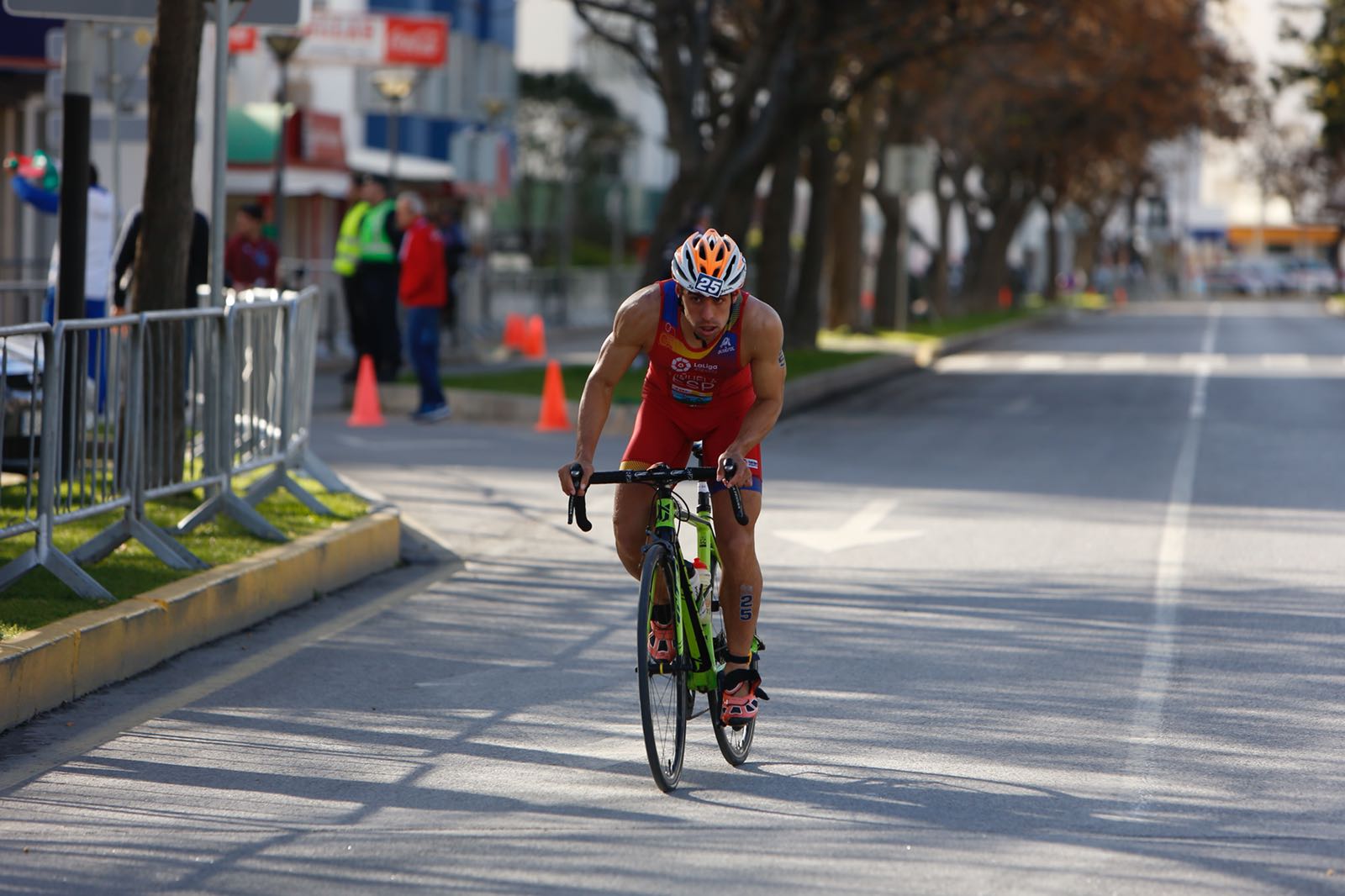 Behind Coninx the groups of athletes were sorting themselves out and amongst them were some very strong cyclists. Coninx held the lead to the top of the hill and then had a chance to see how far ahead he was on the long descent.

Six athletes followed him. Dévay was there as was Léo Bergère FRA  and it was on the flat section that they spotted the Frenchman in the lead and began to haul in him.

Looking back over his shoulder, Coninx realised that the sensible thing was to let them join him and then to try and get a game plan and work hard to escape the large chase pack further back.

The young Spanish athlete, Alberto Serrat Seoane was there. His performances recently have shown that once more the Spanish Federation had found a great talent and along with Viñuela, the Spanish supporters really had something to cheer about.

Dévay looked easy in the pack and with the Belgian athlete, Christophe de Keyser and from Norway, Casper Stornes.

Their hard riding had taken them some 45 seconds away from the peloton.

Stornes made sure that they had to keep working by testing the front of the pack and making them all work hard. 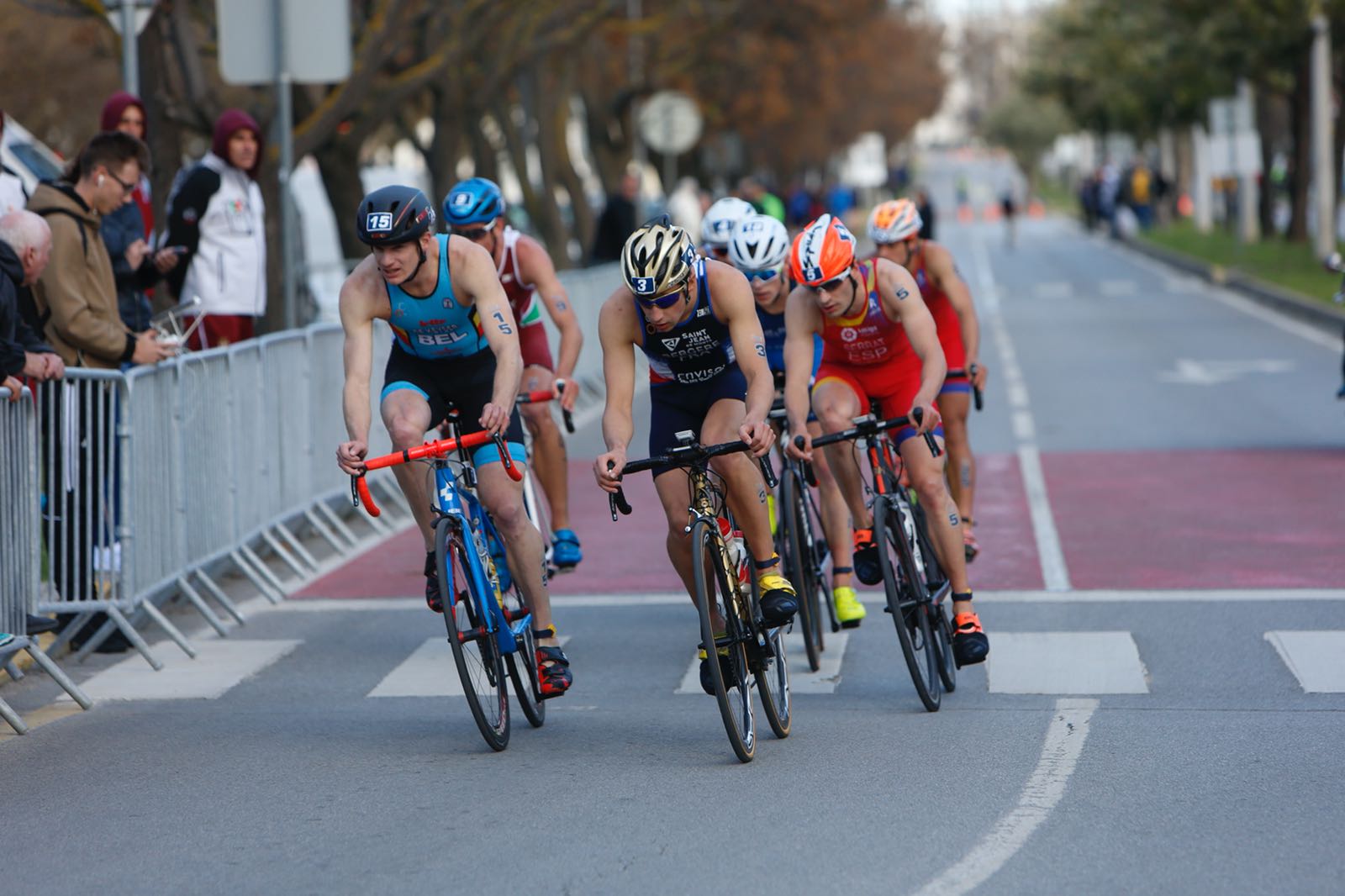 The leading group were working well. Commands were being shouted, positions changed like a well-oiled machine and they simply ate up the kilometres on this testing and exciting Quarteira course.

Stornes showed no signs of easing up and he constantly made attacks off the front of the pack to pull the others along.

De Keyser too took his turn at the front, working hard as did Dévay, Serrat and Viñuela. It was clear that the French athletes had read the pack well and their turns at the front were significant but brief. They were saving their legs for the all-out 10k that was to come.

As the chase group began their climb, the leaders were just beginning their descent and with a clear view of just how far ahead they were, they could calculate just how much work was needed to keep ahead and make the medal selection something for the leading group of 7.

The two Frenchmen, two Spaniards and the Belgian / Hungarian / Norwegian machine rolled on. Their lead was holding and now they were working harder at the front to chain-gang the second half of the bike section.

Their hard work was paying off as they could see when they came to the bottom of the hill and the right hand turn. Their lead was growing. Click here for the video of the turn.

The bell sounded the final lap. The lead had been held. Now it was essential that this group of 7 focussed on their riding to avoid any mistakes. It was going to be as thrilling as the women’s race and down to the final 10k.

As the leading group began their last attack of the hill the clock showed 01:13:27. The climb to the top took 1:20 and then they were on the descent.

The chasing group triggered the split at 01:15:23. This would be a comfortable time advantage for the French athletes. Dévay is able to run a 33 minute 10k. This is a time that Bergère can beat. Coninx, silver medal winner in Rotterdam at the Worlds last year managed 31:31 and so it would be a very important T2.

They came in together. They left pretty much together but Coninx and Serrat led on the early stages with Bergère and de Keyser behind. Dévay lost a fraction of a second in transition and saw the others pulling away ahead of him. Viñuela was somehow holding on and having the race of his life.

The chasing athletes swept into T2, with the massed crowds shouting and cheering them on.

Serrat took the lead as they neared the first of the dead turns. Coninx was happy to watch him from a pace back and Stornes was just behind Bergère. de Keyser lost touch as they headed back onto the seafront and into the headwind. 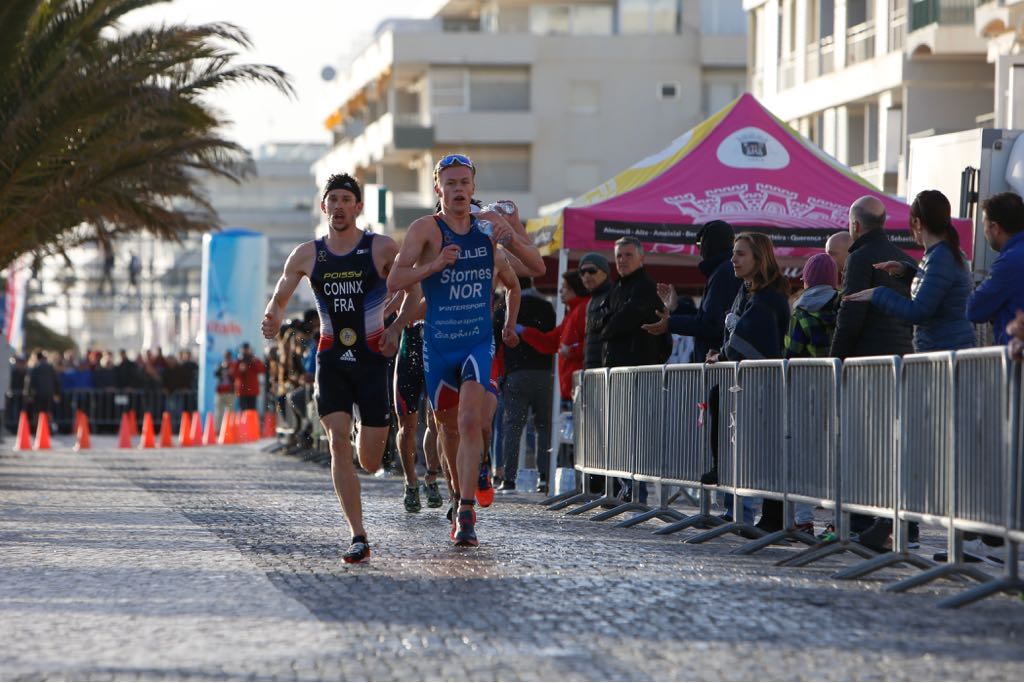 Stornes was happy to lead. Norwegian fans around the world were surely cheering along their athlete. Coninx looked so dangerous on his shoulder. Serrat was once again showing great form and Bergère, at the back, was being pulled along by the pace and looked quite fresh. 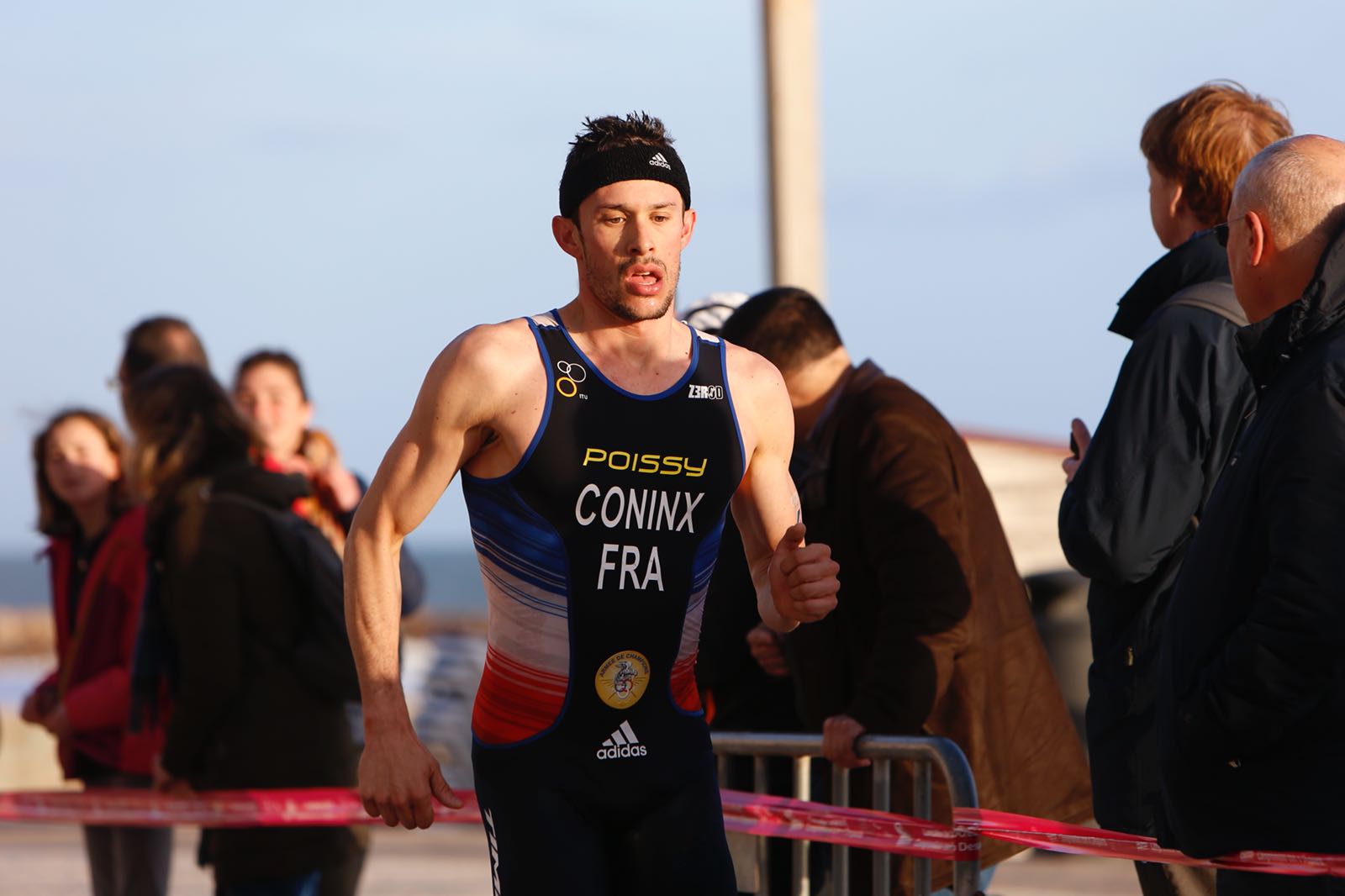 Coninx kicked and created a significant gap half way down the second lap. He chose the right time as they neared the small incline and there was no response from the others.

Back onto the seafront and Coninx was working hard to keep his advantage. Behind him, Stornes was leading Bergère and Serrat had dropped off the pace. So, medals for France and Norway but who would get what?

Coninx looked relaxed. His lead was growing and he was on paper the fastest runner. Bergère looked menacing, sat on the Norwegian athlete’s shoulder and was content to take the shelter provided by Stornes.

Just before the start of the 3rd lap he edged forwards and grabbed a bottle of water from the drinks station to hand it to Stornes. Pace for pace the two continued as Coninx disappeared into the distance.

As Coninx turned for the penultimate time onto the seafront, he had a 22 second lead over the silver and bronze medal athletes. Just who would take 2nd and 3rd was yet to be decided and there was a long, straight and windy section to the finish where the battle would be fought.

Stornes was first onto the final section and Bergère soon came up to his shoulder as, once again, they matched each other’s pace. 2.5k to go.

On the slight incline, where Coninx had kicked, Bergère pushed the pace … just a little but it was noticeable.

Coninx was sorted. His lead was more than enough to give him a moment to ease up the pace and enjoy the moment.

The crowds were getting ready. The Race Commentary Team were getting the crowds together and the Frenchman allowed himself a smile. Click the finish picture to see the video of the finish. 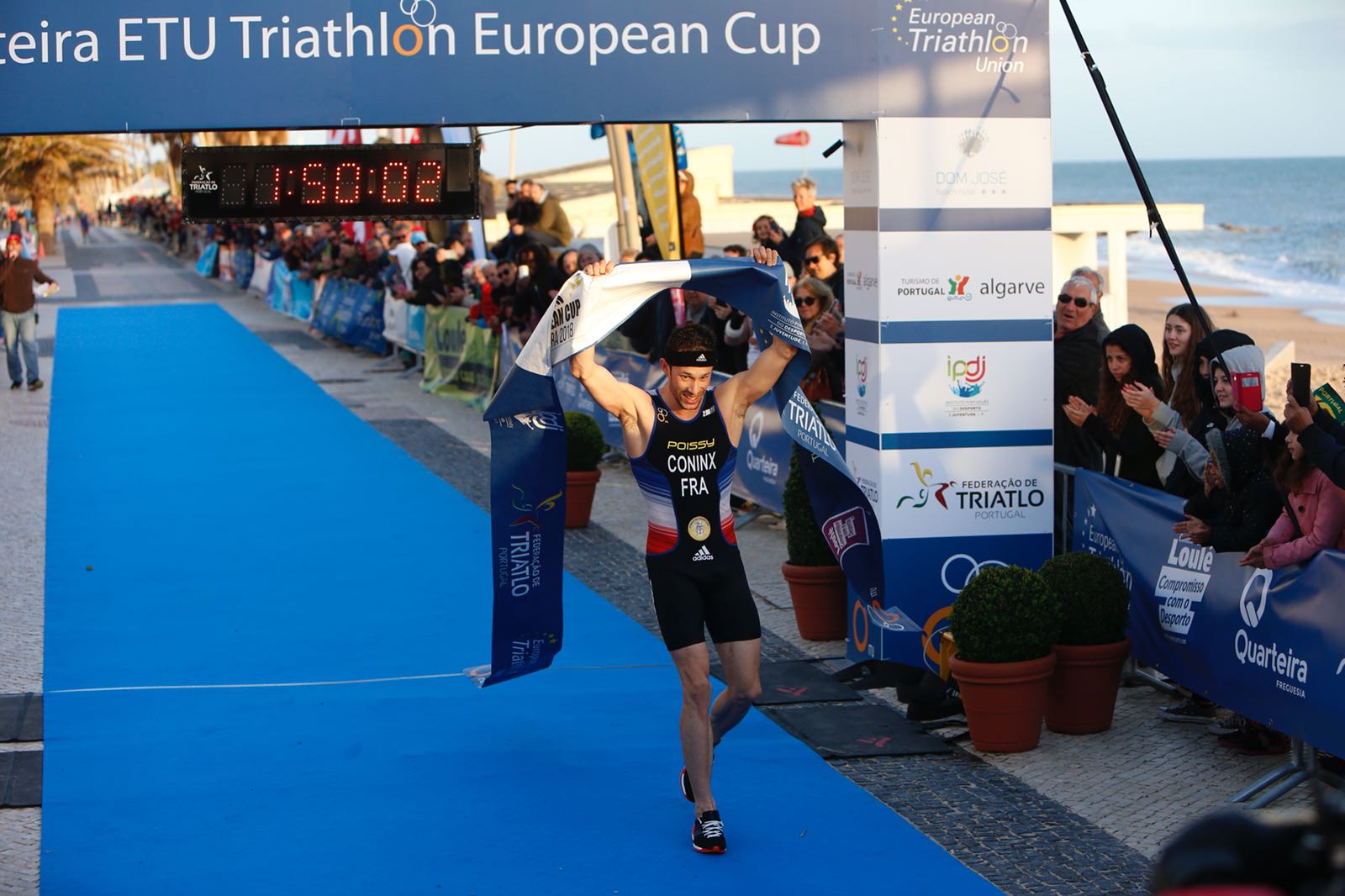 Shaking the hands of the crowds as he neared the blue carpet he looked back to see who would take silver.

It was Bergère, who had timed his kick well and his 20m advantage over the young Norwegian athletes was enough to make it a French gold and silver but what a great result for Norway. 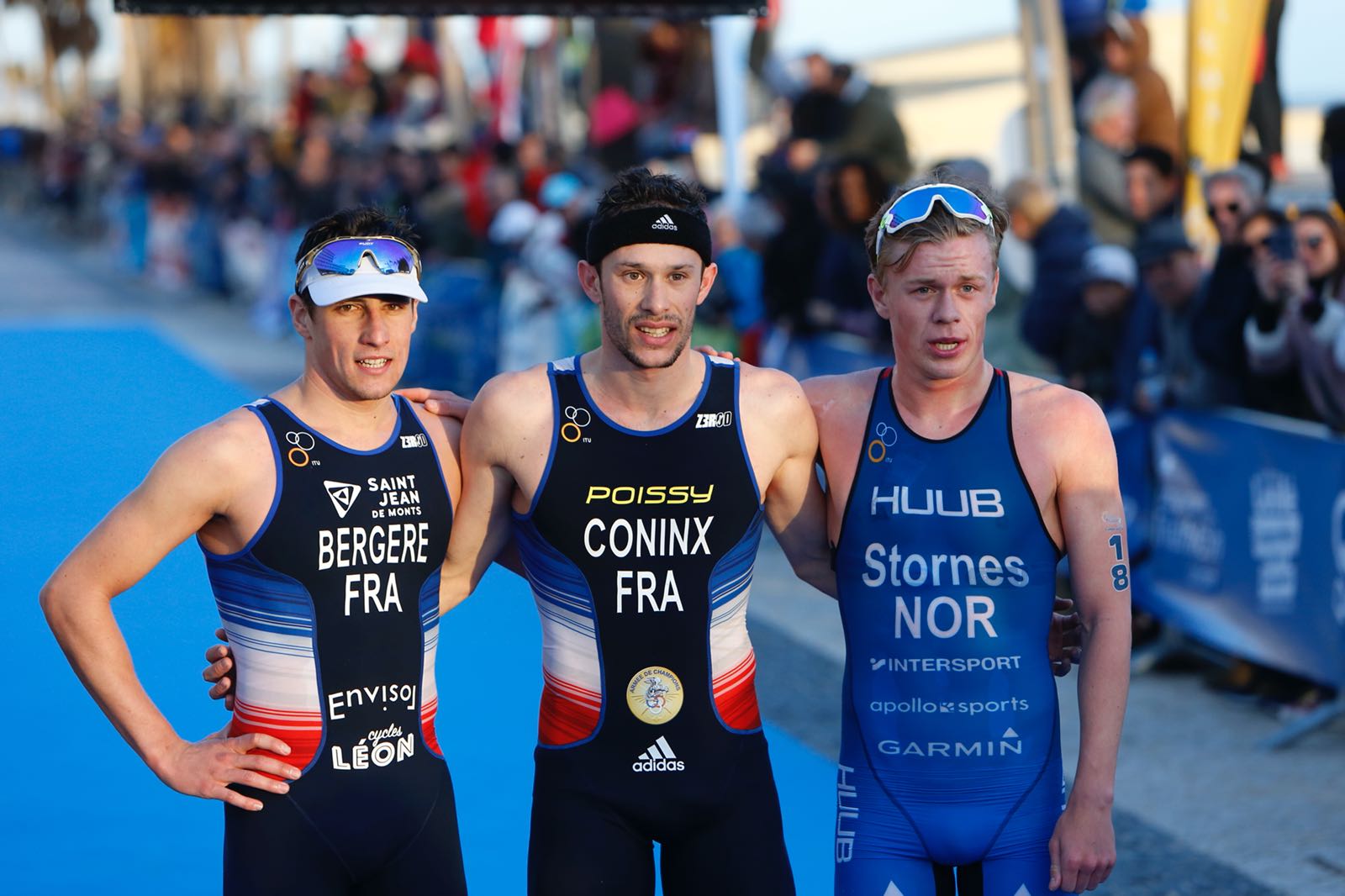 The three athletes had created a massive lead over Serrat who has secured, once again, a top ten finish and valuable points for the ETU Rankings Series.

Viñuela came home in 5th to record his best result as an Elite athlete.

ETU Media would like to thank Filipe Pereira and ETU Executive Board member, Martin Breedijk for their photos and videos during the race and Movielight for the great live feed. 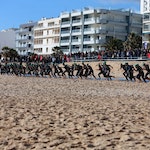 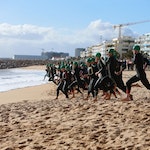 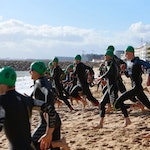 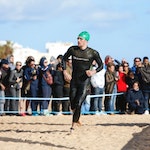 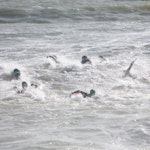 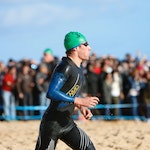 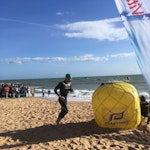 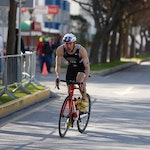 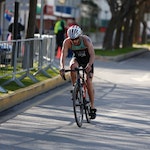 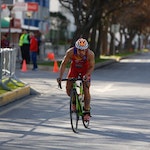 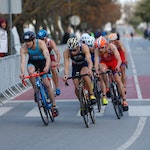 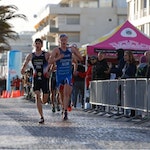