Amazing days of racing in Bilbao Bizkaia and La Baule!

The Bilbao Bizkaia Multisport Triathlon European Championship came to an end after 10 days of racing and partying in an amazing territory that vibrated with the sport.

The Middle Distance and Aquabike Triathlon Award Ceremony and the Closing Ceremony put the finishing touches in the Arenal kiosk which was packed with athletes, companions and the general public who all attended the end of a European Multisport Championships. This all highlighted the essence of our sport: companionship, sacrifice and passion.

The Age Group athletes, the motor of triathlon, lived their well-deserved moment of glory as they climbed on the podium in front of the crowd. The Green Sport Flag, in recognition of a sustainable event, was flown at this final ceremony. Then it was the turn of the paratriathletes, who were recognized by the public for their efforts, rewarding them with the biggest ovation. 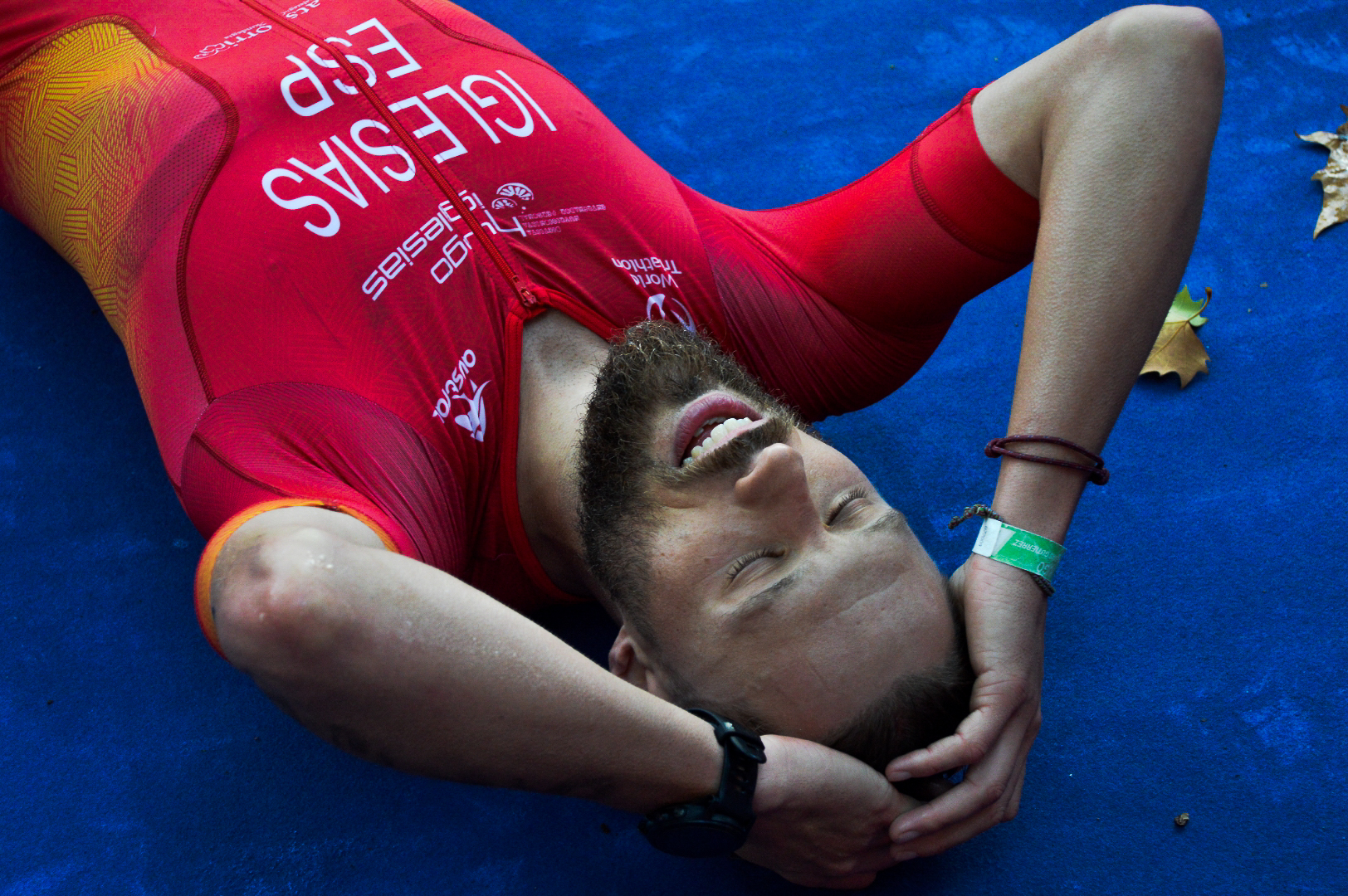 Renato Bertrandi, President of Europe Triathlon said: “It is over…the second Edition of the European Multisport Championships. It has been a fantastic 10 days and our Athletes have had the opportunity not only to race and challenge themselves with the best Athletes in Europe, but also to enjoy the food and the tourist attractions of Bizkaia. 3.000 Athletes have competed on all our Multisport disciplines and I want to use this occasion to formally thank the Region of Bizkaia, the city of Bilbao and the organising committee for all the work that has been done to make this happen. This event will remain for a long time in my memories. A special thank you to all NFs present and all the Athletes that have been competing. A special mention to the ones who competed in multiple events across these days of racing, you are legends that reached an astonishing achievement”.

After multiple different European Championships across different disciplines, thousands of Age Group athletes from nations all across Europe competed and won medals for their nations. We finish off the year with the Age Group Nations League medal table as follows: 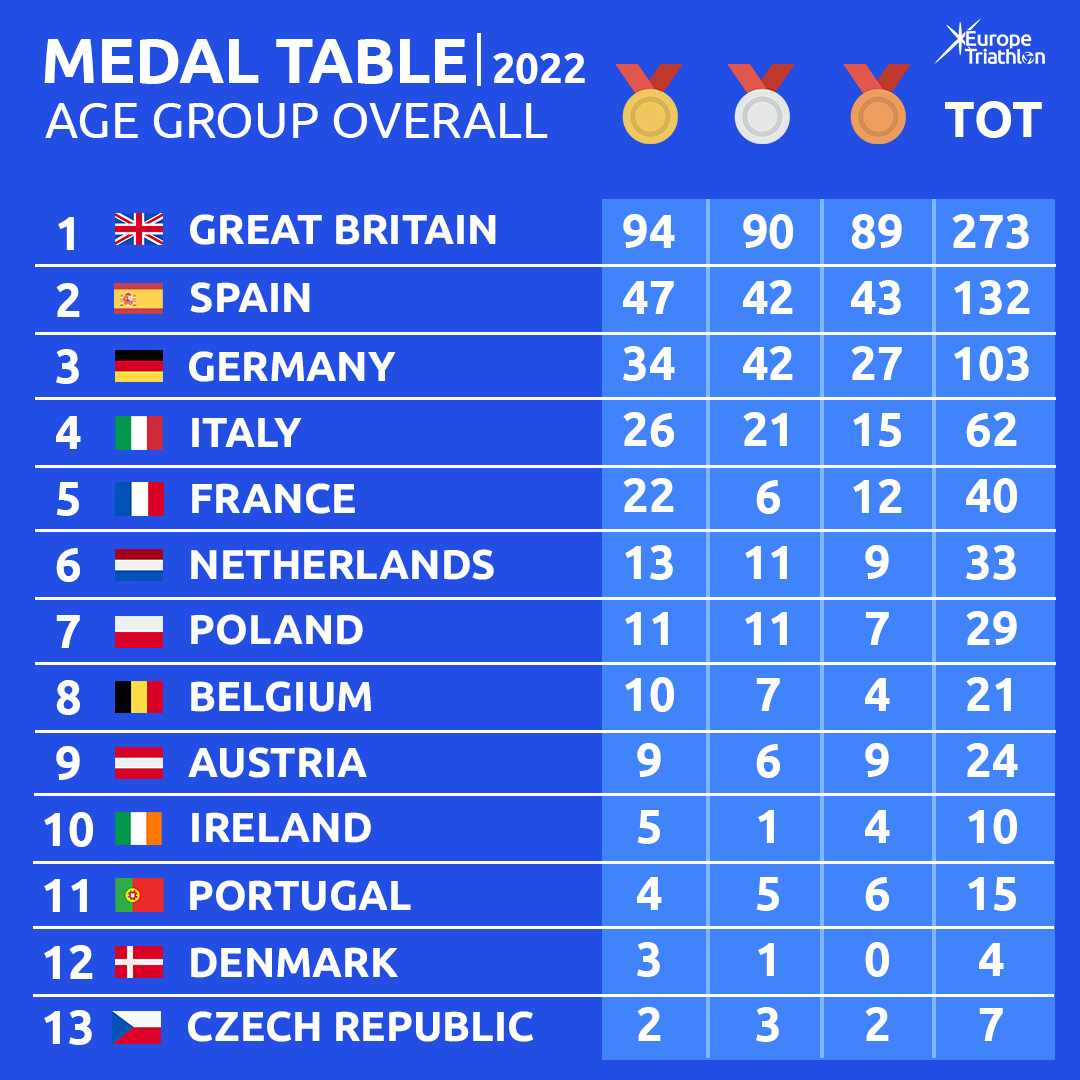 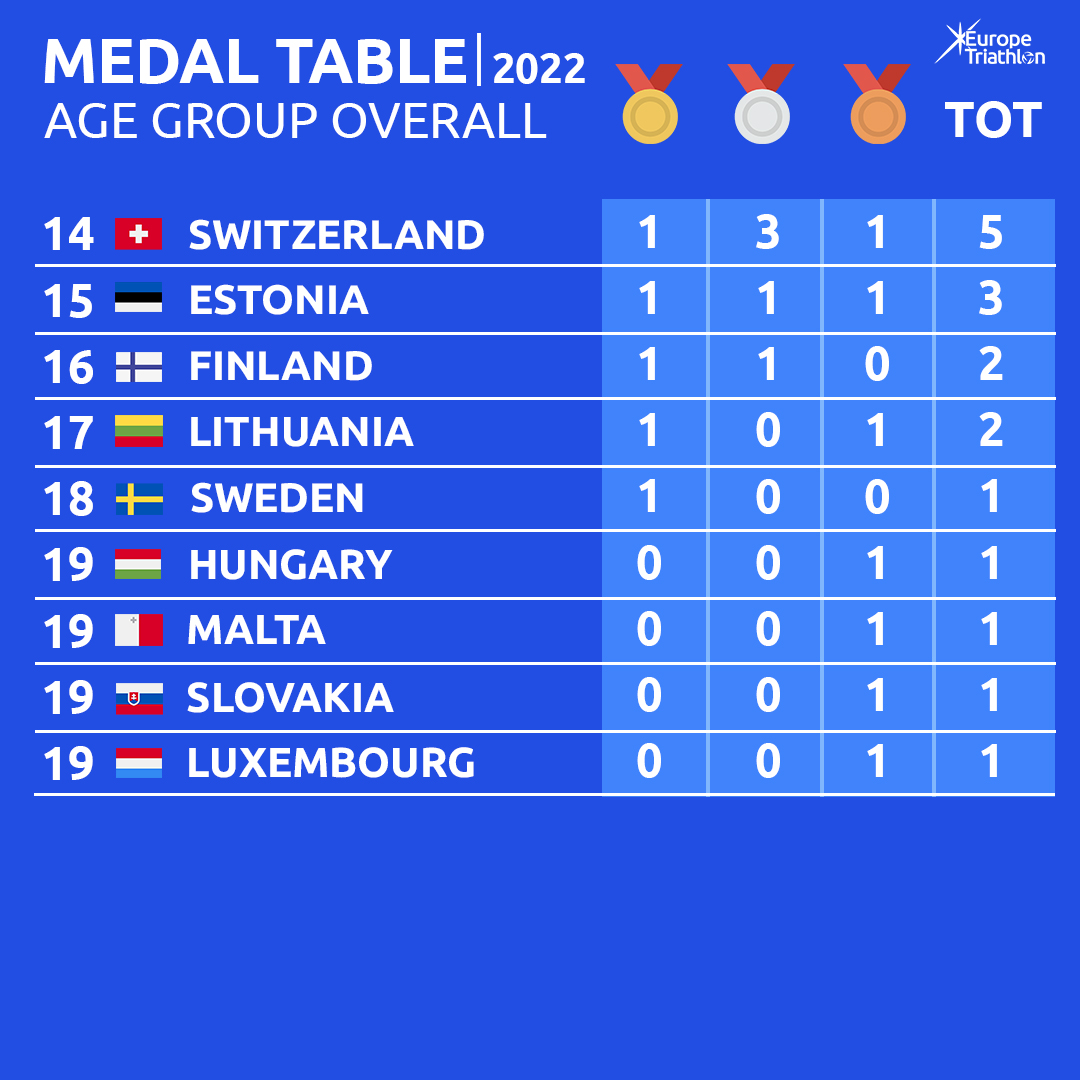 Congratulations to every single Age Group athlete who competed this year, we are extremely proud to be able to organize races for you! Triathlon is for everyone…and you truly represent this spirit.

The Spanish team added three medals to their tally in the Medium Distance Triathlon, the big test of these Bilbao Bizkaia Multisport Triathlon European Championships. The race symbolized the closure, after ten days of sporting celebrations, and the completion of a unique experience, of gastronomy, leisure and tourism with which the 8,000 arrivals from 31 countries have enjoyed.

In the women’s race, the Bilbao triathlete Helene Alberdi dominated the event from start to finish. She came out of the water first, after swimming the 1,900 meters along the majestic Bilbao estuary, with the Portuguese Rocha close behind her, and very close, the other two Spaniards, Judith Corachán and Laura Gómez.

Alberdi began to distance herself from her rivals thanks to her good running race. Racing at home gave her a push to go a little harder through the streets of her hometown and add another gold to complete the her best possible international debut. Behind, Judith Corachán earned a well-deserved silver arriving the finish line 1:08min behind the champion and ahead of the Portuguese Rocha who arrived 5:23min behind the winner, to complete the podium in the Women’s Elite race.

In the men’s race, The Spanish Antonio Benito went from less to more in a test where he ended up being crowned winner, thanks to his spectacular run leg. De Keyser was the fastest in the first segment, the swim, but came out close to the German Bogen. Right behind, the Castilian triathlete who left the estuary just six seconds behind.

In the last section of the race everything changed and as Benito had already warned in the official press conference, the foot race was his forte and he showed it. The Castilian-La Mancha man hunted down the German and passed him to position himself first in the race, gradually opening a gap until he had enough time to enjoy winning a historic gold. De Keyser and Bogen completed the podium, arriving 4:47min and 5:42min respectively from the Spaniard. The Aquathlon races close to the Bizkaia Bridge were also an amazing spectacle for the Multisport races. Many athletes competed, starting on the other side of the finish line, just across the river, swimming to put on their shoes and start the run to get to the finish.

The elite women’s race was won by Spanish athlete x who with an impressive run got to the finish line in first position, just ahead of x and y. X was also crowned U23 champion. The men’s race saw Nicolo Ragazzo from Italy come out of the water first. The run was the decider for the race, with Chris Perham catching up with the leaders and taking the win in a sprint finish. Spanish athlete z came second and the swim leader, Ragazzo, in third. The Italian was also crowned U23 Aquathlon champion. The age groups also presented themselves, swarming the race course and winning medals for their country.

The two towns, linked by the emblematic Bizkaia Bridge, witnessed a great sports, gastronomic, cultural and leisure environment for a unique day that athletes, companions and visitors could enjoy. Portugalete gave its visitors the Txakoli Fest, the Exhibition on the Camino de Santiago and the guided tour of its streets, all within its 700th anniversary. The Mercedes festivities in Getxo, a performance by the Ondarreta Abesbatza Choir and the concerts by Eley, Keep Calm and Guda Dantza, completed an endless number of activities related to sports to the delight of the public. 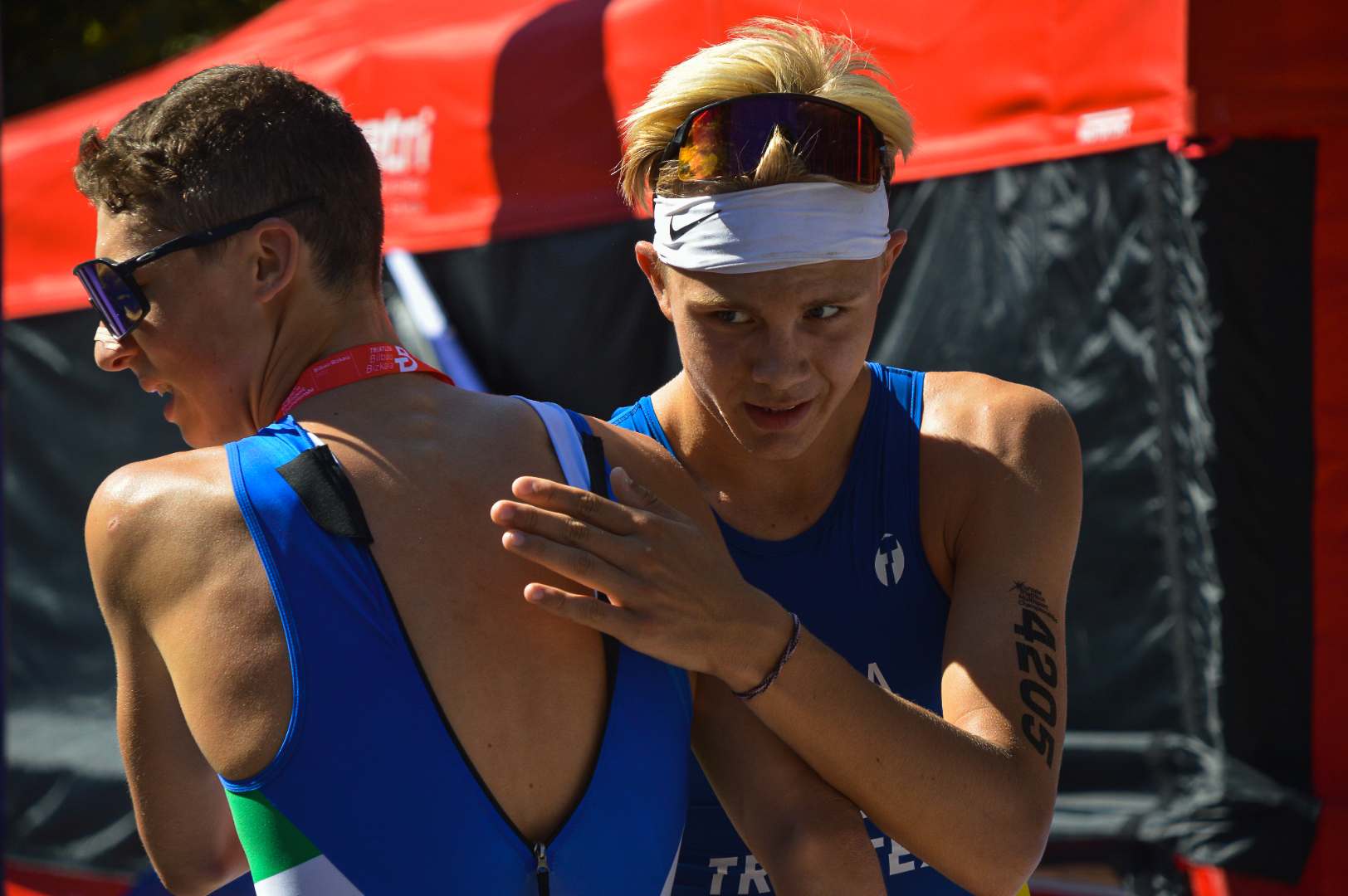 It was another historic day for team Spain in the Triathlon Cross, another test that was part of the Bilbao Bizkaia Multisport Triathlon European Championship.

The triathlete born in Valencia, raised in Malaga and who now lives in Euskadi, added a new victory to complete an unrepeatable record. This European gold joins the five world titles – among many other awards – that contemplate an athlete who continues to provide glorious afternoons at almost 40 years of age, demonstrating that sport does not understand age. Despite coming out of the water in eighth place and more than a minute behind the first, Ruzafa imposed his class in the cycling segment to overtake all his rivals and maintained first place until he crossed the finish line to the applause of the crowd in Bermeo. Second was Kevin Tarek Viñuela, multiple champion of Spain and the world champion at the World Beach Games, he was also the fastest in the swim. The Leonese saw how Ruzafa cut the advantage of 1:16min before starting the bike and tried to follow in the footsteps of the legend. He dealt well with the run to arrive second at the finish line in the first of the two tests that he completed at this European Championship (the Aquathlon was the second). Third finished Pello Osoro getting even faster from the previous day in the Cross Duathlon and demonstrating his versatility as a great triathlete. He went from less to more and ended up beating his rivals to win a well-deserved bronze. Mairhofer from Italy was the champion in the Women’s Elite with a commanding performance overall, second was the U23 champion Bicanova who had the best of Marta Borbón who took the bronze, just 9 seconds from silver.

In the Elite race, the circuit, technical and quite hard, proved too hard for a lot of athletes and they saw how the Belgian Carabin took gold, together on the podium with the Italian Saravalle and the Belgian Odeyn. In the elite women’s race, the victory went to the German Anna-Lena Theisen who finished ahead of the French Morgane Riou and the Dutch Noor Dekker, silver and bronze respectively.

Balmaseda not only offered a show on its sports circuit, it also did so on its streets. The town square hosted the local market of typical products so that athletes and companions could take home a souvenir of their visit to an iconic place in the enclave of the Enkarterri region. Immediately afterwards, some putxeras of beans with sacraments were prepared so that the competitors could replenish their strength. With the night well underway, the Eguzki Dantza Taldea traditional dance group completed the unique experience.

The race course was centered around the city of Bilbao and the finish line was located right next to the Arenal expo area. Many athletes gathered to compete in the Duathlon races and later those who medalled, were awarded their medals on an amazing stage with supporters watching and cheering.

The women’s Elite race was won by the Italian Giorgia Priarone, accompanied by the French Legrand and the Belgian Ricour. The competition was decided on the last 2.5km run, as the front group all came off the bike together. In the Elite men’s race, the Frenchman Maxime Hueber-Moosbrugger confirmed his Duathlon capabilities by taking the win. He was followed by fellow countryman Benjamin Choquert and the Belgian athlete Arnaud Dely. 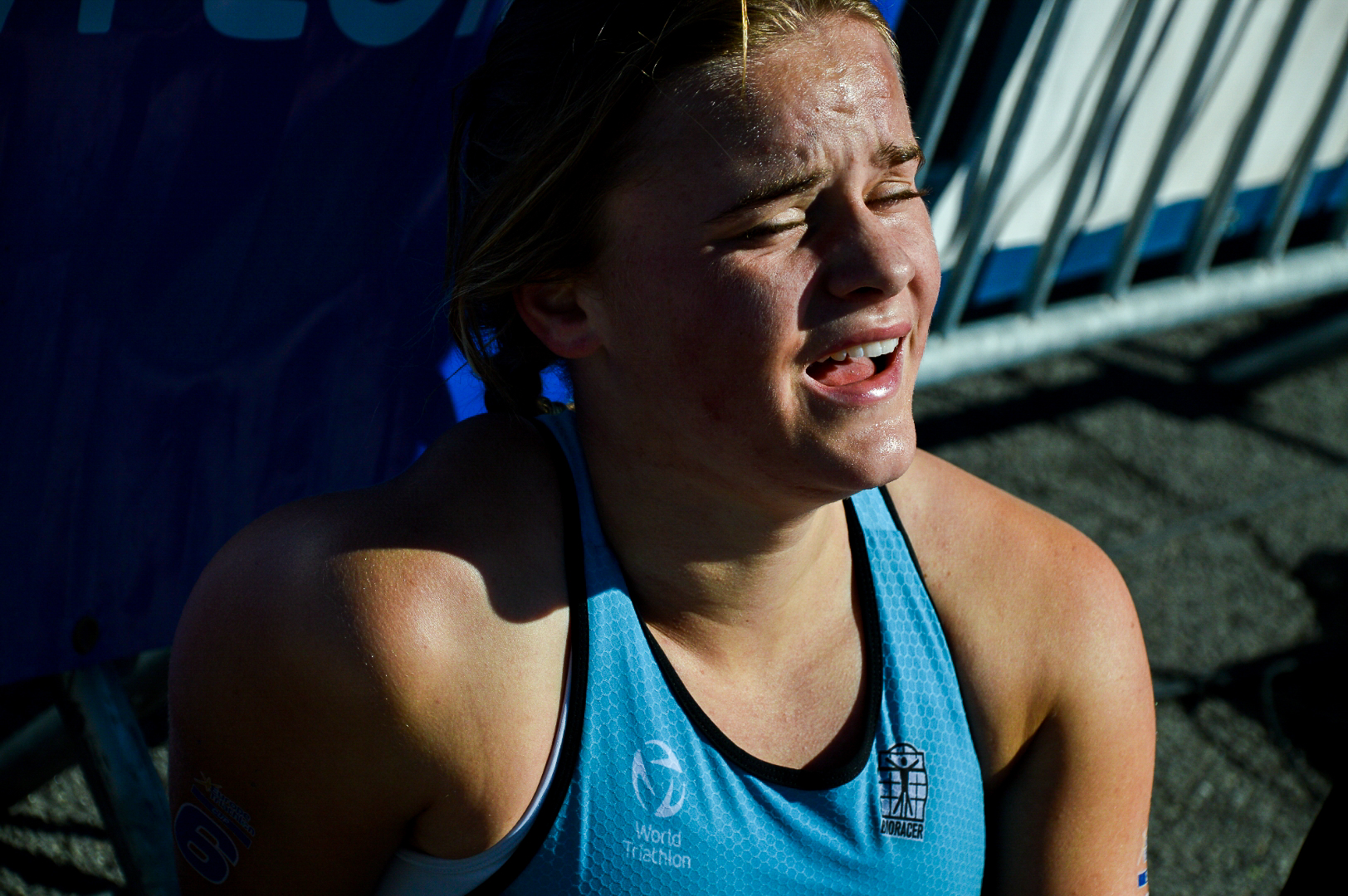 Just before the Multisport Championships in Bilbao Bizkaia, we witnessed some incredible 3 days of racing in the north west of France, in La Baule. The atmosphere was incredible and we were lucky enough to witness some out of the ordinary weather conditions which meant sunny days and warm temperatures for all the races!

The races were structured with semifinals and finals to then crown the Youth European Championships. The top 30 athletes qualified for the final, from 3 different semi finals both for the men and women, and got the chance to battle it out for the title. Throughout all semis, French athletes dominated the top spots of the competition and safely qualified for the finals. 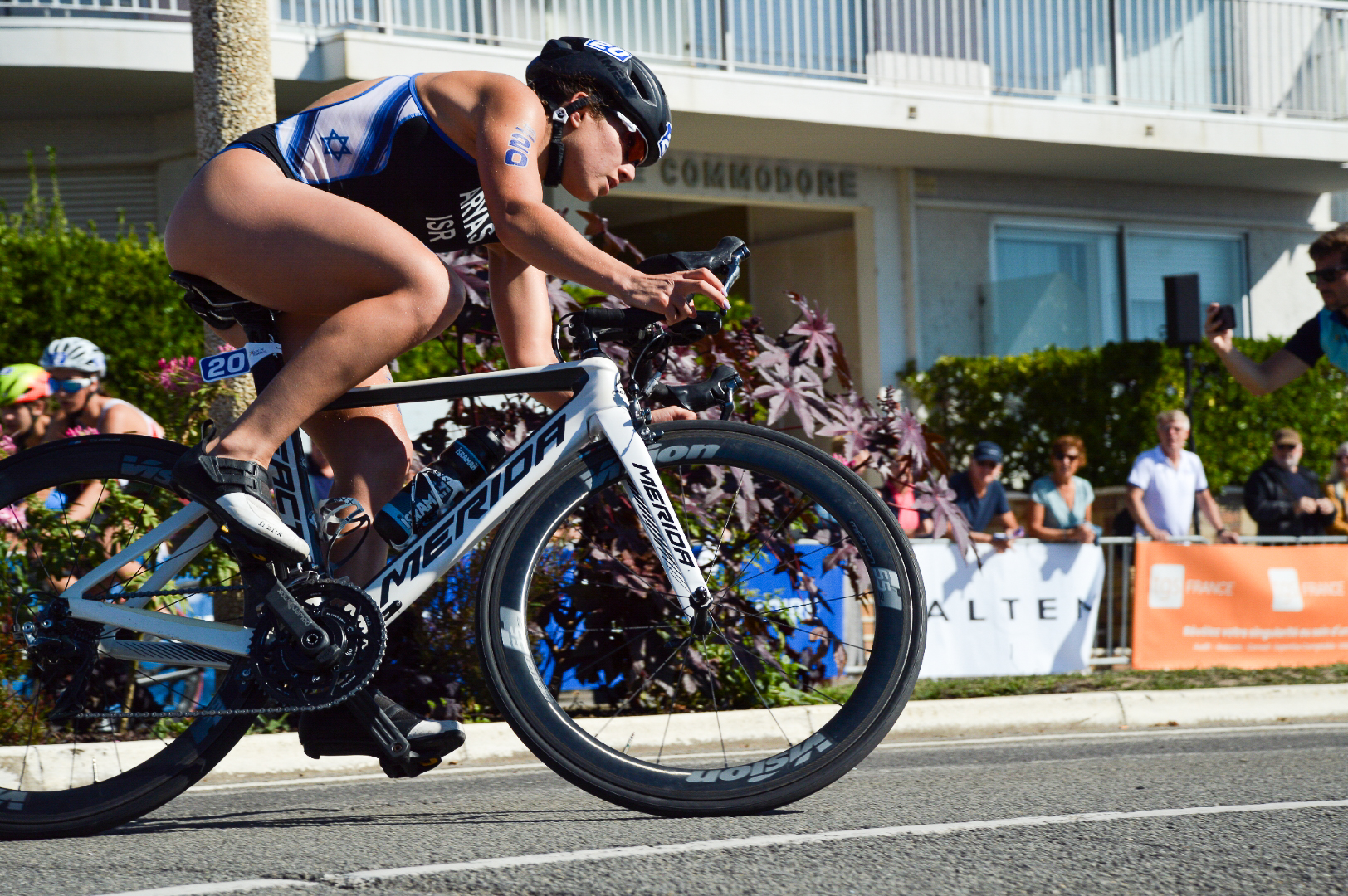 On Saturday the finals were held on the same racecourse as the day before. The athletes were ready to take their chance at becoming the best in Europe. The women’s race saw a big group come out of the water and form on the bike, which then meant that the race would be decided on the run. As they got off the bike, the top runners immediately made their way to the front and battled it out until the last kilometer. The French athlete Léa Houart took the win, with Lauren Mitchell from Great Britain coming in second and fellow teammate Millie Breese coming in third. The men’s race followed a similar pattern, except for the fact that on the bike a French athlete broke away and tried to make it stick on the run. Tristan Douche from France put in a commanding run and finished just in front of Hector Tolsa García from Spain and Brandon Pye from Great Britain. 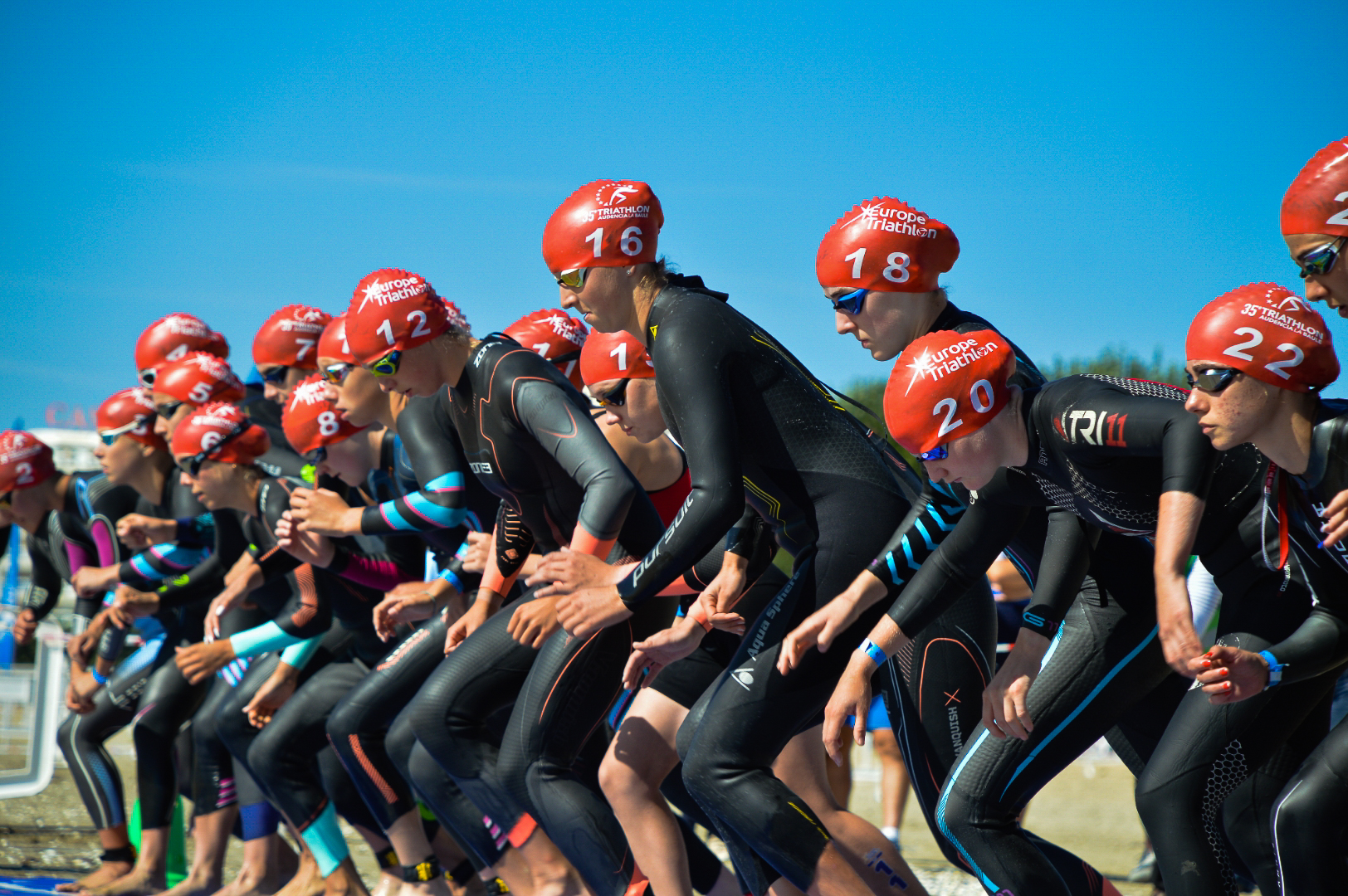 Sunday was the day for the Mixed Team Relay which saw 29 teams from across Europe compete. To include as many athletes as possible and make sure everyone got the chance to race, 5 of the 29 teams were called Team Europe and were composed of a mix of athletes from different nationalities. Teams like Austria, Italy, Spain, Great Britain and France all battled it out for the top positions. Ultimately the home nation of France used the crowd support to push through and take the win. Great Britain came second and team Spain in third. It was an incredible few days of racing, it was great to see the next stars of our sport out there competing and battling out whilst having fun and making new friends from across the continent! We hope to see you all back next year.