On Friday May 29th ETU organised a zoom call with the National Federations (NFs) with the biggest Age Group community and the 3 NFs organising a European Championship event. In total 15 NFs took part and  the meeting was led by ETU President Renato Bertrandi and ETU Board member and race commission chair, Herwig Grabner. The primary goal of the meeting was to find out the possibility and willingness of the Age Group Community to race European Championships later this year. 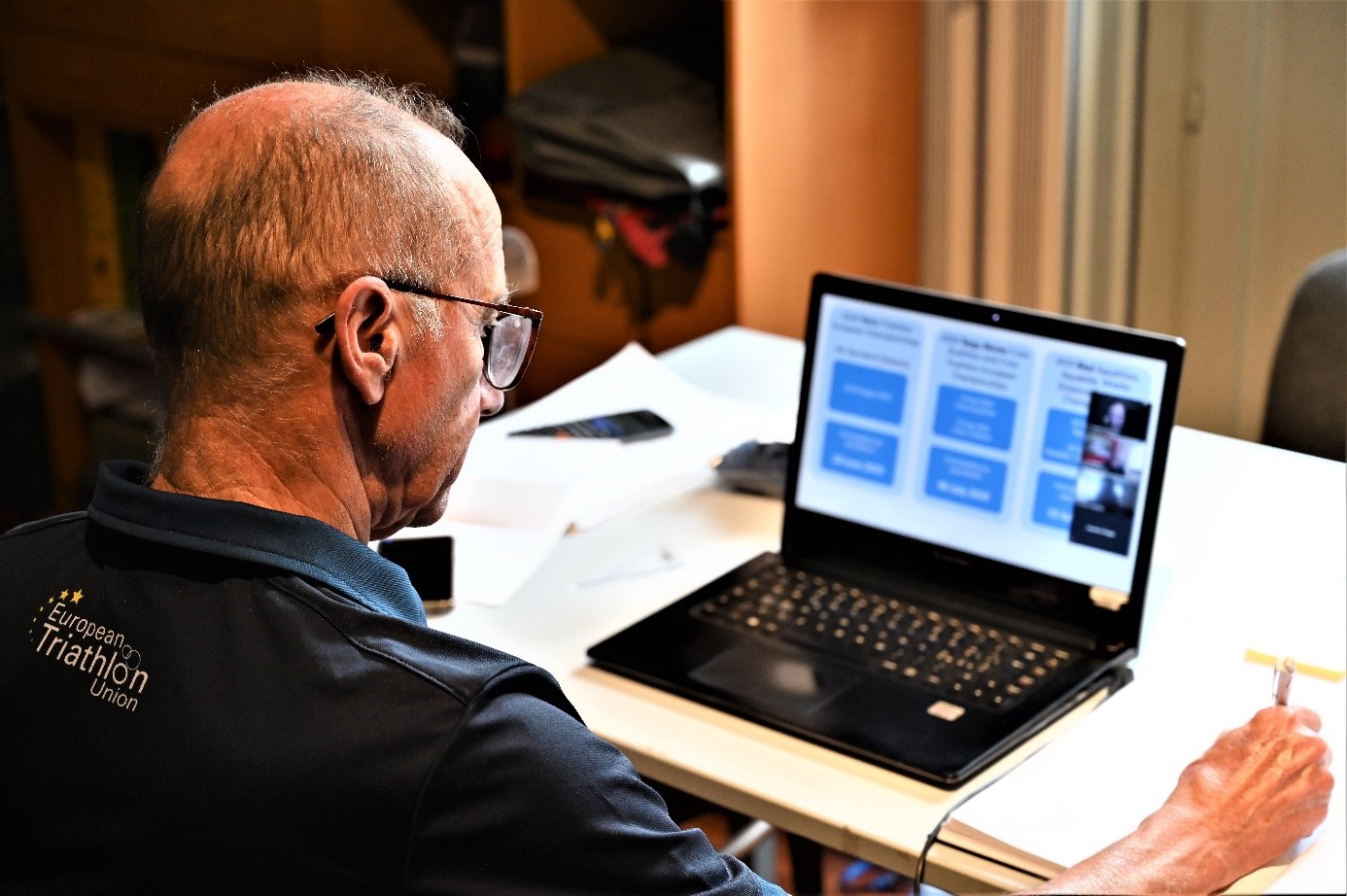 At Renato Bertrandi’s introduction he expressed the importance of keeping the triathlon family together and in order to be able to do so in a transparent way, working as a group or team was of paramount importance.

It is very difficult to make any predictions regarding the future; however, it seems that the situation is improving in all countries, but not at the same speed. A vaccine cannot be expected before the end of the year. All athletes are trying to do their utmost to keep themselves fit considering the situation.

In order to cope with the difficult situation ETU started mid-March with a weekly “virtual” Executive Board meeting. From the very beginning we agreed that our aim was to support all our athletes, no matter the level.

From mid-March till mid-May many discussions took place with the NFs and the Local Organising Committees (LOCs) focussing on our various events. All those involved showed a strong commitment to keep the season alive. On 13th May we released our tentative calendar. Now we have to verify with you the situation in each of your countries and the possibility that your athletes can race at our Age-Group European Championships.

Herwig Grabner explained why ETU has been working on a replacement programme. “First, ETU consider it as their task to use all possibilities to return to competitive sports as quickly and safely as possible. Second, ETU would like to give their athletes training motivation for the season and goals they can train for. Third, ETU also has several very motivated LOCs that support ETU in the implementation of a replacement programme.”

As you all know the 2020 Race Calendar has changed dramatically since mid-March and a new race calendar was presented on 13th May. The first European Championship on the new calendar is Tartu, hosting the Triathlon Standard Distance Championships from 28th – 30th August followed by Târgu Mureș, where the Cross Duathlon and Cross Triathlon Championships will be held on 12th and 15th September and in Bled on 18th and 20th September.

We established a final deadline to (re)confirm or cancel all our events, which is 10 weeks prior to race date. These dates are for Tartu 18th June, Târgu Mureș 6th July and Bled 13th July.
ETU recommends NFs to wait to book any travel until the event cancellation deadline for each event has been reached.

The ETU Board had some questions to you as NF AG team leader:

In general, most NFs are confident in sending athletes but much will depend on the travel restrictions and any quarantine measures that might be imposed for people travelling to and from the race.

ETU will have another call with the race organisers this or next week and will work closely with ITU to have the deadline for the registration for the athletes as late as possible. If there will be changes to our Calendar, it will be communicated as a matter of priority.

ETU also announced that there are some changes regarding the 2021 European Championships races. Triathlon standard and sprint will be again at one location as in the past. The multisport festival of 2020 in Spain will be postponed to 2022 as requested by ITU and due to the postponement of the 2020 Almere Multisport World Championships to 2021. Therefore for 2021 we will have the same as this year with 3 principal Championship Festivals:

Of course, we will also a Winter Triathlon Championships in 2021.

It already has been announced last week that Roth will organise the 2021 ETU Long Distance Triathlon European Championships. There is an agreement with the LOC to have 200 slots additional to the athletes that are already registered. An email has been sent recently to inform the NFs about the slots.

Renato ended the meeting by saying that we are 3 months away from the first race. Hopefully the situation will move in the right direction. He thanked everyone for their time

It is with great regret that we have to announce the cancellation of the…
Saturday in the beautiful venue of Balikesir, it was held  the European Cup in…
Saturday Morning at Odaiba Bay Team GB has written the history of…
more news →