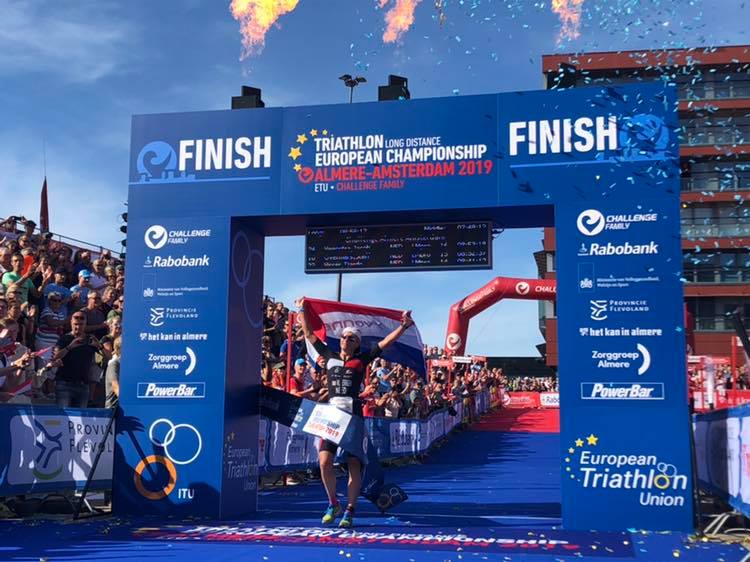 Fairy-tales don’t happen, you just read about them in books. But this afternoon it all came together for the Dutch long-distance Queen. More than any other in the sport in the Netherlands, she has inspired women to sign up for the biggest challenge and for the longest of races. Born in 1978, she has been a frequent visitor to ITU and ETU races, with her first podium coming back in 2004 in the chilly Fredericia Long Distance Duathlon World Championships. She came back in 2006 to claim the title, beating top names in the process. Her last victory on this circuit was here in 2017, claiming the European title but she is much better known on the pro-circuit, where her racing prowess gave her VVIP access to the most elite of elite groups; the sub 9-hour Club.

Van Vlerken set the record books on fire in July, 2008 when she set a then new world record of 8:45:48 for the full distance at the Quelle Challenge Roth. Her finish time was more than five minutes faster than Paula Newby-Fraser’s world record time of 8:50:53. Newby-Fraser’s time had stood for 14 years and it seemed nobody would ever better it. As race day neared and the weather Gods refused to shine, it was clear that the race would be held under awful conditions and, with biting cold, non-stop rain and gusting winds, Yvonne van Vlerken delivered the performance of a lifetime to break that record, posting the second-fastest female Ironman-distance marathon time of 2:54:22. The joy of being the fastest women in the world lasted only a year before, in dry and pretty much perfect conditions and again in Roth GB’s Chrissie Wellington, who lowered it by 13 minutes and 49 seconds. A silver in Kona in 2008 and the dye was set. If you wanted to go long in the Netherlands, Yvonne van Vlerken was your inspiration. Four more sub-9hr finishes in Roth, Almere and Florida consolidated her fame.

Ahead of this year’s ETU Challenge Championships, she had announced that this would be her last pro race and so, with her crossing the finish line, the end of an era would be come. It was not to be an easy journey to the finish and she found herself playing catch-up for most of the race until around the half-way point in the marathon. Spotting arch rival, Sarissa de Vries ahead on the run but noticing her pace was dropping, van Vlerken went into full attack mode and, upping the pace, was soon alongside and then gone.

Taking the title in true, Sub-9hr style, van Vlerken stopped the clock at 8:56:10 and, in a final act of symbolism, threw her shoes into the crowds, to be caught by a cheering fan and cherished.

A final gold, a final title and a final show of pure pace will leave a lasting impression on the world of multisports and will continue to inspire. The last of the sporting awarded honours today perhaps, but more will come no doubt as a nation says thank-you to Yvonne van Vlerken. Lina-Kristin Schink edged ahead of de Vries to split the Dutchwomen on the podium and gave Germany the silver. de Vries and her bronze medal will ensure that the tradition of long distance Dutch racing women can continue.

Sit back and enjoy the full race report, posted by Tim Moria Challenge-Almere 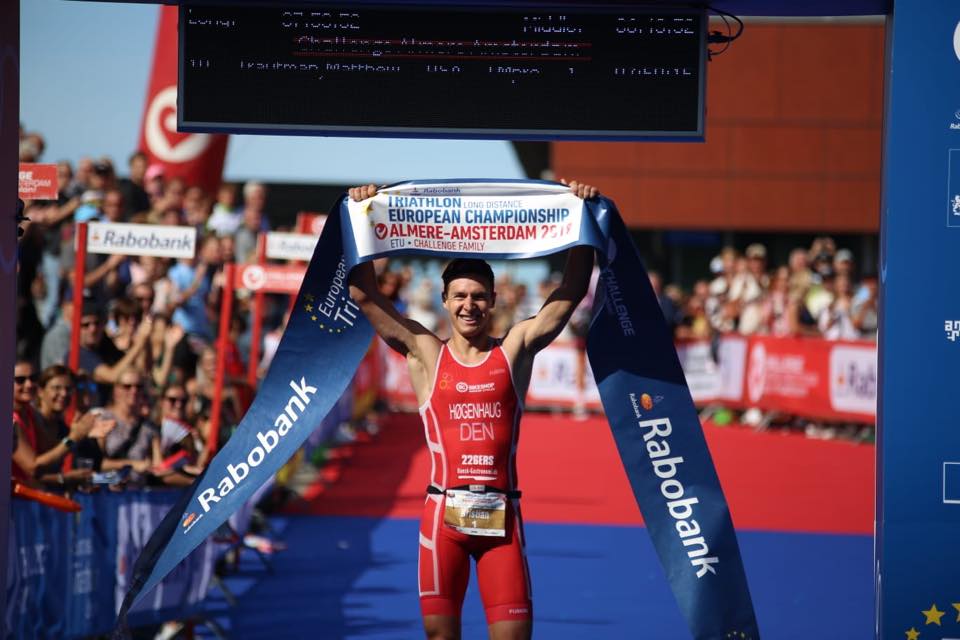 Only magic in Almere! With a race record in the men’s race – South African Matt Trautman set a spectacular time of 7:50:15 – and Yvonne van Vlerken who ended her career with an European title, this year’s edition of CHALLENGEALMERE-AMSTERDAM was an enormous success.

During the swim, the British Kieran Linders dominated very strong and after 46:51 minutes he already climbed out of the water. More than a minute later, it were Georgii Kaurov and Aliaksandr Vasilevich following and another minute after that all the favourites followed.

Most of the favourites found each other quickly on the bike and a leading group of five riders was formed: Thomas Steger, Matt Trautman, Kristian Hogenhaug, Tomas Renc and Sven Strijk. Evert Scheltinga, the Dutch athlete with best chances, was not joining this breakaway after he was forced to stop the race because of two flat tyres. The five leading athletes stayed together for a long time, until Trautman and Hogenhaug increased the pace with about thirty kilometres to go. “I just kept pushing”, Trautman told so after the race. “Keep going to make a difference on the bike.” It was Hogenhaug who told exactly the same after his finish.

The two leaders eventually returned together to the transition zone, but it was Trautman who took the initiative there. With a very fast pace it soon became clear that the South African was on track towards a new race record, which since last year was in hands of Jaroslav Kovacic (7:55:44). With each lap running, Trautman increased his lead on that record. For a long time Hogenhaug was able to follow in just over half a minute, until the last ten kilometres. That’s when Trautman made the real difference, to finally finish in a spectacular time of 7:50:15 hours. “It was an amazing day. My swim was good, my bike was strong strong and the first 21 kilometres of running went smoothly. After that I started suffering the suffering, but I love this victory. This is really nice.”

Finally Kristian Hogenhaug followed in second place, only 3:37 minutes after Trautman and therefore as European Champion. “I have mixed feelings. Somehow it’s a shame that I didn’t win the race, but Matt was just a little bit better. But, the European title makes me very happy: it’s fantastic.” The overall bronze went to the Czech Tomas Renc (+10:29), who took the silver in the European Championship. Morten Brammer Olsen (+11:11) became fourth overall, but third at the European Championships.

At the women’s race, it was initially Sarissa de Vries who opened very strongly. After a very strong swim part, she covered the 3.8 kilometers in 51:29 minutes, she already had a big lead on all competitors. Yvonne van Vlerken, for example, was almost 8 minutes behind at this point. This gap only gets bigger during the bike. This was only because De Vries was very powerful on the bike and that was reflected in her bike time: after 4:38:06 she racked her bike back in the transition zone, which was good for a new bike record in Almere. Van Vlerken came back in second place, more than fifteen minutes behind De Vries. With that the defending champion seemed to be in a beaten position.

During the first 21 kilometres of the running part, it still seemed that way. Van Vlerken did catch up with De Vries, but it didn’t go very fast and De Vries kept running steadily. However, this changed after the half marathon point, when De Vries was unable to keep her nutrition in and she lost a visible pace. “I have had so much pain and I just couldn’t manage to go faster. Especially in the last lap I even thought I wouldn’t make it to the finish”, she said in tears after the race.

In that last lap Van Vlerken had already passed De Vries by the way: that happened with about ten kilometres to go. Her delay of fifteen minutes disappeared like snow in the sun and changed in a big advantage. After 8:56:10 hour Yvonne van Vlerken crowned her farewell race with the victory, European and Dutch title. “This is…I have no words for it”, she stammered immediately after the race. Added in tears: “This is so important. I wanted to end my career so badly in a beautiful way. And it happened now.”