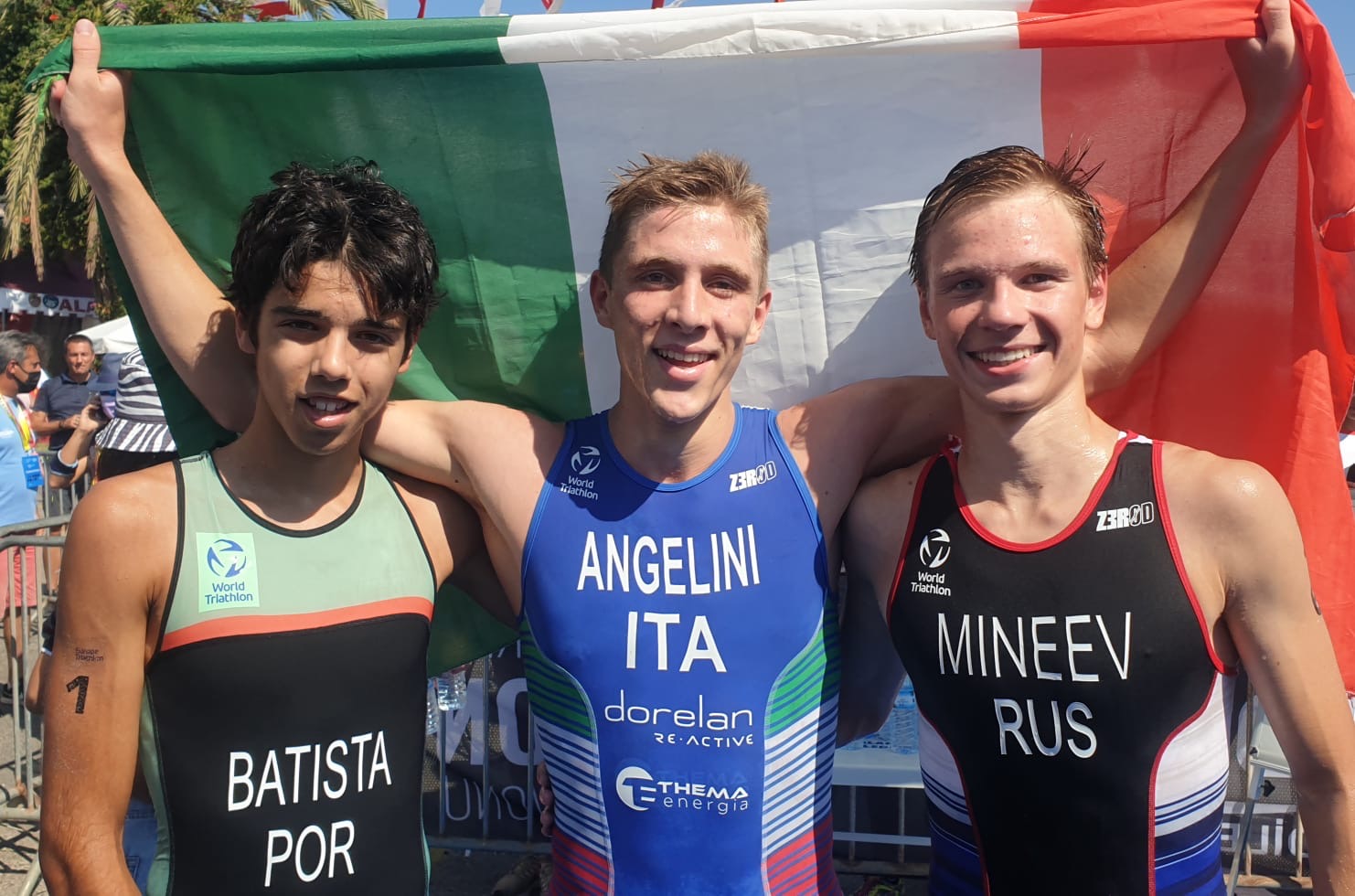 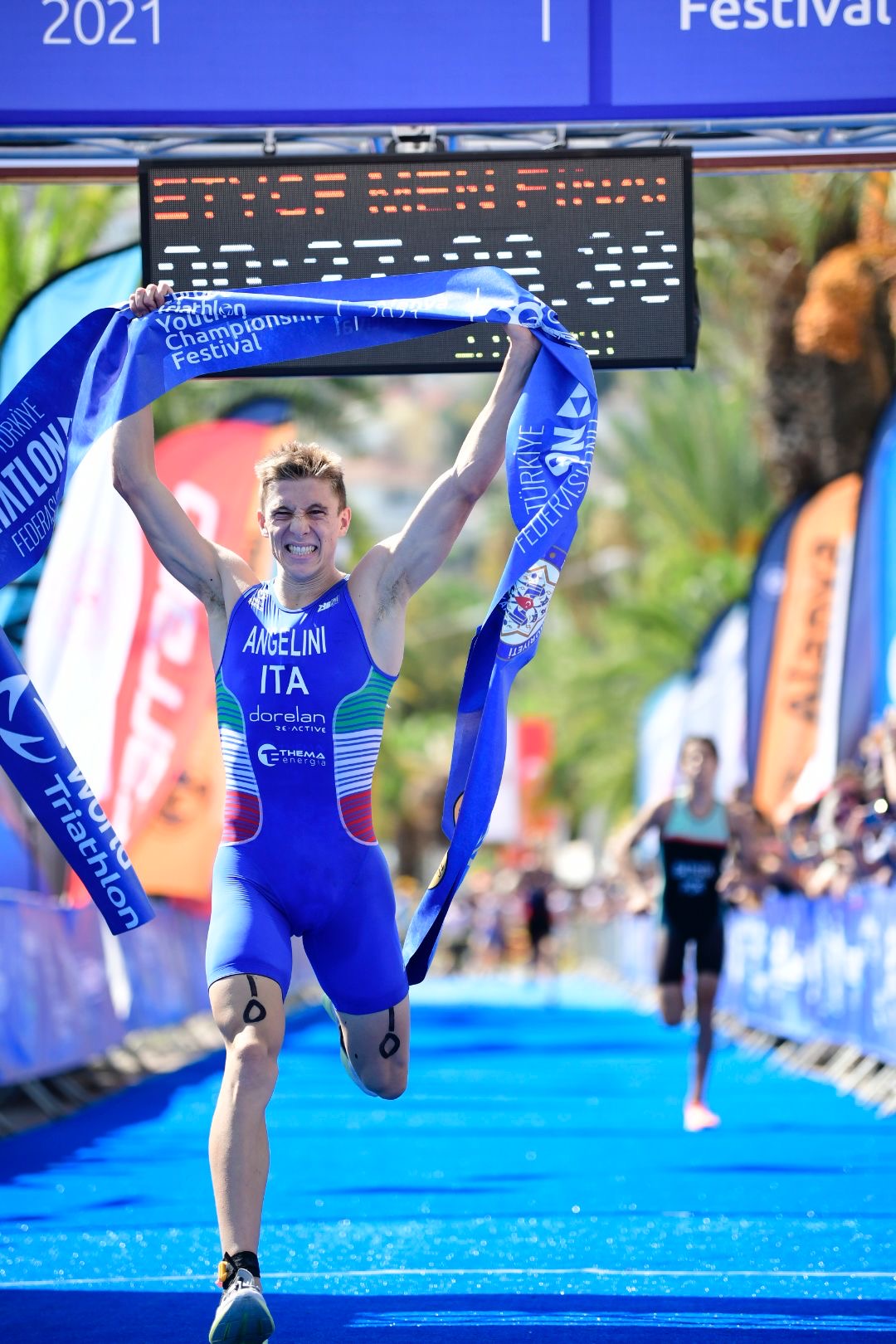 The best weekend of races ever for all the Youth athletes of the Triathlon Family in Alanya. The venue was also celebrating its 30th edition with all the European races and the Para World Cup which demonstrates the high capacity of the Loc of organising such top level competitions. We would also thank everyone involved in the event which resulted amazing indeed. 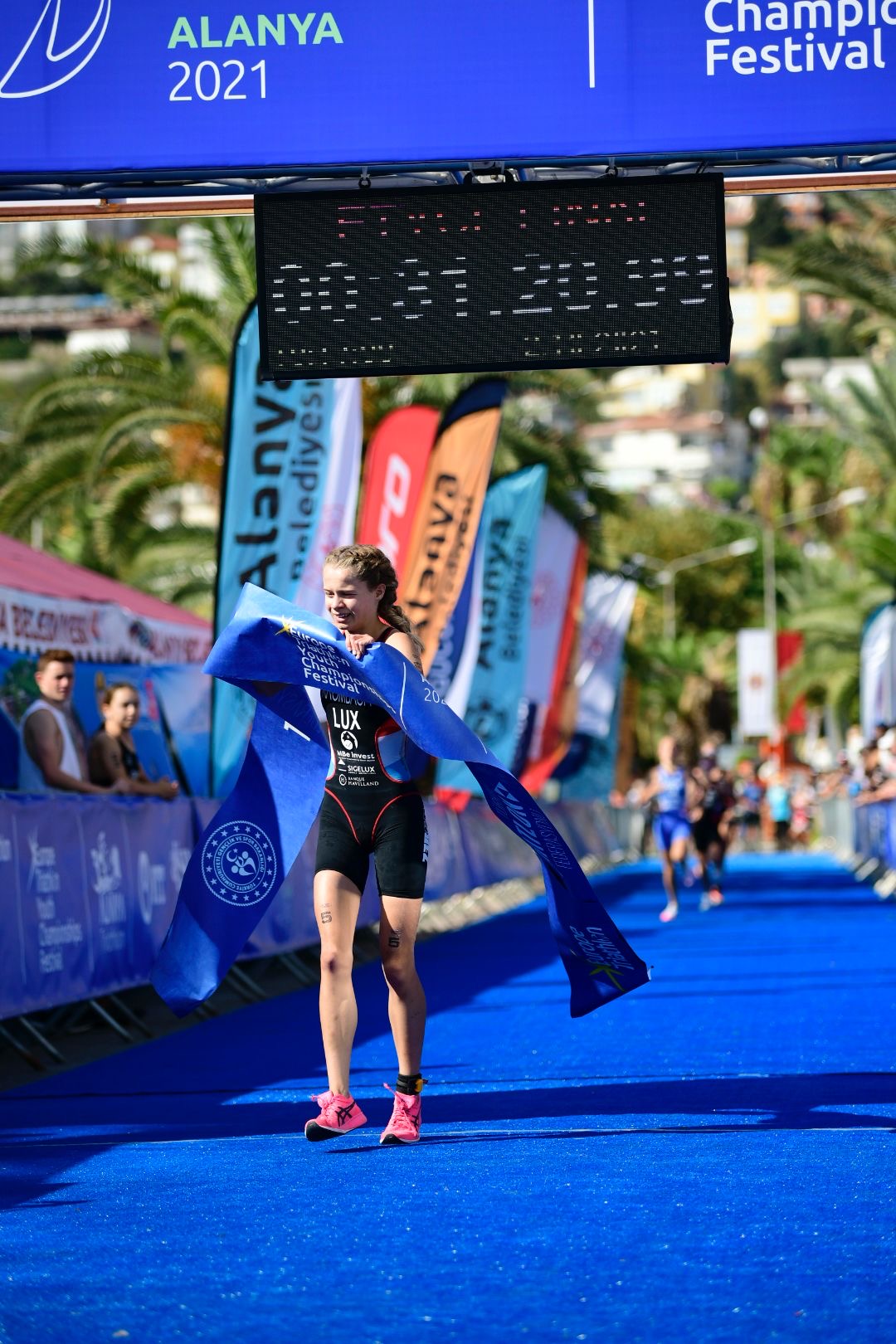 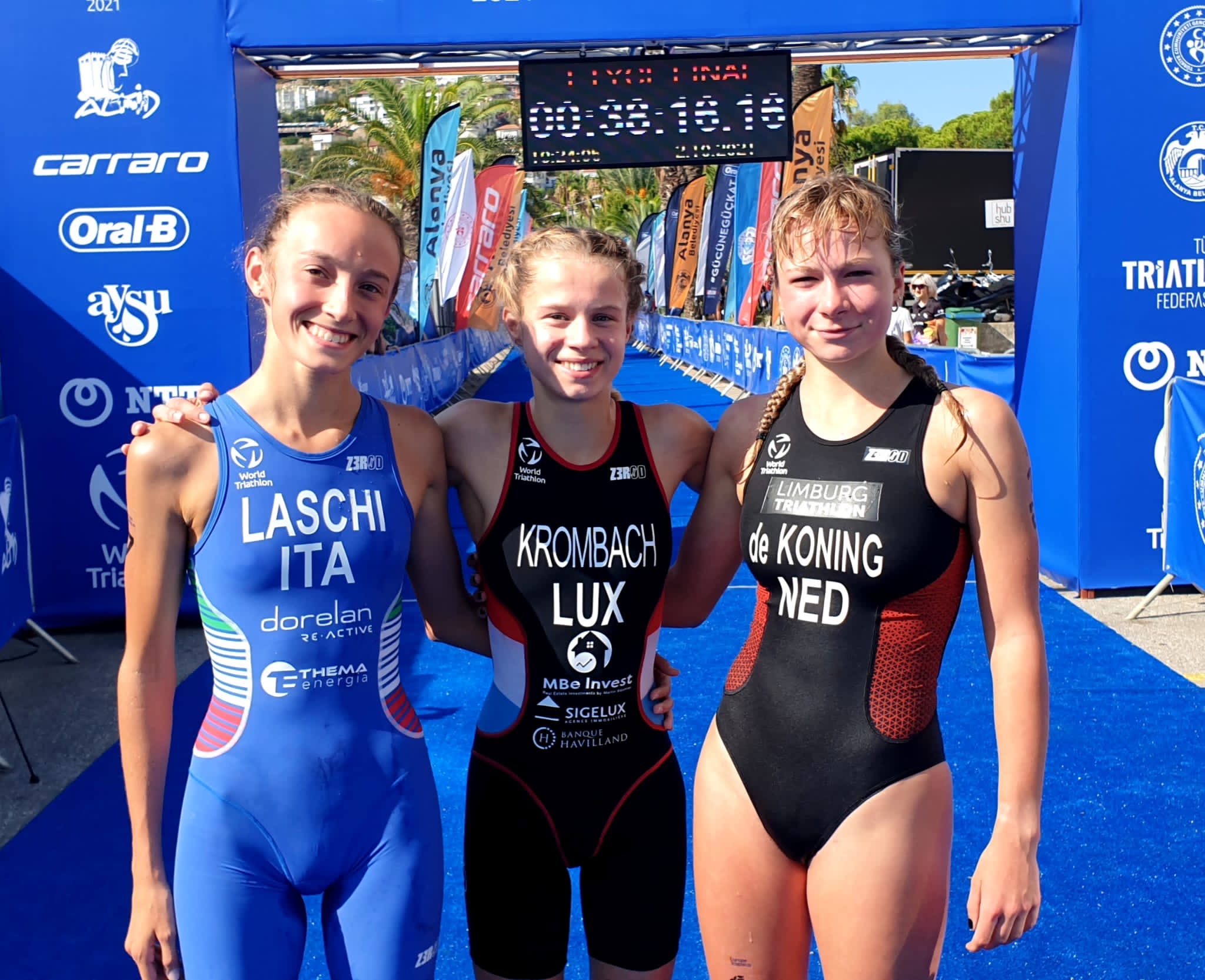 A marvelous day for Luxemburg in winning a gold medal in the women’s European Youth Championships with Mara Krombach and for Italy with Fiorenzo Angelini that showed such incredible performances and launch them in the international high level universe of Triathlon. 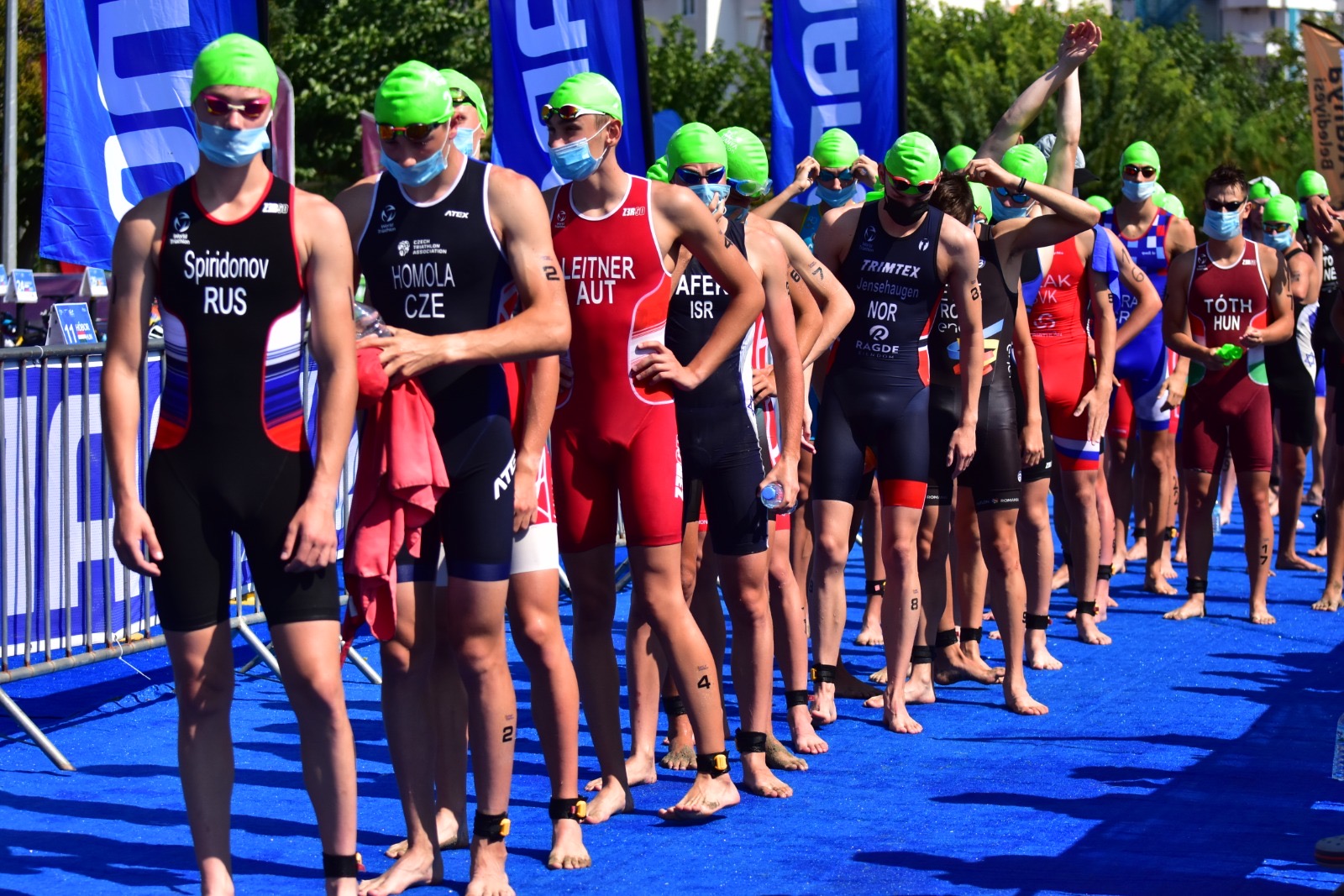 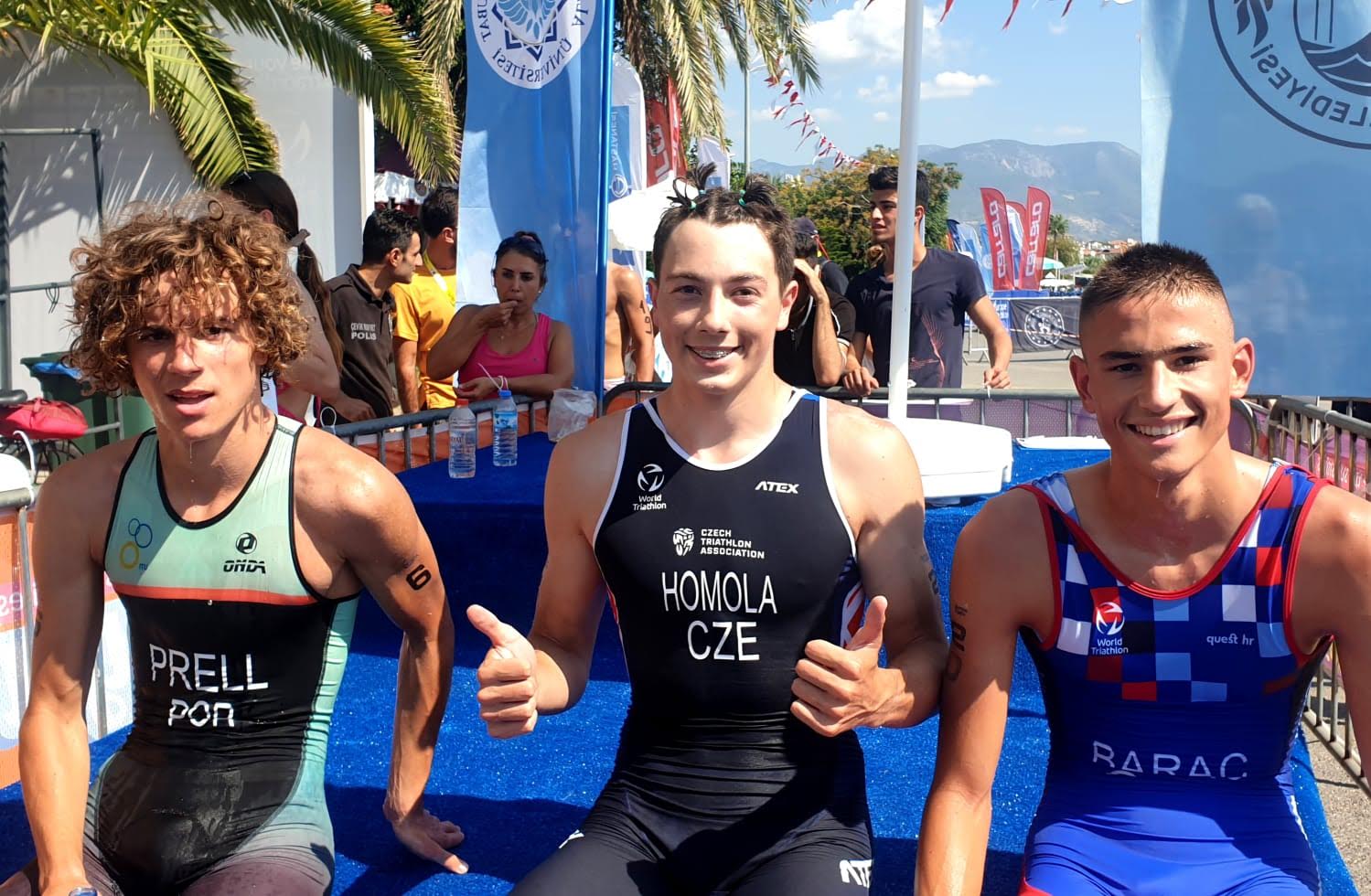 The weekend started on Thursday with the semifinals that allowed to the athletes racing to qualify for Saturday’s final B and the big final A.
The day began with the Final B women in which Matilde Silva Santos (POR) finished in first in 32:26, followed by Aleksandra Ferchmin (POL) 32:31 and Katerina Hadranova (CZE) 32:32. 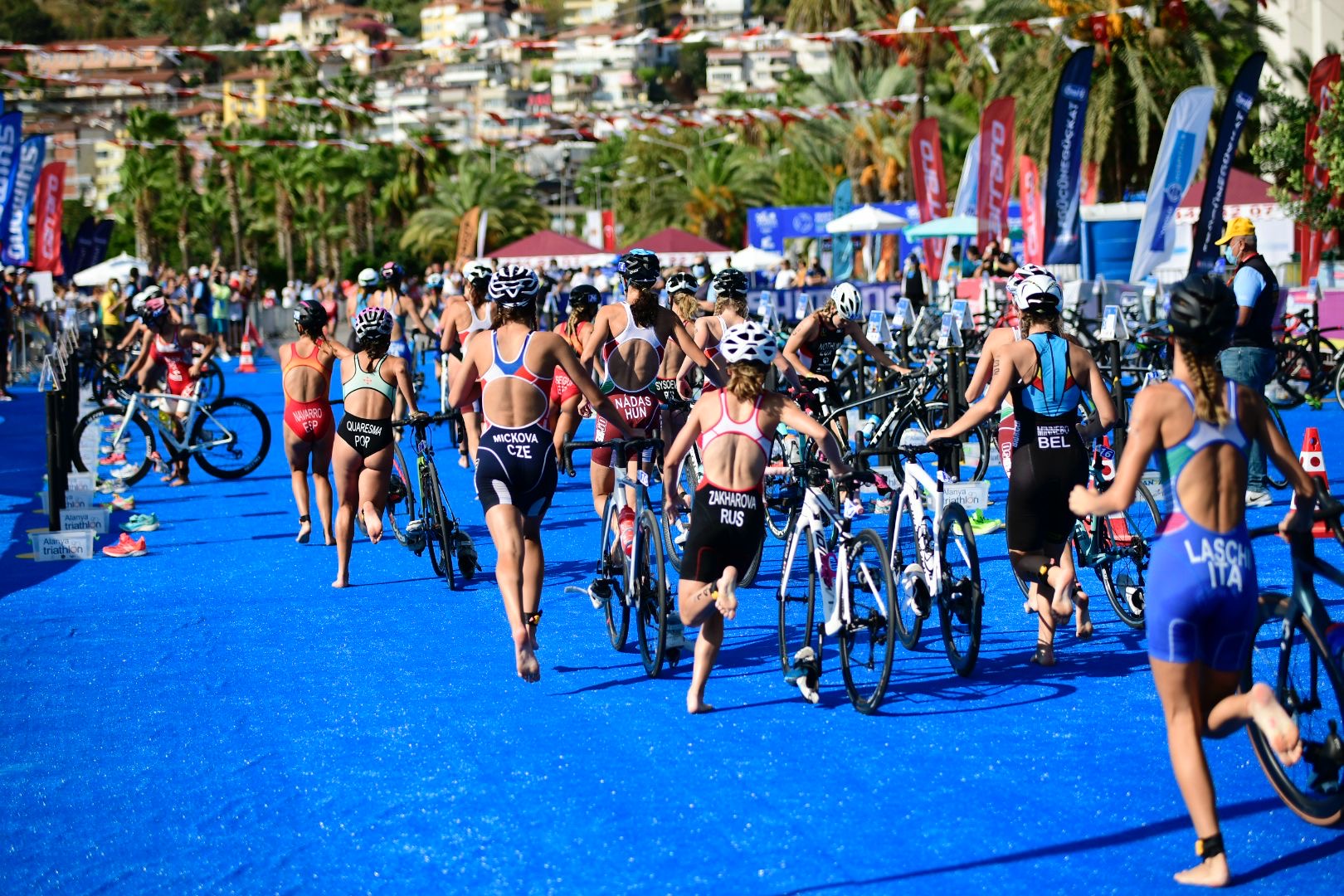 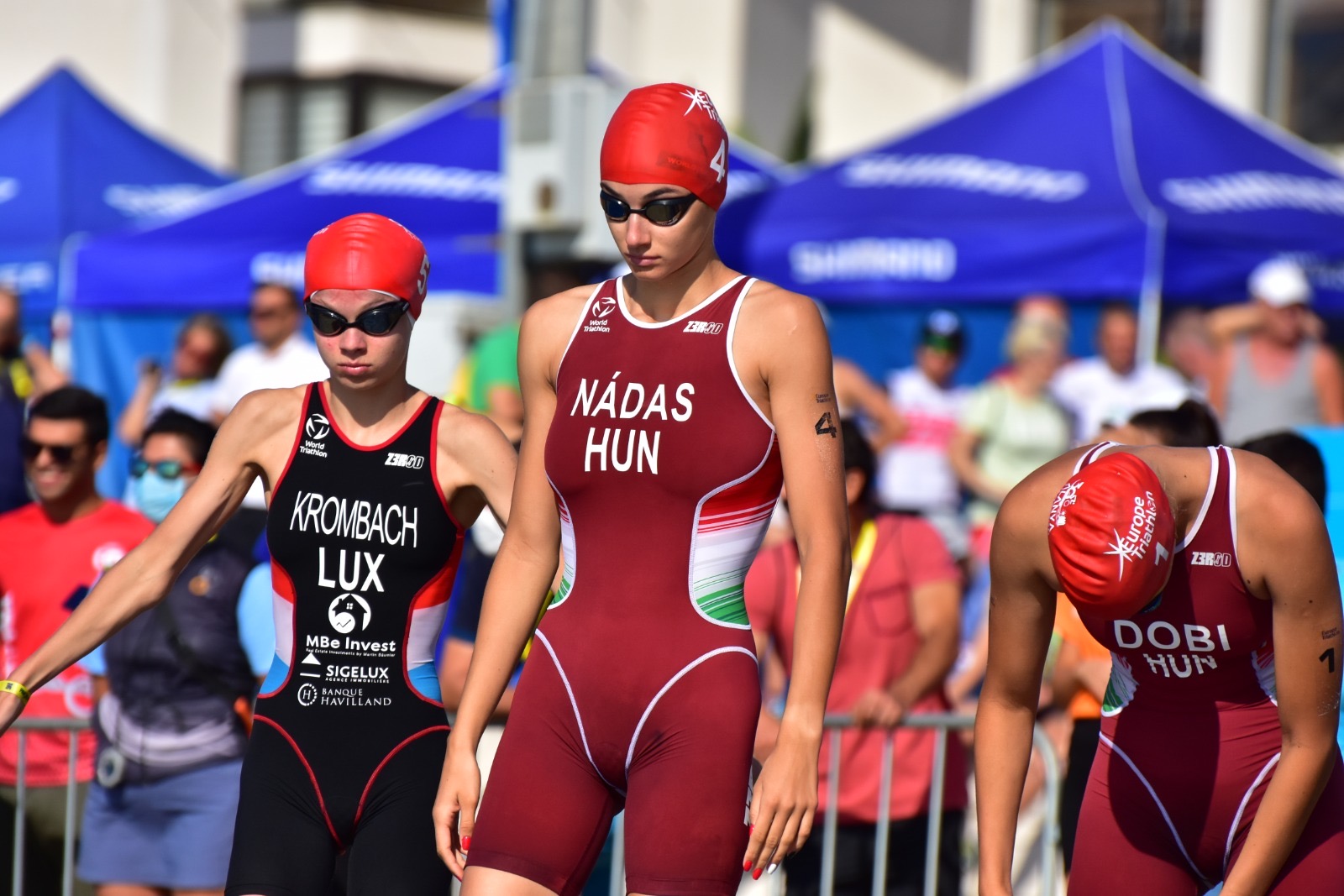 It was then the time of the Women Final A  in which we were indeed expecting another great performance by the 2021 season revelation, the Slovakian Margareta Vrablova but something probably went wrong and the race produced an unexpected and diff result. In fact never before a Luxembourg woman reached a gold medal in an European event, and today it was the right day for it. Mara Krombach brings home such an important result that launches her into the young stars in the international future of this sport and of her Federation. She grabbed the finish tape with an incredulous face probably not even expecting such a marvelous end of day after her bronze at the beginning of the season in Caorle now she is crowned Youth Champion in Alanya in 31:22. In silver in a furious sprint the Italian Rachele Raschi 31:27 who imposed herself over Sonja De Koning (NED) 31:28 and Daria Zakharova (RUS) 31:28.
Just the time to breathe and everyone was ready for the Men’s Final B line up. Final B was won by Jakub Homola (CZE) in 28:25, in second Christian Prell (POR) 28:33 and then Gabriel Barac (CRO) 28:38. Final A Youth Men was the most important moment of the day indeed.Those guys are really stunning and at the end the finish was a super crazy and fast moment in which the main goal was that of grabbing the blue tape. The Italian Fiorenzo Angelini wins with the best smile ever, the Youth Championships Festival in 27:29 over the Portuguese João Nuno Batista 27:31 and the Russian Mineev Roman in 27:38. What great athletes are coming for the future of our sport! 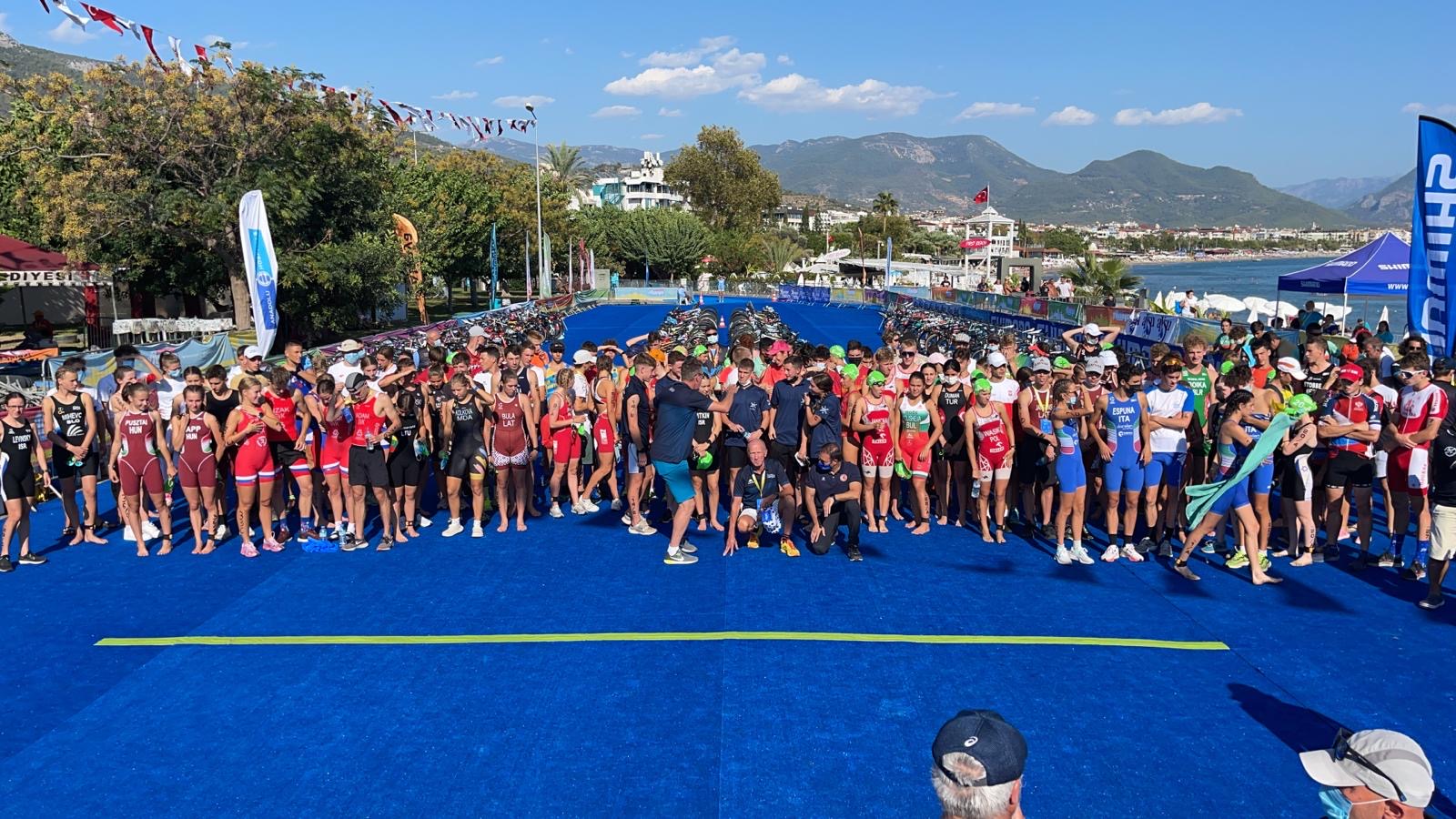 On Sunday at 4pm local time the Mixed Relay in which 22 NFs with the impressive number of 36 Teams and 144 athletes battled together for a final step on the European podium. Team Hungary wins the Mixed Youth Relay Championships in Alanya over Team Italy and third step on the podium  for Team Russia. You really did a great job and we are very proud of you for you are the future of Triathlon and we hope all the best results for next coming season! 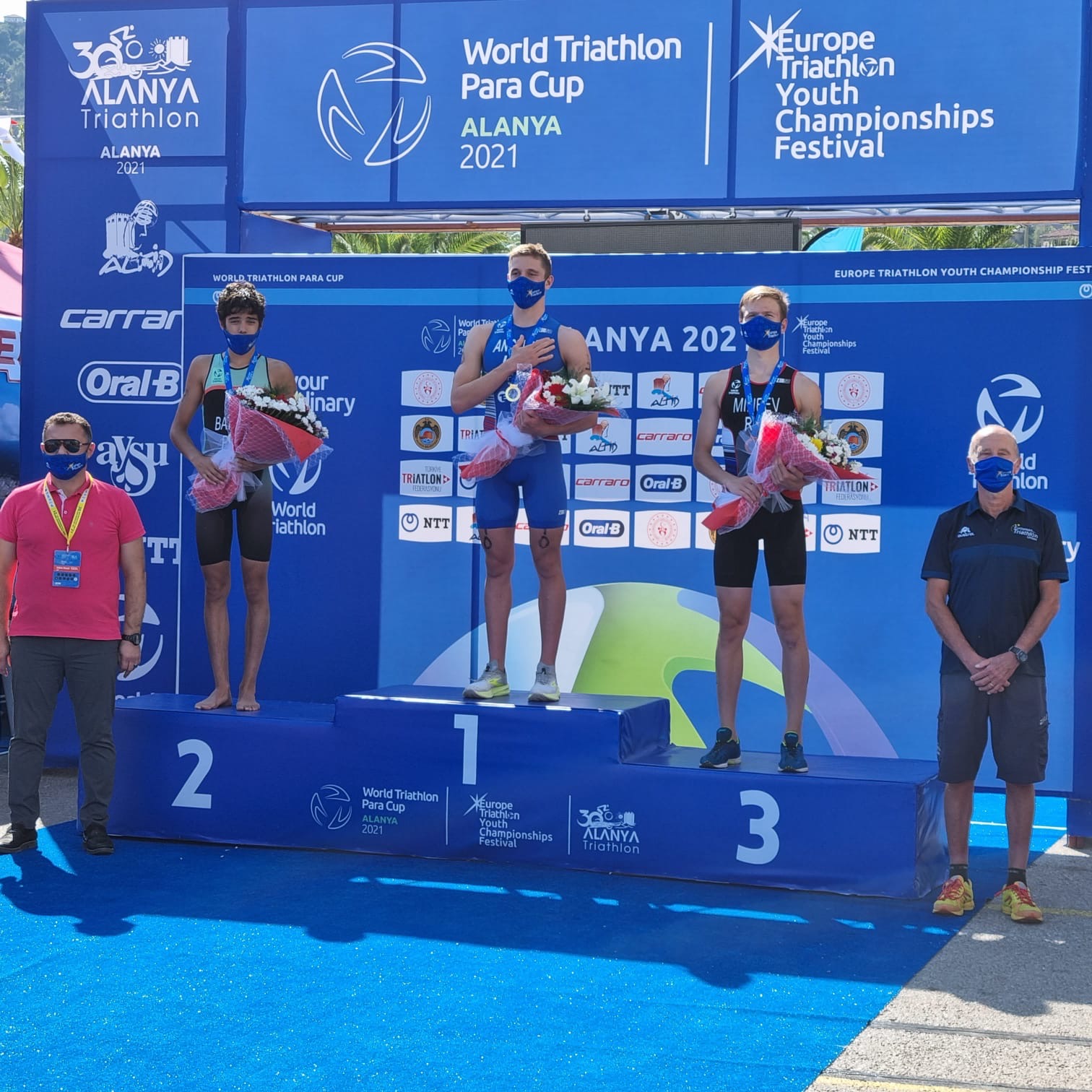 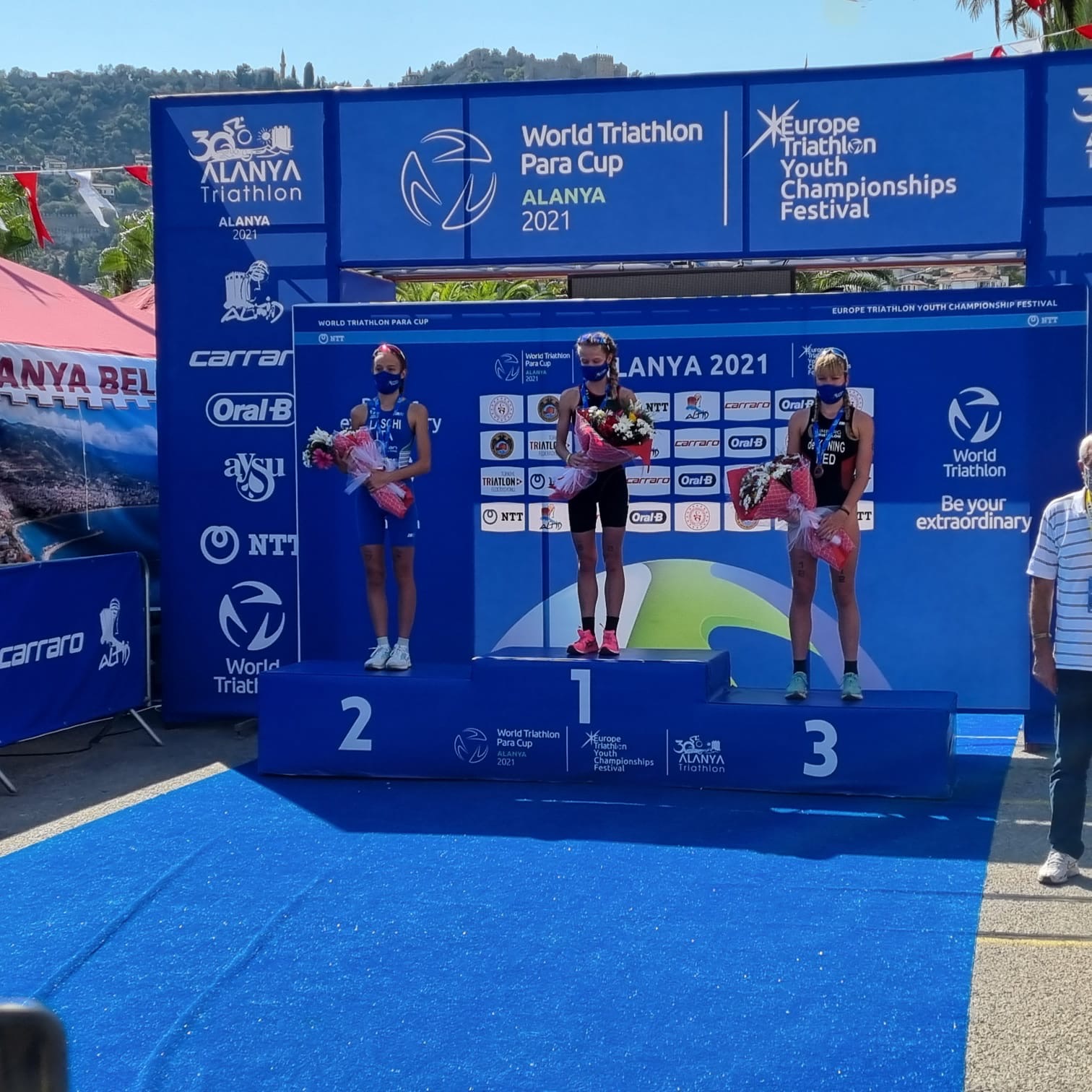