It is always good to see new events come onto the ETU calendar and this weekend in Slovakia, it was the turn of Žilina to test the international waters. An event that has 20 years behind it and an annual festival for multisport lovers in and around the region, would see this weekend, the first international event, with a pretty impressive line-up of junior athletes.

Some big names were missing but that gave even more opportunity for us to see promising new talent. It also gave the Junior Rankings Table a bit of a shake-up.

With the weather looking good, it was the junior women who started first. A not so deep water start worked surprisingly well.

It was Italy’s Bianca Seregni who led them out of the swim.  The Italian team looked strong as the athletes made their way to T1 with 4 in the top ten. Just on her heels was Chiara Magrini in her first international event. The two Italians had a clear lead over the chasing group, with local favourite, Kristína Jesenská having to do some serious catching up. 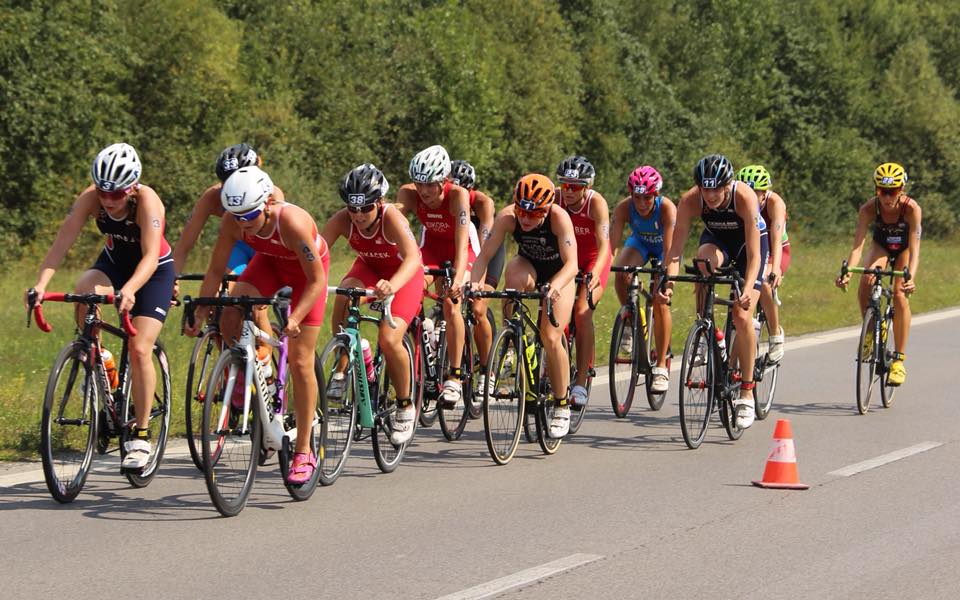 A lead group soon established itself and at 14-strong, there was clearly a chance that they could work hard and pull away from any chasing athletes.

The 14 worked together and it looked pretty likely as the athletes came into T2, still the same group of 14, that the medals would be shared between them. Italy looked strong with Seregni and Slovakia looked in with a chance and the home crow support for Jesenská but Austria, the Netherlands and Denmark could still threaten. 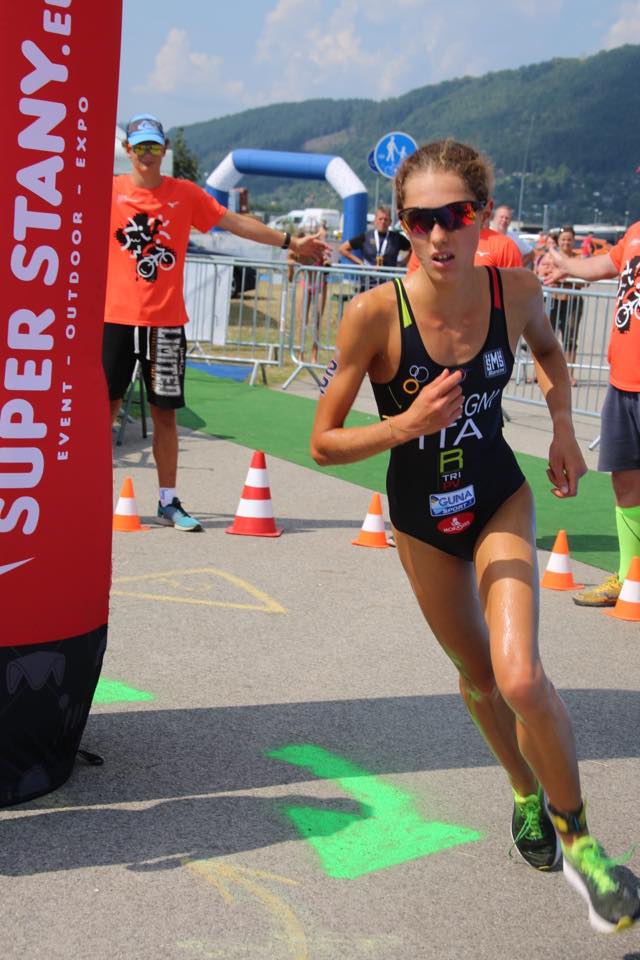 Seregni’s easy running style soon took her to the front, with the crowds urging on Jesenská, who followed some 10m back in second. 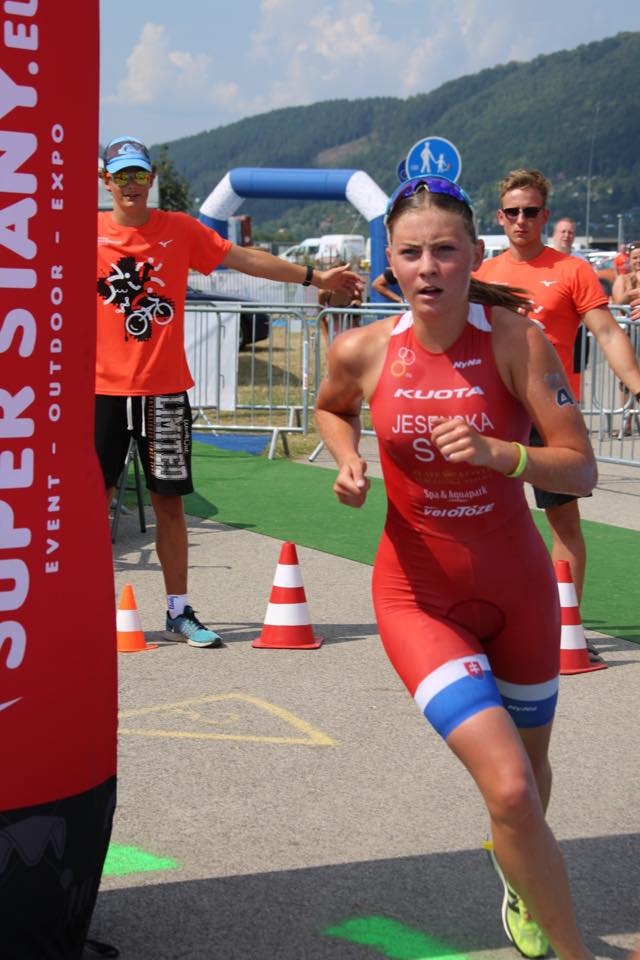 The lake-side run, with its dead turn gave the leader every indication she needed. She was leading and she knew what to do to keep that lead. She could also see that her teammate, Costanza Arpinelli, World Junior Duathlon Champion, who had missed out on the main group on the bike after a struggle in the swim, was tearing up the pack and advancing faster than any other athlete on the course. Suddenly all the work that Jesenská had done was coming apart as she could see how close and how threatening the presence of the speeding Italian was.

As Seregni crossed the line, raising the finish tape high, the silver medal hopes for the home favourite were wrenched from her hands as Arpinelli sped past and made it an Italian one-two. The crowds cheered Jesenská home for bronze. 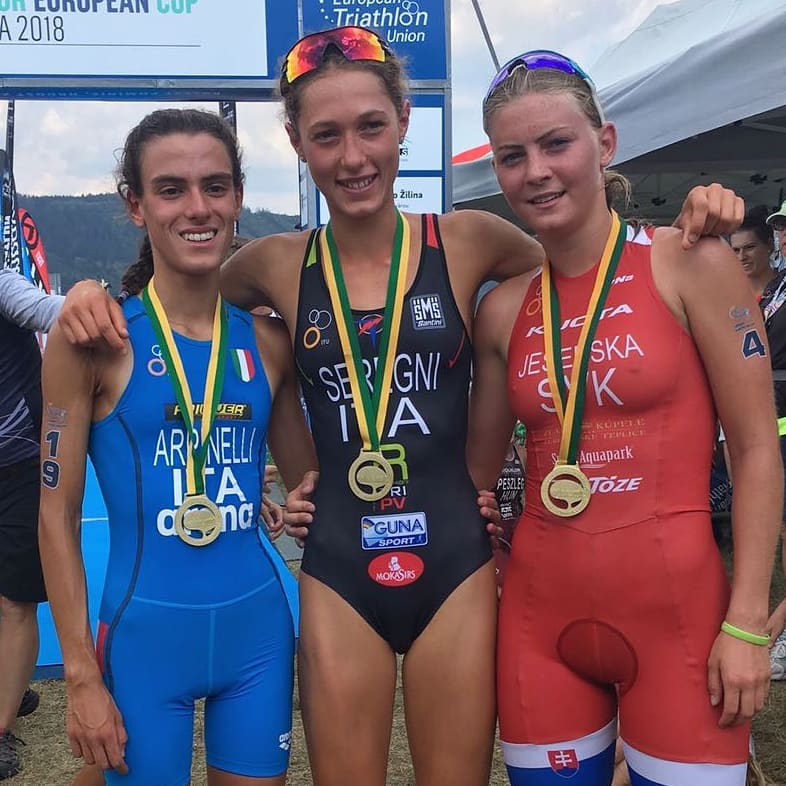 The Junior Men were lined up for their introductions and then allowed to take up their position in the water. Their start was not quite as tidy and controlled as the Junior Women, but it still worked. 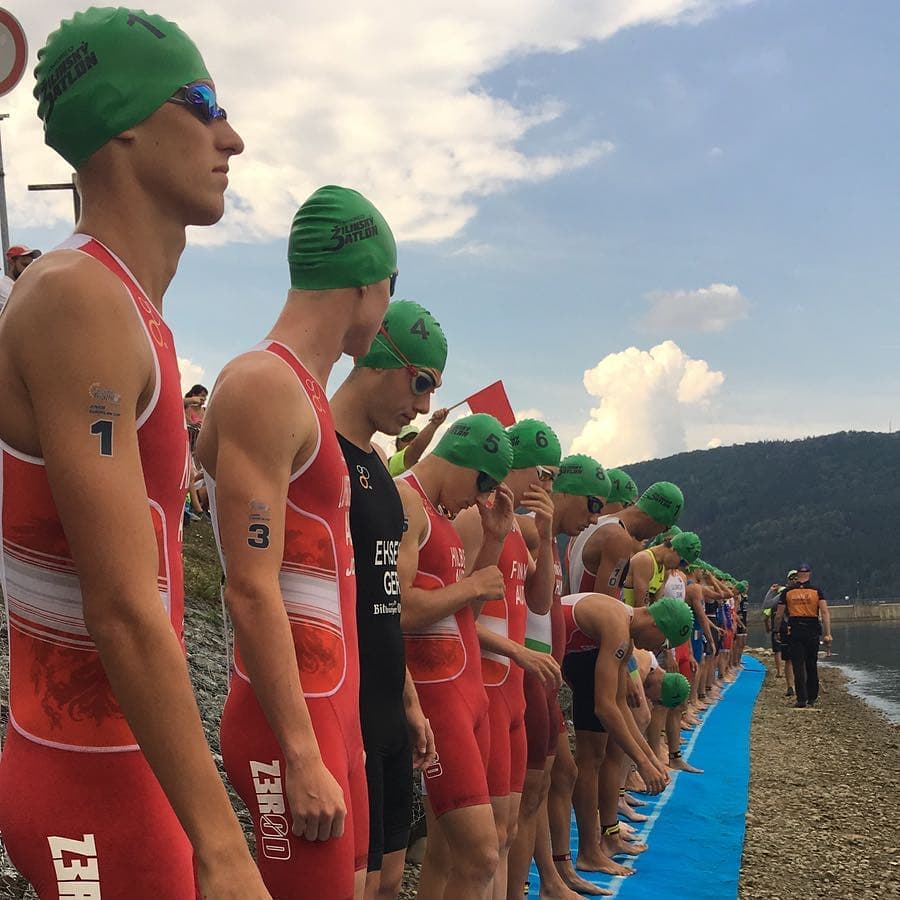 First out of the water and making the spectators wonder if this was going to be a truly magnificent day for the Italians, was Nicolò Ragazzo. His swim power pulled him away from the chasing Hungarian, London-based Aurél Sinkó-Uribe. The Hungarian has been showing great form this year both internationally and on the UK circuit.  Together with Ragazzo, they would be a formidable power out on the bike course but they were not alone. Simon Folens joined in the fun. With 15 athletes making it out of the water in short time, there would be a battle for a position at the front and following a crash, the leading group was down to five athletes, who successfully made the breakaway. 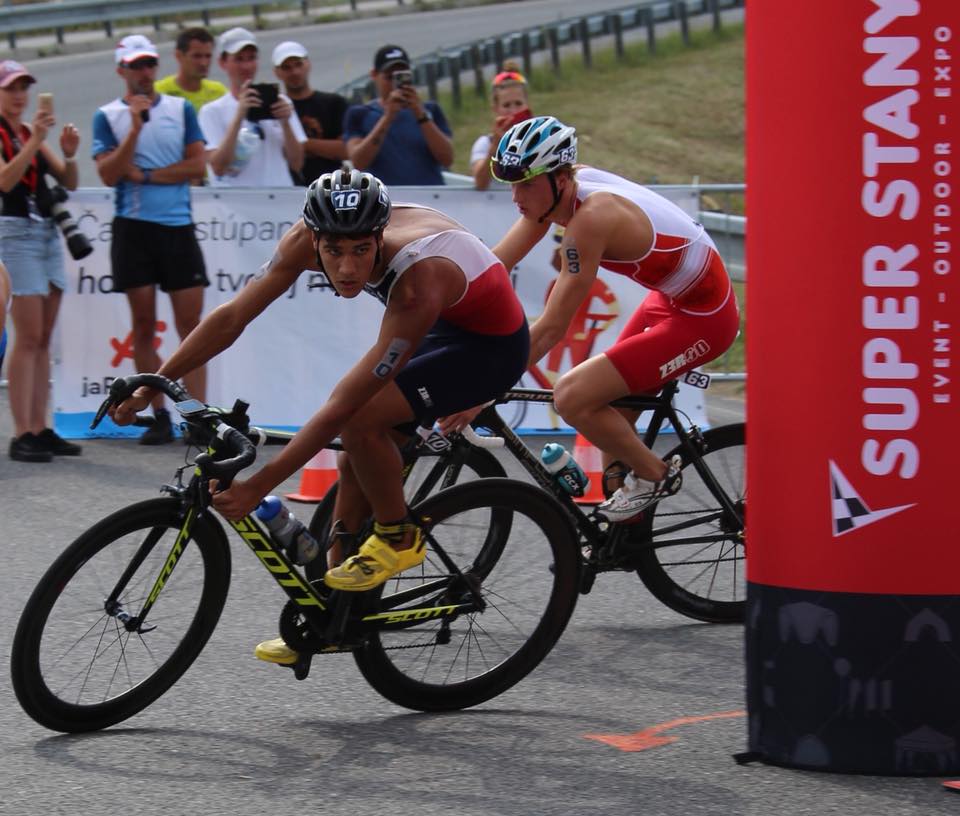 The sunshine that the women had enjoyed suddenly left the venue and a heavy downpour made the roads treacherous. 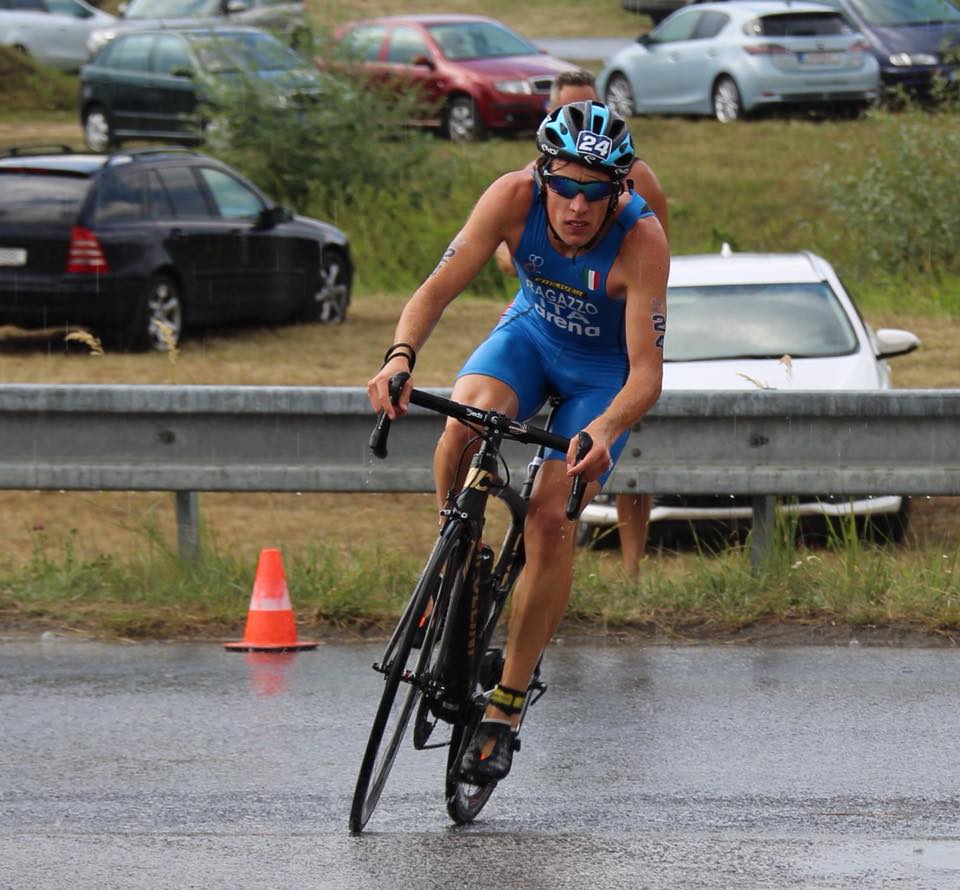 As the hot roads, now drenched in fresh water became slippery, the leading five; Ragazzo, Sinkó-Uribe (the older), Folens, Tjebbe Kaindl AUT and Chris Ziehmer GER, made it safely to T2, having worked well together to keep the pace high. For Folens it was not to be and sadly he recorded a DNF. The Five were down to four and there were only three medals up for grabs. 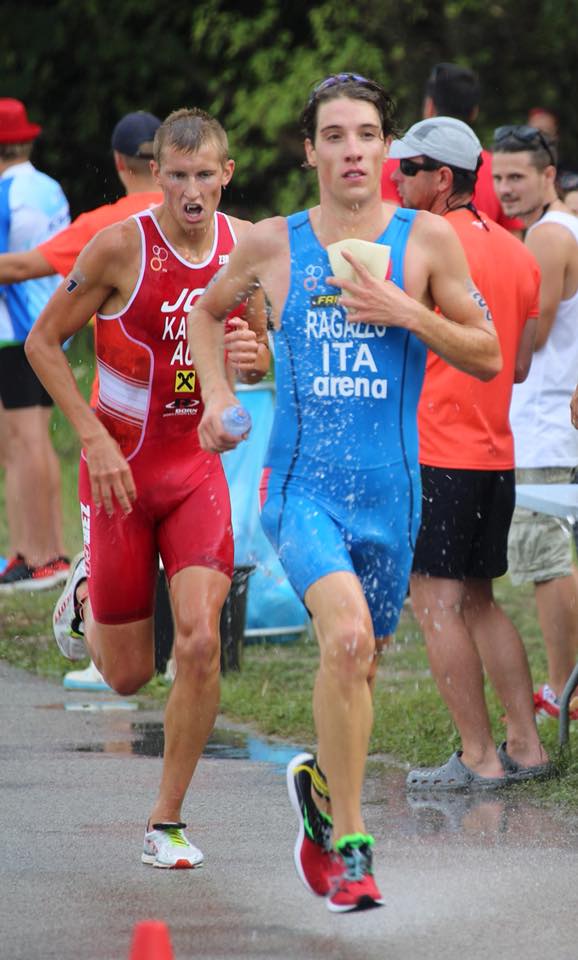 Out onto the run and the Azzurri uniform was clear to see. The red uniform of the Austrian was also clear to see and the two of them were locked together. Having missed the podium by just one second in Tabor, Kaindl was determined to set the record straight and get a medal for himself and points for the Federation.

All seemed to be going well until the Italian kicked about 800m out from the finish. 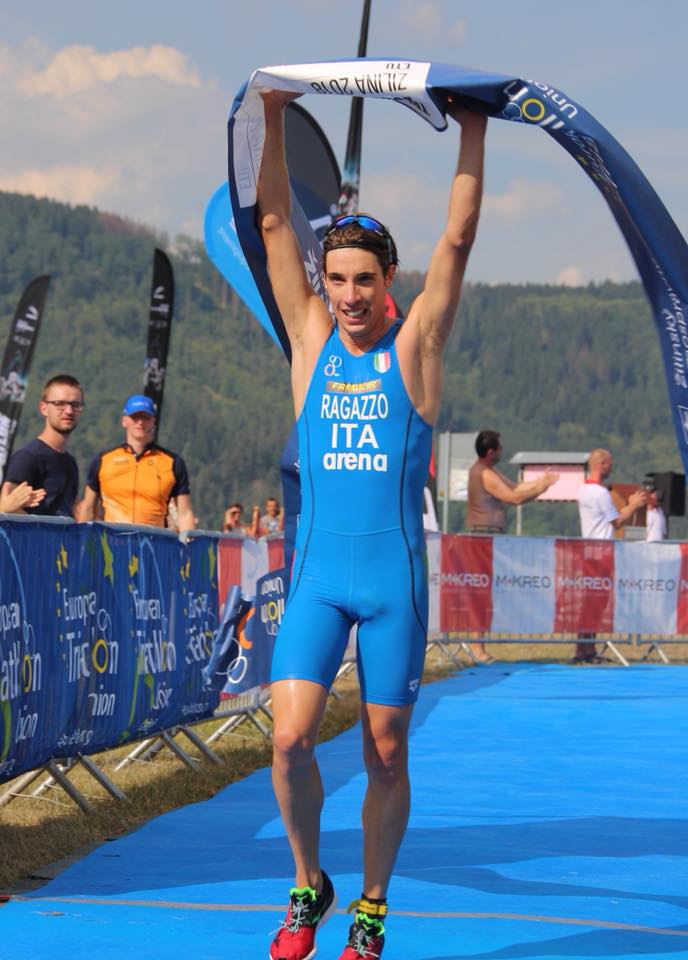 Kaindl did his best to hold on but, almost in a mirror-image of the women’s race, an athlete with supreme running pace sped past the Austrian. Giulio Ehses GER had missed the lead pack on the bike having lost time in the water but a 16:09 for the final 5k took him all the way to silver. 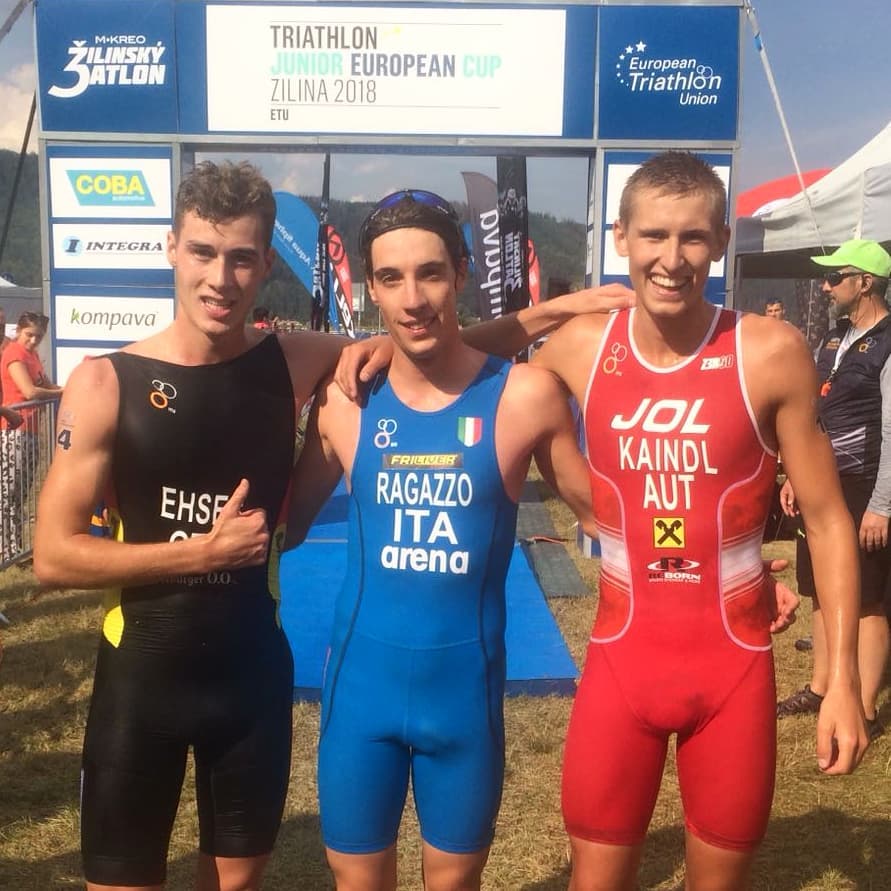 The great performances from the Italian team has delivered valuable extra points to them and they move up to 4th in the ETU Junior Rankings. Hungary still slightly ahead but Israel and France are still topping the table. After their success in Tartu, with two junior women on the podium, the French team has set the bar high. 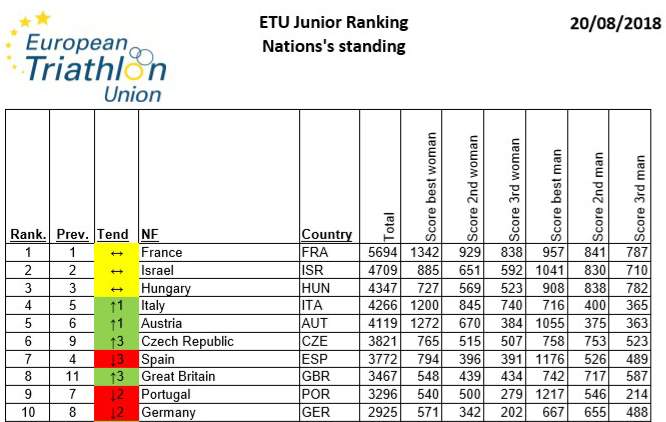 With only a few races to go until the season is complete, the battle between the top five is getting exciting. Stay tuned for Tulcea, Zagreb and Alanya for the final three races. 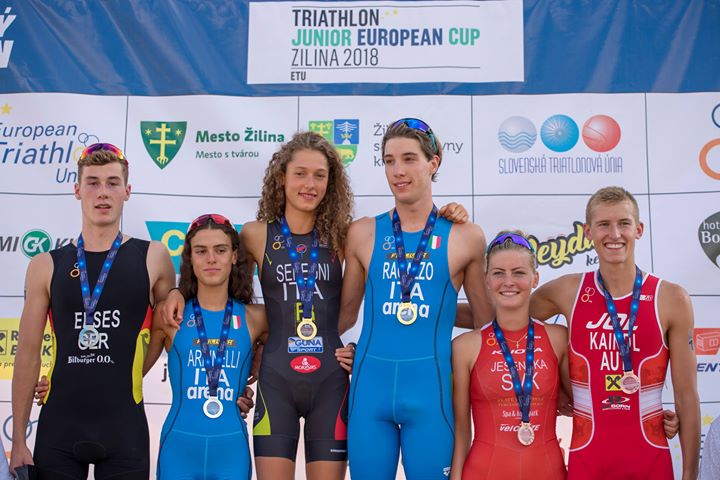 Žilina as a race though?

We saw exciting races for both men and women. A lovely location and an enthusiastic LOC. 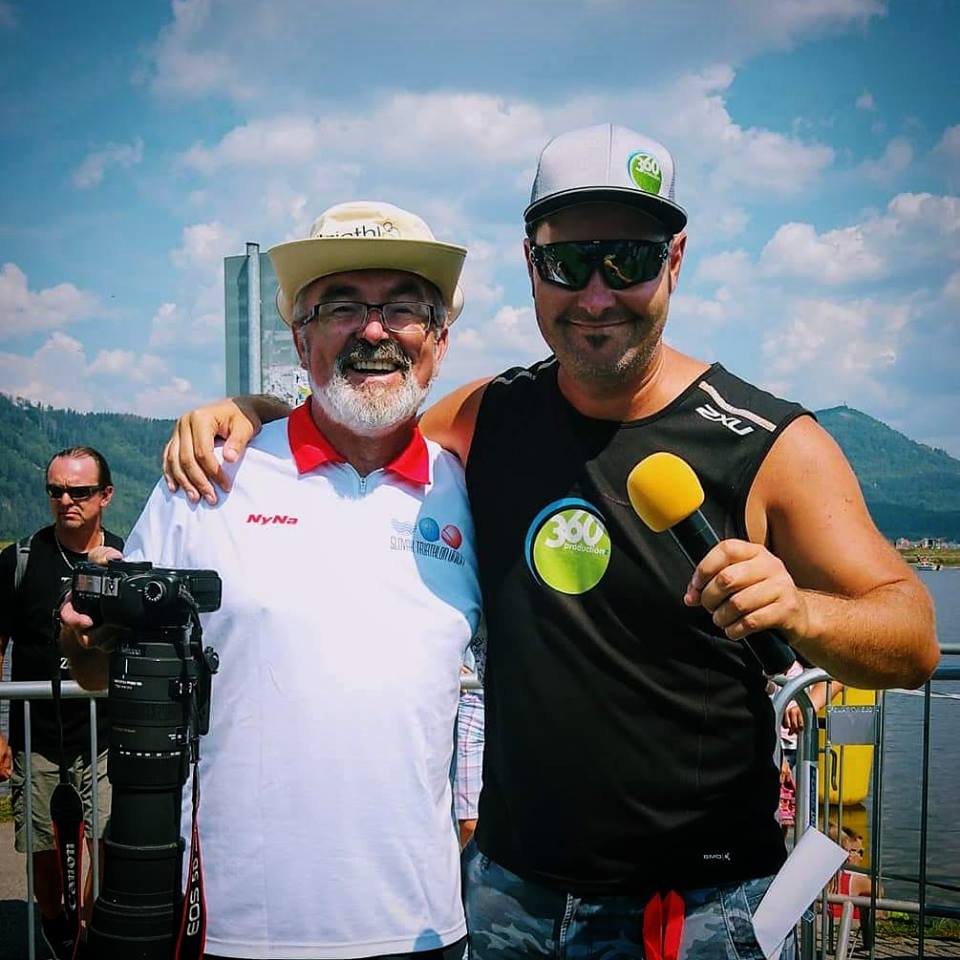 A big thank you once again to Christoph Totschnig for capturing some great images during the race and also to Herwig Grabner, representing the ETU Executive Board and Veronika Jurkovič from the LOC for keeping us updated through the race with videos and photos.

Peter Sukenik was the official photographer at the ETU Triathlon Junior European Cup Zilina, Slovakia. He has made the following albums available.