Down to the line in Funchal as Elite Men once again hit the finish together.

The racing season for ETU has now officially ended. It did so in style and in a great location. Funchal offers a good open water swim in waters that are warm enough to get rid of wetsuits. A classic bike course, with snappy climbs and fast descents is rounded off by a crowd-lined, pan-flat 5k.

The ETU Rankings Cup Final last year saw a photo finish and so it was again this year as Azerbaijan’s Rostislav Pevtsov just edged the tiniest fraction ahead of GB’s Sam Dickinson in a nail-biting finish that gave him the overall ETU Rankings win.

The women’s race saw a runaway victory for Germany’s Lisa Terstch who rounds off this season with not only the victory at the race but the overall win in the Rankings. €40,000 will be shared between the lucky 20 athletes (10 male and 10 female) once the ITU Results Gurus have done their checks and double-checks. This end of season payout is in addition to the event prize-money and athletes should use this form to send in their claims to ETU. (LINK TO CLAIM FORM)

How did it all go?

Well, for those of you who were lucky enough to watch the event live, either at the venue or on the superb live-feed. The swim did not break up the pack as much as anticipated. Michelle Derron SUI, Lisa Tertsch and Poland’s Alicia Ulatowska led.  Quinty Schoens NED and Bianca Bogen were tucked in behind and to the delight of the home crowds, Inês Rico PRT was right in there.

The swim exit to Transition is a short run but as we know, so many things can go wrong in the journey from swim to bike. Yuliya Yelistratova UKR in her usual position in the swim and with every potential of bridging the gap to the lead pack but disaster in T1 as she lost valuable seconds and by the time she was rolling on two wheels, the 10-strong pack of leaders were attacking and pushing the pace.

As they got themselves sorted; feet into shoes and fluids on board, the course presented a series of technical challenges before the first climbs. After the first turn, they could see what sort of a lead they had and that was every incentive to build on the pace. Schoens did her best to attack and did so on the long ascent, establishing very soon an impressive lead. Attacking on every climb, she was left alone by the pack. One moment it was stunning views of the blue Atlantic, the next, the athletes were deep inside the mountains in tunnels that cut through the rocks.

One lap done and she had a lead of 10 seconds. Could this last?

Schoens had shocked them into action and in due course the greater power of the peloton caught up to the Dutchwoman. Behind, Yelistratova was battling to claw back some of the lost time but it already looked as if this would not be a podium day for her.

Tertsch was well-placed but in the lead group was also the ETU Rankings Series leader, Carlotta Missaglia and her teammate, Luisa Iogna-Prat. Spain’s Xisca Tous had shown great pace recently in Doha and so it looked like the final stages of the bike and certainly the run would be the deciding factor in the race. 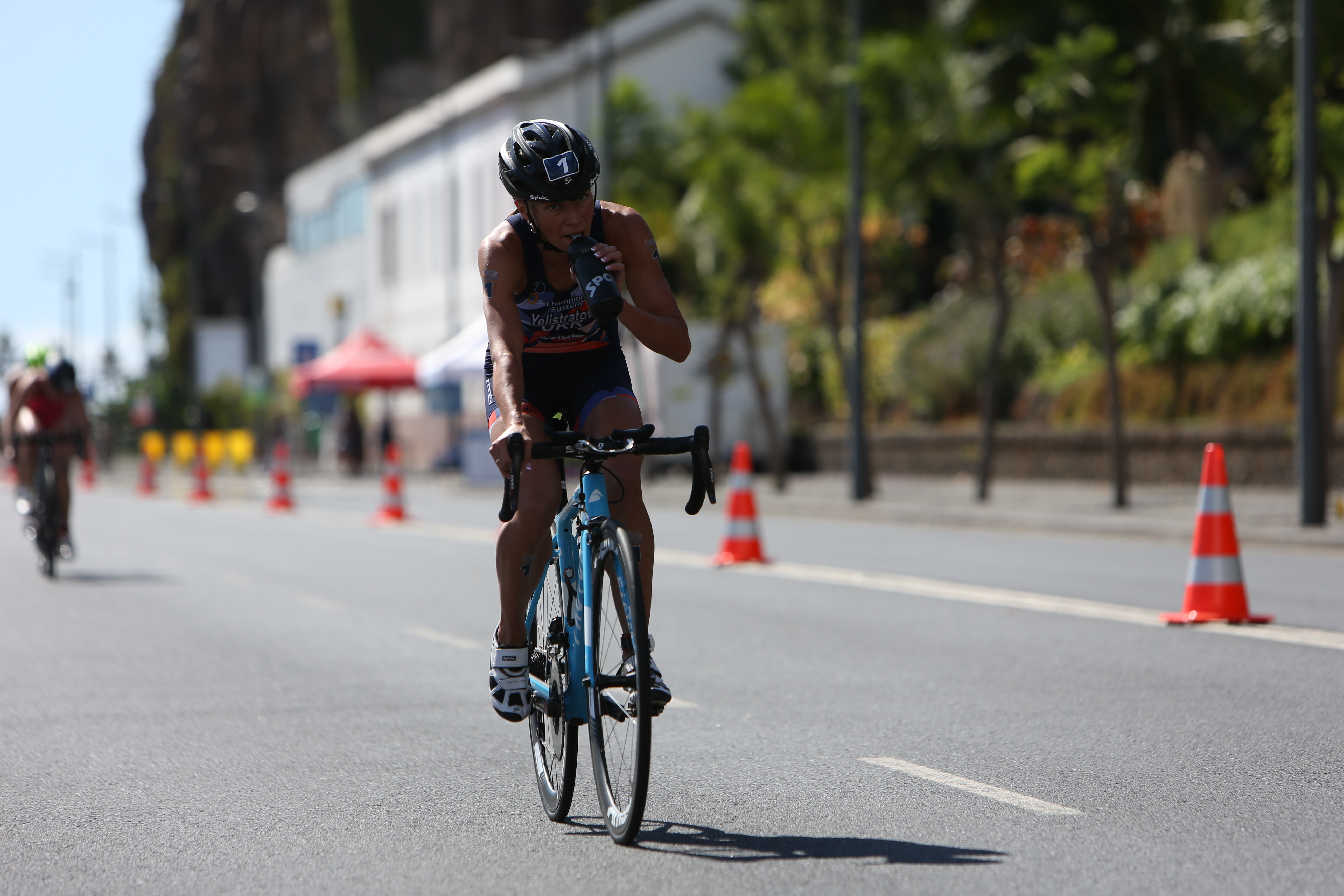 With the leaders already out on the run course, it was indeed Yelistratova who led the chase group into T2 but by then Tertsch had gone up through the gears and was pulling away easily to take the lead.

The peloton had been smashed and with the German leading, it was up to Tous, Iogna-Prat, Schoens, Missaglia and Lisa Schanung. Italy had three in the lead group but despite all the pushing of pace, none could match the German out front. 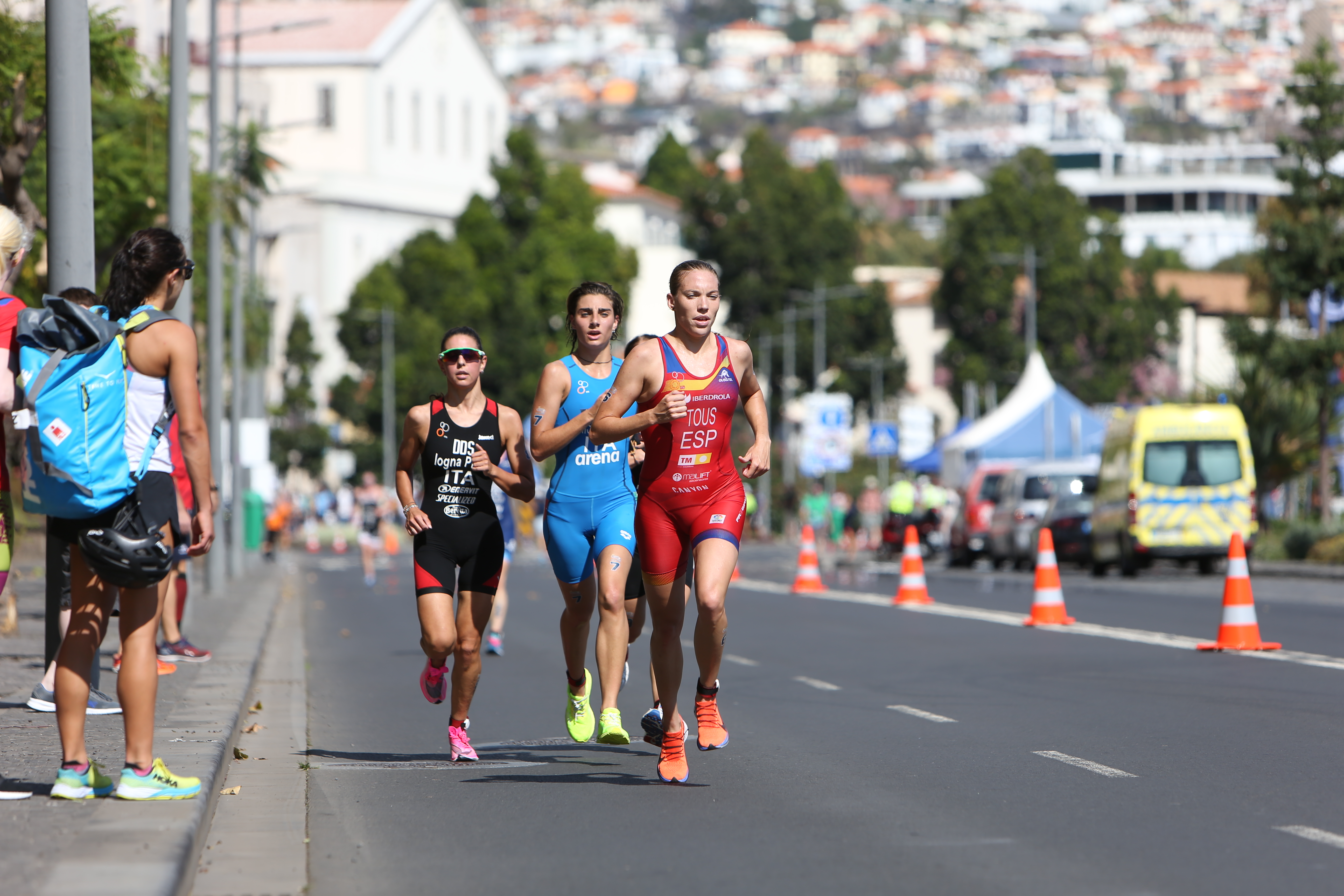 Tertsch cruised to victory with a blistering 16:57 run. She had to wait for almost a minute for the silver-medal winner to arrive and this finish had the crowds going wild as Tous and Iogna-Prat battled every step to the line. Tous had the legs and silver was hers. Bronze to Iogna-Prat.

Schoens had a superb finish to claim 4th, with Yelistratova coming home in 5th with another remarkable closing run.

Looking at the top ten, Italy can be delighted with the performances of its athletes in 3rd, 6th and 7th. A new generation coming through but the day belongs to Tertsch. “I was looking for a podium. A great race, I loved it. Always great to run at the front. I know that I am strong in running. My first time here. I love the landscape and the city. The bike course forces you to be alert. It was really interesting.”

The men’s race saw a huge line-up and the spectators that lined the course were treated to a great race from start to finish. With just 14 points separating Dickinson from the ETU Rankings leader, Pevtsov, there was a lot riding on this race and everyone there knew that the young Brit had to beat the Azerbaijan athlete. Live feed can be viewed here.

A great swim from Marco van der Stel saw him lead the pack out. On his heels was Jamie Riddle RSA and close behind was Germany’s Tim Hellwig.

Pevtsov was 7 seconds down and Dickinson 13 seconds off the pace but speedy transitions saw them in a good position to chase the breakaway that had been created by van der Stel and Alexandre Montez. The massive peloton soon formed. The risk of a kiss of wheels was great. The pace was not so high on the climbs and small breakaways were tried, watched and matched. When the breakaway came, it was French athletes who led; Mathis Margirier and Tom Richard worked with Carlos Oliver Vives ESP and of course, Dickinson was there, with Pevtsov and Hellwig. They worked well, sharing the lead and keeping the pace high as they attacked the hills and crouched low over the frames for the descents.

In fact the biggest gains were made on the descent as the small pack took the shortest lines.

Into T2 and it was Dickinson who performed the perfect move from bike to run. He was in the lead and had escaped. Behind, Pevtsov was assisted by his position alongside Hellwig. Pevtsov joined Dickinson and edged ahead. No glances back. No acknowledgement, the Azerbaijan athletes went past but the Brit gritted his teeth, thought of Yorkshire and latched onto the shoes of Pevtsov.

Dickinson was now in the best position; letting Pevtsov do all the work but in his mind … the victory and the ETU Rankings title. Pevtsov was every so often pulling away but each time his move was matched by Dickinson. This was going to be the gold and silver. Bronze was pretty much assured to Hellwig.

The race for the tape last year started as the athletes came off the road and onto the final metres of the race. Pevtsov and Dickinson had gone past that turn off and were heading to the final turn. Still locked together. The Brit breathing down the neck of Pevtsov. An early kick took him to the inside line as they came off the road and it looked like Dickinson had done it but a final surge from Pevtsov took him up to and alongside the Brit. A photo-finish that kept officials busy for a good time before they could announce that the gold had gone to Azerbaijan, with silver to Great Britain. Hellwig had secured the bronze for Germany. Dickinson, “I’d like to congratulate Rostyslav for such a great race. He really pushed me. Over the moon to come here and perform well. A really tough course. The bike course really saps the legs. Tough from start to finish. It’s been a long season and to finish with a sprint … I went really hard and hope it was enough on the day. Credit to the tough course that it went down to the sprint at the end. I was here last year. Loved it so much, I had to come back. Fantastic place. I’d love to come back.” A truly fitting way to end the long racing season. For some, a time to relax. For others, there are still races ahead of them. For all, a big thanks for giving us such great memories across Europe in 2019.

Photos, thanks to Filipe Pereira (#unspotdesignbrandingdesportivo).