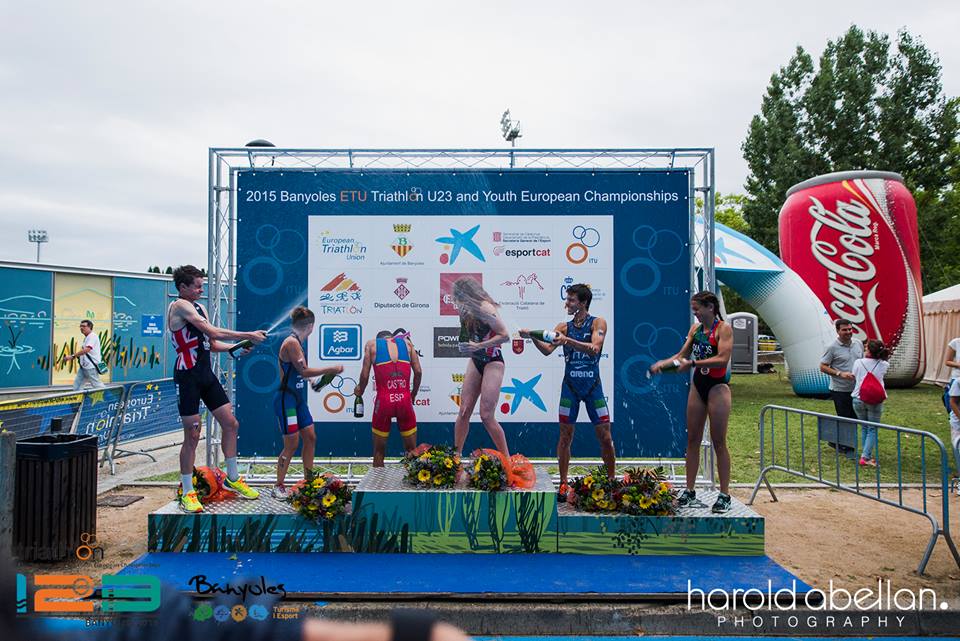 Banyoles provided a thrilling day’s racing in the ETU European U23 Championships on Saturday. For the women, we had predicted that British athlete Lucy Hall would dominate the swim and there was also expectation that she would work hard on the bike as she did in Geneva. What we saw was a determined and skilled attack at the race from a young athlete who really has progressed well.

Hall led the swim as expected. Leaving the others to struggle behind her. Clear water of over 17 seconds led her into T1 and after smooth and fast transition she was out onto the bike. Would we see others join her ? Would she just push ? Well, she did just that and before long had opened up a lead of 1:40 over a chase pack of 18. Behind her in the swim and forming part of that group, was Ditta Kristensen DEN,  Sara Papais ITA, Ilaria Zane ITA and Melanie Santos POR. Of these, the fastest runner was Zane with Santos and Papais behind her. On paper, Hall’s running was well down on their pace and so the buzz was, “has Hall gone too soon, too fast and too alone?”

With her lead reduced as she entered T2, the next 10k would be critical but somehow Hall managed to keep some of her lead and crossed the line with a solo effort paying massive rewards. Her gold is a true mark of dedication and her high-altitude training in the build-up to Geneva has certainly paid off. Perhaps also her confidence has grown after showing the Geneva crowds that she is now well on the way to challenge the older British women all the way to the line. 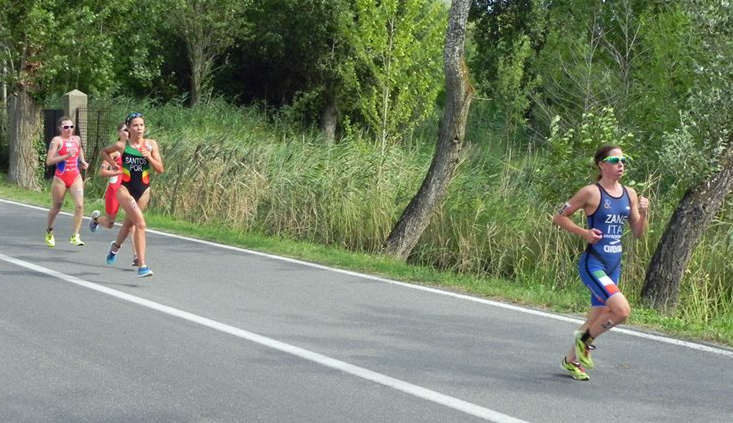 Behind her the battle for silver and bronze was being fought by athletes from Italy, Denmark and Portugal. 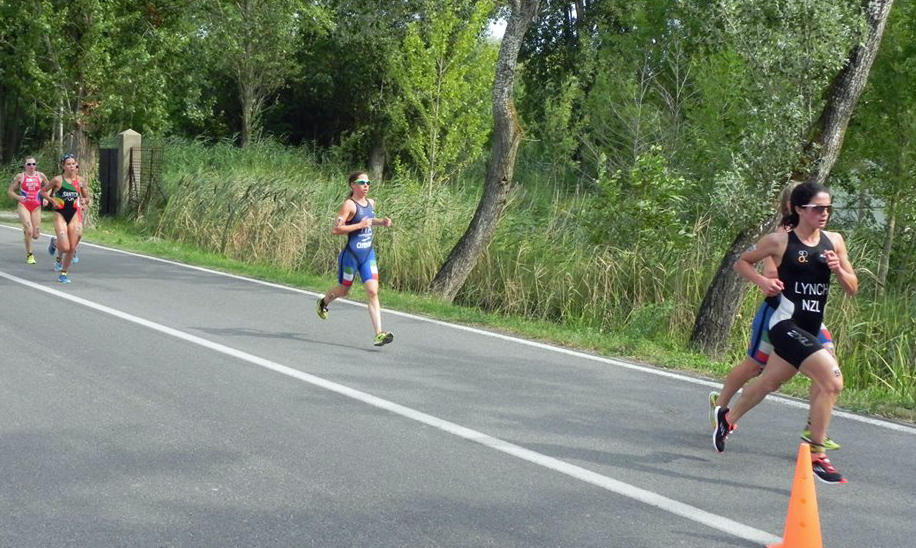 The lone Kiwi Deborah Lynch was there too but against the determination of the other Europeans her battle would be a tough one. 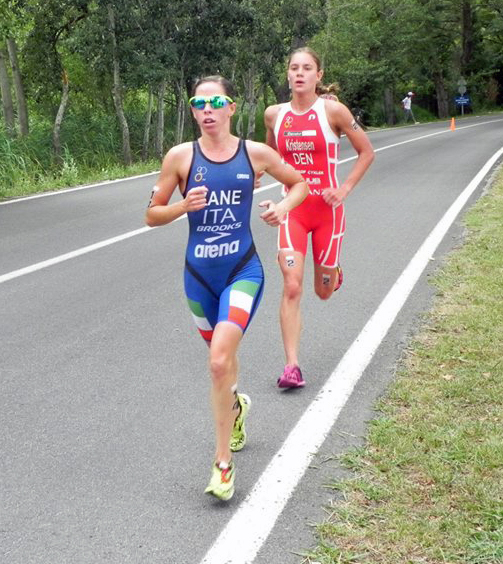 Initially she led but was soon caught by Zane and Papais, with Santos and Kristensen. Then the battle changed and it was the Dane against Zane, with the Italian having the edge. Then the chase for silver was between Santos and Zane. It was the Italian who had the edge and with the fastest run of the day, she took that silver medal. Santos settled for the bronze but a strong run from Papais, took her ahead of Kristensen to underline the strength of the Italian team once again on the European Circuit. 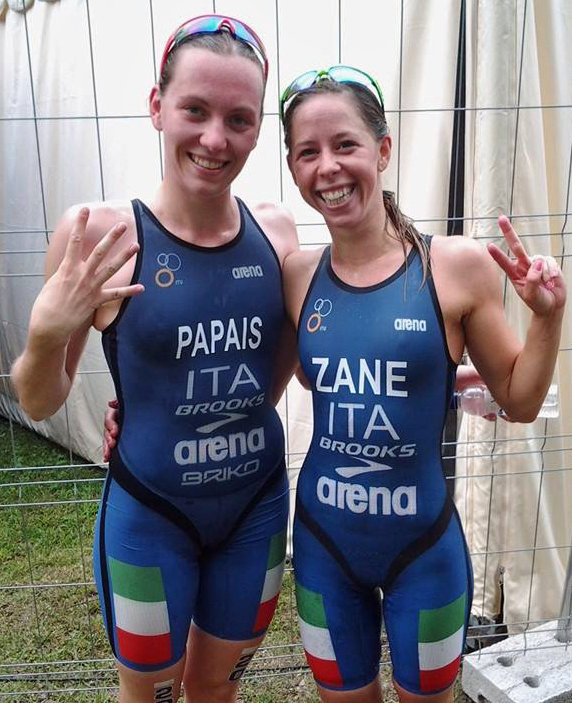 For Zane, “What can I say? A dream, a dream that seemed a dream right until the end.”

It was Kristensen who took us into the very heart of the emotion of this race, “5th at the U23 European Championships! The fact that I only a few days before doubted that I would be able to start, makes it a pretty good result! But to be honest, I really, really wanted that medal. And I was in the mix for most of the run! It was never really a fun day out there - struggled from the beginning, never had that extra 10% to give. Had a horrible swim, but tried hard to keep my head in the game and managed to make it to the front of the main pack within the first bike lap, chasing super-swimmer Lucy Hall out front. But only a few girls in the quite large group wanted to work and she increased her lead - very frustrating, and it ended up being a pretty tiring and tactical bike at the front of the group. That's the game, but that doesn't make 40 km roll around the lake with the possibility of victory slowly disappearing less frustrating, when that is what you are racing for. BUT I made it to the start after a turbulent lead up, I am healthy again and managed to pull off a sub-37 10 km run for the first time!! And as someone wise wrote the other day: we've come a long way and we have to remember that. I still have 3 years left in the U23 category - I WILL be back.”  She will be back and we look forward to seeing her race.

For the men, it came as little surprise to see the swim led by another British athlete, Marc Austin. As reigning silver medallist from Edmonton he had everything to prove in Banyoles and here he was, doing just that. Austin had five swimmers trailing him as he made the long run to T1but 15 seconds off his pace was David Castro Fajardo ESP and with the home crowds urging him on he would be the biggest challenge to Austin. The three Israelis, Shachar Sagiv, Itamas Alster and Ron Lewinsohn worked hard in the swim and then as expected worked just as hard in the group with Castro. Their efforts were to hit hard out on the run.

Coming into T2 a huge group set off onto the 10k run. At the end of the first lap it was Castro, Antonio Benito and Antonio Serrat Seoane to the delight of the Spanish supporters, were up there at the front with Austin and Delian Stateff ITA in the leading group of 7. 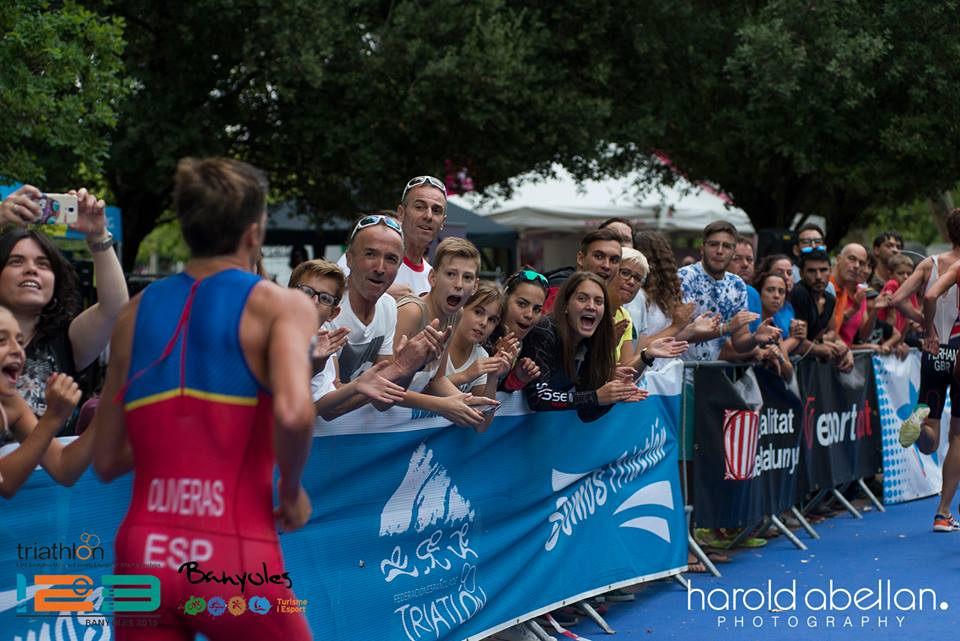 Out on the second lap it was Austin and Castro, battling neck and neck for the lead. The crowds went wild and their support was wildest for the Spanish athletes. 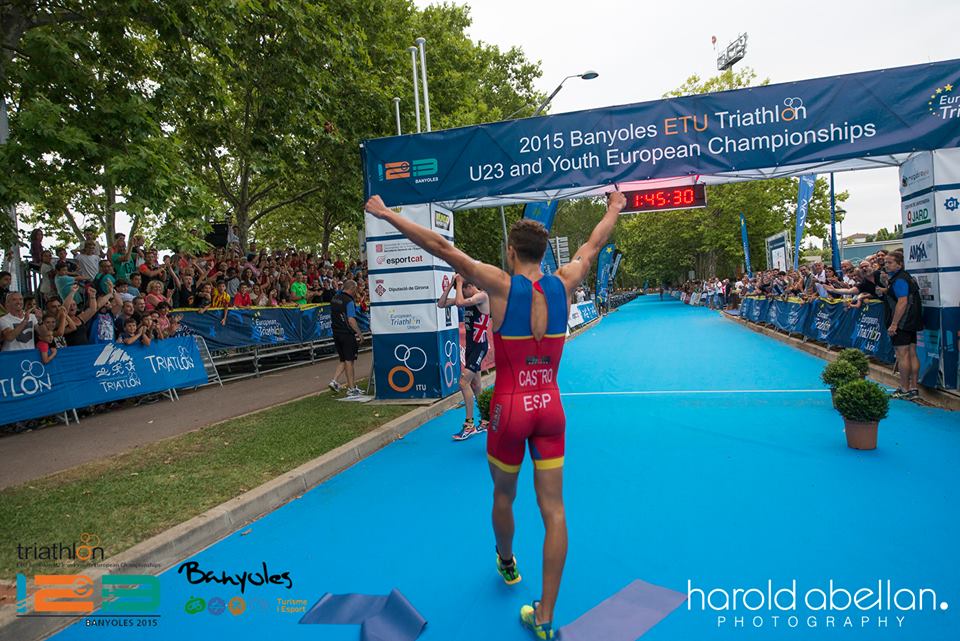 It was only at the very last moment, in an explosive acceleration, that Castro was able to shake off Austin to claim the U23 crown. Easing up with an assured bronze, it was Italy’s Stateff.

With the U23 events over, there was no real chance for the athletes to celebrate as the next day they had the relays.

Sunday saw the chance for the youth to race in their team relay format. This is a great way for coaches to see potential in their athletes and is used not only by ETU and ITU but also at the Youth Olympic Games. 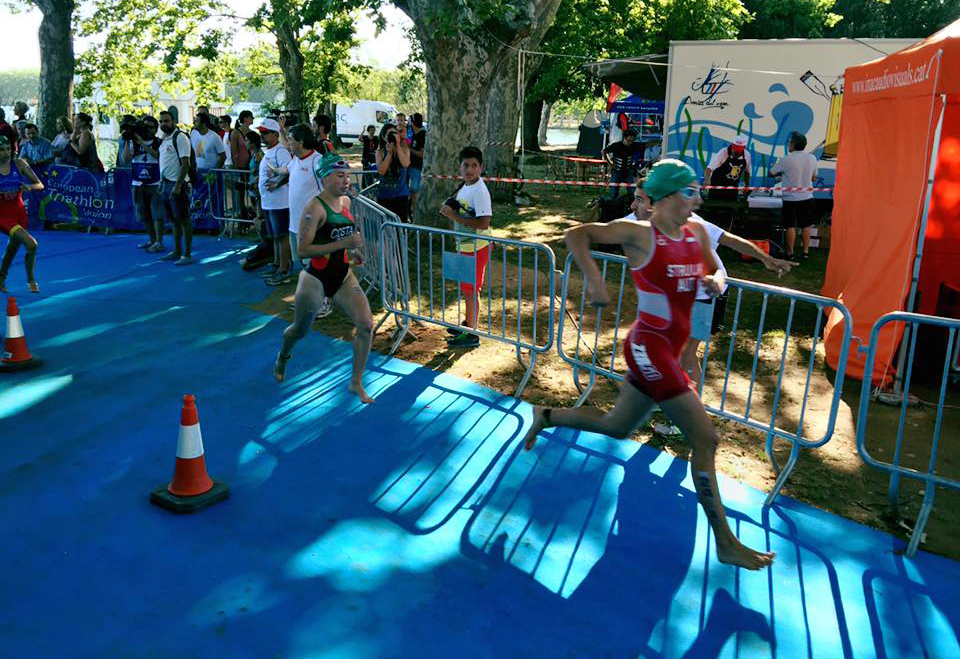 The first leg was dominated by Great Britain and Russia, with Austria, France and Spain some 30 seconds off the pace. 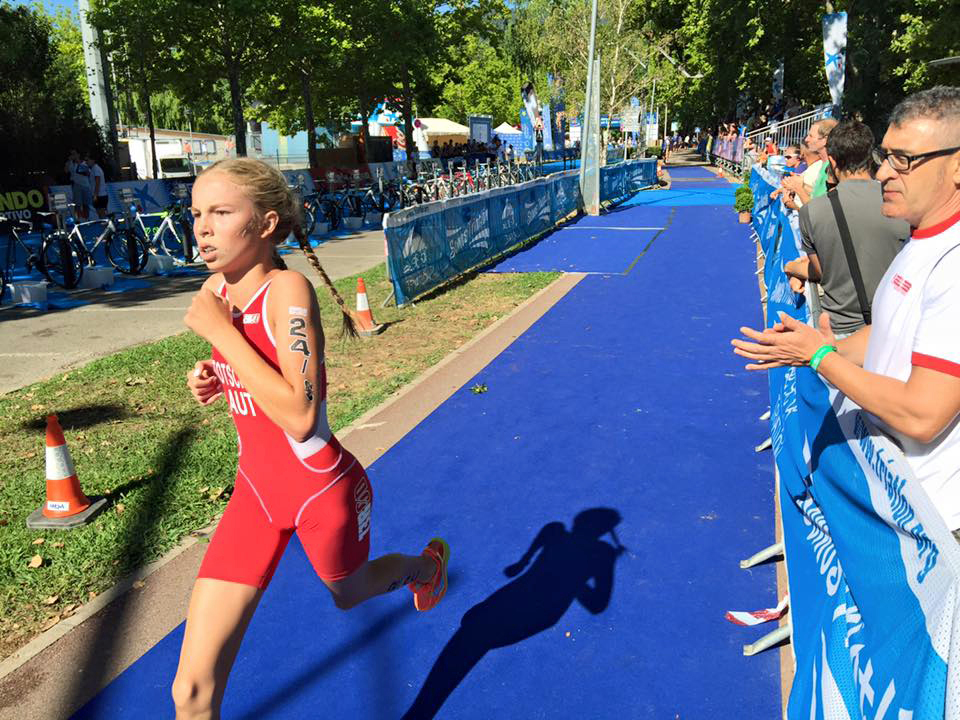 The handovers done and it was time for a change with Britain losing valuable seconds to France and Russia and also allowing Portugal to step up. 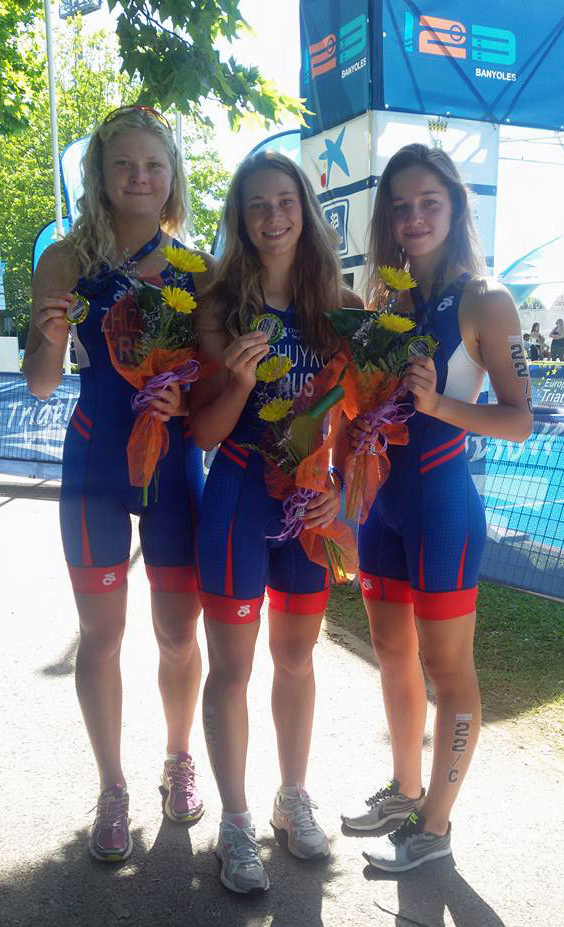 The final leg saw Russia tighten its grip on the gold with Team GB coming in second and a very happy French team in third.

The Youth Men’s race had 16 teams starting and the Spanish spectators had every hope that this race would give them medals. It would be Team GB that took gold with Spain and Portugal getting silver and bronze. 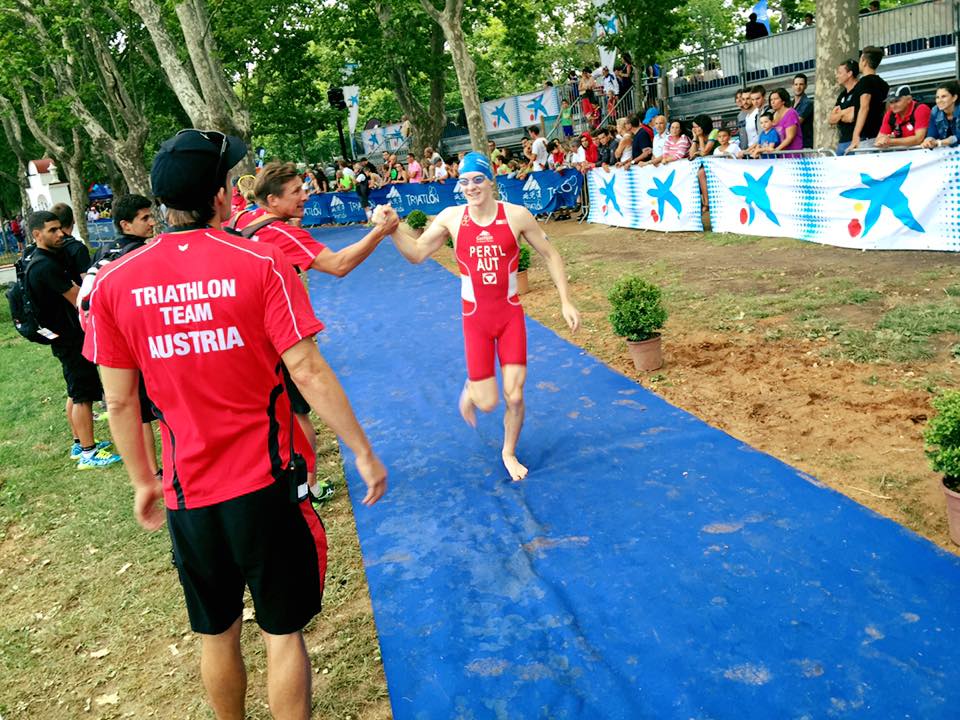 There was high drama for the Austrian Team when, after a fall in transition, Philip Pertl ran the 1.6k with a bad injury to his foot. The team placed ninth and afterwards Pertl was seen by the medics who took him to hospital where he had five stitches. We wish him a very speedy recovery. What a very brave man.

The U23 Mixed Team Relay was another chance for medals and perhaps to see how the younger French athletes could perform. 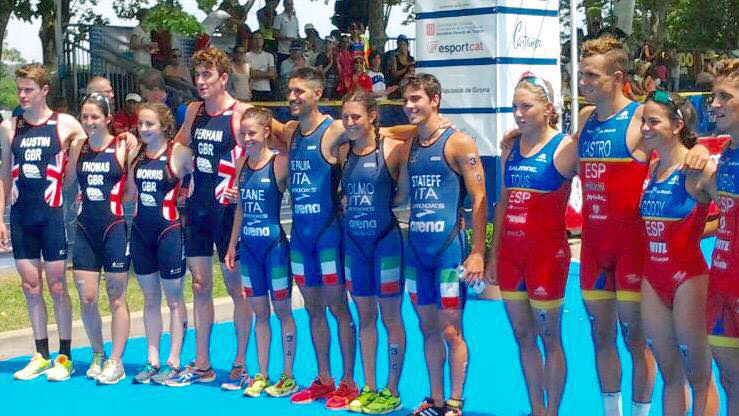 12 teams started but it was Italy who dominated. Great Britain claimed silver and Spain, to the audible delight of the crowds, got bronze.

We await photos and a check on the timings but the feedback from the athletes was very positive and ETU President, Renato Bertrandi, who was present for the weekend, was delighted with the way that the authorities in Banyoles embraced our sport. “Banyoles has given a very warm welcome to us. The town authorities provided us with closed roads and an ideal location. I would put Banyoles on a par with the great triathlon venues of Holten and Tiszaújváros. Over the two days we have seen athletes who will form a solid foundation for the future of our sport. The youth races were amazing and this format is clearly one that the athletes love and that the spectators appreciate. With the U23 races, I am really proud to see these athletes competing in their own European Championships as it is here that we can see their true potential. Triathlon looks good in Europe. Gracias Banyoles!”

For photos, we offer thanks to Federazione Italiana Triathlon, Österreichischer Triathlonverband (ÖTRV), Russian Triathlon Federation and to Harold Abellan Photographer

Results for the Youth Women

Results for the Youth Men

Results for the Mixed U23 Team Relay