A glorious day for Green and Vilaça at Coimbra 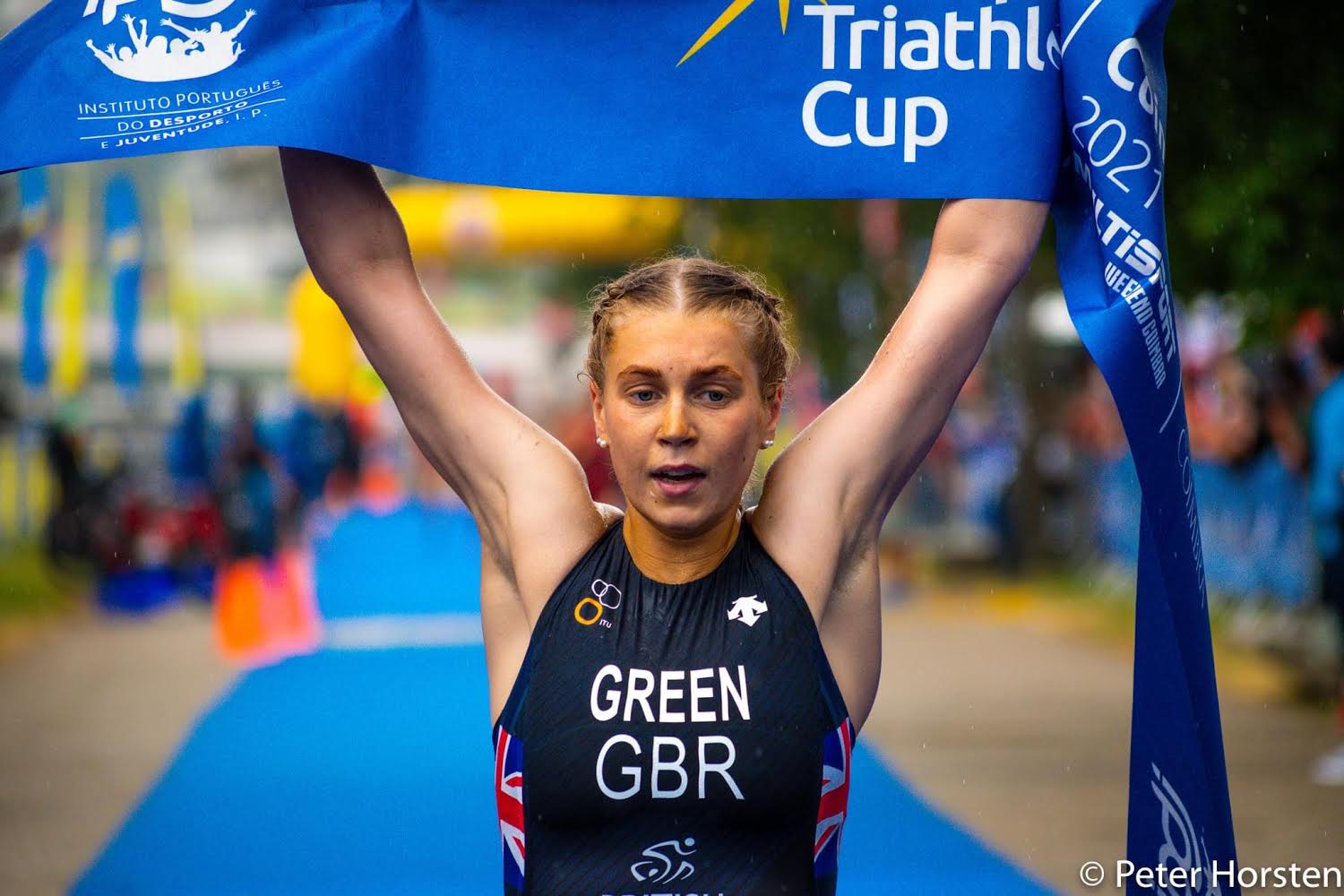 An unusual rain was the real protagonist of last Saturday’s élite race in Portugal. Everyone was expecting a wonderful Mediterranean sunny day in the beautiful Portuguese land. But was disappointed by a gloomy, stormy and pouring rain, which is quite uncommon in June. It contributed to a slippery  bike course, which was a challenge for all the participants. The bike, a 4-laps of 4,750 mt, had many bends and roundabouts which were the cause of some bike crashes. Even Helena Carvalho, leading the race, had to withdraw.

The Portuguese in second place, after the strong Italian Bianca Seregni who did a great swimming and led the pack and was the first to leave T1. But after the first bike lap when the chasing group reunited with them, because of a fall she left the competition. The leading pack of 15 athletes entered T2. It was soon visible that Green had an important pace together with fellow Elliot together with a number of Spanish and Portuguese athletes. Into the half way mark of the run it was Green (GBR), Cecilia Santamaria Surroca (ESP), Melanie Santos (POR) and Maria Tome (POR) making the break from the chasing pack and setting the pace for the finish. It was Green who crossed the blue carpet and Finish Arc in a time of 00:56:43. Cecilia Santamaria (ESP), a further 14 seconds behind took silver and Melanie Santos (POR) in third place in 00:56:59.
The British athlete Sophia Green is the new star of the European cups. The élite English athlete in three weeks has jumped from sixth at Olsztyn, Poland, to podium bronze at Dnipro, Ukraine to a Gold in Coimbra, Portugal, with her solid results Sophia is securing a qualification for the Birmingham 2022. 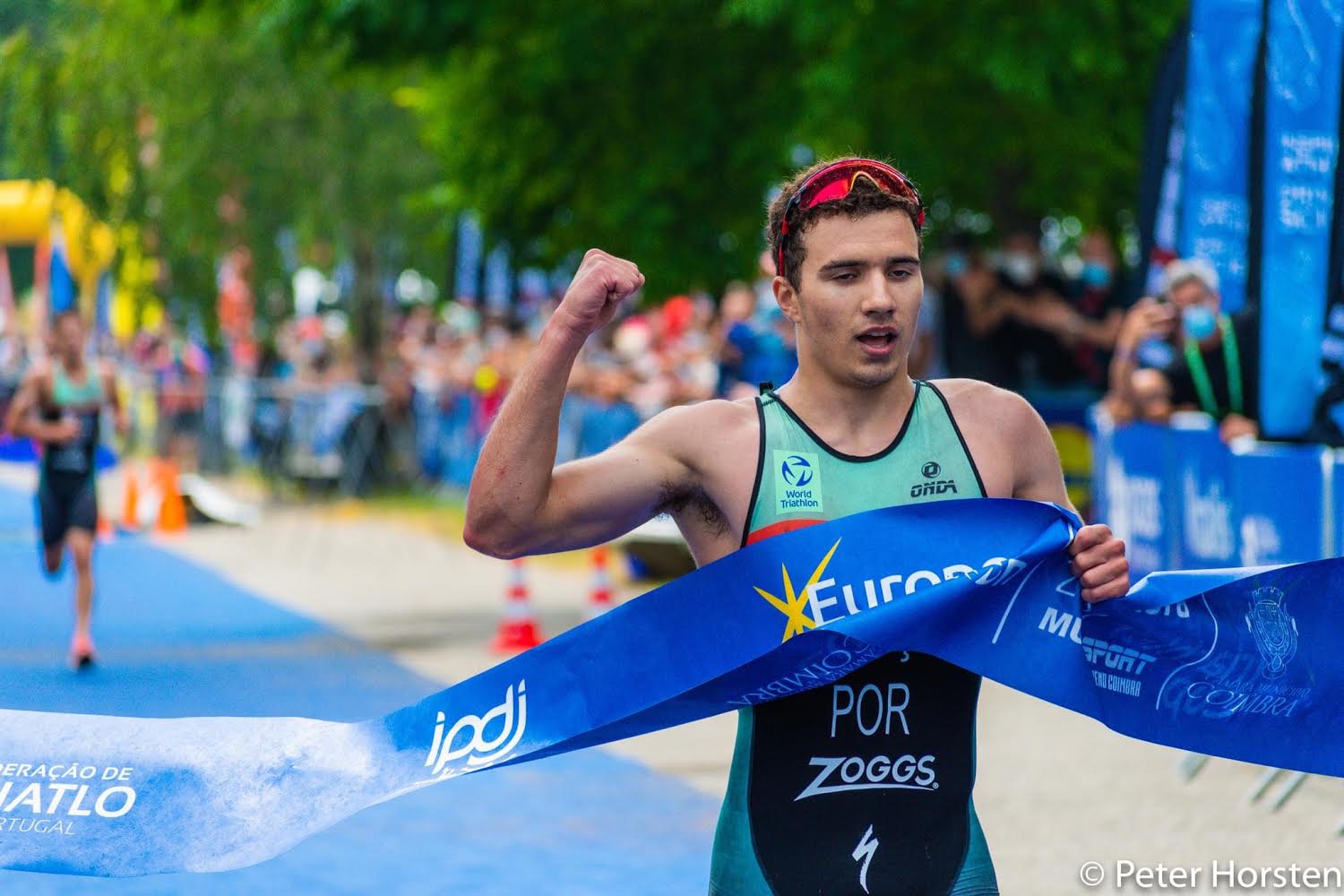 As for the men’s race a magnificent performance for the home athlete Vasco Vilaça who has made in two years a quantum leap becoming a world triathlon major personality. His victory in Coimbra is just the first step of a great series of future results for the Portuguese who will be going in a month to Tokyo for the Olympics. He participated inLeeds last weekend at came 27th but still has a lot to improve and for sure another triathlon celebrity is born.
In Coimbra he was in front since the beginning of the swimming. After T1a leading pack formed in which together with fellow Junior World Champion Ricardo Batista and Miguel Tiago Silva maintained the gap from the chasing main group that permitted the perfect T2 transition. At the end Batista (POR) and Christophe De Keyser (BEL) had to surrender to the strong pace set by Vilaça  who crossed the Blue Arc in 00:50:44 in second place after 7 seconds Ricardo Batista in 00:50:50 and in third De Keyser in 00:51:02.
A Gold rain crowned Vilaça for his first seasonal victory which will make us hope for superb future performances for this young, European, talented athlete.