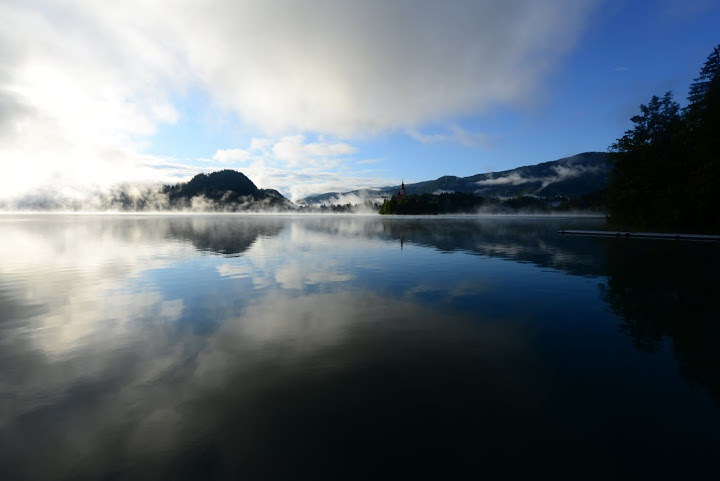 The views across Lake Bled are truly magnificent and this weekend it was the chance of a group of young Europeans to race a super-fast, super-short sprint triathlon as part of the ETU Triathlon Junior European Cup Series. We saw a big start list for both Women and Men and with the short distances and tough nature of the course; the organisers were able to set the men off first with the women entering the water only 5 mins later. This is quite exceptional as generally ETU and ITU imposes a clear separation between the waves but here the LOC and the ETU Technical Delegate, Jane Vine, were able to see that there would be no cross-over. 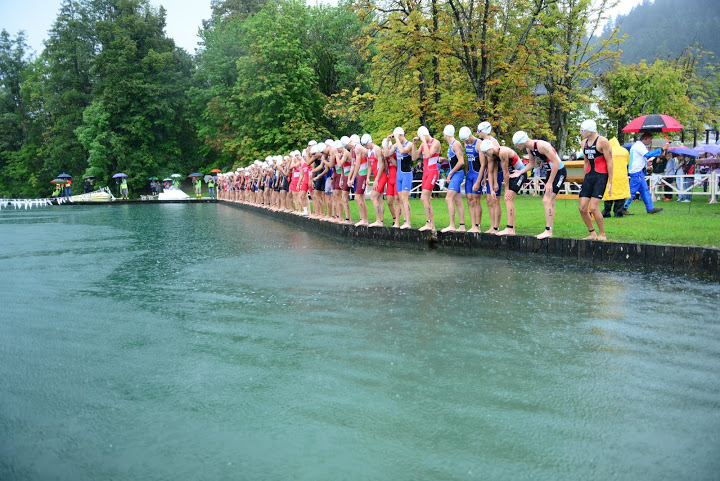 So the men headed to the water front, jumped into the warm waters and moved to their deep-water start position. The LOC had sensibly decided to have a deep-water start as this gave the athletes much more space at the start. 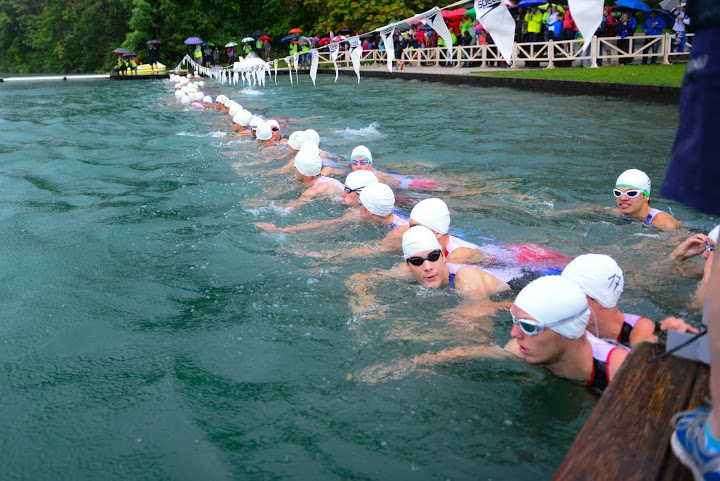 With 70 athletes racing over this very short course, the first turn buoy was only 175m away. Luckily the various skills, strengths and abilities of the athletes removed any danger of that “washing machine” machine that terrifies people at the turns. 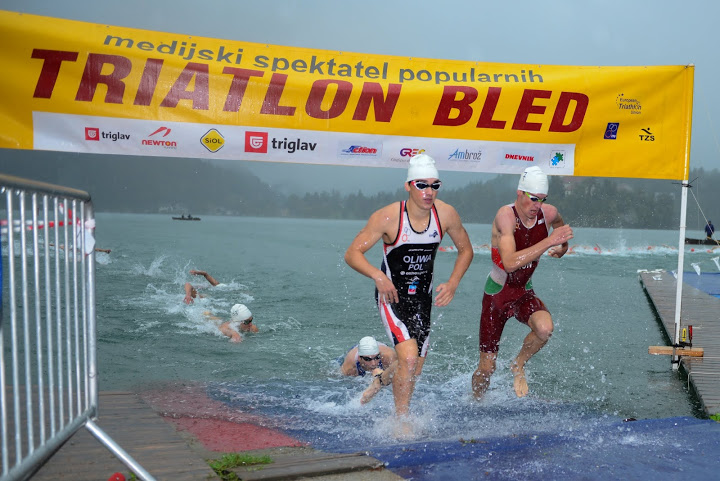 Soon, out onto the run to T1 it was Hungary’s Márk Dévay who has led all but one of the swims in this year’s ETU Circuit who stamped his mark on the race. Shoulder to shoulder at the swim exit, was Poland’s Michał Oliwa who has led in the water every time he has raced this year. So in this one race were the two strongest young swimmers on the ETU Triathlon circuit. When you see consistent performances like this you know that European triathlon is going well.

With 12 athletes rushing into T1 and then a 5 second gap to the next group, it was “attention at full focus” for the Technical Officials in the Transition Area. Within this leading group would be the medal winners but they had first to negotiate a very tough bike course that would ultimately keep any attempts of individual attacks at bay. It is not often that you hear a Race Referee say, “tough? Oh yes, that was one of the toughest bikes courses”.  With a 600m climb on each lap it was going to be a strong cyclist who would benefit. A group of three led into T2.

The run was relatively simple after the immensely tough bike but still, 3.3k is enough for the positions to change. It was the Swedish athlete Sandör who led Planko and Dévay. They had all spotted that ETU Junior Champion, Lasse Lührs GER. Was way off the pace but between them, who would take gold, silver and bronze?

A kick from Sandör put him in to the lead with gold going to a very happy Swedish athlete in his first international win. His position in the Junior World Championships in Chicago is secured.  Silver went to Dévay who was just 5 seconds behind and to the delight of his father, one of the Slovenian Technical Officials, it was Planko who got bronze.

After the race Sandör complimented the location but bemoaned the awful weather, “Beautiful city of Bled in Slovenia did not offer his best weather. Wet roads and rain, but I was psyched and knew I was in good form. 22.5 degrees in Lake Bled made it a non-wetsuit swim, which was good for me in most races so far. It was a tough swim start with 75 juniors together. But I was smart and chose a place next to three Hungarians who I knew were fast swimmers. When the race went, I tried to get away well and was in relatively empty water behind the rapid Hungarians. Up out of the water I saw that I was tenth with some strong riders in front. I pushed hard on the first section to be able to get safely in the first group. At the first turning point saw that the European Junior Champion, Lasse Lührs was further back so I tried to be very active and keep the speed in the peloton. The bike course was very technical and hilly with a 600 m long hill on each lap. Out on the last lap I made a break on the hill and with two others we pushed and made a gap of about 20 seconds on the main peloton before we got to T2. Out of the run and my legs felt very good. I was with Mark Dévay but at about halfway I kicked and was able to hold the lead all the way to the finish!”

For this young Swedish athlete the moment was a very important one, “This is my first international win and the first time I was told the Swedish national anthem on the podium. With this race, I’m now ranked as the 3rd best junior in Europe! The next race is the JVM in Chicago for less than 2 weeks. I am really looking forward to!” 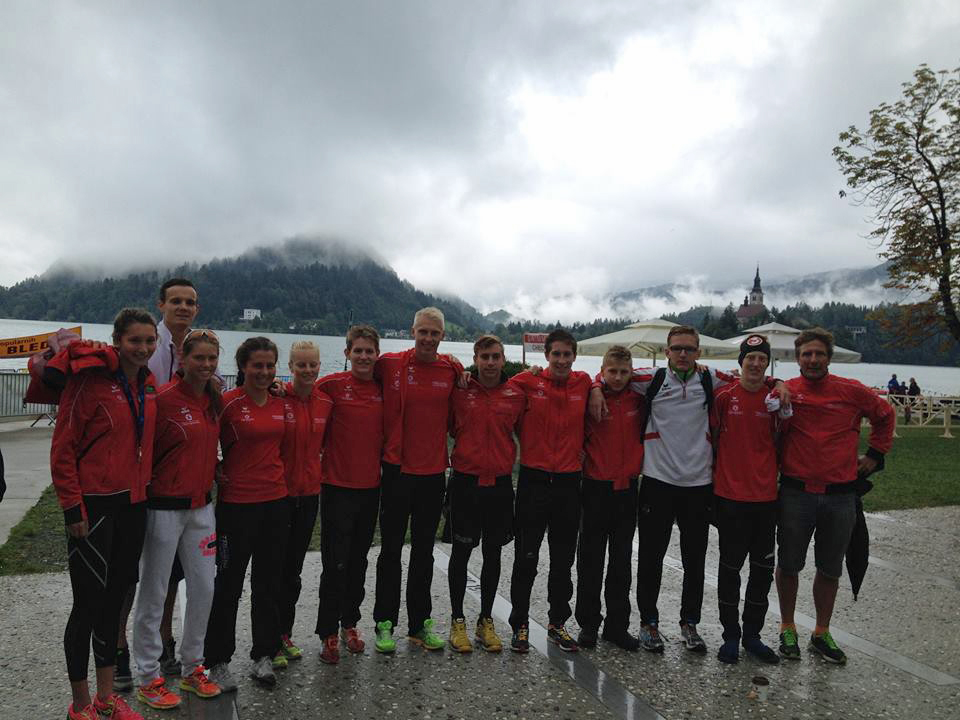 The results show clearly that the hard work from the various Federation Coaches is paying off.  Austria took a big team to this event and was rewarded with solid performances from the Junior Men. No medals were won by the men but the Österreichischer Triathlonverband (ÖTRV) were pleased with the performances.  Their President, Walter Zettinig, “Heute konnte ich mich persönlich beim TRI EC in Bled davon überzeugen dass unser Nachwuchs mit unserem Trainerteam sehr erfolgreich ist. Herzliche Gratulation an alle Team/Athleten zu den heutigen Leistungen.” “Today, with our training team, I was able to see first-hand, at the European Cup in Bled, that our development squad is showing success. Hearty congratulations to the whole team for your performance today.”

It would be the women’s race that would bring delight to the Slovenian neighbours. 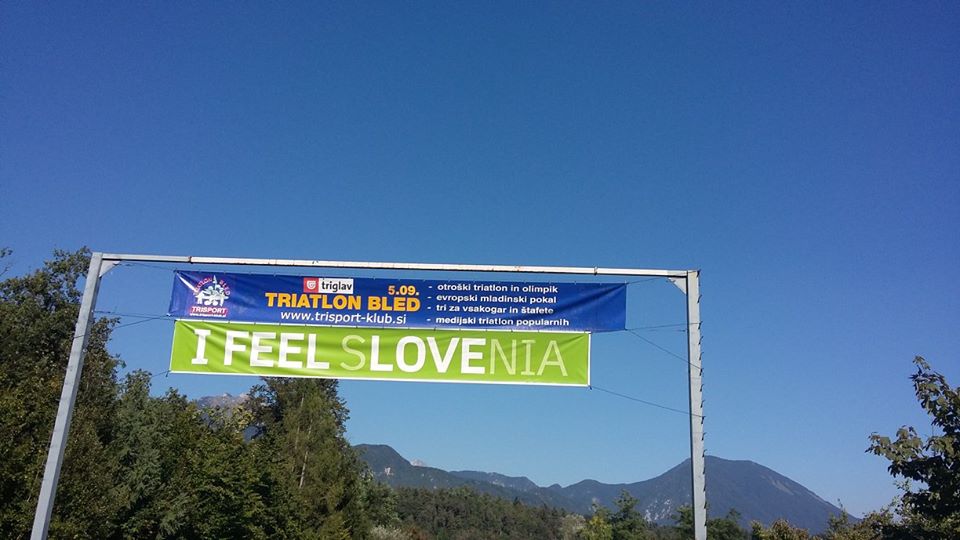 ETU spoke to Race Referee, Howard Vine, after the race. He confirmed that it was very unusual to have two races start so close to each other but the careful calculations from the LOC had shown that it was possible. The women started only 5 minutes after the men. The Technical Officials successfully got the women to the pontoon then into the water and into position for their deep water start. The men had all passed through T1 by the time that the leading women entered transition and all along the course the women had a clean race. The hard work of the LOC in preparing such a tough bike course had ensured the safe and fair race for both men and women.

Howard explained that the weather conditions were really bad but that the rain was not accompanied by any electrical storms and that between the heavy showers it was quite warm. There was no wind and the athletes really did race well and raced to the weather conditions.  For a small organising team, TK TRISPORT KAMNIK, led by Miro Kregar a good event was provided. 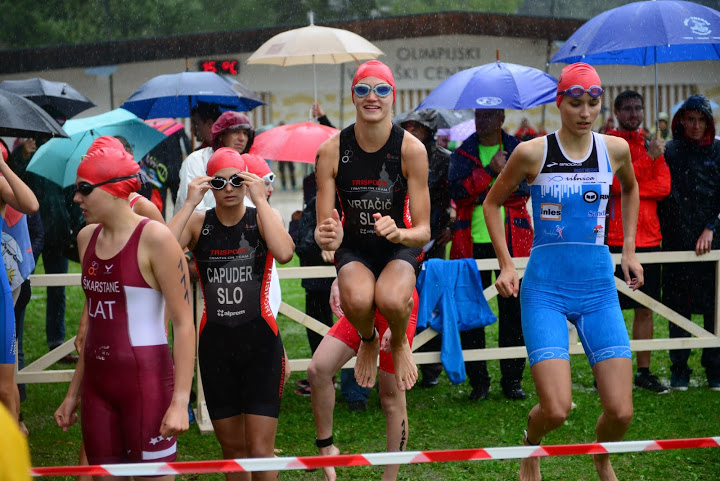 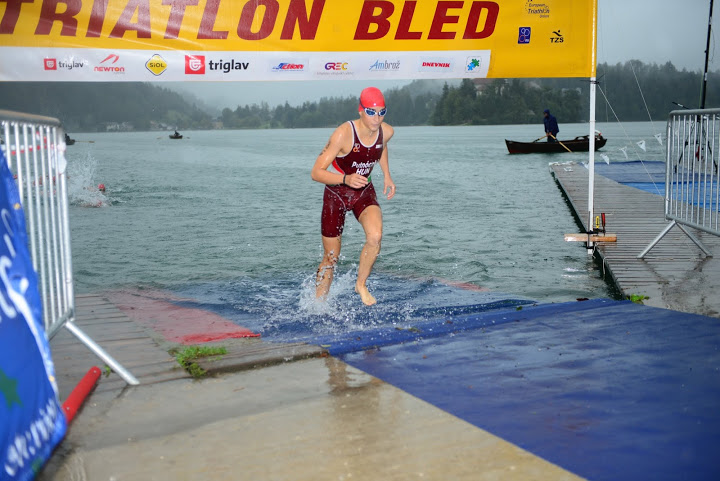 Something is going well in Hungary because again it was a Hungarian athlete who led the swim. It was Dorka Putnóczki. She too has dominated swims in her international events. A six second lead after such a short swim took her comfortably into T1. 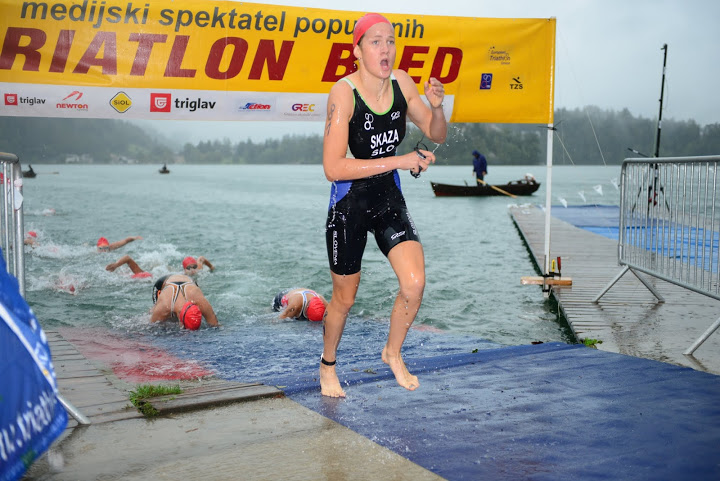 Behind her and to the delight of the local supporters came Eva Skaza SLO. 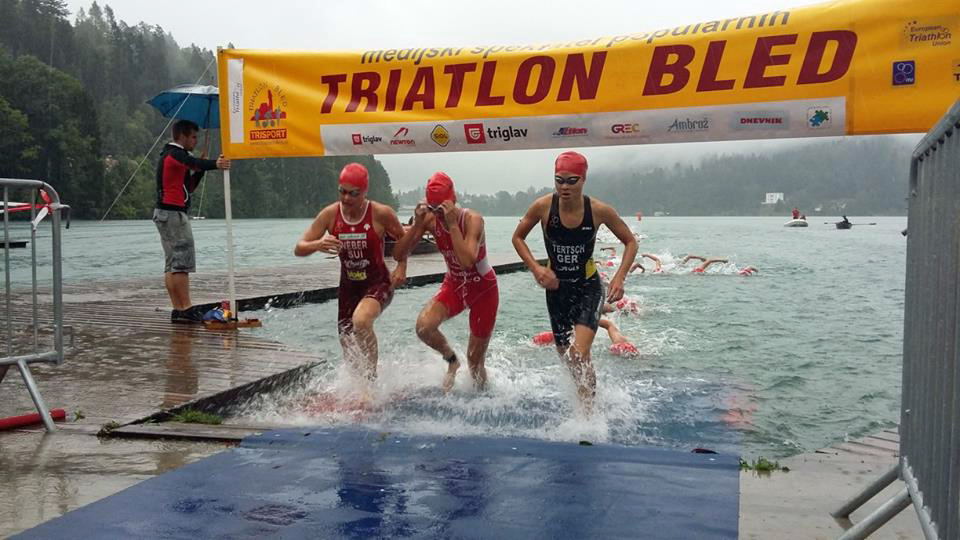 Then came Iveta Fairaislová CZE and Germany’s Lisa Tertsch on the shoulder of Therese Feuersinger AUT in the same group. She was supported by other Austrian athletes with Anne Struijk and by the time they got to T2 after a very cautious ride it was Feuersinger just in front of Struijk and Tertsch behind. 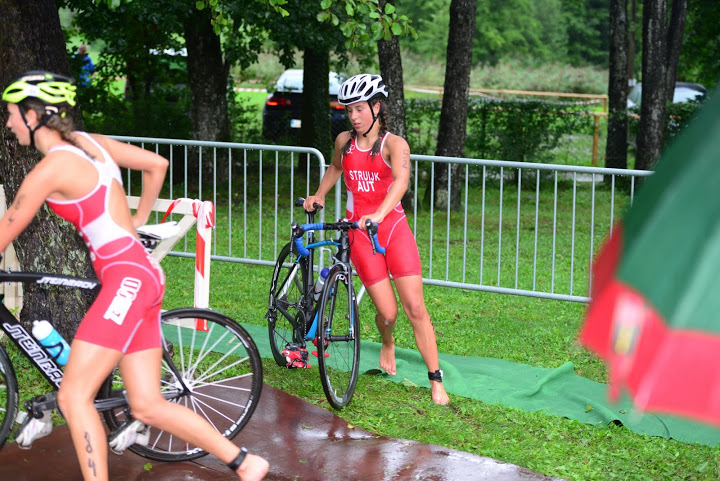 Skaza led Beatrice Weiss AUT off the bike and then they set off onto the run. 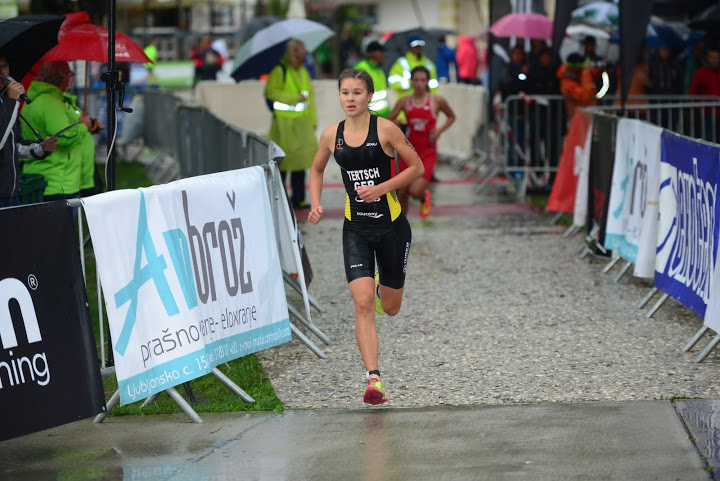 It was Tertsch who led out Struijk and Feuersinger with Skaza behind but nobody could cope with Tertsch’s run pace and with the fastest run of the day she pulled ahead to take gold comfortably. Skaza’s run time was second fastest and was enough to give her silver; to the delight of the local crowds for whom two medals in one day was a really good result. Bronze went to Austria’s Feuersinger who had done enough on the swim and bike sections to secure her medal.

Despite the appalling weather conditions we managed to get a few photos.

Many thanks to Österreichischer Triathlonverband (ÖTRV) for their photos.
Extra special thanks to TK TRISPORT KAMNIK for the event photos

Lake Bled – certainly a stunning location. So nice to see this race back on the schedule. So nice too, to see the Juniors following the rankings so closely. 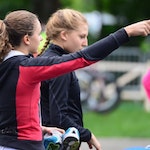 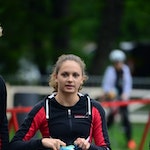 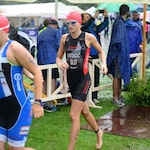 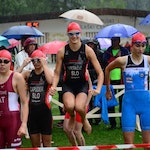 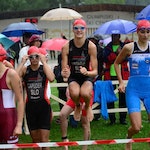 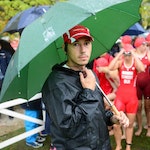 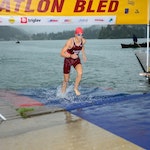 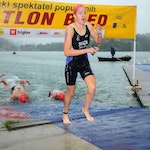 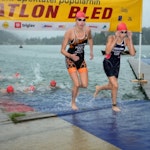 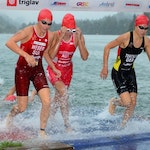 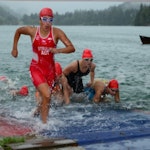 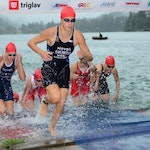