Strong winds hit the Eastern coast of Romania last weekend and with huge waves the organizers decided that in the interests of safety they would re-locate the swim to the lake behind the promenade. Not often is a venue so lucky. The only other one that springs to mind is Mooloolaba where the LOC has the chance to move inland when the sea is too rough. So the LOC quickly changed the swim around. All the athletes and their managers and trainers were informed and the race was ready.

In the women’s race 25 athletes from 13 nations jumped into the lake and made their way around to the slightly shallow start. No jumping from pontoon this time but a rather nostalgic “hands against the pontoon”. 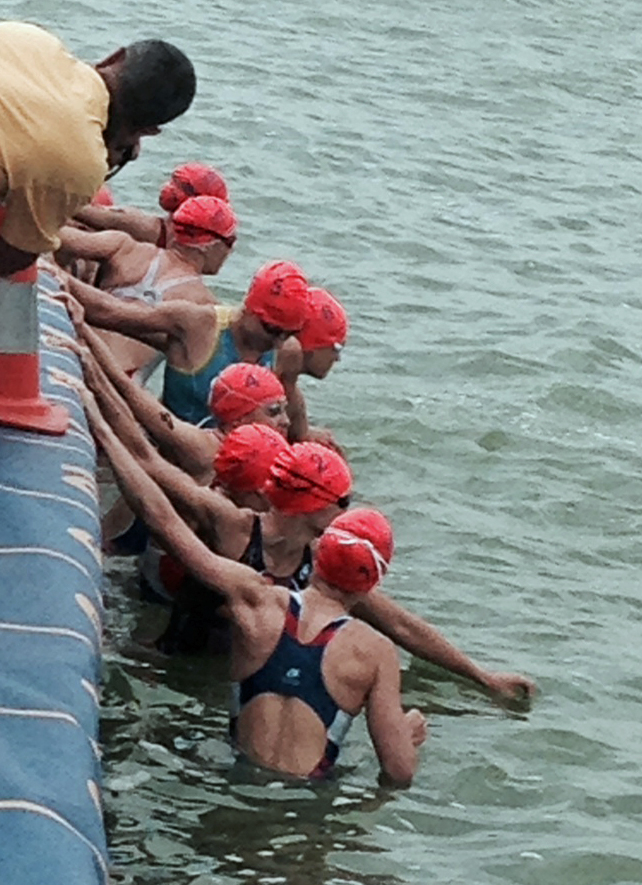 As predicted the powerful swimming of Belarus athlete Angelina Borodina took her to the very front of the swim.  On her heels was Anastasia Abrosimova (RUS), wearing number 1. Behind her was Alessia Orla (ITA) and Liubov Polyanskaya (RUS).  Elena Danilova (RUS), wearing number 2 was a shade behind her but comfortably in front of Mikaela Persson (SWE) and Ilaria Zane (ITA). The usually strong swimming from Inna Ryzhykh (UKR) was a little off pace. Her compatriot, Yulia Yelistratova, was in 13th place. She later said, “The swim went not the perfect way for me. Some really strong swimmers have been participated, and I couldn't make the first pack.”  For Danilova, “I was not worried before the start. The swim went well, unusually for me and 5 girls were in the first group.” 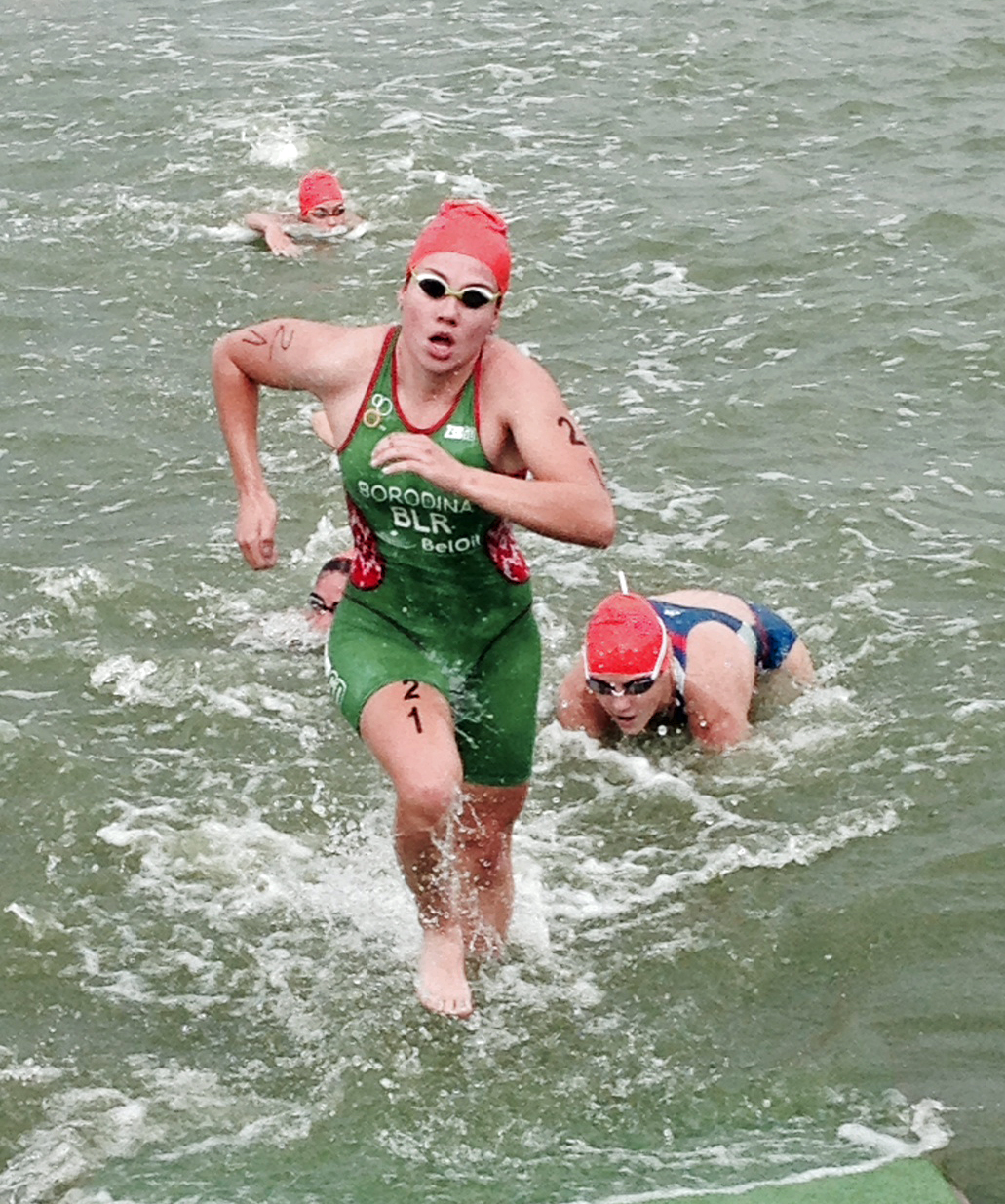 It was Abrosimova who led them out of T1 with Borodina and Orla close behind.

Out onto the bike course and with a gusty wind it was going to be hard work one way and a strong tailwind on the other. Yelistratova, in the chase group, finally made the bridge to the leaders. In that lead group only Danilova and Polyanskaya tried to break and it was the failure of the leaders to work together that allowed Yelistratova’s group to catch up. Despite the jetlag that was hitting the top-ranked athletes and in Yelistratova’s case jetlag mixed with a 1,000km drive from her home to the race, she was nevertheless pushing towards the red on the bike in preparation for a strong run, “On the final laps I've tried few times to break away, but still we came to T2 in one big group.”  It was Kseniia  Levkovska (AZE) who led them back to T2 and it would be from this lead group on 9 that the podium would be fought for. That group held Yelistratova, Danilova, Abrosimova, Polyanskaya. Who would be less shattered from the global travel? Who had recovered best? 10k of running in the wind would decide that! 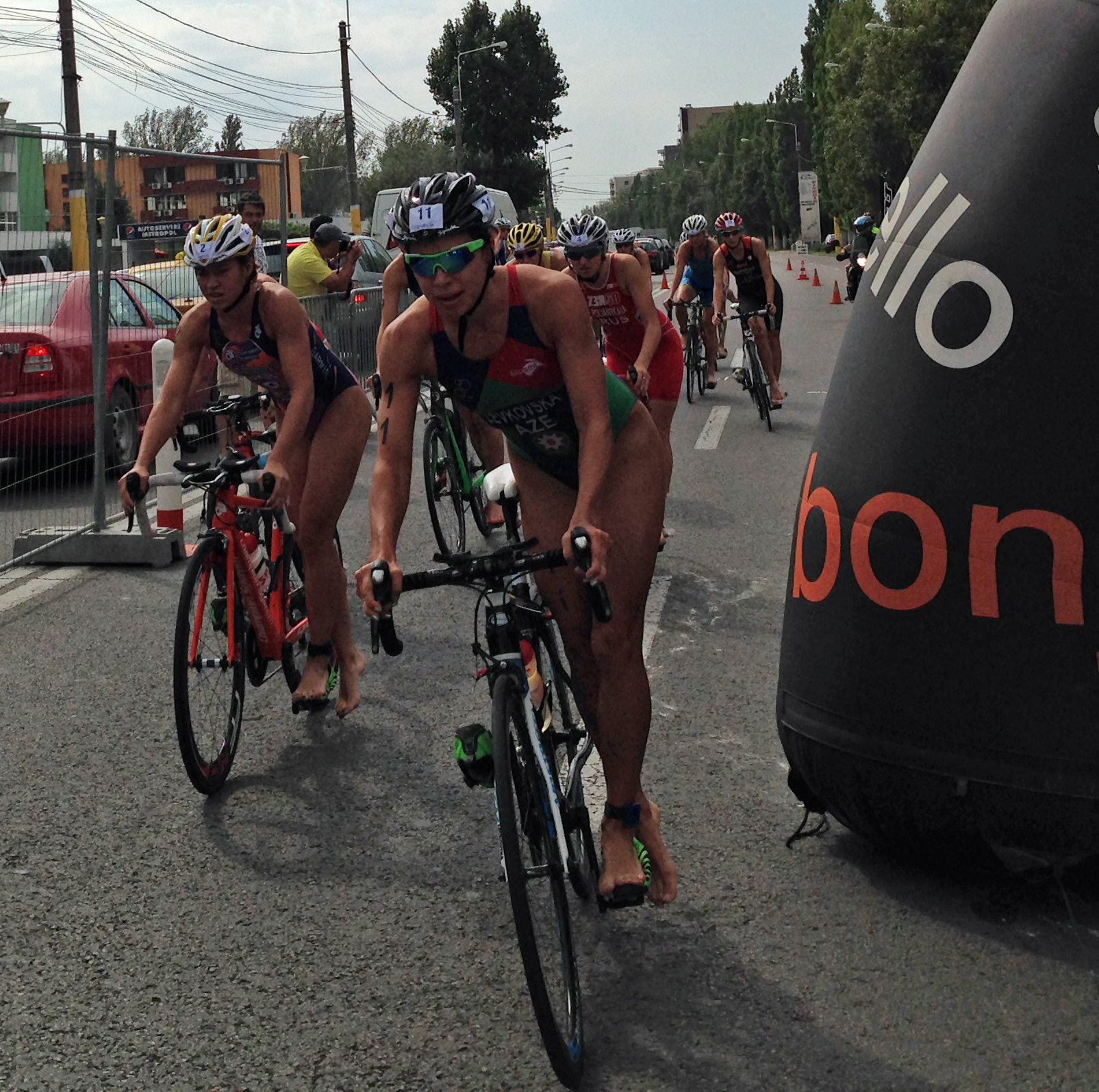 After the first lap of four it was Russia and Ukraine in the lead. Danilova and Yelistratova were to test each other. For Danilova, the “running went well, but it was hard.” She was unable to keep up the pace against Yelistratova, whose coach (Igor Sysoev) had planned her training process well. “It was not big surprise for me that I felt good on the run even after the not so easy bike.” Yelistratova ran a tactical first part of the 10k. “One half of the first lap I stayed ‘in the shadow’ of the Russian girls. But I really wanted that win and didn't plan to leave it to the sprint finish to ensure I get it. That's why I had to push the pace higher immediately after the first U-turn. I'm very glad that Elena Danilova liked that idea. We worked side by side for nearly entire run, helping each other to run with the head wind and increasing the speed with the tail wind. Just before the beginning of the final lap a small gap between two of us appeared. After that I had to run really hard. I'm glad that it got me the gold.” 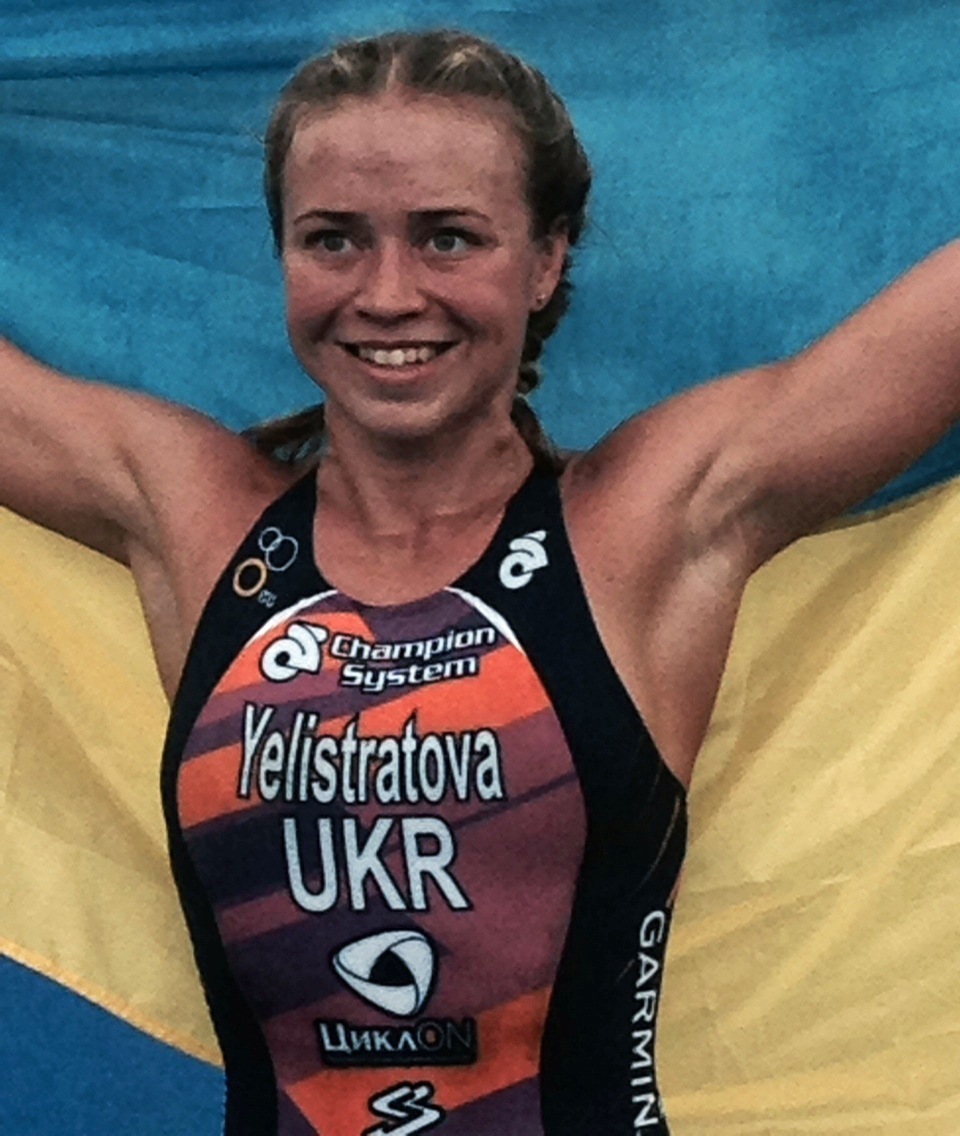 Danilova came home 26 seconds later, having secured the silver. Bronze went to Abrosimova.  She was later to explain that “the jetlag after Canada made itself felt on the bike.”  She plans to return to Mamaia, happy with the organisation. For Yelistratova it was a sweet victory as she was accompanied by her mother who has supported her so much during her triathlon career.  “I'm very glad that my mother came with me for the race. I always felt her support while traveling, staying in Mamaia and of course cheering during the race. It gave me some additional energy and motivation. Last year she came to Tartu Europan Cup and I also finished first. So maybe she also brings some good luck with her.” 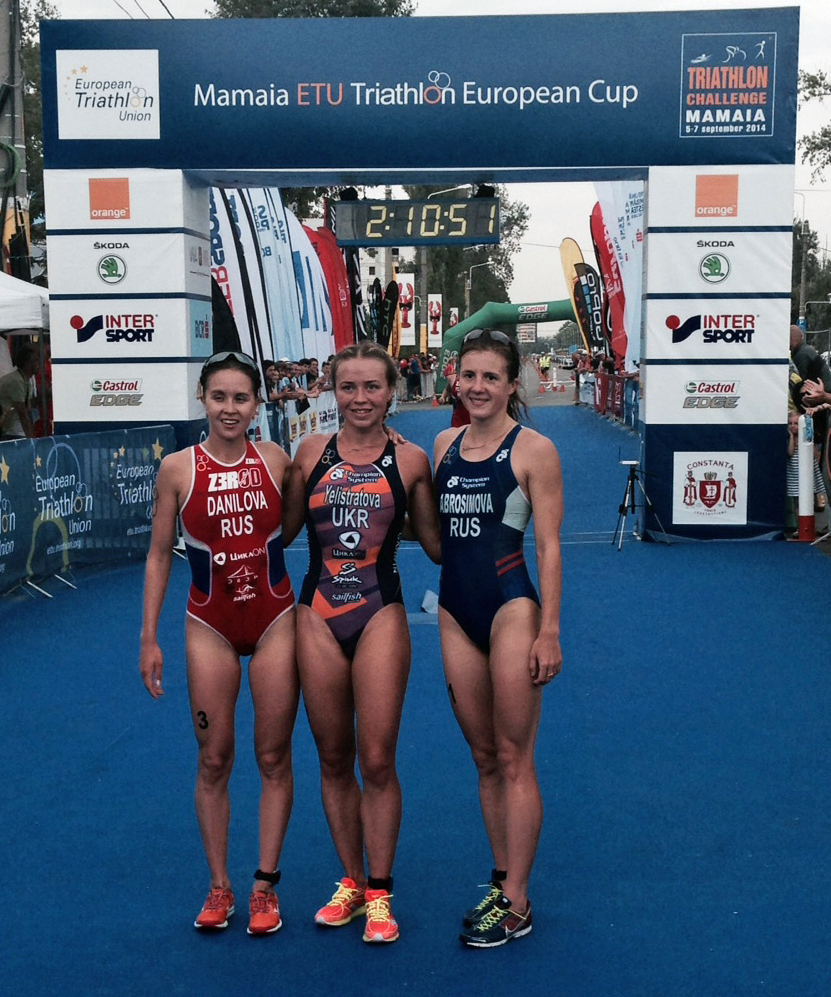 It was a hard day at the office for them all with so much racing and travel in their legs but the extra points won here will help Yelistratova on the ETU Rankings table. Polyanskaya moves up to third place behind Petra Kurikova (CZE), knocking Alexandra Cassan Ferrier (FRA) down to 4th. With a take home purse of €3,125 for the winner, this could be a good pay-out at the end of the season.


The men’s race saw 51 athletes line up. Some had spent hours and hours in the air and just like the women, were carrying varying degrees of jetlag. Others, having missed Edmonton, were wondering just how their chances might be at this race. The Russian team; strong with Dmitry Polyanskiy and the Bryukhankov brothers, had flown from Edmonton. Would have a battle with Pedro Palma from Portugal who had not raced Edmonton and who had previously shown pace with a gold in Kyiv and just missing the podium with a 4th in the Istanbul sprint.

The swim was a fight between Polyanskiy (RUS) and the Kiwi Aaron Barclay. They exited the water side by side, leading four other athletes; Alexander Broberg Skeltved (NOR), Alexander Bryukhankov (RUS), Pedro Mendes (POR) and Jan Volar (CZE). Barclay, lost his swimcap in the rough and tumble of the swim but as an ex-swimmer who “got bored of swimming and wanted a challenge.” With a PB of 17 mins flat for 1500 he would be a good target for the experienced Russians. Mendes later said, “I really liked the city, I had never been in one that has the sea on one side and a lake in the other. I just wanted to do the swim in the sea, but I know that was not possible and I understand it. For me the swim was perfect because I came out the water in the front group of six athletes.” 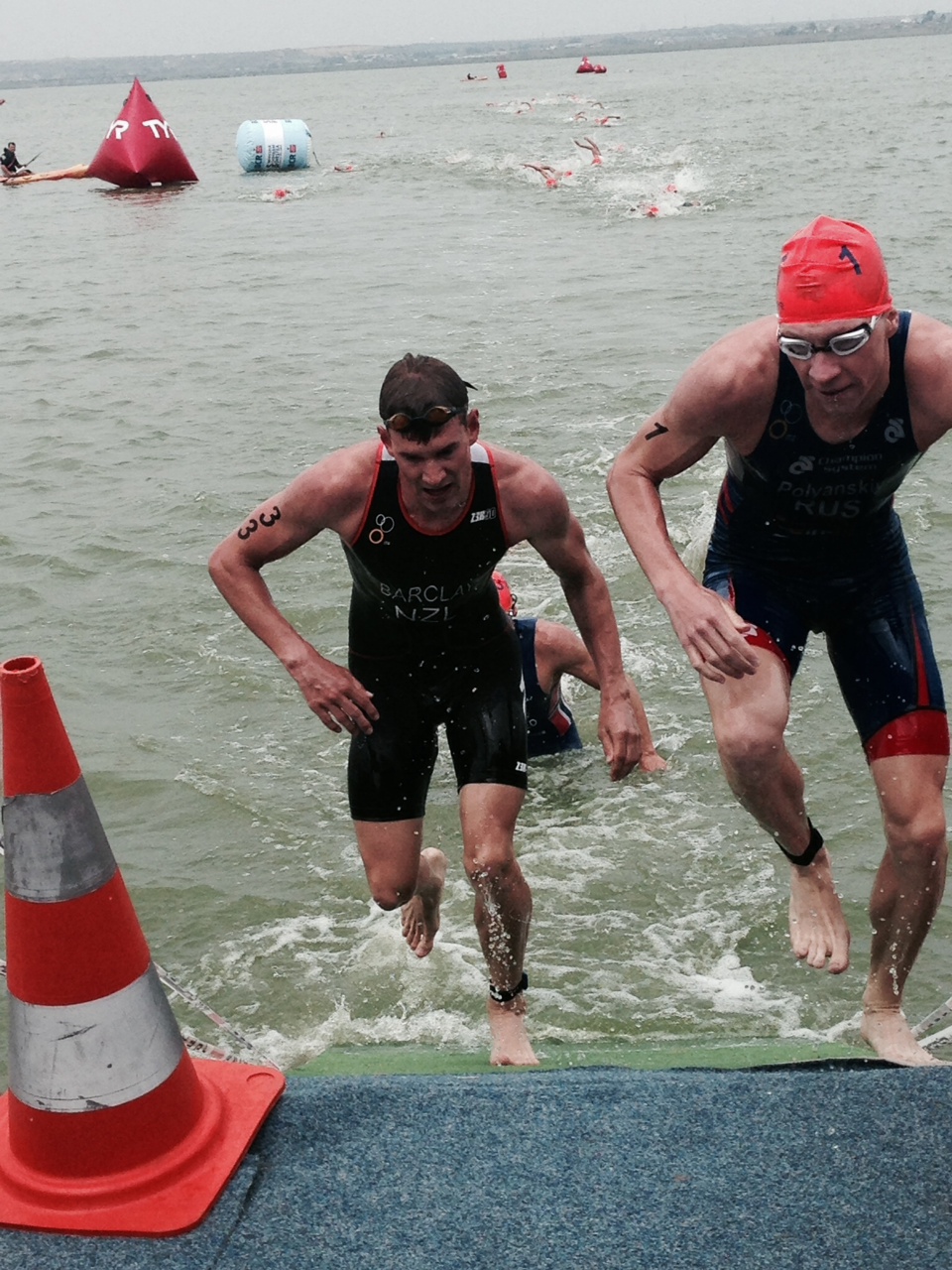 It was Barclay who led the six out onto the bike. 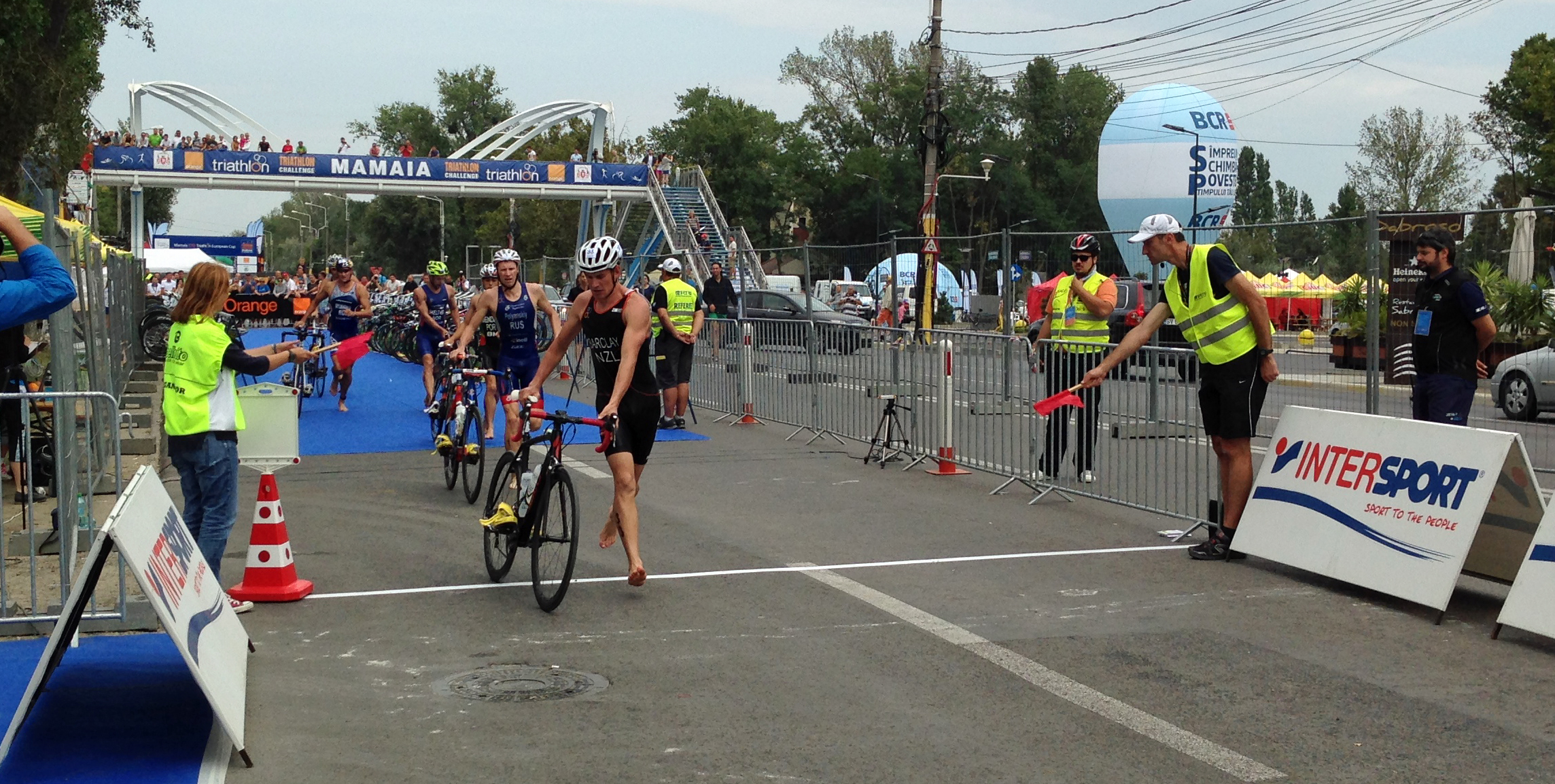 Mendes reported that “the first laps of the bike were hard but after that I could work with the other athletes to increase the gap to the other groups”.  Polyanskiy added, “Fortunately there was a group of 6 people and we worked smoothly and not only maintained but also increased the gap between us and the chase group.” These six pulled away with a fine display of chain-gang riding and established a significant lead over the chase pack. It would be within this group that the medals would be shared.

Fast transitions saw Alexander Bryukhankov leave T2 first. He knew just how much it would hurt out on the pan-flat 10k and he knew how hard he would have to work to keep ahead of his rivals. Hot on his heels were Polyanskiy and Mendes but on the day it was Polyanskiy who had the greater determination and pace. “In Romania, my legs felt even better than in Canada. I liked the race, the course was really very easy. For me now it is important, since I was very tired after a hard and challenging racing WCS.” His 31:06 was simply too much for Bryukhankov whose 31:25 was still enough to secure a comfortable silver. Mendes held on “On the run I just kept my pace. I knew I had the third place secured.  I was really happy when I crossed the finish line on third place. The spectators were very nice too, because they cheered us on a lot!” 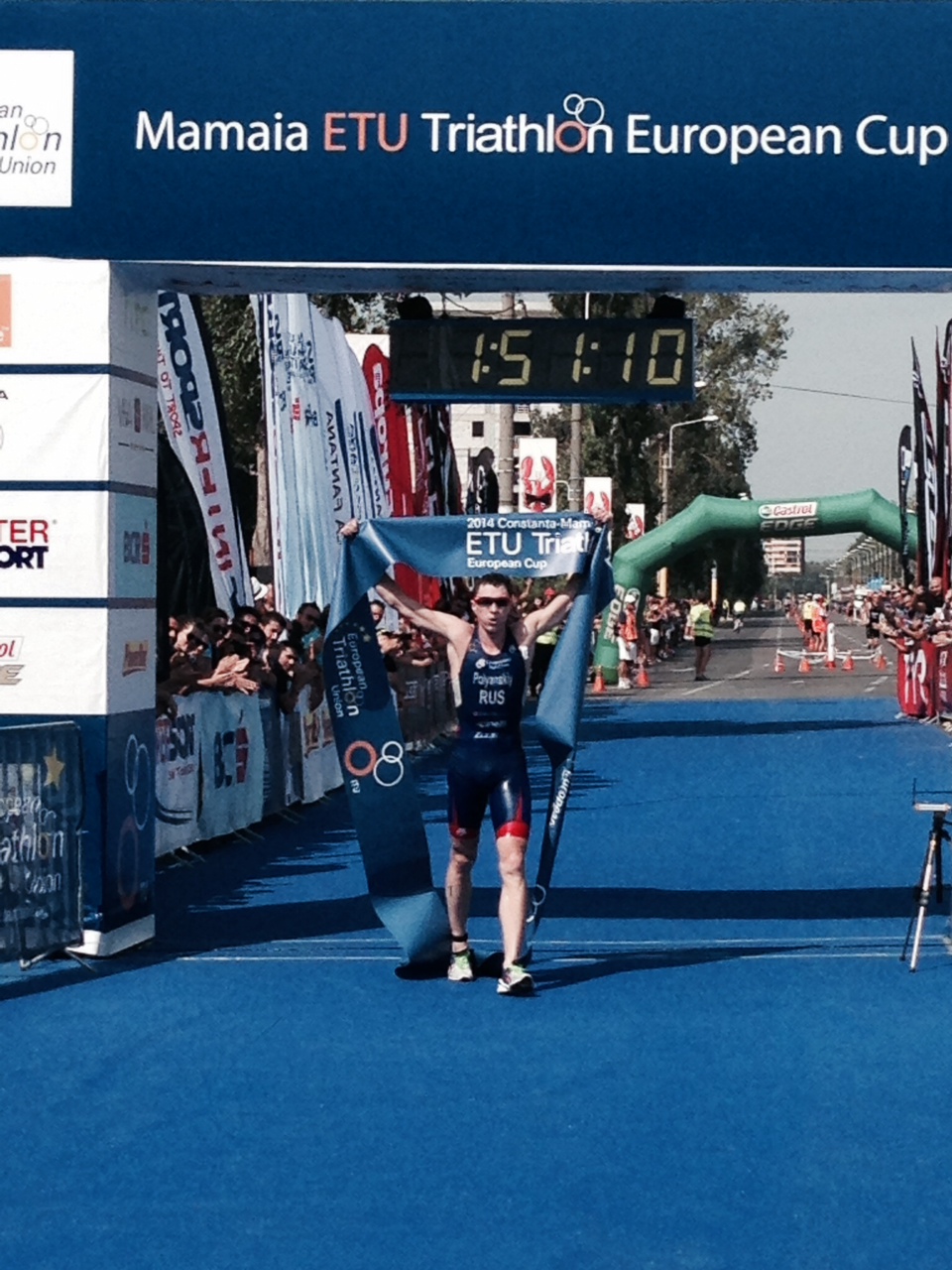 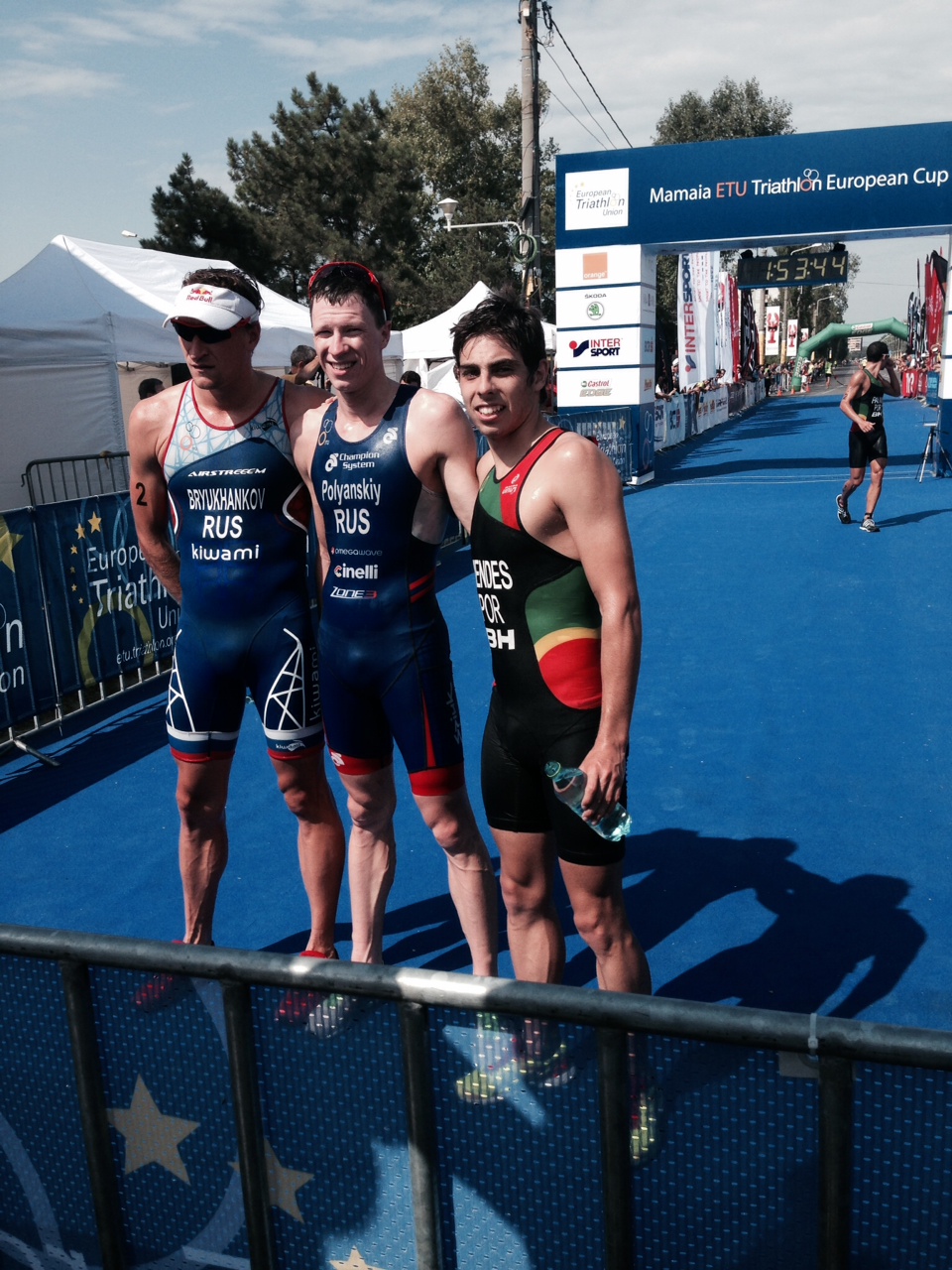 The extra points won by Polyanskiy puts him in a strong position in the ETU Rankings. His lead is now 267 with Tutukin (RUS) behind him in second. Alexander Bryukhankov moves up three places to hold a small lead over his younger brother Andrey. With the final of the ETU Ranking series in Madrid, which the athletes must race to complete their ranking battle, this will be a great event with a big prize-money payout.

So, Mamaia-Constanta has made history in Romania. The LOC staged the first ever European Cup and for the athletes it was a great race. Well, for almost all of them. Sadly Sergiy Kurochkin (UKR) had a freak accident as he mounted the bike leaving T1. Somehow his foot became entangled in the bike. “It all happened suddenly, during the transition from the swim to the bike I jumped on my bike and began to accelerate. Suddenly I felt an impact. My foot was a mess. One toe was missing and two others were broken and with open wounds. I did not feel the pain immediately but stopped by the police who called an ambulance. People who were nearby were shocked looking at my leg, but I was calm, waiting for the ambulance. Thankfully my coach Eduard Panarin came and found me and together we went to the hospital in Constanta. The doctors there quickly gave me some painkillers and decided to transfer me to Bucharest for an operation. I had to go in a medivac by helicopter. The flight took one hour and after a five hour operation it was successful, the missing toe seems secure. The Bucharest hospital is taking very good care of me. I am waiting for a speedy recovery to begin to train again! Thanks to doctors and all those who help and support!”  ETU I would like to wish him a speedy and full recovery.