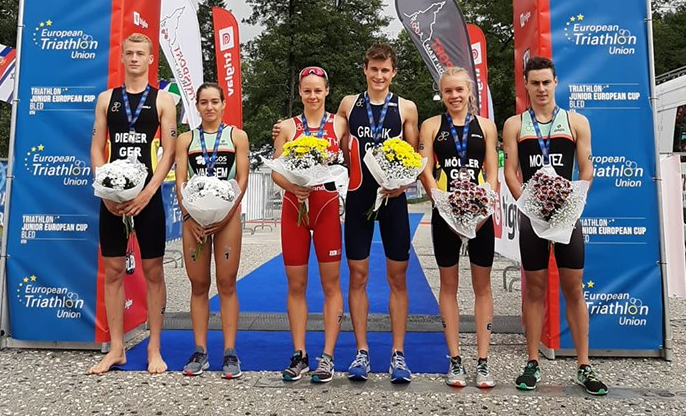 Impressive performances from the young German and Portuguese athletes has certainly added to their Federation’s tally after today’s race in the stunning surroundings of Lake Bled. With podiums in both races and top ten finishes, we will have to wait a couple of days for ITU’s results team to update the tables. The overall victories, however, went to HUN Karolina Helga Horváth and to Radim Grebík CZE.

The LOC has indeed re-vamped the event and now, not just the ETU Junior athletes but also the several hundred athletes who made their way through the rain to the city for the races of a variety of distances. 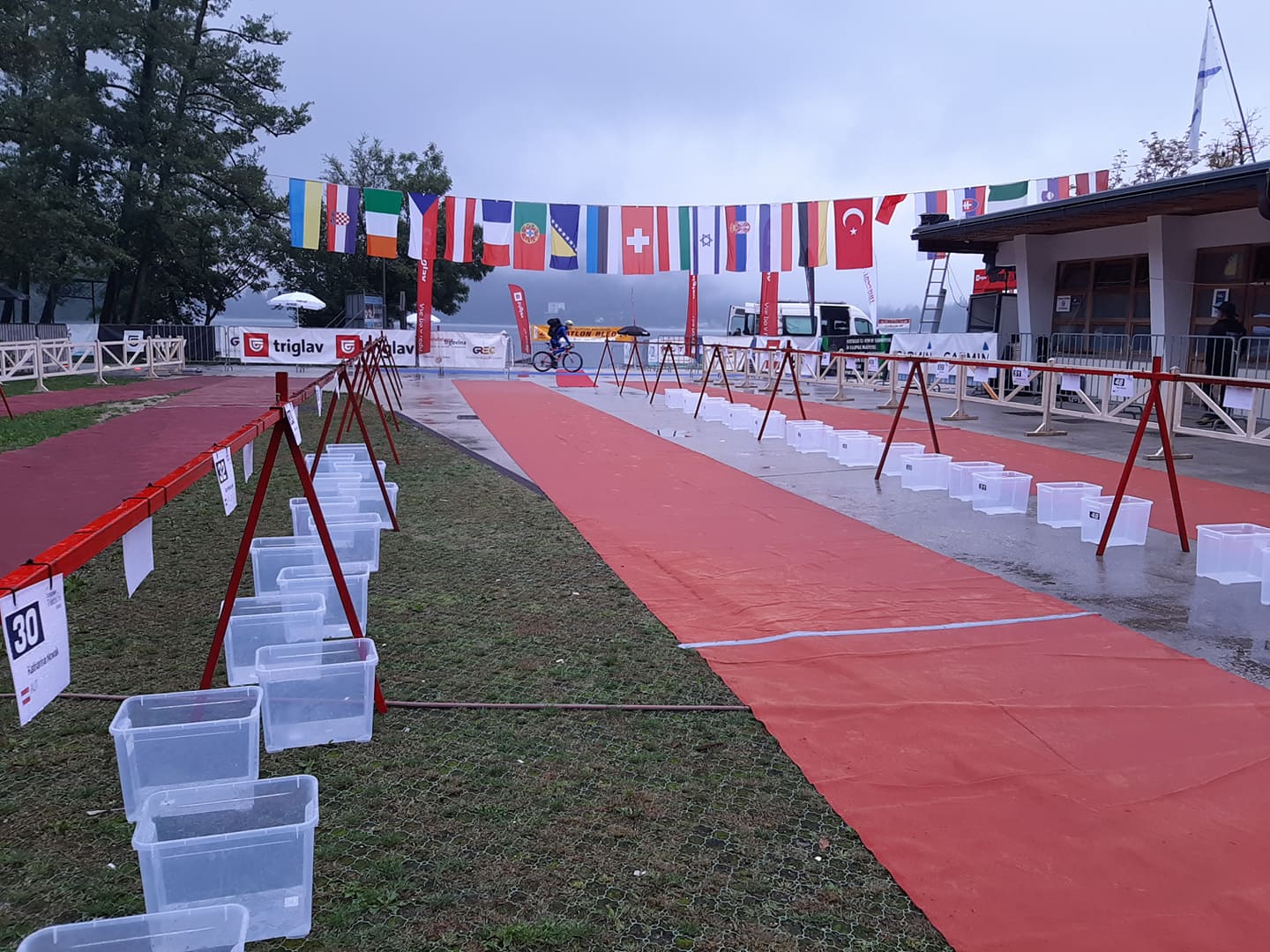 Yesterday looked pretty grim and the bike familiarisation, where the athletes get to ride the course, check out the climbs, turns and best locations to attack, was held in the rain. Our athletes, all wrapped up against the autumnal rain, didn’t seem too bothered but the coaches and supporters were buried under a forest of umbrellas, wrapped up in rain jackets and hoping for a warm cup of coffee. Click here for the rain-filled video.

The swim familiarisation gave the athletes a chance to see just how clear the water is and how warm it was.

An early start this morning saw the clouds hold back with the rain and conditions were greatly improved from yesterday. 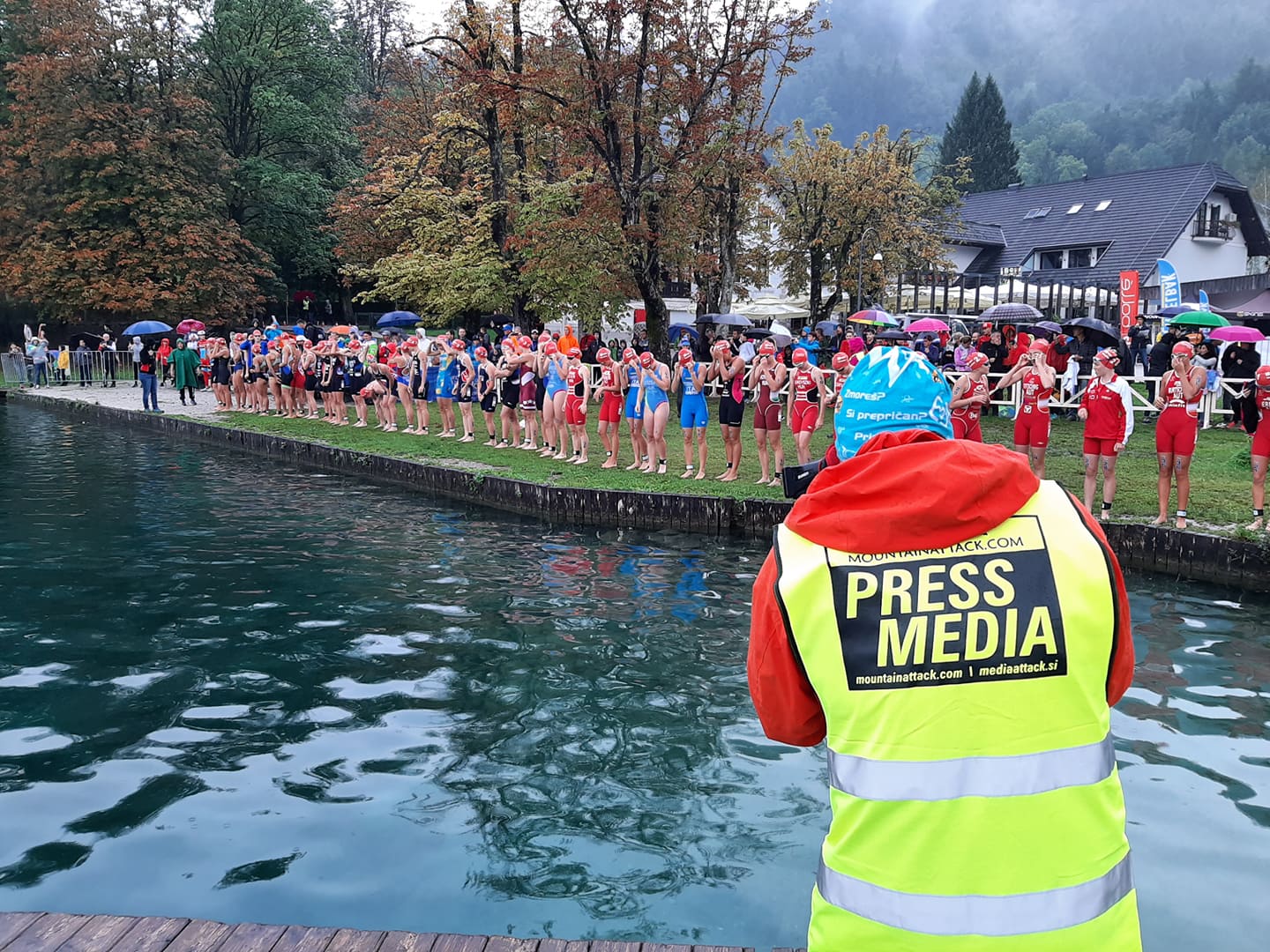 It was the women who set off first and it was Elisa Terrinoni ITA who once again showed her swim power and led them out. Tucked right on her heels was Hungary’s Karolina Helga Horváth. She too has been consistently strong over recent races and it was these two athletes who sped through T1.

Behind them and catching was Alžběta Hrušková CZE but she was just a pace behind home favourite, Tjaša Vrtačič. From Austria, it was Katharina Erber who managed to edge to the front in the swim and keep the leaders in sight on the run through the transition area. 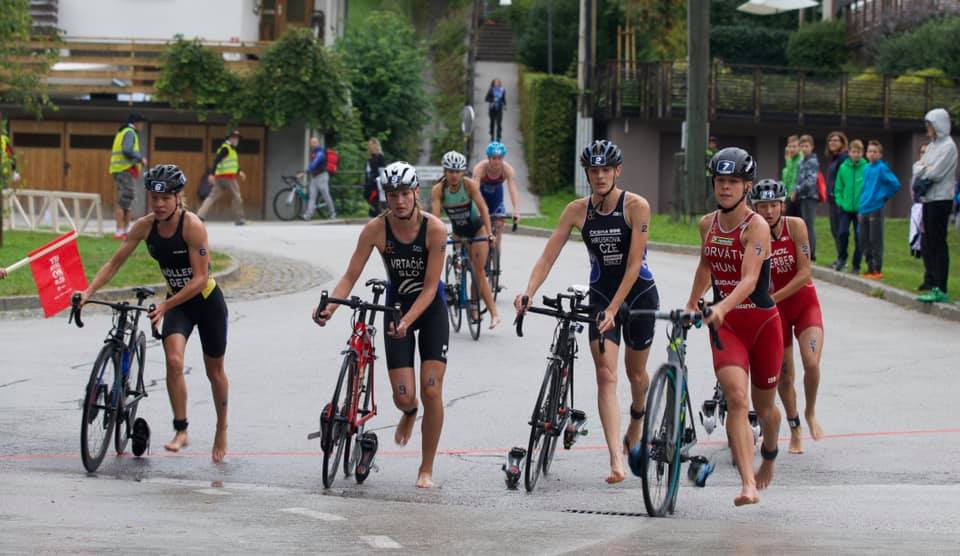 The leaders grouped well but behind them, Germany’s Katharina Möller and Austria’s Pia Totschnig were working hard on the bike after missing out in the swim. They soon caught the group but coming to the dismount line, Totschnig broke free and was first into T2. 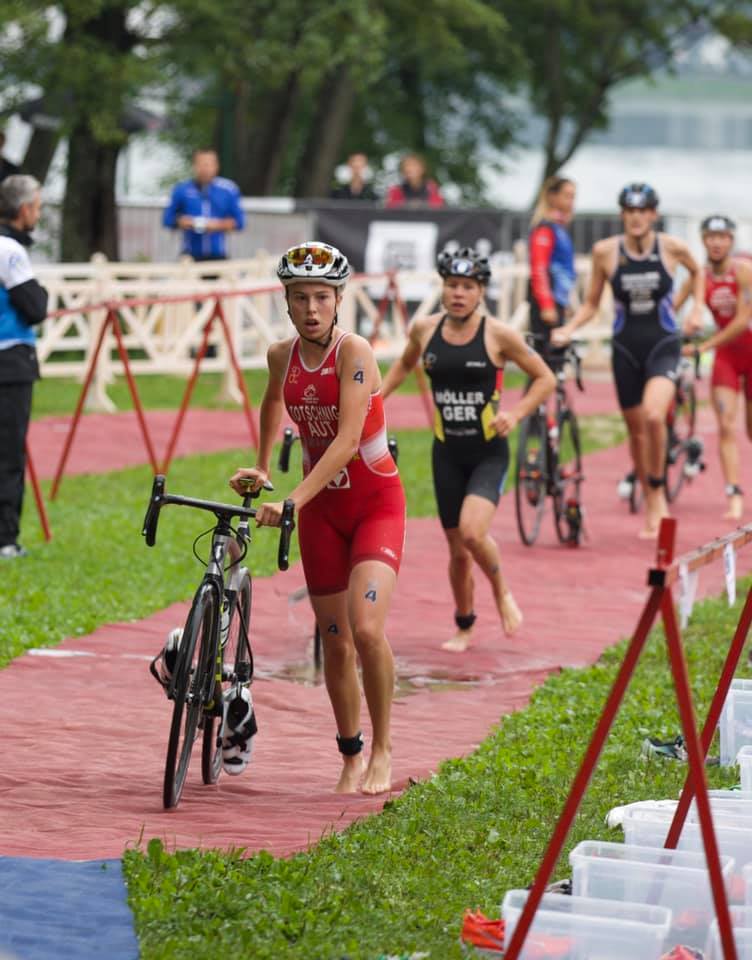 Behind her came Möller, Horváth, Hrušková, Vrtačič and Erber. Just behind them and after a truly remarkable ride on the bike to clock the fastest split of the day, came Marina Vargem POR. Incredible riding from the young Portuguese athlete had taken her to the leaders and past Irina Zhuldybina RUS.

It was going to be all down to the run now. One out and back lap – at the far turn point the athletes would be able to see what advantage they had or what threat was being posed by those chasing them.

Soon enough the sub-12 minute runners had broken free and it was going to be medals shared between Hungary, Portugal and Germany.

In the end it was the younger Horváth who had just enough pace to claim the win ahead of Vargem, with Möller rounding off the podium. 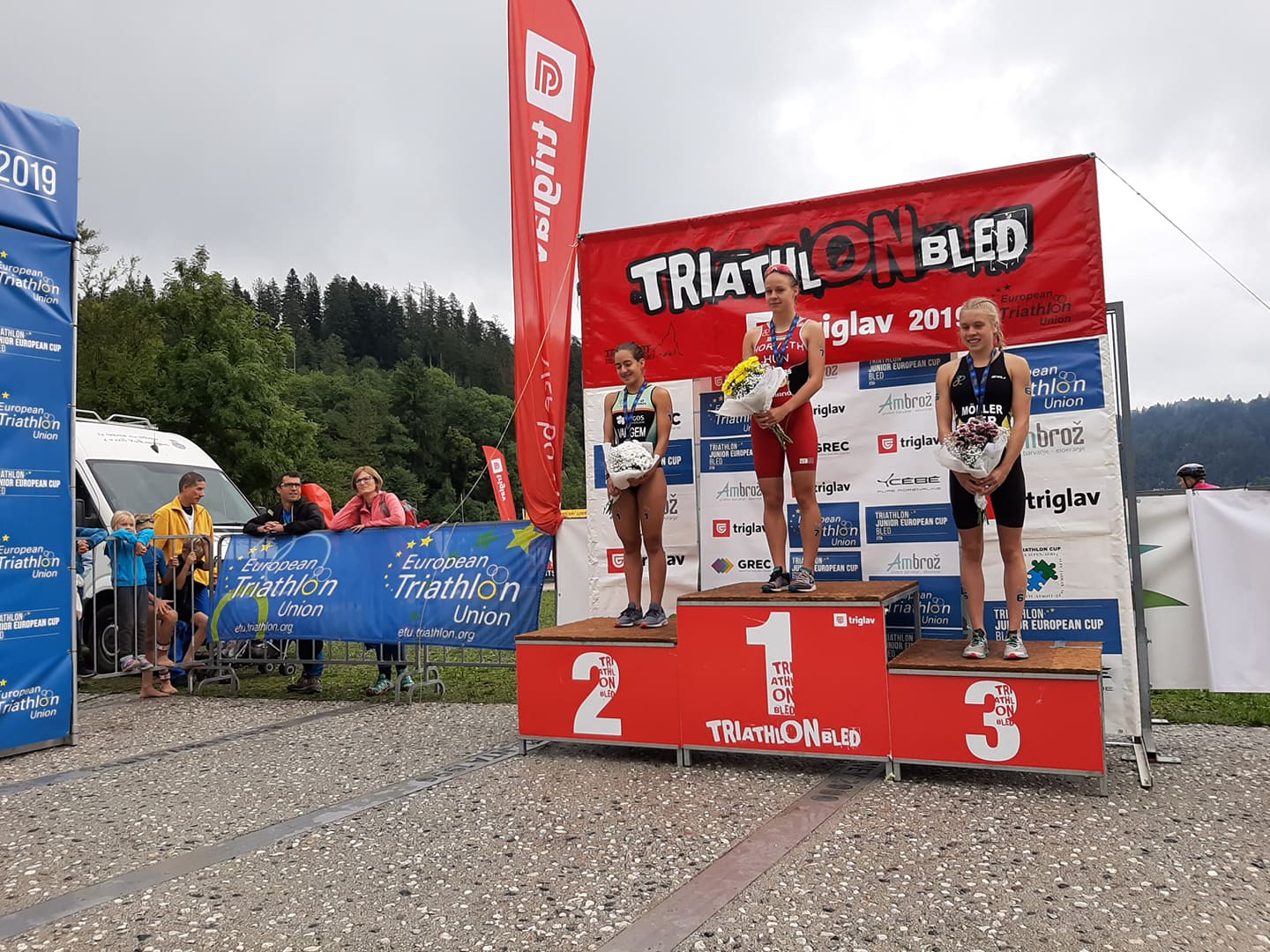 With the women’s race over, a quick tidy up and it was time for the men to race. The deep water start was even more impressive as the feet kicked up and like a huge line of speedboats, the athletes accelerated out into the lake towards Blejski Otok (Bled Island). 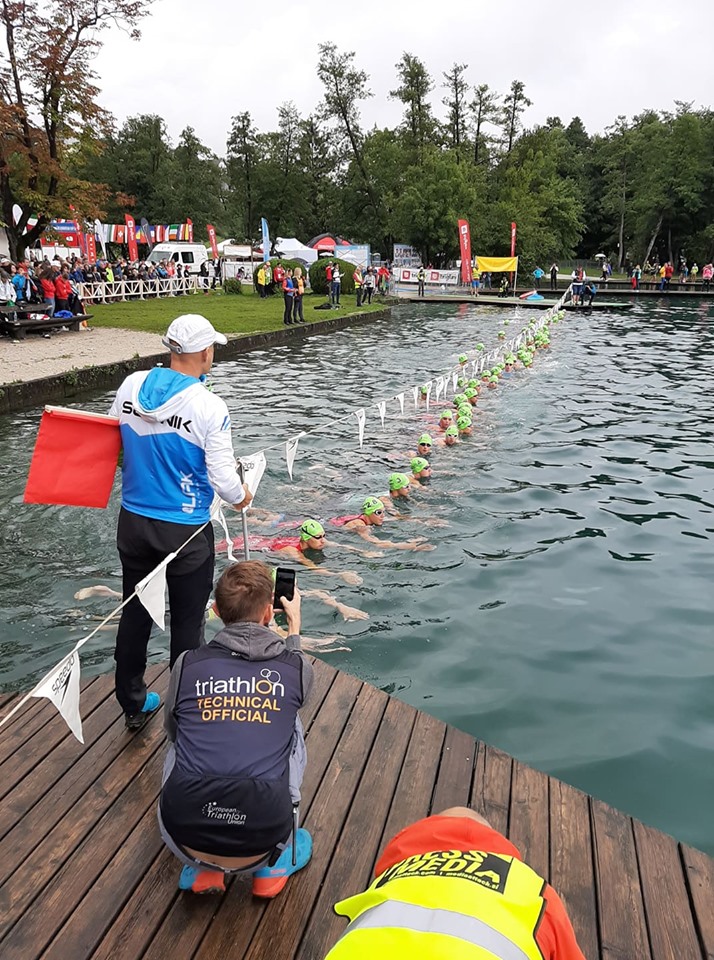 It was once again an Italian athlete who led the swim. Nicolò Strada. He too has been so strong in the water this year. Chased into T1 by Gergely Kiss HUN and José Vieira POR, the three were comfortably leading but behind them were the strong cyclists and this really was a course where the stronger cyclists and runners would have the advantage.

Race favourite, Radim Grebík had to work hard on the bike but soon enough had joined the leaders. Alongside came Portugal’s Alexandre Montez and as the distance was eaten up by the fast-riding men, the pack grew to just over a dozen.

Grebík’s attempt to break away from the group nearly succeeded. Click here to see the video.

The Czech athlete’s show of power was matched by the group, who followed him into T2. Grebík led, Strada followed him. Montez and Jan Diener GER close behind. Click here.

It was going to be all down to the run now and it was Grebík who threw down the gauntlet. The out and back course has enough twists and turns in it to allow an athlete to escape from view but once they hit the far turn, all it revealed and then it is simply a question of holding out to the finish or, if you are chasing, to give it all you have. 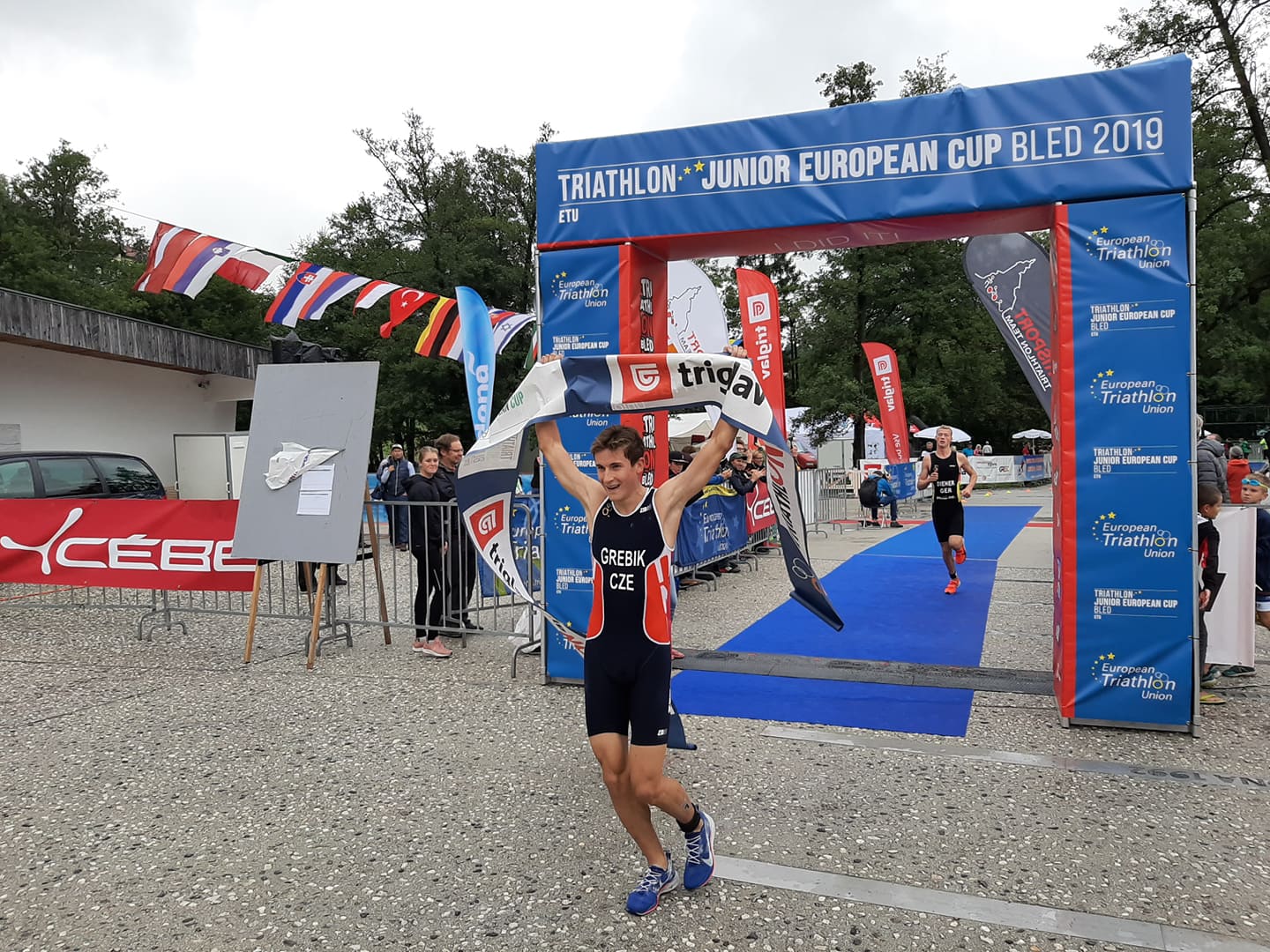 Grebík’s only threat was from Eric Diener GER, who wasted no time in T2 but the German’s pace could not match that of the Czech athlete and it was gold for Grebík just a couple of seconds ahead of Diener. Montez had done just enough to claim the bronze ahead of teammate Vieira. 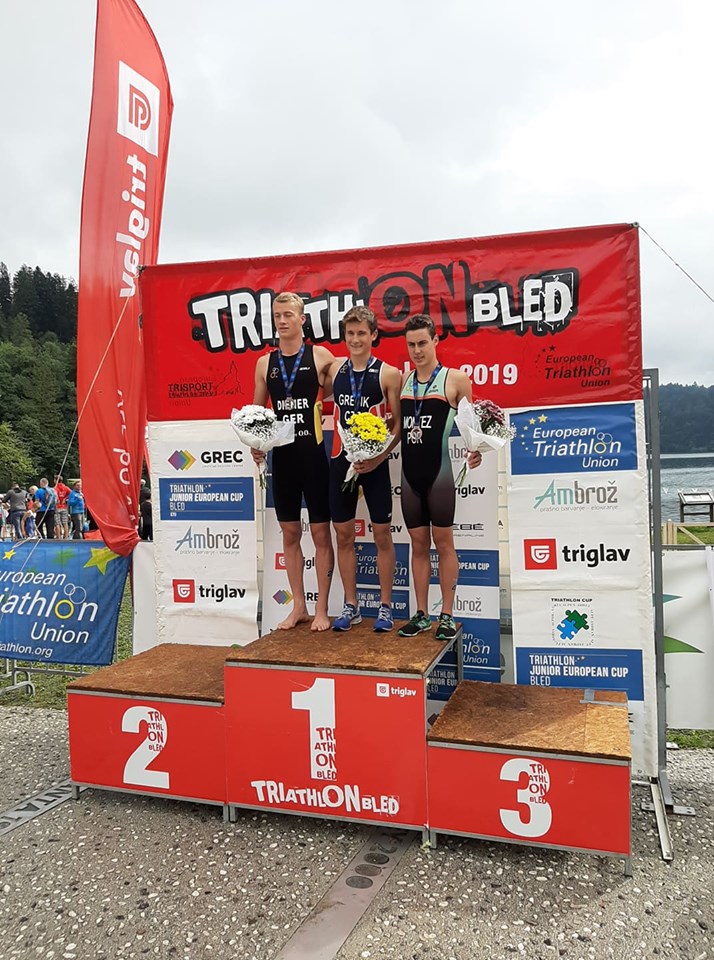 Both races over before 11:00 and a whole afternoon of local, open events to follow. Feedback from the athletes and coaches was positive. The straight run to the wider finish area has vastly improved the event and made it easier and safer for all. 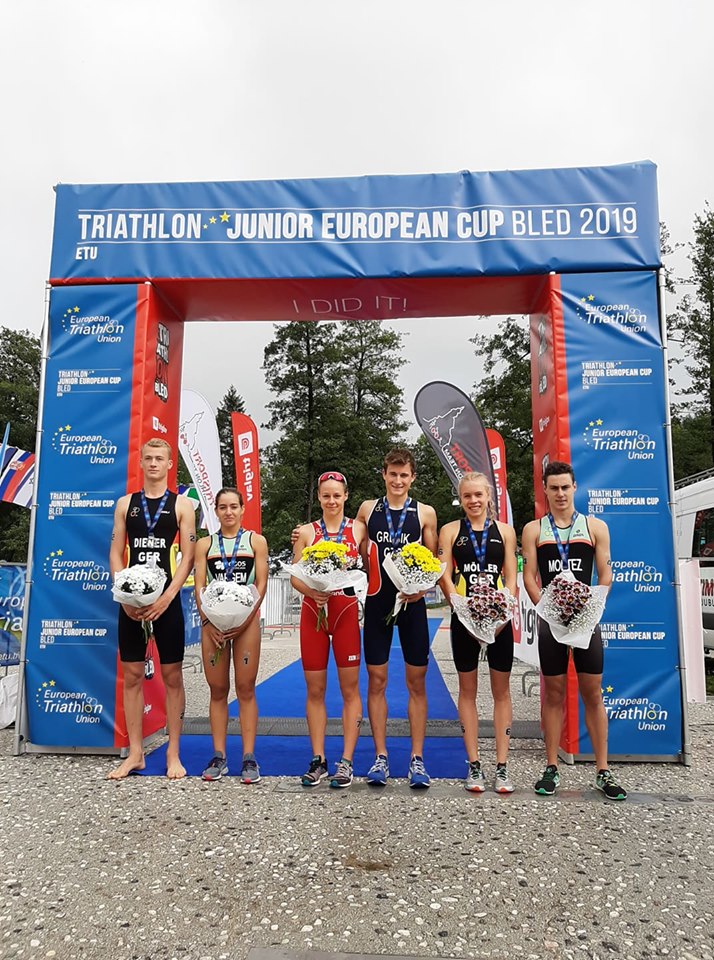 As the local media team are still working on the photos, we have relied on a selection of images and short video clips taken by Christoph Totschnig, Miro Kregar and ETU Board Member, Galina Shipovalova.