We have become used to seeing Ukraine’s Yuliya Yelistratova raising the finish tape above her head in Alanya. This year saw her claim her fourth win on the Saturday but on the Sunday, it was a victory in the Junior Men’s race for another Ukrainian, Vitalii Vorontsov. He can add this win to his Junior Duathlon and Junior Aquathlon title that he won earlier in the year in Târgu Mureș but the victory here in Alanya is a great and positive signal to him, his coaches and to the Ukrainian Triathlon Federation.

The Alanya beach start sees the athletes run into the shallow waters. In the days leading up to the race, they were all down at the beach trying out various techniques to see just how they could get the best possible advantage in the water. Some swam in the shallows; some ran, lifting their legs higher and higher as the water deepened. A good start would be essential as this event is an end of season opportunity to collect points.

Yuliya Yelistratova UKR went wide on the swim, choosing to start closer to the Cleopatra end of the beach and as soon as the start signal was sounded, began to gallop out to deeper water, using her powerful legs to gain as much of an advantage early in the swim. She knew that there were stronger swimmers there but that when it comes to the final run, she is the one to beat. 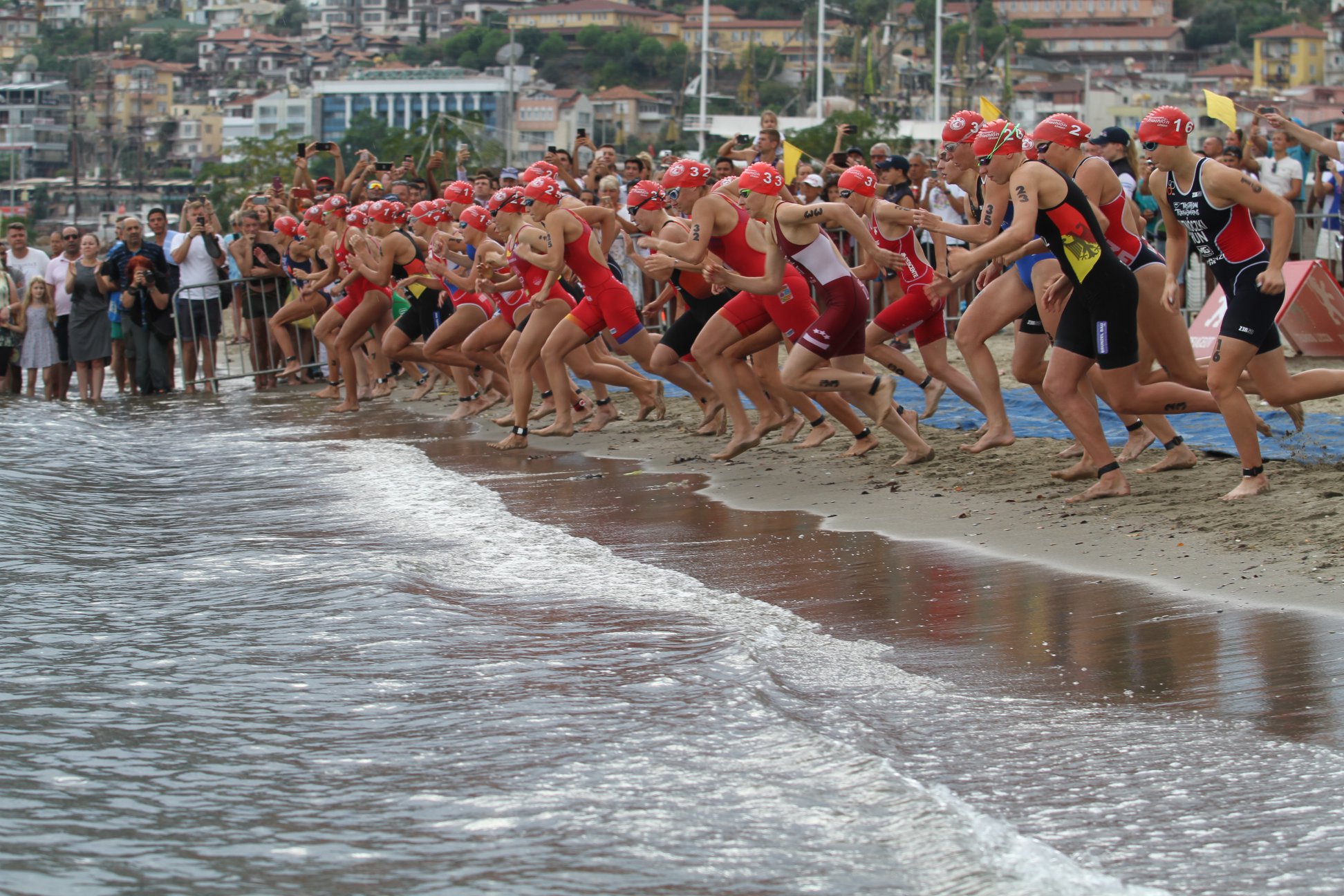 It was Hungary’s Dorka Putnóczki who swam free and had a clear run into Transition. Behind her was Alicja Ulatowska POL, whose position in the ETU Rankings Series is a reflection of her consistent racing this year. With a 6th place in both World and European U23 Championships and as reigning World Aquathlon Champion, she has had the most successful year of her career. 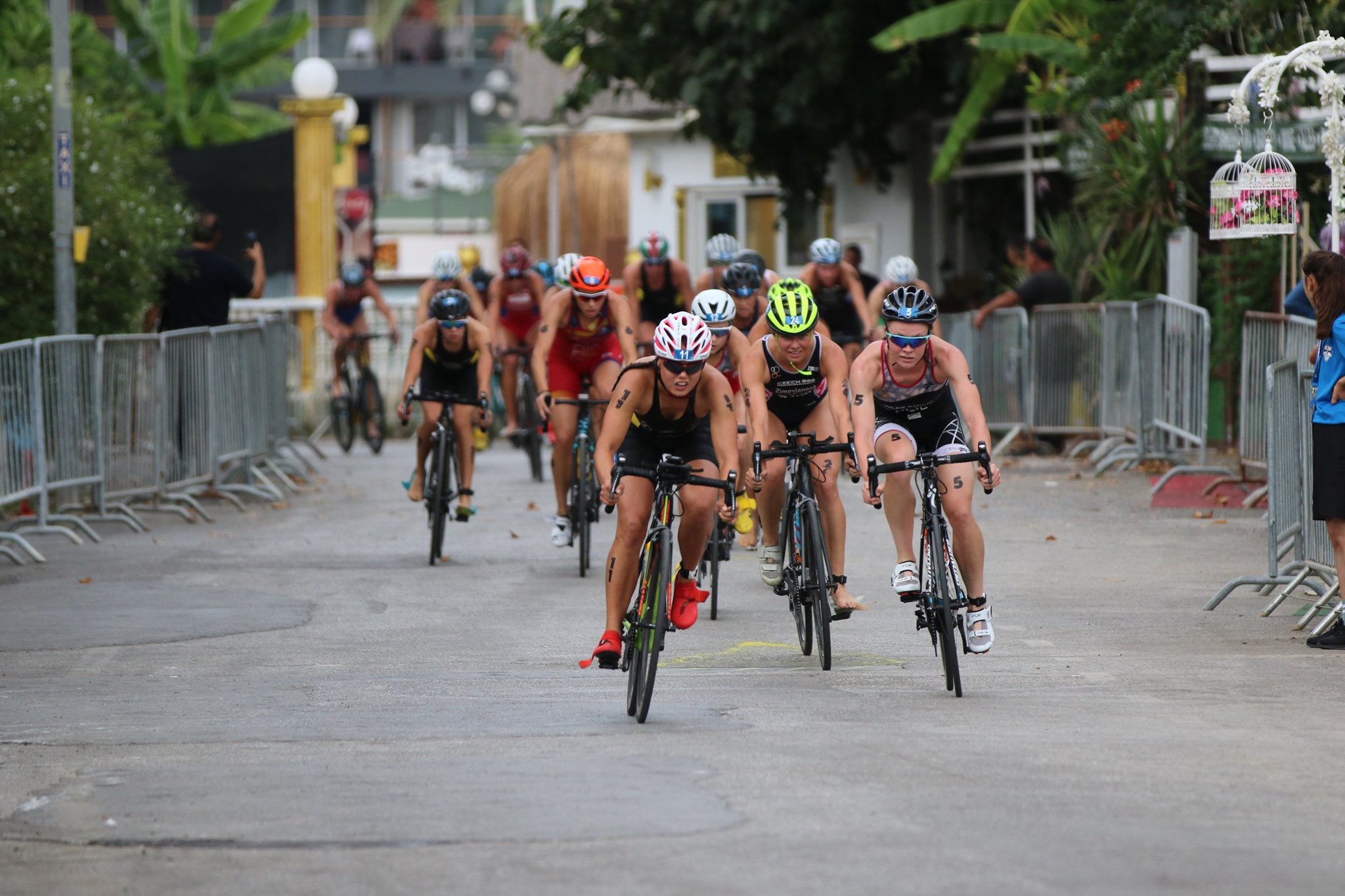 She found herself leading on the bike, with Lisa Tertsch GER tucked in behind. A huge pack followed the small leading group, with Alexandra Razarenova RUS and the distinctive Champion-System uniform of the Ukrainian, Yelistratova.

Down to the final run and it was a showdown between the young, talented Terstch who has raced so well this year and the older, immensely experienced Yelistratova. Moving up to full power, she attacked and pulled away to take the win once again. A blistering 17:28 for the final run of 5k. 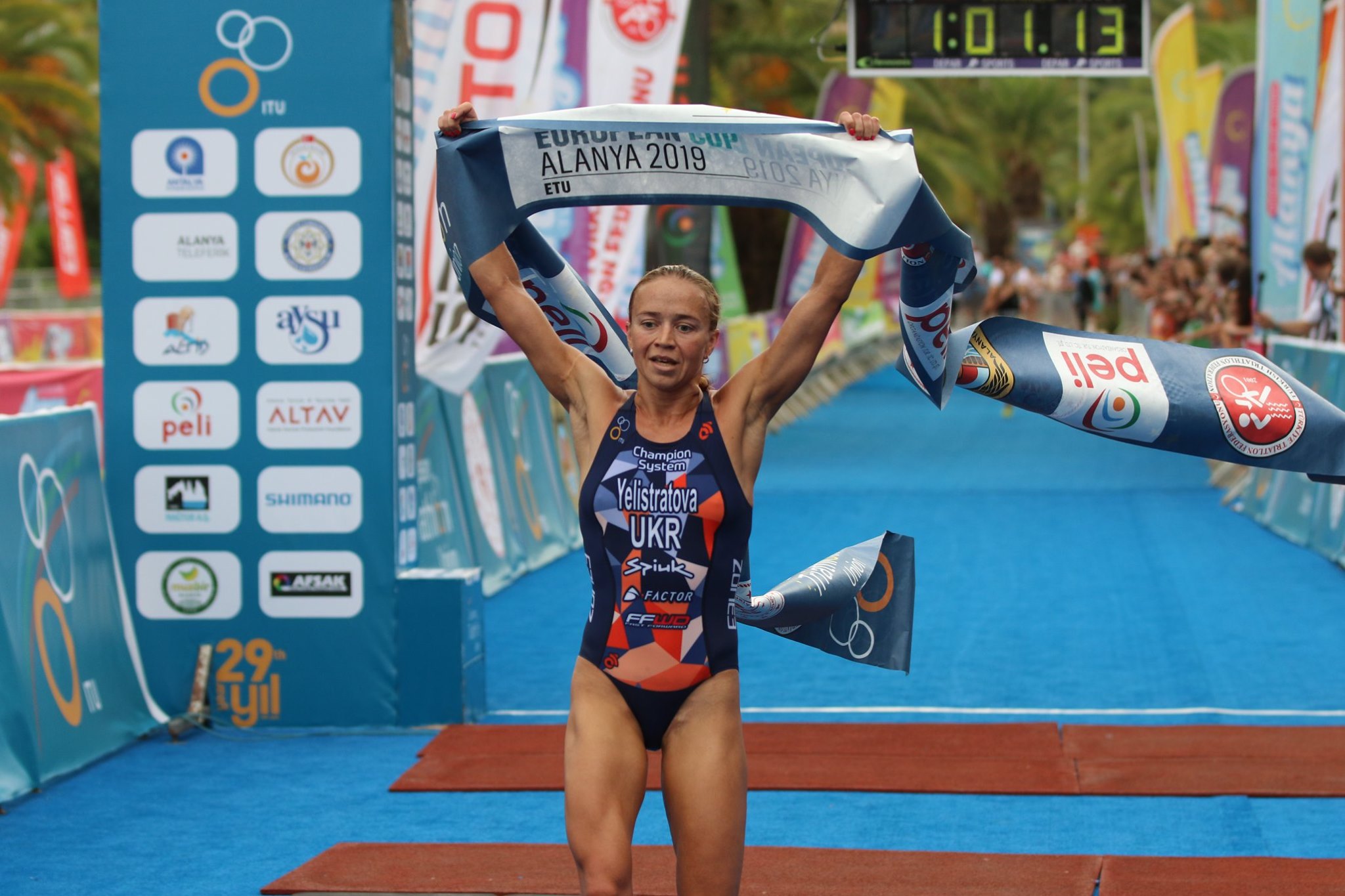 This victory adds valuable points to her tally on the ETU Rankings Table. Currently in 5th, there is still an outside chance of winning the title yet again when she races in Funchal. We eagerly await the ITU Points Wizards’ new tables. 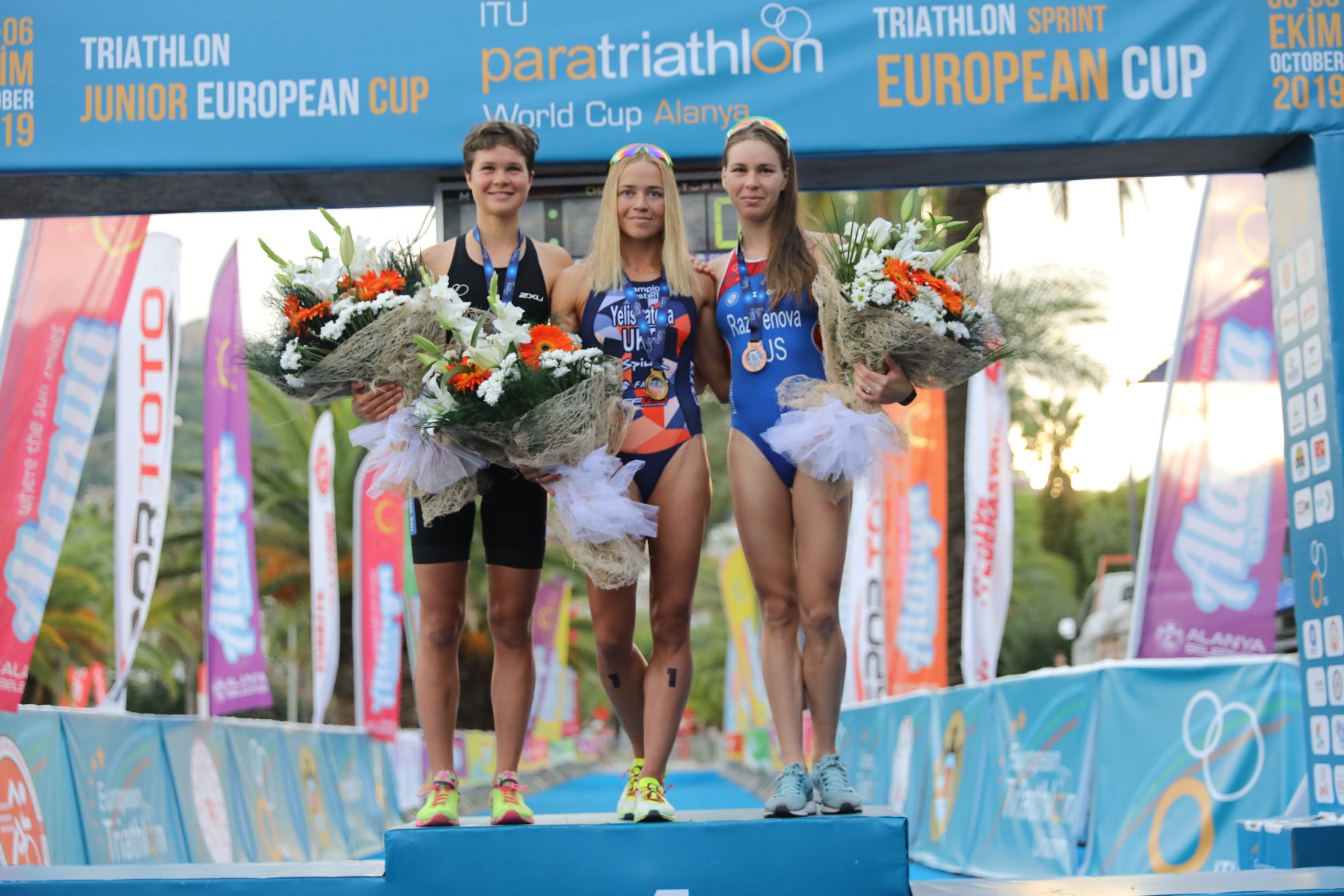 With celebrations no doubt going on late into the night (Alanya has that sort of effect) it was time again for everyone to get ready for the races on Sunday. A little bit of rain had settled but would soon be burned off by the sunshine.

Coming into this penultimate race of the season, there was a lot of pressure on one Yorkshireman. For the race favourite, it was to be one of the toughest events this year. 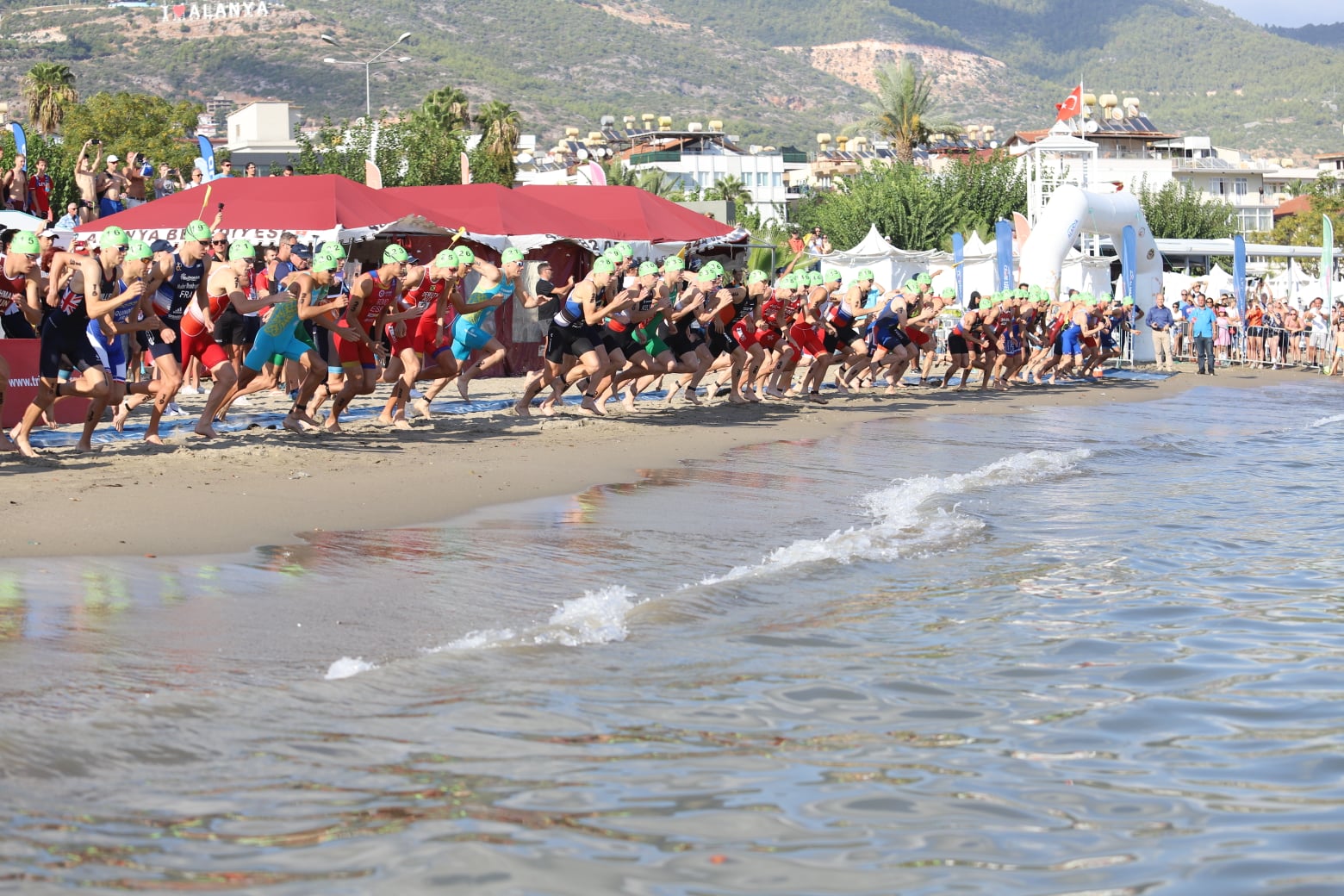 The swim was led by Csongor Lehmann HUN, with a clear run in to T1 and an equally clear escape out onto the bike course but behind him was a huge beast called, “The Rest”. The chase pack streamed up the beach, under the showers, across the road and onto the blue carpet, grabbing and securing their helmets, snatching bikes from the racks and rushing down to the mount line.

A massive peloton soon developed, with Sam Dickinson GBR doing his best to ensure the pace stayed high. No escape for the Brit this time. No repeat of Tartu. Instead everyone’s eyes were on him, matching his attacks, ensuring that he could not escape. 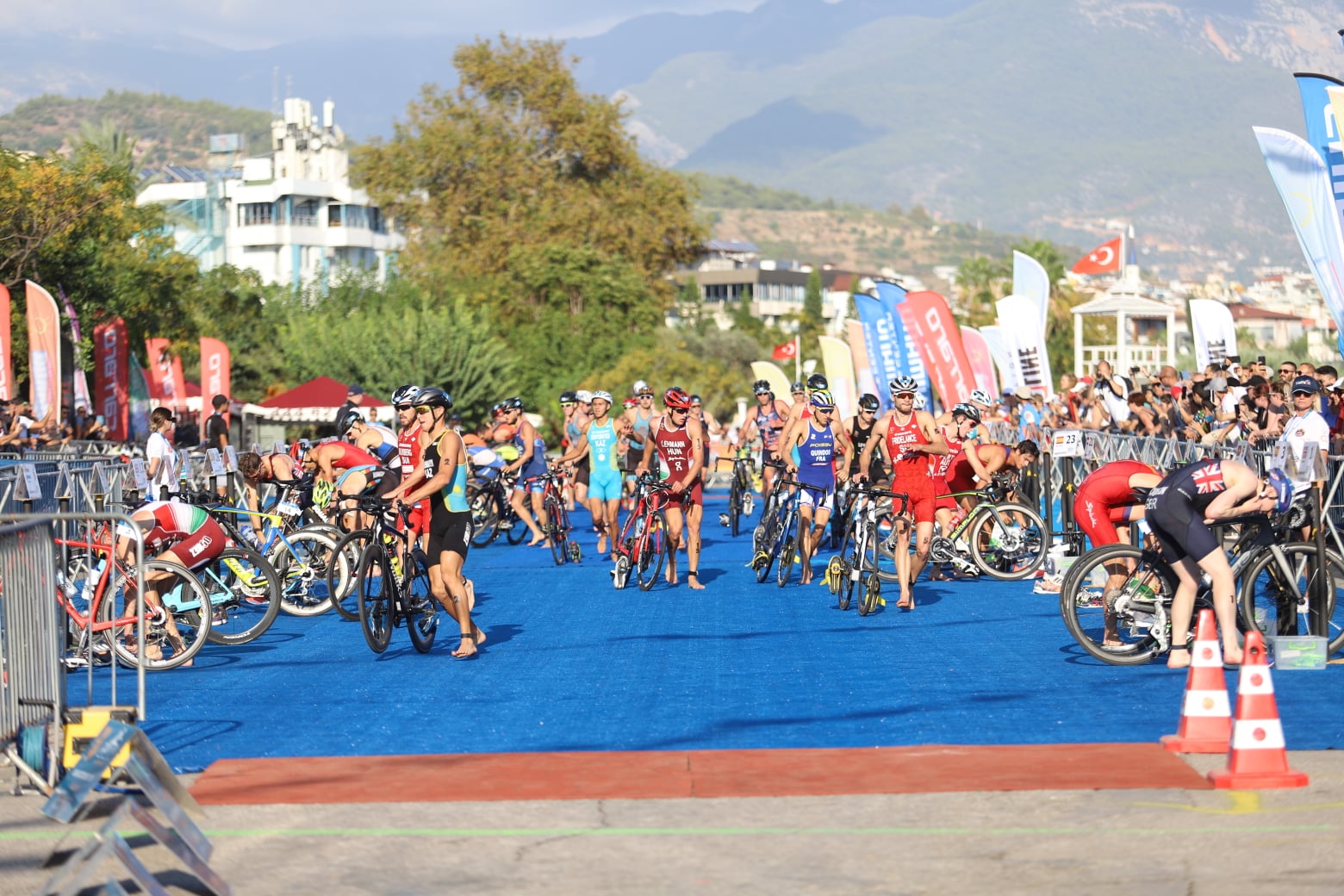 Dismounting their bikes, Dickinson managed to get to the front of the pack but the attacks continued and his pace was no match today for the likes of Spain’s Genis Grau and Sylvain Fridelance SUI. The Spaniard had a slight advantage over Fridelance but the Swiss athlete was running slightly quicker. It was only in the final 1,000m that the race was decided with a massive effort from Grau to secure the win just a stride ahead. From behind, James Teagle GBR, produced what is probably the best race of his career to secure the bronze. He has finished higher on the podium before but in this field, against this line-up of athletes, his race was mighty. 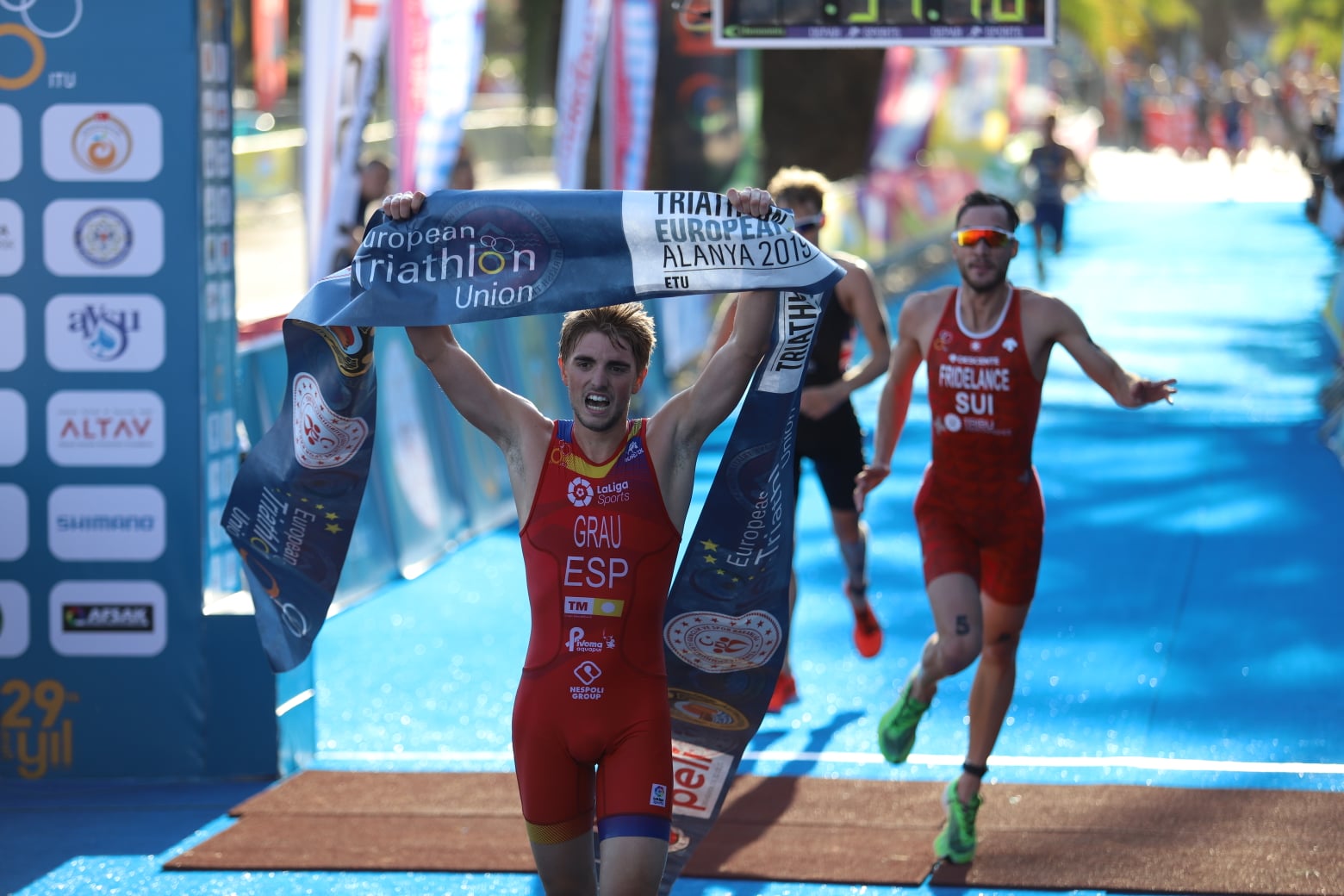 From Grau, the reigning Mediterranean Champion, this result is a significant one. He has beaten some of the fastest runners on the circuit.

Click here to hear his post-race comments in Spanish. “He tenido muy buenas sensaciones. La natación no me ha ido muy bien, pero por suerte con el segundo grupo hemos enganchado el primero y  se
ha formado un grupo muy grande donde íbamos rodando tranquilos. Al bajar de la bici me he bajado adelante, he podido salir primero. Hemos mantenido un ritmo rápido y fuerte y al final me he encontrado
solo y a muy buen ritmo, y al final me he llevado la victoria.  I feel pretty good about this. The swim wasn’t so good for me, but fortunately with the second group we managed to catch up to the leaders. It became a big peloton where we were riding a steady pace. When we got off from the bikes, I was in the front group. We managed to keep a fast and strong pace and in the end I found myself alone and I was able to claim the win.” 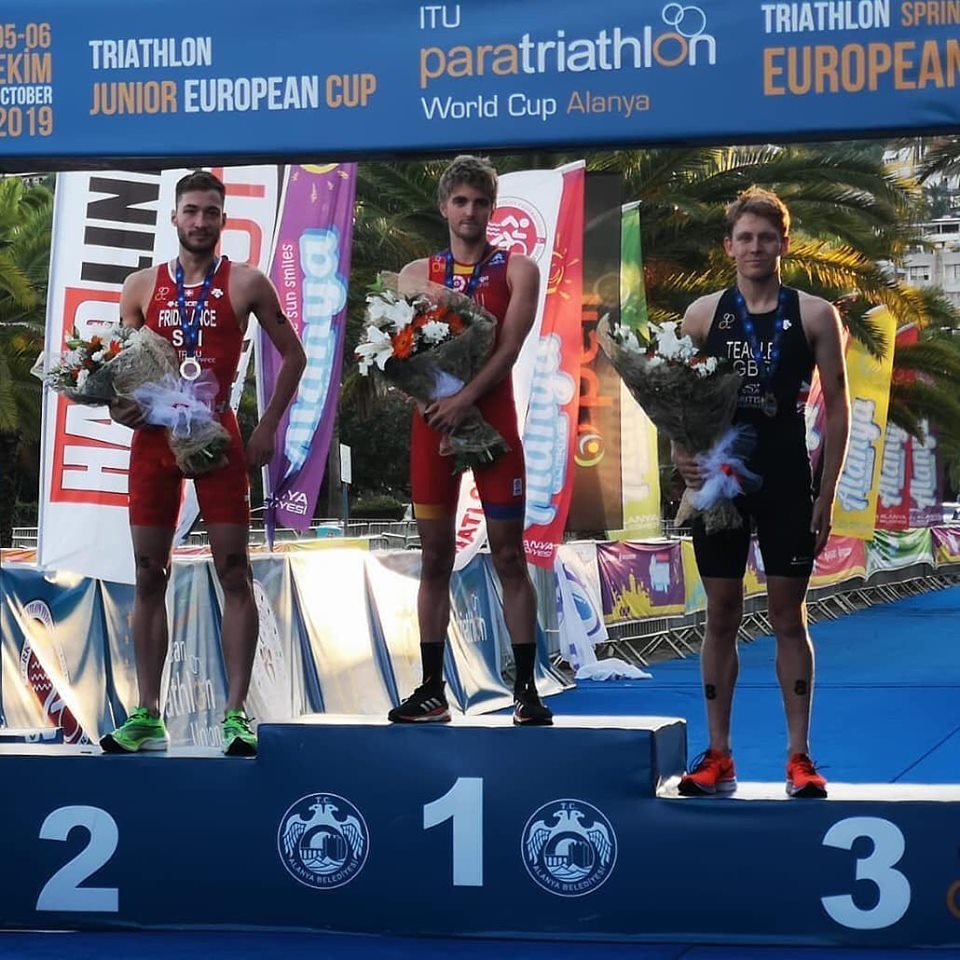 Dickinson’s finish was not on the podium but was in the top ten and will nevertheless have delivered valuable points to him ahead of Funchal. 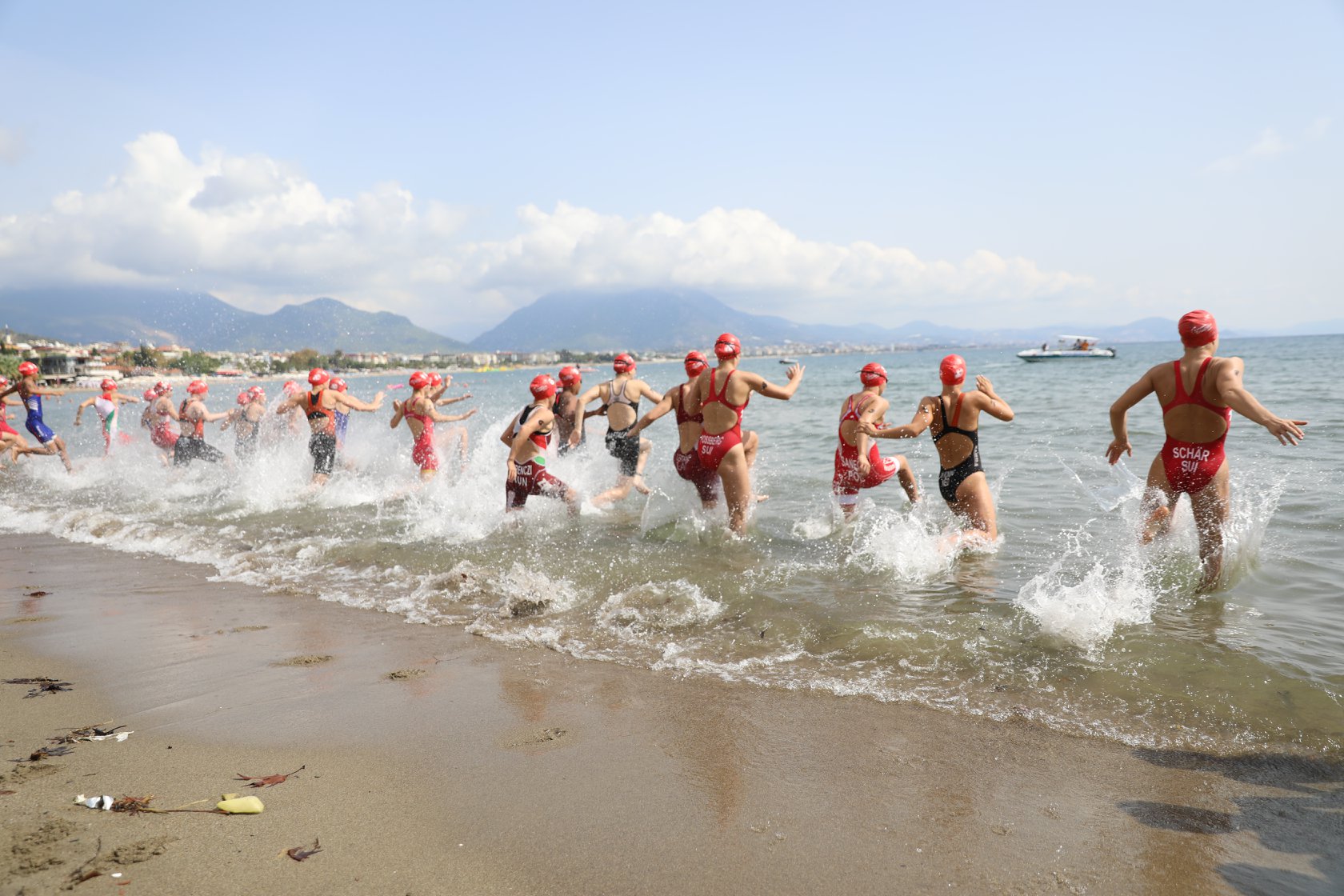 32 Junior Women lined up, with the water a shade under 27C and the air edging towards 30C. As expected, Barbara de Koning NED led the swim but right there with her was Israel’s Aviv Levi. 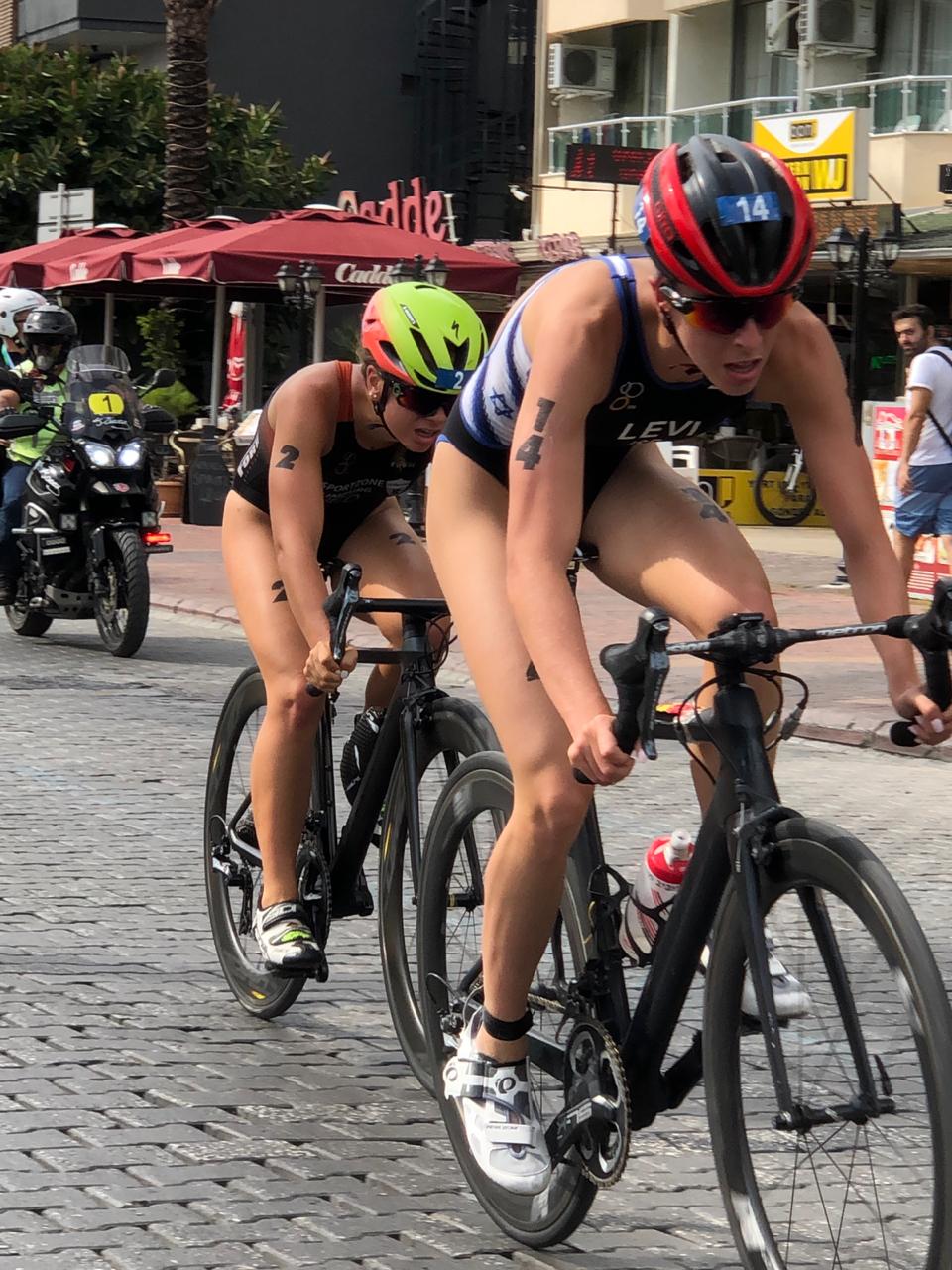 The pair were comfortably ahead of the chase pack, with a lead as they ran up the beach of almost 15 seconds. De Koning wasted no time in T1 and with Levi set about an attack on the bike that, over three laps, took them clear of the pack.

Behind them, Iratxe Arenal Arribas had been caught by teammate, Esther Gómez González to put the Spanish athletes in a great attacking position. Julia Sanecka POL and Cathia Schär SUI were riding hard but with a lot of work to do to catch the leading pair. The chase pack of ten athletes lacked the determined coordination that would bridge the gap but the stronger runners knew their time would come.

And come, it did. Out of T2 and the sub 20-minute runners would benefit over the three-lap run. 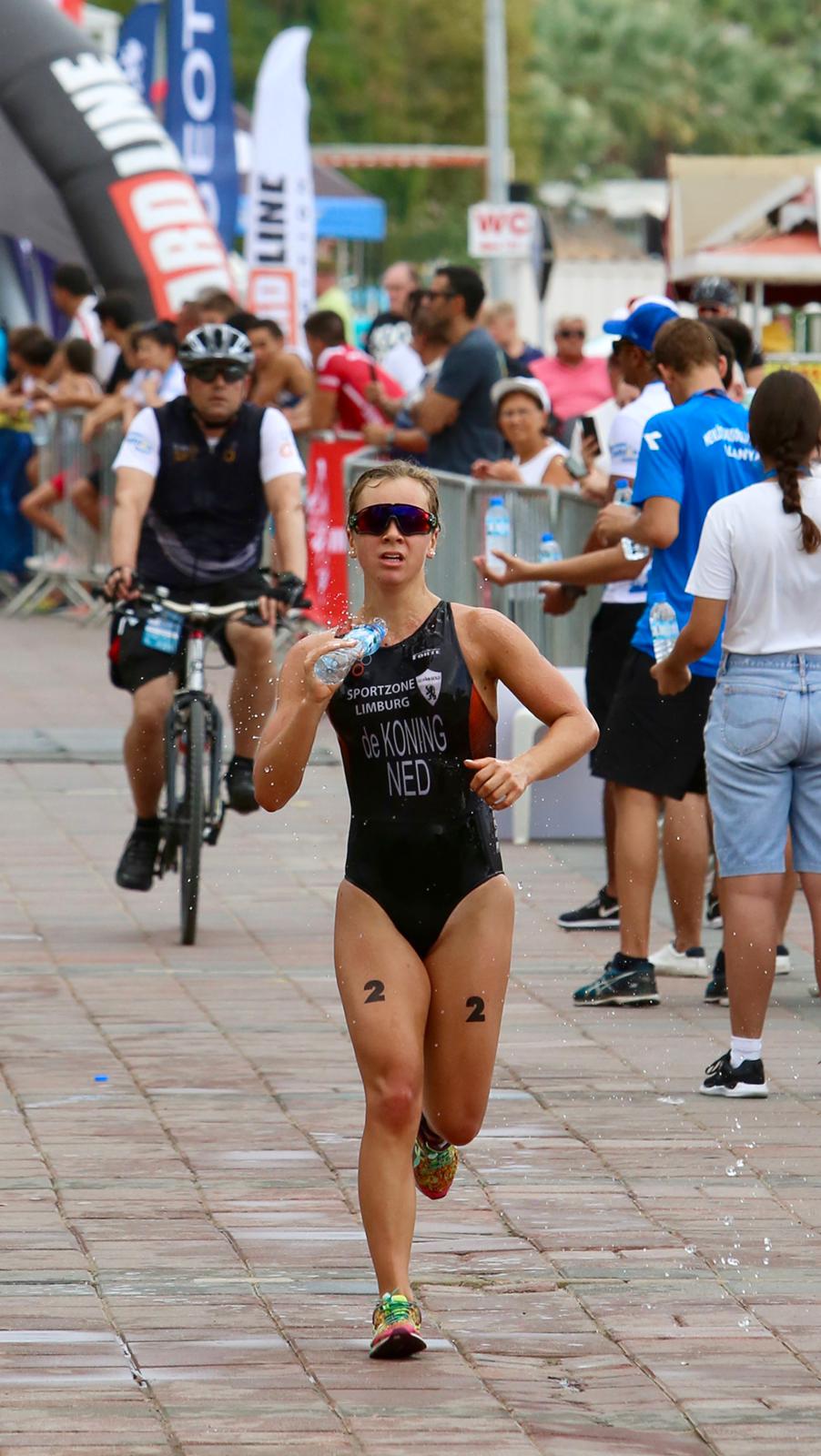 Early on, De Koning knew that her lead should be good enough. Alanya has long been a favourite with the Dutch. In fact it was holiday-making Dutch tourists, who brought the sport here back in 1991, making it the second oldest event in Europe, behind Almere. With more than a few Dutch voices shouting out encouragement, the UK-based Dutchwoman stormed to the finish tape, with time enough to relax and enjoy the moment until Schär crossed to take silver ahead of Sanecka. 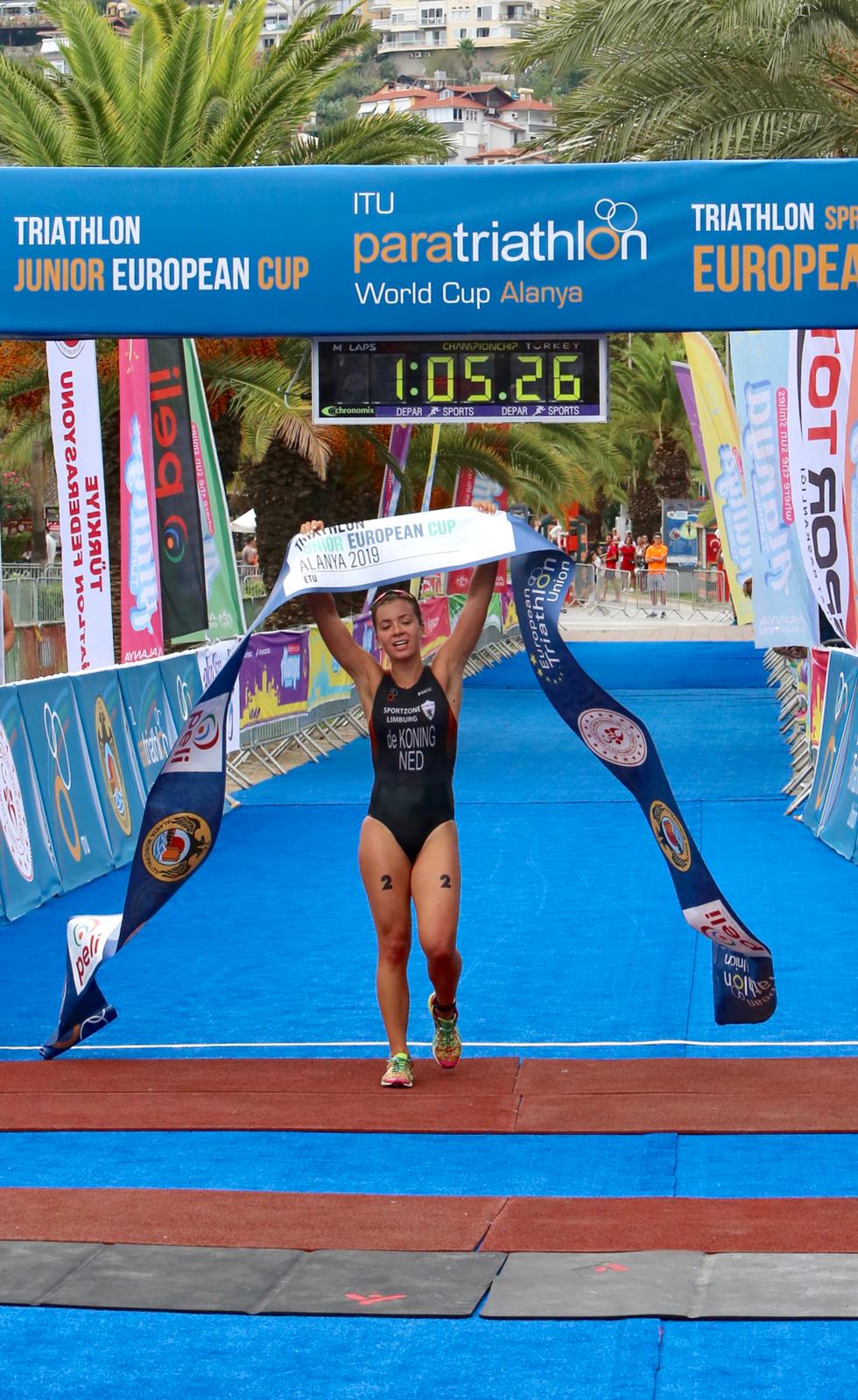 For De Koning, “It was an amazing and very well organised European Cup held in a beautiful location! I enjoyed every moment of the race in a tough field in front of great crowds! I’m super happy to come away with the win and I will definitely be back to race here again!” 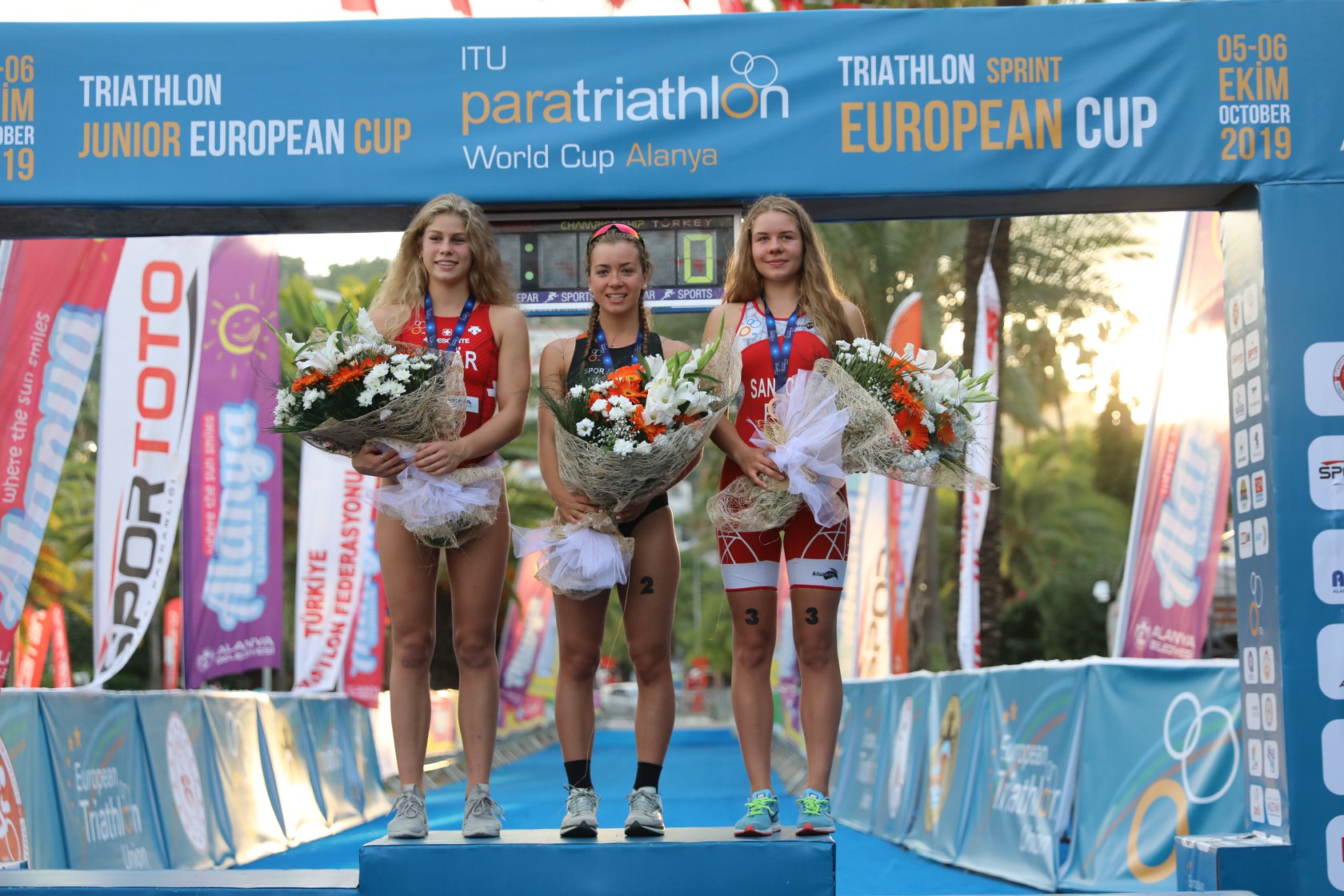 The athletes all commented on the great crowd-support and with the buzz of the live commentary still ringing in people’s ears, it was time for the Elite Women.

JUNIOR MEN
The athletes, tense on the start line and then the explosion as they set off for the one-lap swim. It was Russia’s Alexander Grigoriev who swam with teammate, Pavel Sorokin to lead the rest out. It was only a marginal lead and the long line of frantic athletes soon filled T1. In a flash the transition area was almost empty and the whole focus moved to the bike course.

Ukraine’s Vitalii Vorontsov had not been able to dominate the swim but having seen his run pace, his position, just 8 seconds off the lead as he mounted his bike, meant that he would soon power his way into the pack and then, all being well, run home for the win.

The bike was led by a small group who had managed to break away from the main peloton. Calum Young GBR, worked hard. UK-based Ábel Sinkó-Uribe was putting in his fair share of the watts along with Germany’s Rico Bogen, Tzu I Pan from Taipei and Spain’s Igor Bellido Mikhailova.

The final 5k gave Vorontsov a chance to excel. His 16:17 over the three laps was simply stunning and, crossing the line with the flag held high, he was a worthy champion. 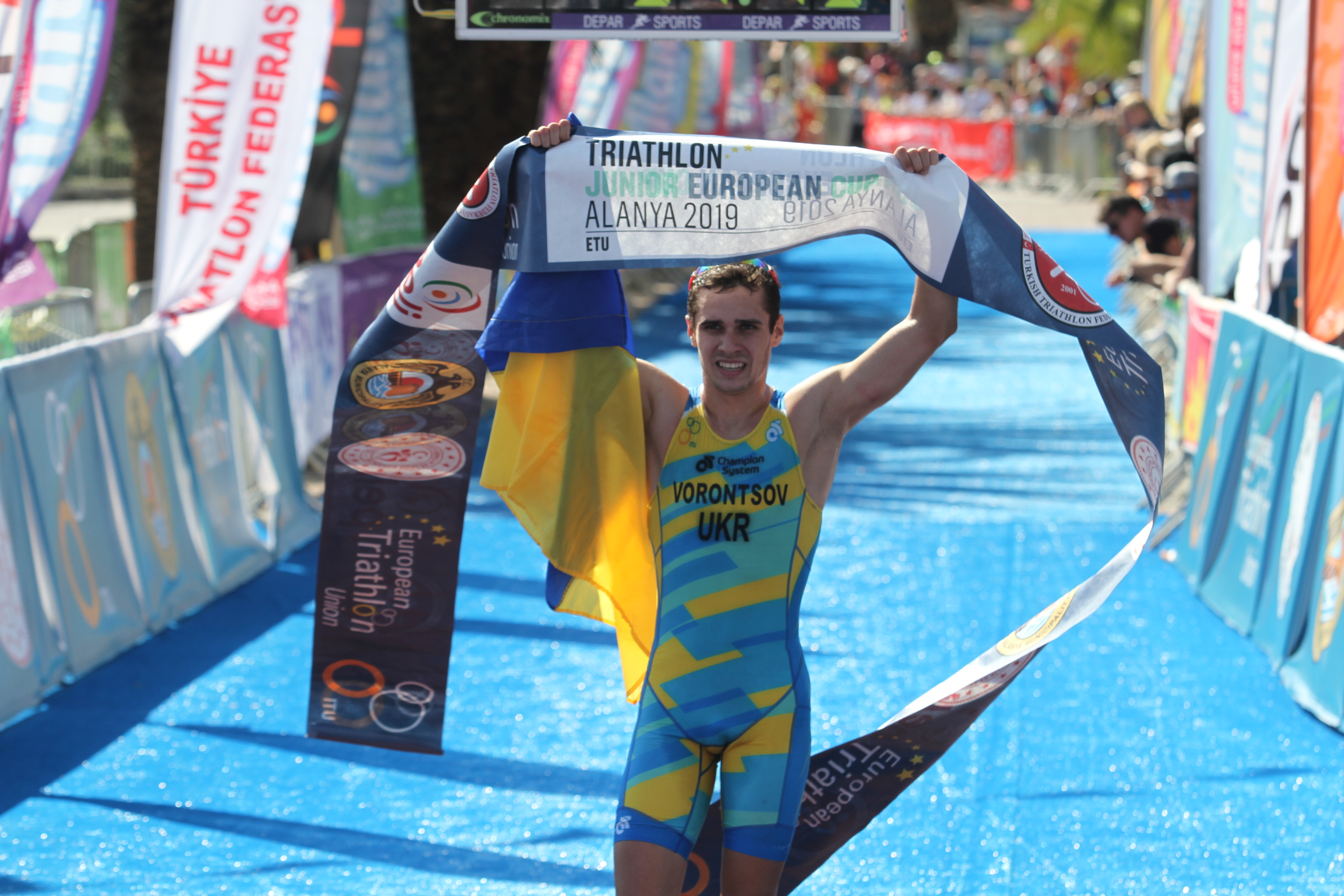 Back home in Lviv, a certain Oxana Vorontsova was beside herself with delight, “Мій чемпіон !! Пишаюся сином! My Champion, Proud of my son!” She has every right to be so. Sorokin looked good for silver but a great final attack from Pan saw the Russian nudged back into third. 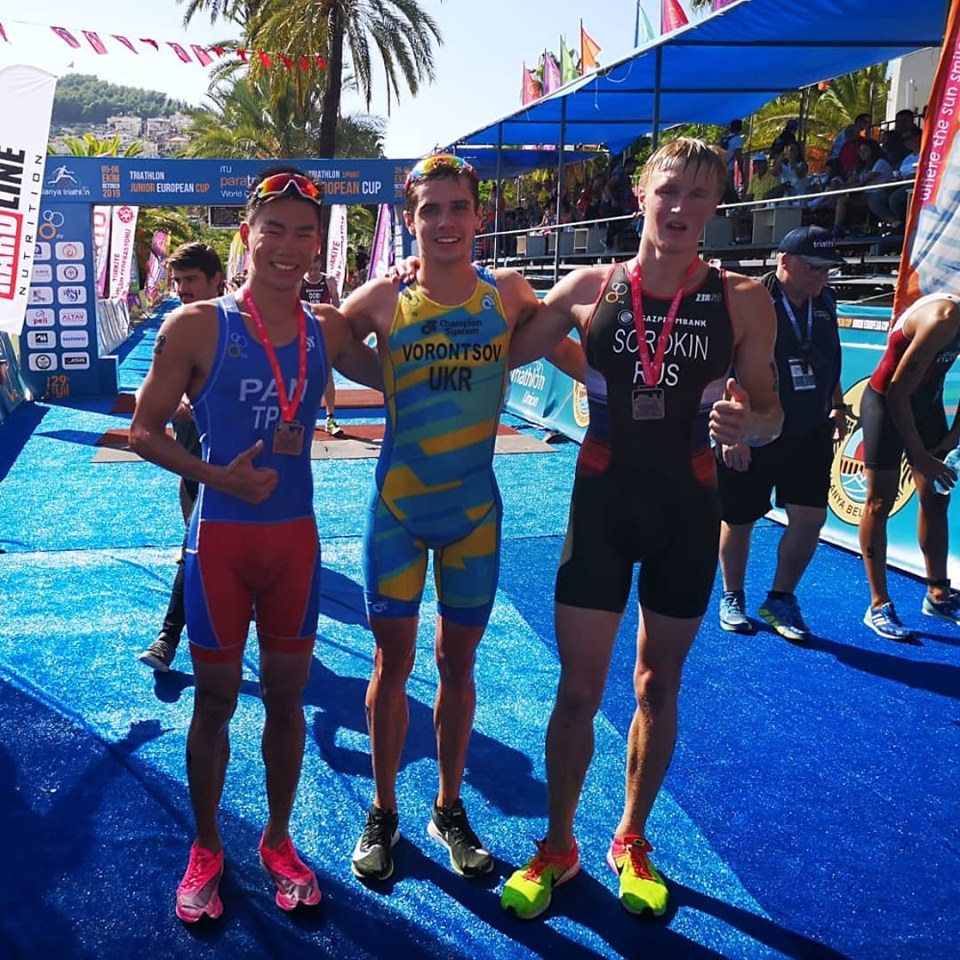 Results for both Junior Races can be found here.

Big thanks to Feyzi Açıkalın. He knows Alanya well and has been part of the race for as many years as swim, bike, run has been part of Alanya. He was on the ground to take the photos and shared many with us over the weekend. Further images from Feyyaz BALIKÇI, of HubShu Creative and ETU Executive Board Member, Alicia García Pérez.