After the hard work of the day, it was time for the delegates of the 2019 ETU Gala Dinner to get dressed up for the celebration of 2018’s successes. With bow ties and posh frocks very much the standard, the tables were filled and the chatter, in so many different languages filled the room. Suddenly, the room was filled with noise as a lone drummer attacked. Marching through the hall, past table after table, beating a rhythm that demanded attention, he made his way to the stage. Once there, he commanded the assembled delegates, urging them to match his drumbeats. The Triathlon Ireland officials, who had helped guide the guests to the many tables suddenly countered his drumbeats with their feet and we were treated to a fine display of Irish dancing.

An amazing start to the evening that was compared once again by the walking encyclopaedia of triathlon facts and figures, John Levinson. With opening speeches from Lochlann Walsh, President of Triathlon Ireland, from Marisol Casado, ITU President and IOC Member and finally by our very own Renato Bertrandi, ETU President, the meal began. 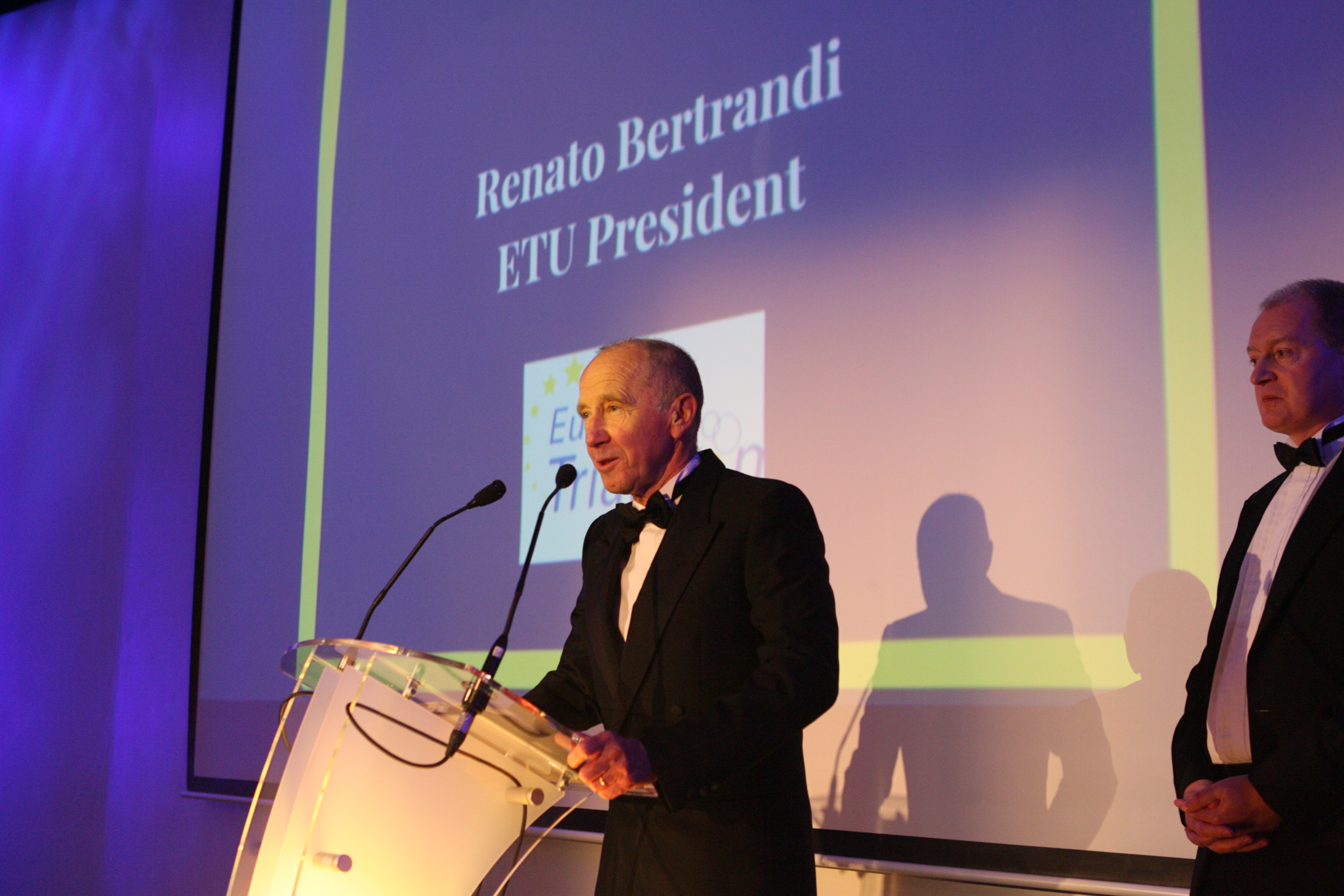 A series of video presentations showed how very inclusive our sport is; with Malcom Harrison, GBR opening the evening with, “I completed my first Triathlon in 1991, the following 25 years I’ve completed everything from Sprint to Ironman, Relays to Tandem Tri and BTF Level1 Coach – well almost everything … I still had not represented GB at age group. 2017 and the target was to qualify for the GB Team at Sprint distance. Everything was looking good, I picked up a few trophies in the 60-64 category, feeling fit and healthy but in April a routine health check up at the doctors included a blood test that showed a PSA 26 (2009 PSA was 1.9). ‘Malcolm – you have prostate cancer’.” The video was heart-breaking as he described his journey to hell and back but he made his battle inspirational. Click here to watch that video and click here to read more about him. 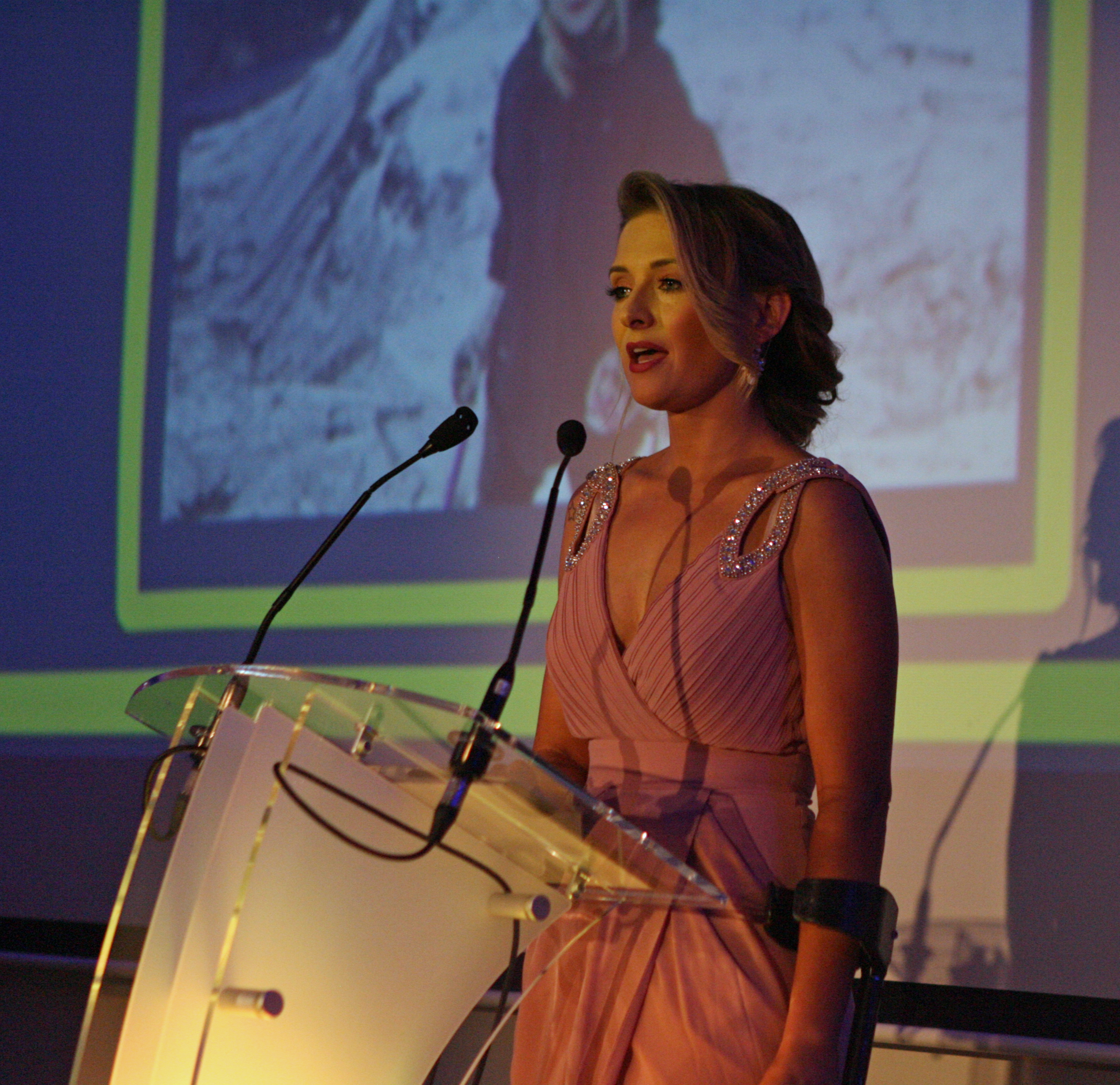 Next up was Nikki Bradley, Adaptive Adventurer and Women’s Participation Lead, Triathlon Ireland. She shared with us her determination, turning challenges into achievements and disappointments into successes. You can read more about this remarkable woman here. It was more than just a celebration of all things ETU. This evening a little bit of history was made as four people stood together. Tom O’Donnell, Marisol Casado and Phillip Schädler have in the past all served as President of ETU. They stood alongside Renato Bertrandi, their leadership of European Triathlon spanning over 30 years.

The evening was all about celebration of our sport and of those who contribute to it. The first award of the evening was for the Emerging/developing National Federation of the year.
Representatives from the nominated nations, Macedonia, Latvia and Serbia were invited up to the stage. The suspense was created by John Levinson’s by now familiar words, “And the winner is ….”         Macedonia! Ivan Mihajlovski, President of the Macedonian National Federation, took the microphone and spoke briefly about the development of athletes, coaches and officials and of course about the great event from last year, scheduled again for 2019, in Ohrid. Make a date in your diaries for the 2019 Ohrid ETU Triathlon Junior European Cup. Amongst the well-established National Federations, there were three nominations: France, Great Britain and Spain. With outstanding performances from Cassandre Beaugrand, Pierre Le Corre and Vincent Luis, with the heavy investment in paratriathlon and domestic events, it was France who celebrated. Without volunteers within our sport, we simply could not survive. Dedicating many hundreds of hours to ensure the safe and fair delivery of an event, the Technical Officials who oversee some of the biggest events on the ETU Calendar come from all walks of life and from all corners of the confederation. Nominations for this award came directly from the ITU Development Committee and it was to be a close call between Mary Clare Bancewicz (GBR), Andreas Galanos (GRE) and Hugh McAtamney (IRL). 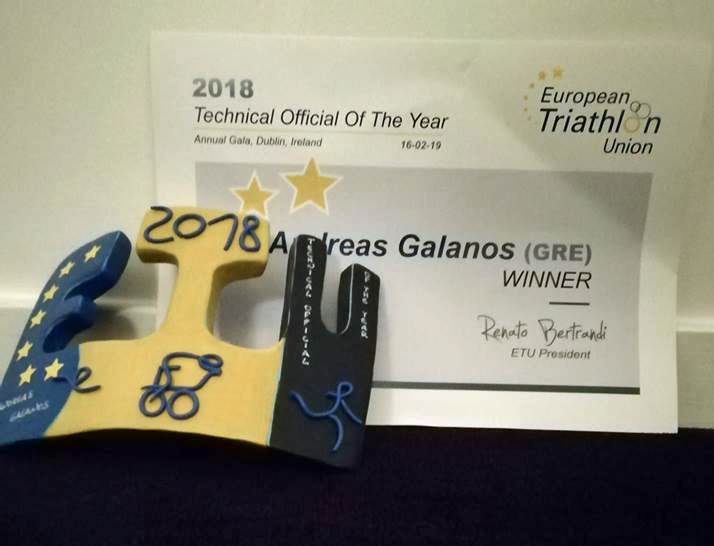 Having been an integral part of the Technical Official family for so many years, the honour went to Andreas Galanos.

For event organisers, the pressure to deliver is immense. With demands from athletes, spectators, TV, city councils and governments increasing, to host a successful event is most certainly not easy. Nominees from Glasgow (GBR), Quarteira (POR), Olsztyn (POL) and Ibiza (ESP) were called up onto the stage. The suspense … looking at John Levinson, who had the answer in the envelope …. And the winner is …. Glasgow.

Sadly none of the nominees were present for the Female athlete of the year award.  With the season just about to start and with athletes either a training camp, or heading to the races, neither Vicky Holland (GBR), Nicola Spirig (SUI) nor Yulia Yelistratova (UKR) could make it.

The winner, Vicky Holland, sent in her video message. Click here to view. Of the male athlete of the year nominees, the biggest cheer of the evening went to Hungary’s Márk Dévay. He had travelled to Dublin, was dressed to kill and was welcomed up onto stage with a rousing applause. Still young and relatively new on the scene, he has been setting the swim alight, even exiting the water ahead of Richard Varga. He was facing the seemingly unstoppable Mario Mola ESP and Pierre Le Corre FRA. Although unable to attend, it was Mario Mola who claimed the title and who sent in his video message from the Canary Islands, where he is putting the finishing touches to his 2019 race preparation. A new category for reward and recognition is that of the Paratriathlete. With women being nominated this year, we were told about Susana Rodríguez (ESP), Elise Marc (FRA) and Liisa Lilja (FIN). The winner, Elise Marc came up to the stage to accept her award and, apologising for her lack of English, fluently thanked the audience … in English!

The final award of the evening was the Executive Board Award. This is given to a person, or persons, or an organisation that has truly made a mark on our sport.

We were treated to an emotion-fuelled video that took our hands and guided us along the pathway that made the most famous triathlon city in the world so good. Without the Márkus Family, this would, could never have happened. We were honoured to have not only Gergely Márkus at the Gala Dinner but also his brother, Balázs and their mother, Judit. Together they came to the stage. Together, the audience rose and gave a rousing welcome to the family that has put triathlon on the world map. The evening coming to an end, it was the ETU Executive Board’s chance to say thank you, safe journey and see you at the next race.

The annual Presidents’ Run saw them blow away the cobwebs around the quiet streets of Dublin, ending up with a photo-shoot on the steps of Trinity College.