Alhandra serves up a great feast of triathlon, Poissy and Alhandra take the golds

The weather was really kind to the athletes in Alhandra, and for the super-sprint format, it was warm enough for a non-wetsuit swim.

Two waves were to be set off for the ETU event, with the Elite starting 3 minutes ahead of the Juniors.

Action would be tight and exciting but the drama started ahead of the race with two athletes failing to attend the Athletes’ Briefing on time. 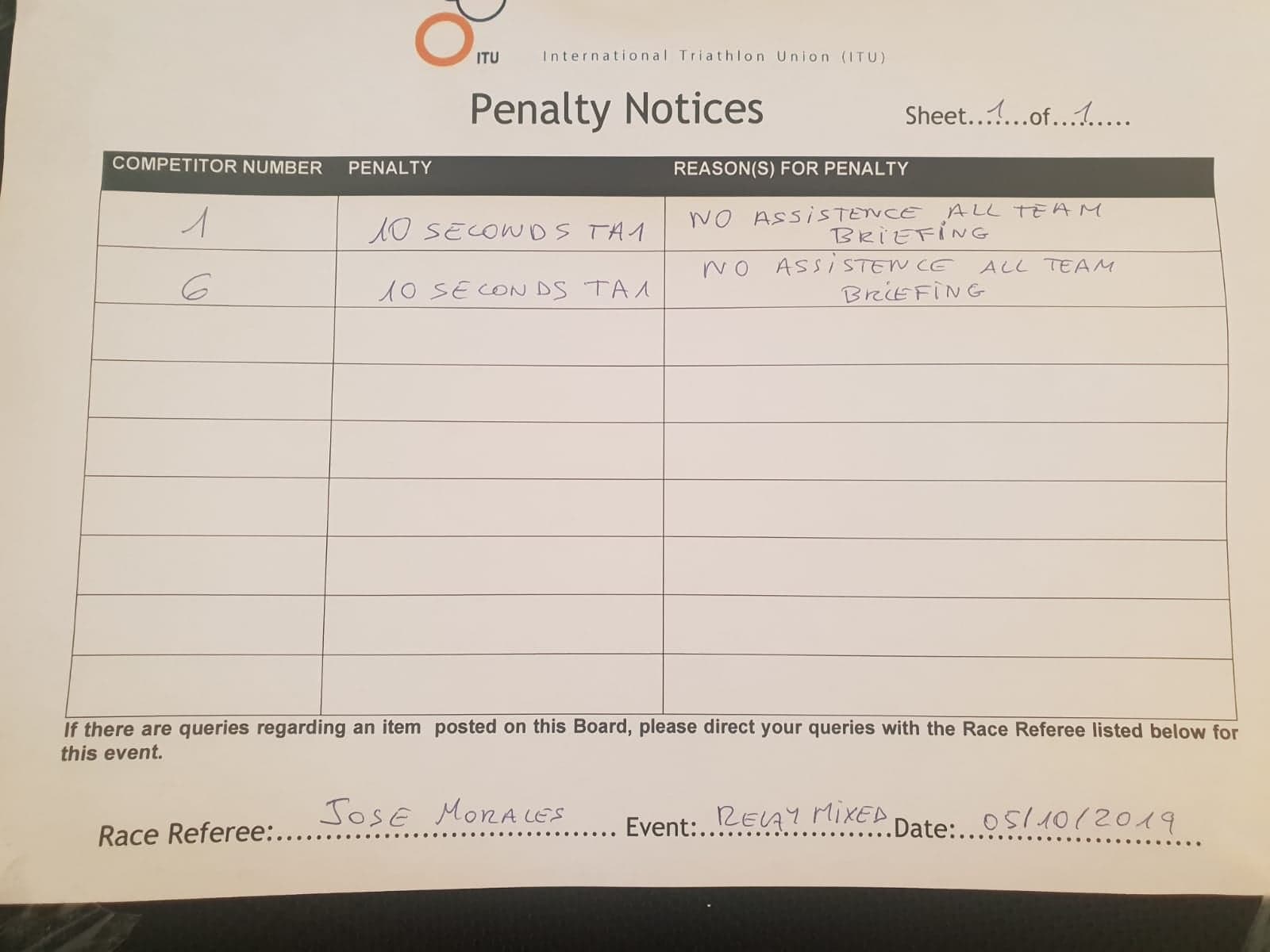 This meant that Poissy Triathlon and Pro Athletes KTT 01 would face a ten second penalty after the swim. For Poissy, winners of both Elite and Junior titles last year, this could potentially be a real handicap. 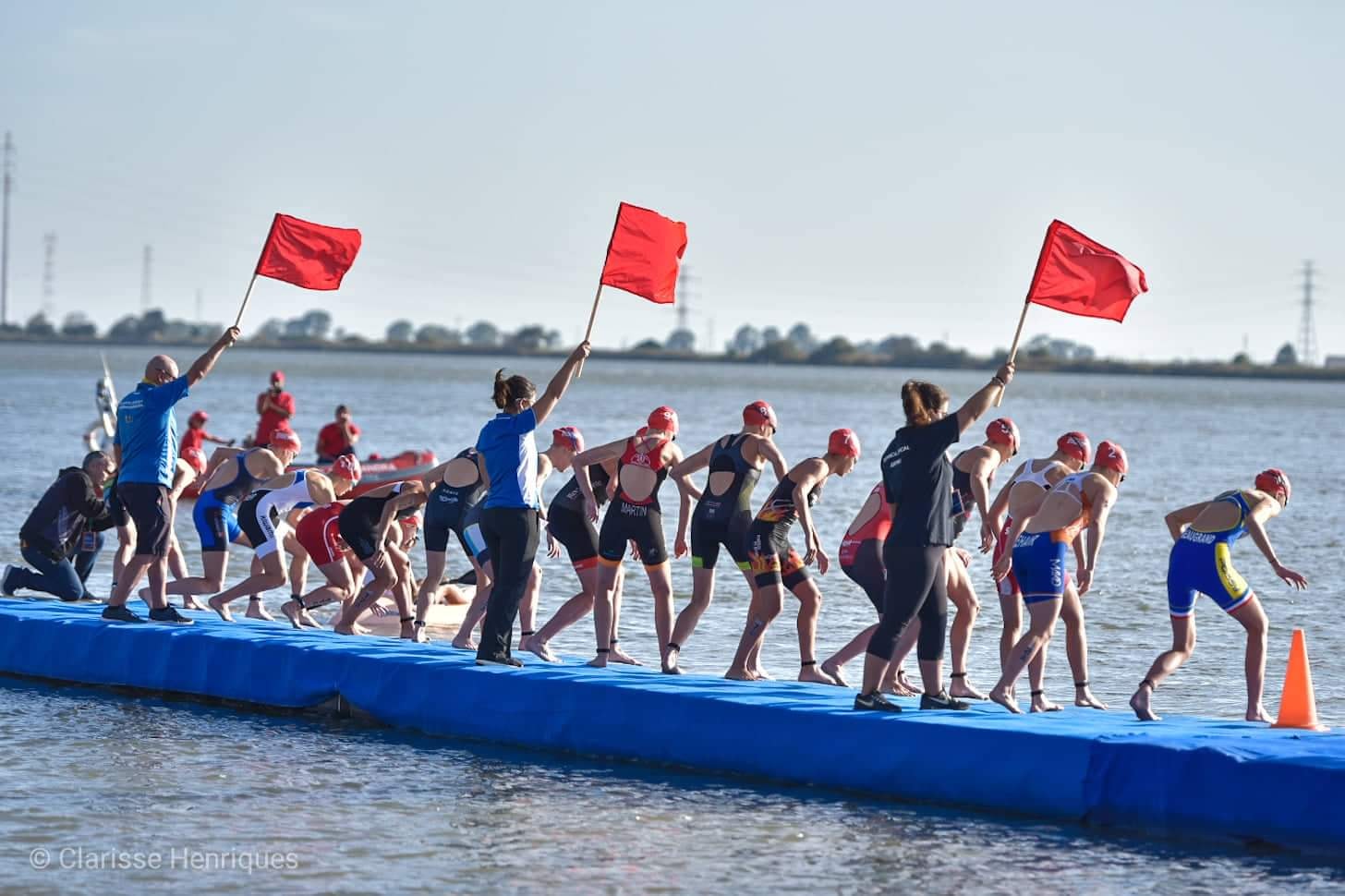 The crowds, already heavy on the swim exit and around the transition area shouted and cheered for their favourite athletes and were treated to a global line-up. For the full team lists, please click this link and then check each team.

Out on the bike and Jeanne Lehair was powering away at the front of the peloton but with Cassandre Beaugrand tucked in behind, the threat was there already. Meißner, Perez, Morier, Feuersinger, all strong athletes, were in the mix.

T2 came quickly, with the pack still together but out on the run and the power of Beaugrand could not be matched. Morier and Santos chased.

Beaugrand handed over to Pujades and by the time he reached the first turn buoy, he was ahead by 6 seconds. Heading into the current, he held the lead all the way back to the swim exit but behind, the chasing athletes were grouping and getting benefit from swimming together.

Pujades kept a keen eye over his shoulder to see where the others were, waiting for a partner to join him so that they could pull away. He was joined by Portugal Talentus in the form of Jonas Schomburg and immediately the pace went up. This was to be a decisive move as the pair established a solid lead.

Pujades stormed out onto the run, holding this lead to hand over to Periault, who would be racing against Chelsea Burns. Out onto the bike an Periault was joined by Burns and Zaferes from Sport Lisboa e Benfica. Just as it looked like the three would use their combined power to create a definitive lead, Burns bike decided to play up. A mechanical problem saw her drop off the back and become a tiny speck in the distance as Poissy and Sport Lisboa e Benfica battled it out at the front.

Zaferes has nothing to prove but behind her, Periault was tucked in well and determined to benefit from the power of the world champion.

A massive lead was created by the pair. Periault made a last surge to the dismount but was shadowed by Zaferes as they left for the lung-busting run. Periault matched the world champion pace for pace, staying wisely on the shoulder of the American.

Heading for the turn point and Zaferes could have been expected to kick. If she did try to up the pace, it failed as Periault tested and teased the American, injecting pace and making the World Champion really work hard. It was only at the very last part of the run that the  Sport Lisboa e Benfica athlete edged ahead to give João Pereira the slimmest of leads against Dorian Coninx.

Sport Lisboa e Benfica and Possiy once more – shoulder to shoulder, pace for pace, to create the most edge of your seat final leg.

A partisan crowd. A determined Poissy – all that you could want for the final showdown.

Coninx a stride ahead as they left the water.

They got to see just how big their lead was some time after the first dead turn. At that point they knew that gold and silver was on the table and that all they had to do was not make any mistakes and trust their legs on the final run.

The technical officials, led by Technical Delegate Pascal Godel (FRA) knew too what was at stake and were getting ready and getting into position to ensure that the dismount and transition area were correctly covered so that no unfair advantage could be gained at the very last moment.

Out on the bike course, with the wind behind them, the Poissy / Sport Lisboa e Benfica train was powering along, building upon their lead and the crowds, back in the transition area were being whipped into a frenzy as the juniors, now being led by Ribeiro, watched their handover and waited in great anticipation for the arrival of Coninx and Pereira.

Out onto the run and the pair were still locked together. Pereira, tall, leaning backwards; Coninx, smaller, leaning into his strides.

Both Poissy teams(Elite and Junior) won the title but last year in down-town Lisbon; a victory over the home favourites. Could the visitors do it again?

Coninx led all the way back from the turn point. Pereira, knowing that he had to visit the Penalty Box could not break away from the Frenchman, who injected pace as they neared the noise of the finish area. He knew that with the ten seconds penalty, the win was his. Pereira, his time served, stormed on to the silver. 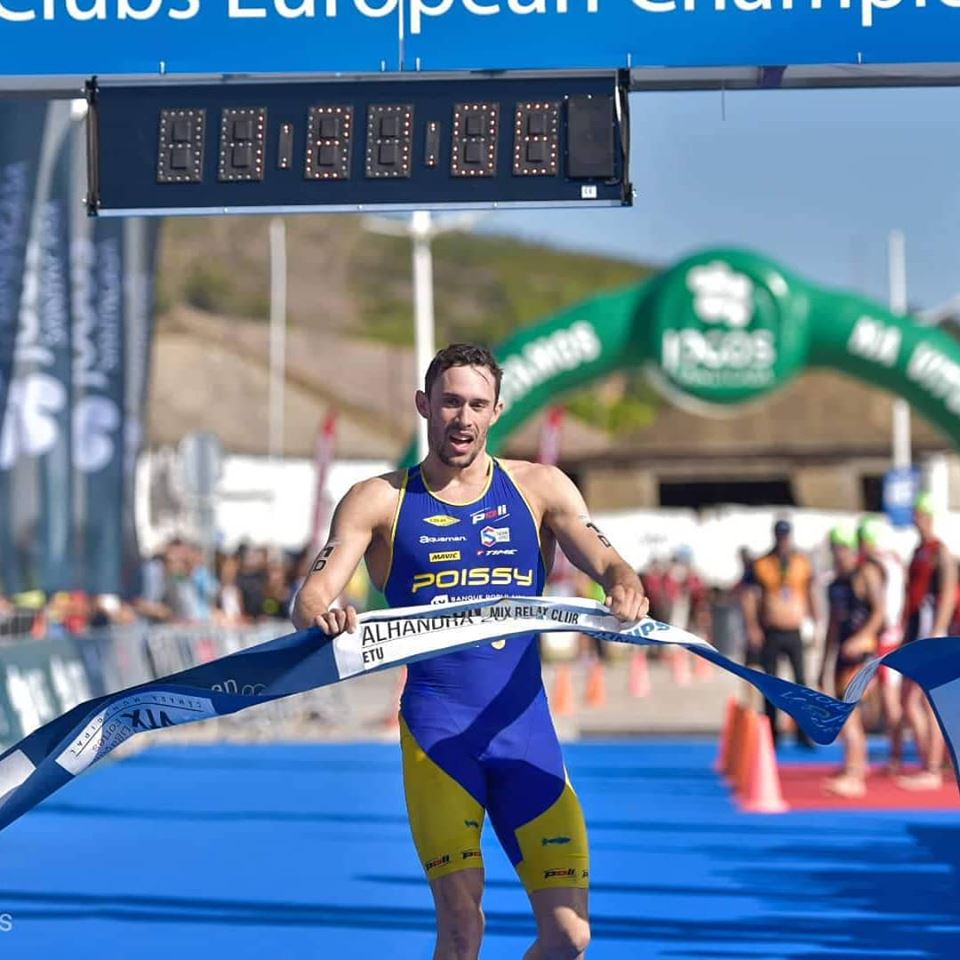 Poissy had done it again, even with the early time penalty. 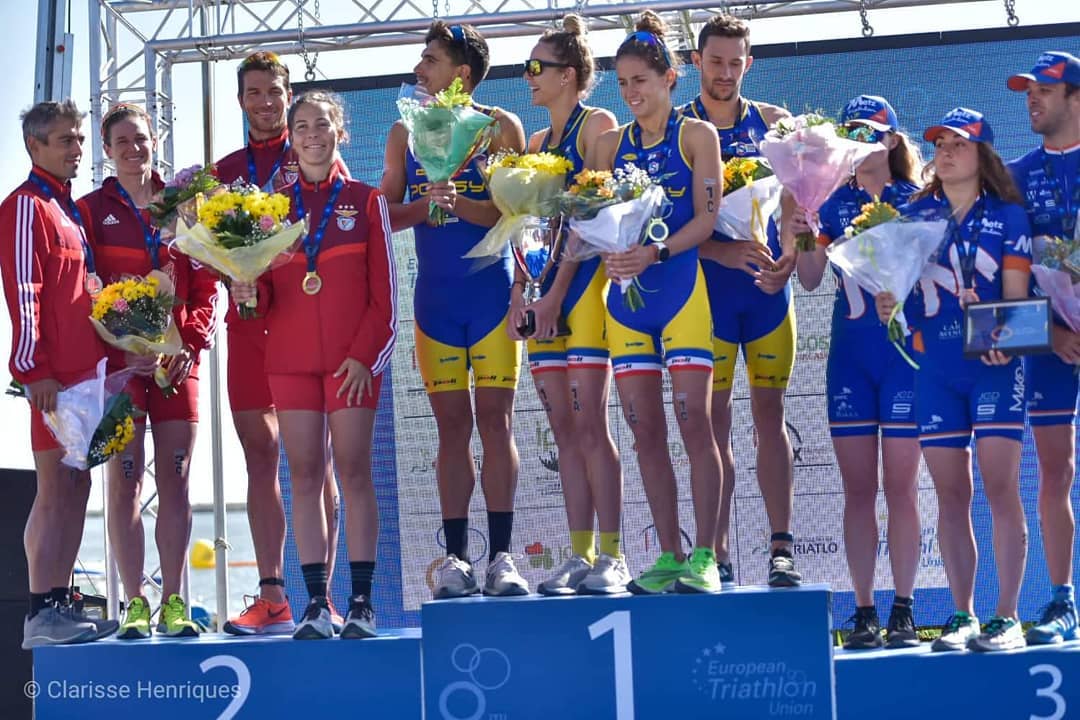 Behind them, the Juniors saw a break-away of two, with Inês Rico, racing for Alhandra Sporting Club, pushing the pace. After T2, it was Rico who was strong enough to  break away on the run and give her teammate the advantage on the handover.

The chase was set by CT Diablillos de Rivas and by the time the third leg was underway, it was these two teams at the head of the race, pushing  hard and building up the lead. Ribeiro, for the home team, was out on the run – leading. The crowds cheering.

The final leg was now underway and it was the same tow teams back together at the front.

It was the run where Alhandra’s Nunes had the greater power and had soon escaped from the Diablillos athlete to take a winning lead. It would only be at the turn point that he could be assured of his place on the top of the podium. He was leading the race. He was going to win for his town and his club. 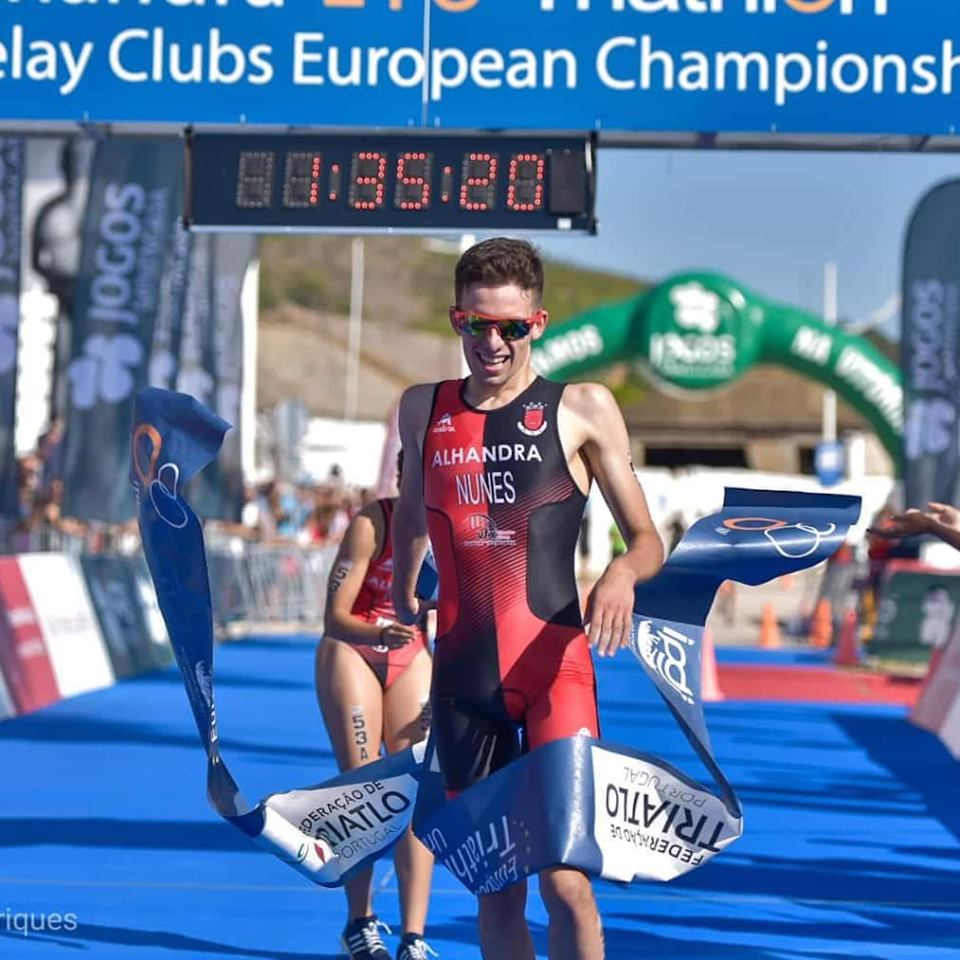 To the delight of the local crowds, it was Alhandra Sporting Club leading the junior race. CT Diablillos de Rivas were looking good for silver but Metz put in a last-minute attack to claim the second place on the podium, with Poissy claiming the final place. 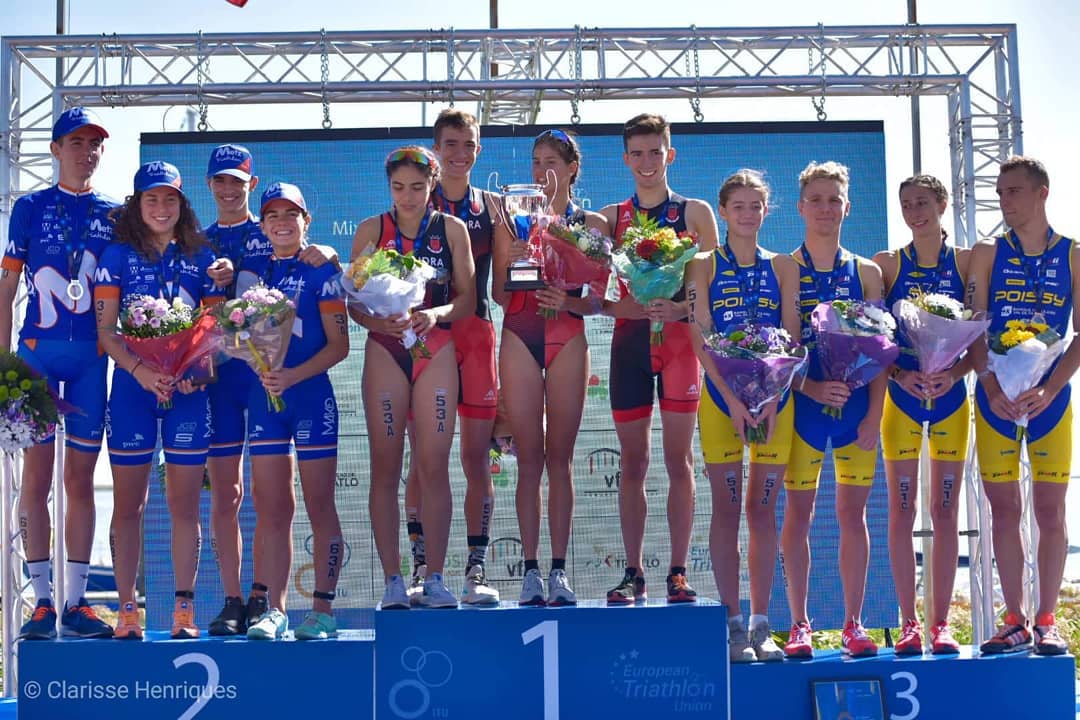 The move to this location was indeed an inspired one. The course is tight and enclosed. Safe for the athletes, easy to manage and created a great atmosphere. The live TV-feed was superb and for the host town, a victory in the Junior race was icing on the cake.

ETU President, Renato Bertrandi said, after the races were finished, “The 2019 edition of the ETU Triathlon Mixed Relay Clubs European Championships has taken this format to a new high. The location is far more suited to hosting such intense racing and the course layout gave athletes a mix of challenges. Seeing the world’s best athletes racing for their clubs adds a fresh element to the mixed relay format and once again, at this race, we have seen just how exciting this format can be.

For Poissy, once again a dominant force, this was a great victory. In fact their third but for the local team, Alhandra Sporting Club and victory in the Junior race, this was a day to remember. I would like to express my thanks to the LOC for putting on such a great event. An day of racing for all categories and a great development opportunity.”

A big thank you to Clarisse Henriques for her images. She is currently editing the remaining photos but will make them available in due course. We will provide a link to them on our ETU Facebook page.

Thanks too, to Renato Bertrandi who kept the Instagram and Facebook pages alive with images and videos he was able to take but above all, thanks to the LOC for the great TV feed.