A magnificent day at the races

With the great news from the IOC that Mixed Team Relay will be an addition to the Olympic schedule in Tokyo still fresh it was a chance for Europe to show the world just how good this format looks.

With an afternoon packed with racing, it was the Juniors who set the pace. With 17 teams racing it was always going to be an exciting event.

A super-sprint format saw the athletes swim just 250m in the Schwarzsee, running some 100m to T1, biking a 2-lap 5k course before running two short laps to make a 1.8k final run.

Having dominated the early stages of the Junior Women’s race, it was Austria’s Theresa Feuersinger who led the way. She was followed by Germany’s Bianca Bogen and it looked as if we might see a repeat of Feuersinger’s power. 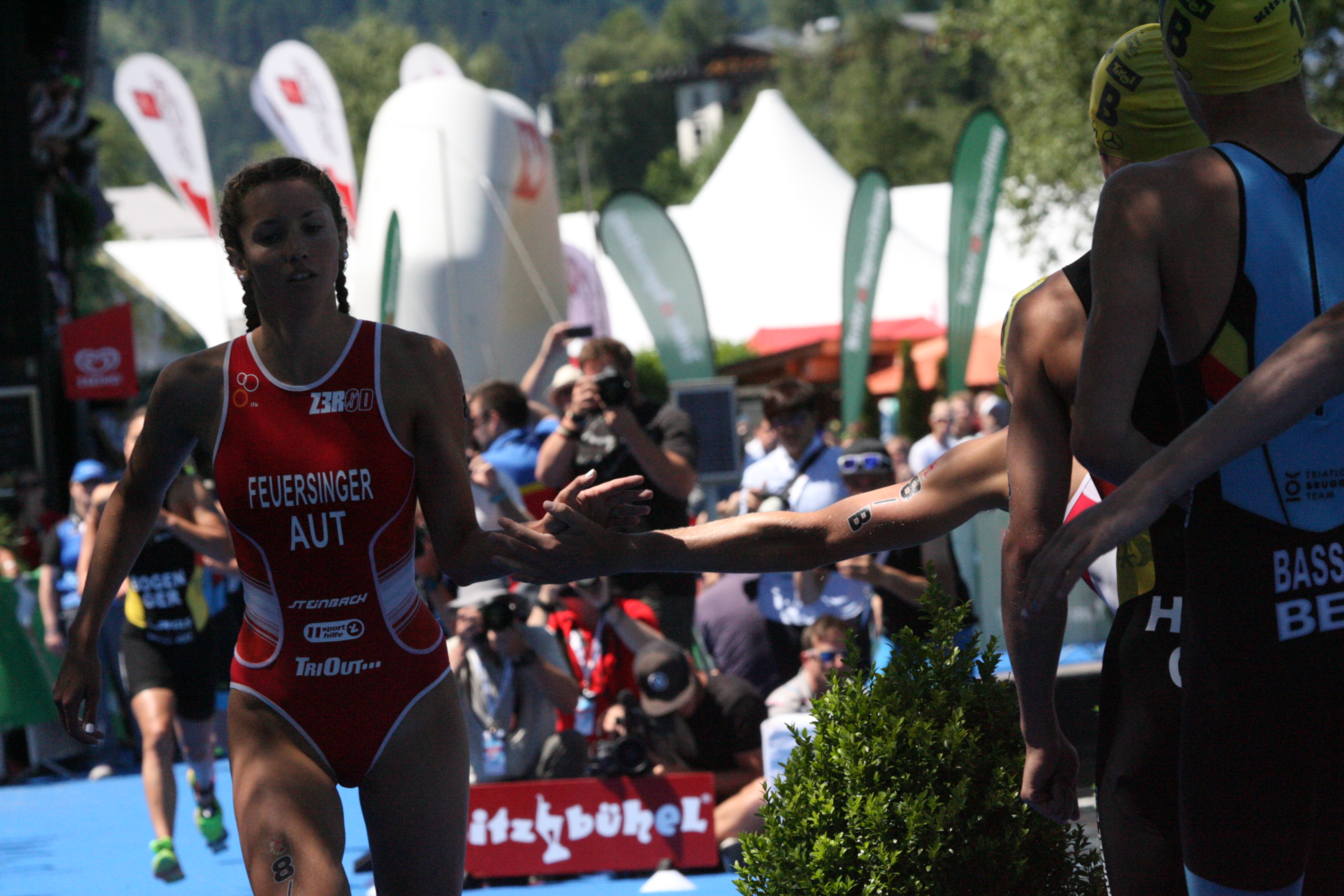 The two of them worked hard on the bike but the Austrian delighted the crowds by kicking on the run and establishing a great lead as she handed over to Tjebbe Kaindl. He was up against Germany’s Moritz Horn who had swum so well in the race on Saturday and who soon overtook the Austrian to lead out into T1.

The pair pushed on the bike and by the time the handover had taken place, Nina Eim was in a good position. Behind her though it was Hungary’s Dorka Putnóczki who swam well to catch up and now, on the bike, it was at the far turn point that Eim slipped and crashed. 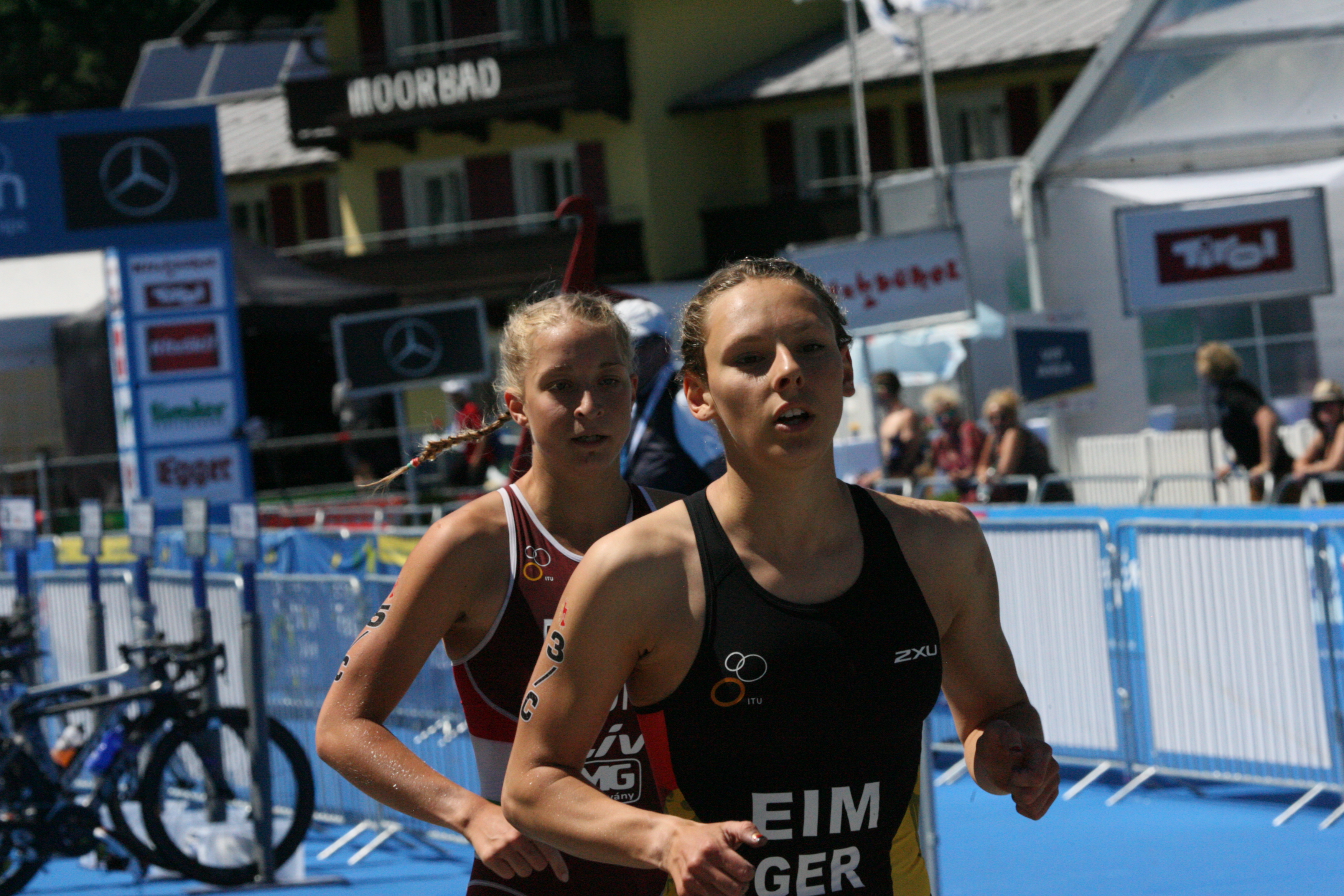 She lost valuable seconds and it was all that Putnóczki needed. Her run out from T2 was fast and she pulled away further to hand over to Csongor Lehmann Junior Bronze medal winner from Saturday. 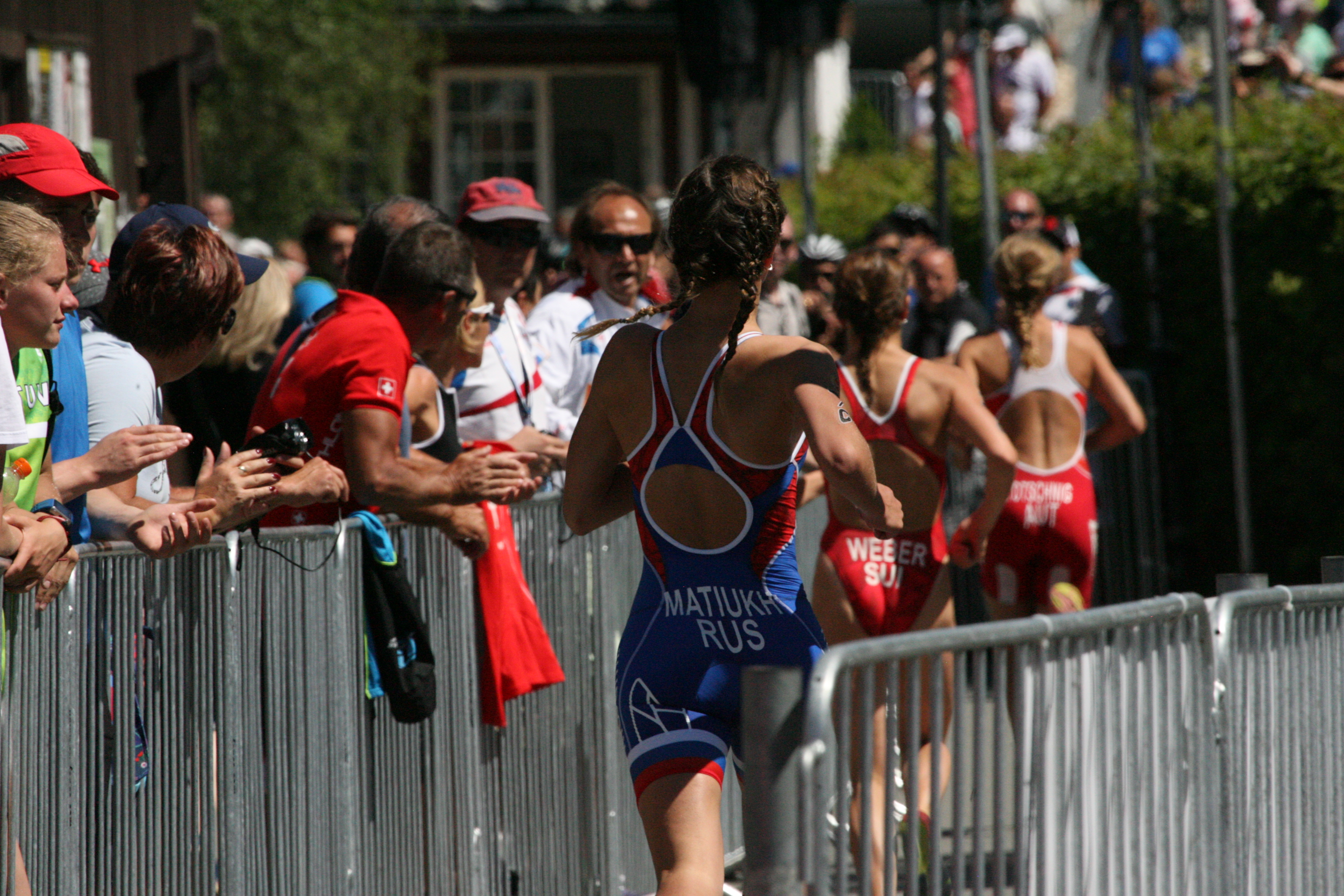 Russia’s Ekaterina Matiukh was having a fantastic race and she pulled the Russian team back into contention for a podium place. 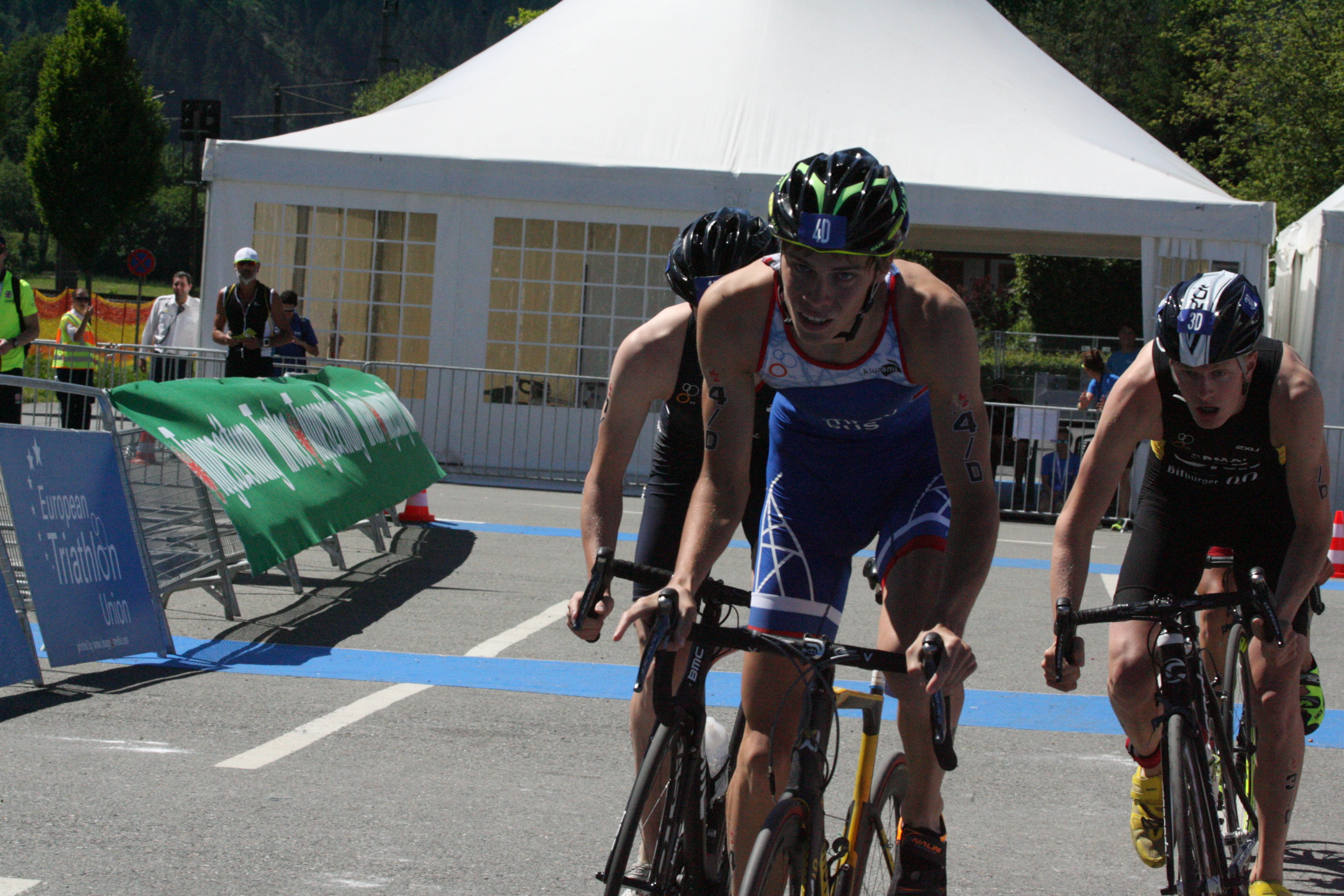 As she handed over to Grigory Antipov it was certain that the crowds would be treated to a thrilling finale. 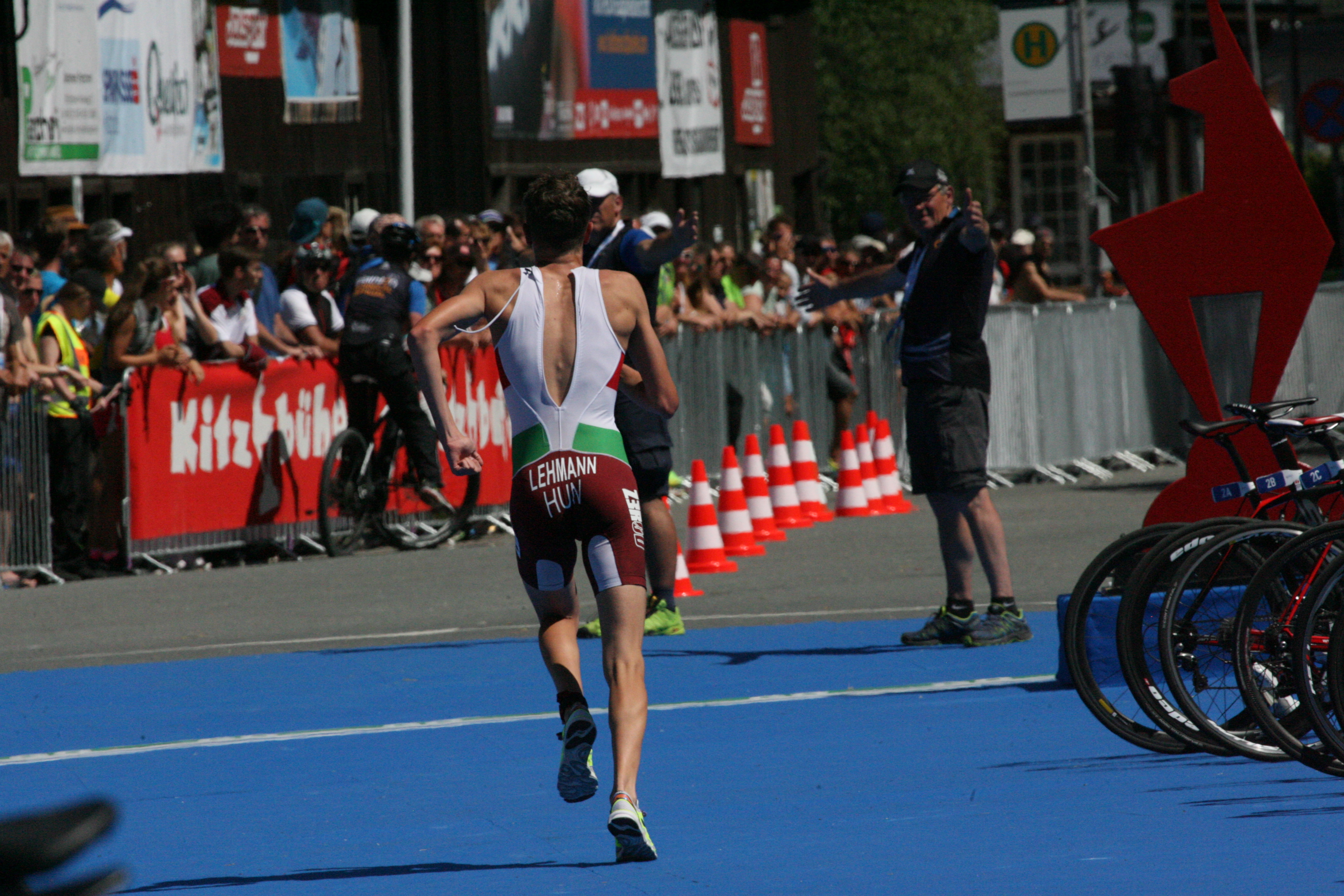 Lehmann was in control and he was successful in turning bronze into gold as he crossed the finish line with Antipov posting a 5:29 for the final run to take silver. Germany, so unlucky with the crash, came home with bronze as Tim Siepmann. The athletes filling the finish line to welcome home their teammates were buzzing with excitement as much as the crowds – if ever there was a moment that “sold” a sport, then this was it.

Could it get any better for the men?

Well, with 12 teams racing and amongst the athletes, several Olympians, the show was on. 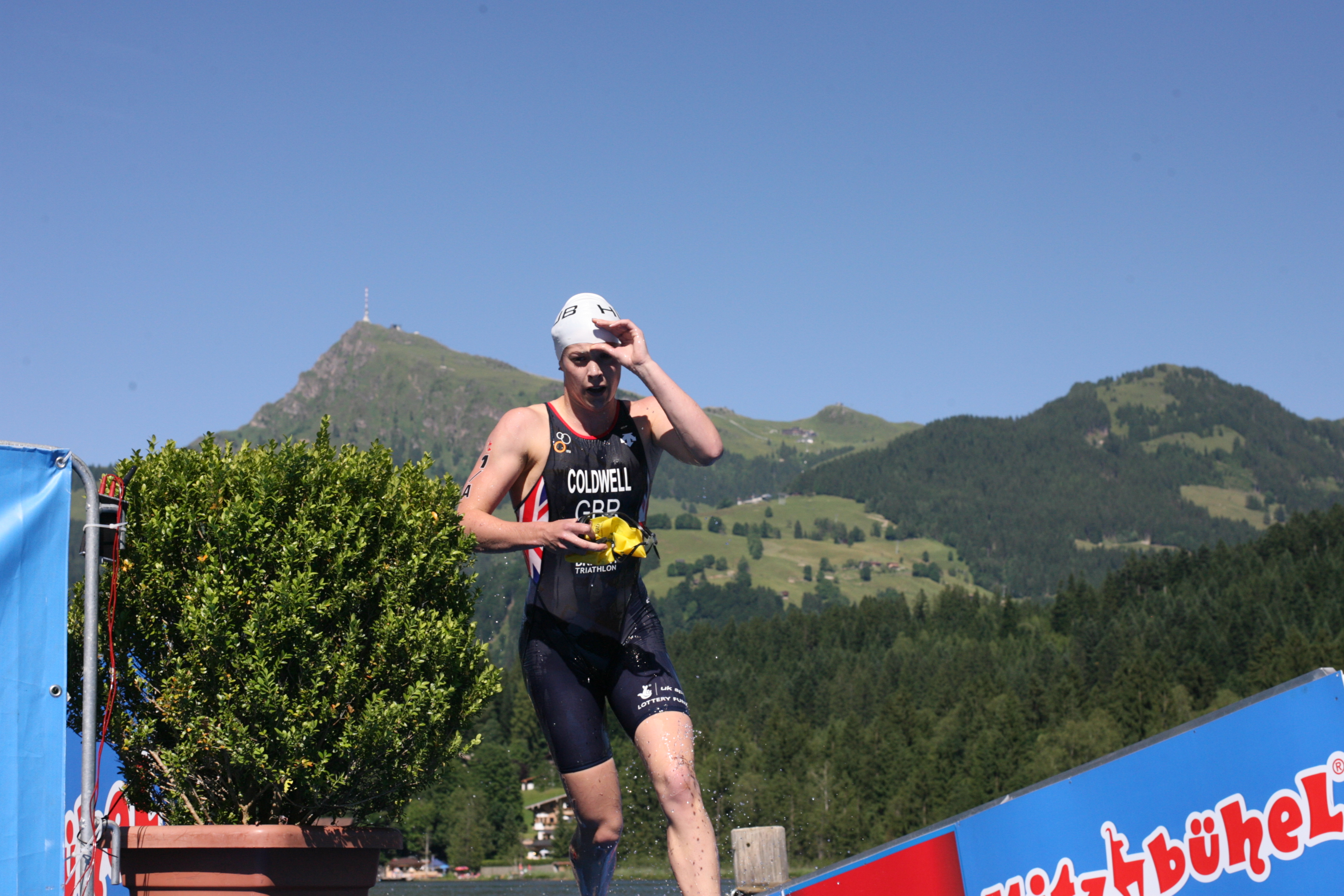 With Great Britain’s Sophie Coldwell setting off on the first leg and with Russia’s Anastasia Gorbunova, who was second out of the water on Friday, it was going to be a fast first leg.
Fast it was and Coldwell led Gorbunova out of the water. A couple of steps behind was French super runner, Cassandre Beaugrand. 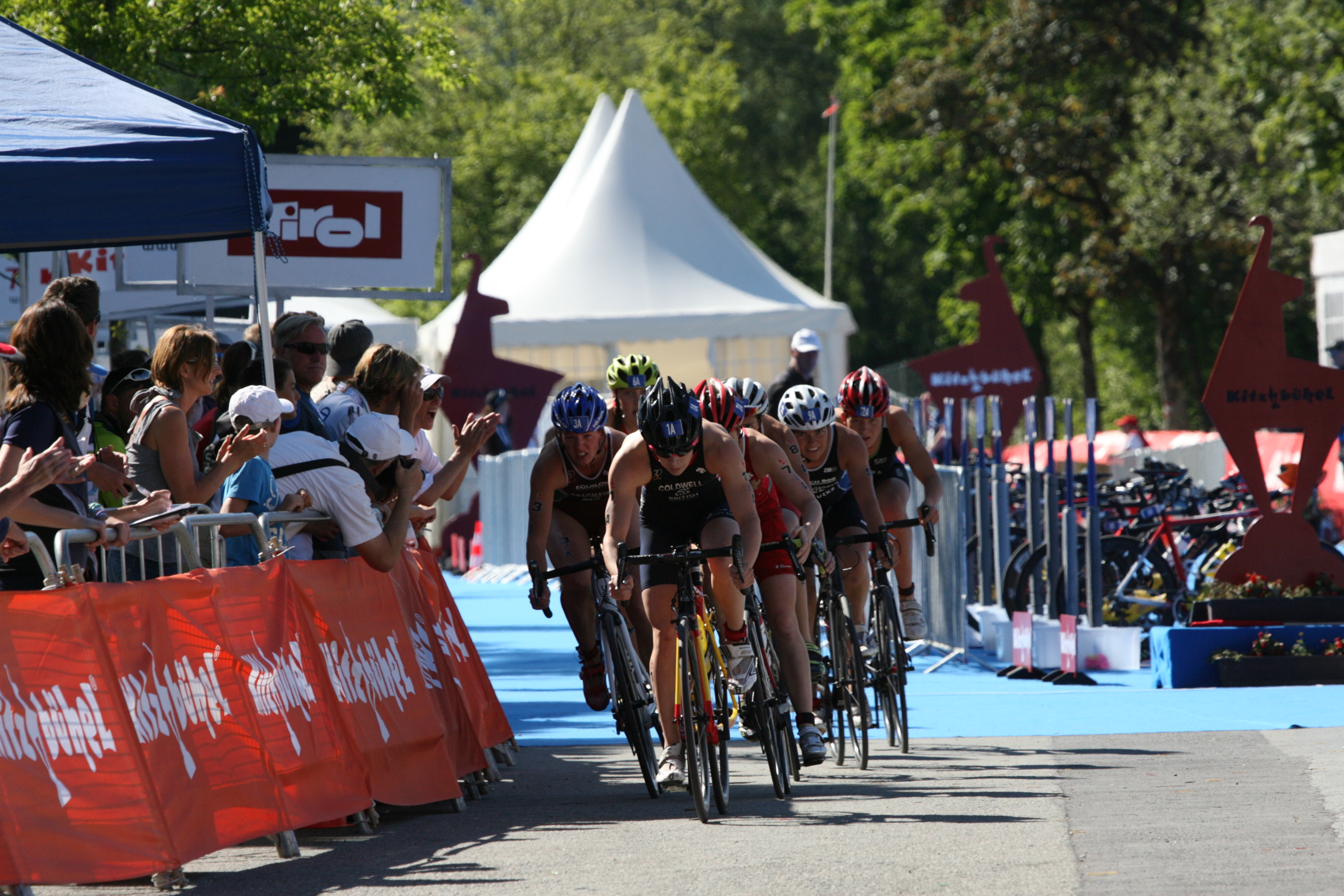 As the athletes came back into view after one lap of the bike, it was a large peloton, led by Coldwell. The 5k bike may have given Beaugrand some protection because once the run started she simply accelerated through the field. 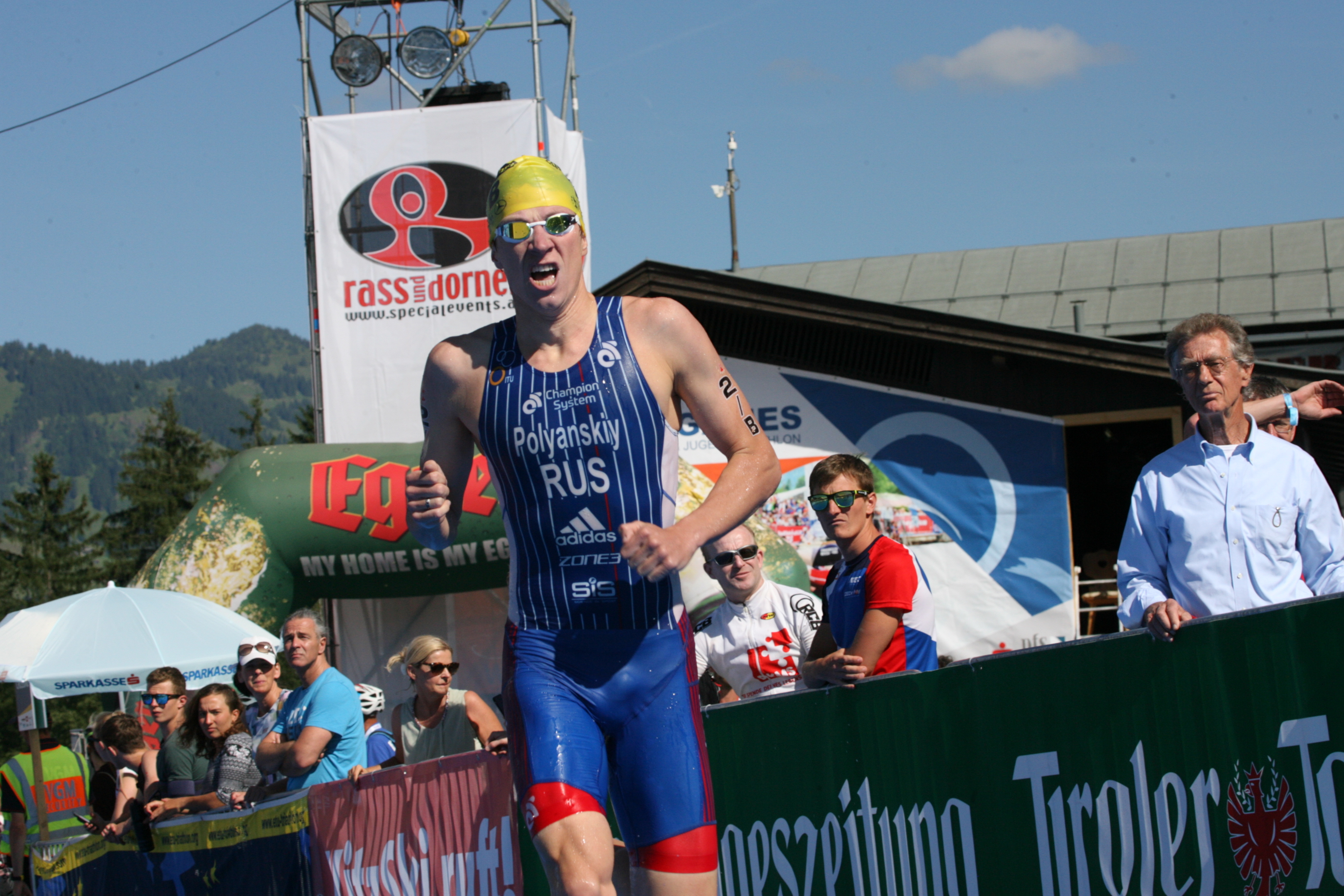 Russia’s Dmitry Polyanskiy sped off the bike without his running shoes and although the tactic worked well for speed in T2, he lost ground to Andreas Schilling and Simon Viain, allowing Denmark and France to get the advantage. 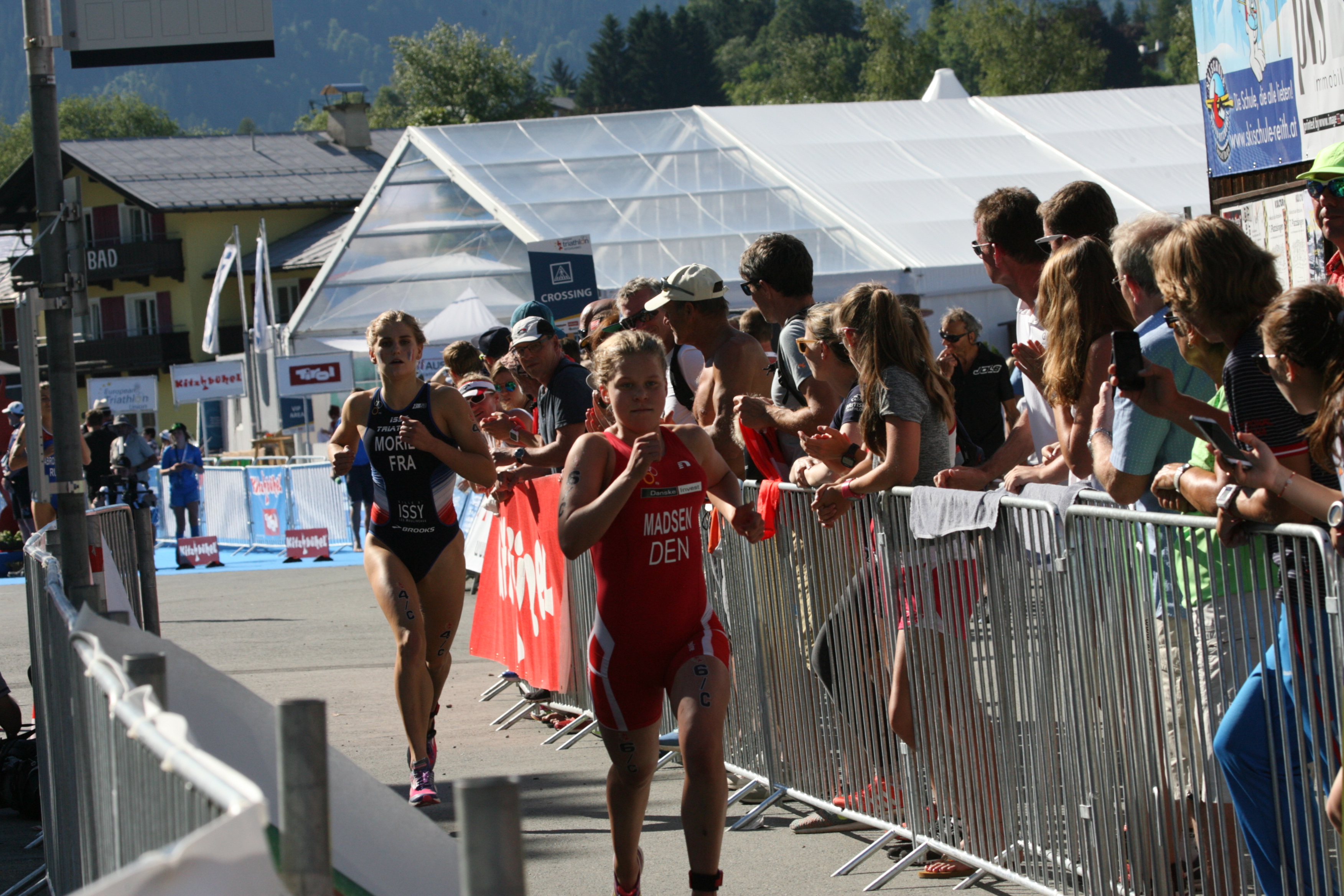 The key moment of the race came with Sif Bendix Madsen DEN as she powered her way around the bike and then burst out on the run to create a clear lead for the Danish Team. As she handed over to Emil Deleuran Hansen he had a clear advantage and he did everything to keep ahead of the chasing French/Russian train of Raphael Montoya and Vladimir Turbaevskiy. 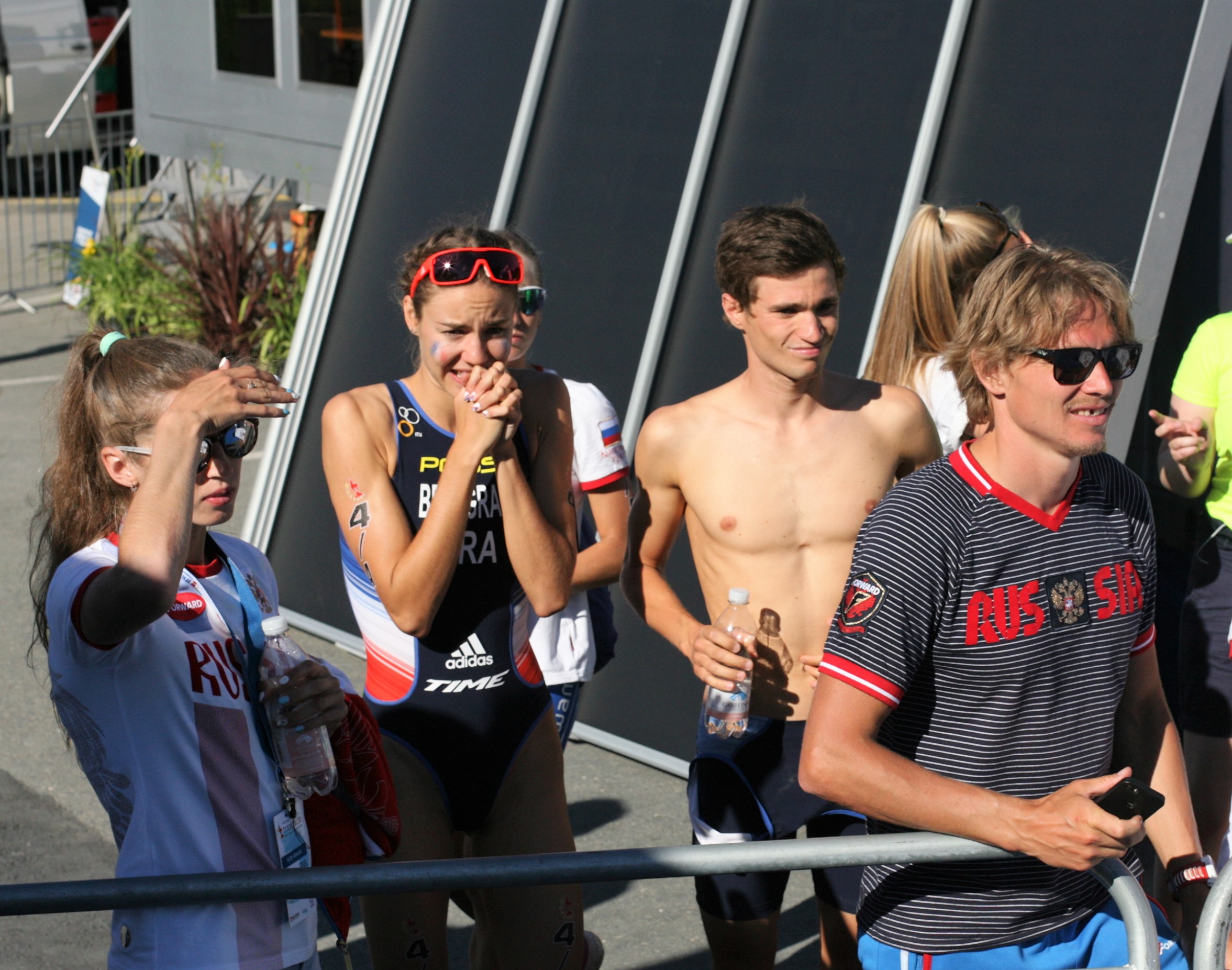 It seemed impossible for the young Dane to keep ahead of these two immensely experienced athletes but he did just that. 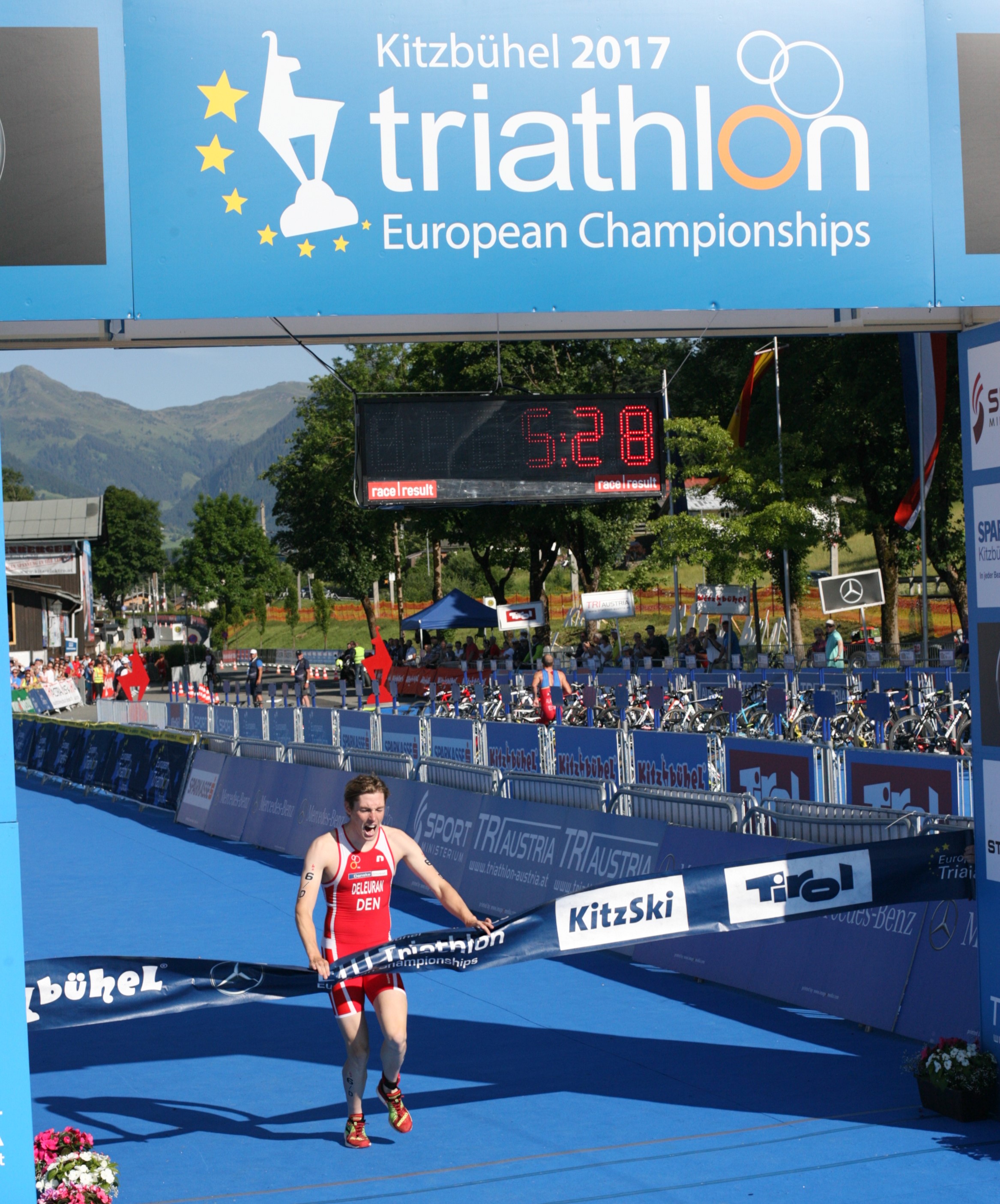 To the cheering crowds and to the delight of the Danish coach, Michael Krüger, Deleuran crossed the line to secure the title for Denmark. Behind him Montoya had just enough pace to keep ahead of Turbaevskiy, who settled for bronze and who was able almost immediately to send a message to his wife, who is so very close to becoming a Mum. 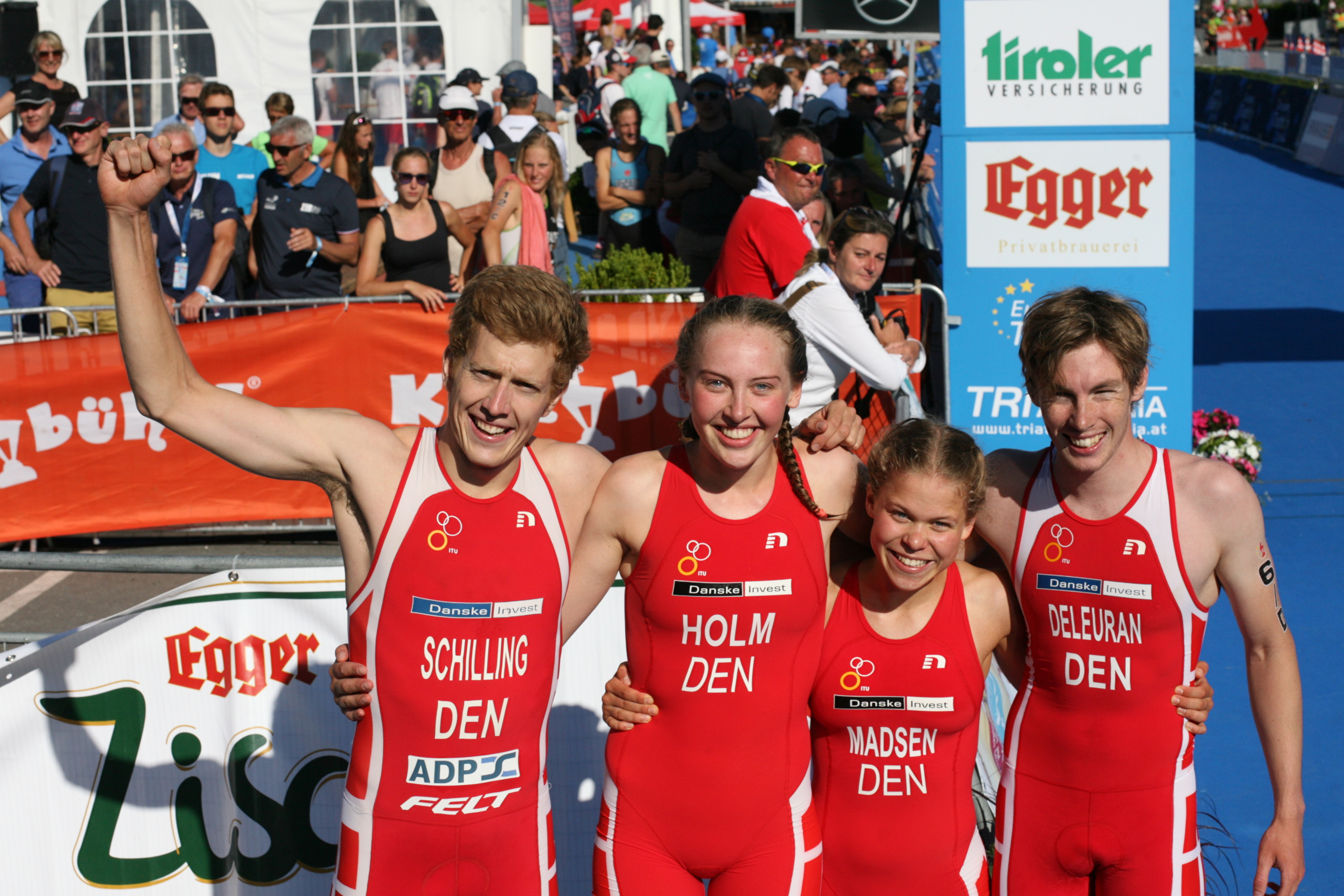 An electrifying race from start to finish. Fast-paced, thrilling and here in the heart of Europe at the 2017 Mercedes Benz ETU Triathlon European Championships, Kitzbühel. 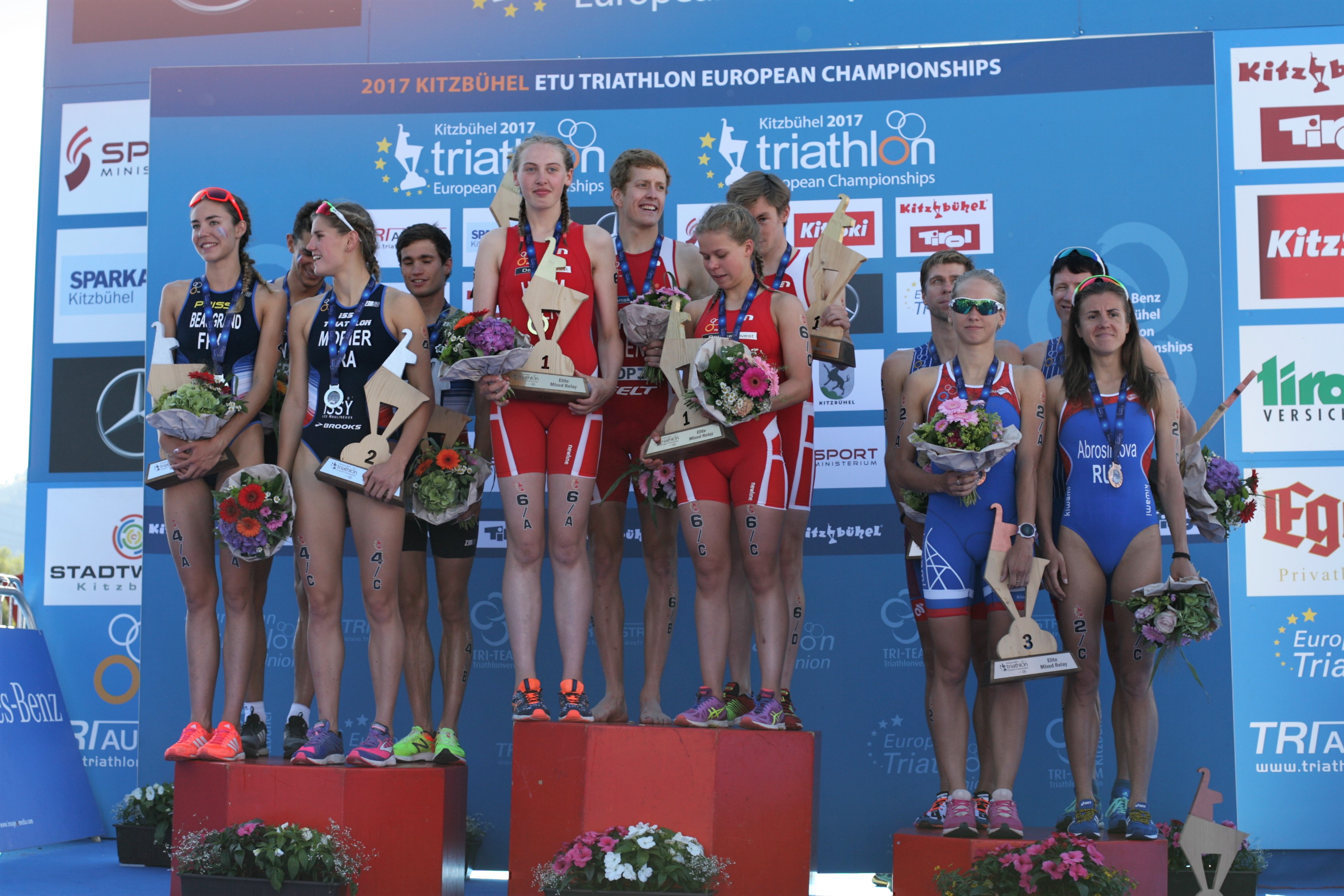 ETU President, Renato Bertrandi said, after the event, “I am have today the true privilege of witnessing two races that have seen the athletes in both the Junior and the Elite categories, racing to the very limit. It was fast, it was exciting, the positions changed as the race unfolded and it was really, today in Kitzbühel a confirmation that this format of racing is perfect for the Olympic Schedule.”

ITU’s Senior Sport Director, Gergely Markus explained to the spectators that the process of getting this format of racing into the Olympics in Tokyo had been successful with a series of showcase events convincing the IOC that Mixed Team Relays deserved to be on the Olympic Programme.